Many cities and countries have already taken action against 5G deployment by banning it, filing lawsuits, issuing moratoriums, passing ordinances and resolutions (see 1, 2, 3, 4, 5, 6. 7. 8).  Since 2018, there have been reports of people and animals becoming sick after it was turned on (see 1. 2, 3, 4). 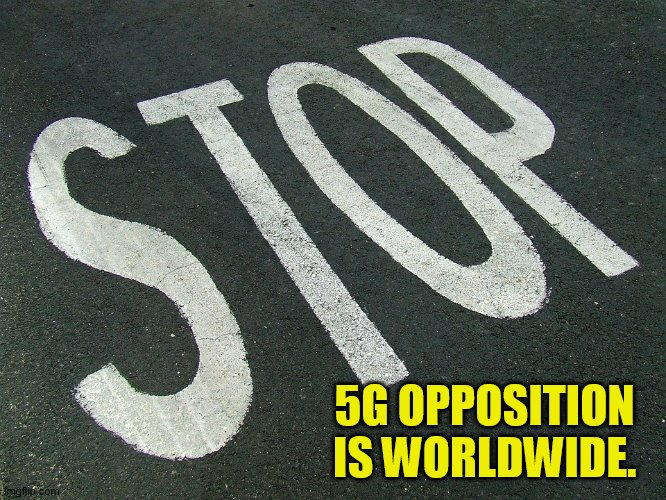 Of course it’s not just 5G that is harmful.  All sources of Electromagnetic Radiation (aka “Electrosmog”) is biologically and environmentally harmful.  This includes Bluetooth, cell phone and WiFi radiation.  Health experts have been warning about exposure risks for many years and continue to do so (see 1, 2).  This includes the World Health Organization and American Academy of Pediatrics.  Even Dr. Oz has warned about exposure!

Kudos to these Canadians for appealing to their government to stop 5G deployment and invest in safer wired connections instead.

Appeal to the Government of Canada “Look Before We Leap”

Ottawa: Scientists and citizens groups from across Canada are
demanding the right to say “No” to 5G in their neighbourhoods. Twenty
four Canadian groups are banding together and appealing to the Trudeau
government for a national moratorium on 5G roll out, until questions
about its human health effects are resolved.

“This has nothing to do with Covid-19. All groups
launching this Appeal condemn acts of violence such as burning antenna
towers” said one of the organizers. “The Parliamentary Health Committee
has been investigating the negative health impacts of cell phones, cell
towers and Wi-Fi for over a decade. So far the only assurance that it’s
safe comes from the wireless companies profiting from it, but scientists
disagree.”

“Health Canada’s 2015 guidelines for human exposure to non-ionizing
radiation (Safety Code 6) were out of date before they were published,
and the review process was flawed,” said Dr. Meg Sears, PhD, Chair of
Ottawa based Prevent Cancer Now, one of the signatory groups.
“Hundreds of peer-reviewed, published studies show that radiofrequency
(RF) radiation can cause cancers, damage sperm and DNA, impair
reproduction, learning and memory, and more. We should be limiting
public exposure, not increasing it.”

“We have sufficient data to classify RF radiation as a Group 1, known
human carcinogen, along with, for example, asbestos and tobacco smoke,”
states Dr. Anthony Miller MD, Professor Emeritus of the Dalla Lana
School of Public Health, University of Toronto, who worked with the
International Agency for Research on Cancer on the 2011 scientific
review. Dr. Miller is a signatory to the appeal.

The groups from across Canada have joined forces to request that
Health Canada engage broadly and complete, for the first time, a
comprehensive and rigorous assessment of effects of RF radiation on the
health of Canadians.

Numerous 4G and 5G micro-cell antennae are appearing in
neighbourhoods with no prior notice, some even being mounted on utility
poles close to the bedroom windows of children. Such a disregard for the
potential health consequences is definitely unCanadian.

“The proponents would prefer that we hear only about the up-side –
the additional billions in purported revenues from 5G – but there is
little recognition of the increased costs,” said Frank Clegg, former
President of Microsoft Canada and CEO of Canadians For Safe Technology.

“Canadians deserve a full economic analysis including the unspoken
increased costs to our healthcare system, which is particularly stressed
right now. Also the lost productivity from adverse health effects;
security and privacy breaches; increased energy consumption; damage to
the environment; and risks to safety and property should be included. We
are living in a different world than we were three months ago, and this
is a standard cost-benefit analysis that might open the eyes of the
public that is paying for it,” said Clegg.

Jean Hudon of the Quebec based campaign Stoppons la 5G summarizes,
“Canadians are asking the Government of Canada to place a moratorium on
the 5G spectrum auctions as well as the rollout of small cell antennas
until Safety Code 6 is updated and the full economic assessment is
completed. Current federal funding should be devoted to a robust fibre
optic infrastructure, which has zero negative health impacts.”

The Appeal requests that Ottawa give local governments and their
citizens proper notification and grant them a decisive say over the
placement of cell towers and small cell antennas.

Activist Post reports regularly about 5G and other unsafe technology.  For more information, visit our archives and the following websites:

Provide, Protect and Profit from what’s coming! Get a free issue of Counter Markets today.

This is a country that works... it should be stopped un canada and every part of the world for now till they can ensure the safety of the 5G connection.. Wonderful job @activist post

Thanks for this post! Keep on!
Awesome, the former Microsoft guy... i heard him already.
And he just said what i saw in my (until now only short) patent research, that
the millimeter wave technology can be found in the weapon classification...!?
(Crowd control...)
Hello!!?
I am all wired up, and only plug in the wifi for 5 minutes to check whatsapp, or better telegram.
Plus i got shungites on my phone , home and i also wear them together with other crystals ;)
And you can put your cell phone on flight mode when it's close to the body...

The problem is the technology is been forced on the human beings even if it's not safe. But if one country will do it, the others will follow it for sure just because of FOMO.