arseniclullaby (66)in #comics • 6 months ago

You may or may not know, depending how you found Arsenic Lullaby, that Diamond Comic Distribution is for all intents and purposes the only comic book distributor in the U.S. (With apologies to all the other fish in the pond, I'm sure they understand that reality). The entire industry in the U.S. is reliant on this entity.

And Diamond Comics has stopped shipping books and stopped payments to vendors...until...I dunno...some state of normalcy returns I guess. They don't know exactly, and I can't say I blame them. They have a hell of a quagmire in front of them. The fact remains that this one entity halting business, means business is halted. Publishers cannot ship books or get paid ( this includes Marvel and DC) and stores cannot get new product to sell.

That's what you call "not good".

I've been trying to get people to understand for a year and a half how fragile the comic book industry is...although, since I didn't include a pandemic in the reasons to be concerned, I'll not spike the football on this one. Even a month off could erase a large percentage of this industry, most stores operate on slim margins, most publishers that operate on slim margins.

As for the big 2 ( Marvel and DC) I have a sinking feeling that this could be the excuse their parent companies use to just say "f*ck it". They are both owned by companies so large and profitable that the revenue from the comic book publishing is beneath there notice and having to even have them on a ledger might just be an annoyance . This would be one way for them to end the publishing wing, along with all it's aggravation, without much public backlash, as it would just be considered one more victim of the ugly situation.

Indy publishers, and even some indy readers might cheer "let it all burn down, we don't need 'em". I would call that shirt sighted and thinking small, for many reasons that I don't have time to explain. Just understand this basic fact, the more people read comics and the more places people can go to get them, the better for all of us. Yes?

Okay...so now that everyone is up to speed on the field in front of us, what can any of us do about it?

A lot, actually. Being that I have been the most pessimistic of the herd on the likely hood comics survive, you can take encouragement that I see some ways out of this mess.

There's other methods of distribution being talked about, comic buying apps, more stores using direct purchase from publishers, expanding online sales, digital sales...that is all well and good and important to sort out, but there is a more profound and urgent matter...

All of what is being disused is inconsequential unless people give a f*ck about comics.

The present threat or opportunity in front of us is this- the entire country in a state of lockdown and thus all normalcy and habits blunted. What needs to be avoided at all costs is people forgetting they ever gave a damn about comics. Buying comics is in many cases a habit, especially when you talk about going to a comic book store. It becomes part of the weekly routine. Even those who don't go to stores directly know when new comic book day is, and much digital publishing follows a similar pattern That routine is absent right now.

There are also no Comic Book movies coming out, and who knows when the next one will be or what the fate is of any of them that were in production. Going to get comics out of habit is gone, being reminded they exist through the pop culture is stymied.

Any industry will tell you that people slipping out of habit of buying your wares, losing the position of being on peoples minds regularly, that is certain death.

That is the immediate enemy here.

Well...here is the bright side, ghoulish as it is, those readers and every one else...is stuck at home. And they are going to burn through their netflix list fast. They are going to tire of news fast, they are going to tire of meme's, arguing, and whoever they are living with. While I usually balk at the idea of promoting the comic book medium through nostalgia or for the tactile difference between holding a book in your hands and watching a movie...this is an instance where those things can be game changing enticements.

A little reminder of the simple charm of a comic book could be very comforting.

(stay with me stores...how you benefit is coming. I assure you I want you all to stay in business, and that the point of this whole blog is to serve that end)

As for the not so tactile digital end of things...

You know the phrase "the enemy of my enemy is my friend"...well you comic book stores out there should consider that for the immediate time being, digital comics are your friend. Because you both have the same enemy. 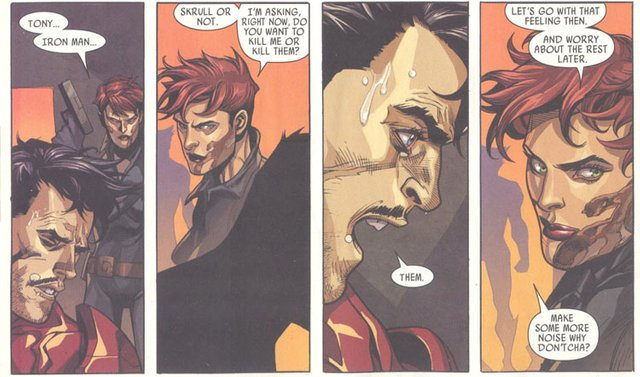 Anything that anyone does that reminds anyone why comics are good works in your favor right now. That includes digital comics being sold...because, like I said, once this is over the last thing people are going to want to do is read anything on a screen.

Anyone who wants a comic book industry in three months, would be serving it well by posting often about comics. And I mean more than "here's a cool cover". I mean, personal stuff, books and story lines you remember...and why they stuck with you. New stuff that you like and why. Stuff you are ordering online and why. What artists you like and why. You don't have to write thesis, just personalize it a bit. There's a comic book in your collection right now that was the one that got you hooked. That is a story worth telling. That is a story people would like to see...especially people who's newsfeed is full of panic.

If you're a pro, explain your first work, or your latest, something you're proud of and why...or hell, something you think you botched!

Talk about, post about, explain what is great about comics. You have enthusiasm for this medium, share that. "Human joy is precious" and that is as painfully true now as ever. Comics bring you joy...share that, share why. It could be because the comic itself is compelling, it could be because it reminds you of your Dad. (You ain't just helping the industry here, by the way, people are going to be losing this minds soon...and a little light in the darkness will help)

Assuming this ends, there are a few things I am sure off-

If those last three things don't scream "comic book reader" I don't know what does.

I'm being factitious about that conclusion but those things being likely could very well mean a whole lot of people going to comic book stores.

What people do, seek out for entertainment after this is over... is up for grabs.

That means whatever stays in their heads or gets them through this could wind up in a very enviable position once the gates open up. 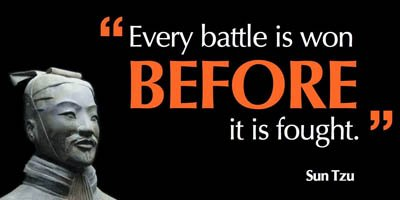 You want a comic book industry at the end of this year? Fight for it. and as a strange twist this industry could do more that just survive, it come out of the fight in much better shape than it went in.

here's a couple of examples of stuff I've posted here and there...not saying "do it like this" and "this is how you get through to people" or anything like that...I'm just leaving them below in case you need a little bit of a idea of wtf "post about comics" might mean. or just want an idea to go on. 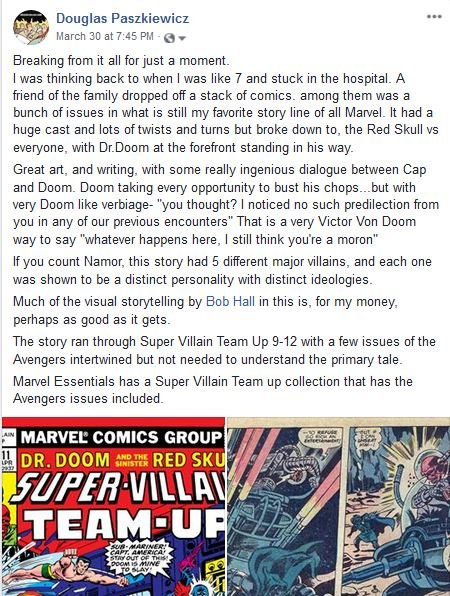 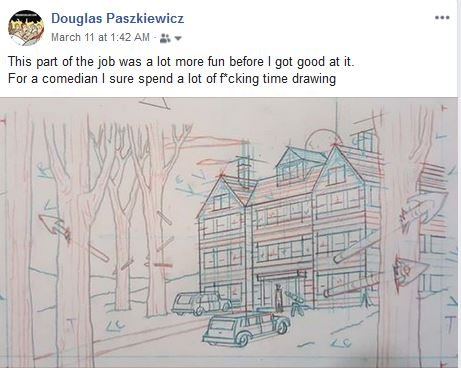 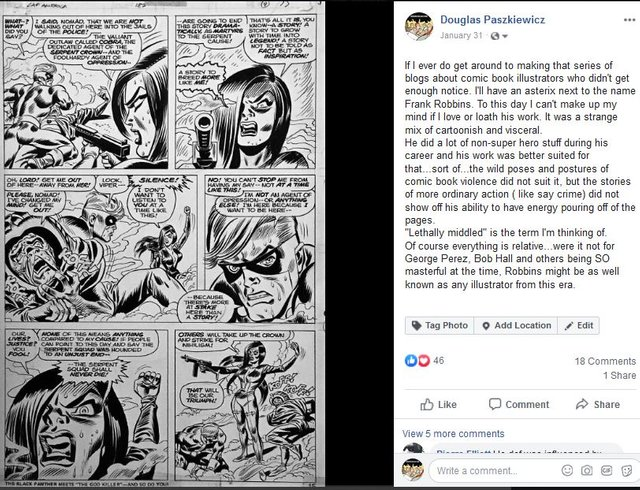 More of my work can always be found at https://www.arseniclullabies.com 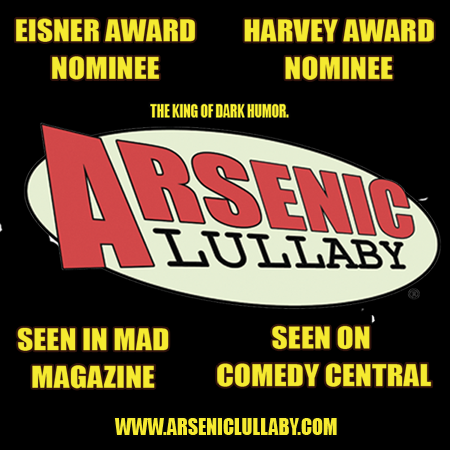 Great thoughts all around. I think the one saving grace for the “big two” is the fact that comic publishing is such a small line item in the budgets of their parent companies. I believe they’re kept on purely as content farms for movies, television, and merchandise. Comic creators do a lot of the early concept work and development at a fraction of the cost of the broader entertainment industry I think.

Survival of comic shops is probably my biggest fear, while a shakeup in the distribution model could be a blessing or a curse.

I’m still working and haven’t had any extra free time due to current events, if anything it’s been more demanding and exhausting. However I’ve still been finding more time & energy in the past week to read and create. No matter what people’s thoughts are on the pandemic, it’s certainly a catalyst for self reflection and maybe focusing on things that are important to you. Sharing reflections on your comics passion sure fits the bill.

I gotta crack this bad boy open soon... just got delivered a couple days ago... good fodder for an upcoming post!