Till the last breath - together

This is a story about love that goes far back into the past.
I have been working in healthcare for about three years now. Specifically stated in nursing home for the elderly. Here, the lives of young people are mixed with the history of the elderly.Here are the stories of people written by life. Of course, most workers do not think about what these people have experienced, and what history they have behind them.
I have always been interested in history, especially if someone told me the stories they experienced.

Here is the story of invincible love between two people.
When I started working in a nursing home, I met a lovely couple who had lived there for almost 4 years. They are not the only couple there but about this two was something special. We have double rooms with two separate bed inside. But this two push their bed together so they could be together even while sleeping. We have a lot of couple there, but this two made a life in a nursing home feeling comfortable.
So, one day I was having a 2 hours break, and in summer time drinking coffee outside and chilling.
We use computers in our work and we have a biography written for each resident. I almost always read what is written about them, so that it is easier for me to start a conversation when we take care of them. But with this couple, I kind of forgot to read it. As I enjoyed the sun outside, this couple came out and sat down next to me. She’s in a wheelchair, and he always push her around to get some fresh air. We started talking.
I must point out that most of the population is demented and that's why the work is even more difficult, but these two are still fine in their head.
I asked them how they met, and so the story begin.
Austria.
They met in year 1937, and spent most of their time on the playground. They became good friends. They were local children and at that time the children were not yet engaged in world news, of course it was also difficult to get any information and the parents did not talk about it. But slowly the kids also started to feel changes, even though they didn't know what was going on.
World War II was at the door. No one was aware of what this meant for them.
And then came year 1939. Most of the fathers went to war, defending a country that started a war with the whole world. The state was manipulating the media at the time, so families didn’t know exactly what was going on with their soldiers. Meanwhile, they received letters from their fathers that the army was advancing and that they were approaching victory. At least that's what they thought in 1940.
Over time, more and more men had to go to war and therefore there were no workers working in the factories, so this work was taken over by women and children.
She stayed at home and looked after her younger siblings, and he had to go to another city to work in a factory where they made parts for weapons ( he was 16 ). They said goodbye to each other and said they would see each other in a few weeks when it would all be behind them.
Life was getting harder and harder and everyone was afraid that one day they would get a letter that their fathers had died in the war. In time, her family received a letter stating that their father had fallen in war, and they somehow got hold of information that most of the men from their town did not survive, one of whom was also his father. But there was no time to mourn, women and children had to work all day to keep the soldiers in sufficient arms. Life in Austria changed, they were aware that they were slowly losing the war, although their media claimed otherwise. She had no information about him, she didn't know where he was or if he was still alive. Her family did not support the war but they didn't have the money to leave the country, so they had to stay there and not talking bad things about their leader.

He worked in a factory for a while, but at 17 he was drafted into the military, because a huge number of soldiers fell in the war, and it didn’t matter how old you were anymore. It was important that you defended the country, even though almost no one agreed with their leader's dream anymore.When America got involved in the war, they knew it meant the end for them. Most people were looking forward to it, even though they knew what it meant for them and their country. But war will be over and that was important. They lost too many people. So many families was broke.
In 1945, it all came to an end and now it was necessary to get back on their feet and start anew.
At 16, she became a seamstress so she and her mother could feed the family. She had no information about him, so she had somehow come to terms with the fact that he had fallen in the war.
And then in year 1946 she got a letter. He is alive, but wounded so he spent one year in hospital without any information about his family and friends.
And then he finally got home. The following year they married.

He suffered from depression, there was so much cruelty and pain he saw, and it was hard to came to turn when you killing people in the name of the country. But she was there for him and helped him forget at least a little about the horrors of war.

They got a job and built a house. After a while they had their first child, and few years later another one. Girl and boy.

Over time, it became difficult to care for both of them because she was in a wheelchair, and they decided to move to a nursing home.I was really surprised when I first came into the room. They were really cute and fun. If you happen to arrive 5 minutes later with pills or breakfast, the husband has already come out of the room, and said that the time for the pills has already passed and that we should be on time. Every single time. Of course pills were for his wife, and he really took care of her.
I haven't seen so much love in a long time. When you come into the room, and they hold hands and watch TV. That brightened my day many times.

Last year, however, the husband landed in hospital due to a bad heart. When he was brought back, he was unfortunately unable to walk and spent most of his time in bed. Even though she was in a wheelchair, now she made sure they got the pills on time. And of course the newspaper. She read him the news daily, and then they had long conversations about what was going on in the world.

Half a year ago, her husband died in his sleep. She held his hand and cried. When we asked her if she could leave the room for at least a few minutes so we can get him ready, and take it out of the room, she didn’t want to. She said she wanted to stay with hime those few minutes, and say goodbye to him in peace.

When I came to her after the funeral, I asked her if she wanted to talk, and if she needed anything. She said that sometimes life is unfair, but she was destined for a life full of happiness and love, and that she must remember only the beautiful memories and love given to her.
You can always see only positivity on her face, and even though she is in a wheelchair, she tries to do as many things as possible on her own, because her husband would like that.

I’m really grateful to have met this couple, because they showed me that love overcomes everything. Despite all the quarrels and disagreements, they were in love until the last breath. “If you weaken, I'll be strong. If you get lost, I'll be your way home. If you despair, I'll bring you joy. I will love you until the end of time.”- Karen Marie Moning 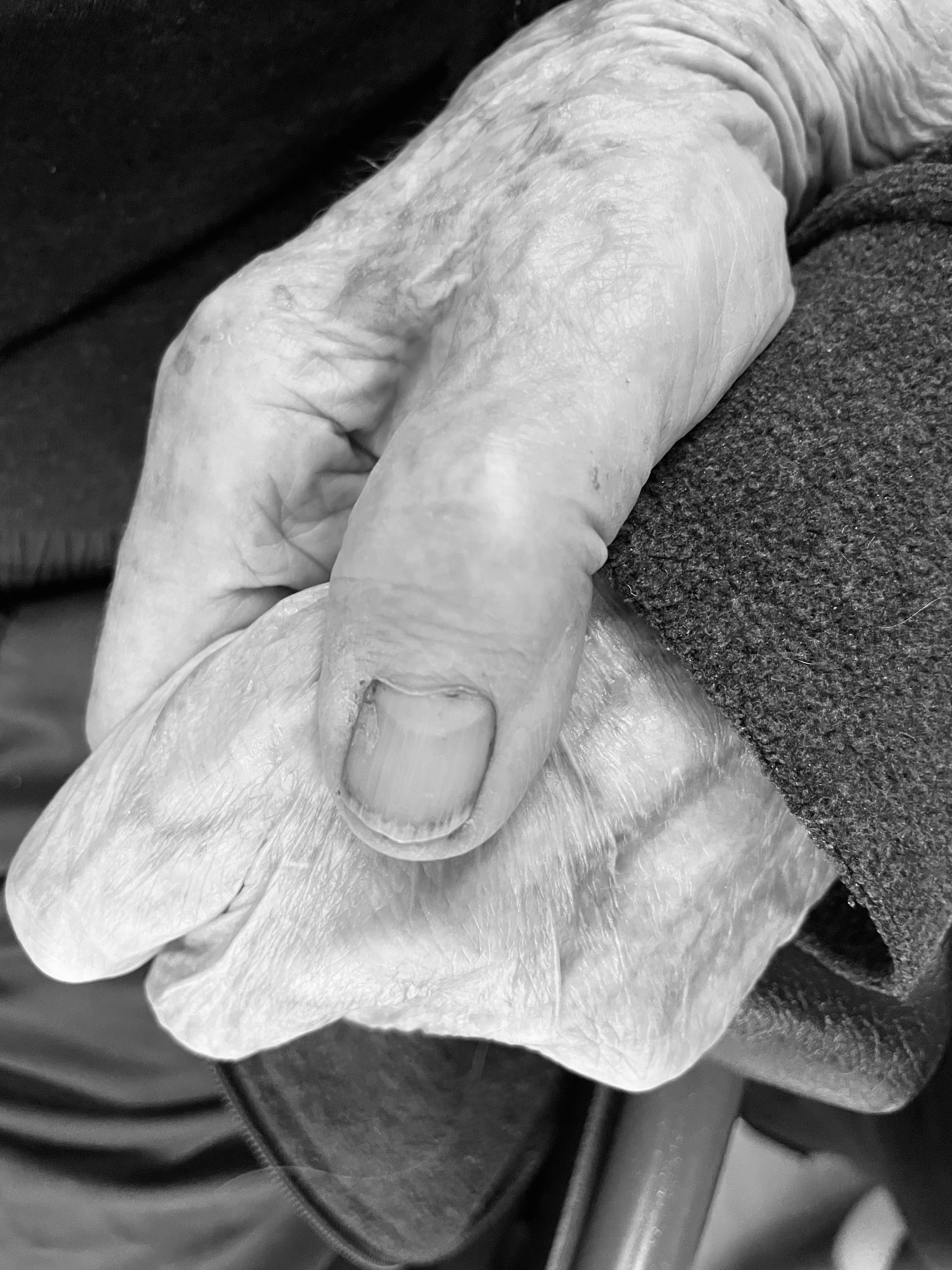 (I found them that way, so I asked if I could take a picture.)