Here in Southern British Columbia (Western Canada), all-time heat records are being smashed, towns are being burned off the map by wildfires without warning, hundreds of people are dropping dead from heat, and the sun is so intense, even tropical and desert plants are burning alive. With a lot of effort, sheer willpower, and luck, I've kept about half my garden alive. Here's how things are looking as we approach mid July! 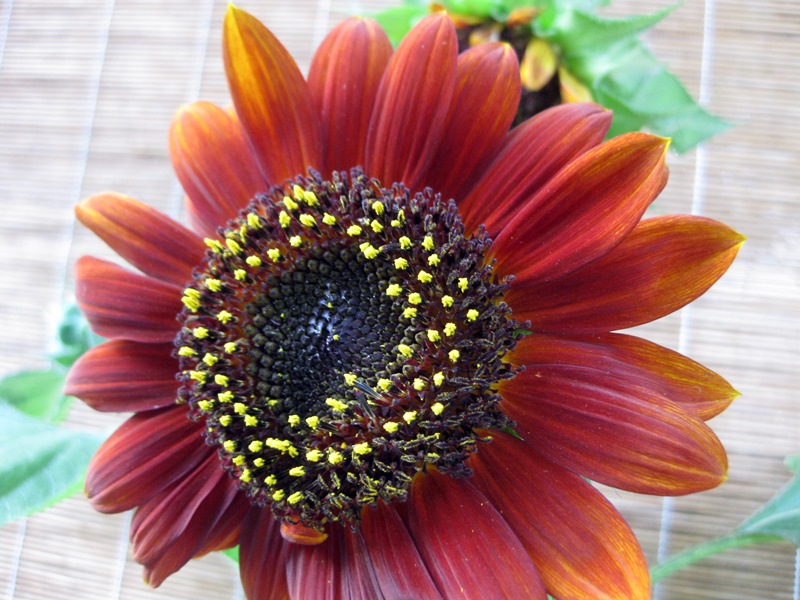 This beauty was grown by my wife @MediKatie, and it's in full bloom right now. It's got several on the one stalk. 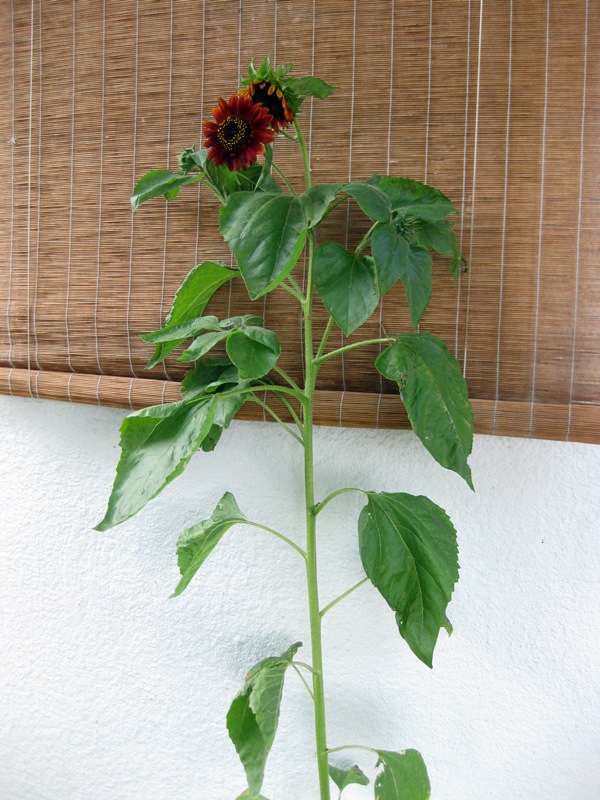 It's taller than me, now! Loving the sun. Being against the house, it only gets about half the direct rays. 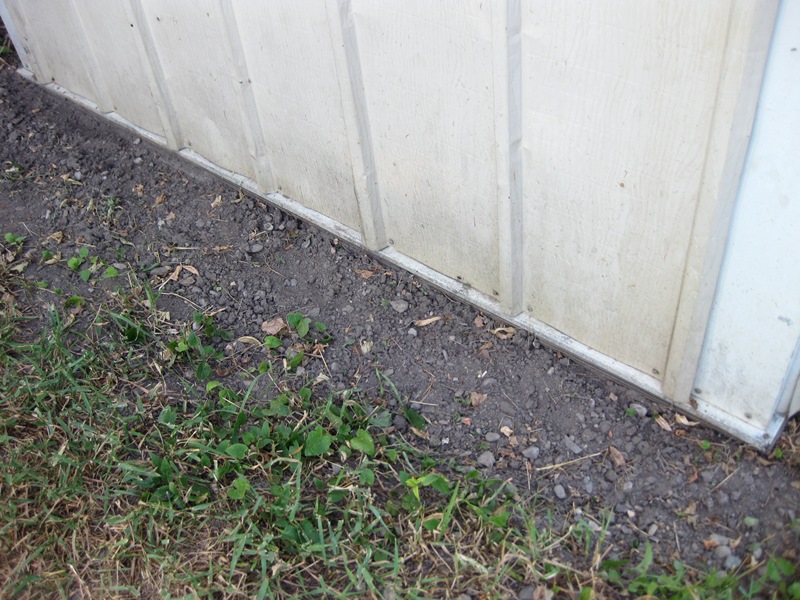 The peas didn't do well this year. After my last post, the first heat wave hit, and the tops all burned off (literally). They were crispy and brown that evening! They tried to recover, and we did manage to eat and store a few handfuls. But it was not what I had hoped. I hear most local gardners couldn't do peas this year at all. Peas are a spring plant, and when you don't get any spring (literally none), it's tough to make happen! Oh well, next year. And perhaps I'll do a fall crop? Maybe it'll be a cool and damp autumn. 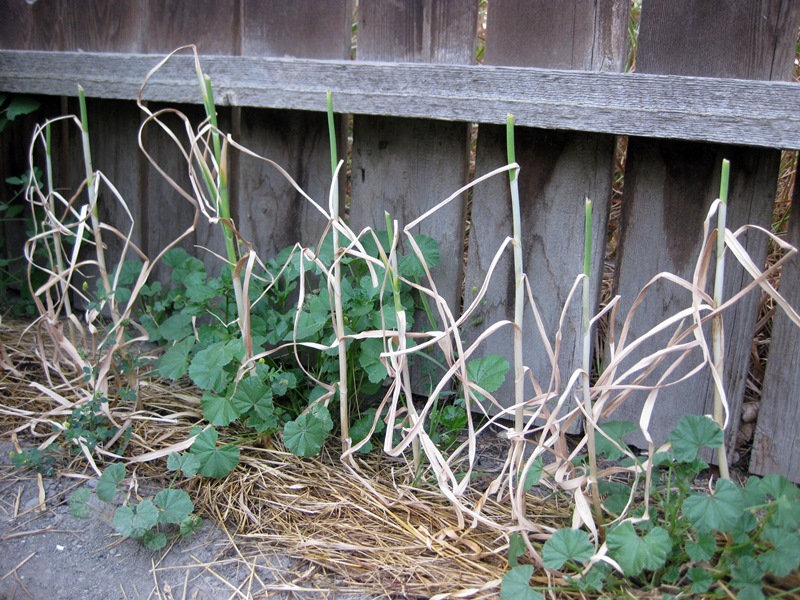 Garlic is another spring plant. These are the last of 65 total stalks I had going. The rest finished up early for the year during the last heat blast. I pulled them out and dried them up. 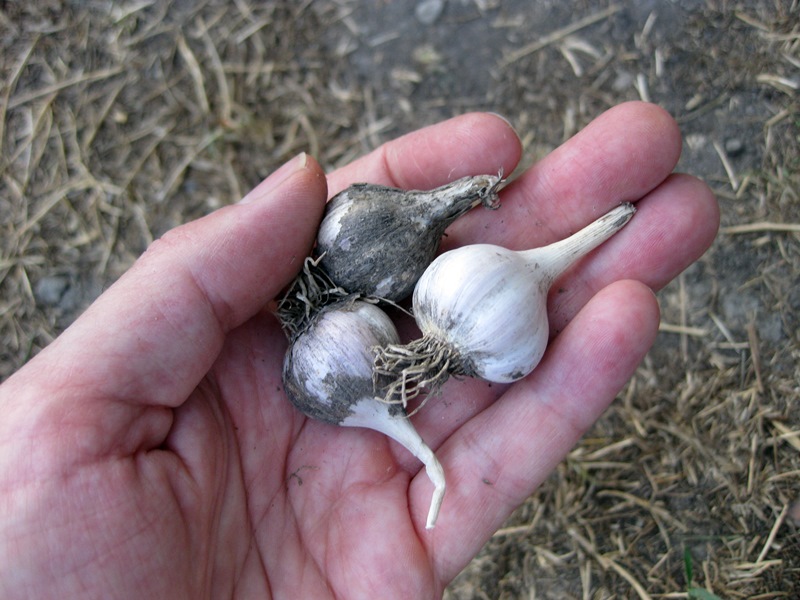 Cute little bulbs! They're sweet and dank, yum :) I mulched the survivors, and will let them go a bit longer before pulling and drying. 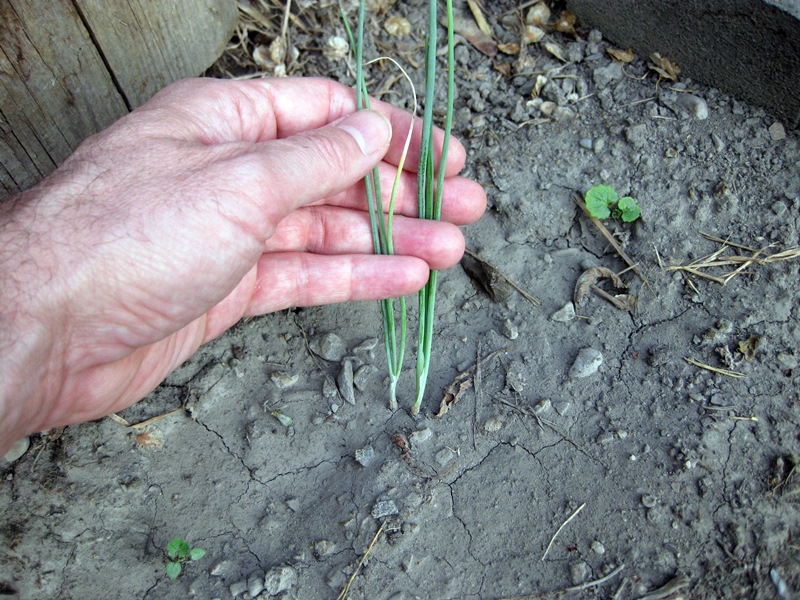 These are shallots. I've never grown them before and might not be doing it right. I have about 6 of these little things. 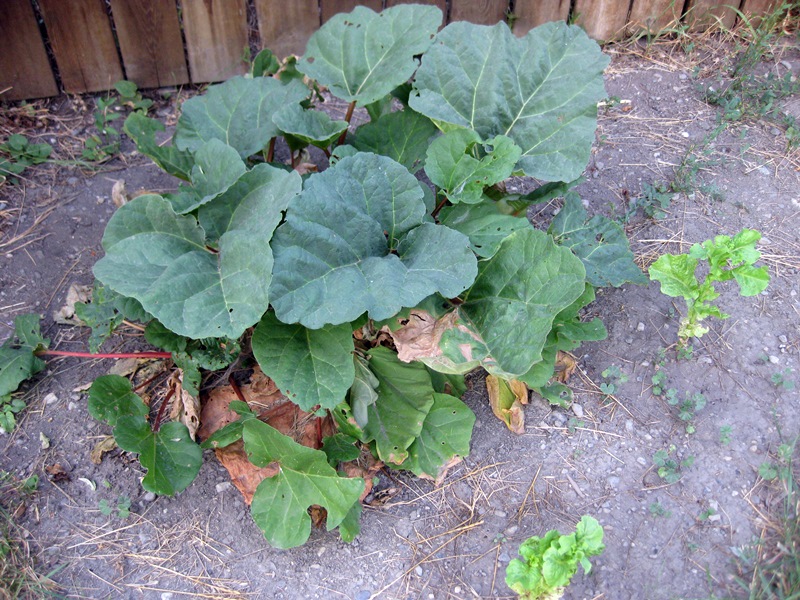 Those 2 little lettuce plants are still around because I'm letting them go to seed. I'd like to restock my lettuce seed inventory! 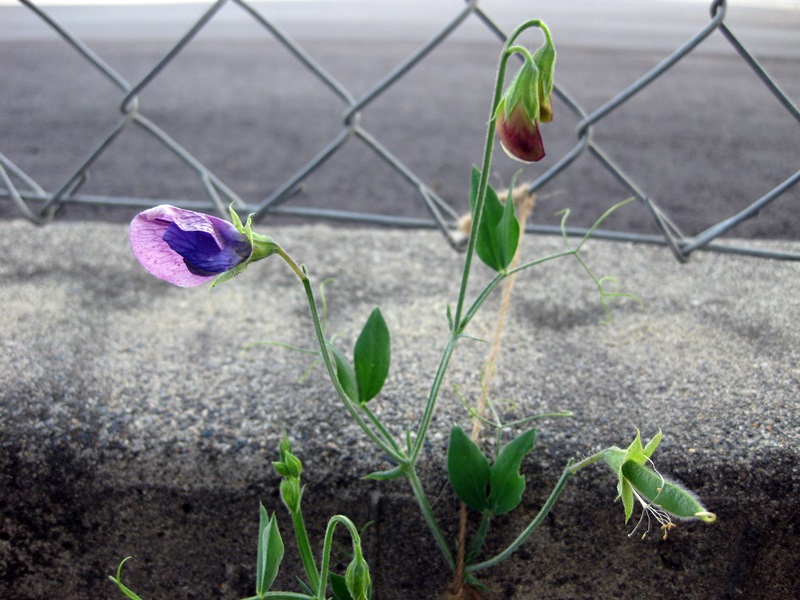 My grandmother, who passed away 5 years ago, loved sweet peas. For years, I took care of her garden for her, so she could live (and ultimately die) in the home she had raised her children in. Every spring, she had me plant sweet peas. My grandfather had always done so for her, but once he died, she kept up the tradition. As she got less able to do it, I took on the yearly task. It was my pleasure to help her finish her life in the manner she deemed best, right down to the sweet peas. 2 rows, assorted colours, right in the middle of the back garden.

This year, I finally had a place of my own and the opportunity to try to carry on the tradition. Thanks to the heat wave, it wasn't easy, but we've got a nice row of pretty blossoms along the front of the property. My son enjoys toddling around on the lawn, appreciating the colours of the flowers. 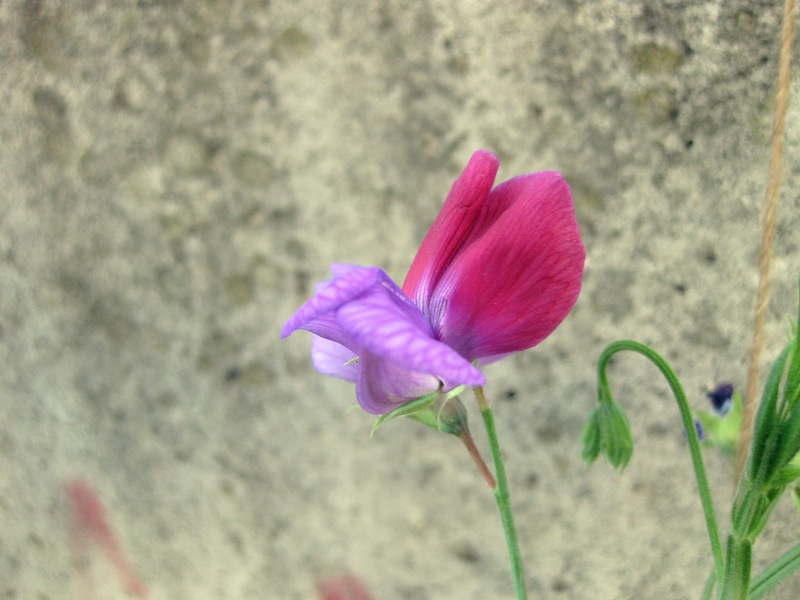 We made it, Grama. And we have Brett now, your great grandson! He's got a lot of your characteristics, and he certainly loves the garden. I miss you so much. Katie's helping me grow the sweet peas, and we're doing our best. I love you. I hope you can see the sweet peas, there aren't all that many, but they're as beautiful as ever! <3 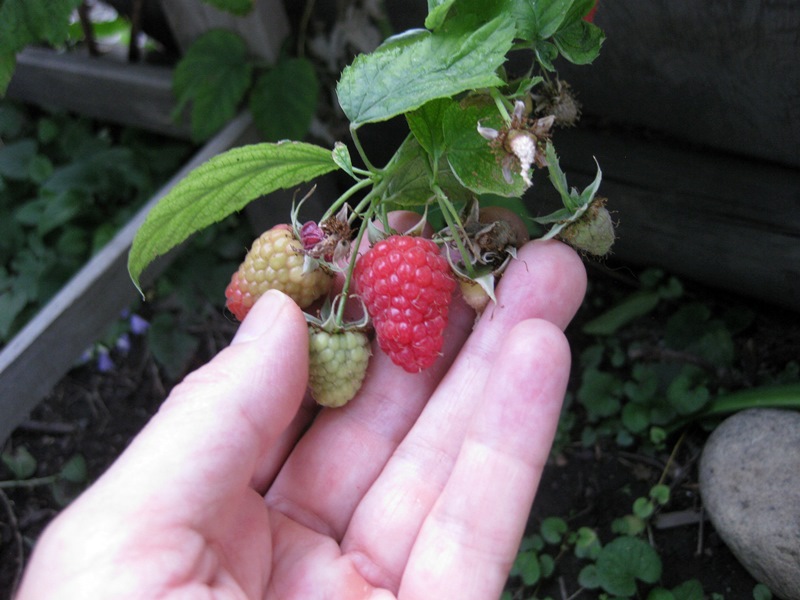 The raspberries didn't do well at all with the heat. It hit when they were trying to flower and set fruit... so the harvest is small, and not very juicy. Last year's were incredible, so I'm looking forward to better conditions next spring. 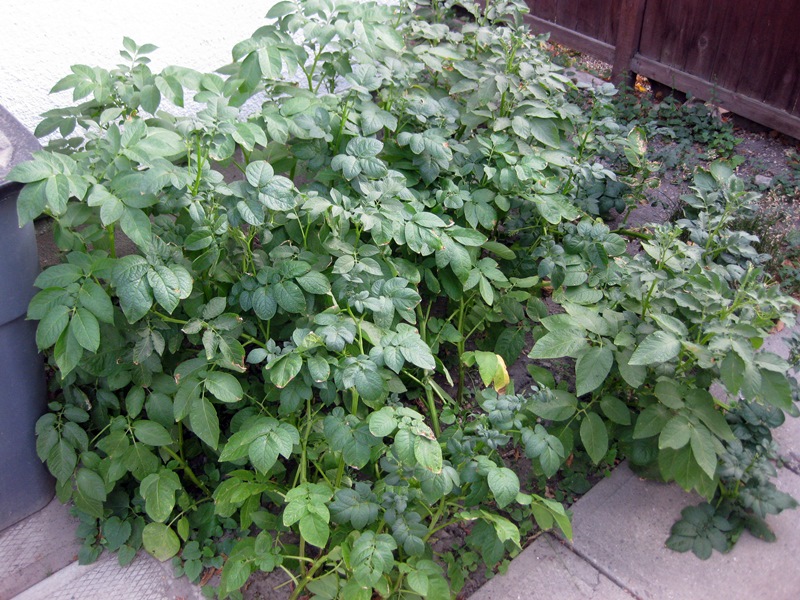 I showed this potato patch a few weeks ago, when it was a little shorter, and a bit greener. It's starting to mature now. All the flowers are done, it's not getting any taller, and some of the leaves are yellowing. I could harvest some little nuggets now, but I'm going to let them grow a few more weeks. Should be a decent harvest! 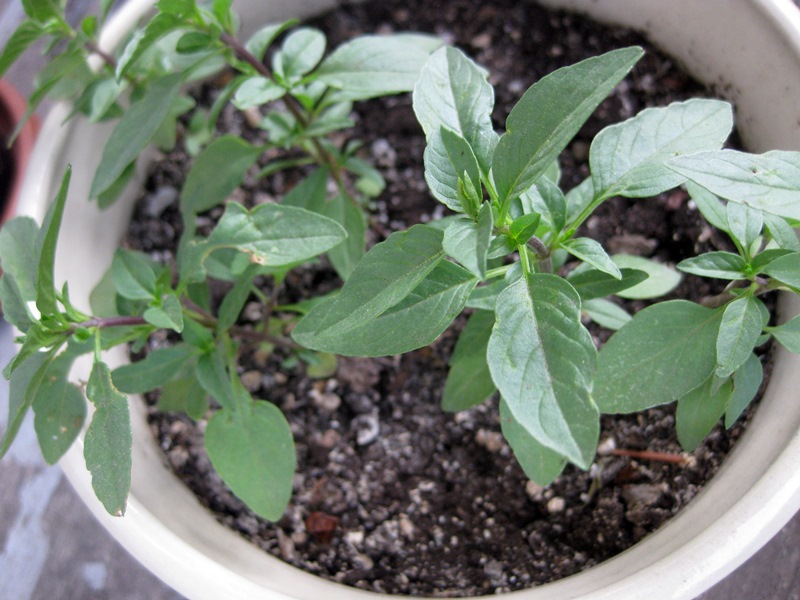 Some basil in a little herb pot. It likes full sun, but even so, is having trouble. Basil's leaves are usually broader and more tender. It smells good though, will probably dry up nicely to be used in recipes. 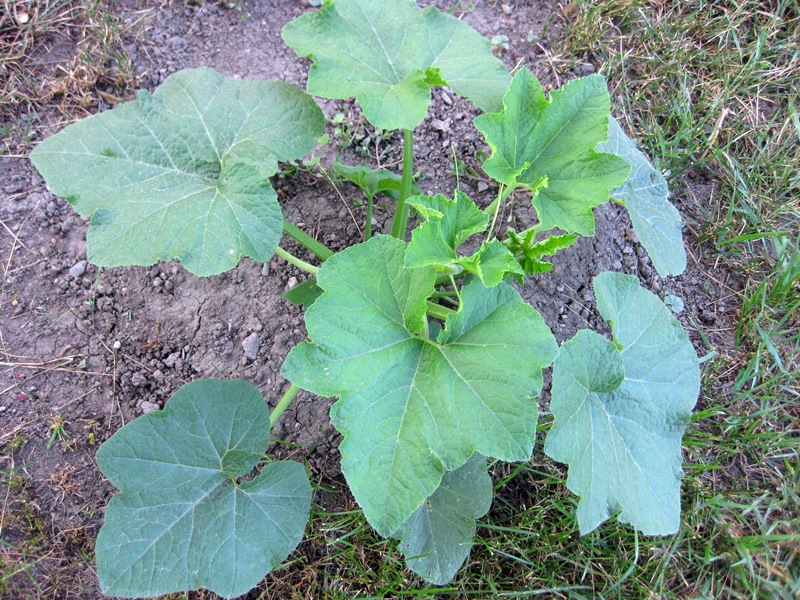 I got some good squash seeds last year and they're doing nicely now. They're a medium sized box-shaped winter (hard) type. Very tasty broiled with a little salt, oil and brown sugar! Or in soups, stews, curries, etc. 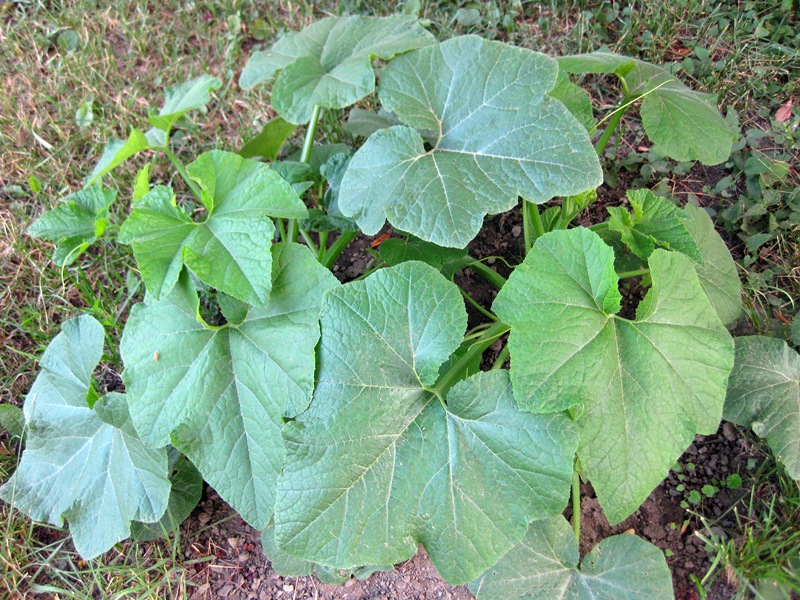 I have 4 large plants spread across the back lawn. If they produce fruit as nicely as they're producing green growth, it's going to be a tasty summer/fall! They get partial shade because of the birdberry bush, which is good because they can't handle the direct rays when it gets above 40 degrees Celsius. Not many plants (or animals) can! 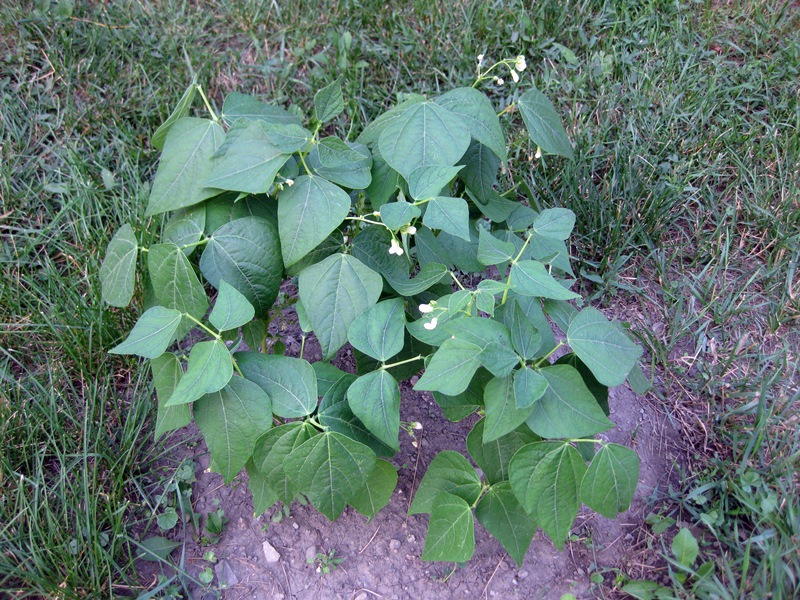 Beans! This mound was originally for cucumbers, but nobody around here was able to grow cucumbers this year (they're also a spring crop). So I put some bush bean seeds in these mounds, and we'll see what happens. They're flowering, but don't seem to be putting out any beans yet. 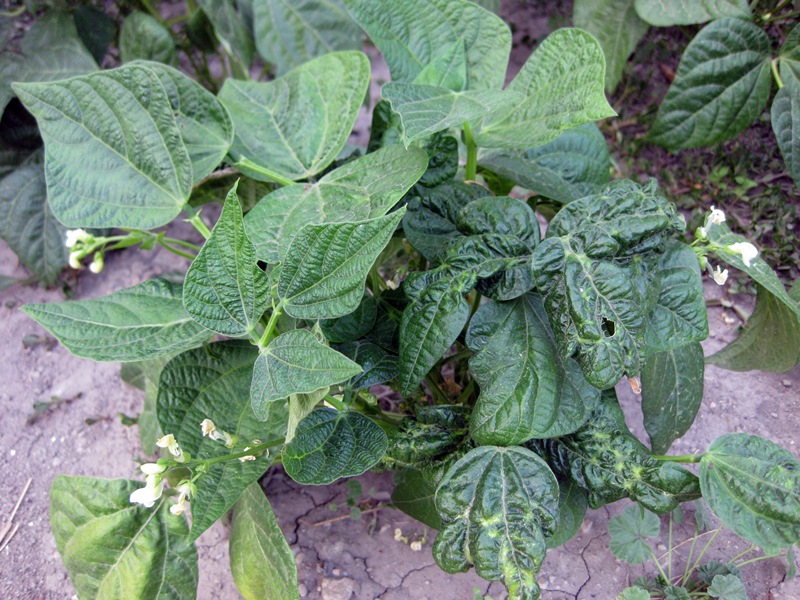 I have a few rows of beans in the main garden, and they're pretty scorched. That kind of heat does a number on a plant's tissues, and they break down. If the plant lives, the tissues recover as best they can, but end up looking very scarred. That sort of growth isn't very efficient and usually should be removed. Almost half my bean crop looks like that! 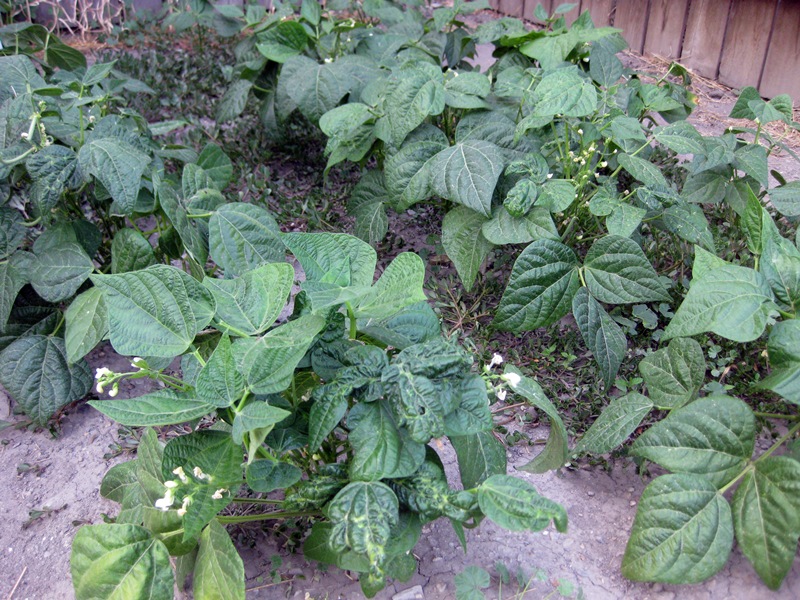 These plants do seem to be forming some beans for me. I'm hoping they'll produce for several weeks, and when they slow down, I'll do a fall crop. 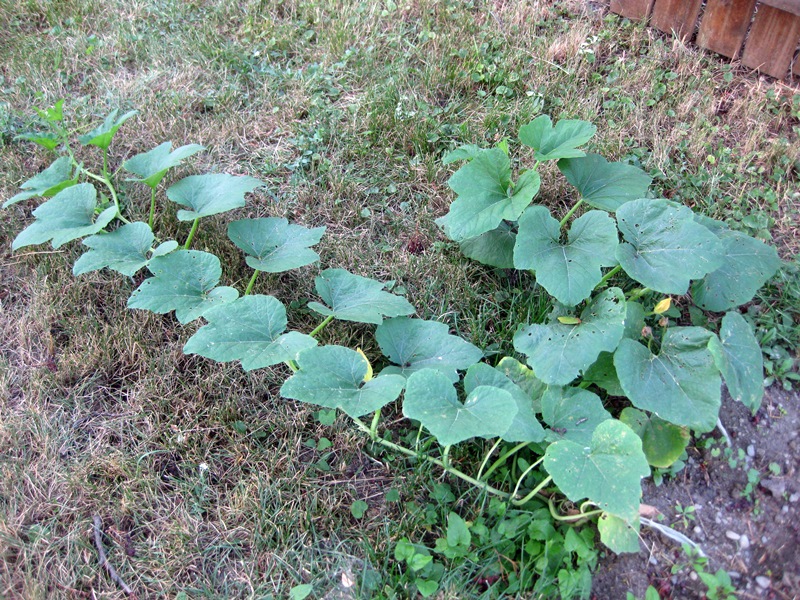 I had some good pumpkin genetics, so why not? This one is running across the front lawn. It has attracted some bugs, which eat holes in leaves so fast they seem to disappear as you're watching... but I've never managed to catch them in the act! So I'm just hoping they'll be taken care of by the heat, or natural predators, because I don't spray or use chemicals etc. The plants are growing faster than the bugs can eat, and I think they're coming under control. Maybe they can't handle the dry conditions (although I have to water the roots and soil regularly of course). 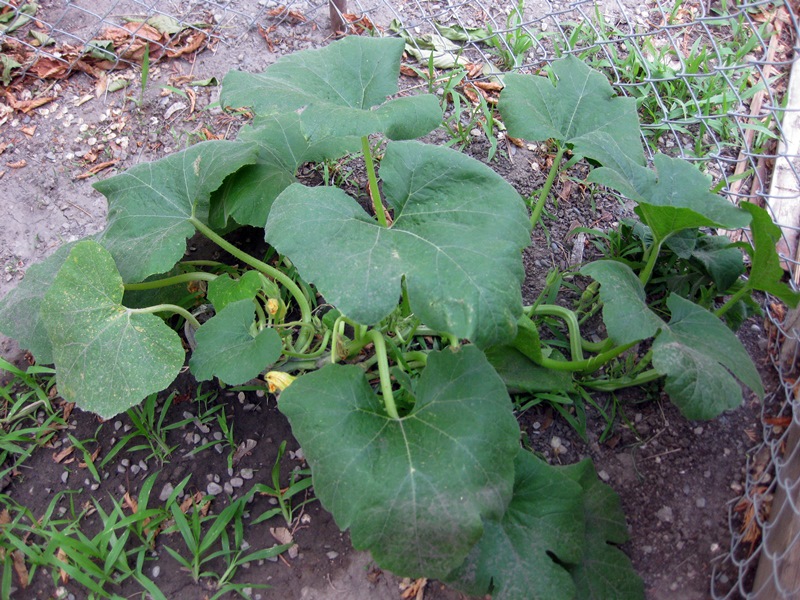 More pumpkins around the side. I'll decorate some, and I'll eat some. Pumpkins are just round squash. Extremely tasty and nutritious! 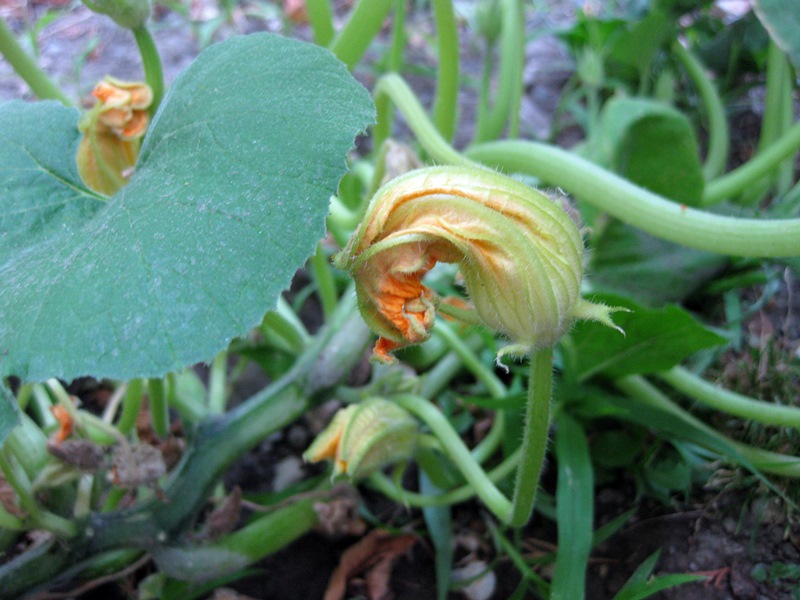 Pumkin flowers, like squash flowers, are edible. Some people batter and deep fry them. I'm just leaving them on, to encourage a fruit to form. 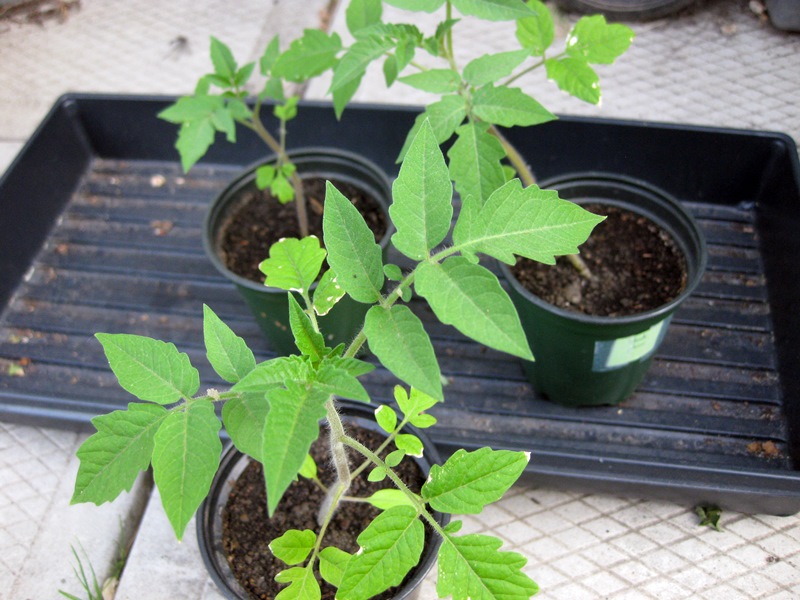 Tomatoes! I'm a seasoned tomato gardner, and they love the heat and sun. But they DO need a springtime! Without a chance to put out roots, and vegetative growth, they have no chance in the rays. So I still have several small tomato plants that can't go in the ground yet! Incredible! That's something I'm normally doing in April or May, not July! The next chance looks like this weekend, when temps are supposed to drop down to 30 degrees. That might be good enough to allow these plants to root into the garden soil.

These ones are "black plum". I've had these seeds for a very, very long time. Only a few sprouted, and only 3 survived to this point. They're outside now, hardening up, getting ready to go in the ground when conditions allow. All I want is for at least 2 of them to survive transplant, and I'll coax them to flowering, and get some fruit off them.

It's not the fruit I'm after, it's the next generation! A fresh batch of seeds with these special genetics. I'm really hoping to not lose them. 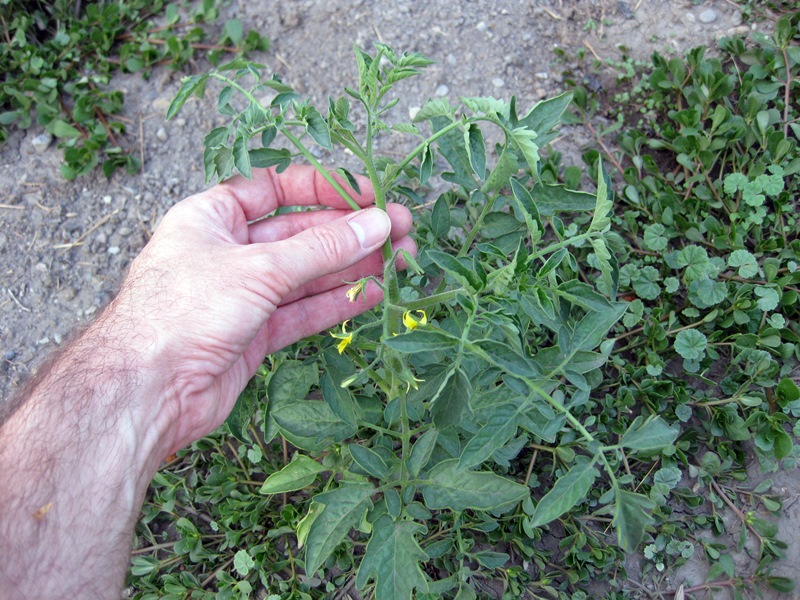 Here's a roma. Very small, but already flowering. What a weird year! We had cold snaps in April, and chilly nighttime weather until June, then July came along with record highs, and everything scorched to a cinder. Farmers are complaining entire crops are lost, whole orchards with fruit cooked on the vines, etc. 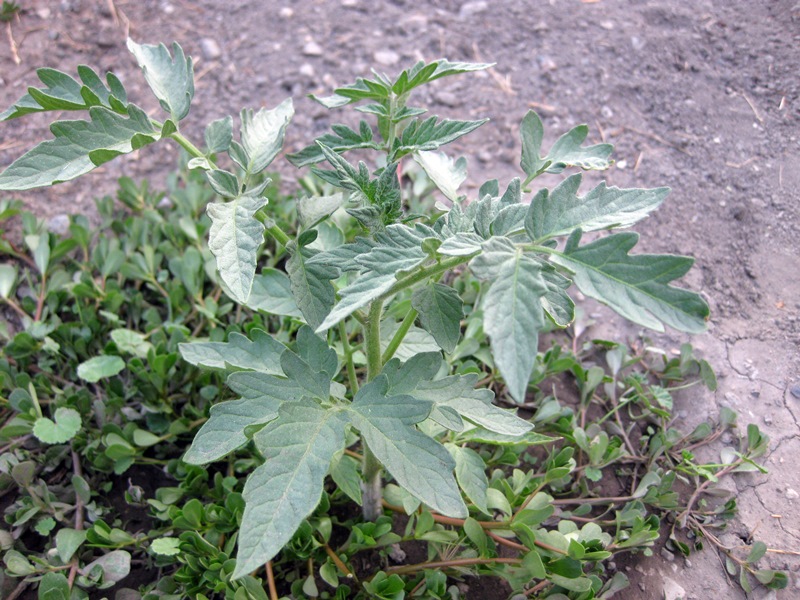 More special genetics! These are "old german" tomatoes, and I've only got 2 plants that survived. A subscriber from Europe gifted them to me and I only now finally have a chance to try to propagate them. I barely got these 2 plants through the 45 degree "heat dome", but they're alive, and starting to take off. It should be early enough in the season that they grow large enough to bear fruit, and give me back the genetics. I'll have hundreds of fresh seeds, that will last another decade or more, if all goes well. Here's an "orange bell" tomato. It's the largest tomato plant I've got going, this year. Kind of pathetic, but at least it's healthy. I won't get a great crop this year, but I'm going to (hopefully) get all my genetics back. Organic heirloom seeds with strong genetics are worth their weight in gold.

So it's a mixed year. I'm learning many lessons. If there are more record heat waves coming, this year and beyond, I will be more ready for them than ever before. And my repertoire of seeds just keeps getting better, too :)

Ooooh those are some pretty sunflowers and sweet peas! :)

It made for a great thumbnail!
Too bad the post didn't even get two bucks :P

Until now, 45oC was the hottest recorded temperature in Canada. Suddenly in the past couple weeks it's normal for several parts of the country!

From Covid lockdowns straight into another state of emergency, over the heat and fires.
Hmmm, do the masks block smoke, which is a LOT bigger than a coronavirus? Nope!

Well done on keeping most of the garden alive in that heat.

Crazy weather! Wonder what happened in the sky!

Where did all the clouds and moisture go? 2021 has been bone dry, all year. Even the cold snaps in Feb and April on their way down to Texas didn't bring any moisture.

For years, us conspiracy theorists said the state is controlling weather. Finally a few years ago, it was officially announced and admitted (like it was a good thing and always out in the open). So if they can make it rain.... they can also make it not rain. Hmmm.

Yup! They have been manipulating the weather in Vietnam and Iraq years ago as experiments. Now they could be very precise and methodical in creating earthquakes, hurricanes and drought.

This drought is to create famine and further depopulation for 2030 Agenda. I hope people have some contingency plans for survival.

Can't wait to see your Jack-o-lanterns

No doubt grandma would be proud. With all heat and atmospheric problems that are going on, you and @MediKatie are still doing a great job with all of your plants. It's unfortunate to see some of them struggling, but regardless, this crazy climate is no match for the green thumb you posses. Keep up the great work.

Thank you bro, I know you're aware how much love it can take to keep plants healthy, especially during trying conditions, and especially when not taking any shortcuts like fancy products or blowing big money on equipment. It's 100% technique, and of course Nature's masterwork! :))

Hey @drutter, here is a little bit of BEER from @networkallstar for you. Enjoy it!

@drutter! I sent you a slice of $PIZZA on behalf of @networkallstar.