POWER UP DAY IS FINISHED

AND THE RESULTS ARE IN !

We had the power up day and in the redfish rally that i am part of we have assignment PRE POWER UP and POWER UP BLOG on the 1st of the month. Normally @streetstyle does the blog, I did it in May and @traciyork did a great job in June. Power up day on the first of july was a total of 33,128.930 Hive Power powered up for #HivePUD

But for the last few months since hive pud came alive on this platform I asked to lower the rules so that redfish could enter the contest aswell. And @streetstyle agreed and @traciyork excecuted this very well. We had the redfish ralliers enter, and we made sure they had a room in discord @theterminal to place their blogs for extra votes, and views. We made the challenge that they had the chance to do two blogs AND to win prizes aswell as in the terminal but also via Traci. And I must say after much explaining and much persuasion, many of our ralliers did.

So today the blog came online and the final votes are in, 20 TERMINALERS enetered hive pud 17 made it into a prize and 10 redfishralliers fell into extra delegation prizes.

This is the Official Winners List taken from the blog by @traciyork
I will post it below. Here are the Terminal members and redfishralliers from the terminal rally.

@ambarvegas @isabelpena @seadbeady @lyubo19 @dumouevarist and @mariale07
you won a delegation for :
100 HP by traci
and a extra from
@fionasfavorites
for 50 HP for 3 weeks !!!!!! WELL DONE

This month we will be hopefull that more members of our discord will power up with us, and @traciyork, hopefully there will be more than 35.000 hive powered up.

In the terminal we have the challenge to do a blog PRE power up , because the daily blogging is a assignment in our summer edition aswell, so only votes in the terminal for that for our ralliers.

Five for #HivePUD AUGUST 2020!we cant wait, and here are the rules, if you want to power up and are NOT A RALLIER !!!!
Taken from track’s blog:

Okay, so for this month I removed the requirement for a pre #HivePUD post, because I had this addition in mind, but didn't have the time to implement it for July. I'm going to do a separate post about it shortly (it was supposed to be right after I published this one, but putting this together ended up taking me MUCH longer than I'd anticipated... 😂 ), but the general idea of it is...

Every month after I (or @streetstyle after he returns) post the #HivePUD winners announcement, I'll do a, "Five for #HivePUD" post for the month. You can take part even if you don't qualify for PUD prizes, and even if you don't power up! This is more about getting the word out about Power Up Day, both here and on Twitter.

If you're interested in sponsoring a prize, please shout out and I'll add you to the list. For more details, keep your eyes peeled for the official announcement post in the next day or so.
Again, thank you to everyone for making this #HivePUD event such a wicked awesomesauce success! The #Hive community ROCKS!

So last but not least I will sponsor 2 x 5 hive to redfish under 500 HP that enter the AUGUST HIVE PUD. Can be outside of the redfishrally ofcourse the draw will be online.

Last thing thank you for all the work, and the 3 blogs you made about HIVE PUDDING , and I hope that @streetstyle is proud of us, and is ok in his real life. Happy hive collecting and see you all in 26 days. Thanks for stopping by, its appreciated and remember focus on being creative instead of being bee-zy.
Consistent Actions Create Consistent Results.
Not everyone is a blogger but everyone has something great to offer.

Lover of Life and L❤️ve in General - @brittandjosie

I am a proud member off the #theTerminal #powerhousecreatives #needleworkmonday and #payitforward and #steemitmamas. Co founder for @theterminal, @heyhaveyamet and @steem-aide

(c) All images and photographs, unless otherwise specified, are created and owned by me. @brittandjosie originals. Sources used : Pixabay and Pexels and with others its mentioned in my blog. I only use a canon camera and my iPhone.

I would like to thank you for reading my blog, feel free to leave me any feedback, if not, read you next time. Are you under 500 HP or SP , want to win prizes or delegations? Than you can enter the REDFISHRALLY, go to @theterminal blog and see what its all about.

So I havent won anything?
Sad.. Yes you won all , you were first I believe but you have to look at the blog by the contest holder it’s in my blog it’s traciyork, I just did a recap of the once part of the terminal and the redfishrally, go see the blog for your prize by @traciyork
Thanks for replying to my blog and maybe I see you in the terminal

ah thanks for clearing it for me :)
I really was a bit confused..^^
..so many contests which also play along on the same day..

Yes you are the winner i checked on her blog so you have won delegations , so CONGRATS

thank you :D
already got one delegation but didnt notice :pikachu:

How is voting going with the new delegation and the higher HP?

thats like really quick, so your vote is already worth more than it was last week, happy voting i say.

Well I have to tha k you for joining we ask a lot from the ralliers but there is a reason. The fact you won and now are more powerfull for the next three weeks is winded for your account. I wish you luck with it and remember it’s coming again soon 26 days to earn and convert to power up on the first of August

Of course, thanks @brittandjosie for the constant support for the Ralliers. I'll keep trying.

In 25 days we will have the next hive pud

All right, I'm gonna go get ready for the day.

Thanks for the update, it was great to being able to start building slowly again @brittandjosie along with @traciyork for early reminders.

It is so much fun , and traci did a great job

I can give you the recipe if you want hahabab

Congratulations to the winners. My delegation to @dumouevarist - announced in @traciyork's post, has already been made. Good luck!

Thank you very much, the support is always welcome. Glad to have won the delegation.

PS: Now I am seeing all the comments and mentions on my account due to internet problems.

You are very welcome. Trust that your internet problems are sorted and you have the opportunity to maximize your delegations for the next while!

You beat me to it, @fionasfavourites! 😂 Now my delegations to...

...have been made as well! Congratulations, everyone! 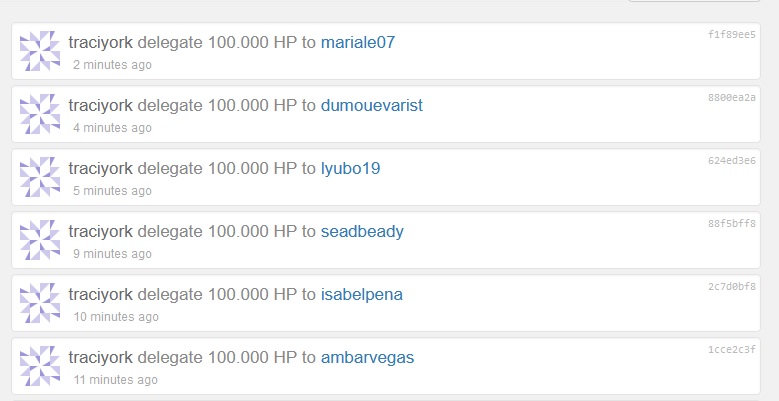 Thank you also @traciyork for supporting with your delegation. It motivates me to keep doing things right. Greetings.

Thank you very much for all the work and delegations

Well, thanks to geography, I just happen to have a few hours on you! 🤣🤣🇿🇦

i saw and we do like that he won , it will certainly make a difference in the voting next weeks,
so grateful thanks fiona