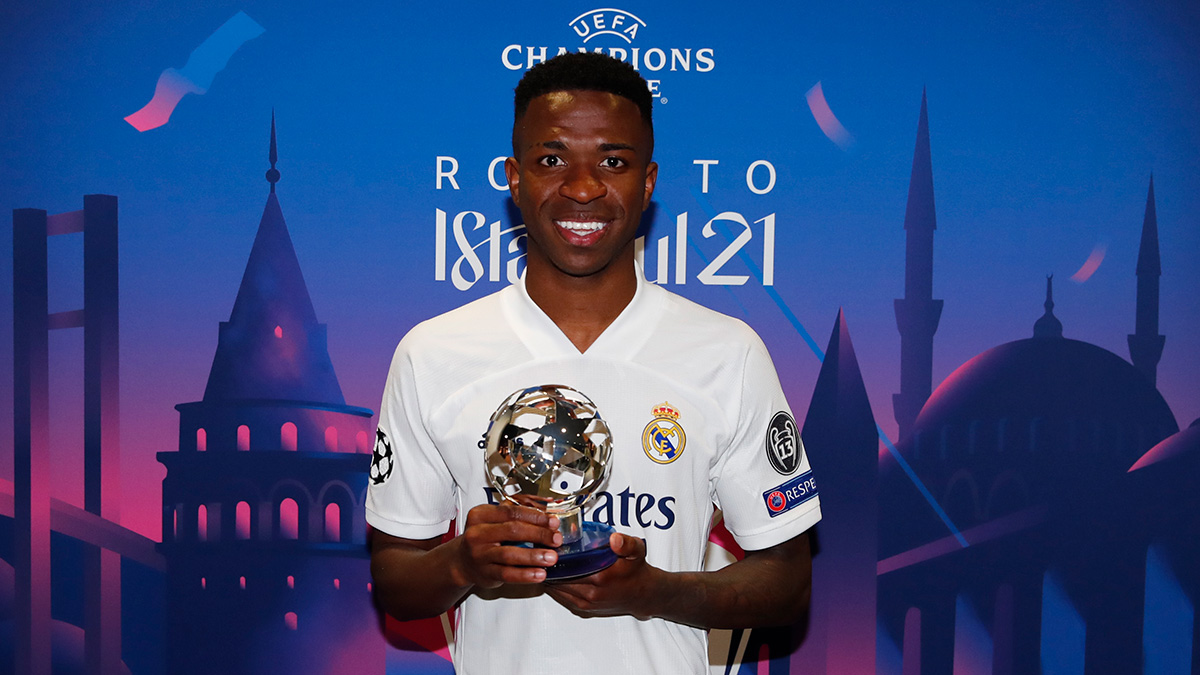 Source
English
Español
The Champions League is finally back and what a better way for this competition to return than to present a match between the 2 teams that played the Champions League final of 2018. Real Madrid vs Liverpool have been 2 of the best teams in the past 5 years, and even though both teams are currently not in their best shape, I was still expecting to see a good match with exciting performances from both sides.

Why I said the teams aren't in their best shape?

Well in the case of Real Madrid, since CR7 left the team they have managed to compete without a superstar goalscorer. Let's be honest here, Benzema can be good sometimes but he isn't a top goalscorer like CR7, Messi, Lewandowski, among many others. The team was able to win the previous Spanish league, but there is still the need to bring over a new generation of superstar killer.

It is no secret that a lot of Real Madrid fans have the desire of seeing Mbappe wearing Real Madrid's shirt. And now with Haaland proving he is also a super killer, then there are now 2 options. In my opinion, if Real Madrid doesn't sign either Mbappe or Haaland this summer, this will condition the team's future success. It is imperative to bring one of those 2 players if the team wants to remain competitive in the coming year. I think Haaland should be an easier option simply because it will probably be a cheaper operation.

Besides the lack of a superstar killer, the team has also suffered a decrease in their defensive performance. Last year they had the best defense in all Europe and this year they are just good but not the best. They have been receiving more goals than last year and that's why they aren't in the first position of the Spanish league. So, no top goalscorer, and a weakening defense leaves Real Madrid in a slightly vulnerable position.

In the case of Liverpool, they don't have any goalscoring problem. They have excellent attacking players such as Salah, Mane, Firmino among others, and they can easily score 3 goals in any match. Salah, who is Liverpool's best player, always competes for the individual trophy of the top scorer in the Premier League, so it is fair to consider him a superstar killer. In fact, he scored Liverpool's goal today.

I consider Liverpool isn't in its best shape because of huge bad luck with the injuries on the defensive side. When they lost Virgil van Dijk over a long-term injury they were completely unable to remain a competitive team. van Dijk is one of the best defenders in the world, and without him their defensive performance is mediocre. But they didn't just van Dijk, they also lost other key players such as Henderson, Joe Gomez (another important defensive player), and Joel Matip (another defensive player). Their entire defensive line has been injured which results in an unbalanced, they have great attacking players but bad defensive players.

How was the match?

I couldn't be on time so I missed the first 10 minutes but since the moment I began watching it, I saw Real Madrid as the clear dominator. I was expecting Liverpool to do a lot of high pressing in the beginning of the match, and maybe this happened in the first 10 minutes, but I didn't see anything like that.

Real Madrid was in complete control with Kross and Modric remembering their better days when they conquered all the major stadiums year after year in the 2016-2018 period. They imposed their skills once again, and it was very frustrating to Liverpool players to be incapable of taking away the control of the match from Madrid players. Vinicius had the best match as a Real Madrid player. He caused a lot of danger as a left-winger over and over again and drove Alexander Arnold crazy. He scored 2 goals, which is very unusual for him, and both goals were great. Besides the goals, he also participated in a lot of attacking plays and could have both scored more as well as give some assists but his performance was spectacular. He was clearly the man of the match today.

Liverpool had no way of stopping long passes from Kross and this was how the first 2 goals started. Kross is excellent when it comes to finding open spaces to sneak a good pass and did a terrific job today, the pass he gave Vinicius in the first goal was perfect. Modric was also great at moving between lines and helping both in attacking plays as well as in defensive moments.

I mentioned a few paragraphs above that Liverpool's defense was mediocre thanks to injuries, well, this can be seen in the second Real Madrid goal. It was scored by Asensio, Kross makes a long pass and a Liverpool's defensive player gives a header but instead of sending the ball away from Real Madrid players, he sends it straight to Asensio and what's even worst, he leaves Asensio face to face against the goalkeeper. This was such a horrible mistake that's hard to justify for Liverpool.

The second part started with a 2 goal advantage for Real Madrid but this wouldn't last much because Liverpool would quickly score a goal after a good play involving Salah and Diogo Jota. Having so many good attacking players, it was almost impossible for Madrid to receive zero goals today. I think that in the end, they were happy just receiving one.

Once Liverpool scored their first goal, their confidence grew and it was clear they were looking to tie this match but this is when Real Madrid's defensive began to shine. Sergio Ramos and Varane, who are the 2 main central defenders, were unable to play today, but luckily for Madrid, they have 4 excellent central defenders and not just 2. So, the 2 who are almost always on the bench, had an opportunity to prove how good they are. Most people already know who is Nacho, a very polyvalent player that can play in different defensive positions and he always gives a good performance. Militao, on the other hand, is the youngest and newest central defender and is the one with the least amount of minutes played so far this season but he is also a great defender. Today, he was the best defender of the entire match, even better than Nacho I would say. Militao is super fast, has a good header, and is simply an awesome defender.

These 2 central defenders, along with the great performance from Mendy and Vazquez, which is usual by this point, allowed Real Madrid to survive Liverpool's attacks and eventually win the match. The third Madrid goal would be after a good movement from Modric inside the area that finished with a pass to Vinicius and an immediate shoot that went straight in. This was another excellent goal.

The only Real Madrid player that had a bad match was Rodrygo, again. He appears to have been going through a rough moment when it comes to his performances, but I think he will eventually begin to feel more comfortable again. He recently had a long-term injury so this might be what's causing his low performance. In the case of Liverpool, his attacking players were very good, there were good movements from Mane, Salah, and Jota, but this wasn't enough to obtain a good result. Liverpool's defense was a mess which was expected due to the reasons explained before, and due to this weakness, they ended up suffering a hard defeat. You can see the match summary in this ESPN page.

It is still too soon to say Real Madrid already reached the semifinals because there is still a second match coming next week. What's sure is that after this result Madrid players will be much more secure in their plan compared to Liverpool players. Next week we will see what happens. In the past, Liverpool has accomplished great comebacks so everything is possible.

Later today I will be watching the match between Bayern Munich and PSG, the same match as last season's Champions League finale. The only bad thing is that Lewandowski won't be able to play due to an injury, and currently, he is considered the best player in the world so this is an extremely important absence. I am expecting to see an energetic Mbappe and a creative Neymar. Without Lewandowski, I think PSG is the favorite. We will see...