A Grand Interdimensional Adventure in the Park Pt. 3

I’m not one for conspiracy theories, but there was no doubt in my mind that the birds were up to something that day. You see, throughout the year, different feathered species congregate on this side of the bay. Yet, they usually keep their distance from each other. As I approached the beach, however, I realized something unusual was happening. A crowd of birds belonging to different species had gathered there. For what purpose? I did not know. 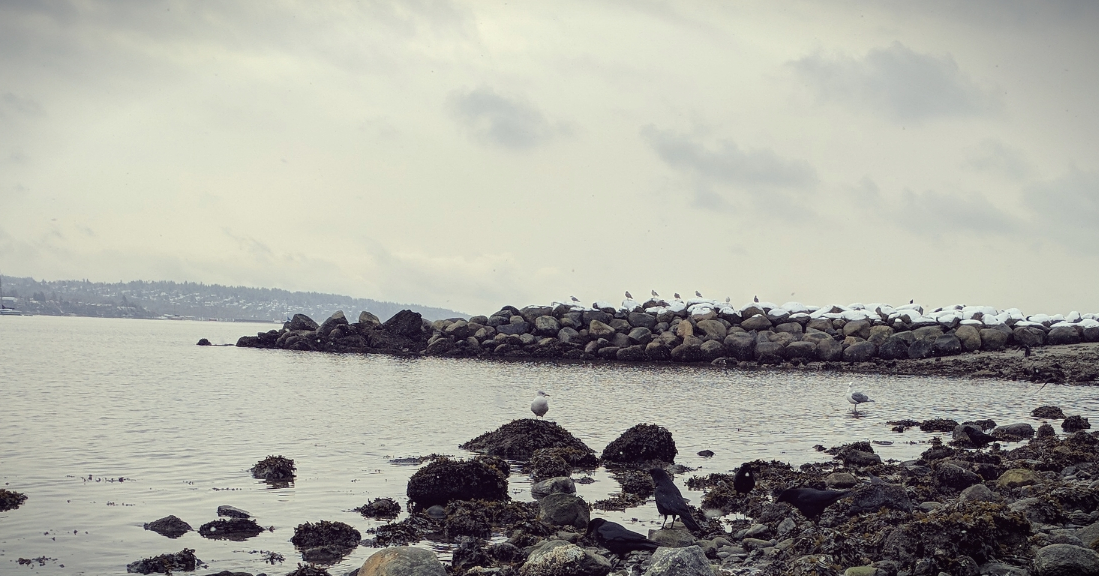 “Surely you have taken leave of your senses," a reasonable reader might object. "The cannabis tincture has finally gone to your head. There is nothing unusual about a bunch of bird gathering on the shore of some ocean.”

But I assure faithful audience that this tale is true. Something was afoot that day. Stay with me awhile, and I shall present the evidence of this vast avian conspiracy, so you’ll have no reason to doubt me. 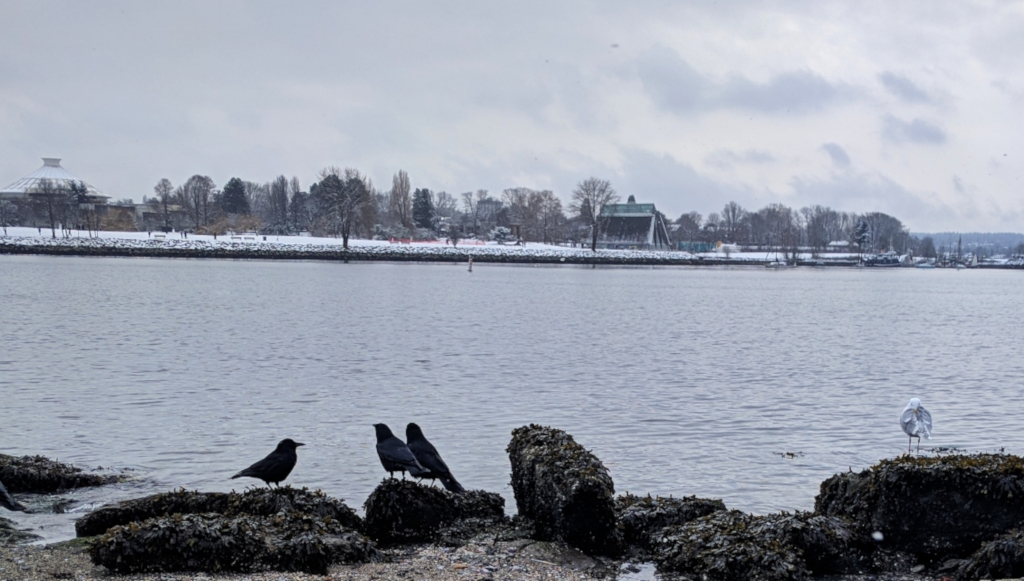 I don’t trust crows to begin with, but when I see their murders on the beach, I trust them even less. They’re wicked clever by half, possessed of keen senses, and prone to deviousness. I’m convinced that if we ever cease to exist as a species, then crows will be our evolutionary successors. They’ll evolve into a super smart, highly agressive species that doesn’t take shit from anybody.

The mysterious birds searched among the rocks, assessing and analyzing the territory, harvesting along the spatial grid-lines of the tide boundary. Something odd happens as I make my way along the shore. There are several groups of crows, and one particular group, or murder to use the formal term, suddenly takes up flight, goes around over the ocean and then returns to the exact same spot. Oddly, other birds did not move. Just look at the stoic seagulls observing the murder in flight! I suspect that the crows behavior was not a reaction to a threat but to something else. Some in-species code perhaps, an enigma to the rest of us. Isn't it strange? 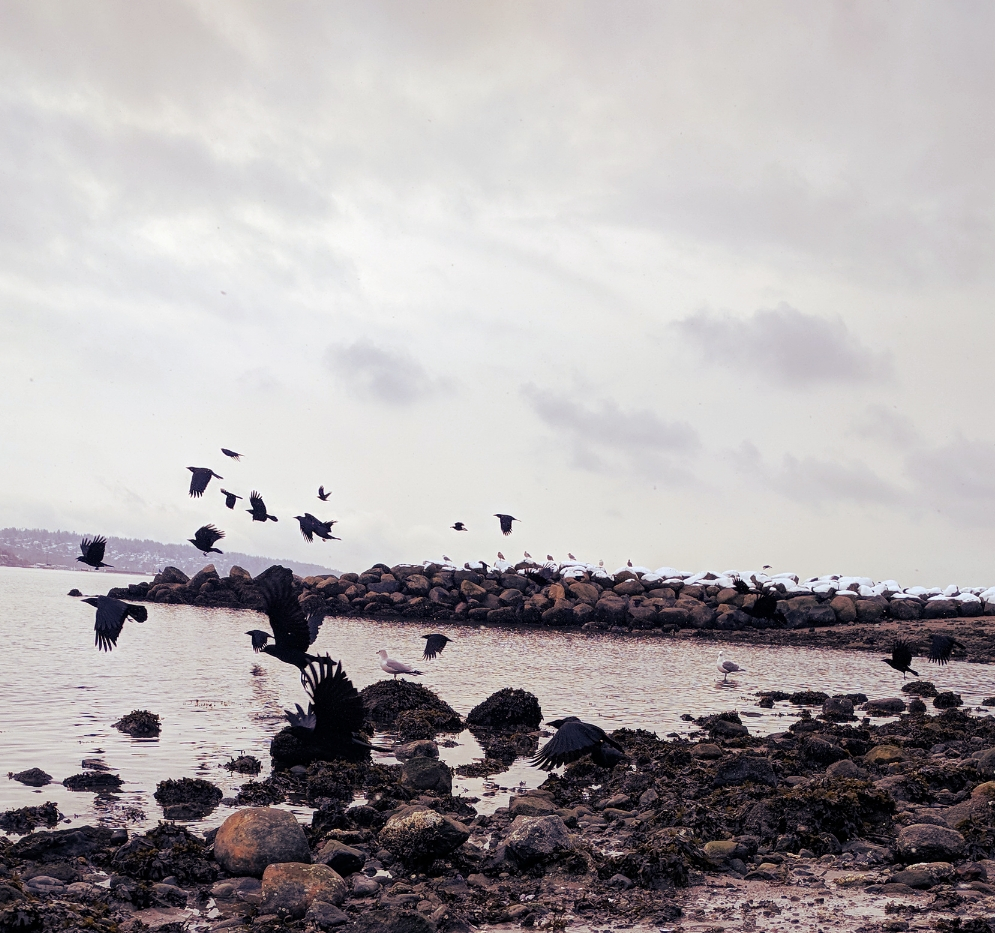 Ah seagulls… what more is there to say about them? Seagulls are seagulls, and that’s all there is to it. Crows might be the species that rebuilds society after we’re gone, but I have absolutely no doubt that seagulls will be the ones to tear it back down. 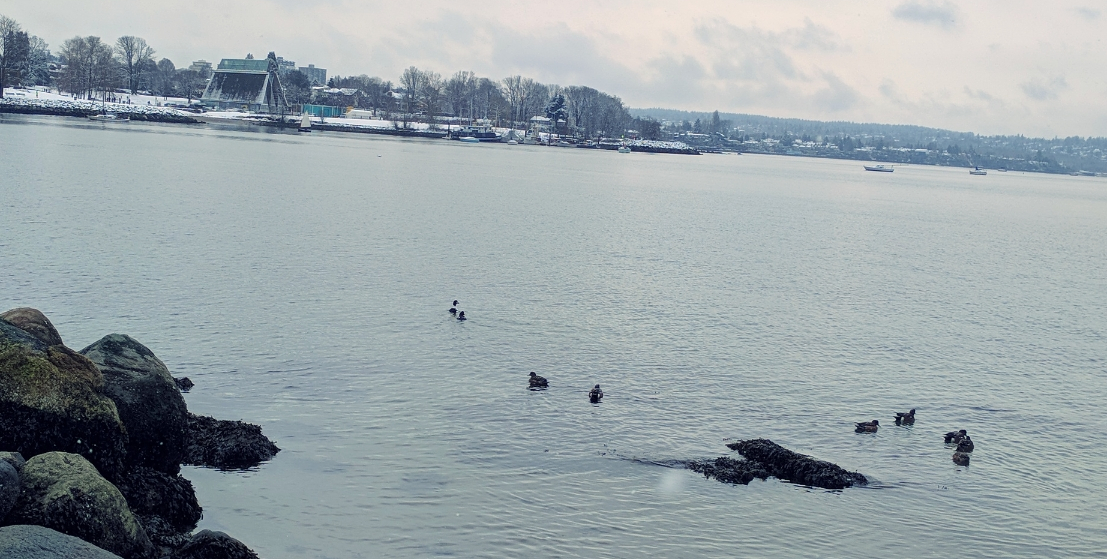 Ducks are not only delicious; they’re also lovable. Perhaps the least offensive of the bunch that had gathered on the shore. I spotted different species that were swimming in the ocean: Mallard, Buffleheads, wigeons, Barrows Goldeneye and even some whose kind I could not discern. It was quite wild to see their different markings, colors, shapes, and sizes. Floating in the gentle waves. Alert and savvy of the nautical ways. Swaying to and fro as the tide receded. Some dove beneath the surface with slick aquatic form, only to pop back up a little while later with delicious treats in their bills.

What a rare sight. So many different species together at this precise moment in time. 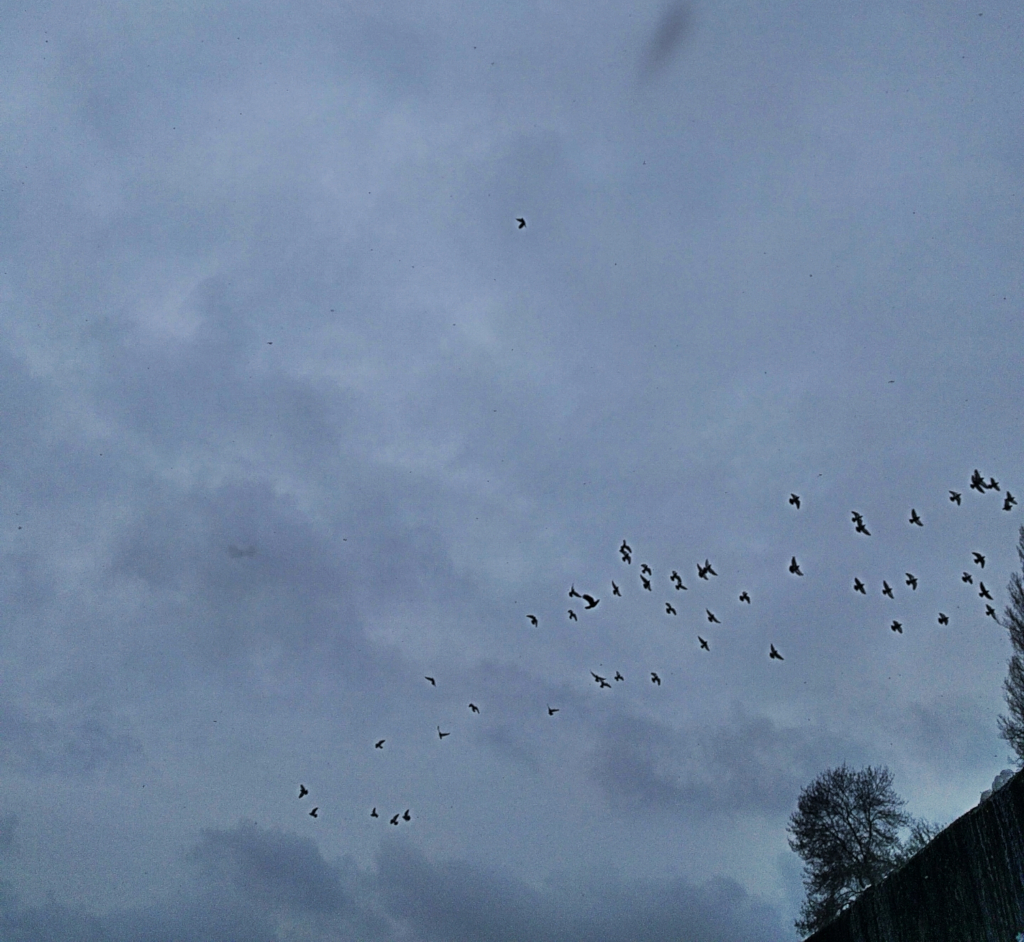 The pigeons fanned out across the frozen sky. Good ole pigeons! The thugs of the city, I call them. Never ones to miss a wild party, their presence was not surprising in the least. A nesting pair once tried to set up shop near my window, but I was having none of it and kindly told them to go somewhere else. Now, here they were putting on an aerial show as they twisted and turned in the blowing snow. A flutter of wings. Oh, pigeons sure know how to liven things up! 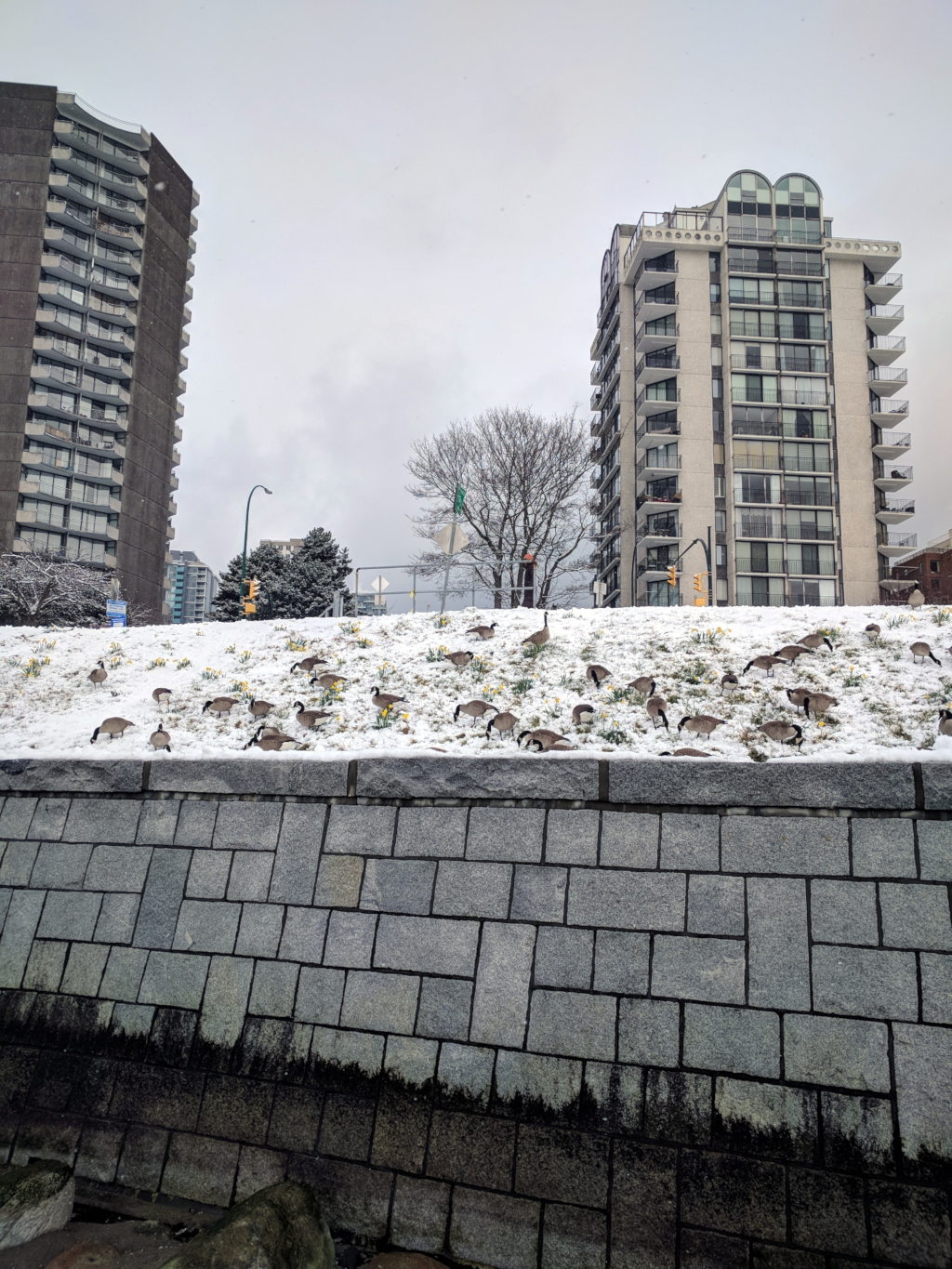 Beyond the seawall, a flock of monkish but ill-tempered Canada geese had taken control of a hill, among the daffodils covered in snow. They raised a honking racket for some reason or other, and one group took off in flight, honking all the while, and then another returned in majestic style, honking as they landed, then causing others nearby to move out of the way, honk, and take off, beating their massive wings as they flew off, the place going mad with all the grazing, the swaying and flying, and the whole lotta honking going on. 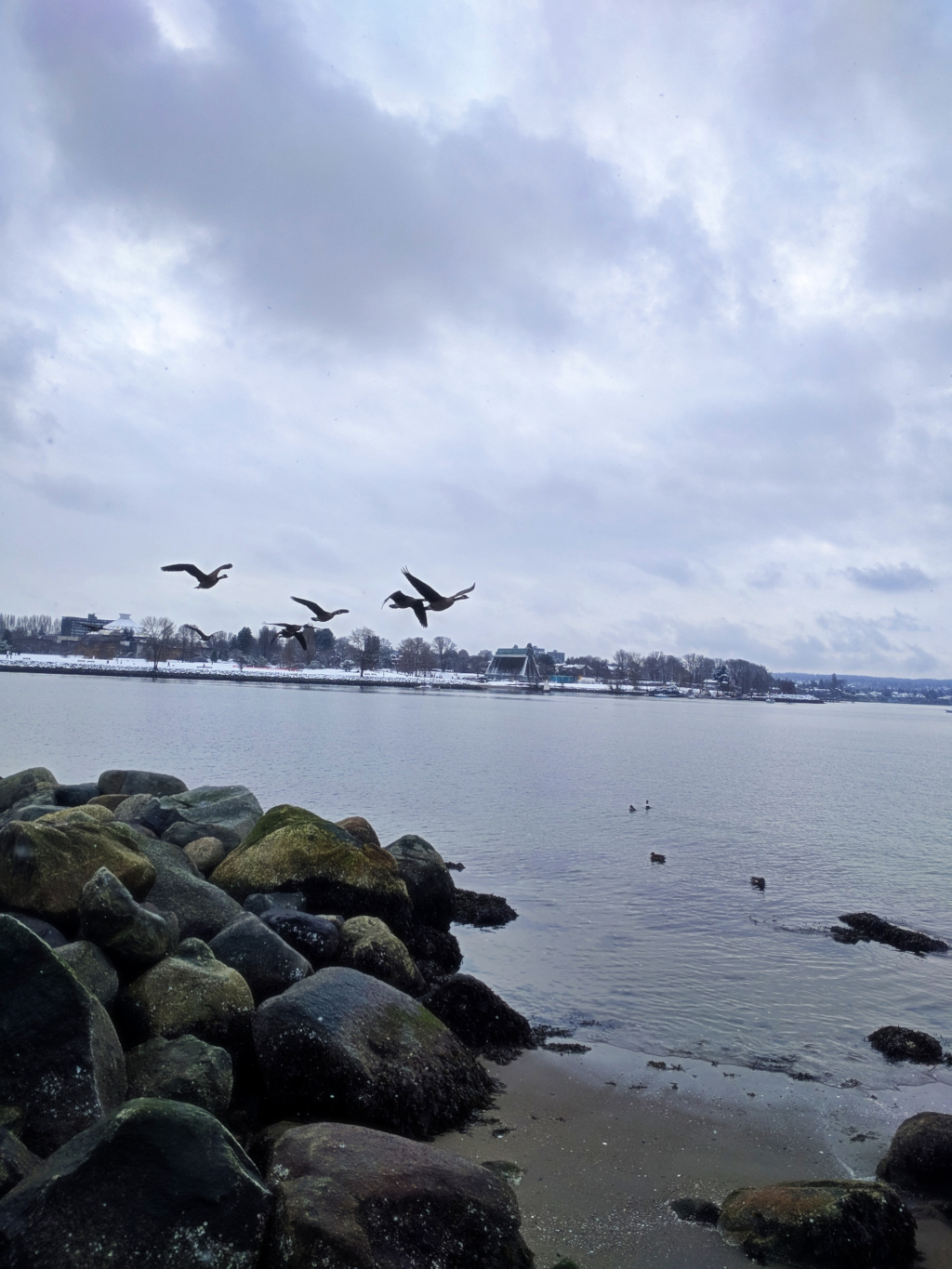 Now, tell me, does this not seem strange to you? Is this normal behavior? Ah, if only I had more time to investigate the mysteries of avian consciousness, but sadly I had get on with my journey. My destination still lay ahead, and the snow was still falling. 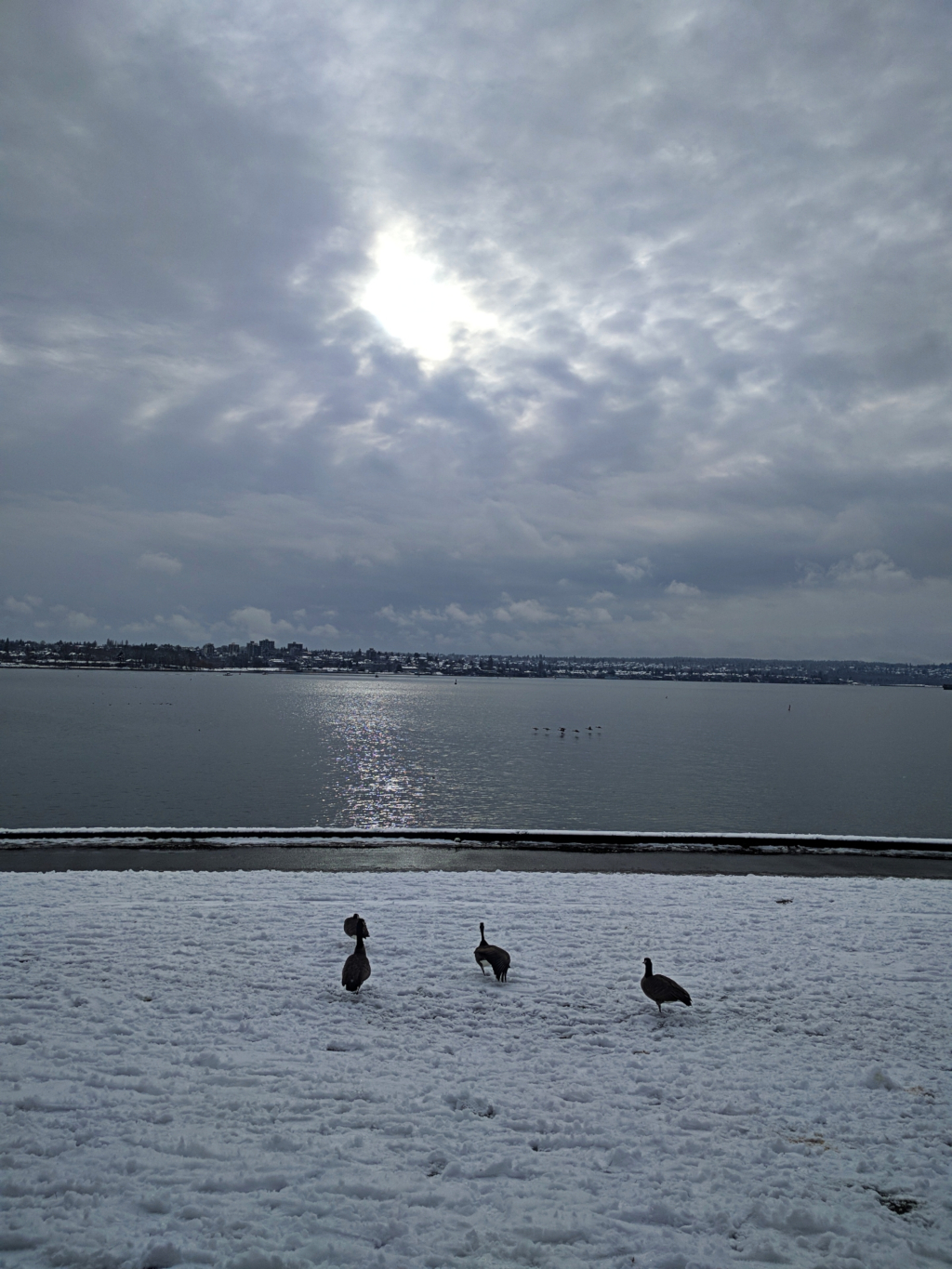 Ha! I loved your clever bird tale. Your descriptions made me laugh. This is an excellent post! 🐦😂🐦

Thank you so much @melinda010100! Our feather friends never cease to amaze me.

Congratulations @litguru! You have completed the following achievement on the Hive blockchain and have been rewarded with new badge(s) :