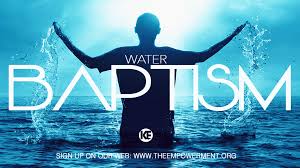 15 And he said to them, "Go into all the world and proclaim the gospel to the whole creation. 16 Whoever believes and is baptized will be saved, but whoever does not believe will be condemned. (Mark 16:15-16, ESV)
mark-16-16-2.jpg

Welcome back to my blog as we discuss this important topic in the bible. This message is also known as the Great Commission as in the sense that Jesus Christ, before his departure needed to be clear to his disciples their mandate on earth as they await for the empowerment from on high. Jesus gave them the charge and that was to "Go into all the world and proclaim the gospel to the whole creation". And it's because of this call that we all have to make the effort to spread the good news. It's for this purpose that we live.

As I have quoted above, the verse contains more than just a mandate. It also contains the warning to all creation as to their faith in the message that is to be preached by the followers of Christ. So he made it crystal clear that "Whoever believes and is baptized will be saved, but whoever does not believe will be condemned". Meaning that those who reject the gospel of Jesus Christ has already received their judgement from God.

Whoever believes in him is not condemned, but whoever does not believe is condemned already, because he has not believed in the name of the only Son of God. (John 3:18, ESV)

I must say that those who believe in the good news are not driven by fear of hell but by love for God. It's love for God that I want to go to heaven not because of the torment in hell or the gold in heaven. Having any desire for heaven aside God himself sounds idolatry to me. God is the reason and he's enough to draw all of us to himself.

The main thing I want to draw your attention to today is the words in verse 16. And the most highlighting words I want us to consider is the precedence of faith to baptism. That is that "Whoever believes and is baptized will be saved" not the other way round. Faith comes before baptism and I doubt how some churches preach baptismal regeneration. I have tried to find the root of this doctrine from the Bible but to no avail. Baptism in itself does not save anyone unless it's preceded by faith in Jesus Christ.

It's seen throughout the New Testament message that salvation is by grace through faith. But here comes the test. Why do some folks then equate baptism to salvation? As if the blood of Christ can be substituted with a ceremonial wash that signifies something spiritual. In case we don't know what baptism is, Paul makes it clear in his message to the Romans when he said "We were buried therefore with him by baptism into death, in order that, just as Christ was raised from the dead by the glory of the Father, we too might walk in newness of life." (Romans 6:4, ESV). This is a sign of our salvation and not the Salvation itself. This sign comes after the real thing. We must repent and believe before the sign can be performed thereafter.

Baptism is not for the washing of sin
As I have said earlier on, it can not replace the blood of Christ. It has no power to wash away sin. It's a sign of our regeneration. So whoever believes is baptized. Meaning that without the faith, baptism can not save anyone. I think the proceeding text confirms my argument. He said "but whoever does not believe will be condemned". So now the attention is not on baptism but on faith in Jesus.

One cannot believe and be condemned but rather can be baptised and be condemned if its done without faith in Christ Jesus. Let's think about the sinner at the right hand side of Jesus at Golgotha. Didn't he meet Jesus in paradise? Did he had to come down from the cross and undergo baptism ? No. He needed faith alone to be with the Father.

But baptism is performed in obedience to the words of our Savior, not for salvation but to teach us what happened to us when we believed and that's "We were buried therefore with him by baptism into death, in order that, just as Christ was raised from the dead by the glory of the Father, we too might walk in newness of life". If you are a Christian and you're not baptised, do so in obedience to our Lord Jesus Christ. But if you've not believed, I would rather advice you to believe the gospel and be saved.

Finally, in a nutshell, don't equate salvation to baptism: ceremony to regeneration or the blood of Jesus to water. They all have their roles and are distinct from each other. Let the blood do it's work in regeneration and baptism serve as a sign of regeneration. And always remember that whoever believes and is baptized afterwards is saved but whoever does not believe in Jesus as their source of life, is condemned in hell for eternity.