drutter (71)in Informationwar • 3 months ago

It is now clear the man leading humanity's war against Covid is also responsible for causing it. Fauci organized and funded the Wuhan research in 2014 which created the artificial SarsCoV2 virus, and released it upon the world in 2019. Why then is he not in prison, but instead on the news every day, setting public policy, shutting down the global economy, and removing our hard-fought freedoms? Not only should Fauci and everybody he worked with be tried for treason, but EVERYTHING he helped put in place - masks, vaccines, passports - should be scrapped forever. 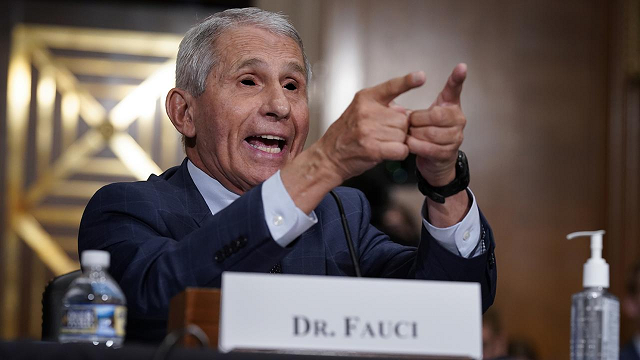 Fauci has lied under oath to Congress about the virus/pandemic multiple times. That is now widely understood. Remember "only a conspiracy theorist would say this virus could have come from a laboratory"? He has lied this whole way through, about essentially everything, and he's still lying now. Now he has been caught with his pants down, because it is confirmed that he created the virus which he claims is killing millions of humans, and risking a total societal collapse.

Turns out, just like the entire Afghanistan War, it was ALL a complete scam! This whole thing has been planned out for years, and that has now been verified beyond a shadow of a doubt. Sure, Fauci will continue to lie to the public, and the media might continue to go along with it, but anyone who can read is now able to confirm themselves that THIS ENTIRE "PANDEMIC" HAS BEEN A LIE. Which means all the harm done to society because of it was unjustified and should never have happened. Billions have suffered from the restrictions, even if "only" hundreds of millions have suffered from the man-made virus itself.

Remember Fauci screaming at Rand Paul "YOU ARE A LIAR" when accused of all this a couple months ago? Well well well, now we know Fauci was lying then, too! He's been lying about everything.

Fauci (and his team!) paid for, organized, directed, and oversaw the creation of SarsCoV2, aka "Covid-19".

Will this change everything? It should, but it won't.

Will it even change... anything?

Most likely, the narrative (written in pencil long ago) will continue to be that Fauci is a benevolent superdoctor concerned only with helping humanity beat this virus. Won't people who know he's responsible for creating the virus have an issue with that? Of course we will, but the mainstream media still holds most of the power in society. If they tell the public Fauci is a good man, that's all they need to hear. Anything that contradicts that is immediately discarded as "fake news", even if it can be easily confirmed with a single click to a well-respected source of information. In their eyes, if the front page of CNN doesn't say it in large bold letters, it didn't happen.

Hitler and his propagandists learned something which tyrannical powers around the world continue to employ today, which is that if you tell a big lie, and tell it often, people will believe it. Small lies, or lies they only hear occasionally, are easy to dispel. But lies so big they warp one's understanding of the world, told on a regular basis, simply become accepted. One theory for why this happens is that we assume a falsehood would be called out and debunked immediately, so anything seen in the mainstream must be accurate, and should therefore not be questioned. And so, absolute lies can exist as widespread truths in a society, and almost nobody is even able to perceive that anything is amiss. Those who can are either censored or discredited.

We got swindled. We should admit it and reverse course while we still can. But that's going to take people accepting the fact they've been lied to in a HUGE way, for their entire lives. This is why people "can't wake up" - the gap between what they currently understand to be true - and reality - is too wide for them to close it. They must continue to exist in a painful and uncomfortable state of cognitive dissonance as their minds try to juggle opposing belief systems that can't both be right. And they cling to their oppressors because they are deeply affected by Stockholm syndrome.

Fauci lied, people died. But it's not just about the deaths. Tens of millions more have permanent nerve damage, heart damage, and brain damage - either from the virus and its engineered spike proteins, or from the "vaccines", pushed as the only treatment available despite cheap drugs like Ivermectin being far safer and more effective.

And it's about the billions whose lives have been harmed unnecessarily. The course of human history that has been altered. The freedoms and rights we have given up in the name of fighting the virus, which will be difficult and costly to regain. The loss of trust in the practice of medicine, of real doctors, of real science. The destruction of the free market. Almost everything about humanity has been negatively impacted by Anthony Fauci and this manufactured global crisis.

Which is exactly why nothing will change. His crimes are so large, the only potential result is that he be given MORE power and MORE trust.

This isn't about the virus, it's about control. Which means complying isn't going to fix this. It ends when we collectively say "NO", and not a second sooner.

I reckon nothing happens to him. I do like how some people have become a Fauci cult of sorts and some people got him tattooed on their body. Covid has made people truly insane.

I think that he just sounds evil and when a man says he is a lifelong fan of baseball and then can't even throw the ball somewhat near the plate... i question anything that they have to say.

Yeah nothing will likely happen, which is disturbing... but like you said, it's a cult. And they don't operate on facts.

Isn't it amazing how many truths come out, indisputable truths, and yet nothing changes. And you are so right that many hoomans suffer from Stockholm syndrome. They are unable to confront their own contradictions let alone having to grappel with the notion that governments will kill their citizenry to complete an agenda. And it appears the agenda being set is the WEF "you'll own nothing, and be happy" horseshit.

I've been calling this shindig a hoax since Day one.

Good job! Too bad more haven't been doing so.
I've been calling it a scam since day one, and didn't like the word "hoax" at first, but I've looked up the word and it can definitely mean "scam" as well as other things, so it fits. It's a scam, a hoax, a plot, a trick, a racket.

#CoronaHoax sounded better than #CoronaScam.. although I was on board with #Plandemic too

Yeah Plandemic has always been good.
I also like "fuck the NWO those lying psychopath demons"... or something.
Where's the damn guillotines??

That's a pretty long tag..Plus.. "fuck the NWO those lying psychopath demons".. doesn't roll off the tongue like #CoronaHoax does..😆

Getting !LUV for that one!