Back in 2009, I lived in London working for the Financial Times. I was also doing a lot of portrait photography and was deep into the Strobist techniques which consists of learning how to light using portable flashguns. I was using flashguns regardless of if it was sunny or not. I also did some talks and group tutorials for camera clubs and groups under the name of QH Photography.

Since my move to Australia in 2012, I've slowed down and finally stopped my photography activities, occasionally taking out the gears for special occasions.

Before I left the UK for Australia and with the help of my friend Peter Thompson from SnapperJack Media, I was preparing an exhibition with portraits in the topic of Spies and Special Agents (that would be sponsored by Eye Spy Magazine) and even got some (former) real ones to pose for me. However, my family situation changed and we had to move to Australia before the end of the project.

I've today decided to publish the photos taken at the time. This post is the first of a two parts series.

The first one above has already been posted in other social media platforms of the time. It was taken with model Vik Moreno during on of the London Strobist meetup sessions in a pub. I was using 4 flash guns around the model to create this setup. You can read more about the setup on this article published at the time:
https://glyndewis.com/guest-post-vik-moreno-as-james-bond/?v=79cba1185463 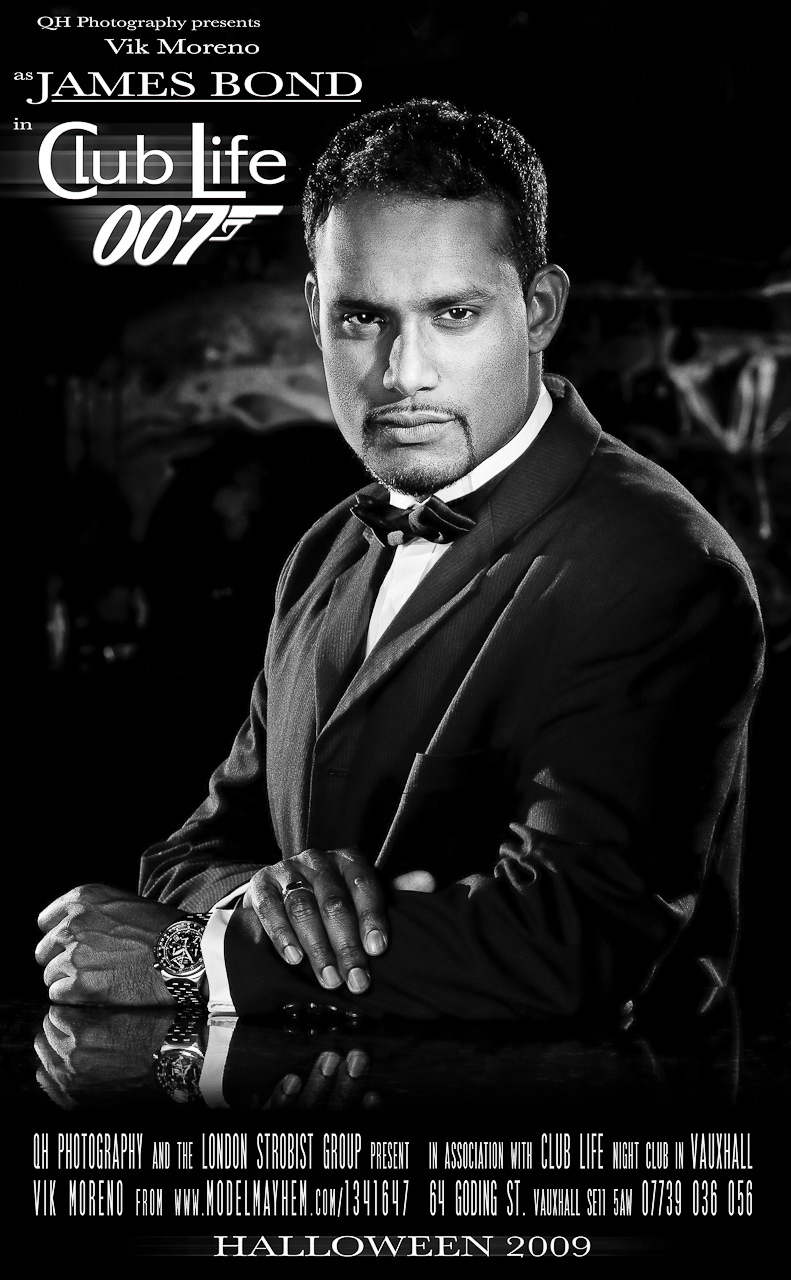 Alan was one of my first Spy related personality to pose for this project. He's running a Tour of spy related locations in London and I thought of setting up a portrait session for him at number 2 Audley Square, a street known for this lamp post used by the Russian spies in the 50s for hiding and collecting secret messages. Interestingly, number 3 Audley Square was also an office, birthplace of James Bond films. 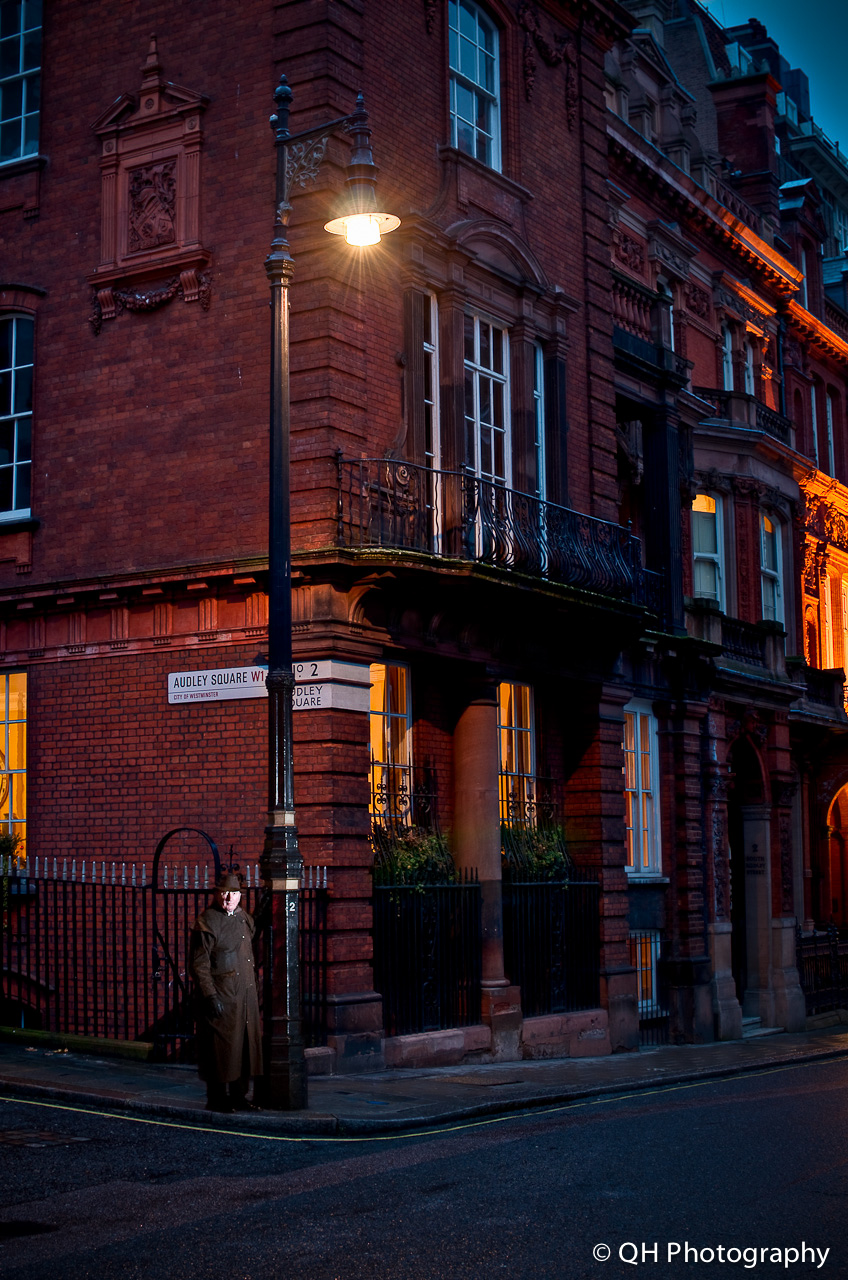 The photograph above was the one that took me most of the time to setup and edit. I had to start setting up the lights before Alan's arrival. I wanted to get the shot done during the last light so that I could capture the blueish light from the sky at the same time as street and building lights started to turn on. The resulting image was obtained by creating several layers of photos taken at different exposures and time of evening. A sing flash light was setup in the middle of the street in front and pointed at Alan's face and out of the camera's view. 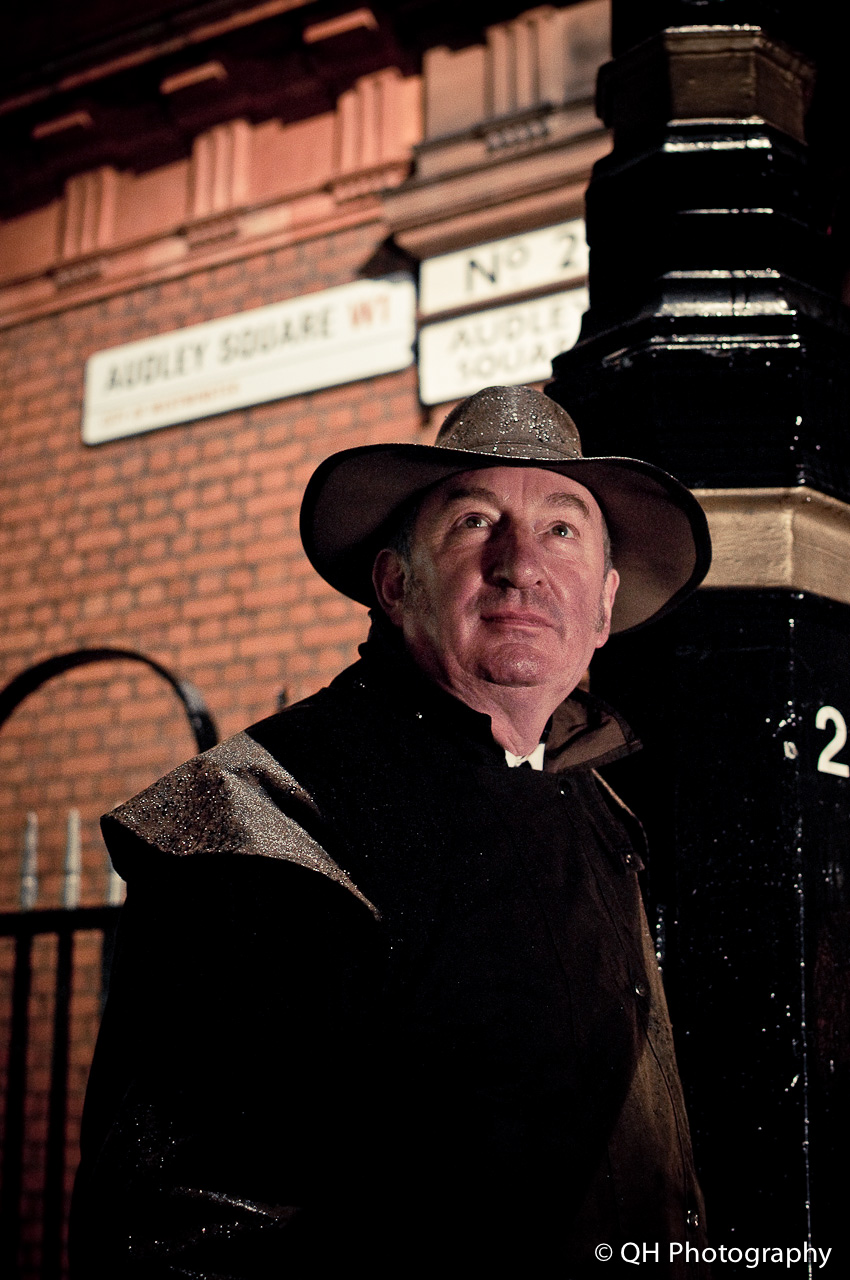 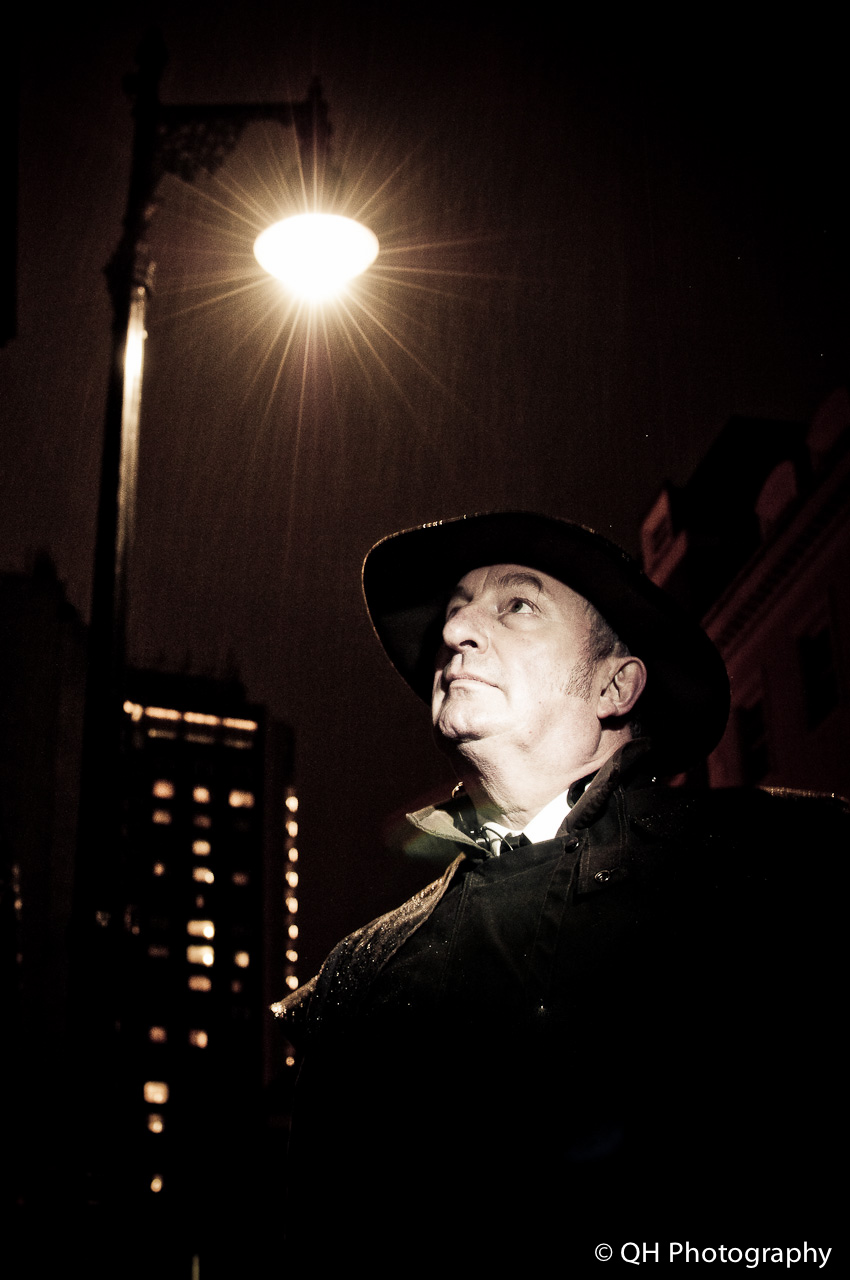 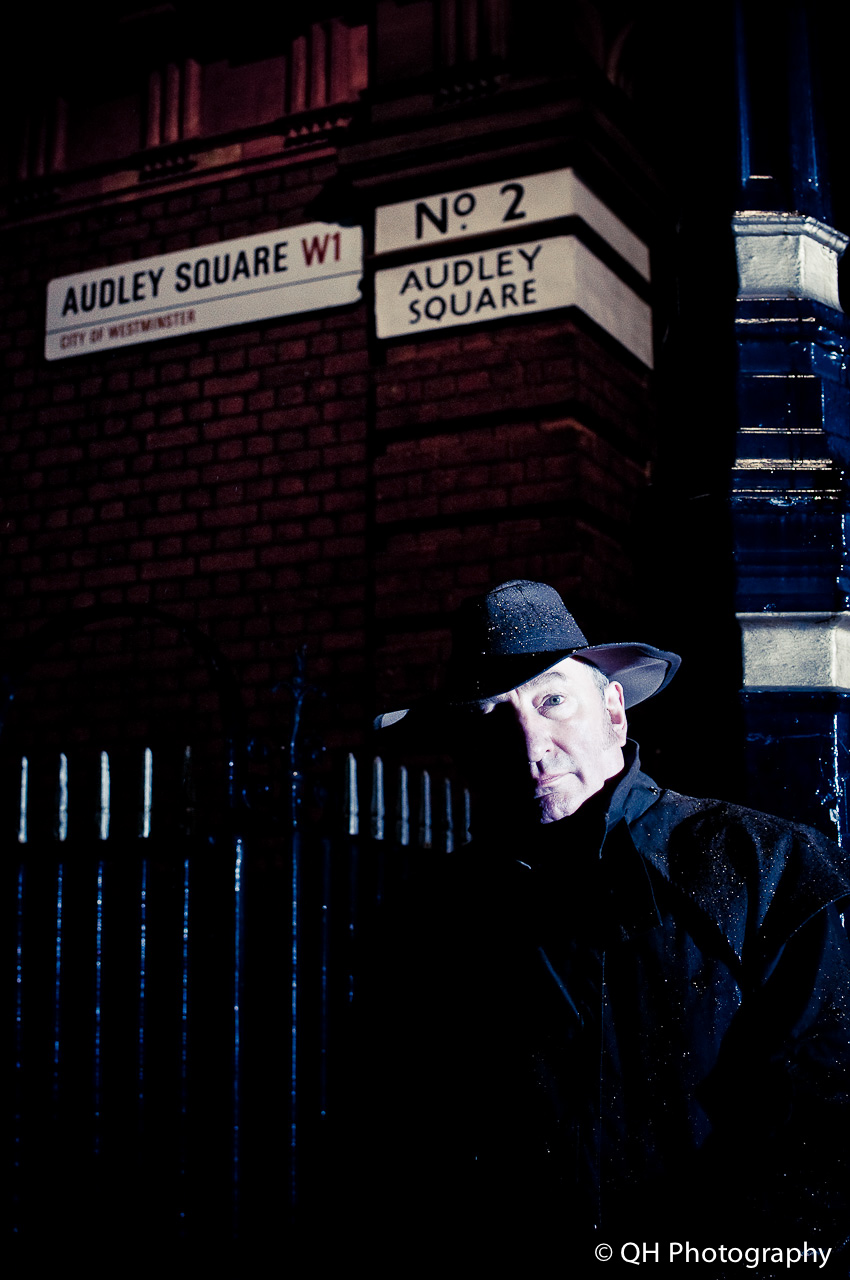 It was raining that evening so we had to wrap up as fast as we could as I didn't want the gear to get soaked. I got some good shots out of the session and some of them were published in the Eye Spy Magazine 66 2010 edition: 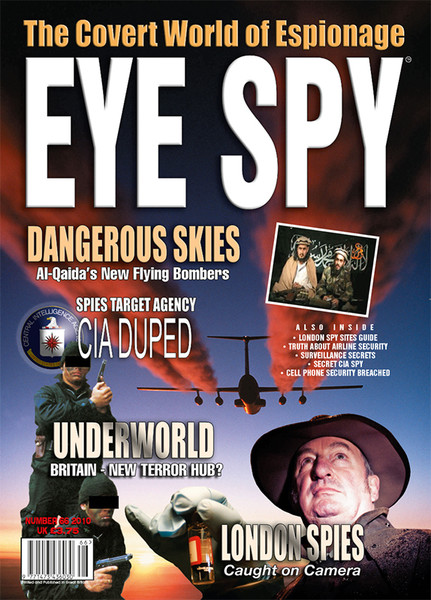 I really miss London and the UK in general and all their fantastic photographic opportunities. Wishing I will be able to take my family back there in the future so my son can see where he was born.

The picture look amazing.
One of my dream one day is to visit London. I have heard a lot about the place and will love to check it out

Thank you. London is indeed a great place to visit. The weather is not always great but it sometimes adds to the charm (old bridges at night in the mist)

Wow! Very interesting photos and story! I had no idea there’s such a walking tour in London! I wish I could visit the UK one day, so much to see and do!

Indeed, there are many things to do in the UK. I really enjoyed my years over there

The pictures are really great, specially the first one under the lamp post. You really are an amazing photographer. However with the turn of events, I really hope you get back to your hobby. It really feels happy to do what you love.
Good Luck!

I have many hobbies. It's just that I currently prefer gardening, fishing and DIY stuffs. Photography involves too much of my effort from my eyes. (viewfinder + editing on computer).

I know that's a pain for the eyes. Even I have many hobbies, dance, writing, crafts and DIY. It's good to see you haven't left yours behind, generally people do.

What I usually do with my multiple hobbies is have a period for them. Like gardening during spring and summer, fishing in autumn and winter etc...

Nice work dude, I too miss the UK at times we have such a mix of culture and history which I find hard to match In many parts of the world, I'm currently living in the Philippines but hope to get back to the UK in the near future.

Very true. It has a unique charm to it.