I Recycled Something That Was Alive... From Zero To Hero - PART 2

As I actively try to do good in this world, here's the second part of my recent good samaritan story... with a surprise ending.

Here's the first part from yesterday, starting with a huge tech recycling haul if you want some suspense.

As most guessed, I was able to get the little cat to trust me again after the "box carry" incident. It took a while, but he gradually came close enough so I could pick him up.

Once in hand, I hustled across the street a short way to my building's isolated foyer where I wanted to let him feel some safety, but not trapped. The commitment was made. He was confused and curious inside, but calm and friendly like I found him about an hour ago. He also didn't mind being held at all to help keep things low key.

After a few minutes to transition, I picked him up again and made my way upstairs to my apartment. I was absurdly tired, but knew that sleep wasn't going to happen any time soon. 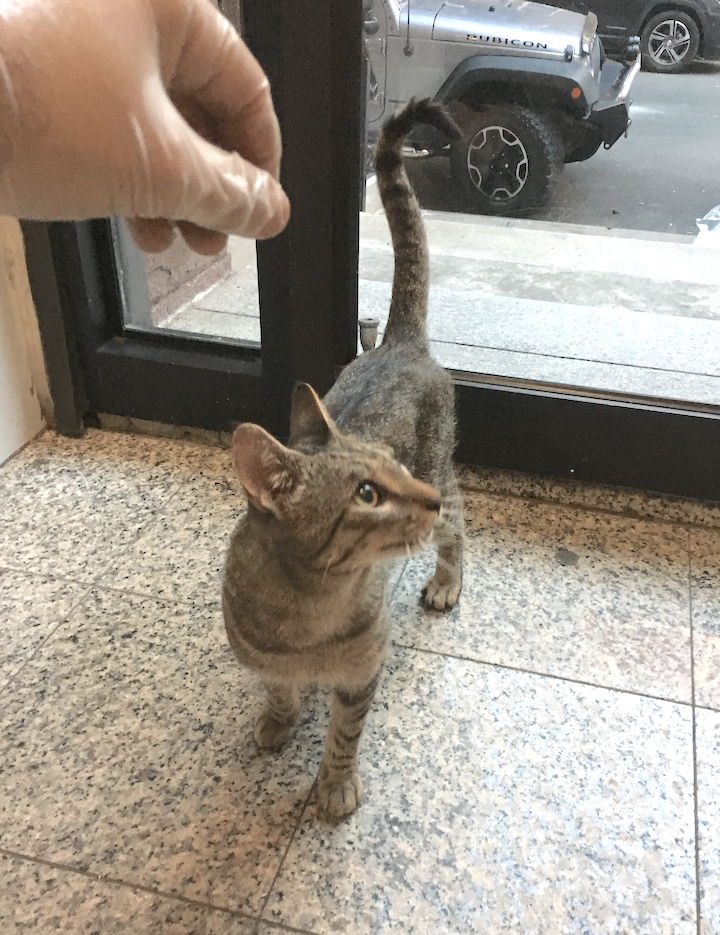 Once safely in my apartment, I felt accomplished and could unwind a little. He was surprisingly clean and soft, so I let him on my bed where he IMMEDIATELY started kneading my comforter and purring. It was a magical moment to see him realize he was safe and going to be much more cozy than outside. He was so happy and I was a bit moved.

He shifted to full play mode and I could feel all of his joy. It certainly felt like I did the right thing so far.

While I had a nice bed for him, he want over to a small resale picture station on the floor and made himself at home.

Seems pretty at ease for just being rescued. 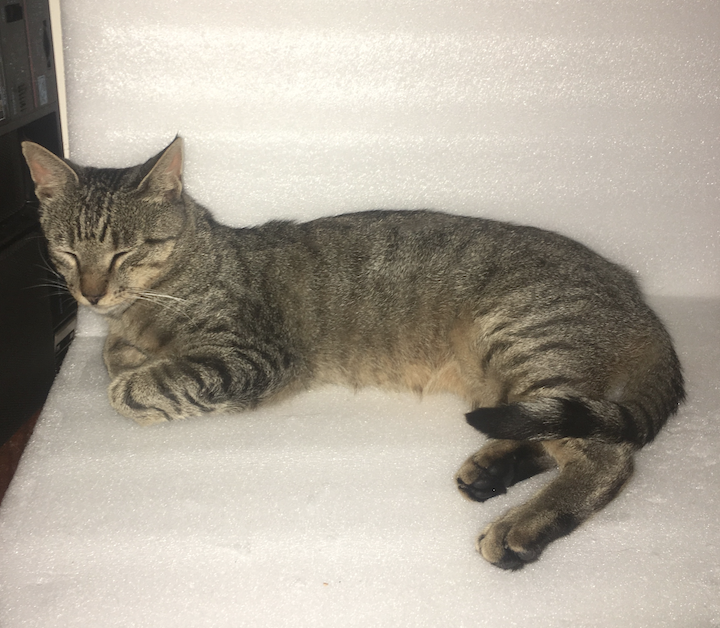 Next up came the need to run out to a deli to get litter and a can of food. I had to get something to hold him over while I'd hopefully get some sleep. As mentioned in my first post, he had a little dry food out between the cars (what made me apprehensive about taking him), but who knows when he last ate. He seemed underweight.

Thankfully, he behaved while I was gone, a good sign. I quickly put the litter in a USPS shipping box as the first priority. I then put the food into a small cat trinket bowl I also recently found outside. I tried to introduce him to the litter, but realized that it might be a bit of a challenge depending on how long he'd been outside. 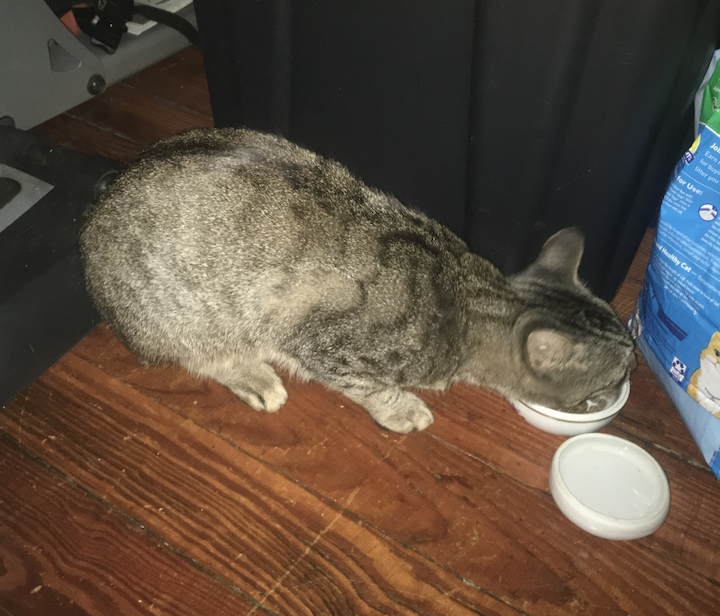 After some playing, with plenty of fear that the litter box wasn't understood yet, I went to bed. I had a feeling that we'd both sleep for a while. It was around 8:30 AM... Yawn...

After waking up around 2 PM, he was snoozing in the same spot. 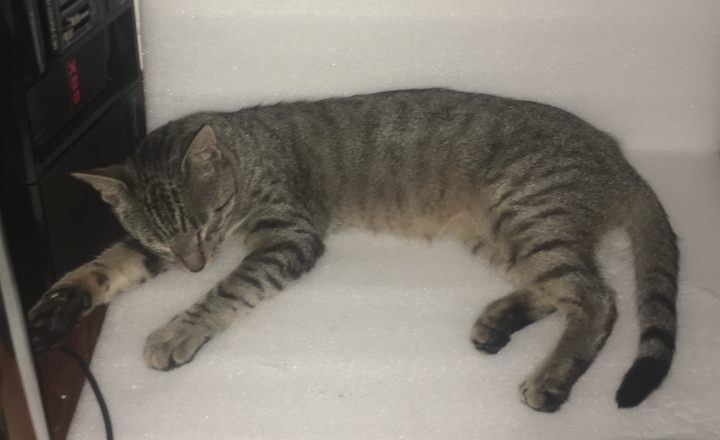 So far so good. I called him over to the bed where he was very happy and comfy. It was hard to imagine that he was roaming around for God knows how long just a few hours ago. He was definitely used to the indoors and socialized, or the quickest learner EVER. 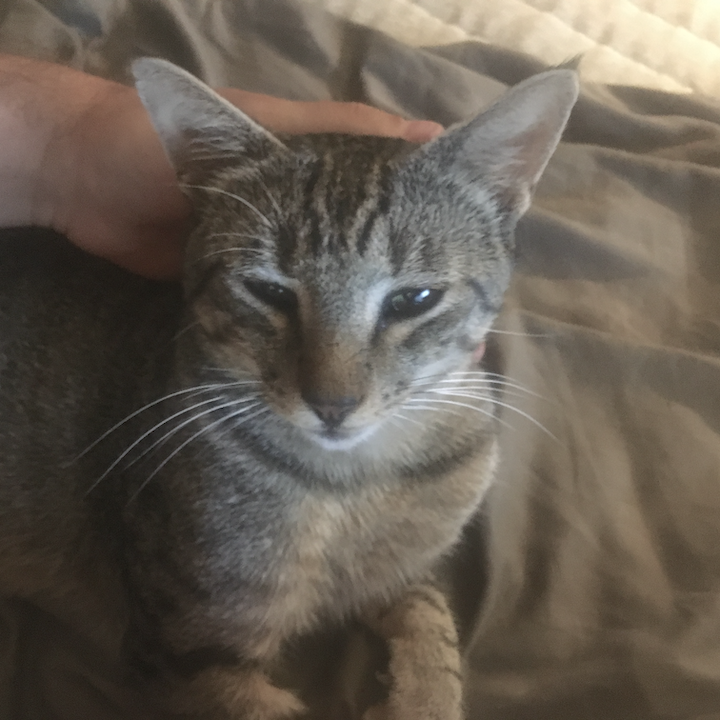 He seemed to be in his late kitten years, probably a teenager. He wasn't fixed and seemed to be a mackerel tabby. He seemed healthy and had plenty of appetite.

He was also very affectionate, felt at home in my lap, and loved every bit of attention. After not having a pet for a little over two years, it felt nice to reminisce on some of the reminders of how life was with my cat, Spike, of 13 years. A soft spot was opening for the first time in years.

At this point, my priorities were to build his trust, to get him to use the litter, and to not get too excited or attached because there might be someone looking for him. Perhaps he was chipped to help figure that out. I also slowly told a few friends of the find who searched local apps and listings with no clear matches.

Thank GOD I was paying attention as he propped up on the end of my bed and started pooping diarrhea. I had just enough time to grab a plastic shopping bag on my bed and catch it all in mid air. Yuck, but a miraculous victory with all things considered. This actually helped me relax because it meant that he wouldn't need to go again for a while.

I then went with my neighbor to a pet store to get some essentials for the short term. This included dry and wet food (not the cheap stuff), a litter scooper, some chicken treats, and a squeaky mouse toy. He had chased a bug and some birds when we were outside earlier, so I wanted him to have an outlet for his inner hunter so it wasn't used on my bedding or resale items.

My baseball friends had previously invited me out for the night, but I had to cancel. It was too soon to leave him alone, and I really needed to work on getting him to use the litter. They gave me sh*t for bailing, exactly what I needed more of...

At around 8 PM, he magically used the litter box to pee. Given what happened the last time, I was overjoyed and relieved. I snapped this pic while cheering him on and getting the chicken treats ready. Hope of not sleeping in complete fear of a mess or two in the morning was now non-zero. With baseball the next day, I really needed it.

Sleep happened. It was great. He slept in a corner of my main room under my exercise machine.

When I woke up, there it was... diarrhea on the end of my bed at the same spot where I caught it the day before. Grrrrrr.

I cleaned it up and put him in the box again to remind him. We hung around a bit, and then I called my local vet 3 blocks away to see if I could bring him in to be scanned for a chip. This was a big checkpoint. The receptionist said that I could call back on Monday when the techs were in, and that she could give me her own cat carrier since she lived very close. I didn't have one and she sounded cute/looking to go out of her way to meet me, so we agreed to meet the following day.

I then went to baseball, had an outstanding game, hung out with some teammates after, and then came home expecting to find another mess.

Before leaving, I covered my bed with shipping boxes as insurance. Well, it was a good thing that I did because he pooped on one. Sadly, the lack of rigidity of his stool went through the cardboard and onto my bedding... AGAIN. Lesson learned. On the bright side, he peed in the litter box, so it seemed like half the problem was solved.

Some QT and then bed time.

The next day, I called the vet as instructed, but they refused to scan him without an appointment due to COVID concerns! WTF. THE ASPCA was also not accepting non-emergency cases. DAMN. Now what?

My friend said that you can often feel a chip in the nape of their neck, so I tried. Nothing seemed to be there. That was a good thing for my prospects of potentially keeping him.

I then met the weekend receptionist to get her cat carrier, who predictably showed up in a tight pink dress. Sadly, not my type because she was nice with the stage for success set (caring cat rescuer/baseball player down the road). Several complimentary texts followed, but I didn't lead her on. She did offer to secretly scan him next weekend when she was working once the vet left. This was super nice of her.

So with no clues of a lost cat, and 6 days until hopefully getting a scan... all I could do was look for signs and try not to get attached. No name would be assigned.

Things would've been SO much easier if the vet (where I was previously a customer) cooperated, and with regular litter box use. Realistically, I did rescue a potential stray or lost cat on the sidewalk at 5 AM two days before, so it wasn't going to be easy street.

Jesus, this story is getting long. I'll have to cut it off here and post the grand heartwarming finale tomorrow. It's super late and I need to get some sleep.

Thank YOU for sticking around. The last installment will be a nice read.

P.S. A big box of Legos recently fell and broke my "o" and "i" keys on my laptop, so typing to copy and paste most of these letters makes writing this all out very difficult. I might have to use my phone going forward.

Check back soon for the finale.

Didnt know you had animals
(Or does a drum set count?)