zeroeclipsee (57)in Deep Dives • 3 months ago As the Fourth Industrial Revolution dawns upon us and day by day we see the increase in smart cities, "green" technology, hyperscale data centers, 5G/6G, and other key infrastructures to this, it can't be forgotten just how global shapers plan to obtain the resources necessary for this. The fact of the matter is that the land alone does not provide enough mineral resources for these agendas; so after the exploitation of the environment, especially in the Global South, the fairly unexplored seabed will become a new target of commercial plundering. 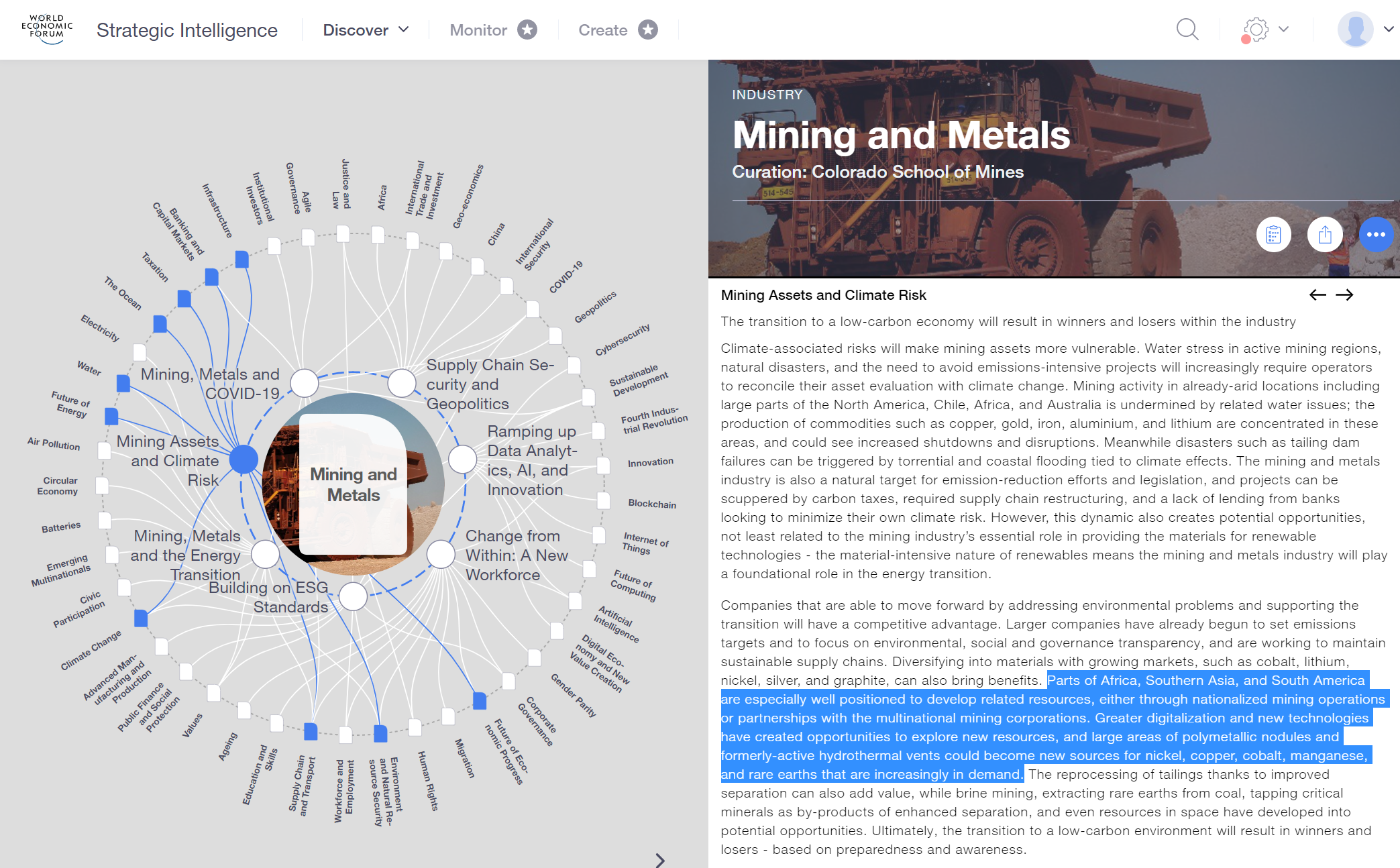 This fact is something recognised by governments, scientists, and corporations alike. Scientific literature has already noted the presence of mineral resources in high demand such as copper, lead, and seafloor massive sulfides (SMS) found around hydrothermal vents and nodules containing nickel, cobalt, and manganese along the ocean floor. With the discovery of these metals and other rare earth minerals at the bottom of the ocean, seabed mining was immediately put in place as a theoretical alternative to conventional land mining.

(Subjects of "exploration" as shown on the International Seabed Authority's website)

After years of deep sea mining only being considered a theoretical alternative, concrete steps have been taken to ensure that commercial seabed mining becomes a complete reality; and it is particularly the 4IR's infrastructural demands which have accelerated this. As of today, the International Seabed Authority (ISA), the primary body in charge of trying to regulate activity on the ocean floor, has granted governments and businesses a total of 31 contracts for "exploration" (the present euphemism for exploitation). The contracts cover prominent areas in the Clarion-Clipperton Fracture Zone, Central Indian Ocean Basin, South West Indian Ridge, Central Indian Ridge, Mid-Atlantic Ridge, and the cobalt-rich crusts in the Western Pacific Ocean. While a full Mining Code has not been established by the ISA yet, it is very much being actively drafted. Furthermore, in recent news the island nation of Nauru in the Pacific region invoked a "two-year rule" based in the UN Convention on the Law of the Sea which would make the ISA fast-track its establishment of deep-sea mining regulations and allow mining to go ahead within the next two years. The ISA, with little oversight, has struggled for a while to establish regulations for deep-sea mining yet commercial and state pressure is reaching a point where the organisation will have to act on that, unfortunately it will most likely not be in favor of the marine environment. Many scientists and environmental advocacy groups have rightfully called for a moratorium on seabed mining, which seems in good faith given not only the averse effects mining would have on the marine environment but also the fact that we still know so little about the bottom of our oceans.

We can't be surprised either by the lack of concrete regulation around deep-sea mining, because for now we can only speculate the effects that widespread seabed mining would have on the environment, and it obviously doesn't look good. Because of the interconnectedness of marine environments there are several possible ways in which seabed mining can affect different species across different trophic levels and environments within the ocean. First there are the effects on the immediate environment, in which the uprooting of the nodules from the seabed would tear up the substrate and destroy the habitats of animals who live on and around those nodules. The noise and light pollution coming from these machines would also most likely permanently impair marine organisms used to living in complete darkness. Scientists also generally agree that removing these nodules from the seabed and around hydrothermal vents would effectively remove them permanently, for they take millions of years to form; so the effects on deep-sea environments would be long lasting. Beyond the destruction of the immediate environment around the mined resources the effects could be much broader primarily due to the large sediment plumes that would be stirred up by the machinery. These sediment plumes could spread across the seafloor to smother other animals, or they could rise up and impact the phytoplankton higher up in the water column and create a choking or clogging effect on filter feeders. There are too many averse effects that can take place with deep sea mining so one can perfectly understand why despite years commercial pressure the race to mine the ocean floor is just now picking up. 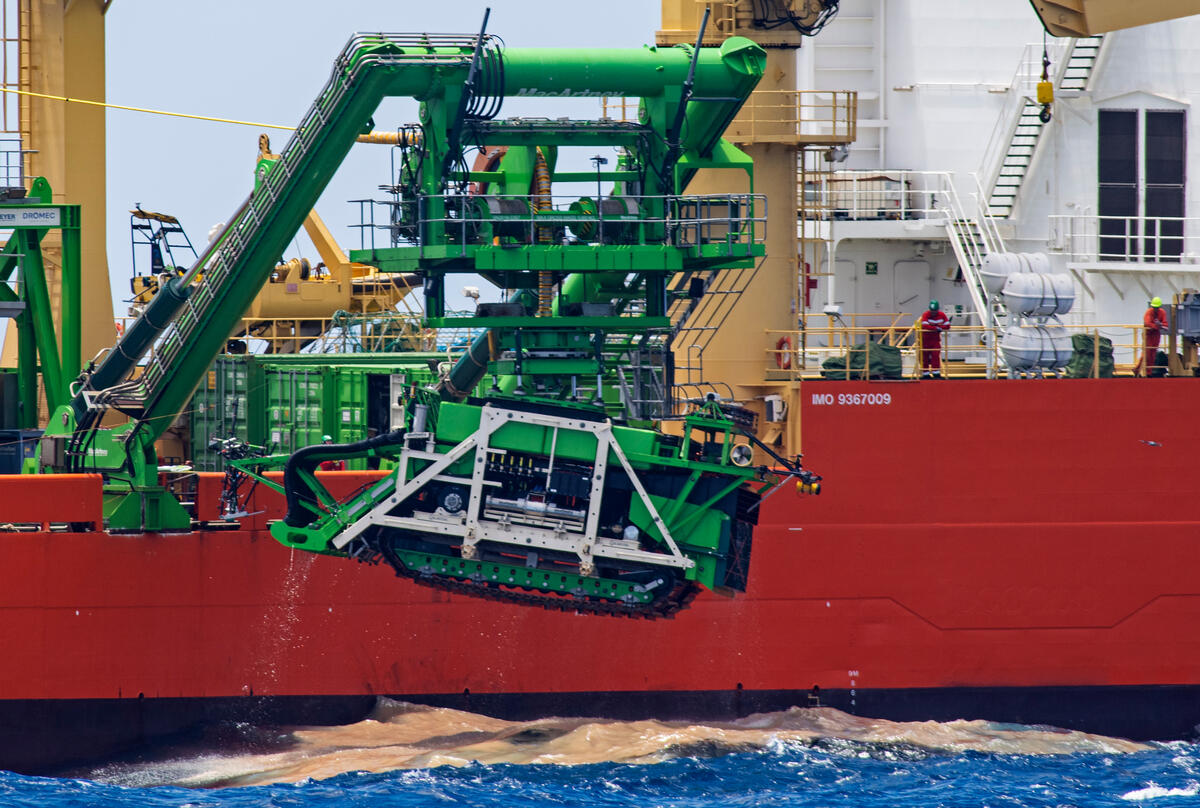 Unfortunately despite the potential environmental impacts of deep-sea mining I do reiterate that corporations and governments are going full steam ahead with it. The above picture is of Patania II, a nodule collector which was being tested in the Clarion Clipperton Zone. The first thing I want to point out which alarms me is the sediment plume clearly brought up to the surface by this machine. That machine was a part of deep sea mining trial runs held by the company Global Sea Mineral Resources (GSR), a subsidiary of Belgian company DEME, part of the World Economic Forum's Global Battery Alliance. While a supposed "dialogue" on deep sea mining is being promoted by the WEF and its partners such as Salesforce through Marc Benioff's Ocean Initiative, these talks are ultimately rooted in the view of the ocean as an asset. The ocean is a source of life, of the very first forms of life ever seen on this earth, not a commodity. We barely know anything about our beautiful seafloor yet at the whims of the people who are already destroying the land the marine ecosystem is to be targeted yet again. Deep-sea mining is a part of a reoccurring theme across the 4IR agenda and that is the commodification of nature. We risk destroying nature and our humanity if we continue to enable such a hyper-materialist and exploitative view held by the current global shapers.

Congratulations @zeroeclipsee! You have completed the following achievement on the Hive blockchain and have been rewarded with new badge(s) :

Yes, I'm glad that at least some people are paying attention to this but that number definitely needs to grow. Thank you though.