Tomorrow (May 4th) is a Major Milestone in the history of Hive: Supply Flippening

Did you know that since the Hive/Steem hard fork in March 2020, over 5.3 million more Hive was created than Steem?

Historically, both Steem and Hive have had the problem that inflation is a) not entirely predictable and b) typically higher than intended. It's the 'excess inflation problem' and I wrote about it here, highlighting the difference between Hive and Steem inflation only a short period after the split*. Since I wrote that post, Hive inflated considerably more than Steem, by about 5 million in total between the hard fork and March 2021.

However, that is only the difference between Hive and Steem since the fork - to understand the full scale of the problem we have to look back to hard fork 16, all the way back in November 2016. Steem forked to a new inflation curve that would start off at 9.5% per year, and gradually decrease (it should be about 7% now). If Steem had actually inflated at 9.5% per year, by November 2020 there would be ~282 million Steem and Hive in existence. Instead there was ~372 million Steem and ~376 million Hive. In both cases, over those four years there was 90+ million excess Steem/Hive created more than the intended schedule.

In Hive hard fork 24, a feature was added that allowed users to donate Hive to the DHF. Importantly, that Hive would be instantly converted to HBD at the feed rate. In February 2021 @smooth proposed the HBD Stabilizer system, which would exploit this feature to use DHF capital to create a downward pressure on HBD price whenever it was incorrectly priced above $1 by the market. This would not only put pressure on HBD price to return to $1, but it would also remove Hive from supply in two ways. First, all bought Hive would be converted to HBD and instantly removed from current supply, secondly most of that HBD itself would be in the DHF where it would only be released by consensus. Additionally, upwards price pressure on Hive could also reduce the virtual supply of Hive. @hbdstabilizer first started receiving funds from the DHF on February 20th. 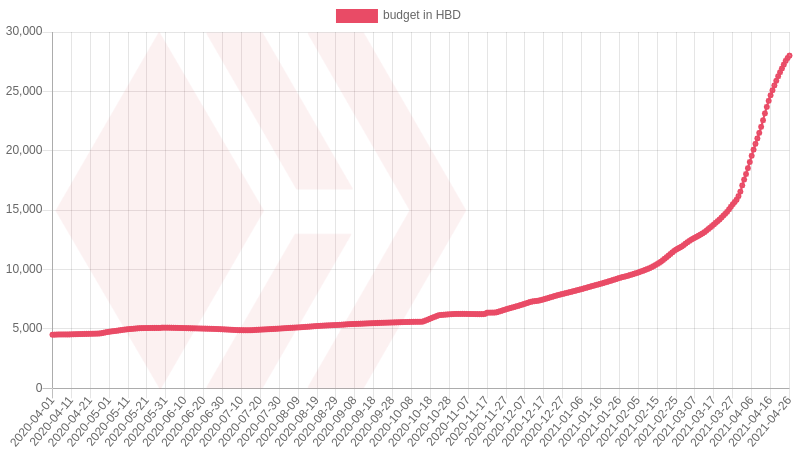 Daily budget of the DHF. Source

Though HBD has not been stable since this project began, it has been extremely successful at eliminating Hive supply. On 31st March 2021, the stabilizer had grown so much capital for the DHF, that it was able to buy more Hive than the non-virtual inflation rate per day, officially making Hive deflationary, and that deflation rate has continued to grow. With Steem continuing to inflate ~62,000 Steem per day and Hive deflationary, the difference in supply has been rapidly narrowing. At the time of writing the supply difference is a mere 104,601. I expect by this time tomorrow, Steem supply will exceed Hive supply, the "supply flippening".

Let that sink in. In just over 10 weeks of operation, @hbdstabilizer has eliminated a difference of 5.4 million between the supply of Hive and Steem

Inflation May Still Be A Problem

It is not completely clear that we have solved the Hive inflation problem. All the Hive supply was converted into HBD. A large part of that is now in the DHF and unlikely to be released any time soon. However, another large portion was released as HBD inflation. That could come back and bite us - if demand for HBD is not high enough to keep it at $1, the stabilizer will cease buying Hive and we may see the HBD be converted back into liquid Hive - contributing again to increasing inflation. The current rate of deflation is due to the fact that we can exploit massive overpricing of HBD - that is something which can't be expected to continue indefinitely.

What has changed substantially is that the Hive community, stakeholders and witnesses are thinking about managing inflation again.

The key difference between now and 1 year ago is that smart people are actually addressing the problem, with the capital of the DHF available, and encouraging demand to hold HBD without converting. For that reason I believe that this time - Hive will continue to have much lower inflation than Steem, and perhaps finally having a functional decentralized stablecoin to boot.

* At that time I made a prediction, that inflation would be worse for Steem, based on the fact that Steem had inflated more in that initial short time, and the price performance of Steem/Hive after the fork. That turned out to way off, because Steem performed better in price and there was higher demand for SBD. HBD was converted far more over the next year, and at low prices. This is part of the inherent problem of inflation in Steem/Hive - it is dependent on pricing, which itself is impossible to predict.

Let that sink in. In just over 10 weeks of operation, @hbdstabilizer has eliminated a difference of 5.4 million between the supply of Hive and Steem

And, for now at least, it is still accelerating.

I'm trying to understand this that someone sent me, but it appears this might be your account that is buying lots of HBD? What is the purpose of that? https://wallet.hive.blog/@teamsmooth-mm/transfers

Don't most crypto coins have inflation issues? I trust that some smart people are looking at ways to deal with it. I see HBD is $2, but SBD is over $8, so Steemit don't seem to care much. I tend to convert most of my HBD to HIVE if that helps at all, but it's not huge amounts anyway. We need to be aware of how we can be helping the platform. We all stand to gain if it increases in value.

Cheers for the update.

Most cryptocurrencies have predictable inflation rates. Steem and Hive are unusual in this.

I trust that some smart people are looking at ways to deal with it.

Historically that has not been the case. It has not been a high priority issue, there haven't been any major changes to address inflation as a problem since hard fork 16. Thankfully now it has returned as something people are thinking about.

I guess unpredictability does not inspire confidence. Do you get involved with any of the discussions amongst whales and witnesses? With their big stakes they ought to be concerned. I am just amazed that STEEM does so well when the issues are well known, but either speculators don't care or there are people actively manipulating the price.

I mostly just try to highlight issues that I see by posting and commenting on Hive.

I think speculators in crypto mostly don't care about fundamentals at all - or care only about very superficial fundamentals. What is interesting about the stabilizer is that it's a powerful engine to exploit the inefficiency of the crypto market, to the benefit of all Hive holders.

@demotruk! I sent you a slice of $PIZZA on behalf of @steevc.