penguinpablo (75)in Hive Statistics • 19 days ago

Welcome to my Hive vs Steem Stats Report for Saturday, June 13, 2020. All data is collected directly from the Steem and Hive blockchains and is based on UTC time. 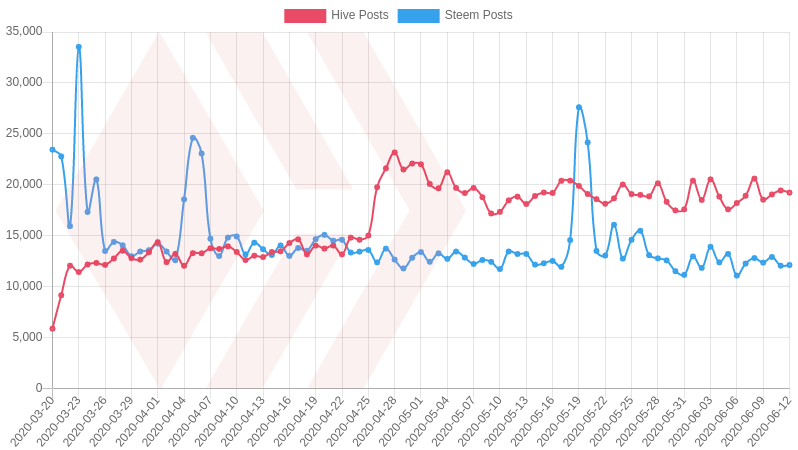 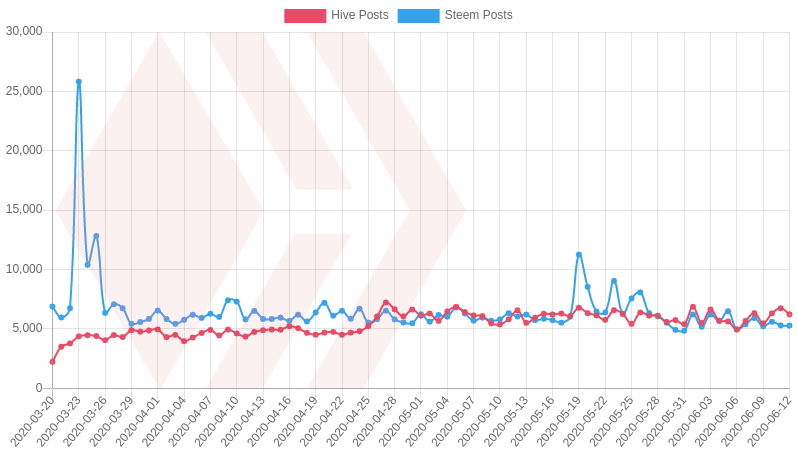 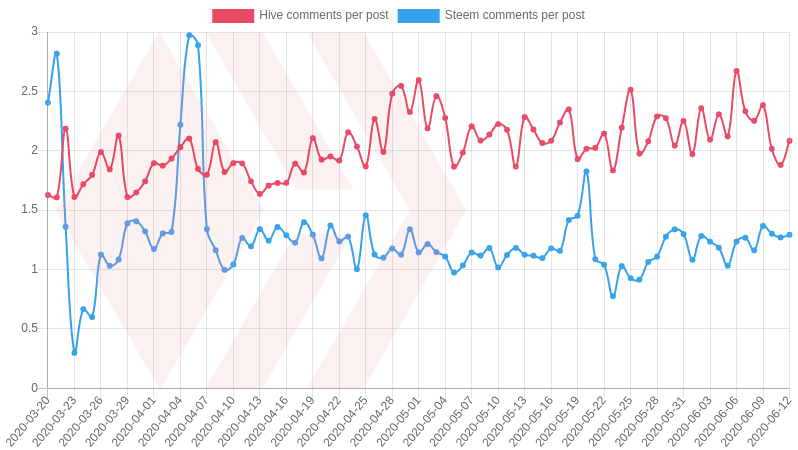 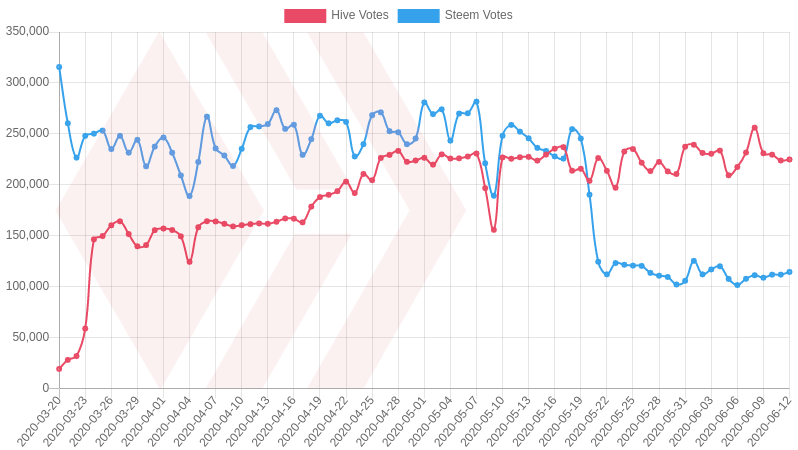 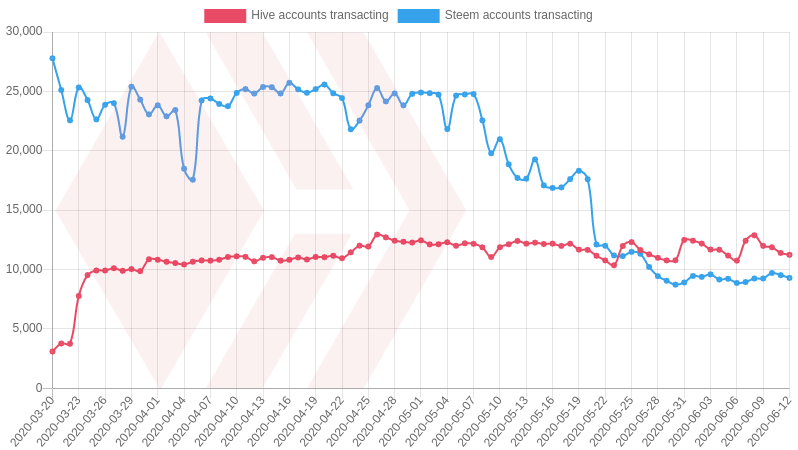 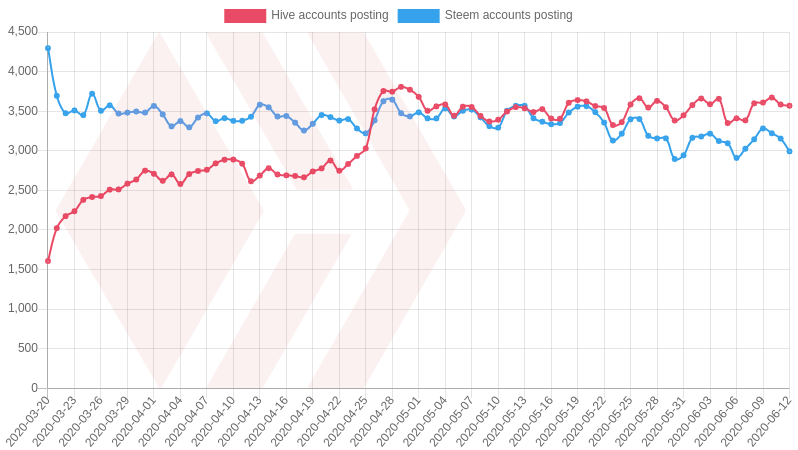 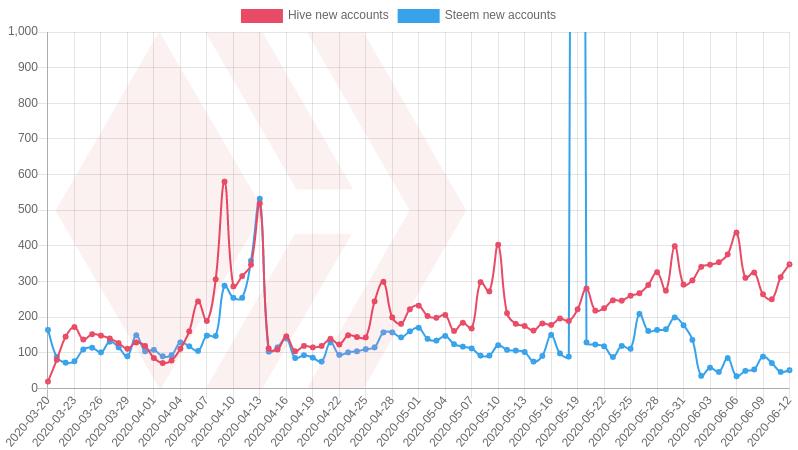 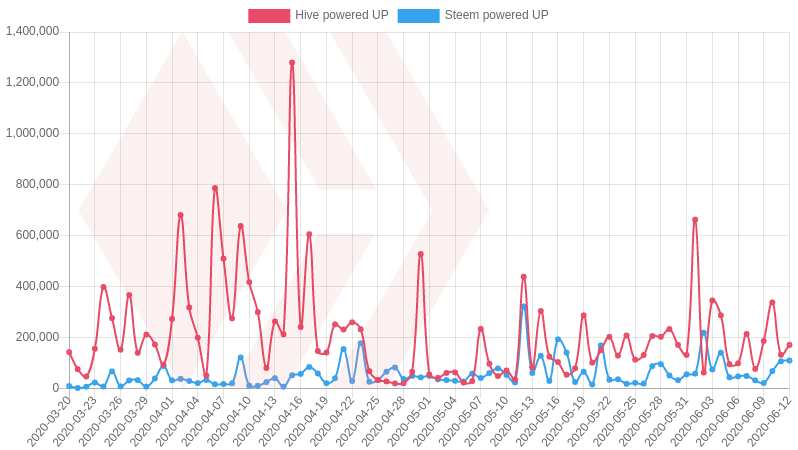 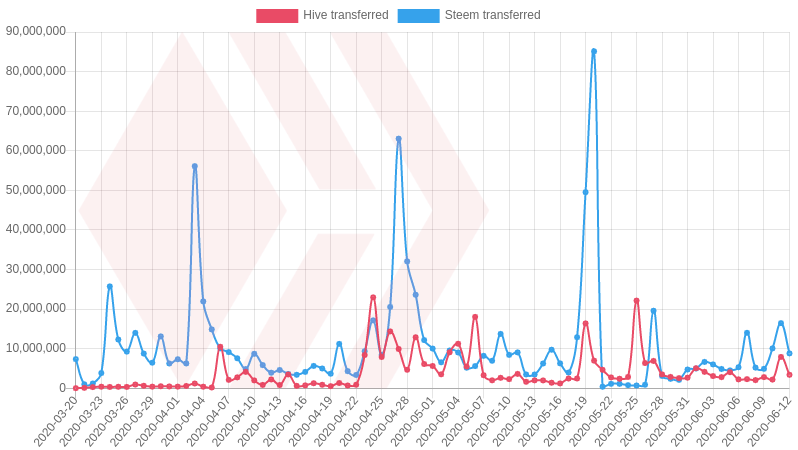 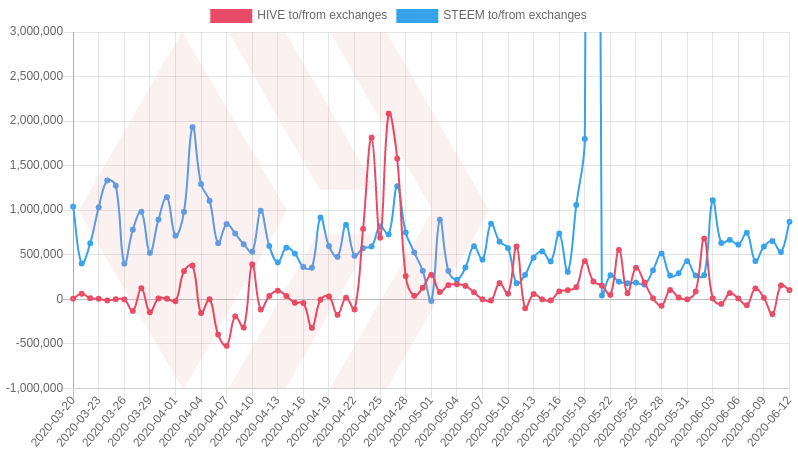 Imagine powering up Steem at a time like this. Your stake is literally hostage to Justin Sun's whims.

A week ago I would have agreed. Then I meet our honoured witness pfunk — Not tagging him in for reasons.

The truth is that with the airdrop blacklist the Hive witnesses have shown that they can and will take funds away as well.

Morals aside: The hive witnesses have the same type of wallet emptying software in place as Justin Sun. Actually: rumour has it that Justing copied the airdrop blacklist software for his heist.

And with witnesses in place like pfunk that is quite a worrying prospect.

I decided to HOLDR my current funds but will not do any additional investment in either chain.

The network has always been secured by decentralization and game theory, not a lack of software or technical inability to seize funds.

The truth is that with the airdrop blacklist the Hive witnesses have shown that they can and will take funds away as well.

Not granting tokens in a newly created branch chain (Hive did not exist before March 20th and nobody was entitled to Hive before it existed) is very much not the same. You can't have something that you never had 'seized' from you.

The network has always been secured by decentralization and game theory, not a lack of software or technical inability to seize funds.

Yes, and as far as I see it decentralisation and game theory did not prevent the seizure of funds. As such Delegated Proof of Stake itself has been proven a failure.

The blockchain gurus who where critical of Proof of Stake and said that Prove of Work is the only way had been right.

Not granting tokens in a newly…

I said “Morals aside”. Purely from technical point it was the same operation.

Hive was not created as an empty chain and then accounts got airdropped. Hive was hard forked from an existed blockchain with all previous operation intact.

For a short time those blacklisted accounts had their hive tokens airdropped and then those token where taken away with the very first block produced the hive witnesses.

Morally one can argue that is was an “exclusion” but technically it was a confiscation which can be repeated with every future first block of every future hard fork.

As Steem demonstrated by presumably using the very same code to do such a confiscation.

This is much bigger than Hive vs Steem. The underlying principles of Delegated Proof of Stake need to be questioned.

You mentioned game theory which is all about self interest vs common good and short vs long term gain. As well as forgiveness vs punishment of bad actors.

And the latter is a quite interesting part of game theory: A game with overly harsh punishment for bad actors fails and fast as cooperation dissolves.

Forgiveness is an important part of game theory and both chains failed on that one.

Yes, and as far as I see it decentralisation and game theory did not prevent the seizure of funds. As such Delegated Proof of Stake itself has been proven a failure.

The issue here is that you see this as "seizure of funds" where few others see it this way. The game theory of DPOS naturally involves human perception. The vast majority of us do not see any seizure. Prior to the first Hive block, only Steem existed. After the first Hive block, Hive and Steem were created. The new balances after the first block represent new tokens which mostly but not entirely mirror the balances in the prior Steem block.

It has never been a technical challenge to do this. The security of our tokens is entirely in our responses to the action as participants. Because we do not see it as a seizure, people don't generally have a problem with it. Other circumstances would provoke different reactions. A seizure of Hive without the creation of new tokens, a new brand and chain etc. has very different game theory outcomes. Most people here don't see it the way you do because we don't see a seizure having happened in the first place.

Have you overlooked my first sentence?

A week ago I would have agreed. Then I meet our honoured witness pfunk

“honoured“ was meant sarcastically. You might want to look at the amount insults and revenge phantasies in the comments of this witness.

This is absolutely the kind of witness which would do another confiscation round at the next hard fork.

The vast majority of us do not see any seizure.

This is not an argument as the vast majority can be wrong.

And there quite a lot of people who considered the air drop exclusion to have been wrong. Especially since the script used for the list was faulty and added innocent people on the list.

'Bandwagon' is only a fallacy when we're not talking about something which is contingent on human views and behaviour. What people believe about the situation is a factor in how the game theory plays out, not just in DPOS but in all extant crypto financial systems.

You are saying that the same thing can happen in any hard fork, but it's not true. The viability of such an action is dependent on how participants view it, and people would view it differently than this situation.

and people would view it differently than this situation.

You don't know that.

From the Steem soft fork 0.22.2 up and including Steem hard fork 0.23.0 I have seen people on both chains defending the actions of “there” chain as justified — accepting the explanation of the witnesses without questioning.

I see no reason why this trend should change now.

Needless to say that I personally speak out against all of the above and on both chains.

I guess we have a lot of bot accounts that may be voting. I know a certain person uses his 50 accounts to downvote me, but most have no real HP. We need more real users, but we seem to be ahead of Steem and a few more people have been moving over lately.

Hi paplo, i love your reports. I would also love to see total accounts + growth. That would be a nice to see IMO :)

It is cool to see the progress made by the Hive blockchain. :)

Apart from accounts created I see no progress but stability. Which is not a bad thing.

You right because the split was intense and not cool.

Hey @penguinpablo, here is a little bit of BEER from @pixresteemer for you. Enjoy it!

Congratulations @penguinpablo! You have completed the following achievement on the Hive blockchain and have been rewarded with new badge(s) :