Welcome to my Hive vs Steem Stats Report for Saturday, November 7, 2020. All data is collected directly from the Steem and Hive blockchains and is based on UTC time. 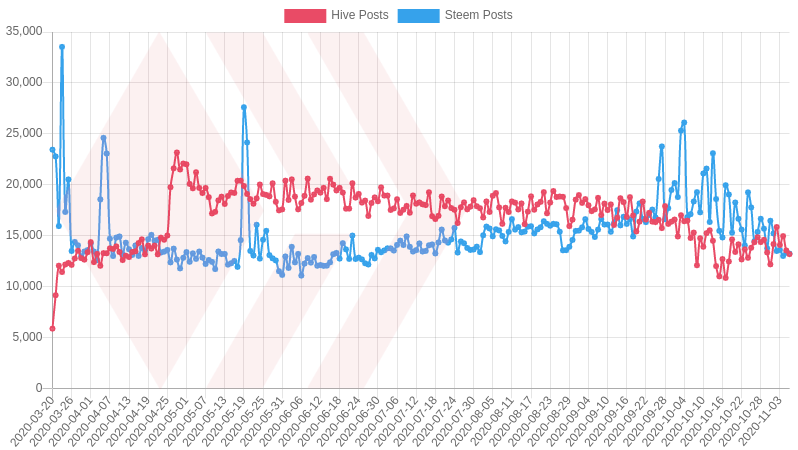 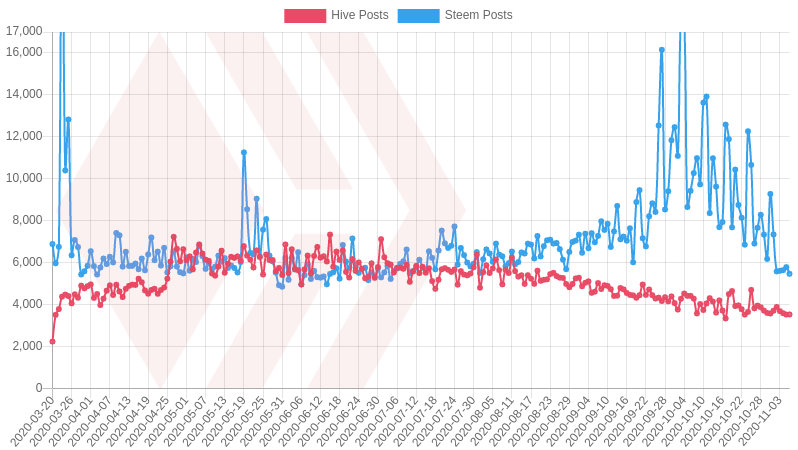 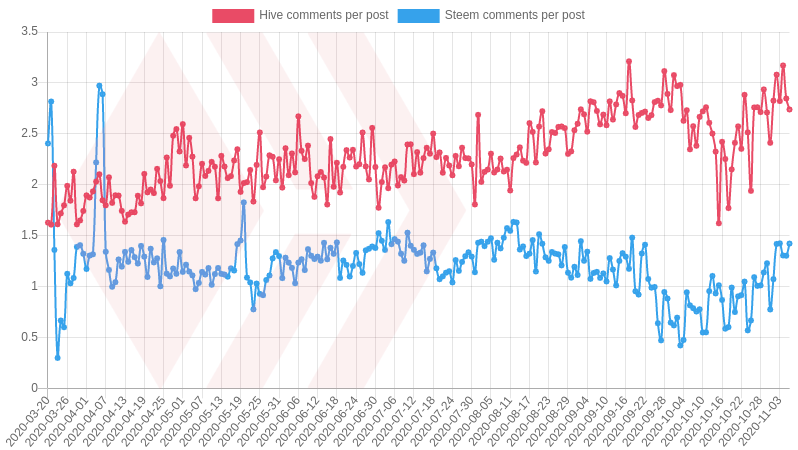 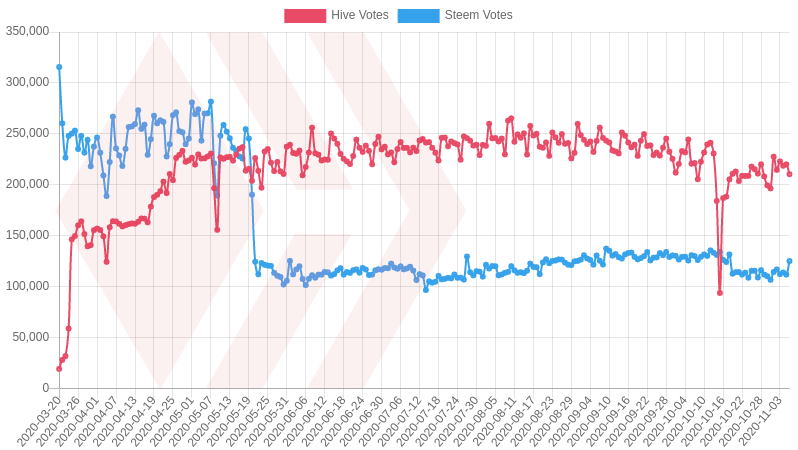 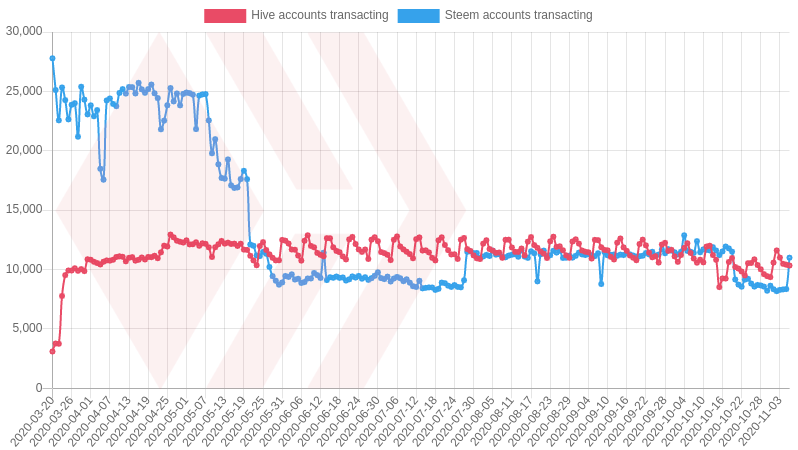 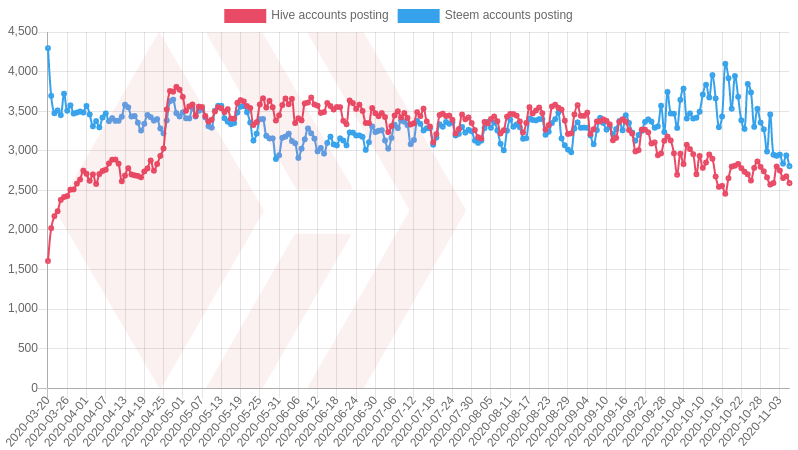 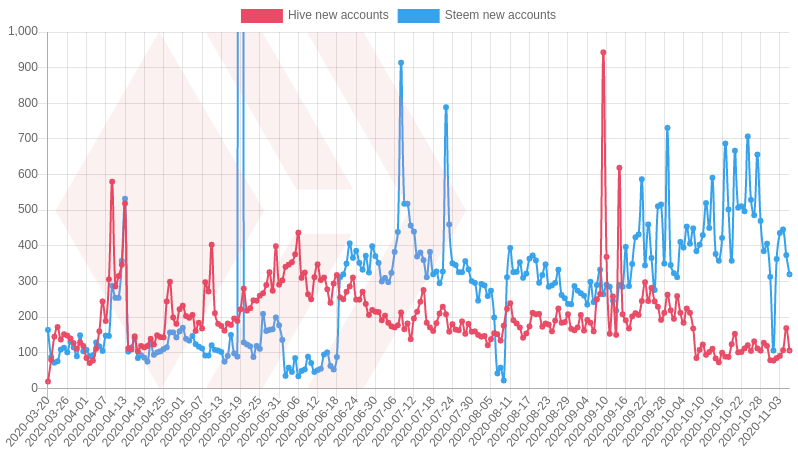 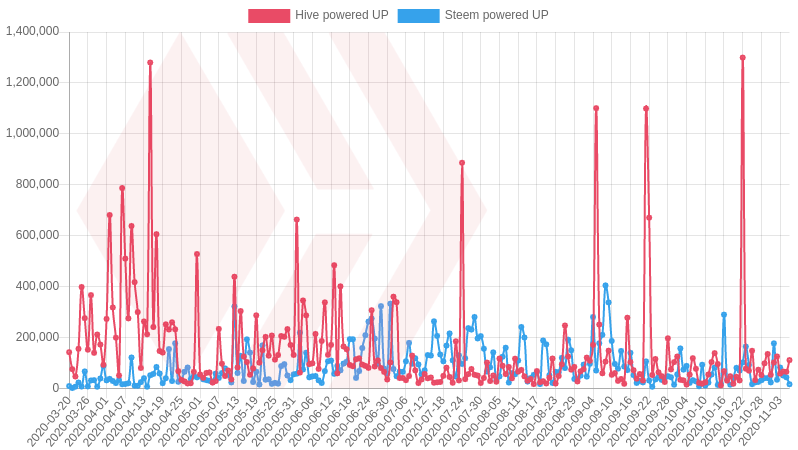 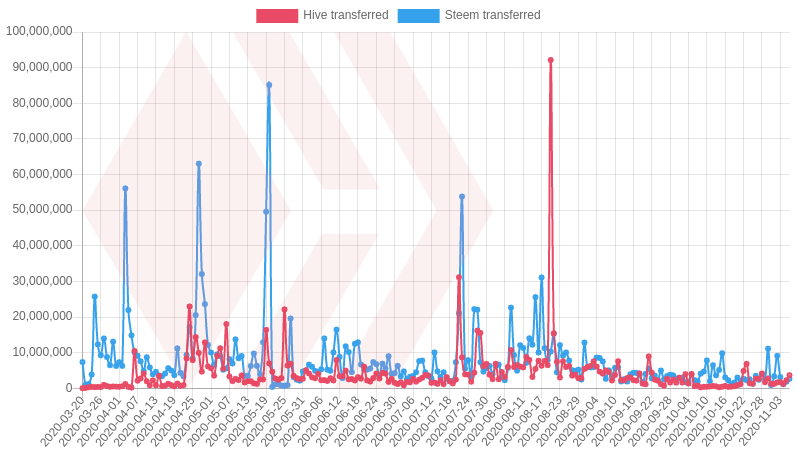 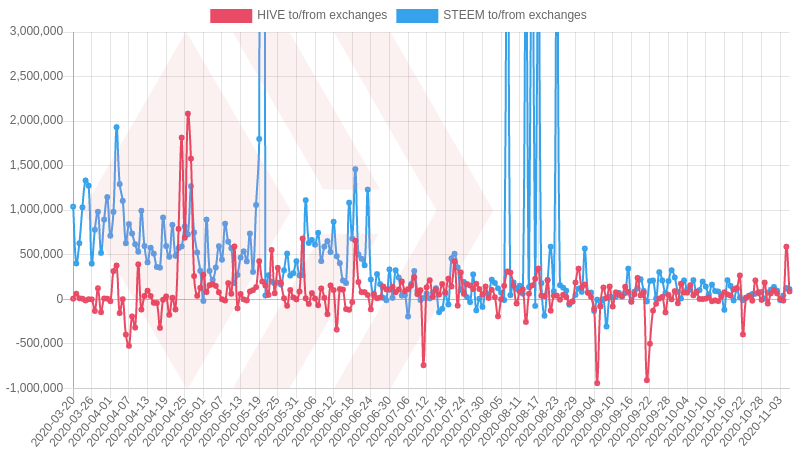 Wonder if you could pull post data based on language?

How many non Koreans still posts to Steemit?
How many Latino posters contribute to Hive?
What is Blurt becoming too?

Why do Hive charts have that same spike up and down style too.. how the hell can everyone be posting same day then take a break and repeat over and over all on the same days. Looks like fake data.

The spikes repeat every 7 days. Somehow Hive user prefer some weekdays over others.

PS: I'm surprised they are both still online.

PPS: I guess I need to change my SteemIt password before tying out Blurt.

Why the hell did I get 4 notifications for this one comment. The Hive chain spiked your drink man!

Those spikes repeating is just not organic. Everyone is in different time zones and doing their own thing likely living real world lives too but somehow they're all posting in sync?

Why wouldn't the three chains stay online?
Hive didn't take the life out of steemit and blurt was a portion of community exiting steemit just like Hive. Why didn't Hive blow up in activity and strengthen its base to drive token price is the question.

The answer: because it's just repeating the same thing. Blurt is even attempting to market itself. It even has a catchy brand. Whether any of the three will ever recover is the unknown.

It could be known if development was on the move. Because social platforms are actually very easy to grow. The mainstream giants have the formula already figured. Blockchain however is its own barrier. The system can't do much of what is standard on the mains.

It's a slow grind.. but too slow and then spikes might start looking like big troughs. Lots of people seem to be jumping ship scared that BTC is the love boat and they're all missing out on festivities! I was wondering why https://deals.weku.io/ and https://dream-real.com/ are still online. They are much older SteemIt clones who never gained much traction. There was another one. Something with whale.

We give life 2 systems.
Humans are the nuclei.

That's why I believe even if Hive never becomes what many dream it will, it will still be online. Which is the double edge sword. Because sharks can continue to sell hope.. and people committed continue to donate their time when their efforts would likely be better rewarded elsewhere.

I see that already.

When a platform forces its community to be the workers pushing marketing.. then that's a troubling sign that it's not expanding but actually shrinking and relying on remedies rather than a superior model of growth. Imo, the current system of "social with rewards" is very broken. Missing so much to retain attention. Things move too slow here, lots of talk about what this could be but not much else. steem posts dying, are you actively not counting bots, or did the bots/real people leave?

hmm could be looking better

Congratulations @penguinpablo! You have completed the following achievement on the Hive blockchain and have been rewarded with new badge(s) :