How Much Gaming Can You Handle For $5 USD!? - The Sup Game Box. Old man gaming!

The wife and I sell books on the major Asian shopping channels, Lazada and Shoppee and as such, often get our Internet feeds blasted with ads. One such Ad on Shoppee caught my eye. A little handheld, Gameboy-style device packed with 400 games for the princely sum of 153Baht ($4.89 USD, £3.87 GBP). To be fair, I had a discount as I used my Shoppee coins, but the normal and easy to find price is still only 195 Baht.

Want to buy one of your own? Go here

What could a man do? It would have been rude not to!

The seller of these devices was in China but that's very common in Thailand and although the delivery times can run to 2 weeks, everything we have ever ordered has arrived without hassle from customs and excise and exactly as it has been described. The Payment was transferred directly from the Shoppee-Pay App on my phone and so it came to pass that just 9 days after I ordered it, a little box turned up on the back of a Ninja delivery driver's motorcycle.

I excitedly opened the box and slid out a rather natty black box. It was my Sup Game Box and there was a bonus... 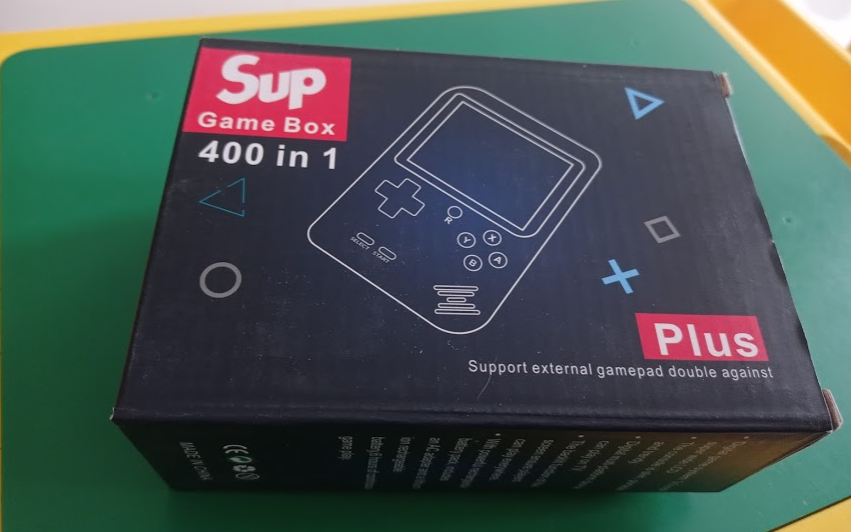 As you can see from the box, Sup had 'borrowed' some design features from a number of other, probably more well-known manufacturers and brands including Nintendo and Sony and the logo is very 'Superdry'! It even had a CE-approved mark on the side of the box, but I'm not sure it really had been approved for use in the EU!
Anyway, no matter. Let's get it open and see how many 'AAA' batteries it needs...

What's in the box? 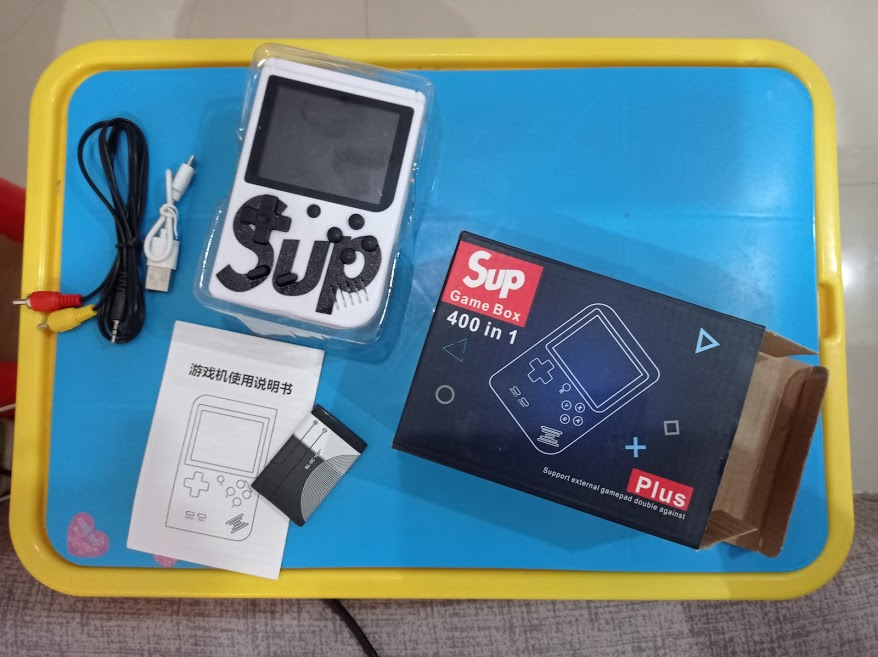 WOW...No AAA batteries? No, because it comes with a little Lithium-ion battery and a charging wire! That's amazing. It also comes with some Chinese instructions and even a video lead to plug the thing into your TV, but as long as it's not very far away! I will have to try this later.

On the front, we have the usual buttons. Reset, both button and joypad style controllers, select and start and the speaker, which it has to be said is rather tinny but pretty loud is on the bottom front corner. A volume control is on the side and the sockets for the charger, AV out and on/off switch sit on the top side.

Let's fire this Bad-boy up and see what games we get... 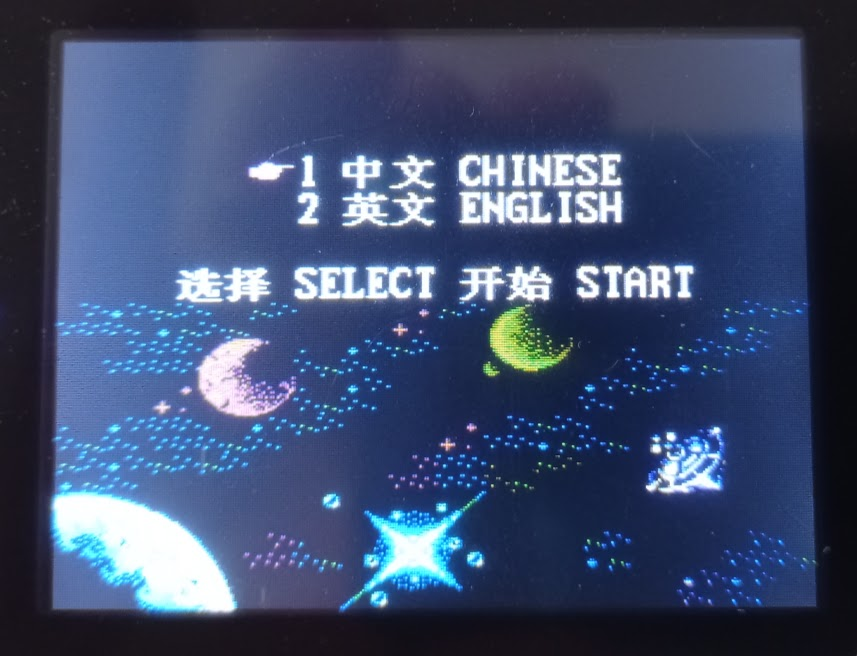 The first thing we get when switching it on is an immediate choice between English and Chinese. I of course chose English, and then the menu of goodies appears! 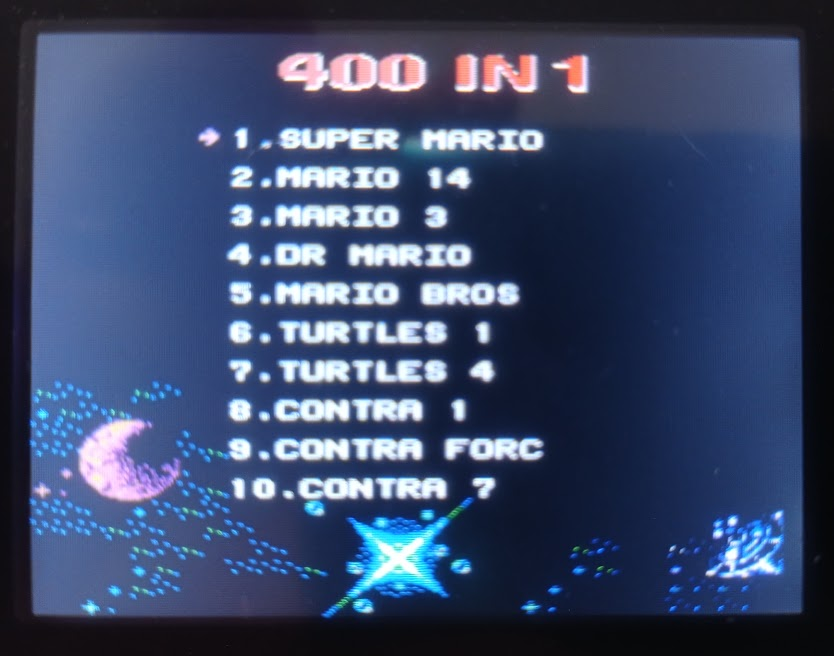 The wife loves super Mario though it falls just out of my time frame and I was never a huge fan of platform games anyway!

The screen is not the greatest. It's a 3inch screen and ever so slightly out of focus, the blacks are not very deep and the colours not very vivid and my phone struggled badly trying to sharpen it up so apologies for the bad photos, but the menu appears and then it's time to start scrolling..... 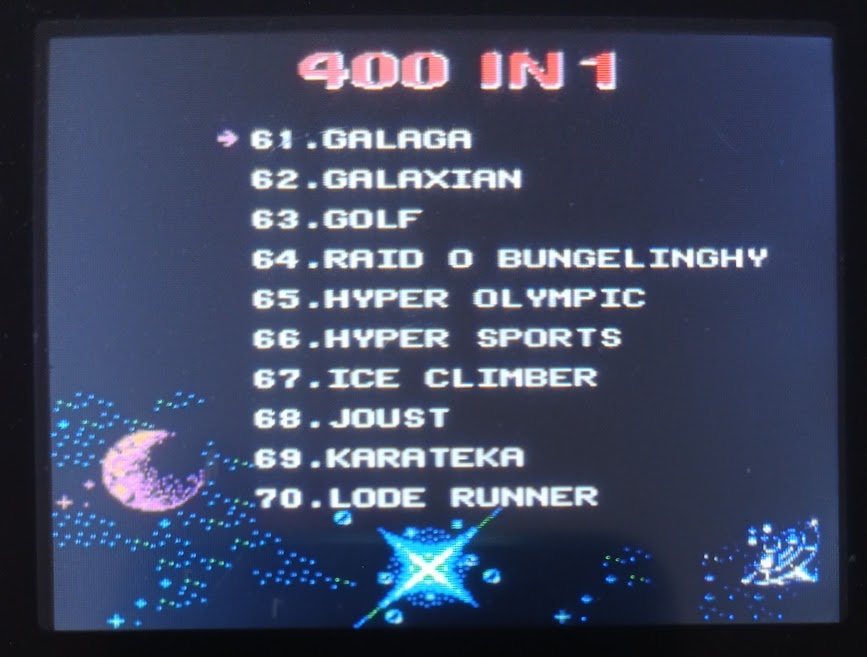 Now we're talking! all my favourites on the same page, Galaxian, Galaga and Hyper Sports .

I don't need to go much further, so let's take a look! 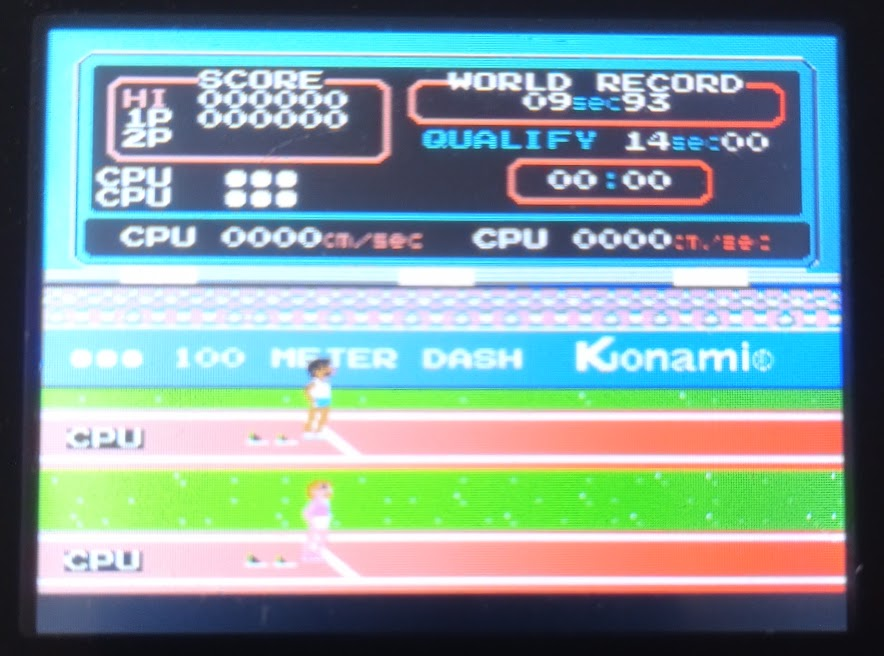 Now the colours aren't as bad in real life as they are on my photos, and the game is absolutely as I remembered it. It played perfectly without lag and I spent quite a while until I started worrying about trashing my buttons! If you've ever played this, you will know what I mean!

So it was time to have a look at Galaxian, possibly the game I was most successful at back in the 80's arcades. I could make my 10p coin last for ages as I motored through the levels! 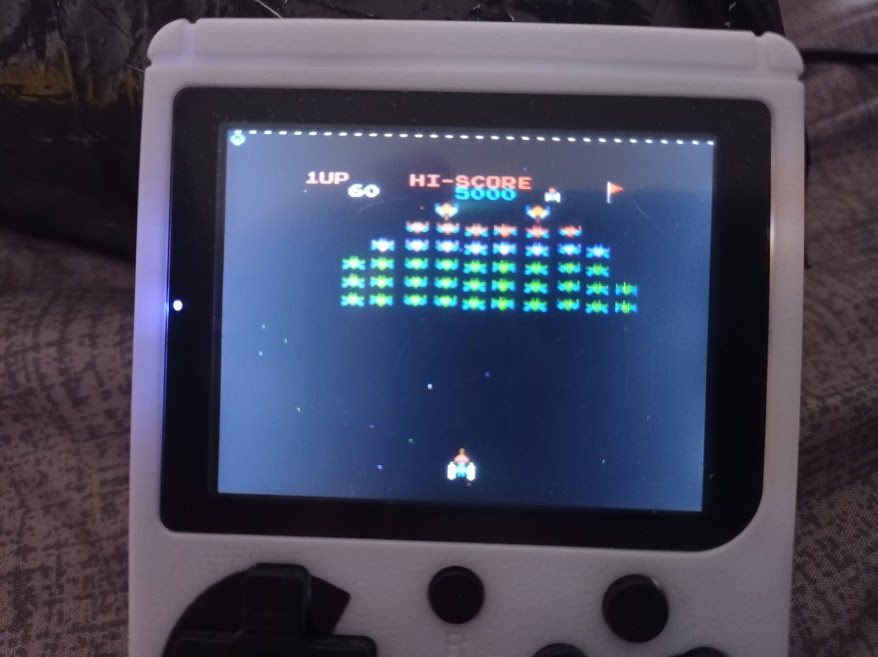 Again, it's absolutely spot on! Sounds, looks and plays exactly as it did on the machine, back in the day!
I was never a huge fan of Pacman but when I came across it, I had to have a look and again. Same thing. Perfect! 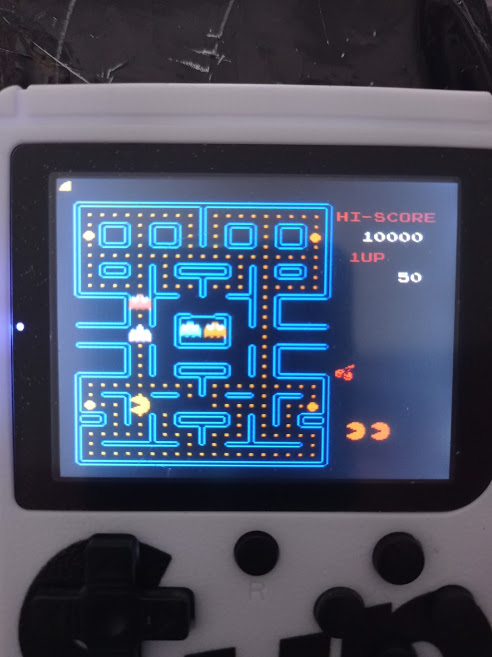 That's also a slightly better photograph and better represents the thing. Its not bad and it is very playable... up until a point and I'll come to that later! 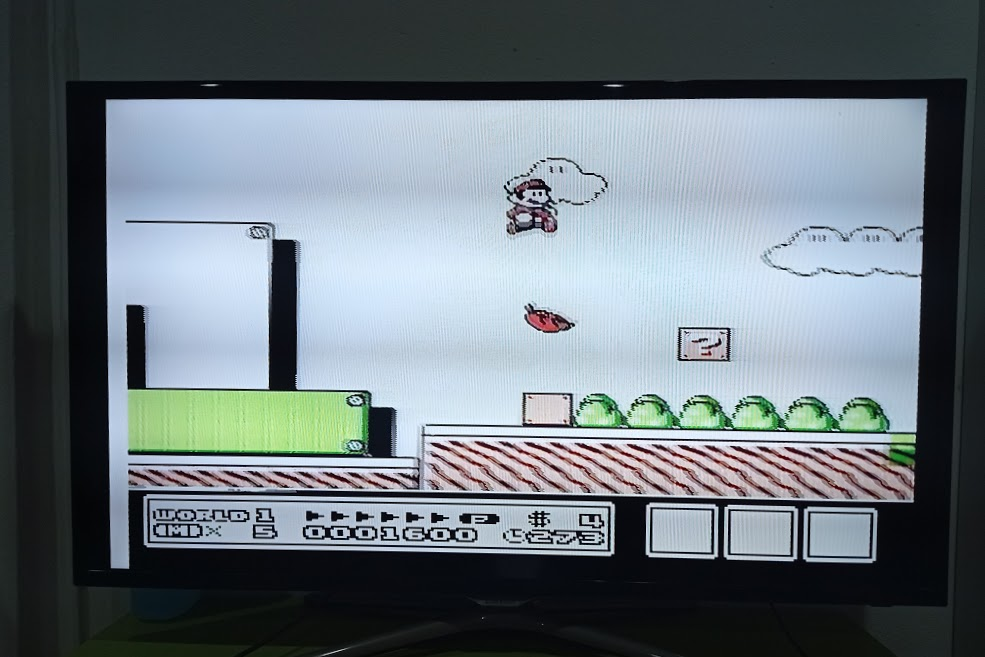 and my Hyper Sports... 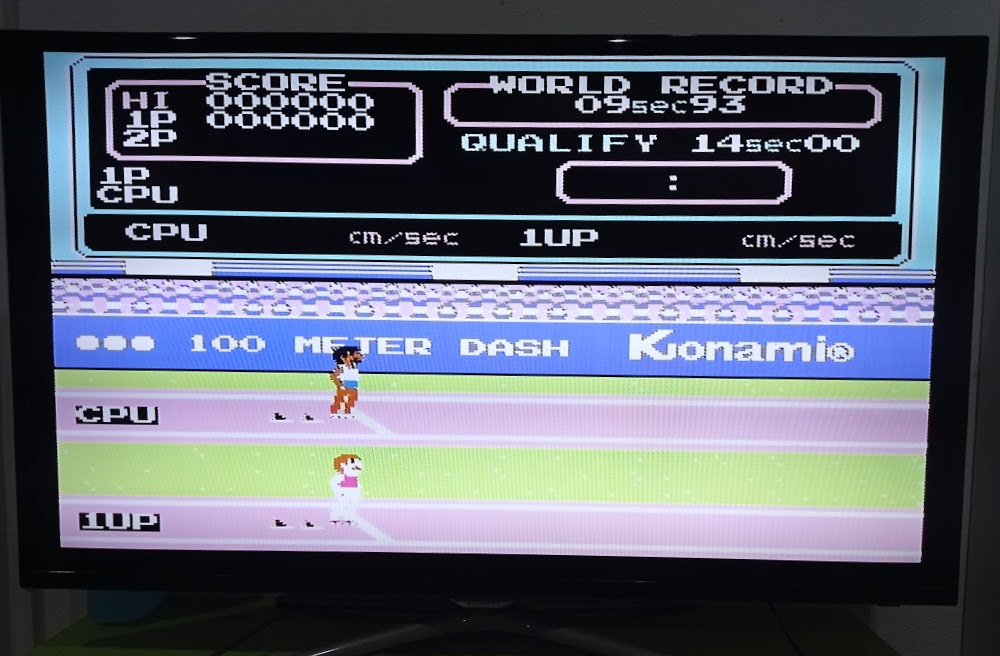 Let's keep scrolling and see what other games there are...

Hang on a second! I started by trying to scroll back from 400 down and what I found is the cheeky gits and simply repeated the games, sometimes up to 4 times over! 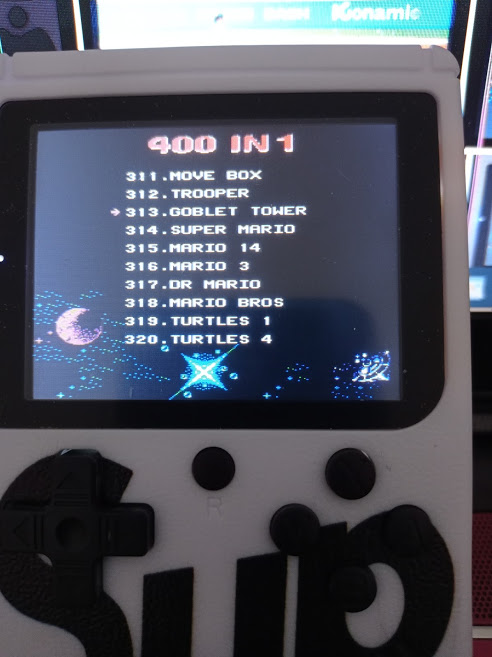 LOL...Mario was at No.1 when I first switched the thing on, and also appears down the list at No.314! As for some of the other games on here, has anyone heard or played any of these? 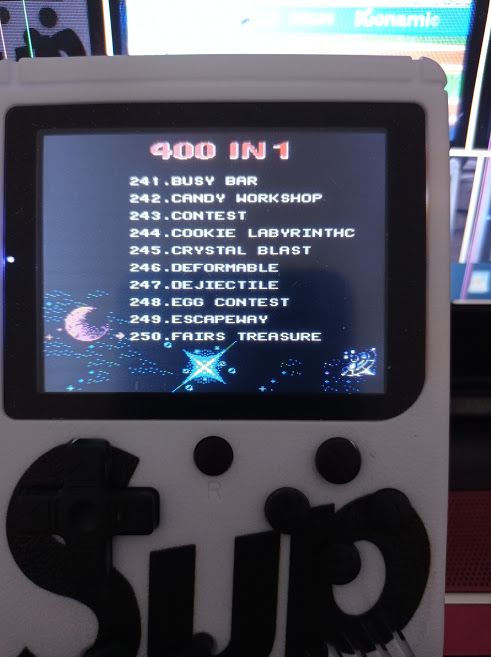 So let's take a look at some of these games I'd never seen before starting with Dejiectile.....

And it was at this point I discovered another problem...the battery ran out after just 35 minutes of play.

This is why they were selling extra batteries on the site when I bought it. Should have bought a few as they were only 40Baht ($1.30 USD, £0.98 GBP)! So if you do order one, get some extra batteries! It does actually play with no battery if you connect directly into a USB charger, but again, the wires aren't long!

If you're 55, useless at modern games with their multiple button combination moves and super speedy gameplay or perhaps you simply want to reminisce in those noisy, out of this world arcades of wonderment of the '80s or even if you're a lot younger and simply want to play a few retro games and see how it was in the 'old days', this little box of tricks is well worth having.

I wonder which NES emulator they threw into that device, and what hardware is running underneath...

Damn you man...I'm going to have to take the bigger apart tomorrow and find out lol
Would it be an NES emulator? A lot of the games were Konami and even Atari Etc...and how much memory is in that little box, I wonder?
Wait till the wife isn't looking tomorrow and I'll get the screwdrivers out ;-)

It's definitely got an NES emulator, maybe even MAME or a couple others. If it's running Atari games as well as NES games, it's probably RetroArch.

then i'm not the only one who got it! xD I did thanks mate, took me back to my misspent youth lol

Aw, I liked the look of it but that slight out of focus would kill me . That and the cheating of the number of games, cheeky cheeky!!

I can't decide whether the focus is my phone or not, my eyesight is appalling due to glaucoma and diabetes so it could be just me that's not getting a good photo lol

Blame the phone, thats what I always do!! :OD

Hey, still good for $5! If I had the chance to buy one of these on a whim I would probably do it. Even if the colors are a little washed out, and even if it only really has 100 games, that is still a pretty good deal. Lots of classics

Congratulations @nathen007! You have completed the following achievement on the Hive blockchain and have been rewarded with new badge(s) :