Walt Disney World Quest Magical Tour for the Nintendo Game Boy Color went against the grain, somewhat. Most racing games that were ported to the color portable took the overhead route. A few would attempt the third person behind the character view. Rarely, as in only this one time I can point to an example I remember, they would take the side scrolling view. If you are a fan of autoscrolling Super Mario Bros 3 levels set to a speed of about 7 then you are in luck. 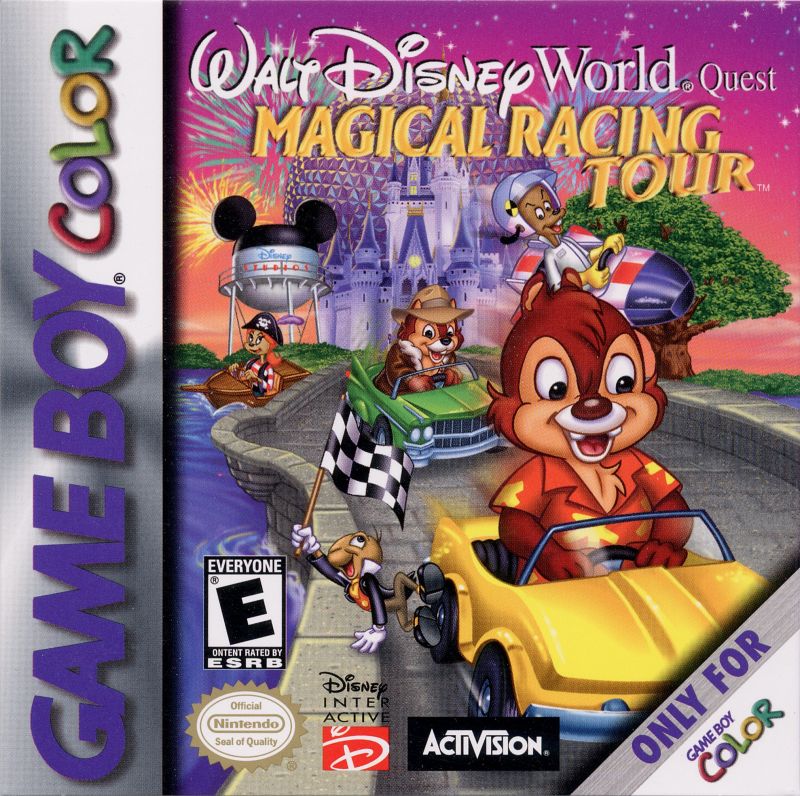 Walt Disney World Quest Magical Racing Tour on the Game Boy did what most ports did. The console versions were handled by one company while the portable version was handled by someone else. Here it is Prolific Publishing that took on the challenge of bringing this game to portable fans.

Unfortunately, due to hardware or not, the graphics once you start racing are hard to connect to Disney. Chip, of Chip ‘n Dale, looks nothing like his character select screen, let alone the cartoons and comics. I mean, he does have his brown hat, so I guess there is that.

It is a sign of the times, anything ported to the 8-Bit Game Boy line is bound to be drastically different. Minimalist games such as puzzle games like Tetris survive admirably but action-based games often fail horribly.

The 8-bit Nintendo Game Boy line just was not up to snuff to recreate detailed visuals. There are some games that defy this logic, but they are few and far between. This action racing game is unfortunately a victim in the visuals department.

Maybe another meg or two of memory could have helped? Different developer?

Walt Disney World Quest Magical Racing Tour is a licensed game. That means it is highly unlikely to see re-release today. If you want to grab a copy physical copies off eBay or Amazon may be your only choices. This game also hit the Sony PlayStation, Sega Dreamcast, and Windows computers.

This article was originally published on the Gaming on Batteries website. Congratulations @triverse!
You raised your level and are now a Dolphin!