How are you all guys hope you will be blessed and fine. In today's post, I will be sharing a rare card from the rewards edition and belongs to the dragon family that i got for the first time and soon i will upgrade this card to level 5. Unofficially, Dhampir Infiltrators are employed by the Gloridax Empire as spies, thieves, and assassins. Because of their half-vampire lineage, they are especially proficient at their work; they have the unnatural reflexes, strength, and agility of a vampire yet are not harmed by sunlight. Read more

Well, here is a new reward card from the dragon family whose circulation supply is very less as compared to other cards because of its awesome double strike ability that you can get from this card at level 1 while if you can make it level 5 or max then you will get some cool benefit from this card as i have seen many opponents have upgraded this card to level 5 with cripple ability and i just checked the market to buy this card or rent this card for my dragon quest on daily basis but it was not available in rental market because of less circulation supply so i will try to buy this card to make this card at least to level 4 for 2 melee attack that will destroy a 6 life monster if i will use this card in the dragon Daria splinter with double strike and the melee attack will get increased to 3.

It was a tough quest and i was busy performing the duty of a 12-hour shift from morning to night so i did not make many loot chests for today and just made 4 loot chests in one hour after reaching home and finished other tasks and i am feeling lucky today that in four loot chests got one legendary card worth something which is a new card to my collection that i will share in the next post. 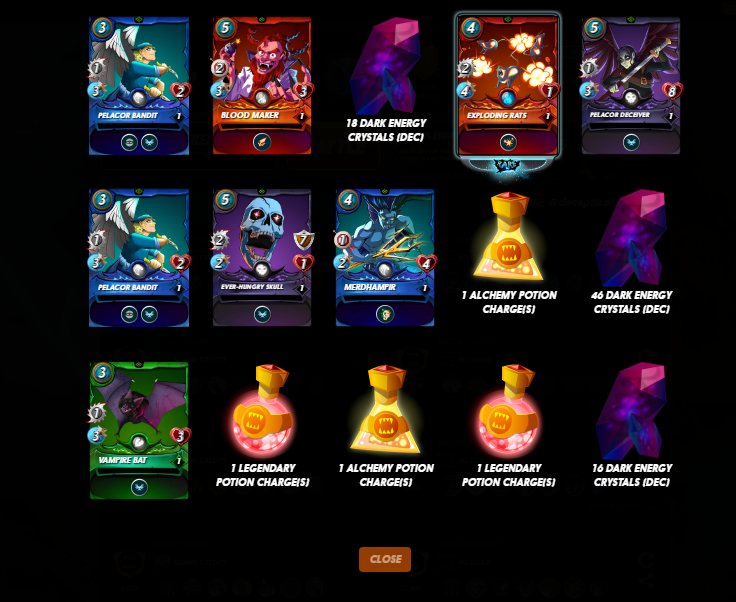 Thank you my friend

For real that new Dhampir is gonna be fire in so many rulesets! Lucky snag!

$0.00
Reply
[-]
poshtoken (78) 3 months ago
The rewards earned on this comment will go directly to the people( @moeenali ) sharing the post on Twitter as long as they are registered with @poshtoken. Sign up at https://hiveposh.com.
$0.00
Reply
[-]
steemmonsters (75) 3 months ago