Frying the Brain on Taxes - The Object Tax

yintercept (59)in Proof of Brain • 3 months ago 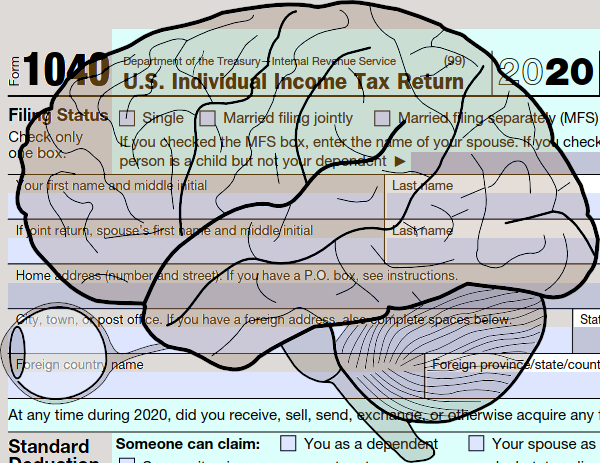 April 15th is tax filing day in the United States. The deadline was extended into May due to COVID19. But I spent the day frying my brain on a 1040 form.

The image is a Brain Sketch from ClipArtLogo.com pasted onto a screen capture of a 1040 Form from irs.gov.

I thought I would take a break from the brain frying for my annual tax reform post.

I decided to place this post on Proof Of Brain site because I wanted to make a point that, while filing taxes fries the human brain, it is extremely important that the voters in a Democracy are involved in the tax collection process.

When the voters feel that they can get free services by taxing other people, then they will vote for politicians who promise irresponsible spending.

Politicians are able to sell the people on debt spending because the people get the benefit now, while the cost will be born by our nation's children.

Congress engages in debt spending because it does not involve thinking.

Though I hate frying my brain on tax forms. I believe that the best way to encourage responsible spending is to design a tax system that involves the human brain. When people think that they can get free stuff for no cost, then they will vote for bad government. When people see that the people must ultimately bear the cost of spending they will vote for responsible governance.

The current income tax system was by Milton Friedman in the 1960s. Friedman realized that people are reluctant to pay taxes. To maximize taxes, he needed to find a way to pit economic interests against each other.

In the payroll income tax system, employers are required to withhold taxes from employees. Employees file an annual return to get a small amount of the taxes back.

Employers know that if they cheat on the taxes (pay too little) that it would adversely affect the employees. The system does a good job of encouraging people in an employer/employer relation to pay taxes.

The major problem I see with this system is that it makes employers the primary tax collector for the nation. This reduces the ability of employers to compete with companies abroad.

Employers in the United States are forced to send truck loads of money to the US Government for the privilege of hiring an American Employer.

A second problem with the income tax is that a large number of Americans seem to think that their tax refund is something that came from the government.

Anyone looking at Congress can clearly see that the income tax system is not encouraging responsible spending.

To improve our system of governance, we need a tax system that helps form the connection between government spending and taxation.

Our tax system was designed before the proliferation of computers.

Today, most spending flows through a computer in some form or another.

Decades ago, I put forward a plan that I called "The Object Tax."

The Object Tax would collect taxes through a system of computer programs (aka objects) attached to bank accounts.

So, lets say an employee was in a 20% bracket and was to receive a $1,000 check. The employer would deposit the full $1,000 in the tax aware account. The employee would pay $200 in taxes when the employee tries to withdraw the funds.

The tax aware account would help voters form the association between government spending and taxes.

One could attach the tax aware account to financial structures like HIVE. When it is time for me to withdraw my money from HIVE for spending, I would have to draw the money through a tax aware account.

I came up with the idea of the Object Tax way back in the 1990s (when OOPS was kewl). I like to write a blog post about the idea every year.

The idea is one of a thousand brain farts that I had through the years.

I believe that the tax system should engage the human mind. The Object Tax puts one's full paycheck into an account. People pay taxes when they go to spend money. This encourages people think about taxes (and the uncontrolled government spending that leads to high taxation) every time they spend money.

It would be possible to work the Object Tax into Health Care Reform. I have a really fun lecture on how we could easily implement free market health care reform. But that is a different story.

I now need to go back to frying my brain on tax returns. I just wanted to drop a quick post before my brain sizzled away.