Hello all. I made it out this lunchtime for a walk up Corpstorphine Hill, here in Edinburgh. The Hill is actually a forested nature reserve, completed enclosed within the City, and has a lovely old tower at the top. 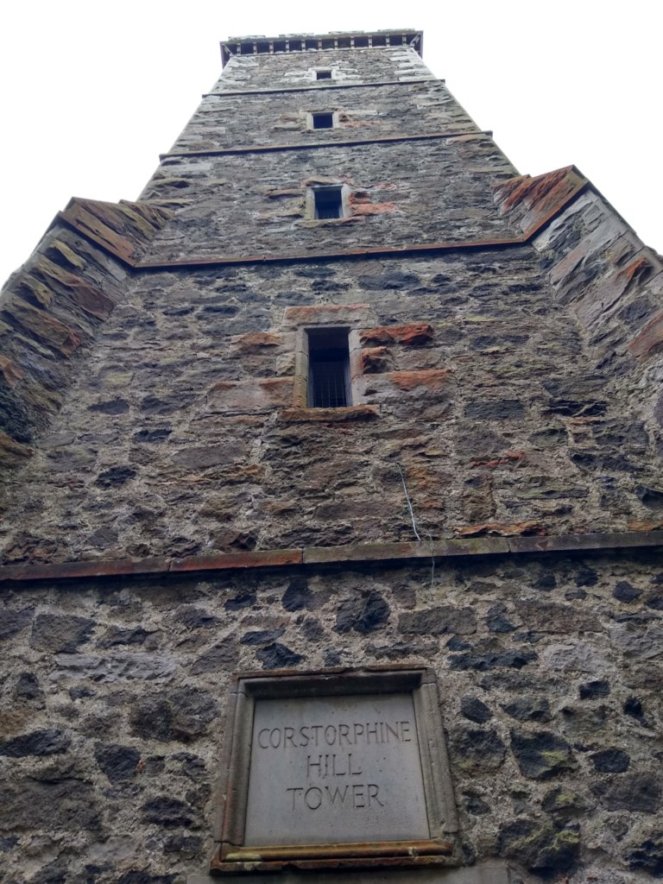 I really like the hill, because it has been nearly completely left to nature - it isnt manicured, and hasnt got fancy paths running through it - is simply a place for nature to do its thing in the city. 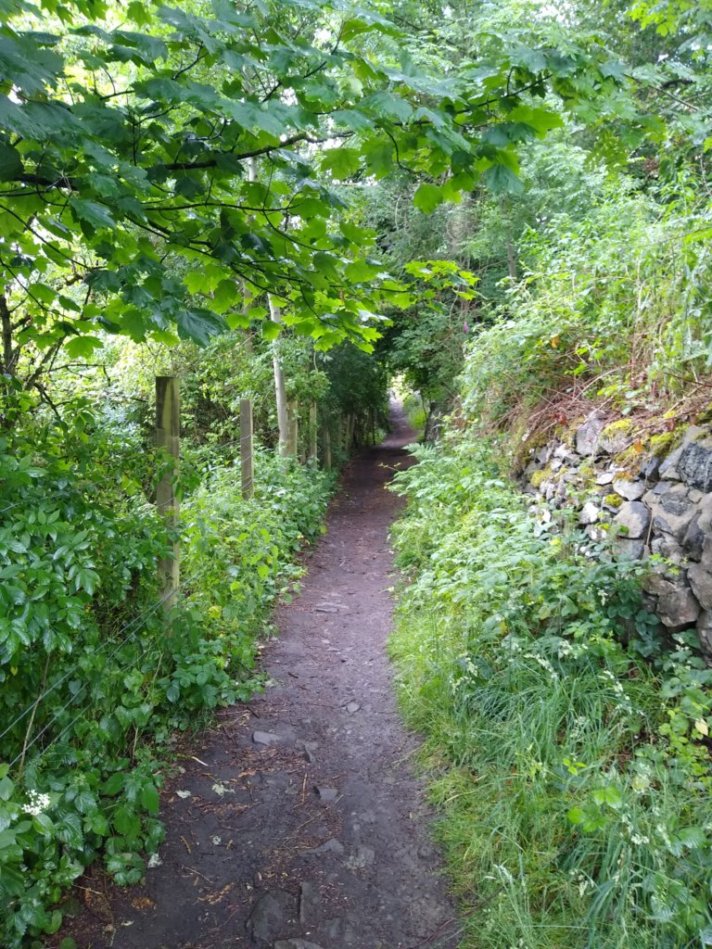 As can be seen by the path above - its pretty rough. 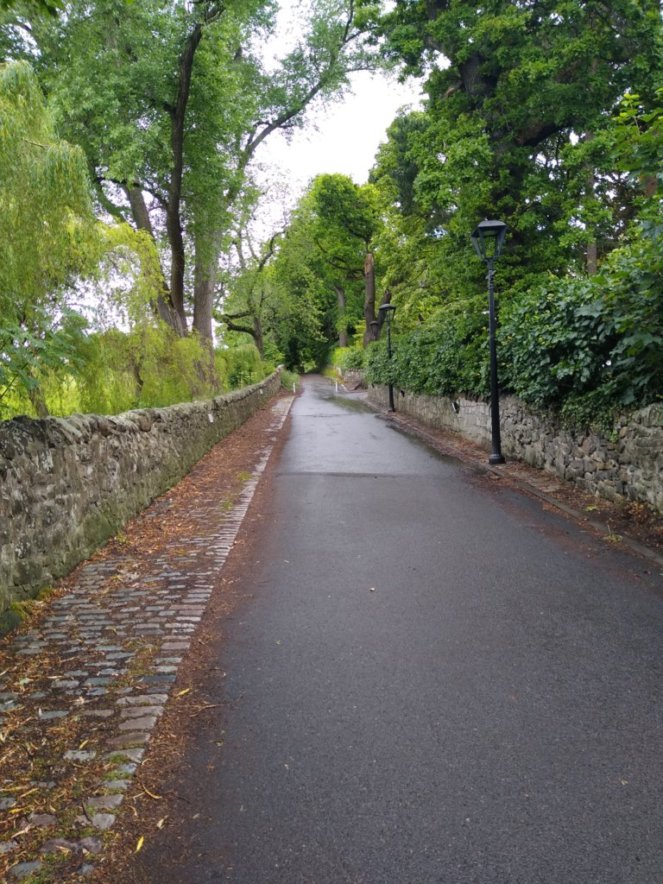 From where I live, its nearly an up hill walk the whole way - so its good for getting some exercise in. I can normally get to the top and back to my house within an hour - but today I only had 50mins, so had to push it a bit. 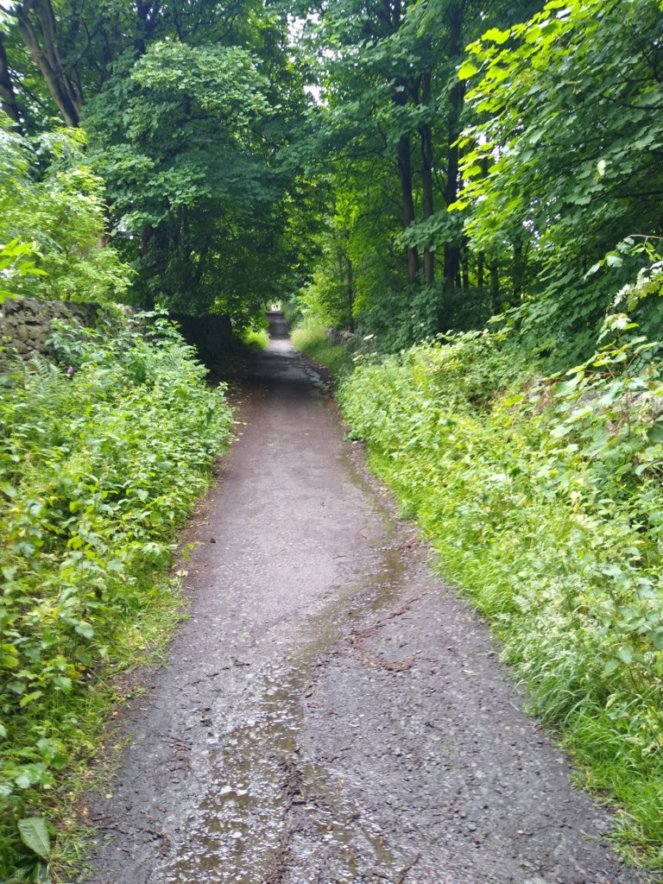 The first part of the path runs right through the middle of Murray Field Golf Club - with holes on either side. 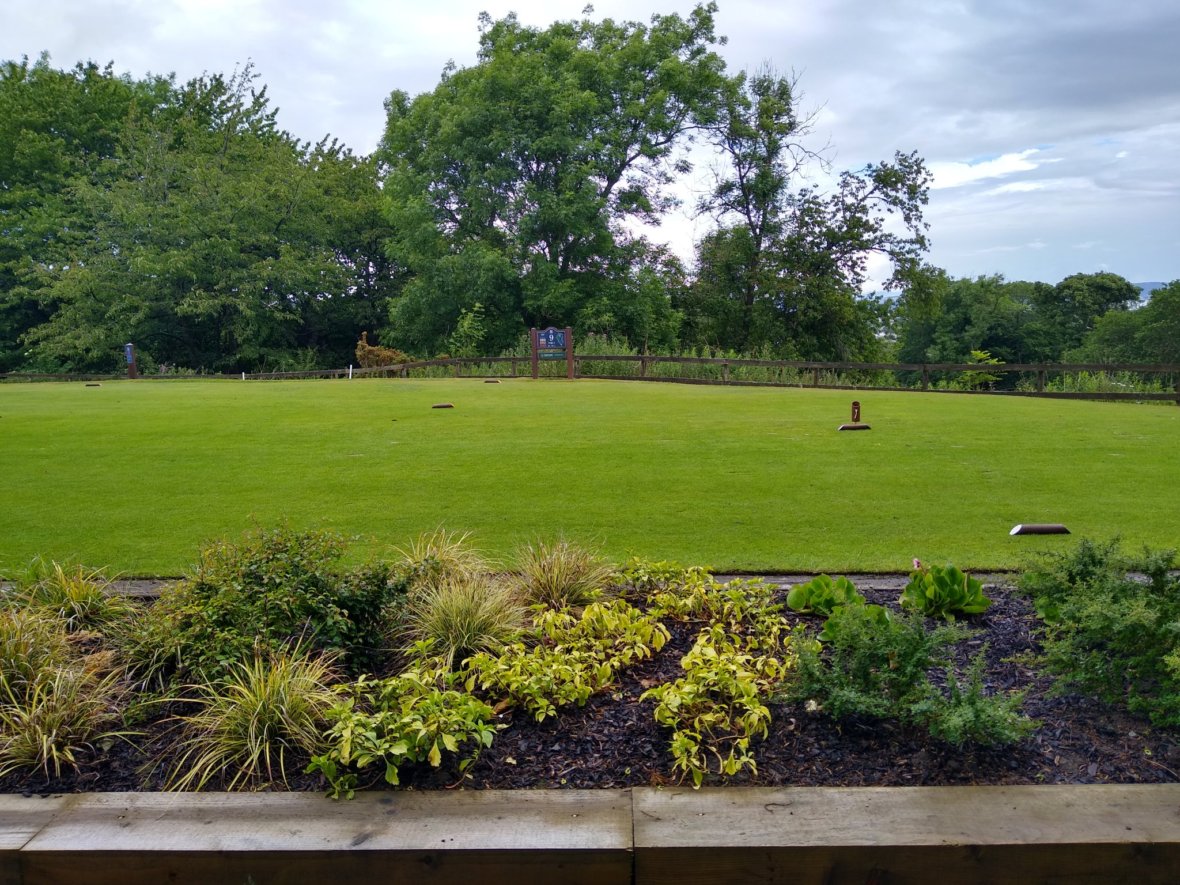 Above is a view of one of the tees. Being the home of golf, you dont have to go too far in Scotland before you hit a golf course ! This one is quite well looked after. 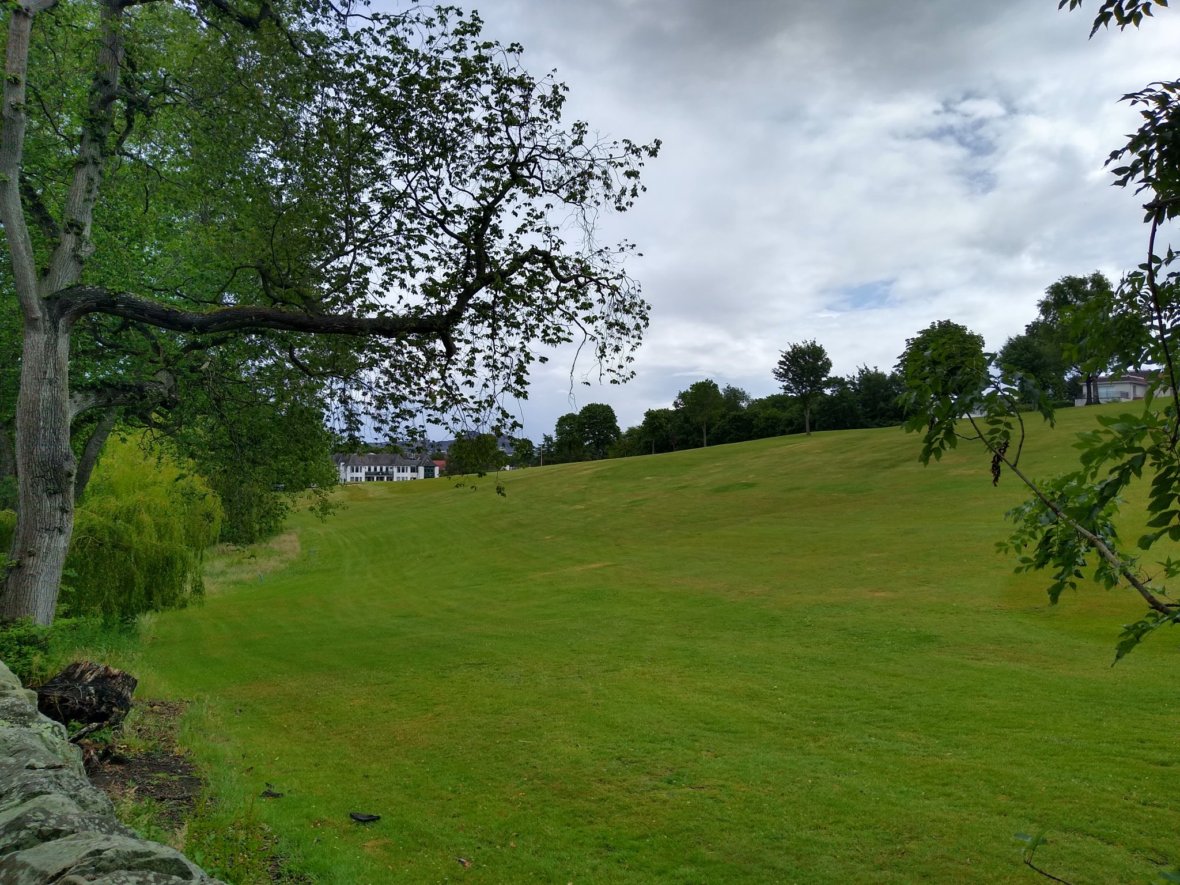 The pic above looks down one of the fairways to the clubhouse, taken from the path up through the middle. 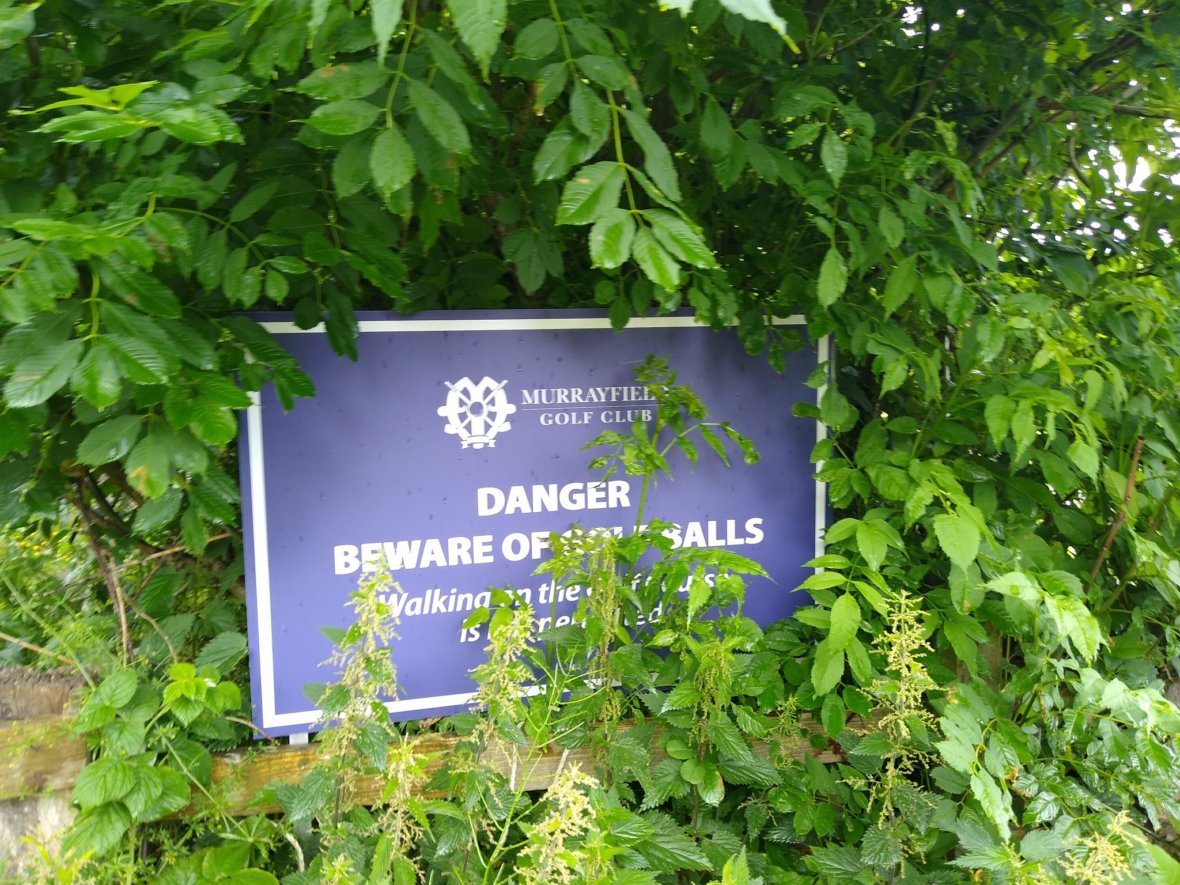 Whenever I go up, there are always people playing and teeing off with drivers - and I'm always wondering when I'll get hit by a golf ball ! 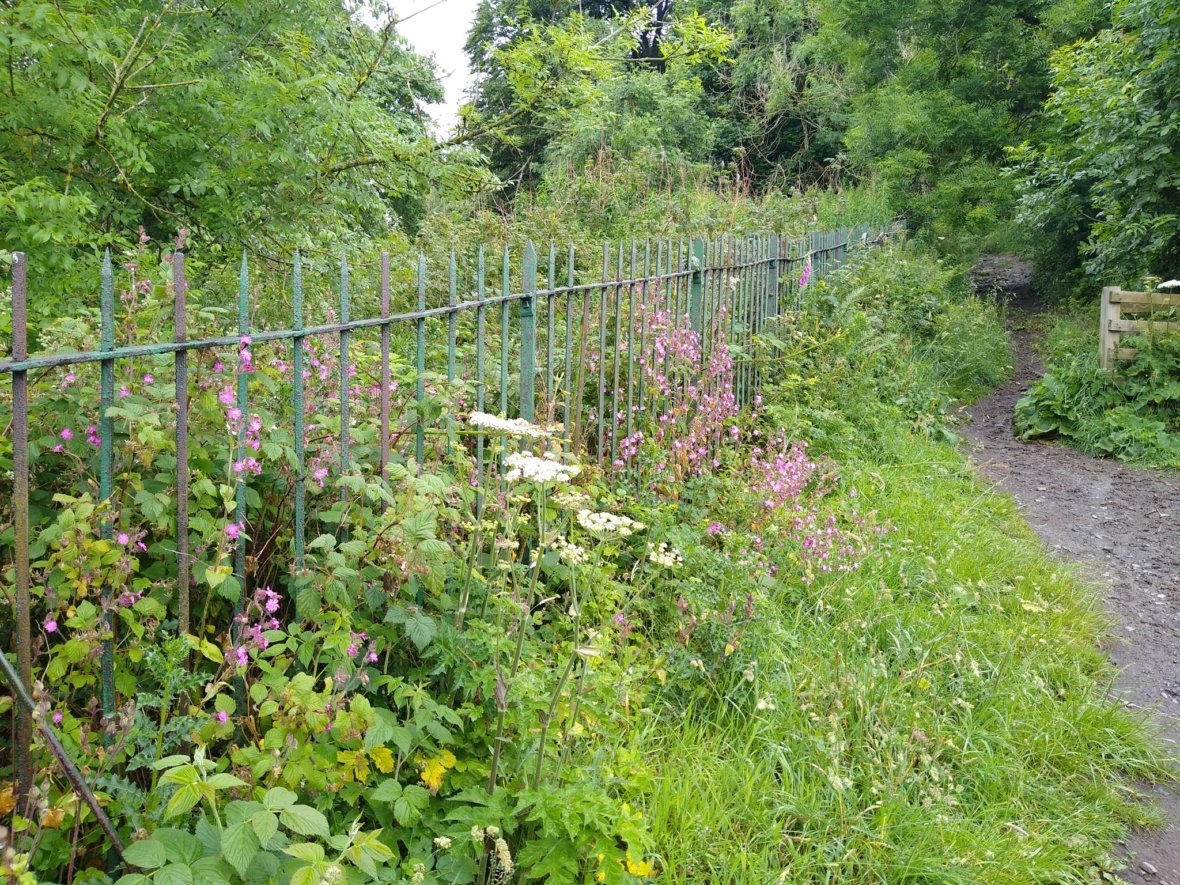 Close to the top of the first part of the climb (above) there is a heap of raspberry bushes - its too early now, but the raspberries are usually good for eating at the end of August - and when climbing the hill, we'll always stop there and have a few. 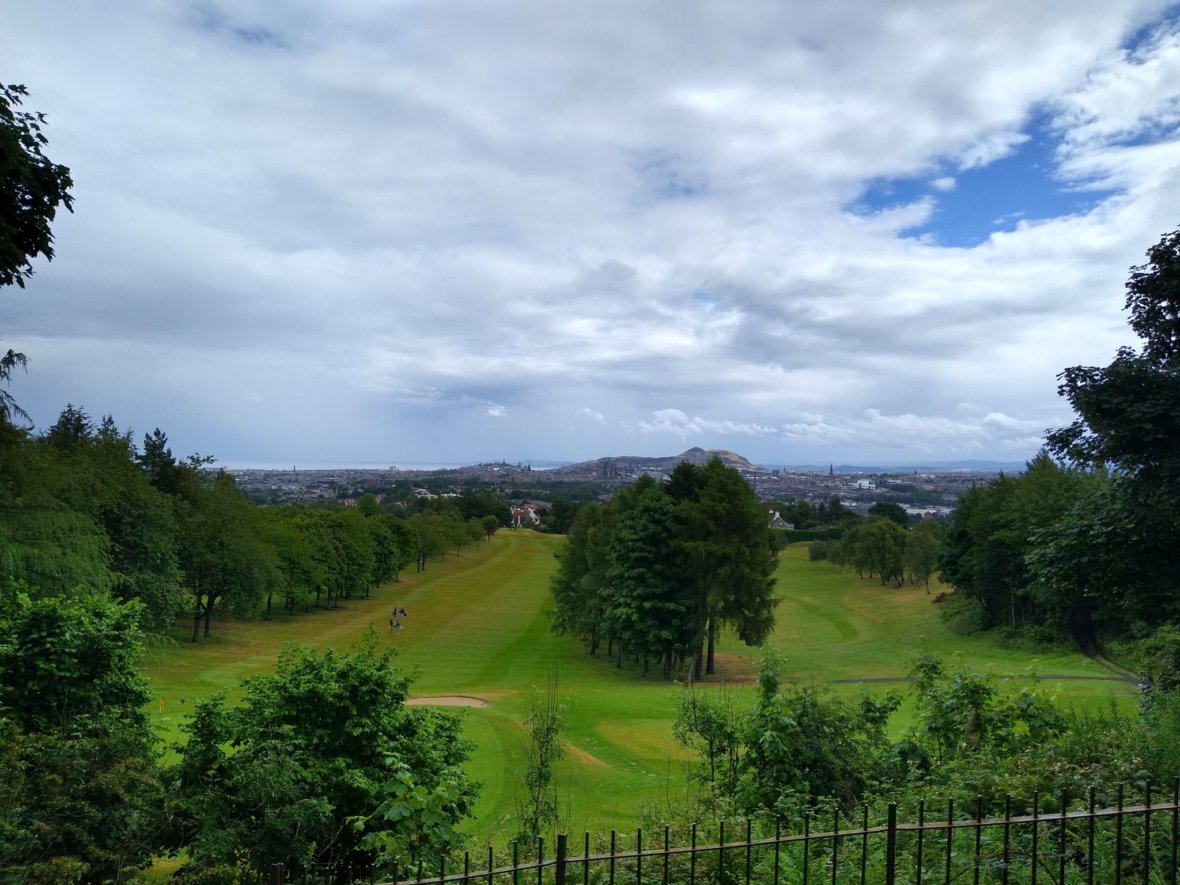 Once you get to the end of the golf course, you get this great view out over it looking down towards the city centre. Its quite a popular stopping point for obvious reasons ! 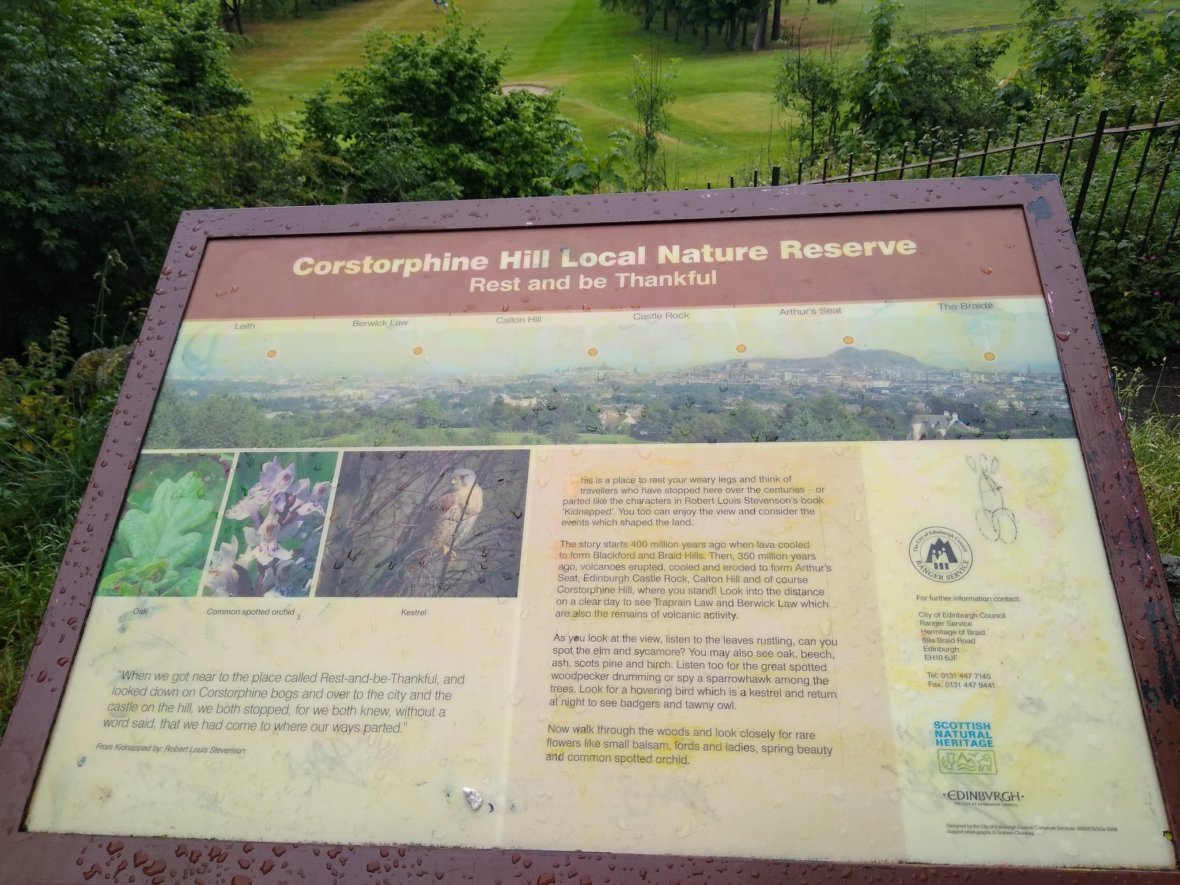 Its called the 'rest and and be thankful' viewpoint - which is a common name used for viewpoints around Scotland. 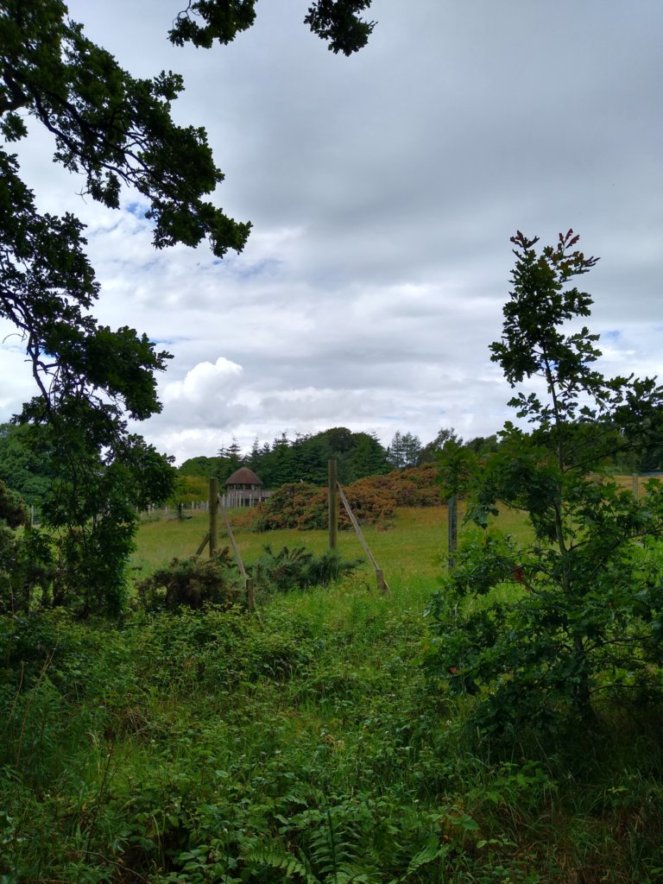 At this point you are starting to get towards the top of the hill, and its really cool, because on the other side of the path at this point is Edinburgh Zoo (above). Sometimes you can see zebras here - but there were none out today :( 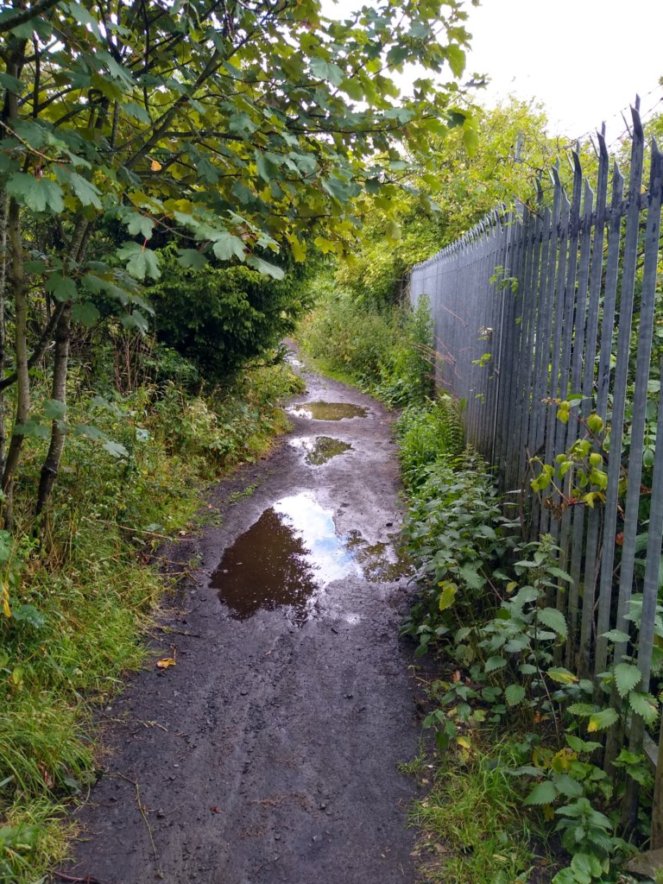 I was quite lucky today as there had been a heavy downpour just before I went, as can be seen by the puddles above, but I was lucky to avoid any rain. On the right (above) you can see the security fence for the zoo - designed to keep animals in, and humans out (in fear of what the animals would do to them !). 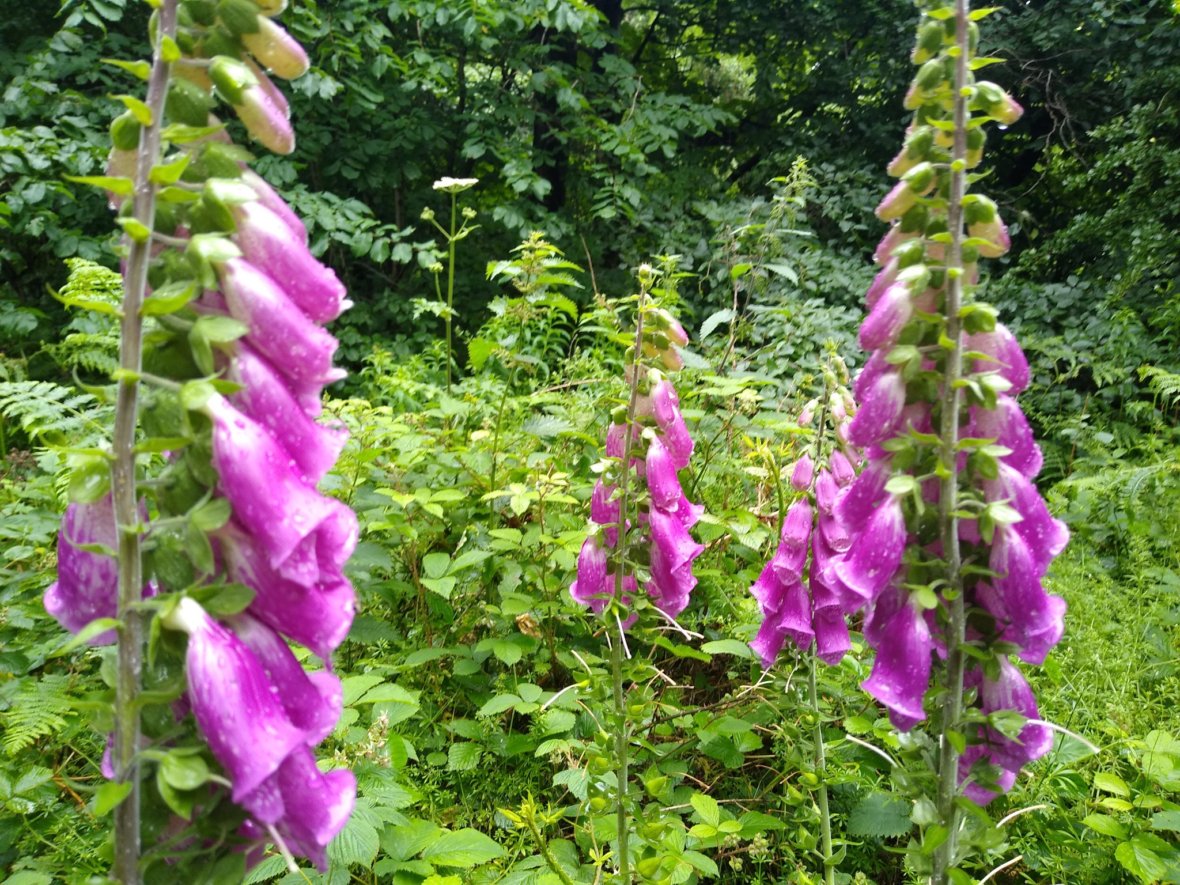 I passed these lovely fox gloves up on the hill - there are quite a lot of wild flowers scattered around in amongst the paths and trees which is lovely to see. 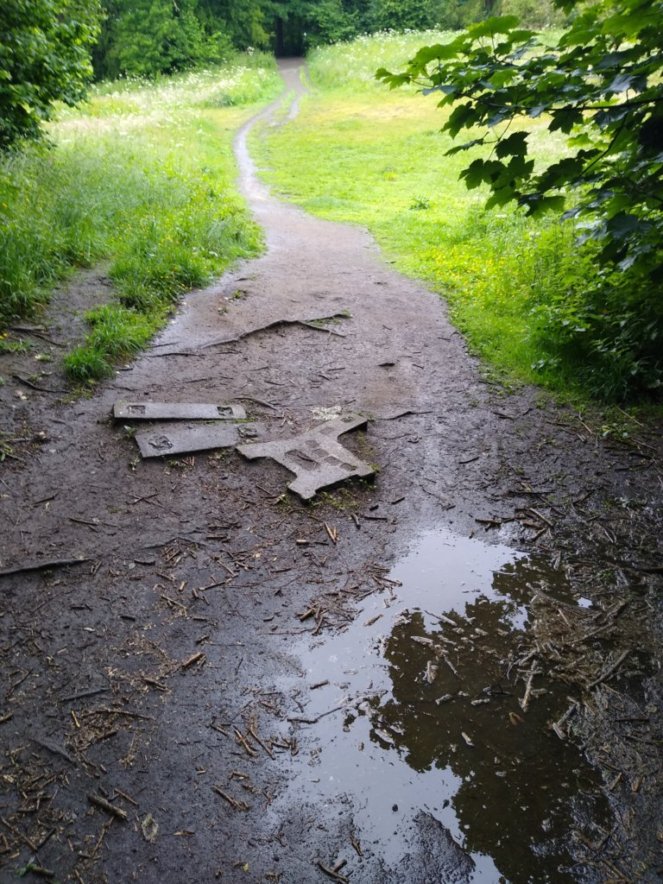 And near the top, this always intrigues me - those shapes in the path are the remains of the concrete parts of an old bench - and are quite big and heavy. It must have gotten smashed up at some point and subsumed into the path ! 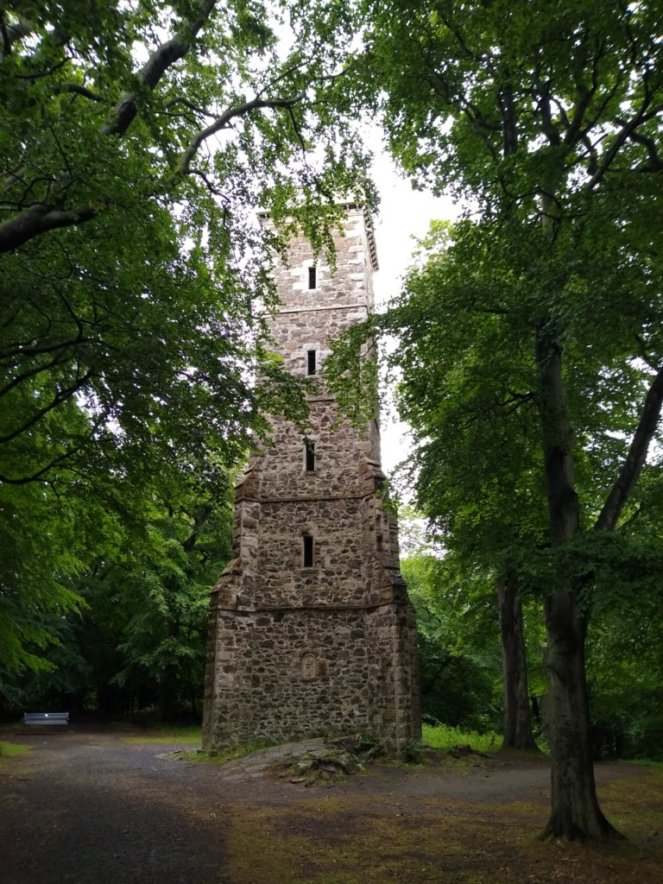 Then right at the top is the tower, which is where I turn around and head back home. Not many people are aware that there is a tower up there. 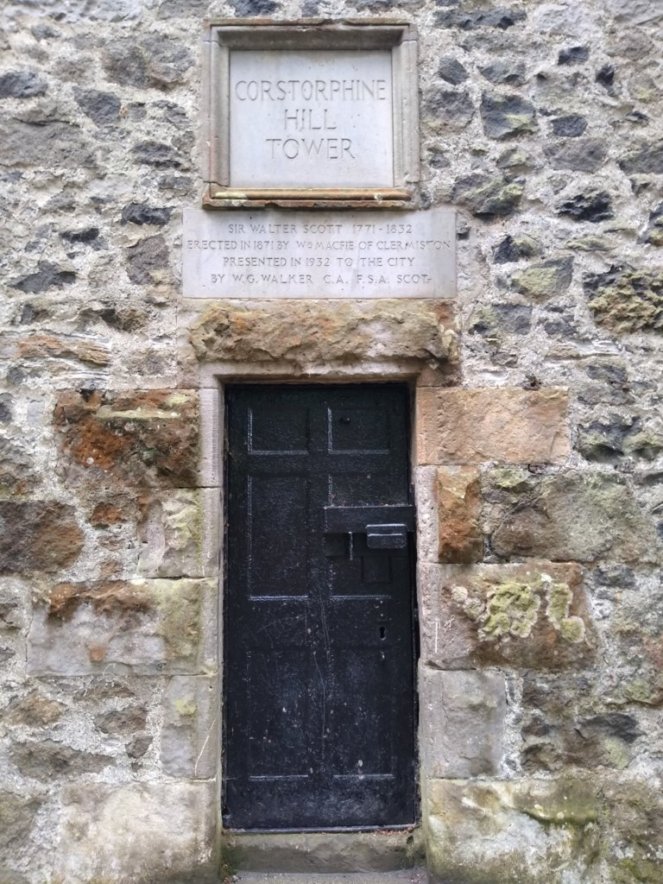 Its a memorial to Sir Walter Scott who was a famous Scottish writer and poet. I love the door, its cast iron, and aint letting any vandals get inside ! I've no idea what its like inside as its always locked. 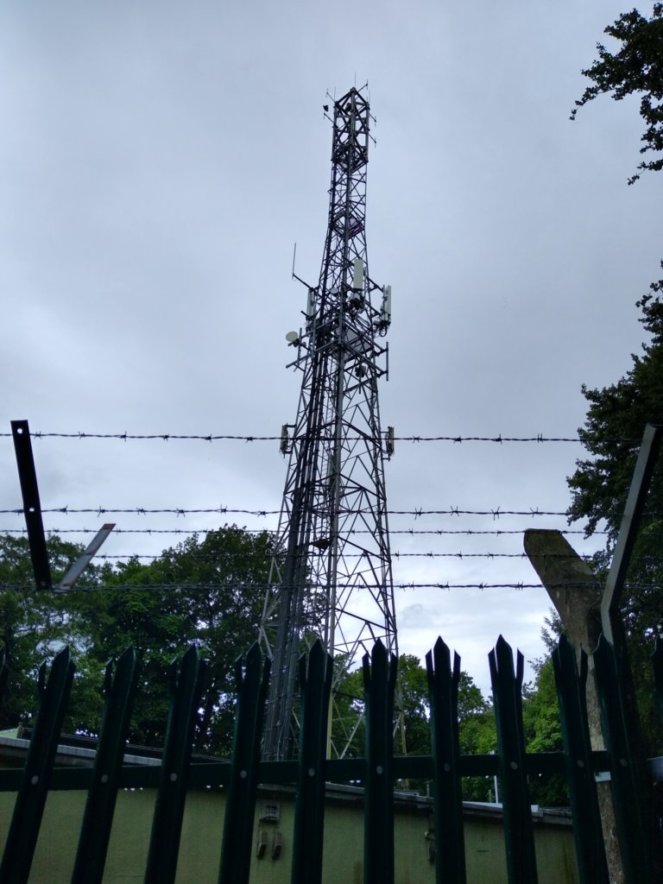 And right beside that tower is a modern coms tower serving parts of the city - people cant live without their mobile phone signal ! 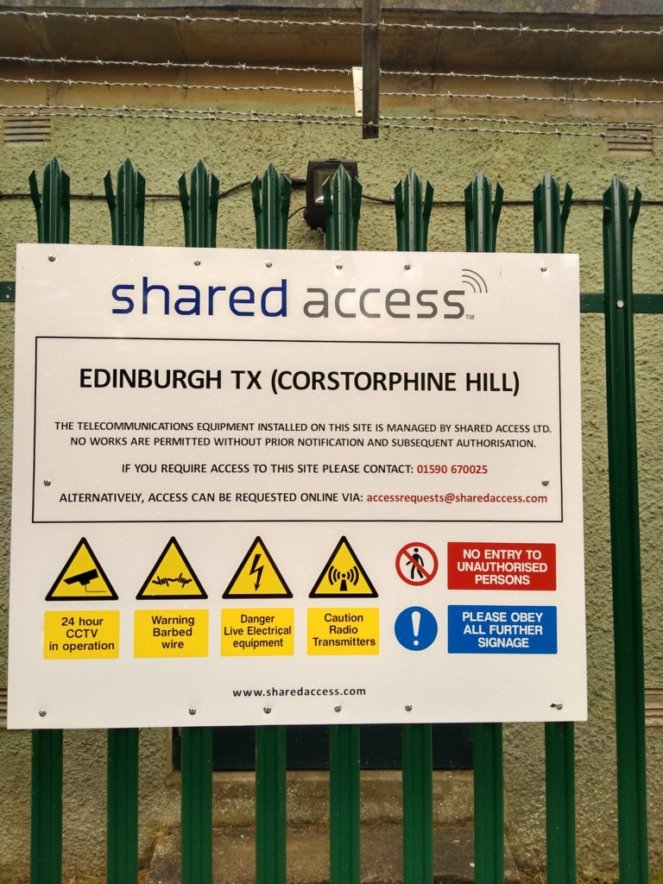 And even up in the nature reserve you cant avoid health & safety - thats the sign on the compound for the coms tower. 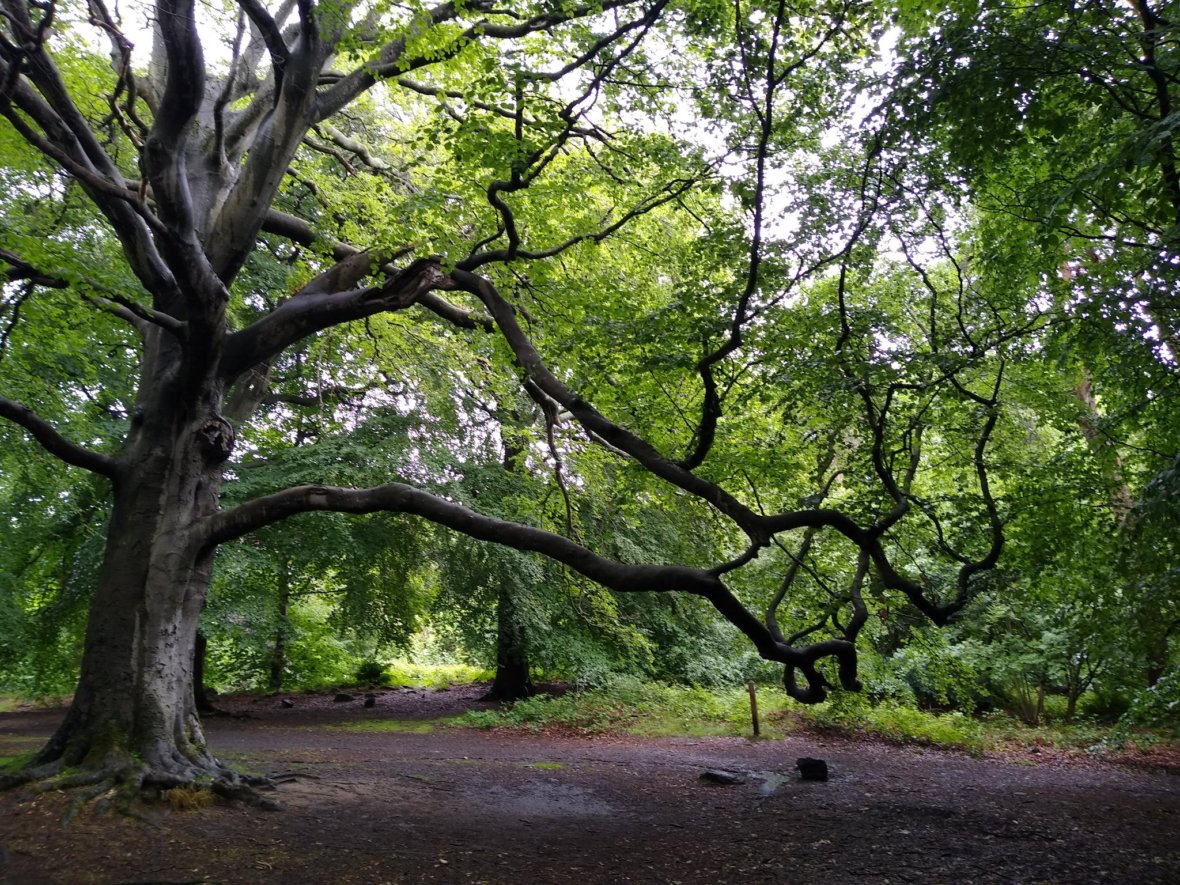 With the hill just being left free to nature, it has varied plants, trees and wildlife. I love the tree above, and the way its branches extend quite far out from it towards the ground. You can see a stone step below it, because many people like to climb up on that branch and bounce up and down on it ! 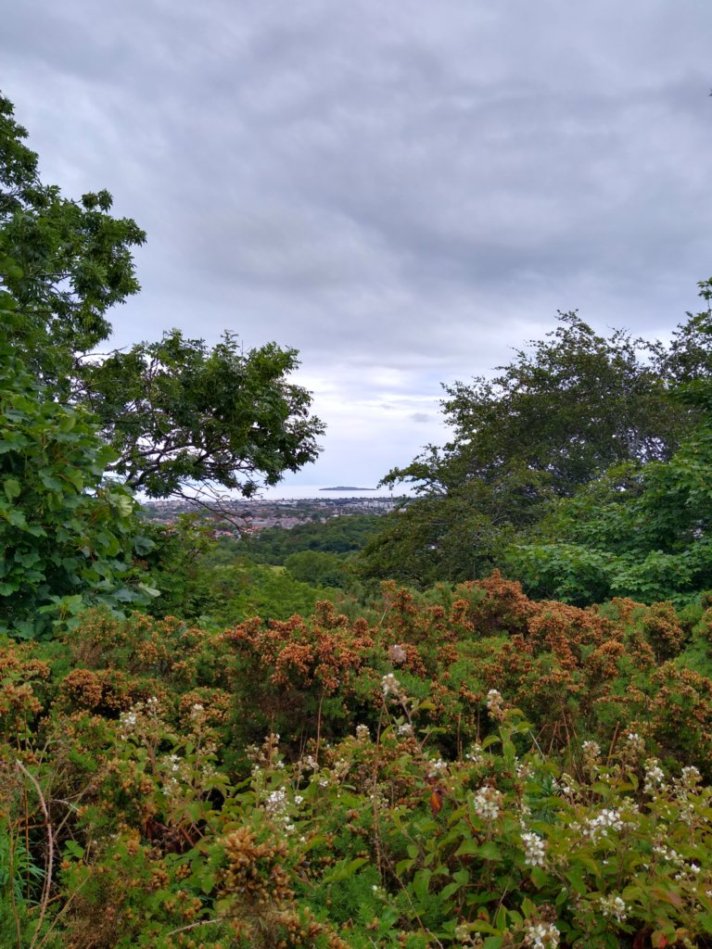 Anyway, I enjoyed my walk today, and made it back in time for my 1pm meeting at work - so all was good !

I hope you are having a great wednesday wherever you are in the world, and I'm looking forward to reading through todays wednesday walk posts ! All the best from Scotland @hoosie 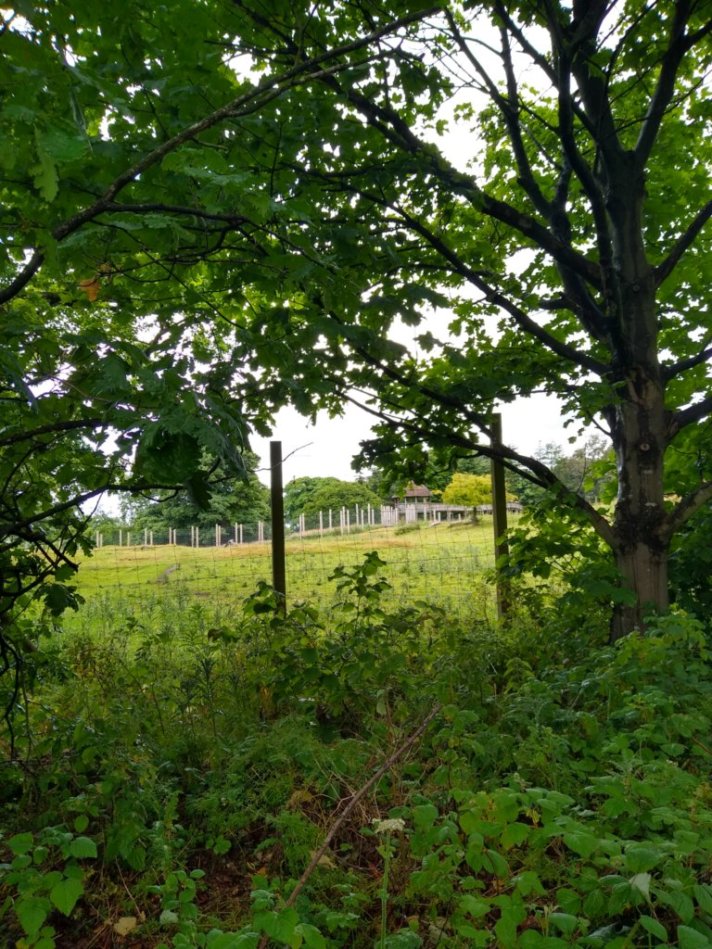 Hi @hoosie,
Thank you for participating in the #teamuk curated tag. We have upvoted your quality content.
For more information visit our discord https://discord.gg/8CVx2Am

such a beautiful area for a walk, the golf course does look so well maintained and WOW that Tower is impressive

Many thanks for the kind comments !

Hi, there! You had a nice walk, and the view from the end of the golf course is so gorgeous.

Aye - it is a lovely walk, and the view point is always worth stopping at !

Hiya, @ybanezkim26 here, just swinging by to let you know that this post made it into our Honorable Mentions in Daily Travel Digest #1602.