It's Spoiler Season - Suit Up!

Spoiler Season is still going strong and #syndicatesunday is not going to be an exception!

Today we have another round of card reveals for you. Once more, the focus will be on a new kind of card that we have not talked much about before: Suits!

As always, we will show you some of the new cards, explain the mechanics and talk about the implications that come with these new reveals. Lets get right to it! 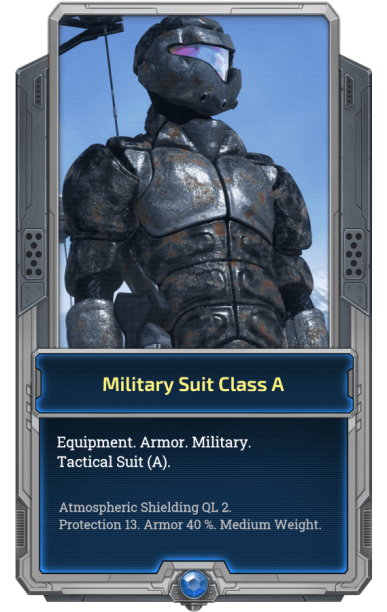 The Military Suit Class A brings everything you would expect from a Tactical Suit. It offers decent protection from enemy gun fire and has some basic Atmospheric Shielding. It is of Medium Weight, so while it will restrict movement a little its wearer will still be able to move around rather freely. So what does Protection and Armor do for you exactly?

When one of your troopers is hit, the damage he would take is calculated first. This damage is reduced by the Armor modifier next. The Protection value is then subtracted from the remaining absolute value. Sounds complicated? Lets see an example!

This formula allows for some interesting designs and decision making. You could focus on either Armor, Protection, or a mix of both depending on what kinds of enemies you are going to face. Against heavy hitters Armor will be king. Against weapons, that fire often but for less damage per hit, Protection will be the way to go. 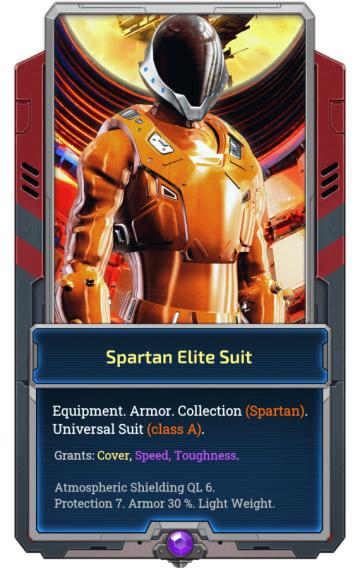 There is more to Suits than just the damage reduction, though. Lets take a look at another design, the Spartan Elite Suit. It offers a lot less Protection and Armor than the Military Suit, but it still has a lot going for itself.

First of all, it has the Collection trait. If you manage to get several members of your crew equipped with the same Collection type, they will all receive a bonus to their efficiency and work better over all. So it might be worth it to bring a slightly worse Suit that you have multiple copies of than to mix and match what ever Suits you can get your hands on.

Another huge boon the Spartan Elite Suit brings to the table are its Grants. If you use this Suit, you get a huge bonus to Cover as well as bonuses to Speed and Toughness. This is going to be another important factor when choosing the right Suits for your crew. Who needs Armor and Protection when he is never hit in the first place? Give this Suit to a crewman that already has a good Cover rating and enemies will have a very hard time taking any shots at him. 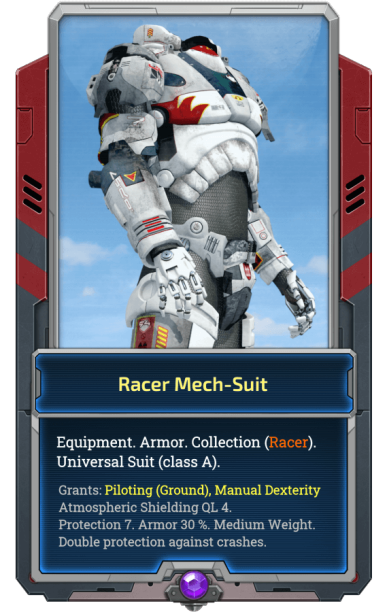 Not all suits are made for combat, though. The Racer Mech-Suit is specially crafted for ground pilots. While it still offers some basic Armor and Protection, it really shines when it is being used by a pilot. It provides huge Grants to Piloting (Ground) and Manual Dexterity, so any pilot equipped with this suit will be able to perform a lot better.

In case your pilot still manages to crash for some reason, the Racer Mech-Suit is still perfectly able to protect him from harm. Both Protection and Armor are doubled against any damage that is caused by a crash. So any such damage will first be reduced by an amazing 60% and then another 14 points will be subtracted from the remaining value.

Also, take a look at the different Atmospheric Shielding ratings we have seen on the different armors. The better the rating the better its wearer is protected from any hazardous environment the planet might present you with. 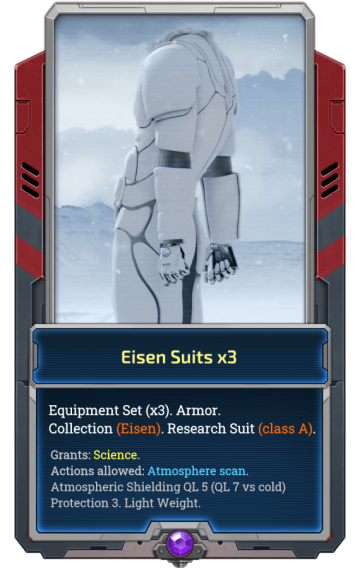 Armor is also available in Equipment Sets. For the cost of one of your ship's equipment slots, you can bring three Eisen Suits with you. There is one key difference to consider here. If you give a Suit to a crew member, he will begin Evacuation with his armor already equipped. If you bring an Equipment Set, the armor starts in the locker and will have to be picked up by your crew first. This is an obvious downside for Evacuation as it would take your crew some time to get combat-ready. If you want to bring Suits for use in Colonization though, this is a very solid option.

One such Suit would be the Eisen Suit. It has an amazing Atmospheric Shielding, especially against cold, grants a huge boost to Science, and even allows to perform an Atmosphere scan. If you equip all your scientists with an Eisen Suit, they are going to perform a lot better than what would be possible without one. 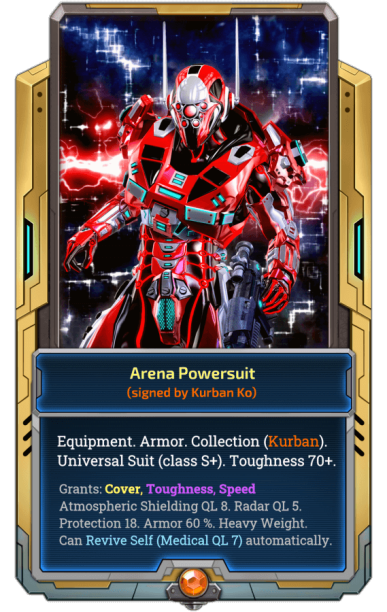 In case you wondered, yes, we have a legendary Suit prepared for you as well! The Arena Powersuit has everything you are looking for in a Combat Suit and then some. To even be able to wear it, your Trooper needs to come with a Toughness rating of 70+ or higher. To reach such a rating, you need to either be pretty lucky with your rolls or bring a character specially qualified to wear the suit. This could either be a character of a high quality level or characters with the Toughness trait on their card.

If a character is able to wear the suit, he becomes incredibly hard to kill though. 60% Armor, 18 Protection, a huge Grant to Cover and additional Grants to Toughness and Speed as well. Add a near-godlike Atmospheric Shielding of quality level 8 and a Radar of quality level five - just because.

The Arena Powersuit is the perfect package, some might even say it allows its wearer to possibly survive death itself. That is mainly because that is what the Powersuit does actually. If the wearer still manages to get killed for what ever reason, the Powersuit is going to revive him immediately so even death won't be able to stop your Trooper from fighting...

That's all from us today, we hope you are enjoying these daily reveals as much as we do. And since we do enjoy them so much, here is another random bonus reveal for you: 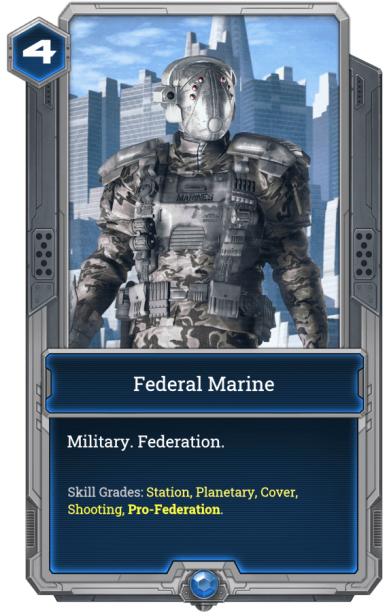 As always, your input is valued and appreciated so we would love to hear it!

Please follow to keep up to date on all things @eXodegame!

Hyperspeed to the eXode universe!

Those suits are awesome, thinking on creating my versions in the future! This game is going to be very interesting thing.

Would love to see some designs from you :-)

I wonder what the next spoiler will reveal... More equipment sets like the Rare Plants Collection or Diplomatic Gifts?

Man I just read an article about the whole “living in a simulation” hypothesis. This game just might be the beginning of one of those world simulations.

Congratulations @exodenews! You have completed the following achievement on the Hive blockchain and have been rewarded with new badge(s) :