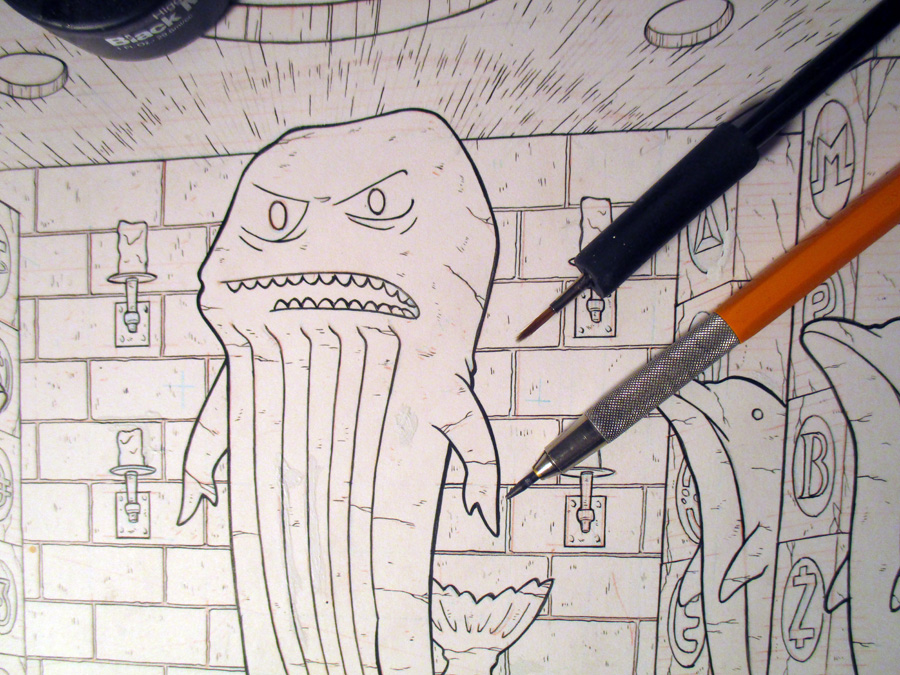 To say I work differently than other NFT artists would be a colossal understatement. When everyone else is discussing the programs they use...I slowly slide away and glance to my left... 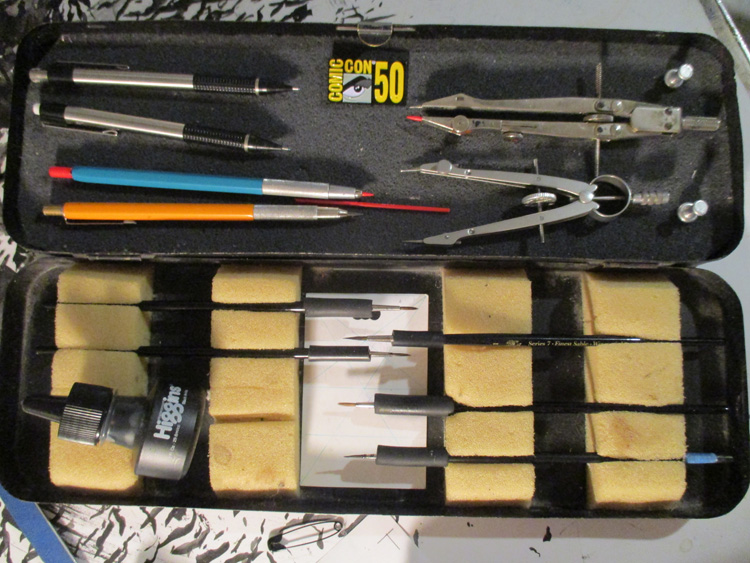 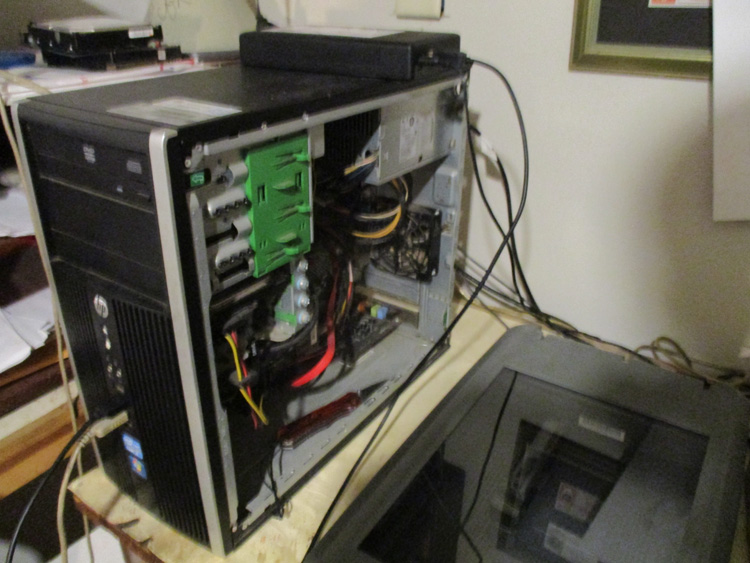 I think I got that when Avengers Infinity War came out...or maybe before. Sometimes I gotta jam that pocket knife in between the ram and the slot it goes in then jiggle it until the computer recognized the ram card.

In all seriousness I do have a better computer, but this one has a bunch of obsolete programs that I can't find anymore...and I haven't had time to figure out how to use the new versions. I'm a busy man.

The point IS...we all have our own creative process and no one knows where creativity comes from or how an idea develops. It could well be that the tools you use sway the kernel of an idea in different ways. And if you're happy with the results, then that's what counts, whether you are using procreate, a spray paint can, clay, or ink.

Onto this piece being featured at Consensus, thanks to the Whale community!

The beginning of one of my works is always a quick scribble/sketch. Sometimes of a visual I have in my head, sometimes I just sketch until a idea appears on the paper that I like. 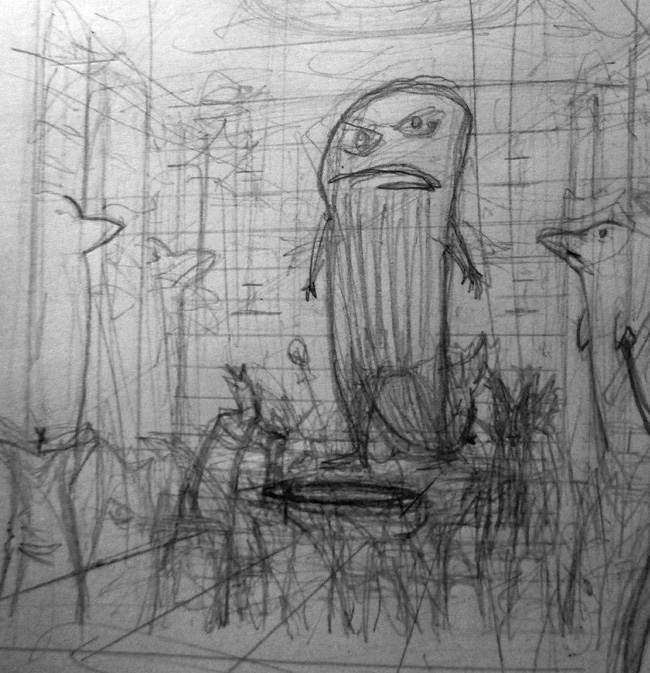 For a straight forward shot, you only need one but that can make for a visually boring piece, as every line would be angling to the middle of the picture...it forces the eye there and keeps it there. If you want some energy and life, you want that eye bouncing around a bit...exploring the illustration.

When you're animating...you can use movements to bounce the eye around, but I still like to do some of that with the beginning composition.

In this piece (below) the blue line would be the level the camera is at...and to keep things visually interesting I gave a vanishing point for the left and right upper lines, left and right bottom lines, and a couple for the lines that would be towards the middle... 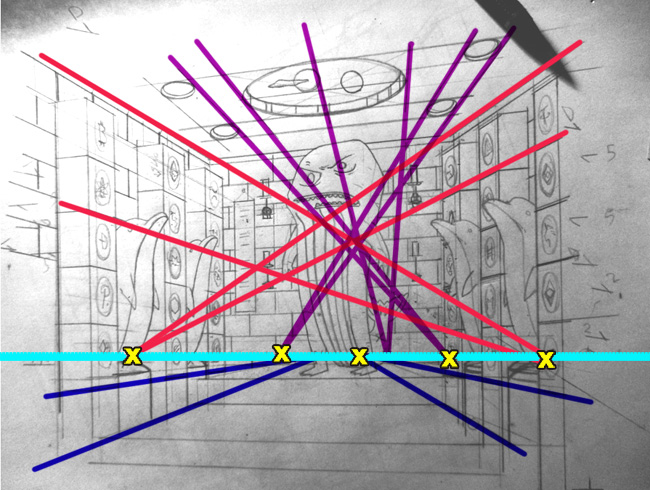 That's complicated and a lot of planning and technically with a straight forward shot you'd just need one vanishing point...meaning all the horizontal lines converged onto that one point and it'd be boring AF 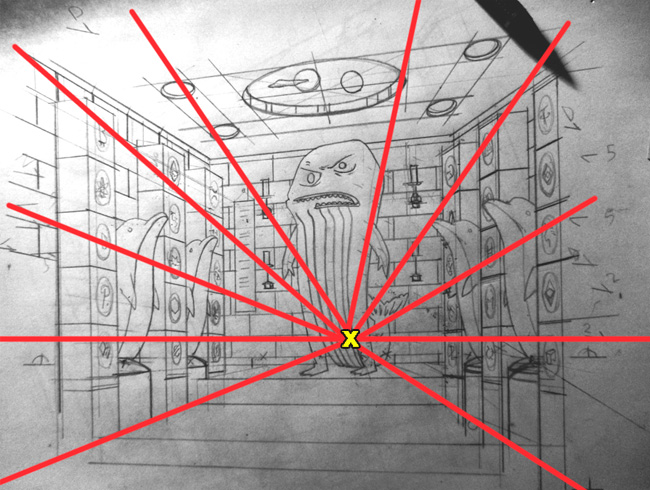 SO...anyways...that's the background of the whole thing. Once that's figured out I can do the final pencils and inks and have the foundation for the figures and movements. It's a good solid background and gives me confidence that the rest doesn't have to more than it's fair share for the piece to be interesting. 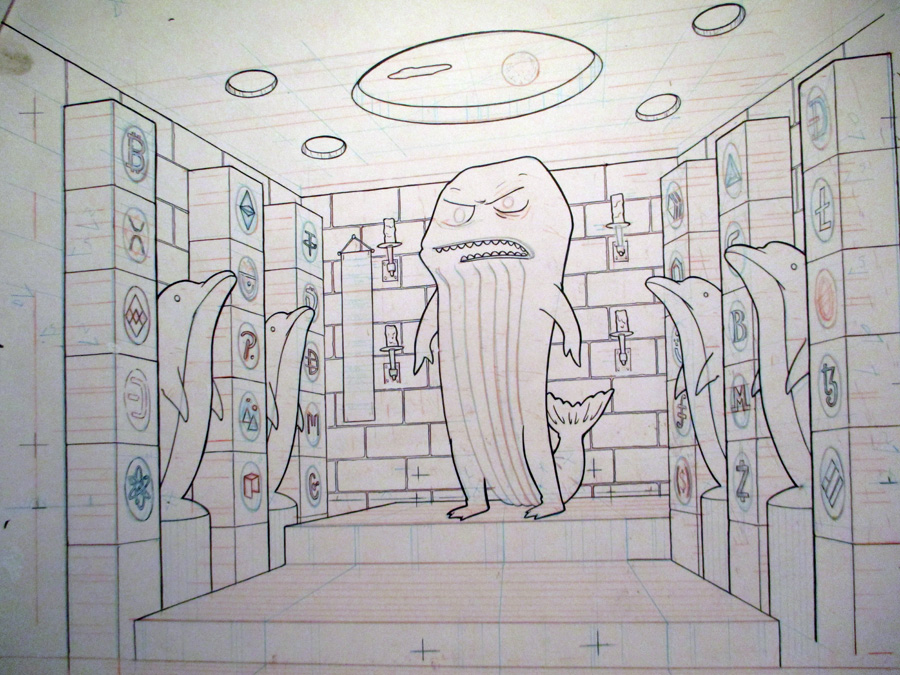 and sadly....that one up there, I ended up screwing up and starting over...which was good actually because I had realized that the scroll/banner hanging from the left hand side was going to make a visual mess once the figures and movement is added... 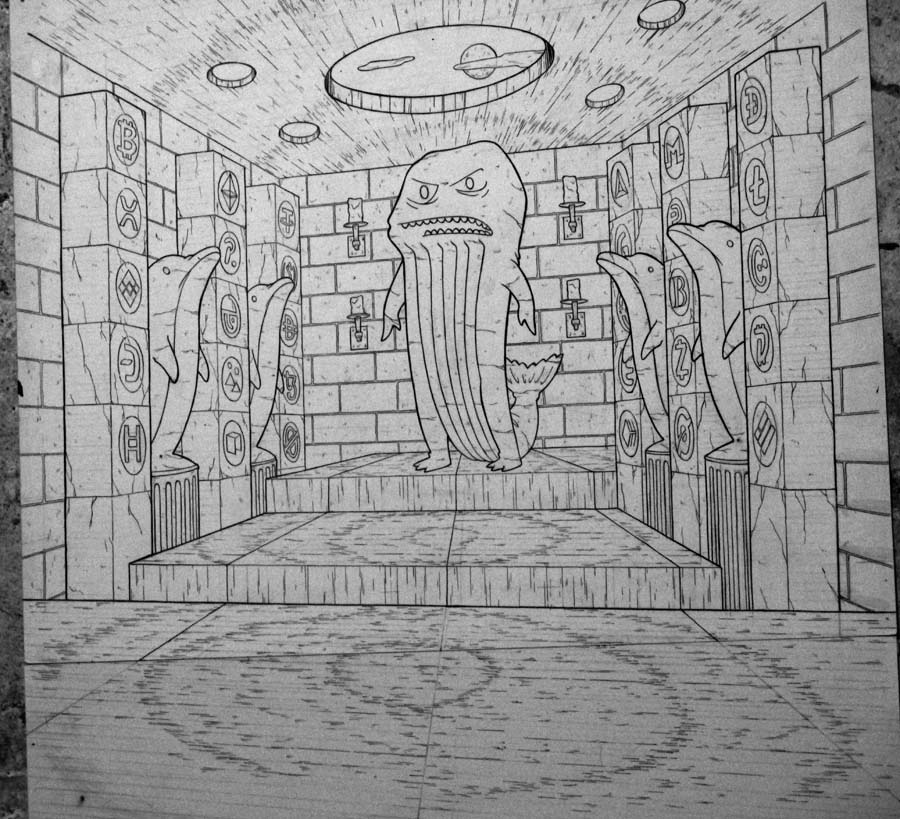 The pattern in the texture of the floor, I originally was going to have them sort of just flow into towards a center-ish vanishing point , but instead went with this circle patter thinking it would work better. BUT after adding some of the animation I decided ...the circle pattern was an example of being too smart by half. I had already done enough with the composition to make sure the a burst pattern wouldn't be optically oppressive ( that's a term I just made up now), and the texture flowing towards the middle actually worked better... 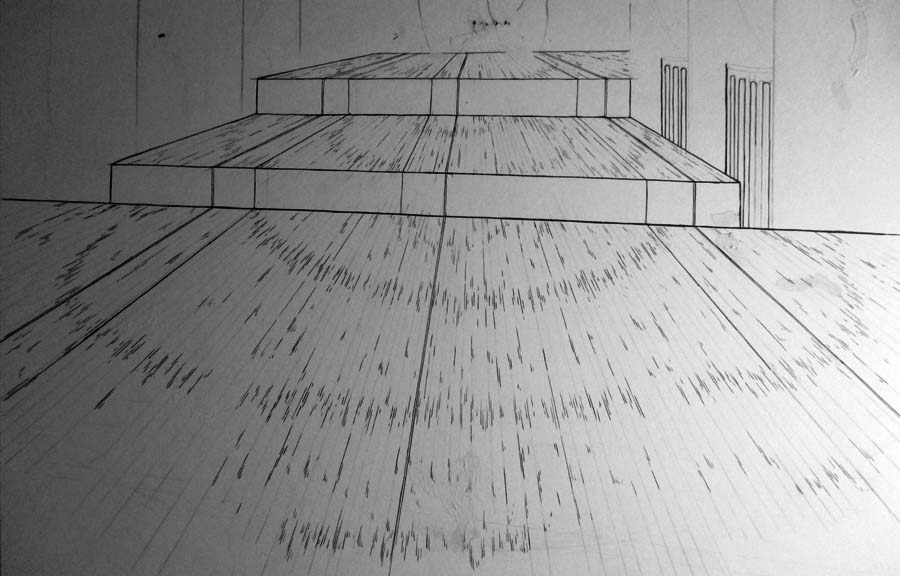 check em out side by side...see how the first makes the floor seem a bit narrower, makes you feel as though you are viewing it from just a slightly different angle, kind feels different? Ain't optical illusions amazing?

BEFORE...we move onto the other layers and animation, lemme just show off some of this inking, because...it turned out pretty decent. 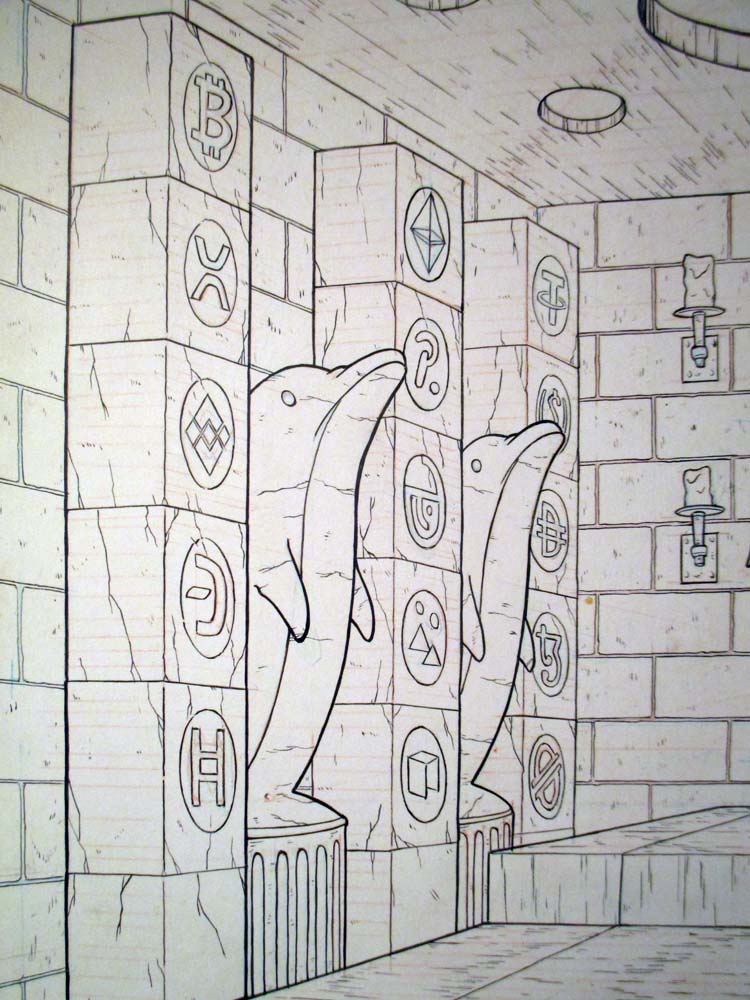 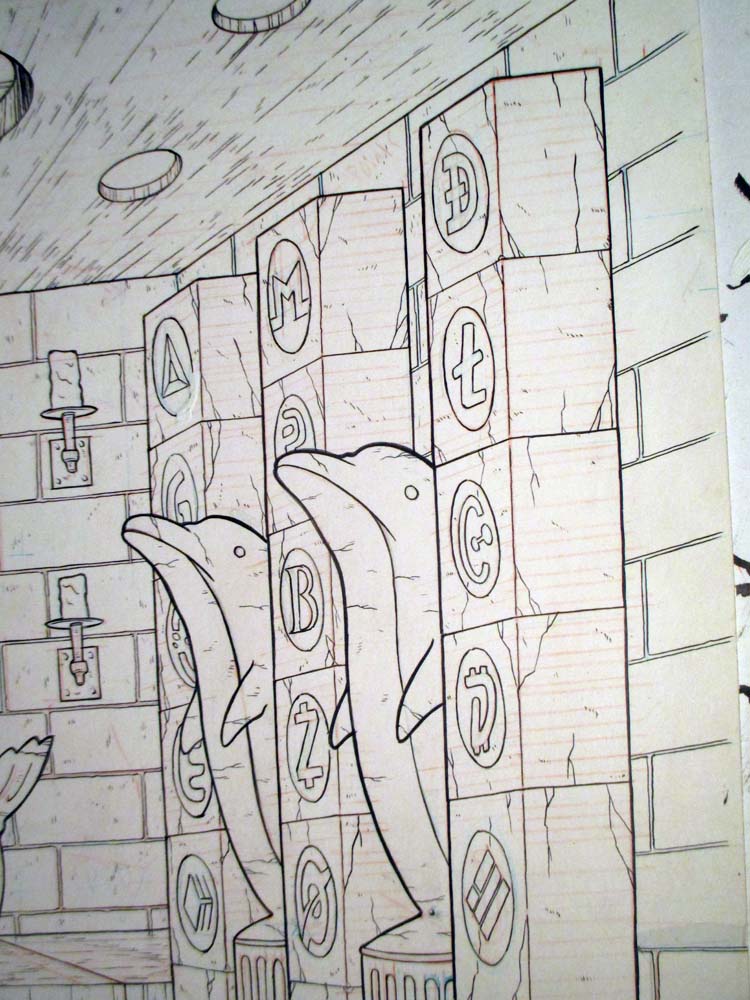 Say....what's that crypto on the bottom left? Looks kinda familiar. 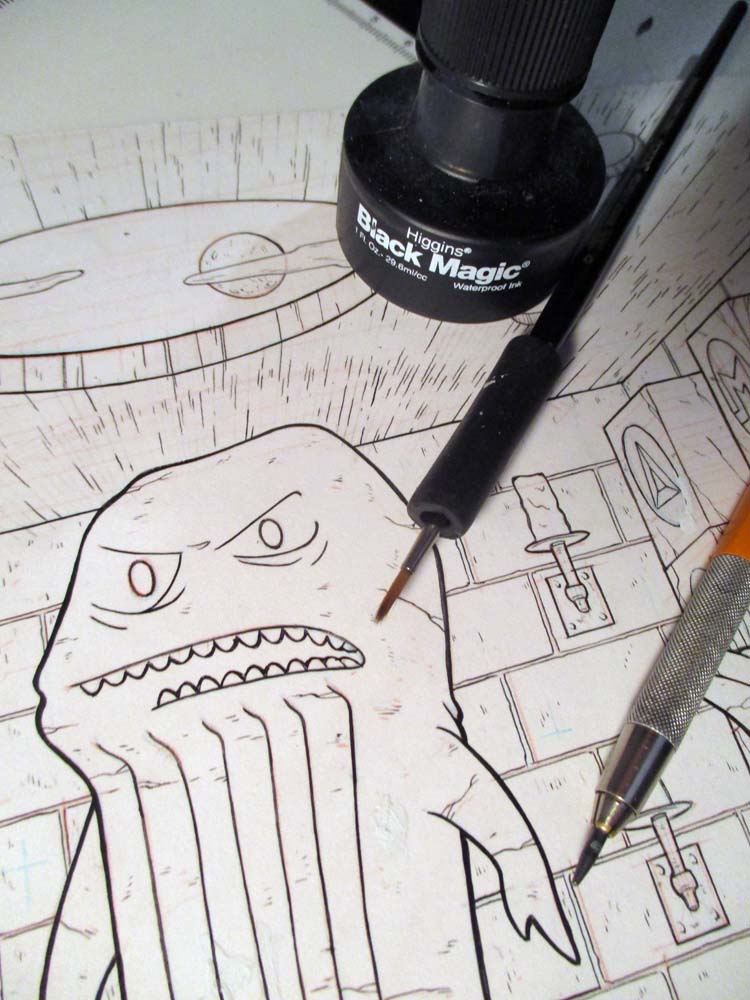 SO...then I decide on the movements, and draw up all the figures and things that move or stuff that need to be on a different layer and ALL the variations of anything moving, like old school animation cells. This is an instance were doing it old school has a purpose. There are animation programs that are great and save time and I have used for longer things, but when you are using hand drawn elements they leave visual flaws and technical inaccuracies. If this was a 20 minute cartoon...I'd cut some corners to save some time. But I put the work into the details off the background and so the details of the figures and everything else...on every cell...needs to have that same level/style of detail or it'll stick out and just not look as good.

So, to me it's worth the time. I won't deluge you with all of it, but here's some samples... 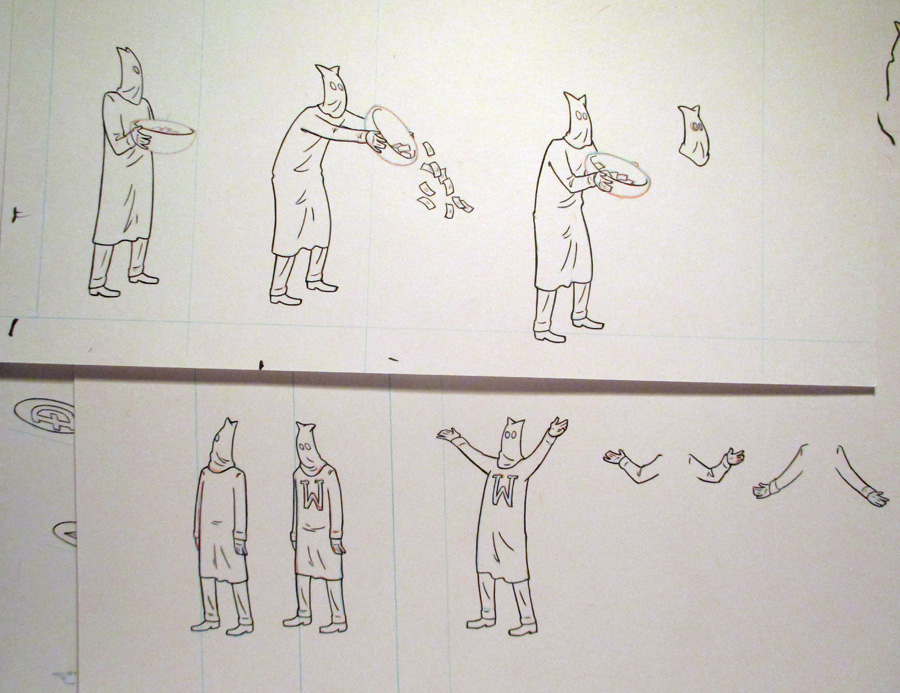 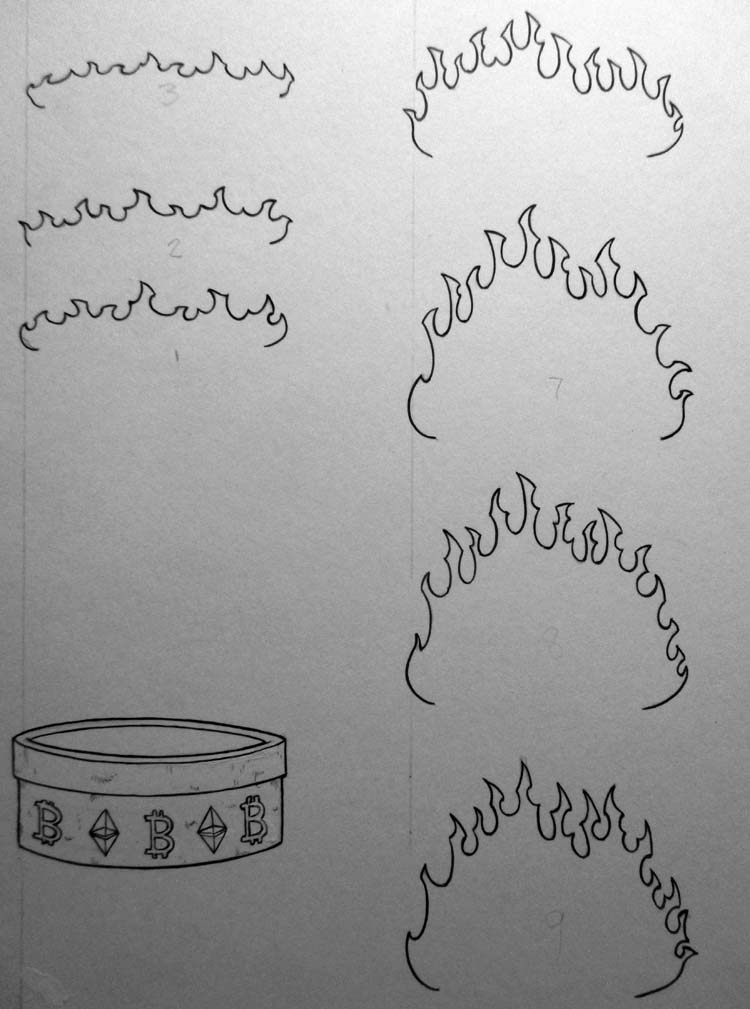 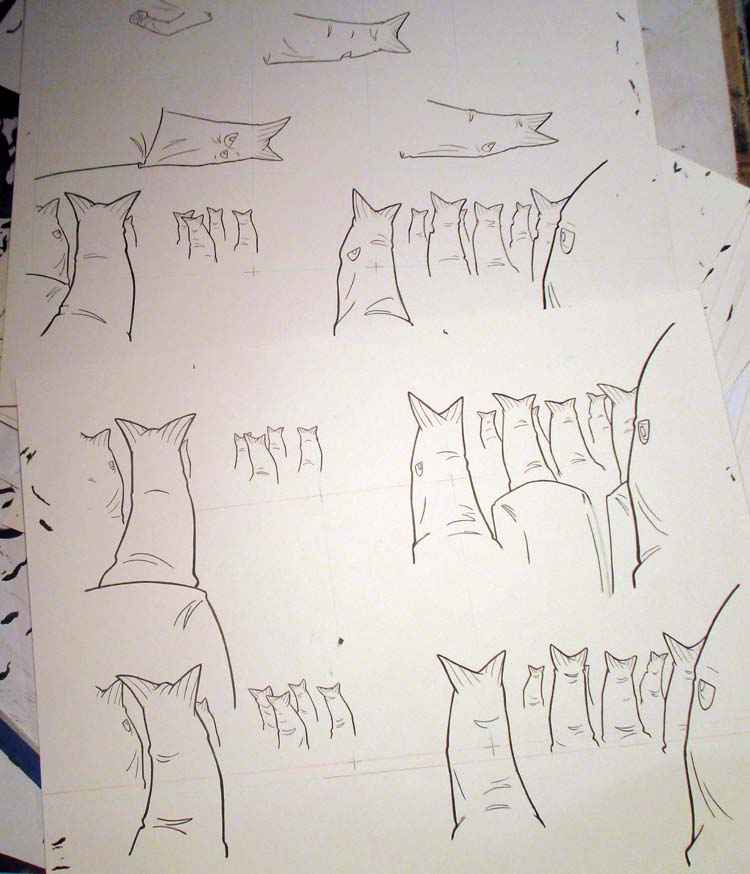 There's more fire and figures, but you get the idea...here's the whole stack... 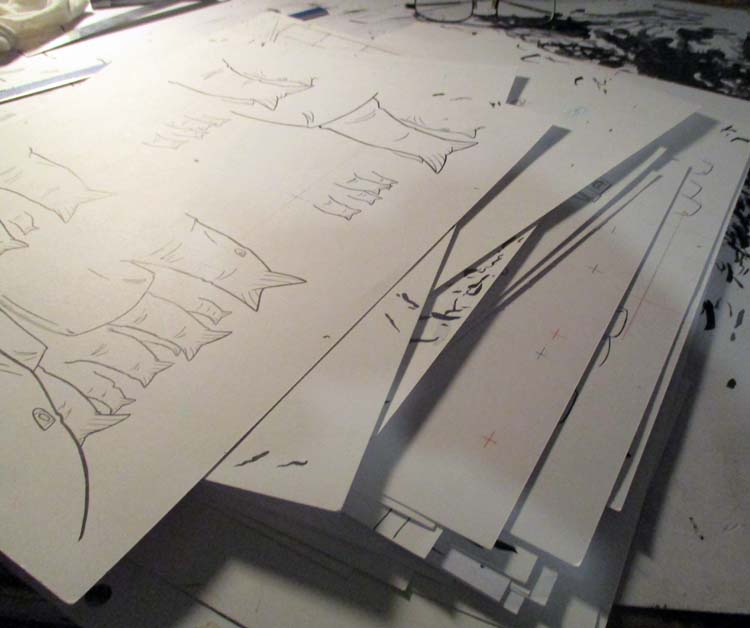 NOW...all kidding aside, I do know my way around animation programs and such. I produced a 30min animated pilot, have done story boards and such, had cartoon shorts on comedy central. Admittedly though, these programs advance and get better by the month so I am a bit behind. I'll show you why I felt hand drawing lots of cells instead of using the computer shortcuts were important in this one.

In most animation programs you can take a element ( like a head) and attach it by a hinge. 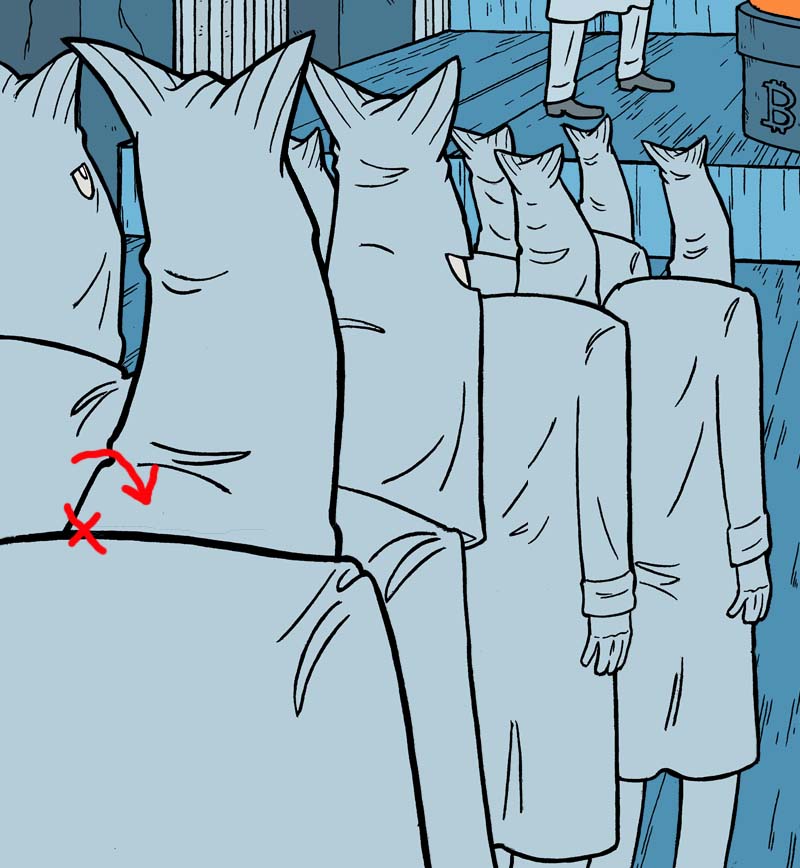 And you can simply bob the drawing of the head back and forth by the hinge (we're talking 2d here...3d has different tools and principles)

IF this were a 20 minute cartoon, that'd be reasonable. And if it wasn't all hand drawn there's a way you could make that work with a tweek or two. But my goal is always to capture people's imaginations, and anything that stands out from the rest, even for a moment, can pull people's imaginations out of the reality I've tried to create.

The background and everything else is cartoonish, but all has a certain level of reality to it, a level of detail. The movements have to have that same level/feeling. When one of these guy's heads bob, the fins should bend, the lines on the fins should bend with them, the fabric would wrinkle more or unwrinkle...

It's a small thing...but the difference between success and failure is doing many many small things correctly. I think I read that in a fortune cookie. Too bad I didn't get the fortune cookie that said " screw it, okay is good enough"

Anyways...before all of that inking of moving elements was a bunch of tests of rough drawings...

hahaha...this one cracks me up. Honestly, this little test was the point I decided to really go all out on this piece. I watched it and I myself wanted to see wtf it was all about.

So...then you color the background 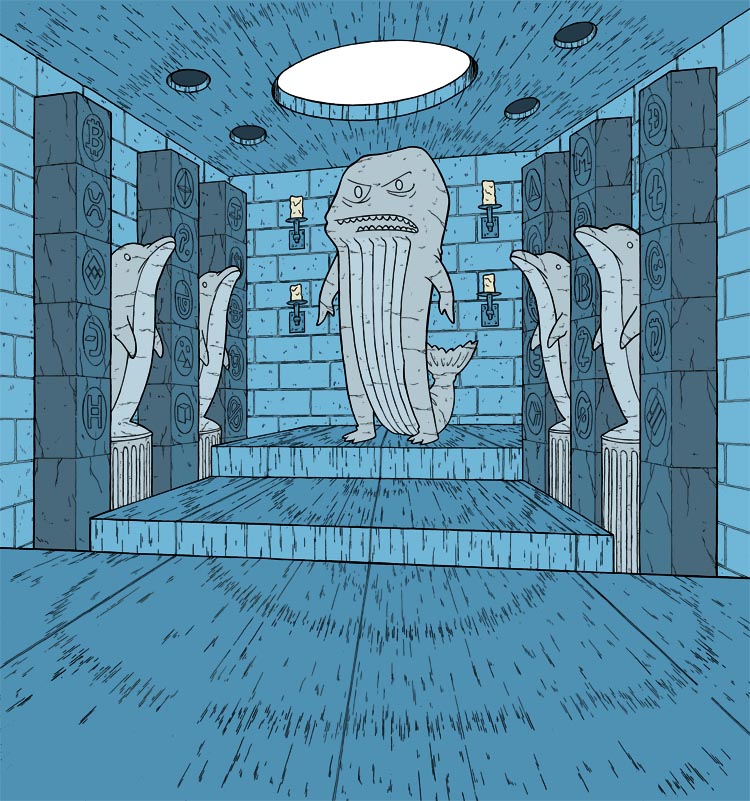 and color the rest... 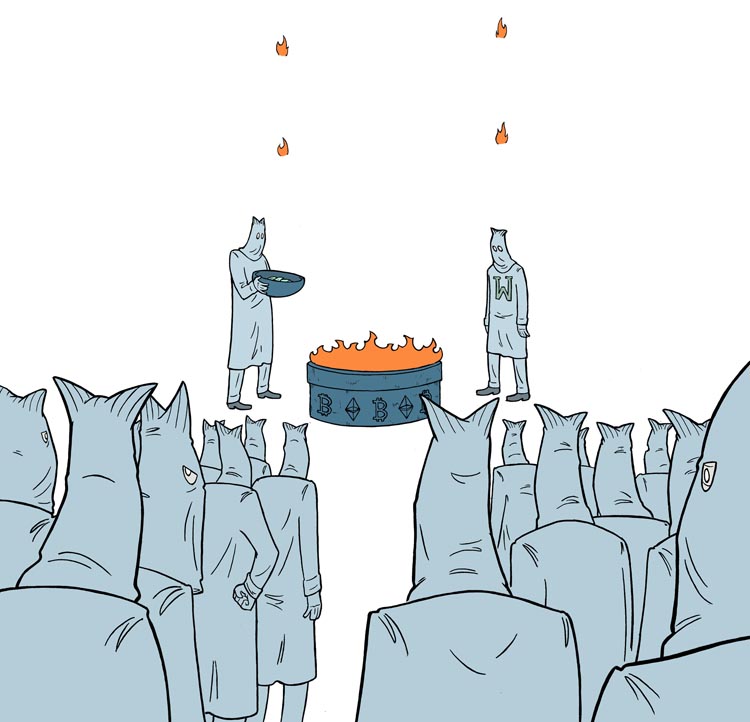 and animate the the thing! Not much I can explain about many hours of clicking a mouse and shifting something over 2 pixels. And that's all I can show you right now! 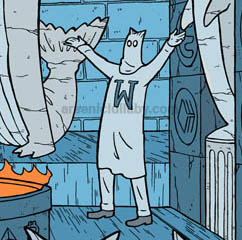 Stay tuned to see the finished piece and be sure to find it and me, and the rest of the Whale Fam nft artists at CONSENSUS2021! 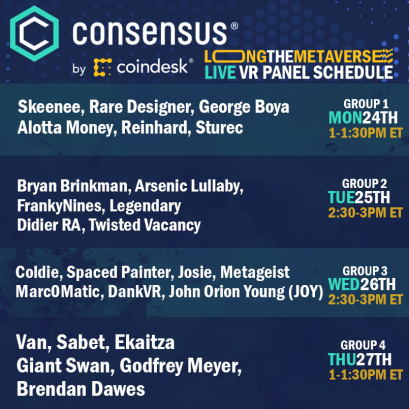 The Whale community home base is here-https://twitter.com/whale_community

More of my NFT art can be found here - https://makersplace.com/arseniclullaby/

More behind the scenes pics of other work- http://arseniclullabies.com/nft.html

I love it when creatives share their process and it certainly doesn't hurt if they are as skilled as you. This looks amazing!

I picture myself as one of the dolphin statures at the side of the whale king.

Enjoy your week and greetings from Portugal!

Thanks! Glad you found it interesting! I'd probably be the guy giving the viewer the stink eye LOL Hope things are good in Portugal!

The perspective in that drawing is awesome!, love those dolphins statues on the wall. That must be a lot of work!.

Thanks! I was a bit of work, haha. The Dolphins were tough, thy kept looking like penguins in the first couple of tries XD