Hydrogen is one of the most abundant elements in the universe, not to mention that it is one of the constituent elements of water, and on the planet we can find it as part of many compounds, in fact it is very abundant in organic compounds, i.e. hydrocarbons, however it is also present in inorganic matter, such as salts and hydroxides.

And thanks to certain characteristics of this element, such as a high energy density, hydrogen gas has been considered as a clean energy source and a potential substitute for fossil fuels, since its combustion produces only water and energy as products. However, its handling in liquid or gaseous form is complicated, so many researchers are looking for ways to store it in solid form. 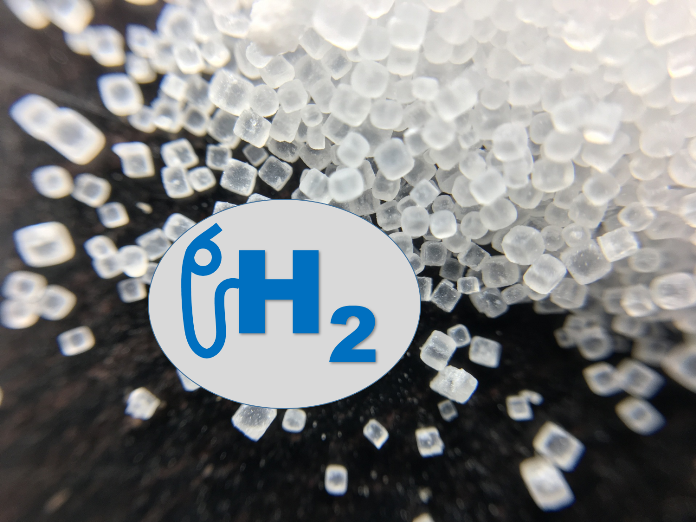 Storing hydrogen in solid form would be a good alternative for safer handling. Source: edited image, original taken from publicdomainpictures.net.

In addition to its high volatility and flammability, hydrogen, compared to other fuels, has a low density, which makes large volume tanks necessary to contain a similar amount of energy. This also complicates the handling and storage of large quantities of hydrogen; in general, its storage in gaseous form requires pressures between 200 and 350 BAR, and containing it in liquid form generates another problem, since in addition to containers that can withstand high pressures, they must also maintain the cryogenic temperature of the liquid, approximately -250 °C. This is why many scientists have taken great interest in developing other forms of storage. One alternative, although currently perhaps the least well known but one that has attracted the most attention, to avoid the problems associated with storing and transporting gaseous hydrogen is its storage in solid form, most notably hydrogen storage in the form of metal hydrides, However, these methods usually require metals such as titanium, nickel, manganese and chromium, and also require a lot of energy to release the hydrogen for later use. An example of this type is the following reaction:

But, as an option for solid hydrogen storage, a group of researchers have reported in the journal ACS Central Science to have developed a new system for storing and releasing hydrogen through hydrogenation and dehydrogenation of salts. This group of scientists focused their research on a feasible process for reversibly storing and releasing hydrogen by interconverting bicarbonate and formate salts in the presence of natural α-amino acids.

Scheme of chemical hydrogen storage and release based on bicarbonate/formate interconversion. Source: image elaborated in Powerpoint with research data.

The research group found that the conversion of bicarbonate and hydrogen to formate, and its subsequent regeneration, was most efficient with potassium salts in the presence of a magnesium-based catalyst, a more available metal, and an amino acid as a promoter. And after applying five cycles of storage and release, the method produced a hydrogen yield of greater than 80% of high purity (>99%).

Thus, this research provides a feasible method that allows the storage and release of hydrogen by interconversion with magnesium-catalyzed bicarbonate salts promoted with amino acids under relatively mild reaction conditions.

This would certainly allow the use of low-cost carbonate salts and metals such as magnesium, a more readily available metal, in a reversible, on-demand chemical hydrogen storage and release system that presents a better alternative to storage by conversion to metal hydrides or cryogenic storage.

Well friends, I hope you liked this information about a different alternative to store hydrogen, something important to advance the use of this element as a clean energy source.

Hydrogen for the power solution and now for that lol thanks for the interesting article
!1UP