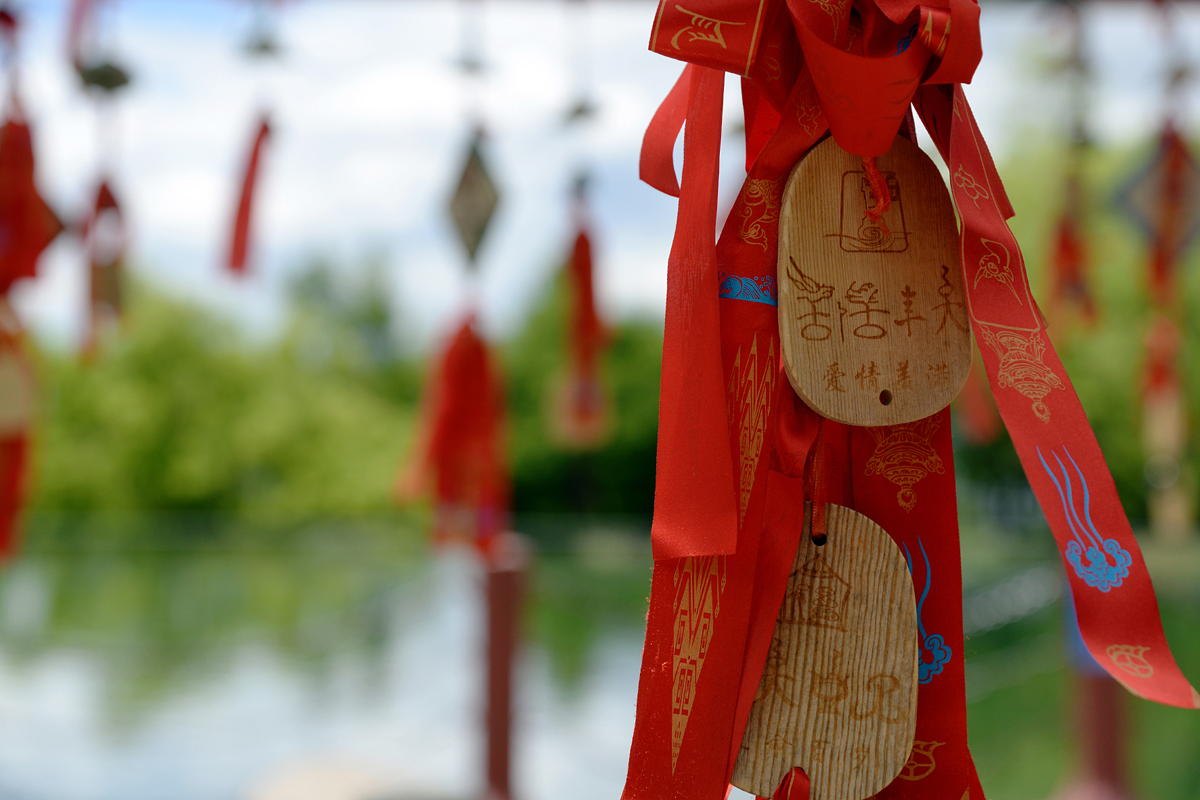 A couple of years ago I was on a tour of China. One of the provinces we spent time in was Yunnan. Lijiang is one of the larger cities that we used as a base to explore surrounding areas. Our hotel was situated in the old part of town with cobbled, narrow streets and alleys that made us feel as if we walked in a labyrint. Lijiang is also home to the ethnic minority group of the Naxi people.

Lijiang is situated in the northwestern corner of Yunnan, close to Tibet. Because of similarities to the Tibetans, it is belived that the Naxi people originally came from Tibet. They are not only influenced by the Tibetans, but also from the Han Chinese when it comes to culture and religion. The Dongba religion is a shamanistic religion with close connection with nature. Long before it was established, sorcery and sacrifical ceremonies were practiced. 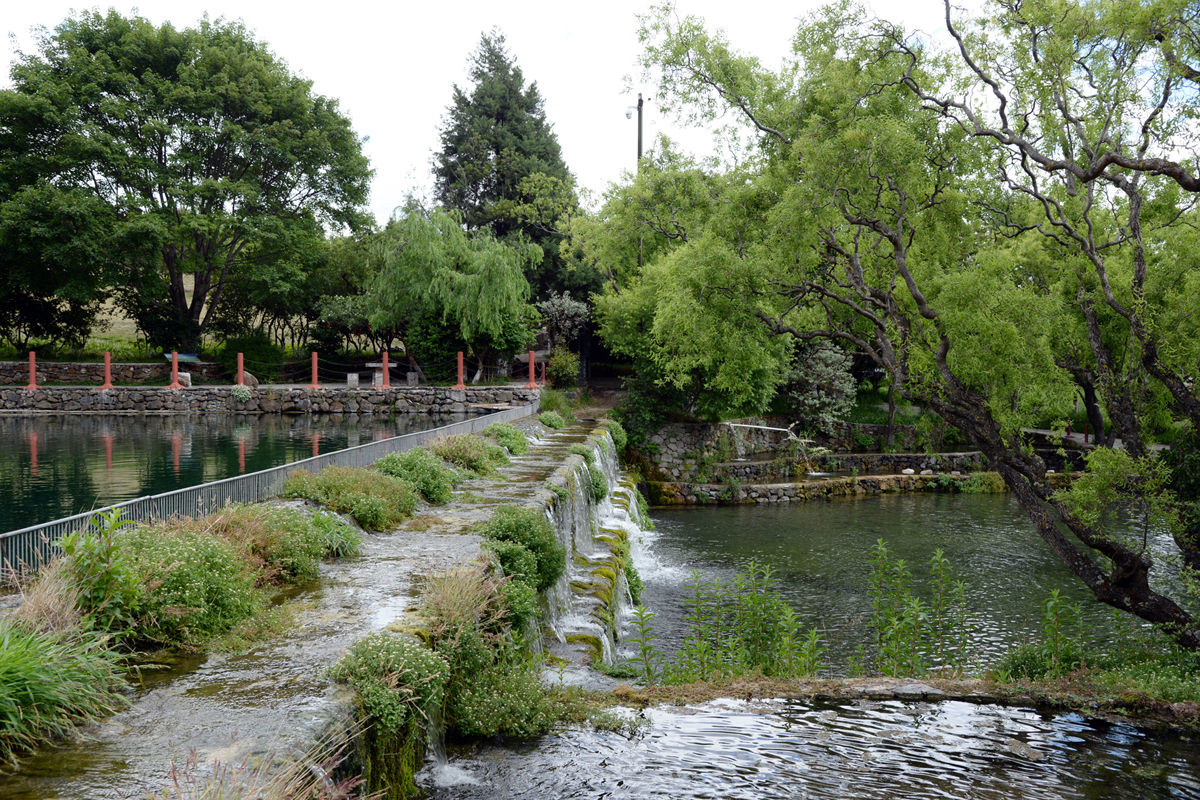 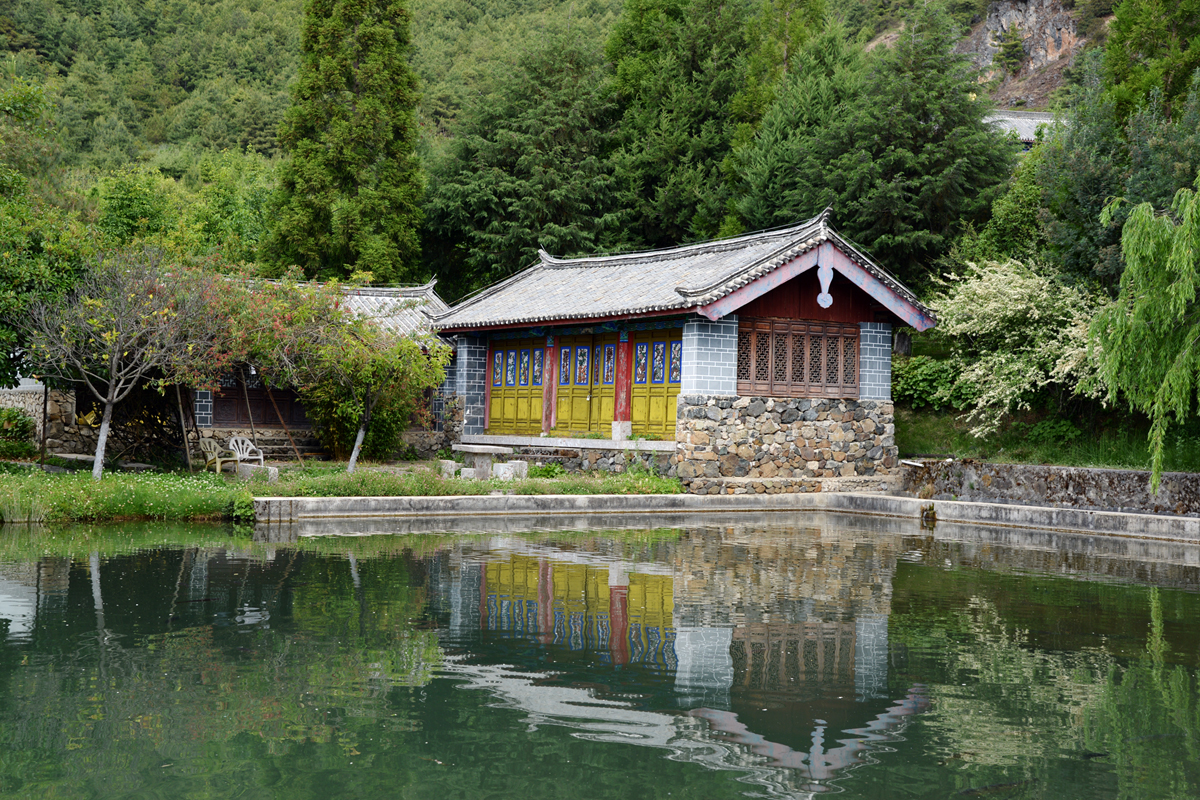 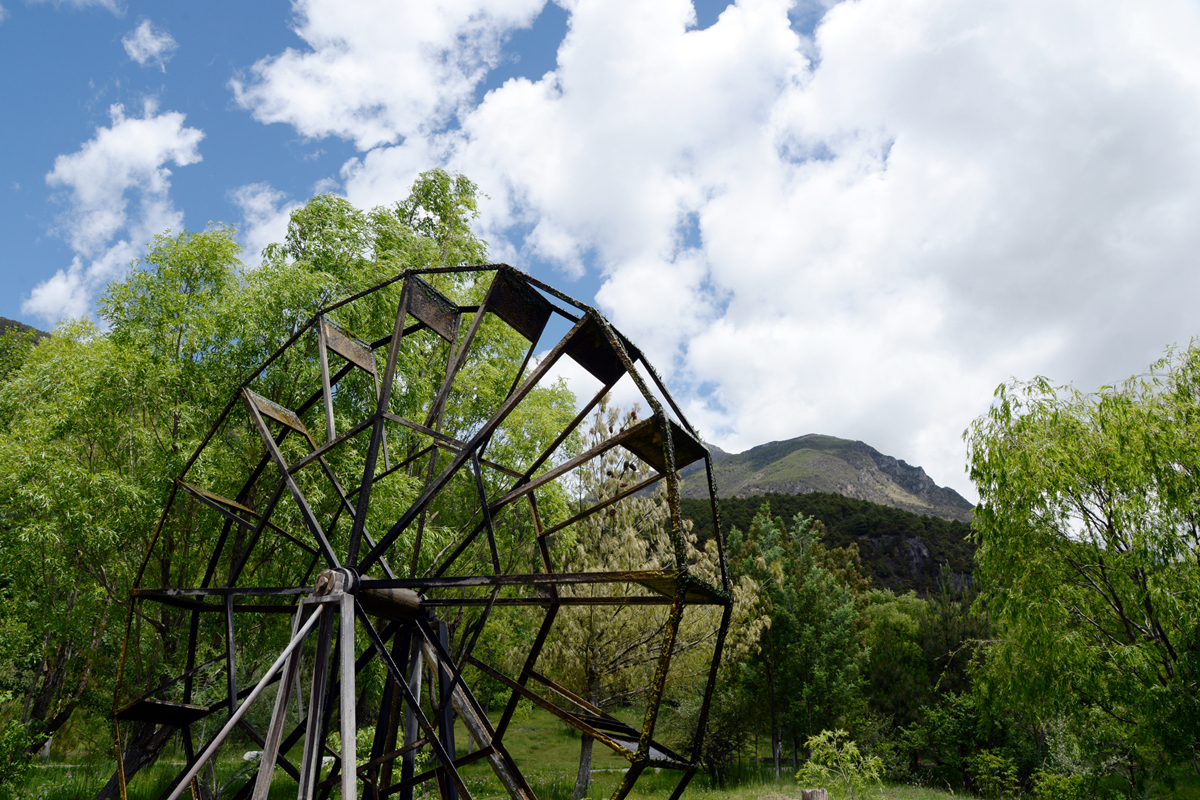 One day we took a full day trip to 3 ancient Naxi villages just north of Lijiang. We found that we could take the local bus to all three as they are located along the same road. When we first got on the bus, we didn't manage to find out where we were going to get off to visit the first village, Shuhe. Noone spoke English on the bus. So we continued to the terminus, about 15 kilometers further up the valley at the third village - Jade Water Village. This was also where we spent the most time. It is both special, but also located in a beautiful landscape. 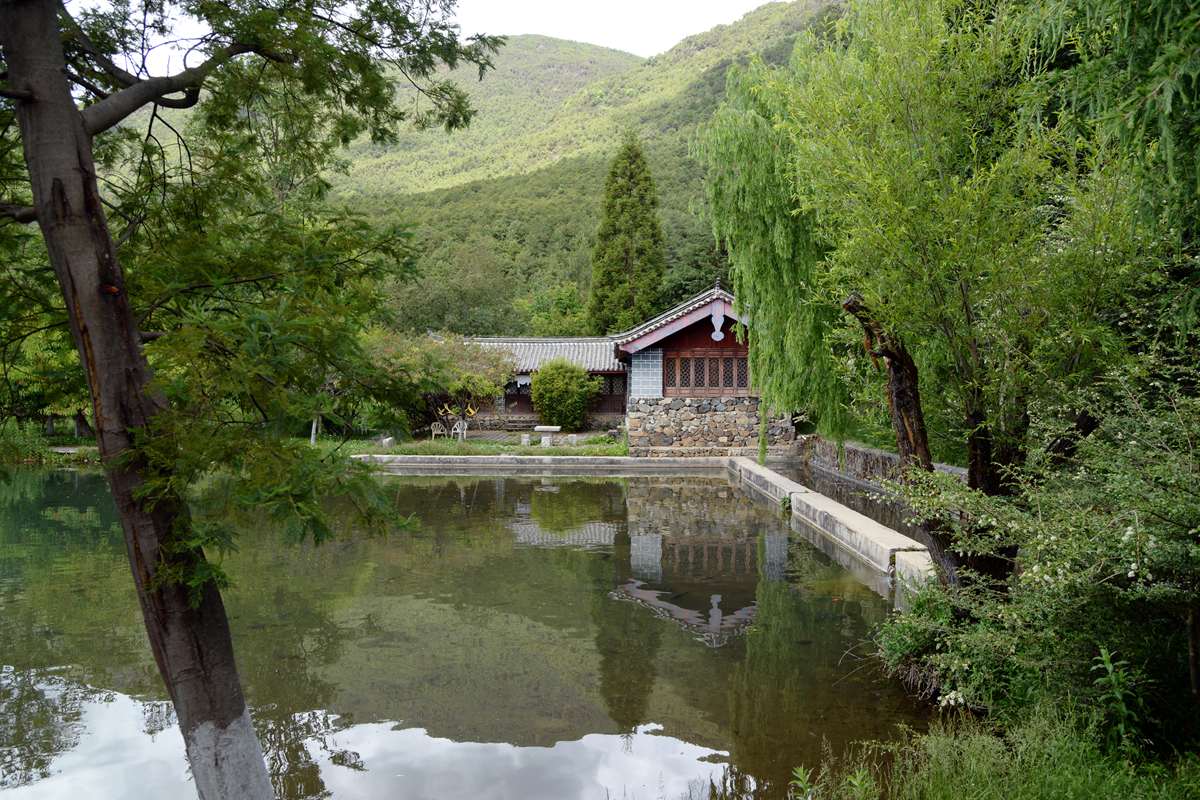 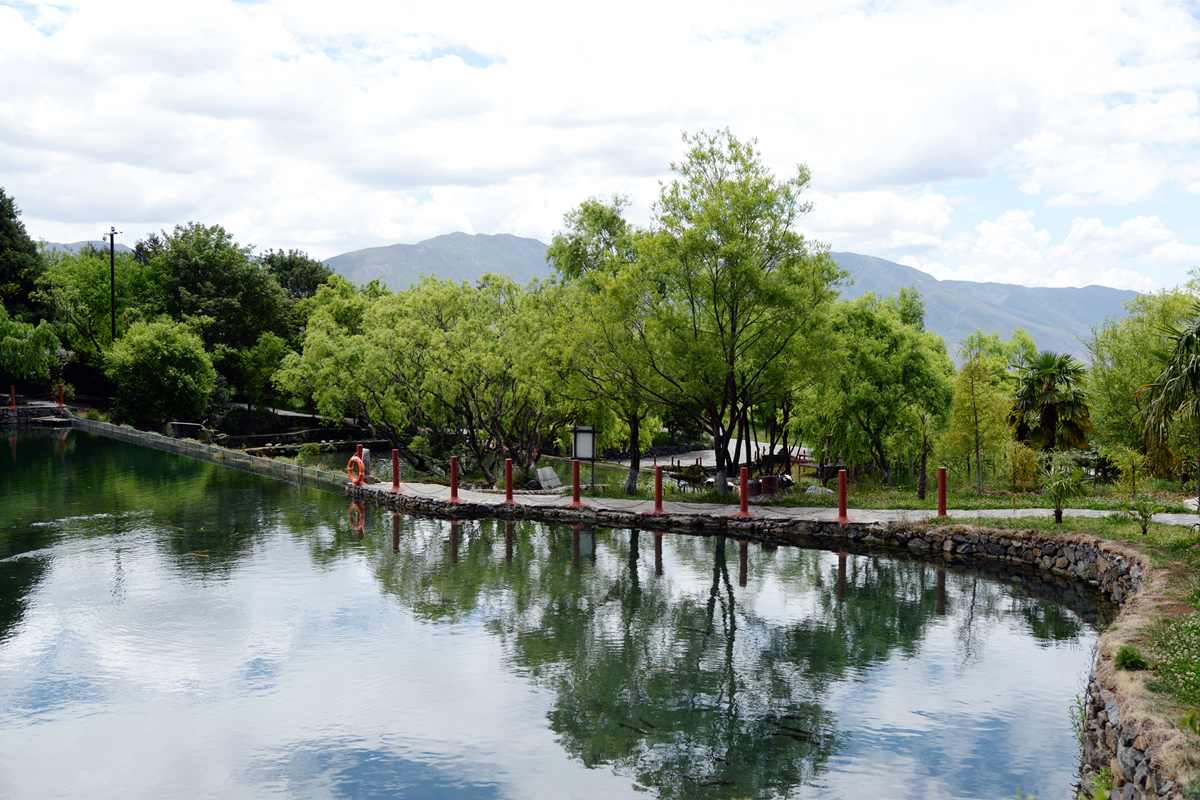 The Jade Water Village is located right at the base of the Jade Dragon Snow Mountain, at an altitude of 3000 m.above sea level. The village is a Dongba Culture Heritage Base and an important part of the Naxi's culture and religion. The village is located by a a natural underground spring. The water flows out and into several pools and there are several small waterfalls. It’s probably because of the water it looks so green. 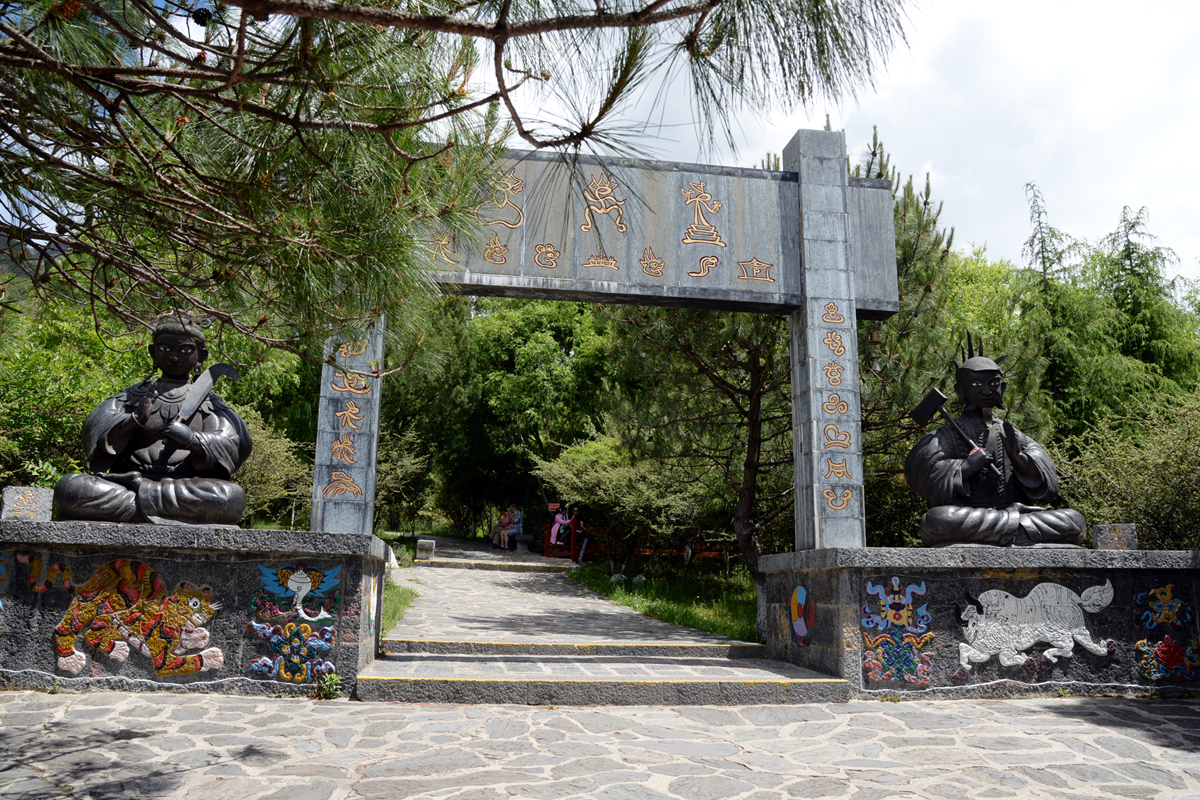 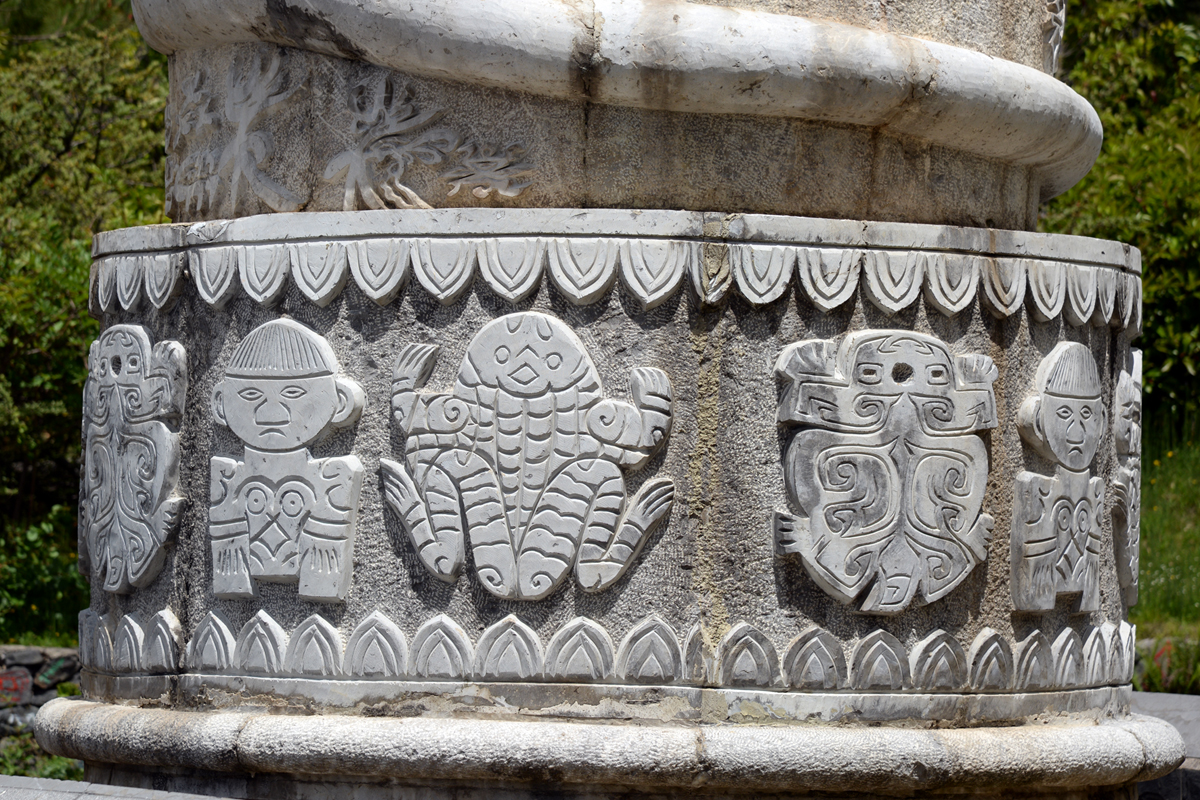 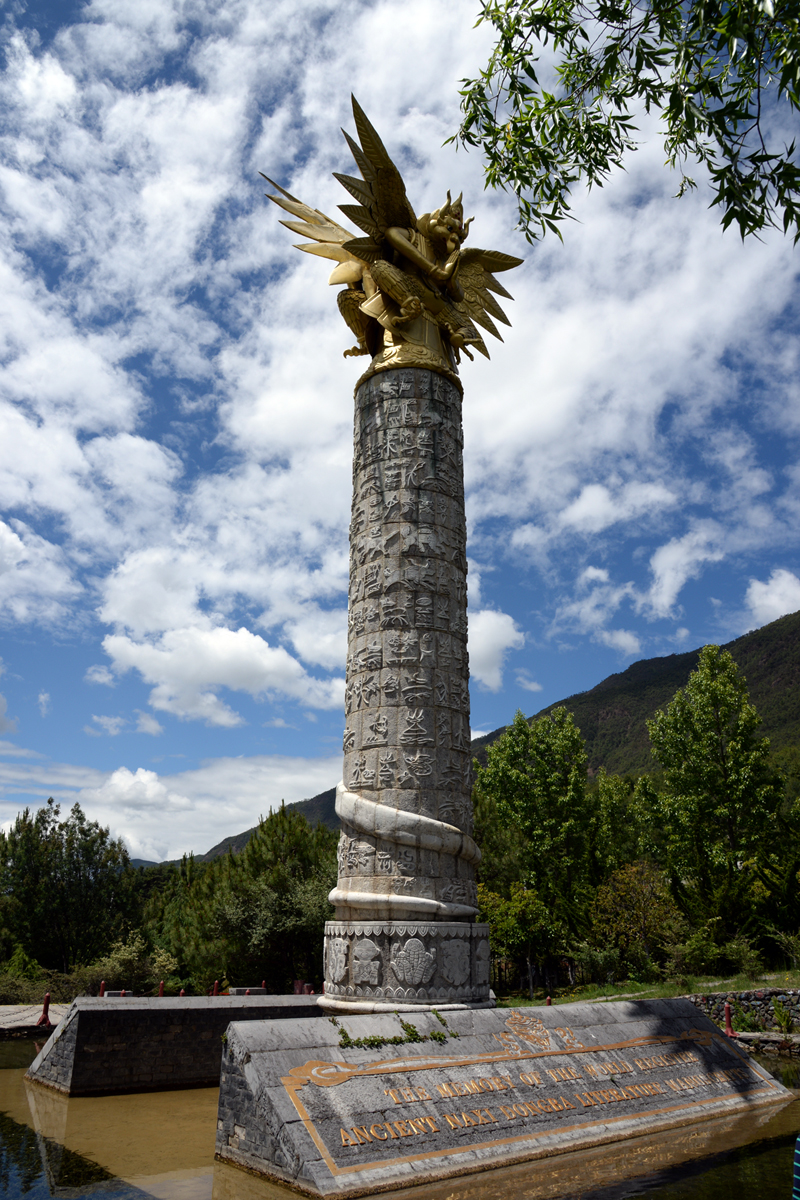 Ancient scriptures monument.
We entered the village through the Holy Gate, which has two door-gods. The mother god of the Naxi people is sitting on the right side and the father god on the left. The pictographic characters on the archway means / or tell of the holy land of the Dongba sacrificial offering. The script that is called Dongba Script consists of pictograms and is still in use. It's a kind of hieroglyphic writing system. I believe it's the only one of it's kind that is still in use. 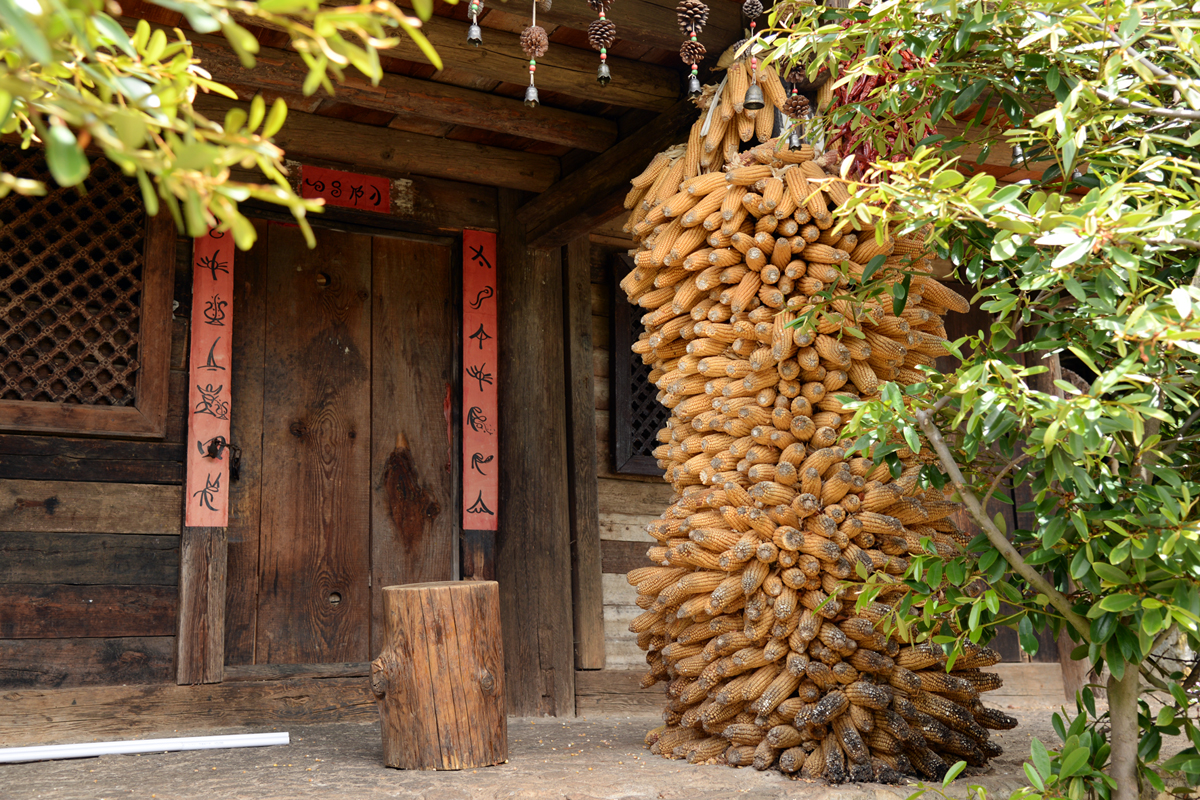 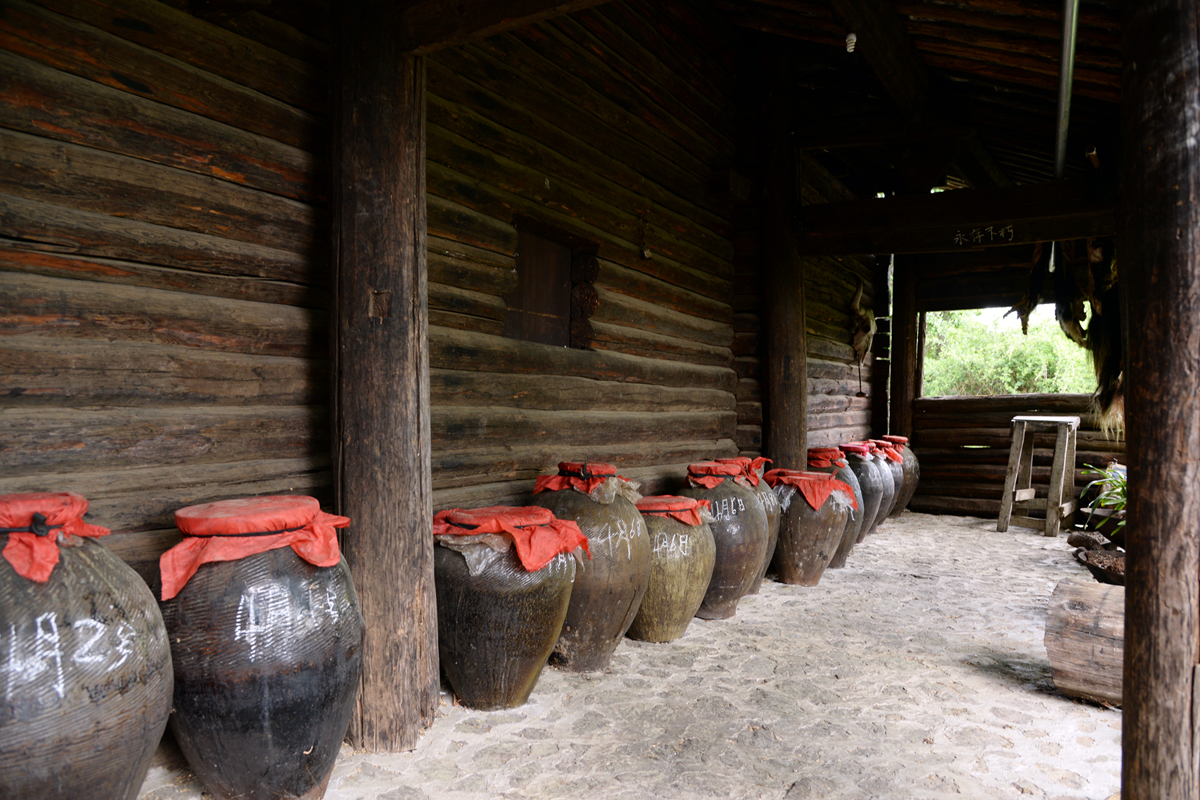 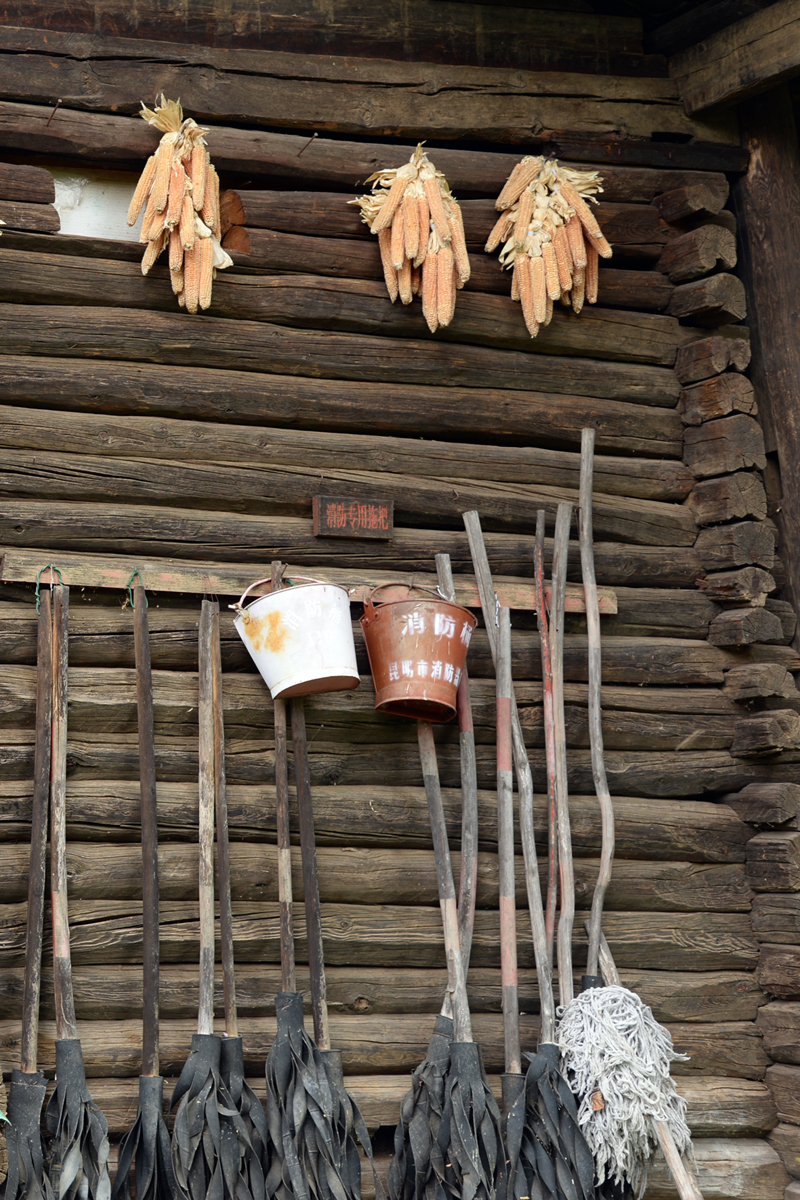 The Naxi's are matrilineal. It's the women who control businesses, but even so it's the men who are the local rulers. The Dongba religion is the religion of the Naxi people and it makes up an important part of their culture. 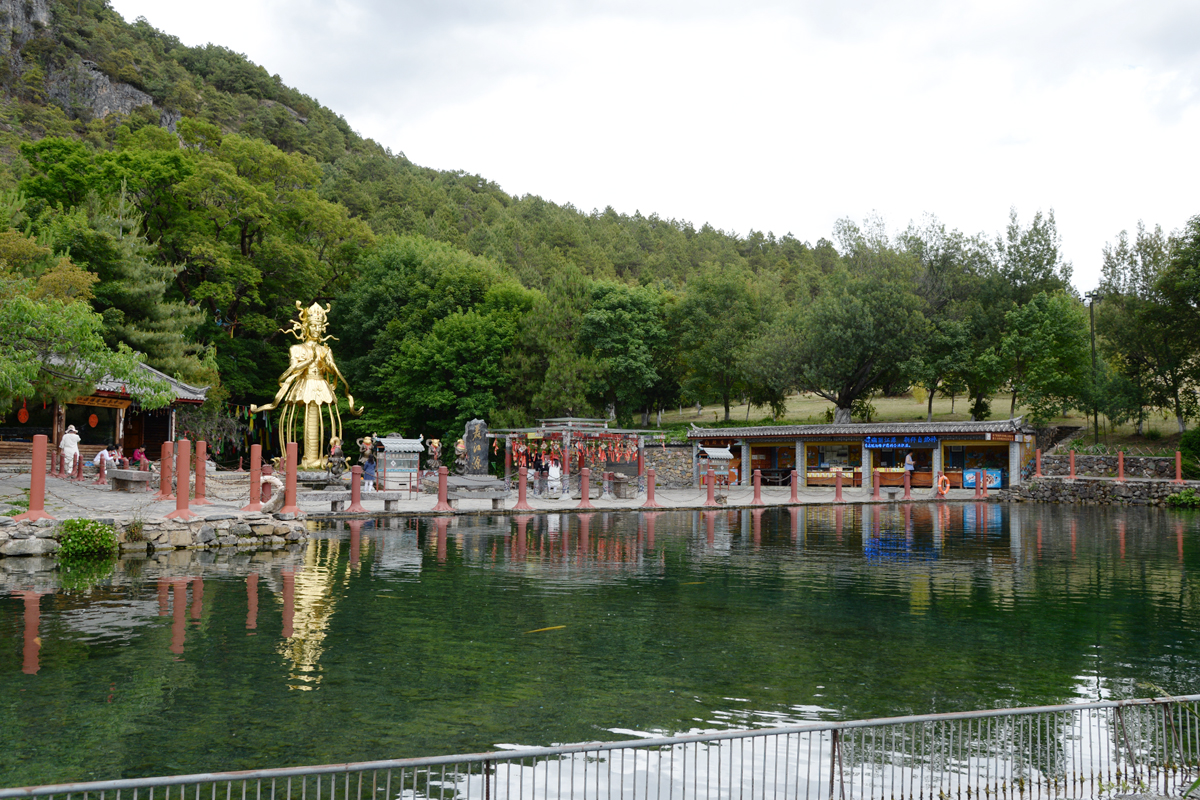 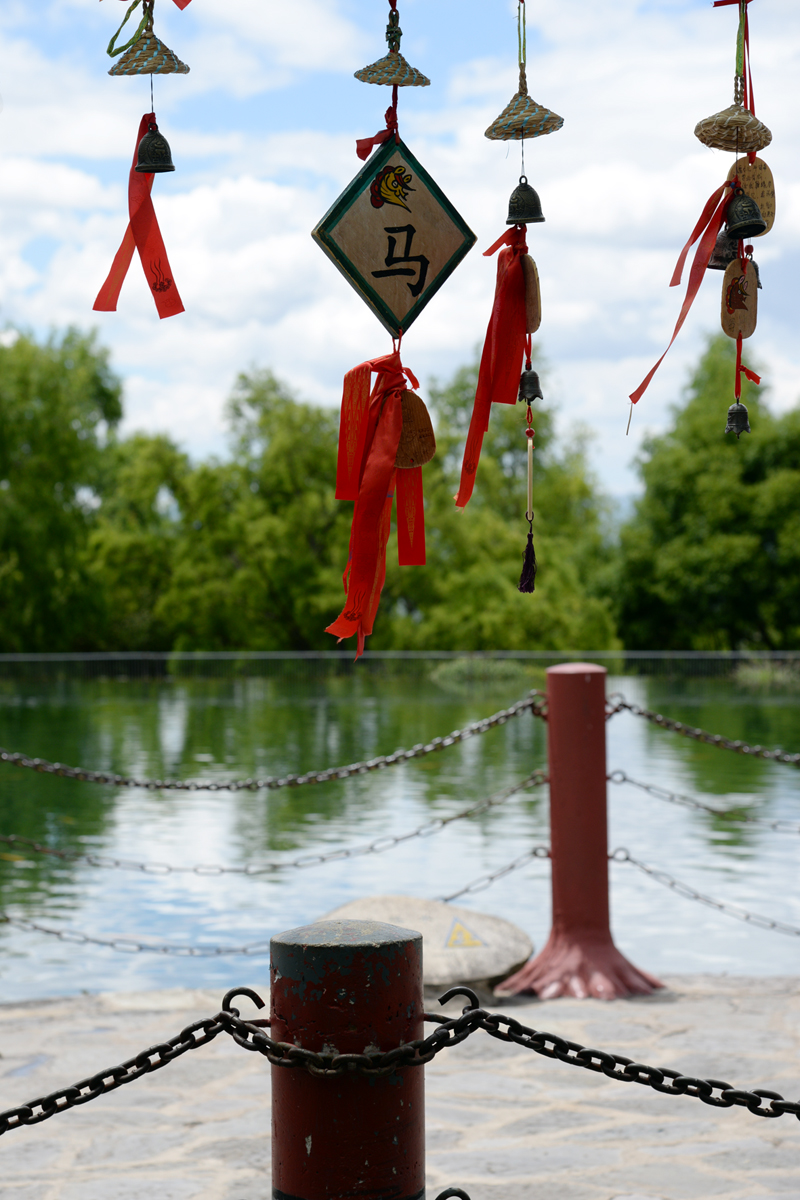 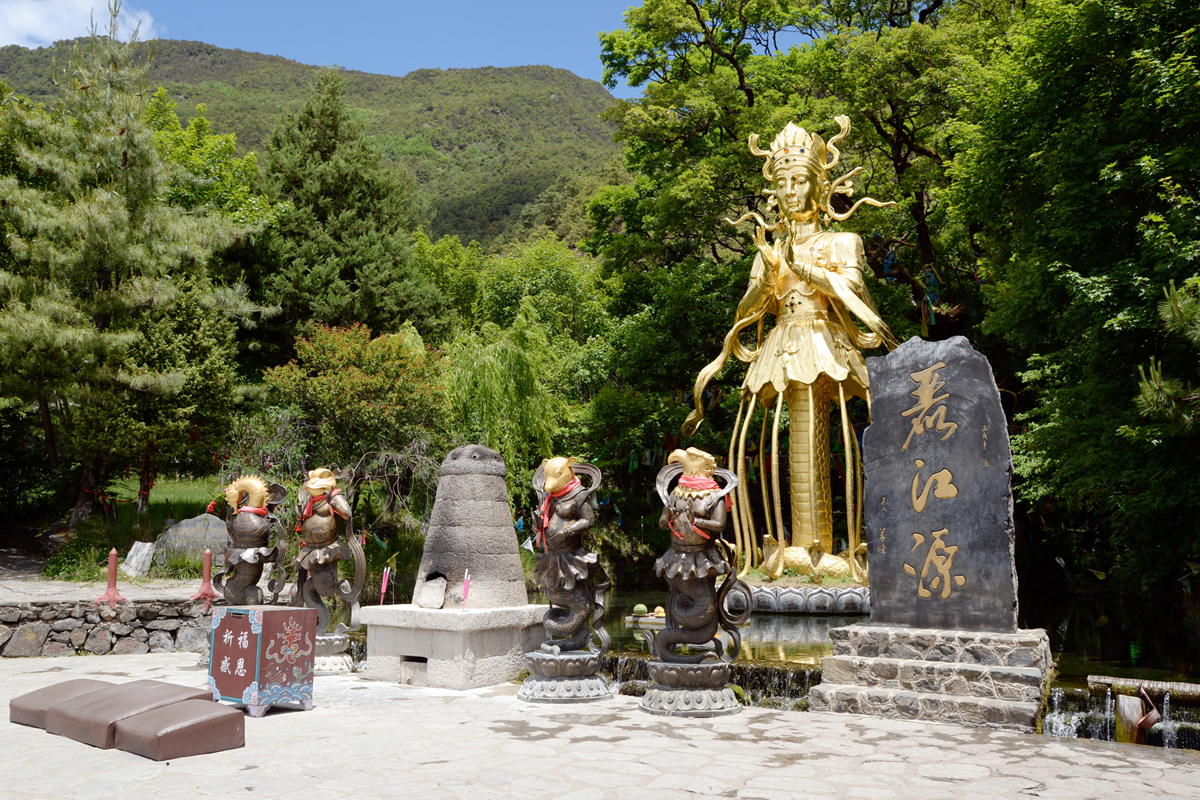 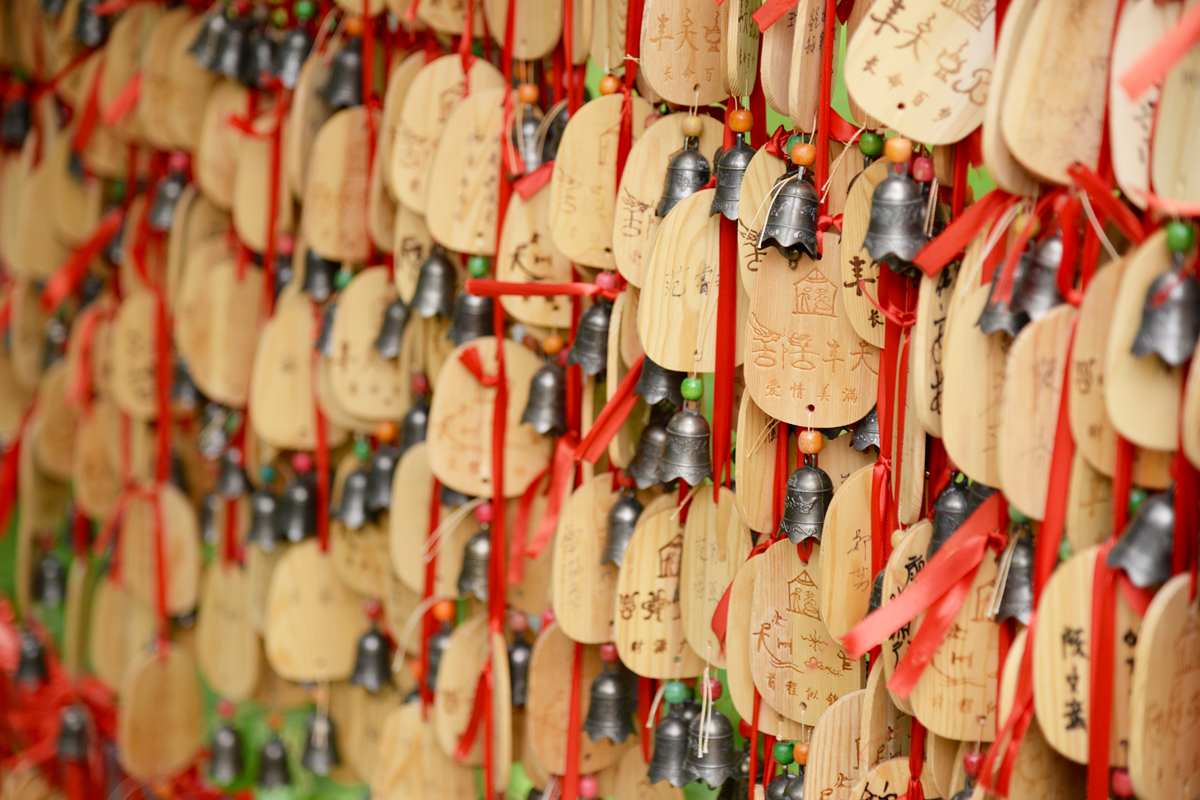 This shamanistic religion is concerned about the connection between the world of the humans and the natural world. These two worlds therefore live in a harmonious relationship. The "Dongba» is a shaman. The word actually means «wise man». He faciliates the connection between humans and nature. In a way he is a priest, who are invited to perform rituals as weddings and funerals. Before the Dongba culture was established the Naxi people of Lijiang followed the religion of sorcery. It was during the Tang Dynasty (618 – 907) and Song (960-1279) that other cultures and religions were introduced. It was the Tibetan Bon religion and Buddhism that influenced the native religion of the Naxi and led to a new religion - the Dongba. 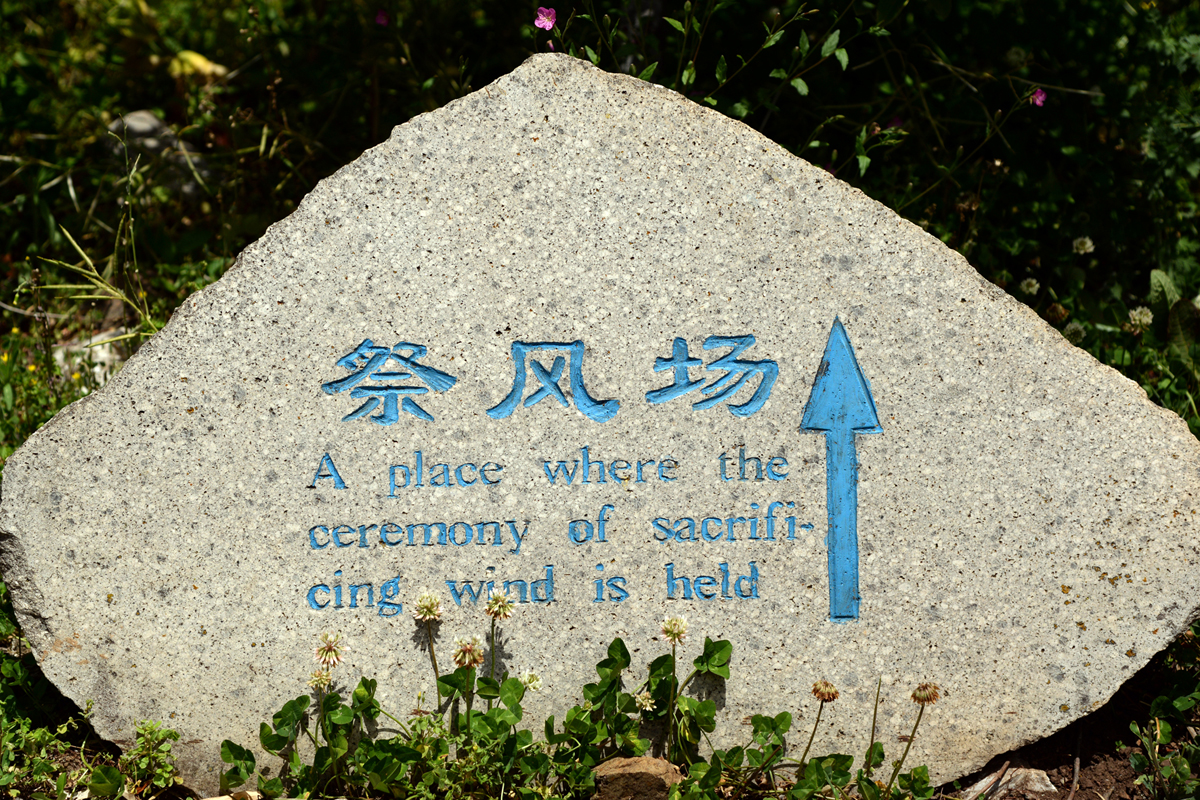 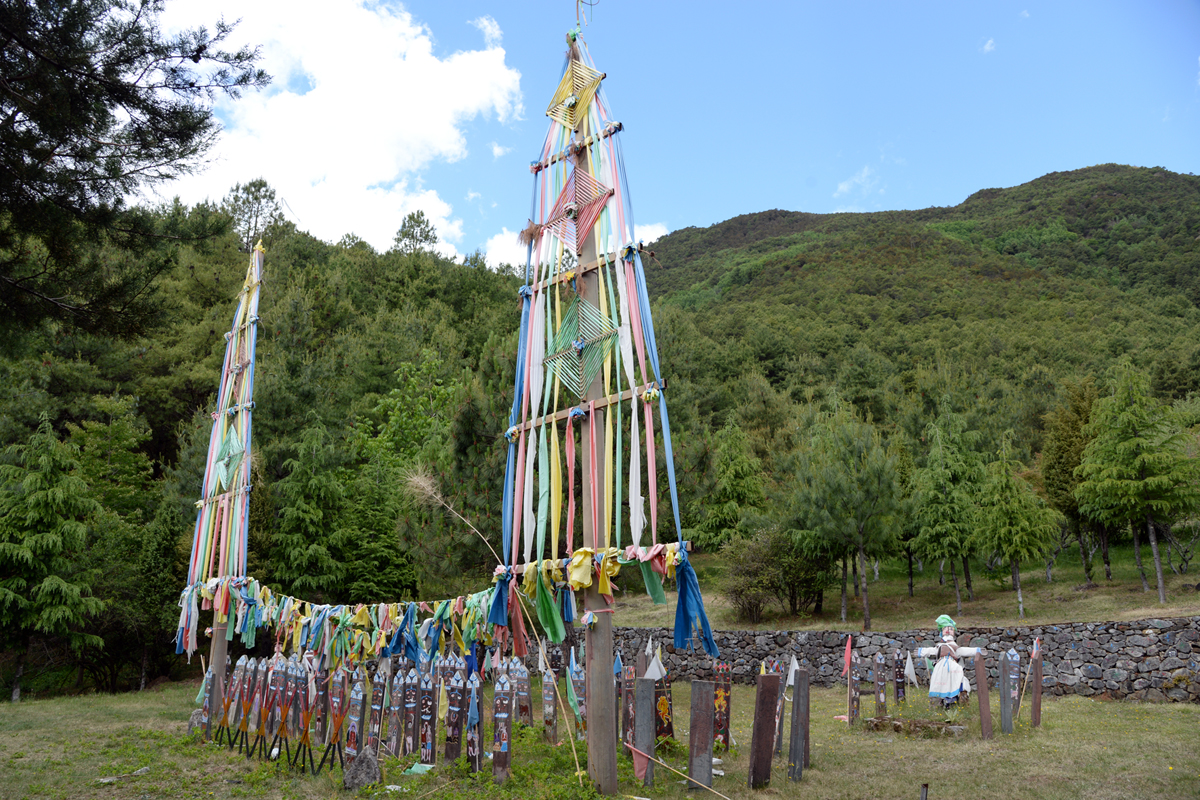 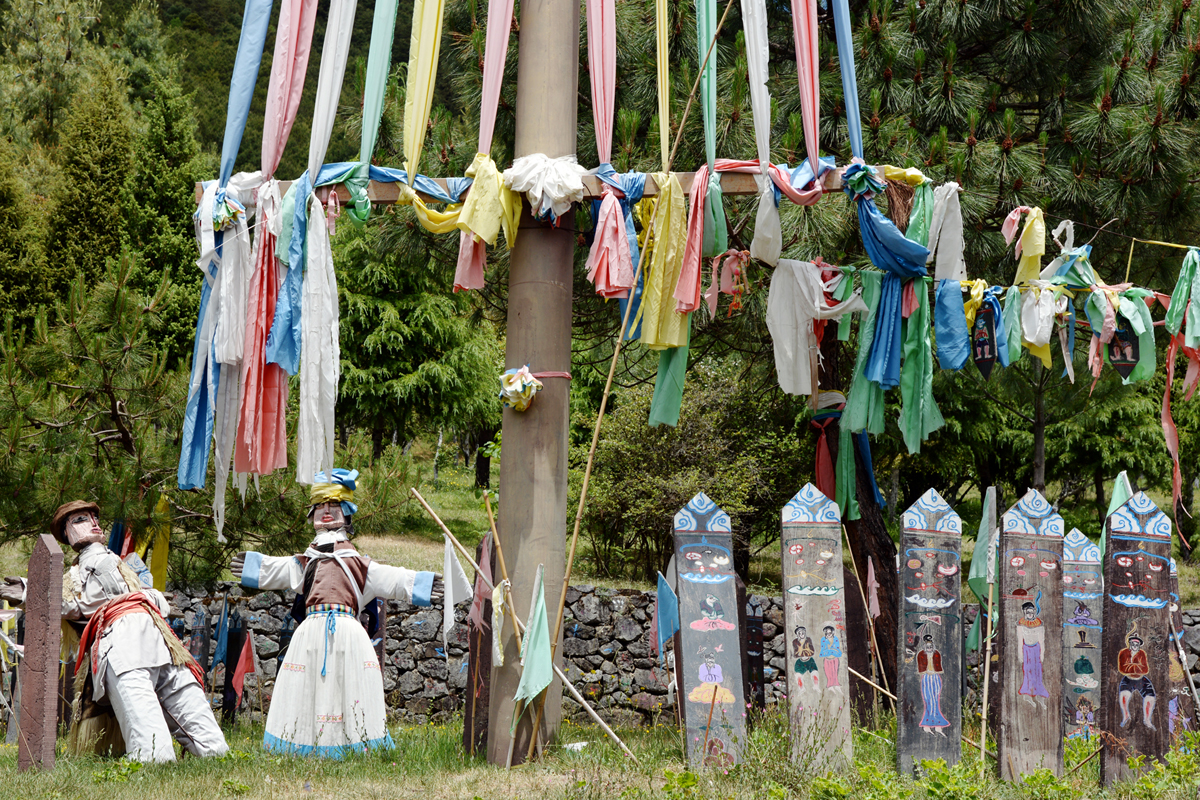 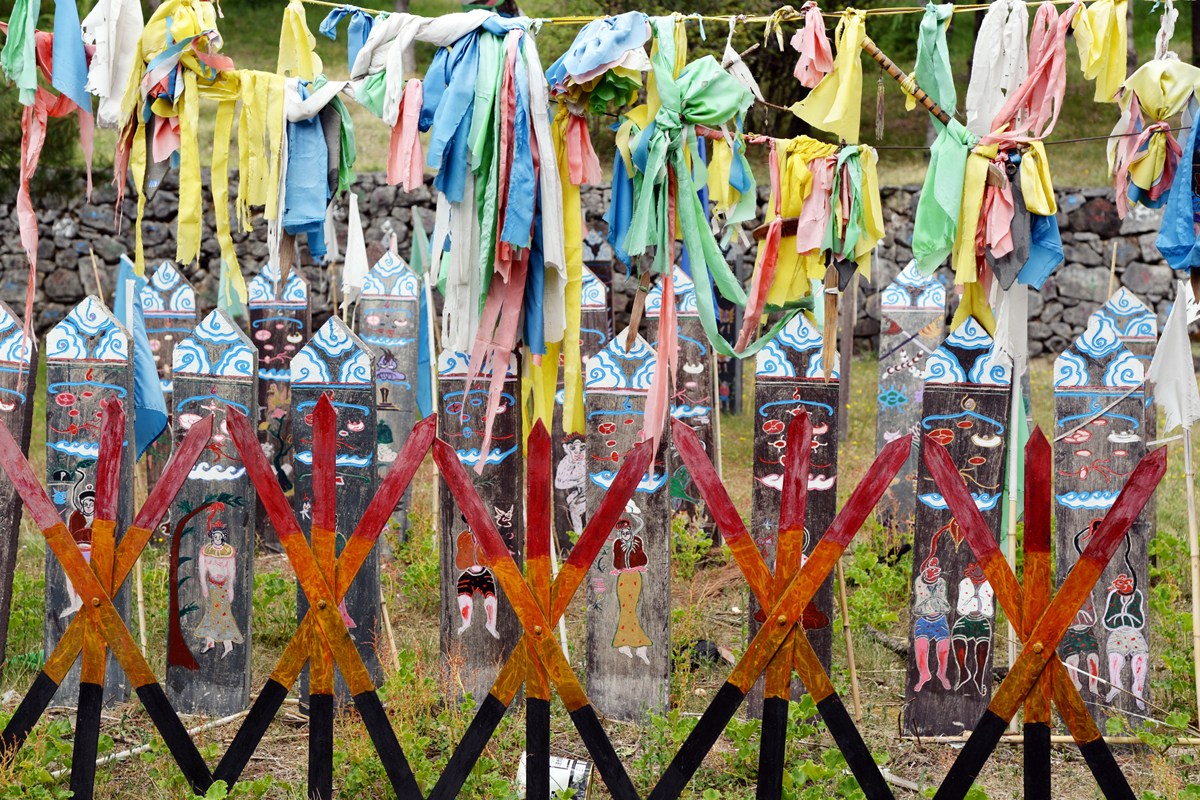 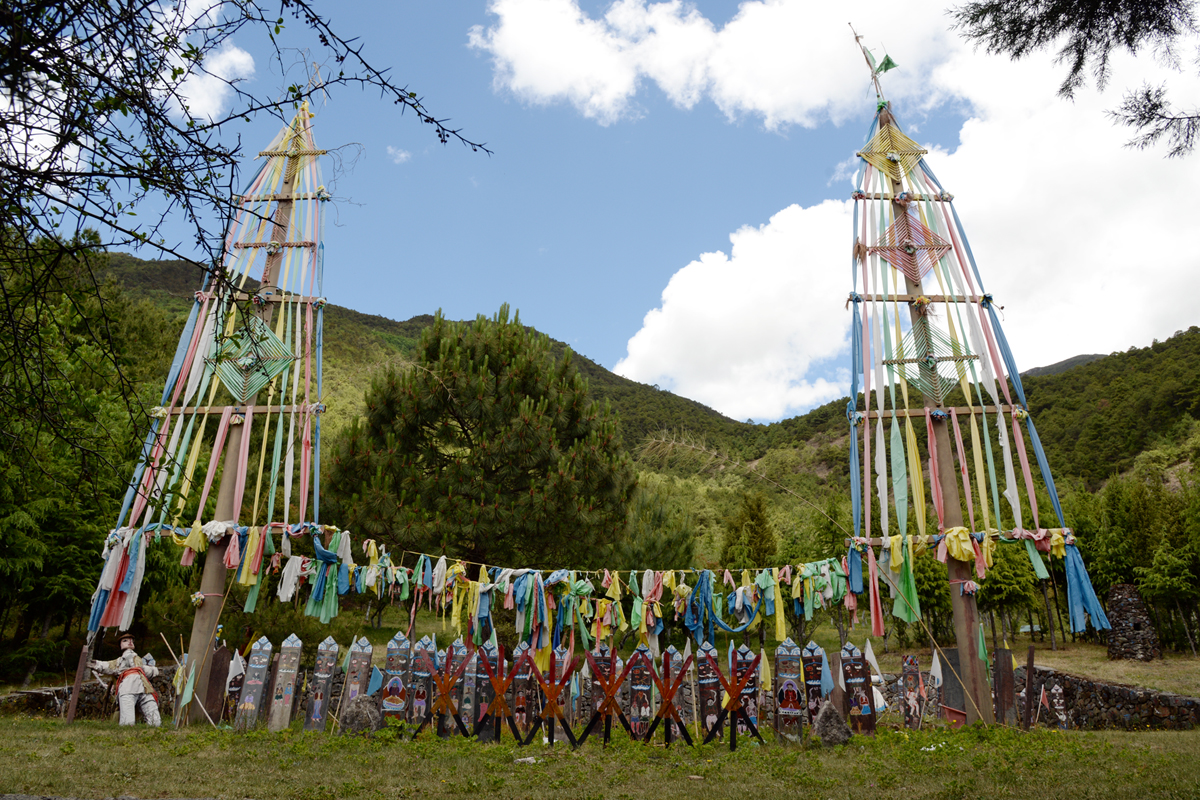 While walking around we did get quite good knowledge about the Naxi culture. It's a large village with many traditional houses, in addition to temples and an ancient place of where people used to offer sacrifices to the wind. To the Naxi people the power that is found in the wind is infinite. But my sister in law (one of my travel companions) could tell that she had read that once humans were sacrificed. When we saw the dolls and the human figures painted on the wooden sticks, we got a creepy feeling. It did feel a bit scary when we let the imagination go wild. But we cannot be sure what kind of sacrifices were performed here. The Naxi people seems to live in a close relationship with nature. They do belive in both good and bad and that good is rewarded and evil means punishment in hell. 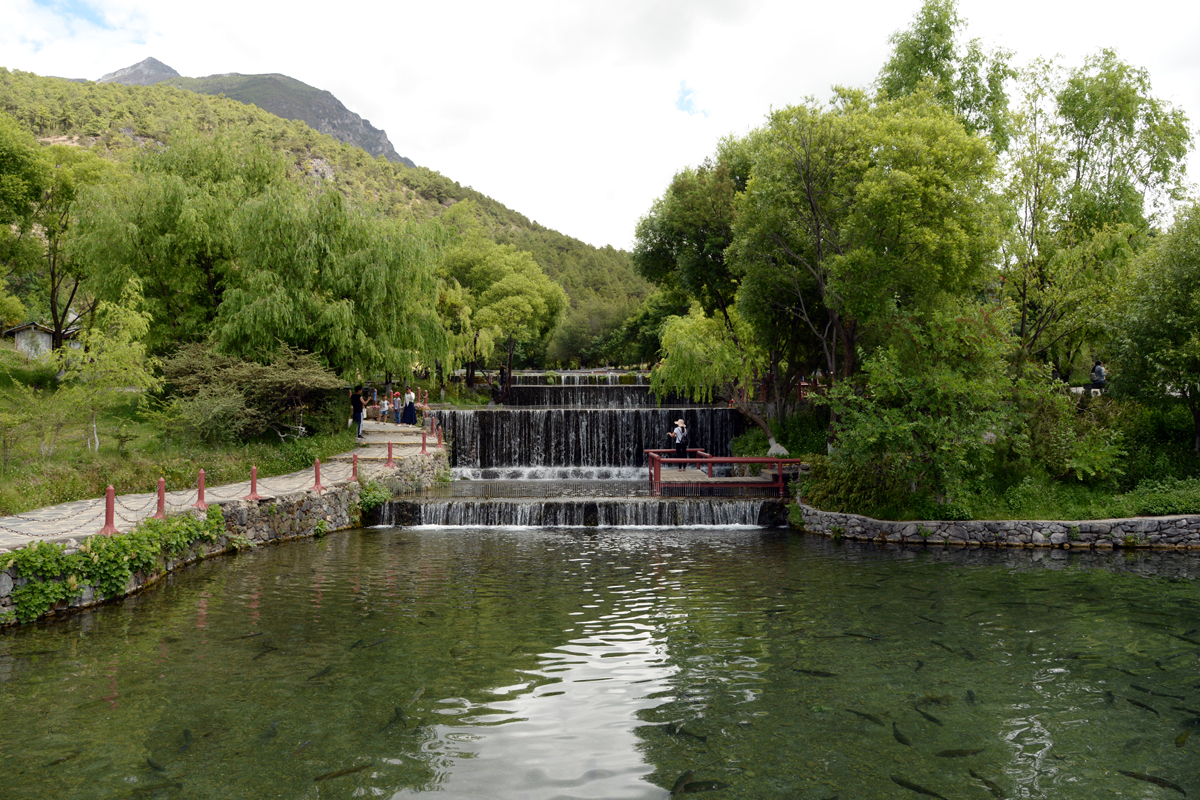 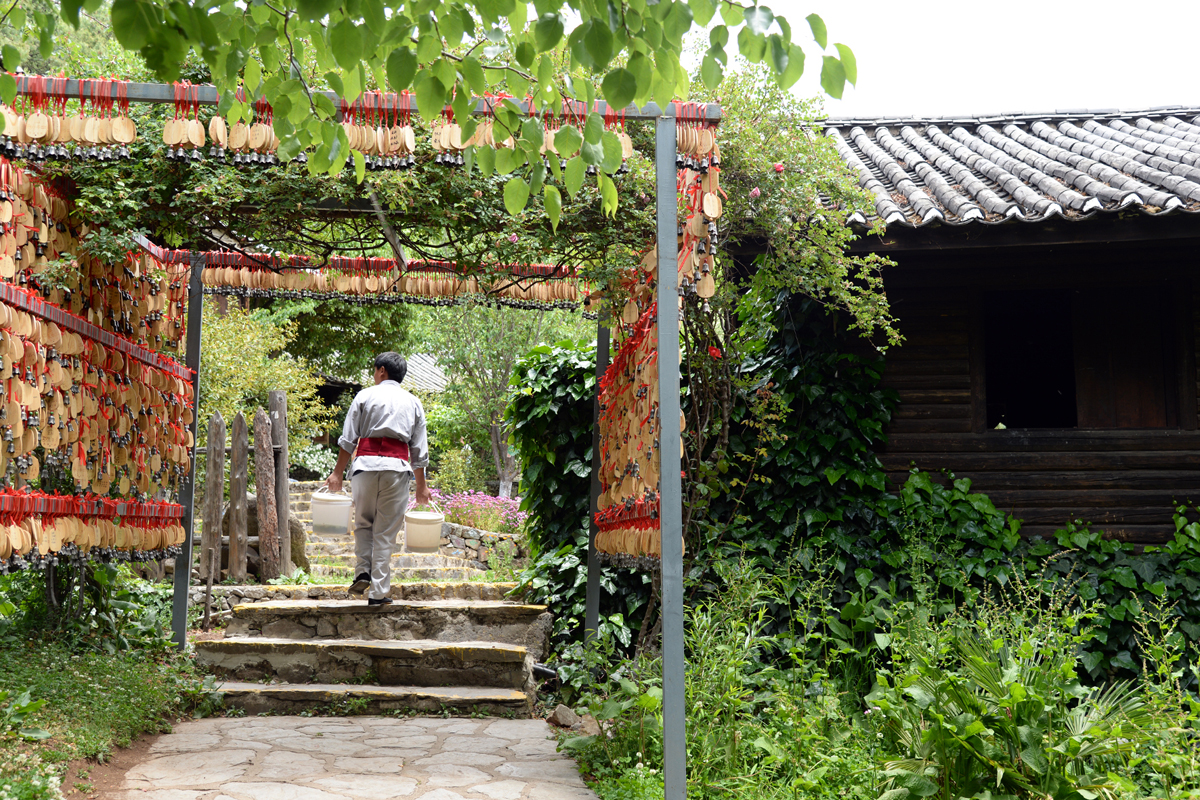 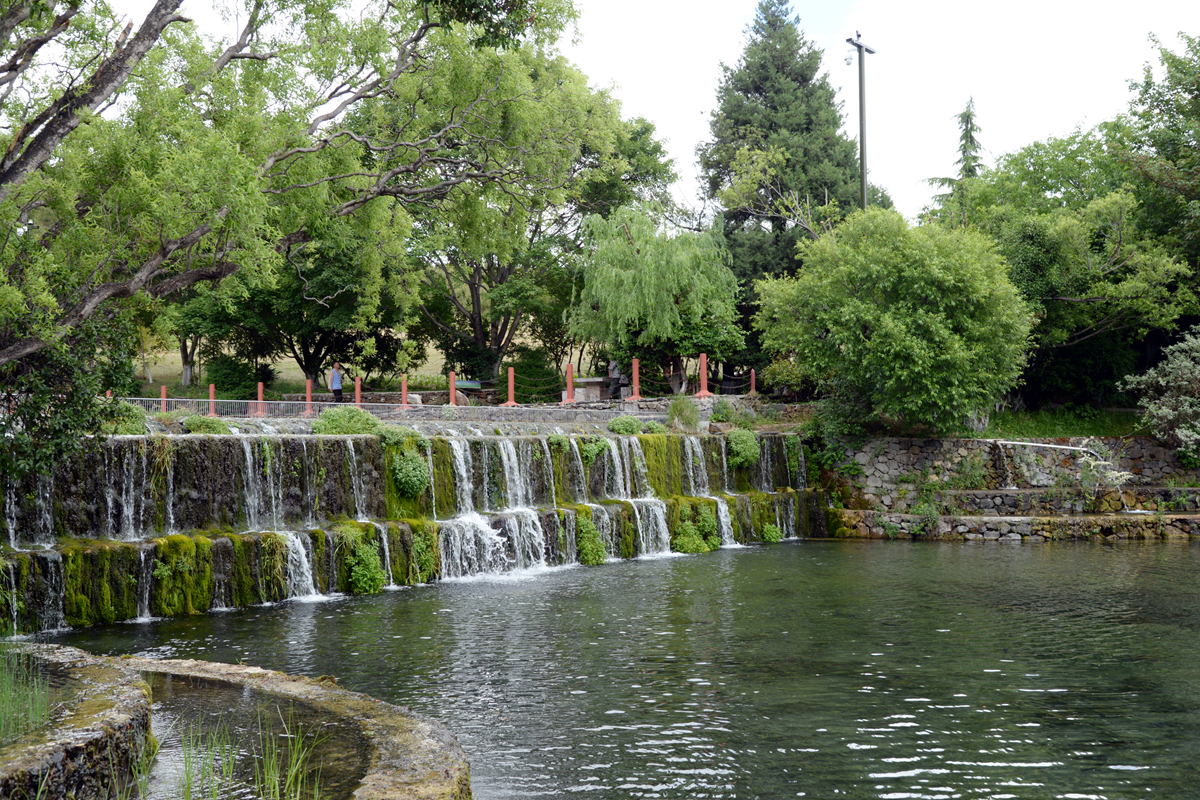 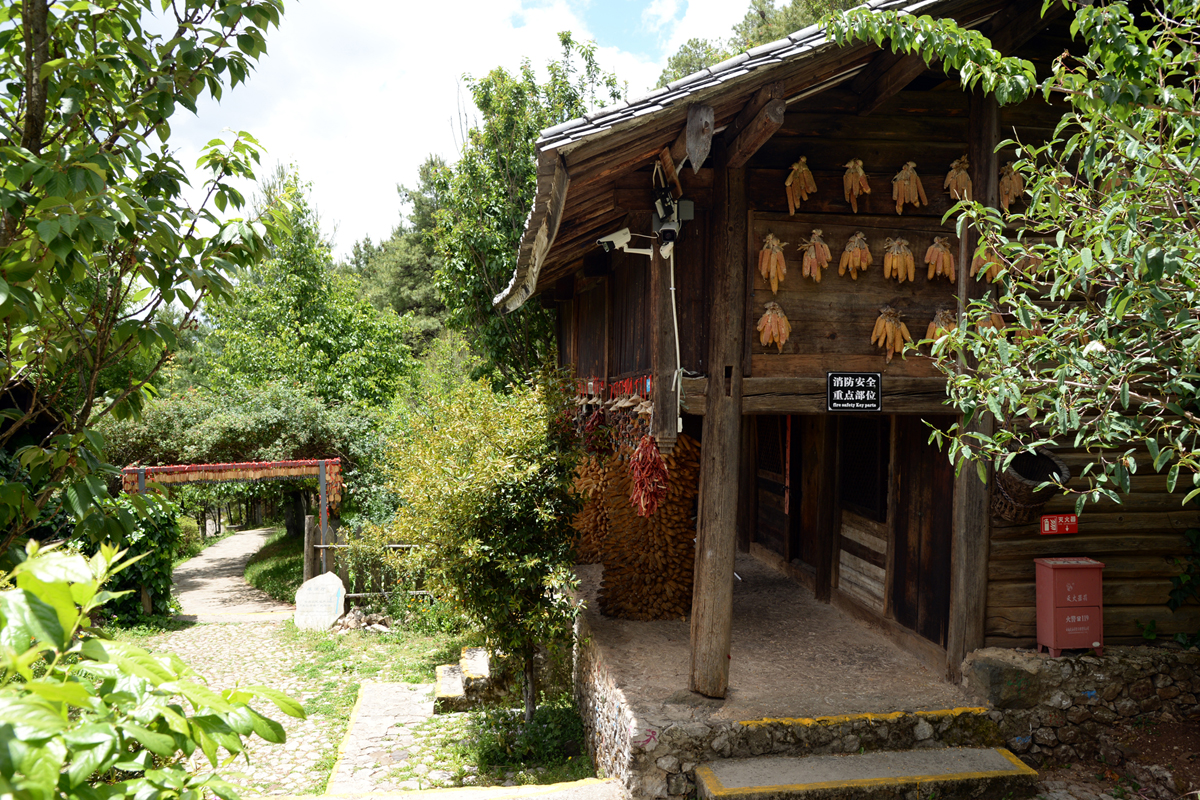 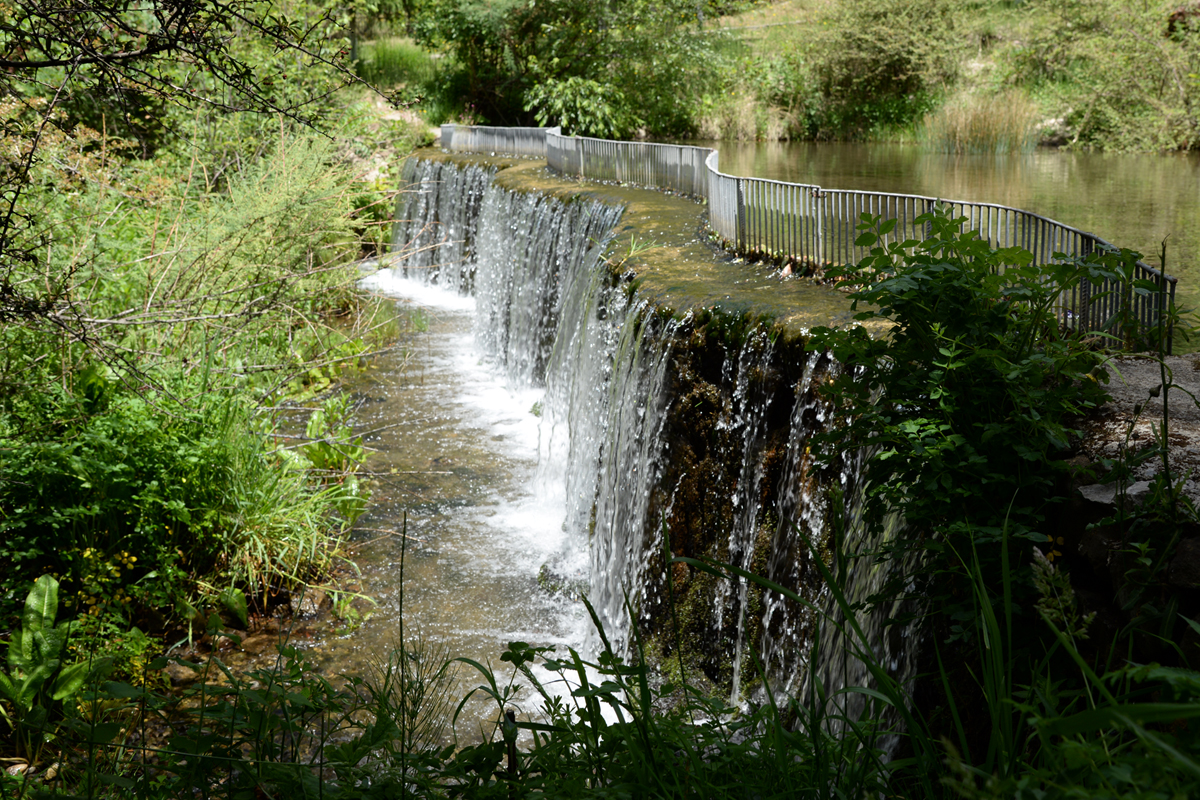 After spending time here, we took the local bus back to Lijiang, but we did manage to get off at the right places, at Shuhe and Baisha villages. The area surroudning Lijiang has many Naxi villages and temples that are easy reachable on a bicycle or with the local bus. One whole day spend exploring these villages was a day well spend. Sources:
Written information in the village.
https://china-underground.com/2017/05/07/jade-water-village/

Latest travel stories, check out :
Mauritius - The home of the lighthouse keeper at Albion Lighthouse

I love the views, they are so peaceful and calm. Greetings from the Philippines!

Thanks. It is a beautiful place and you do feel it's peaceful and quiet. Close to nature, actually.

Man, you were really out there in China! Fantastic shots; it looks so peaceful there. Living in harmony with nature, indeed!

Best wishes for Happiness, Health, and Prosperity in 2022!

Thanks :) Oh yes, this is a place where you are able to feel the peace. And no cars in the village. You walk!

I really liked your explanation about local Naxi culture and the differences. Thanks for sharing this 😀

There is so much we learned while there. The area has so many charming villages.

Thanks a lot for the support :)

Thank you for taking us along on this wonderful trip. Great photos and I enjoyed reading all about it. 😊

Thanks. It was quite an interesting place, in addition of beeing a peaceful. Made us feel close to nature.

You are welcome 😊
I can imagine…

What a fantastic place. Great article and photos! 😎

Thanks :) and this only one village...there are many and all are so charming in their own way.

Congratulations @digi-me! You have completed the following achievement on the Hive blockchain and have been rewarded with new badge(s):

I’m discovering so many new places and stories in this community. Thank you for sharing😊

You are wellcome. Our planet has so many different places.

Hiya, @lizanomadsoul here, just swinging by to let you know that this post made it into our Top 3 in Daily Travel Digest #1433.