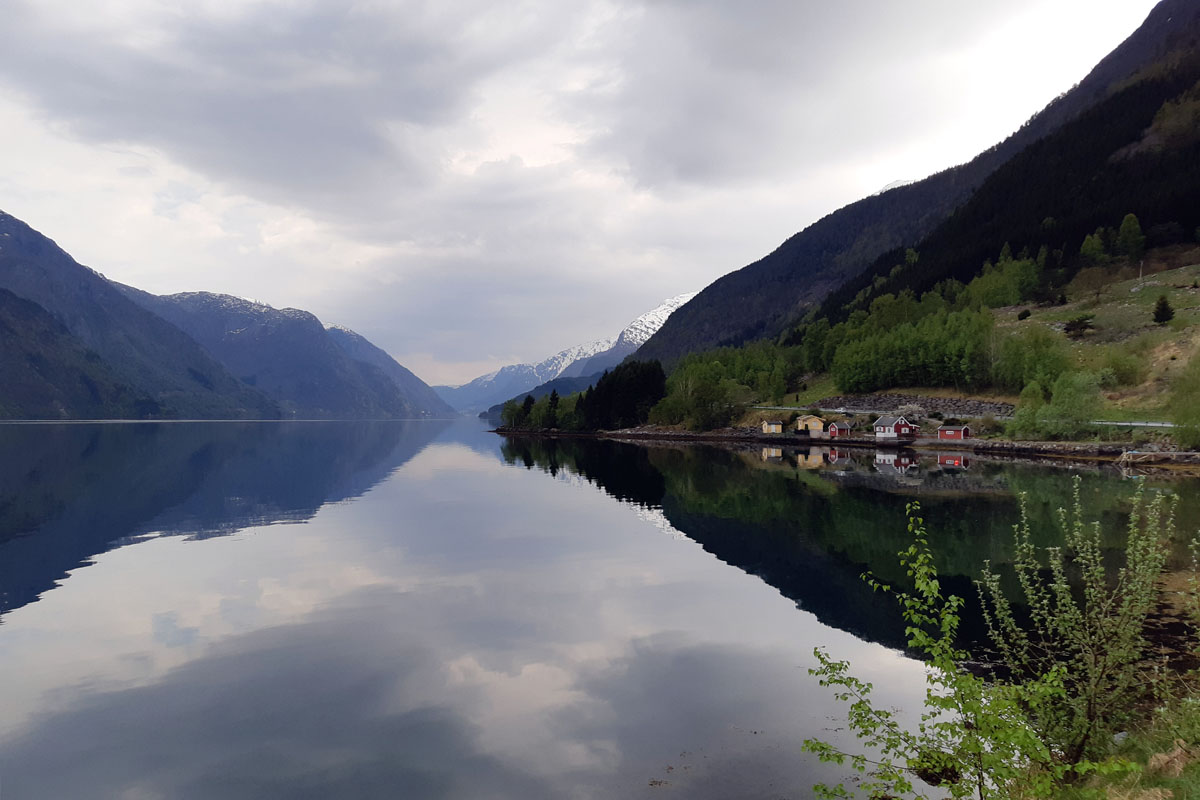 I have just returned from a one week vacation, which I chose to spend on a drive to Hardanger on the west coast of Norway. This area is known for growing fruit. To see hundred thousands of fruit trees blooming is a spectacular sight. The deep fjords are surrounded by high, snow-capped mountains, presenting a dramatic and varied landscape. That goes for the roads too. They are narrow and winds up and down mountain slopes. The speed must be adapted to a slower pace, which was actually only an advantage. That gave us time to enjoy the amazing view, even I feel we made a lot of stops. 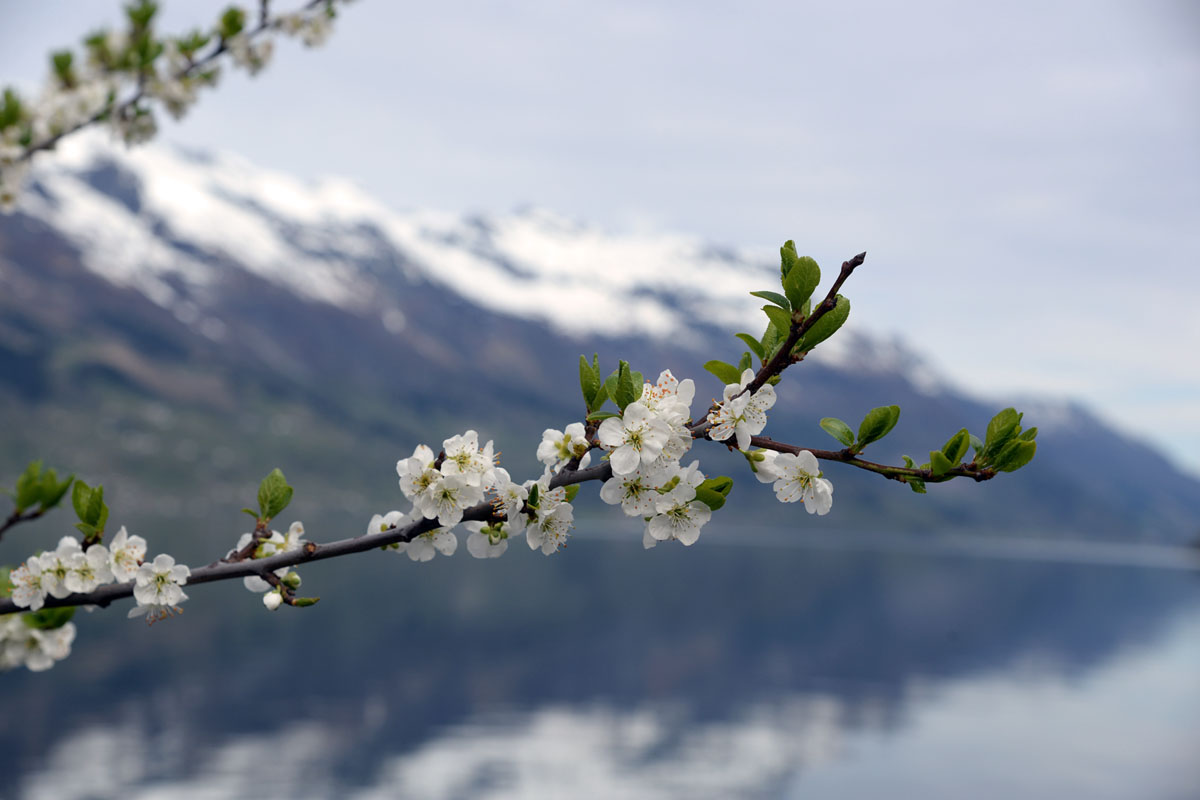 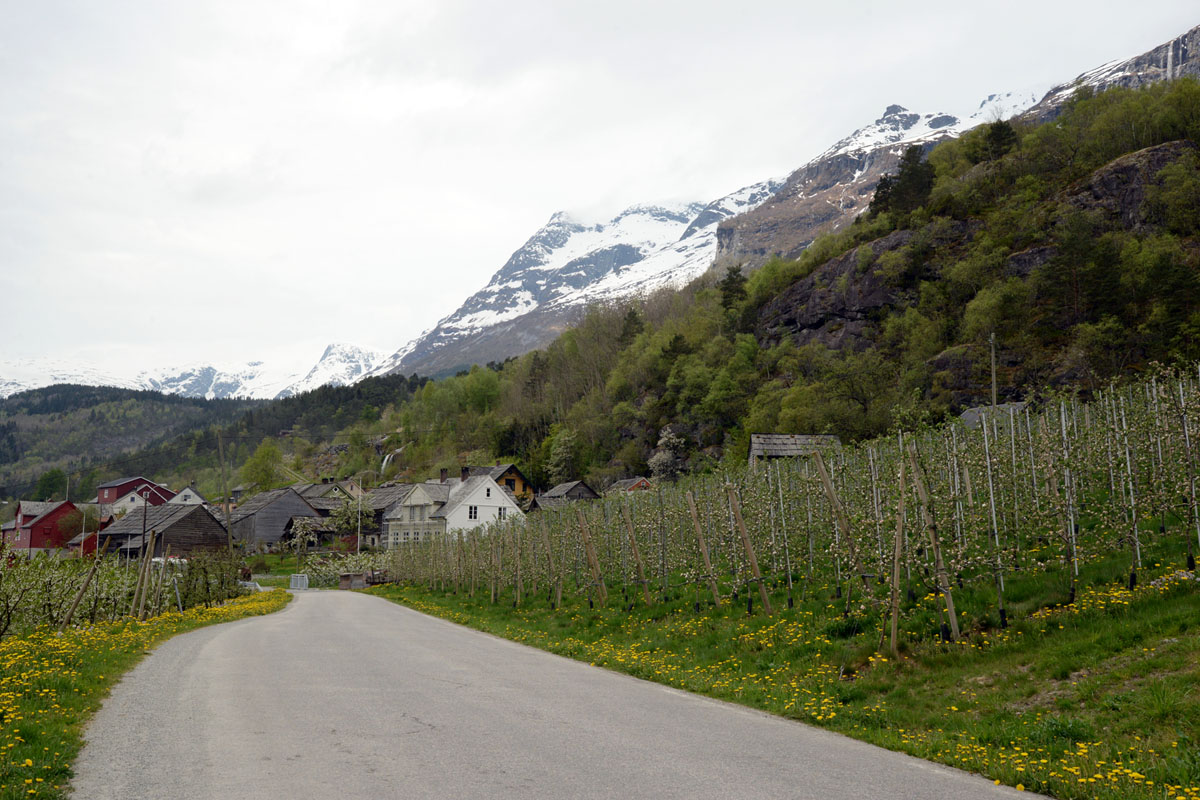 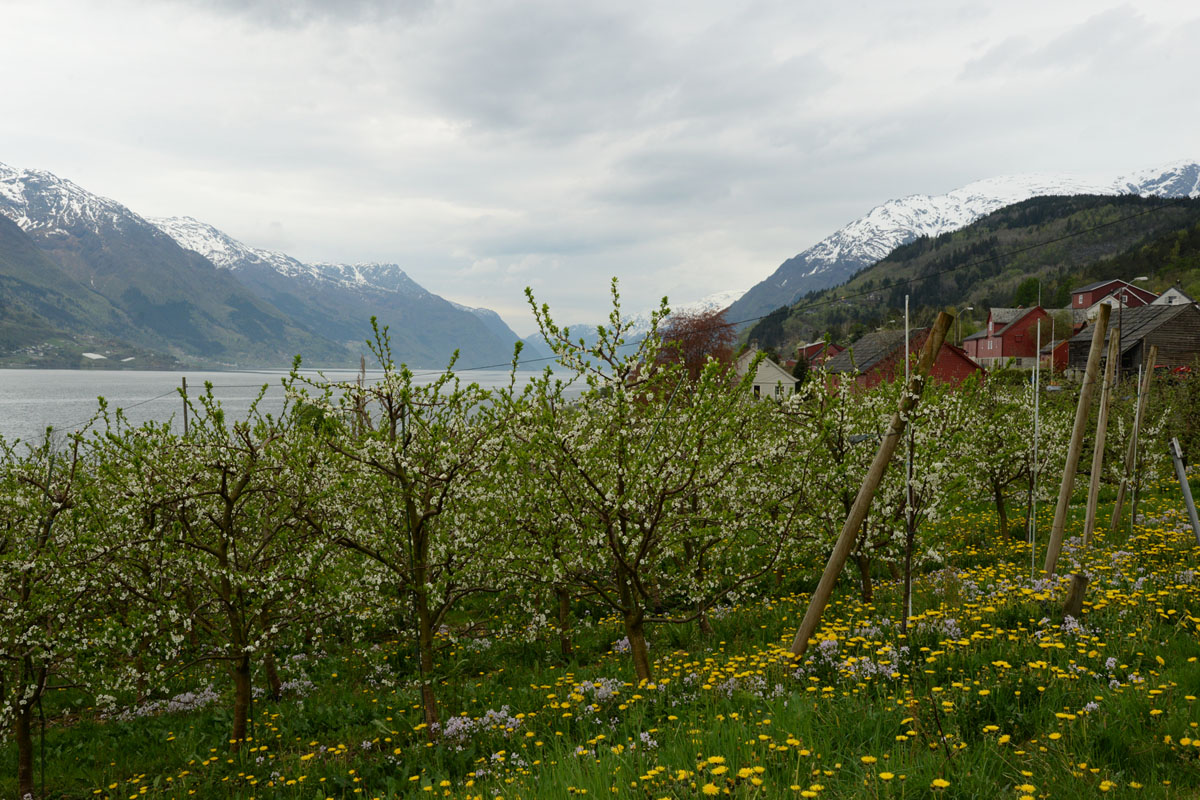 The flowering in Hardanger had just begun when we arrived on 12th of May. The receptionist told us we had arrived just in time. The time at which flowering begins may vary. It depends on how the weather is the individual spring. If it is a cold spring, it will be a little later. 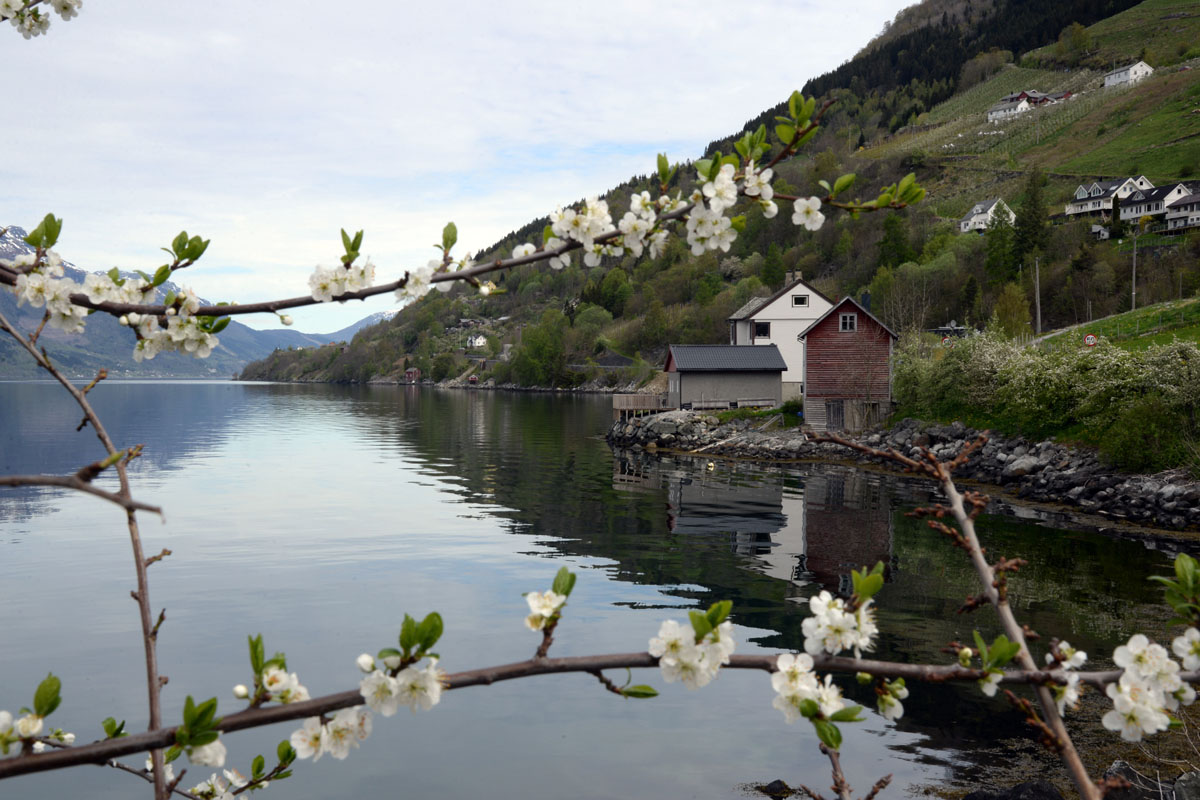 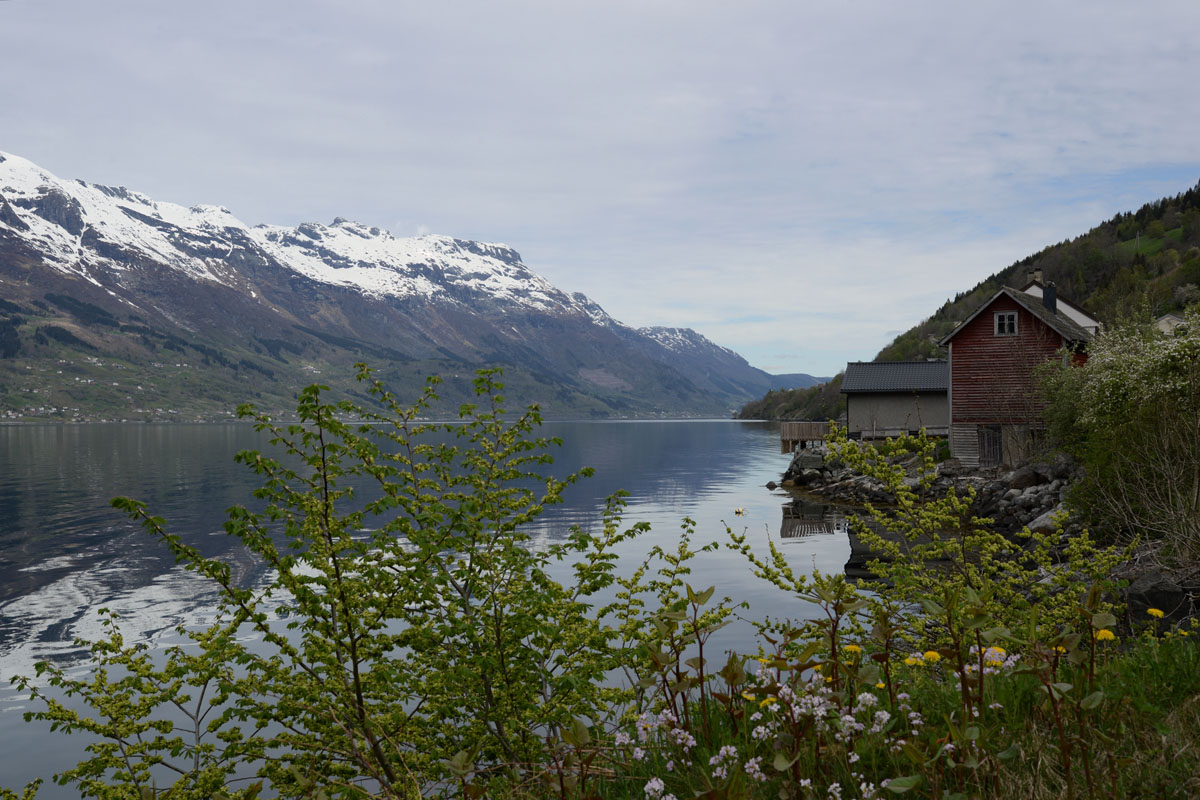 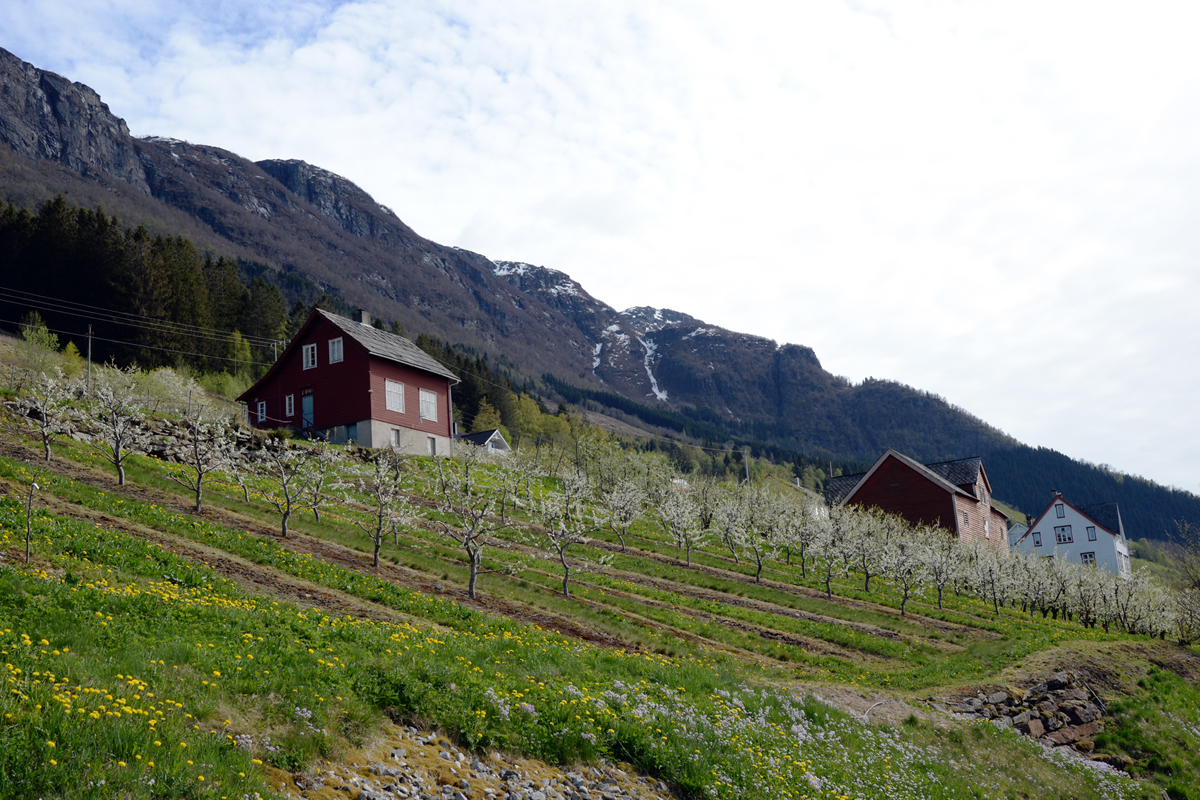 The first day we drove along Rv. 13, which is one of The Scenic Routes. The road is winding its way along the spectacular Sørfjorden. It often felt like we were driving straight through people's gardens. The road is in many places very close to farms and fields. 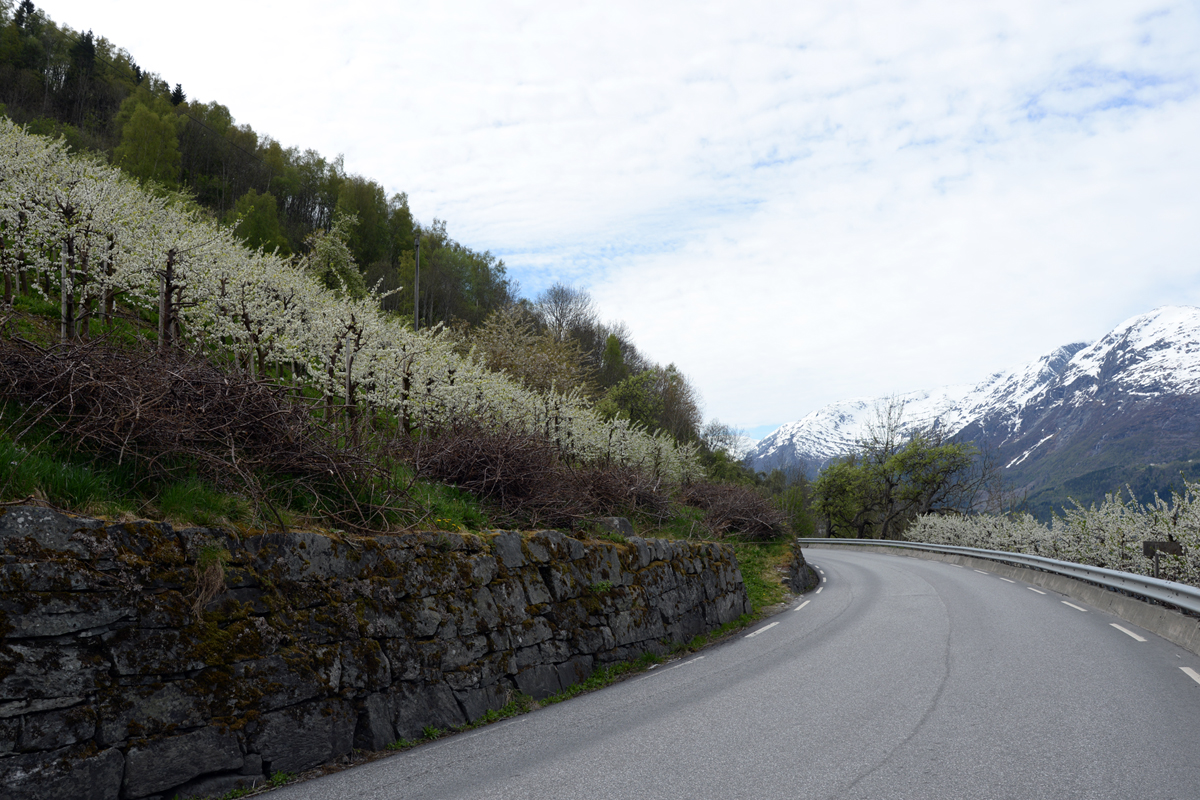 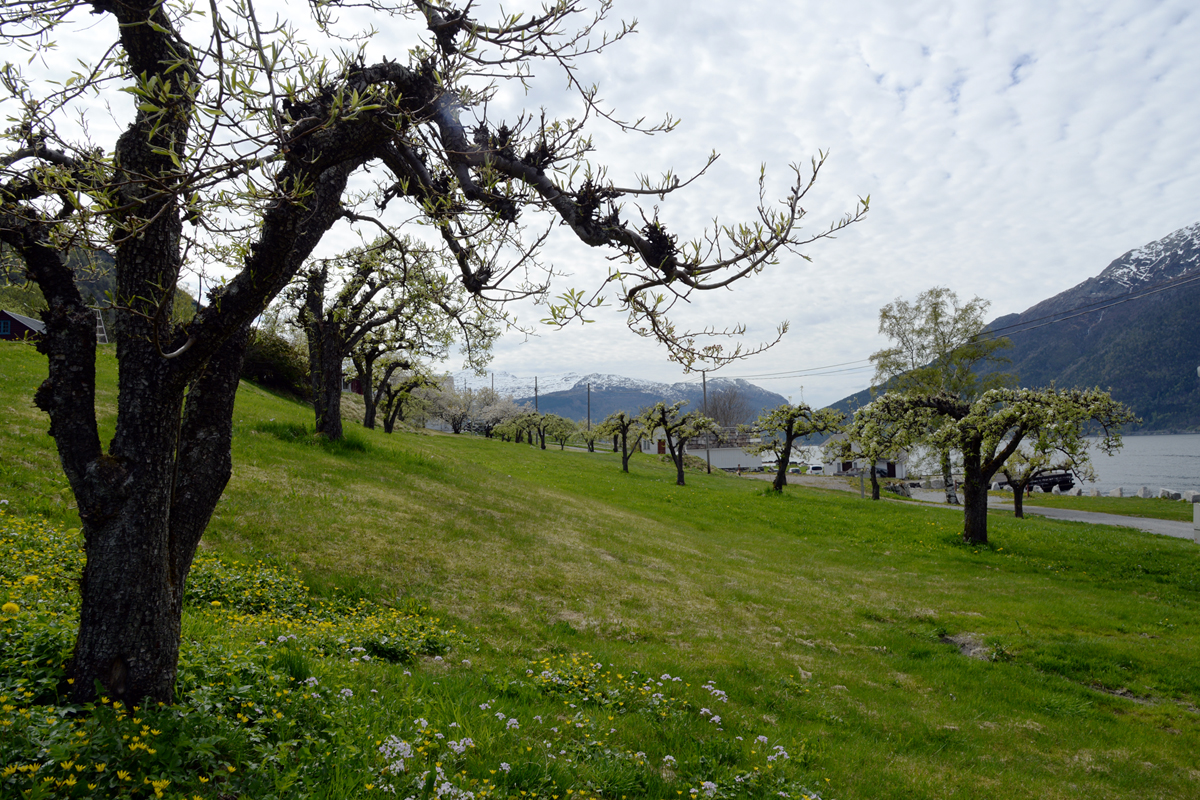 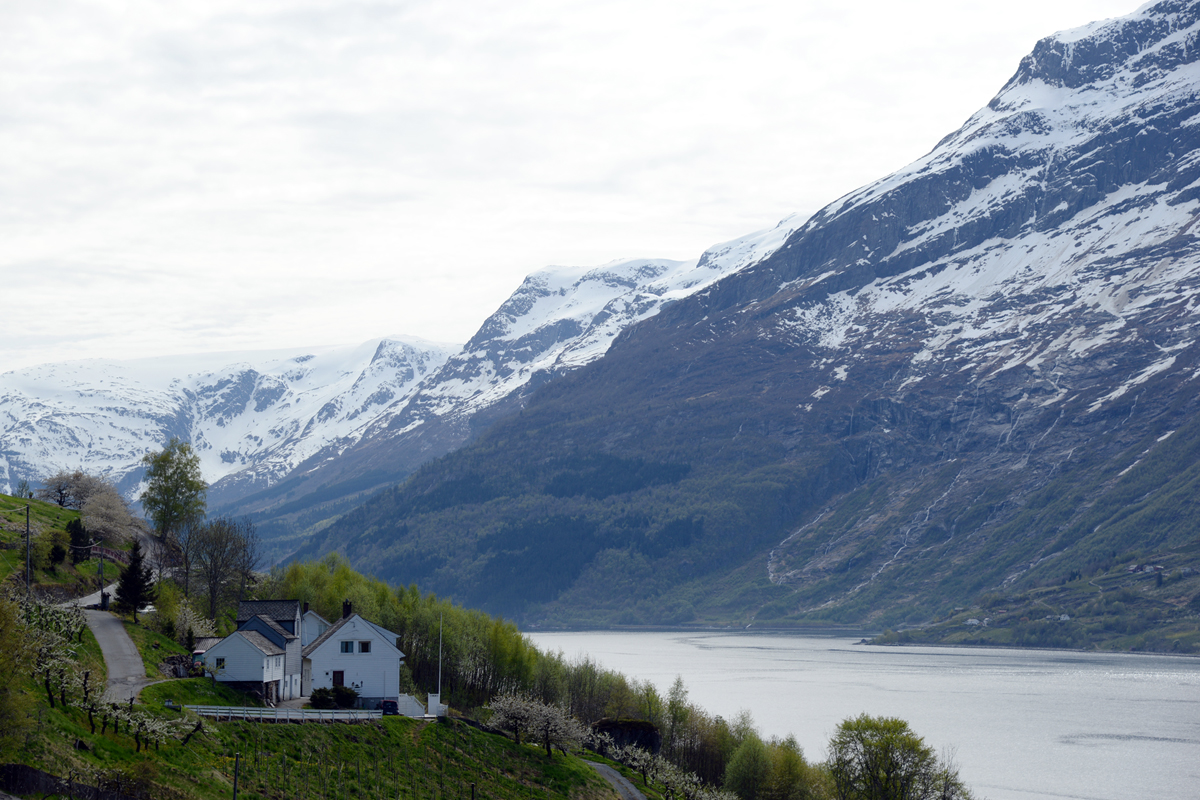 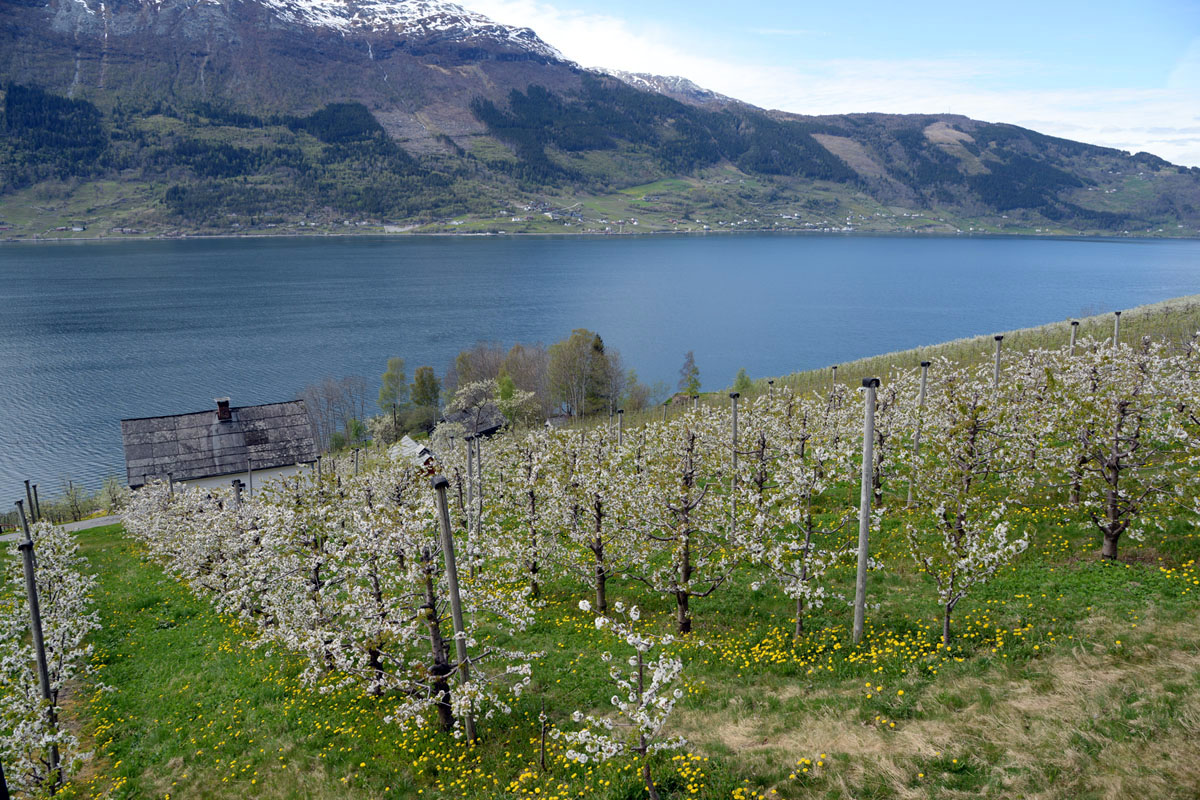 In Norway we have what is called «Nasjonale Turistveier», which means «The Scenic Routes». These 18 routes have been selected due to the fact that they go through some of Norway's most magnificent scenic areas. Not all of these routes are completely finished with picnic areas and viewpoints etc. The plan is that they shall all be completed by 2023. Together, they will cover 2,000 kilometers of road. 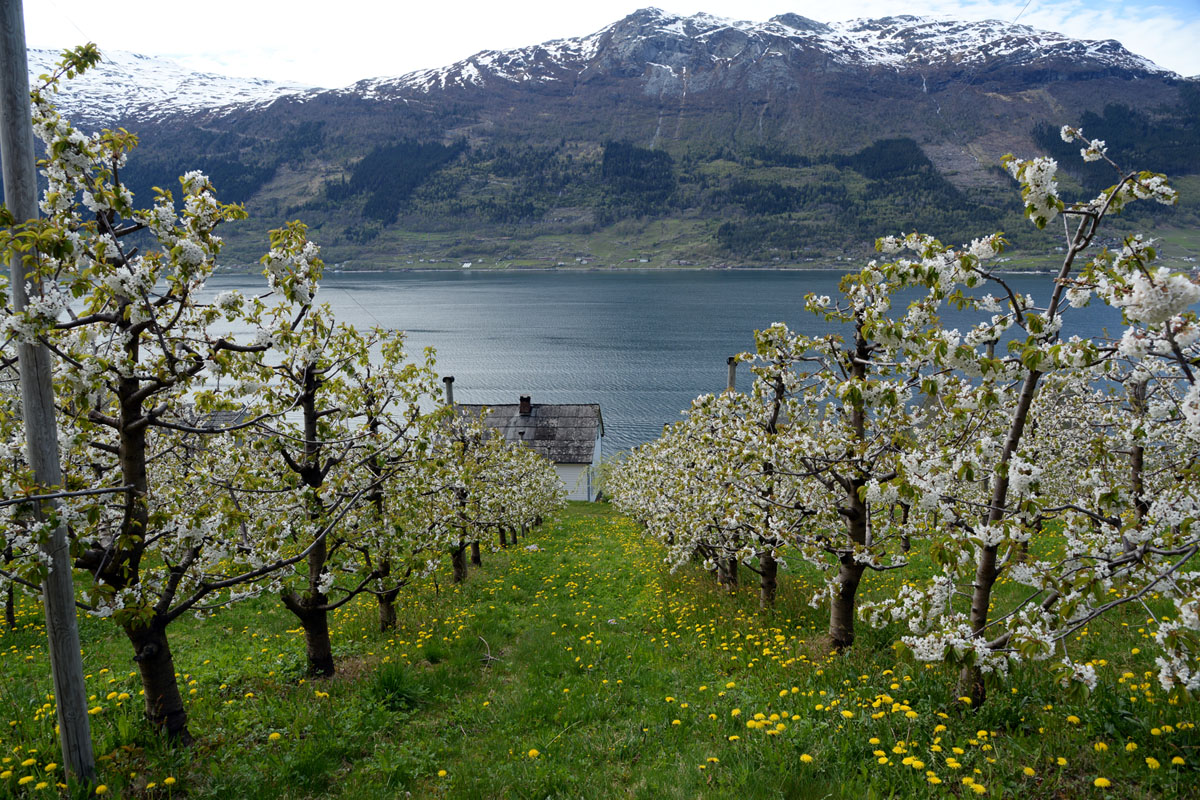 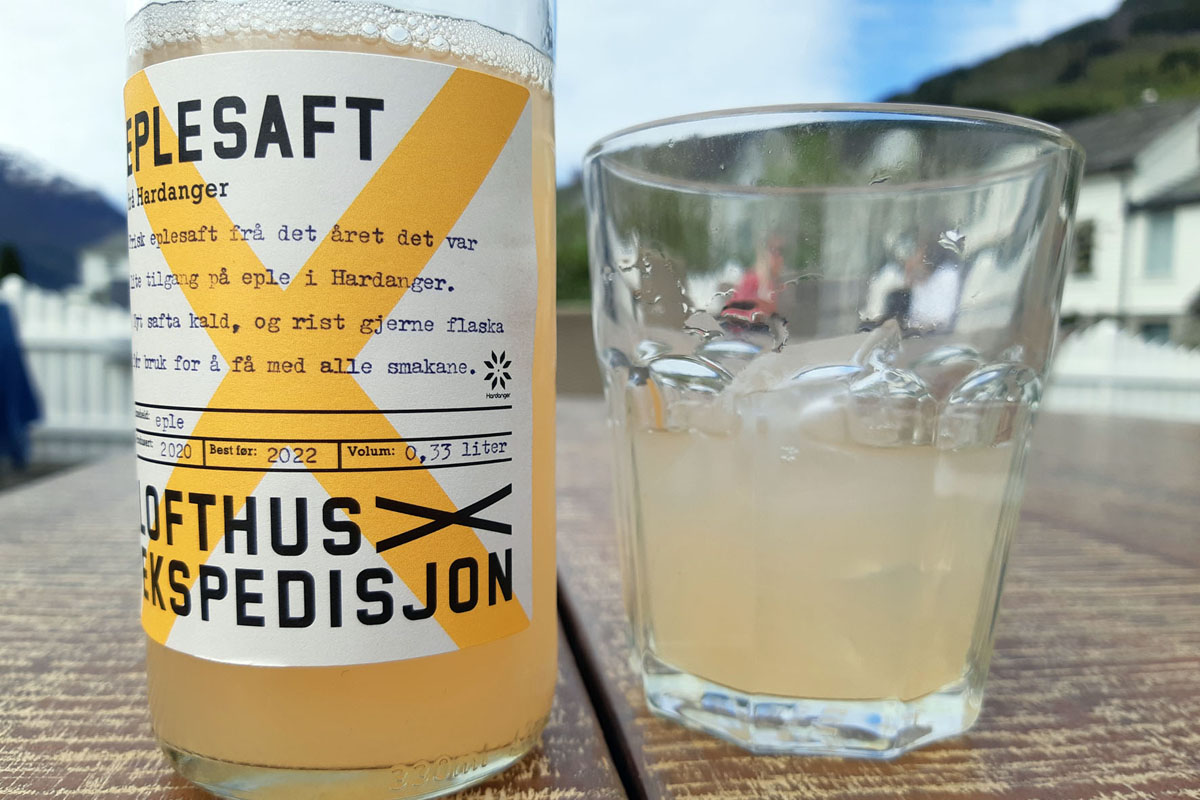 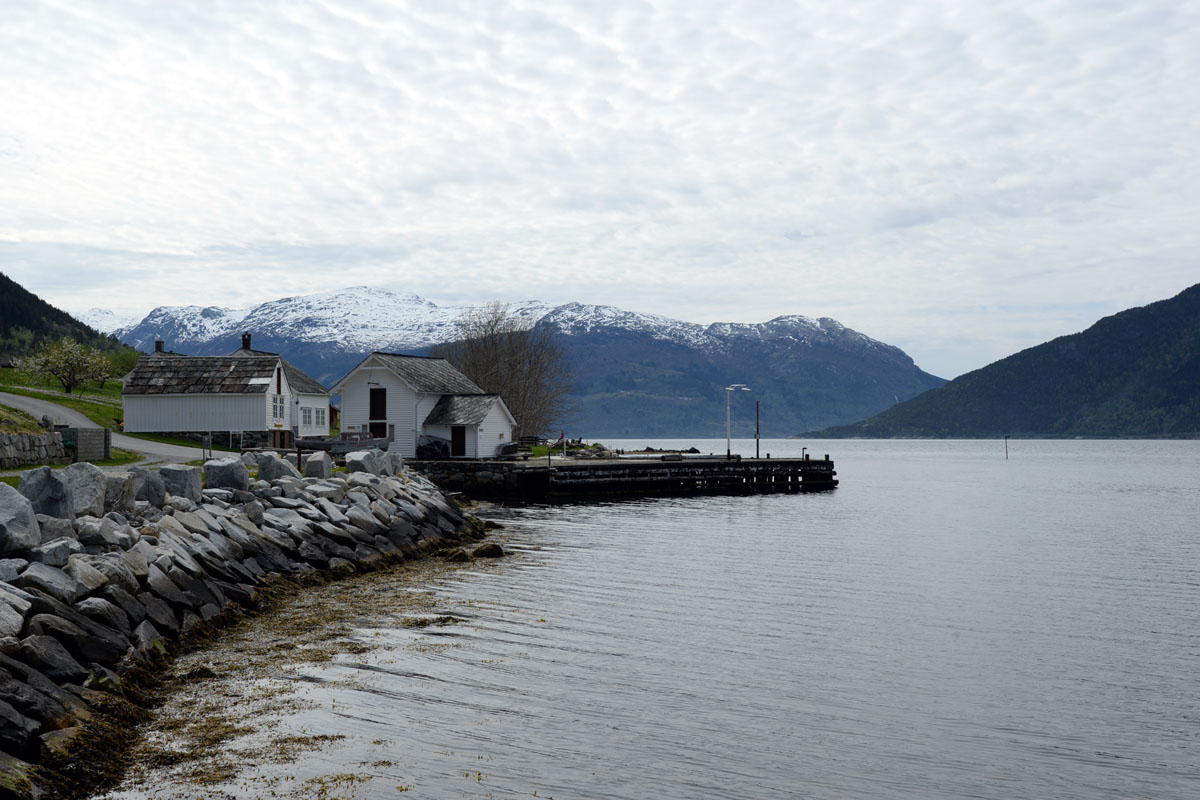 In Hardanger, fruit has been grown since the 14th century and this is probably what has formed the largest basis for life and it still does. You can taste apple juice and participate in tastings on organized trips. In the summer there is a "cider boat" that stops at different farms, and you can then taste the farmer's products. We were here too early. The boat had not started yet. Along the road there were farmers selling their products, so we did get the chance to taste the famous apple juice from Hardanger. 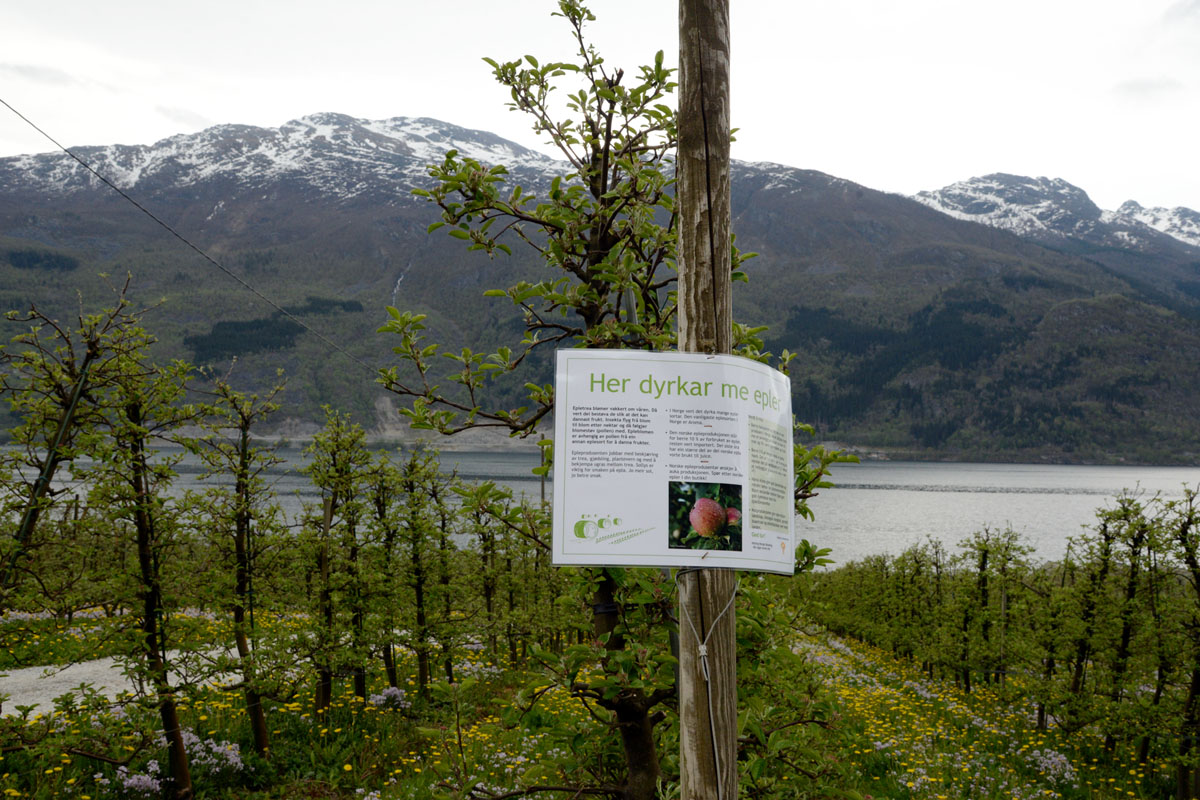 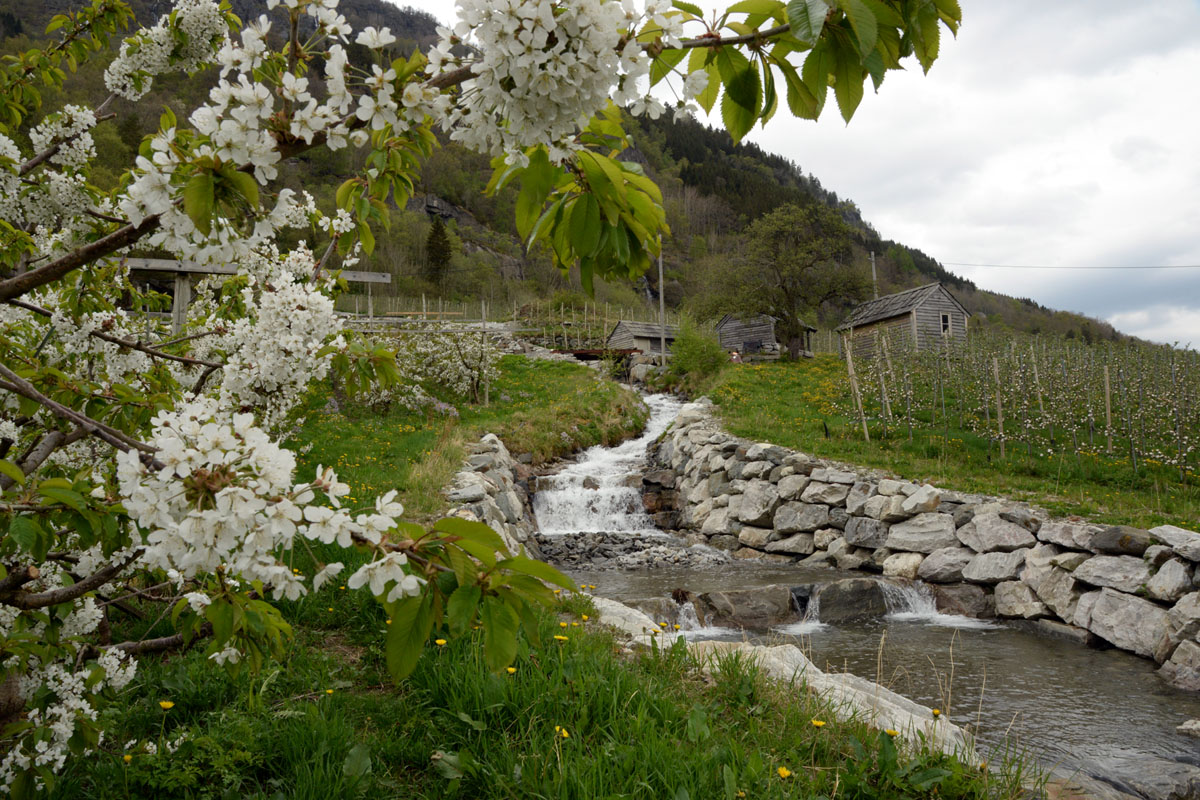 The next day we drove along the opposite side of Sørfjorden. This road is not one of the Scenic Routes, but it offers equally high mountains and thousands of fruit trees. In addition, there are a number of historic sites along the way. Our first stop was in Aga. 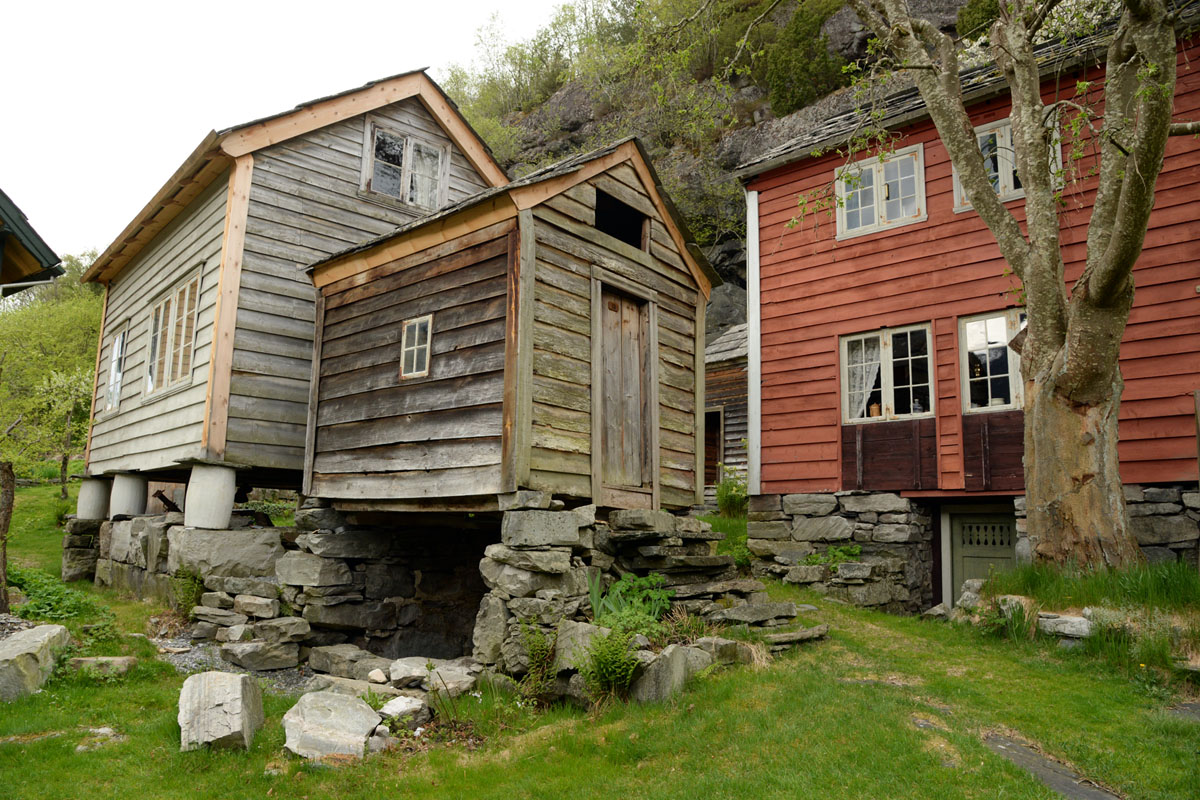 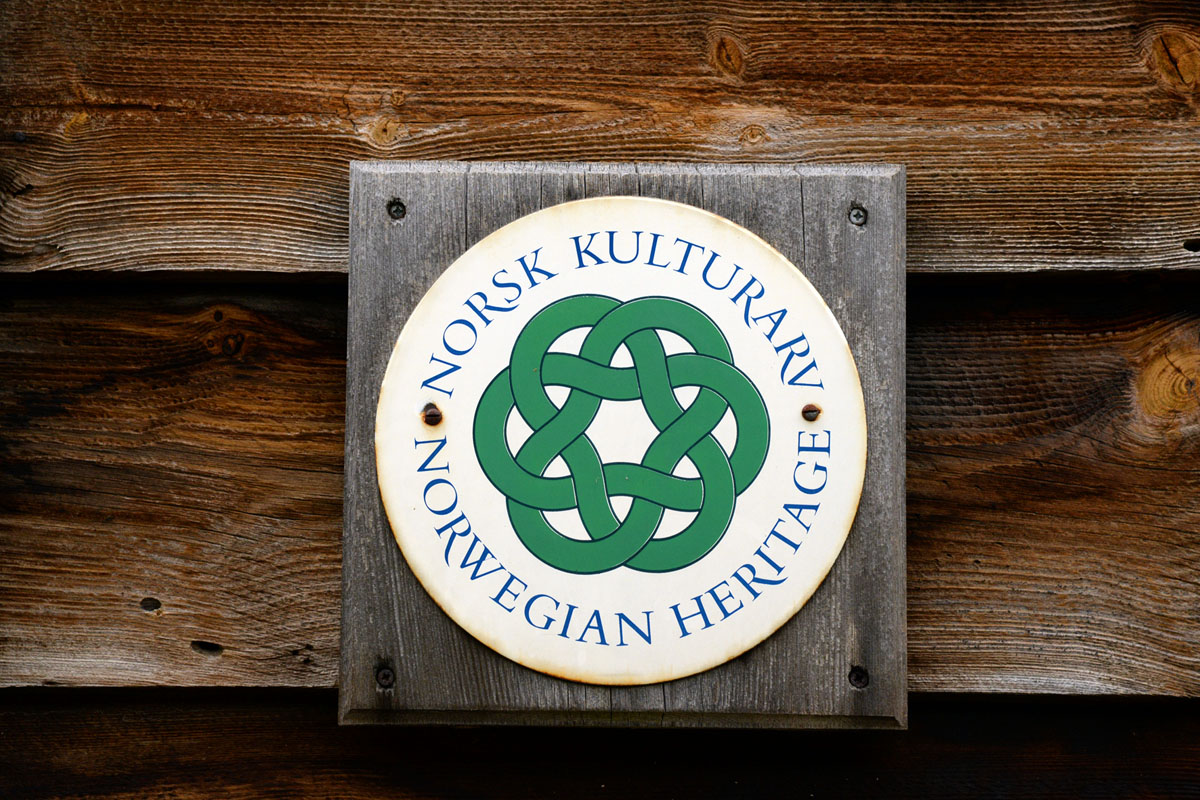 Aga is a small place. In addistion to a few farmers growing fruit, we made a stop to visit one of the few surviving cluster hamlets in Norway. It can be dated back to around 1300. In addition, acheological excavations proves that there has been settlements dating back to the Stone Age. The houses we see here today, are considerably younger though. 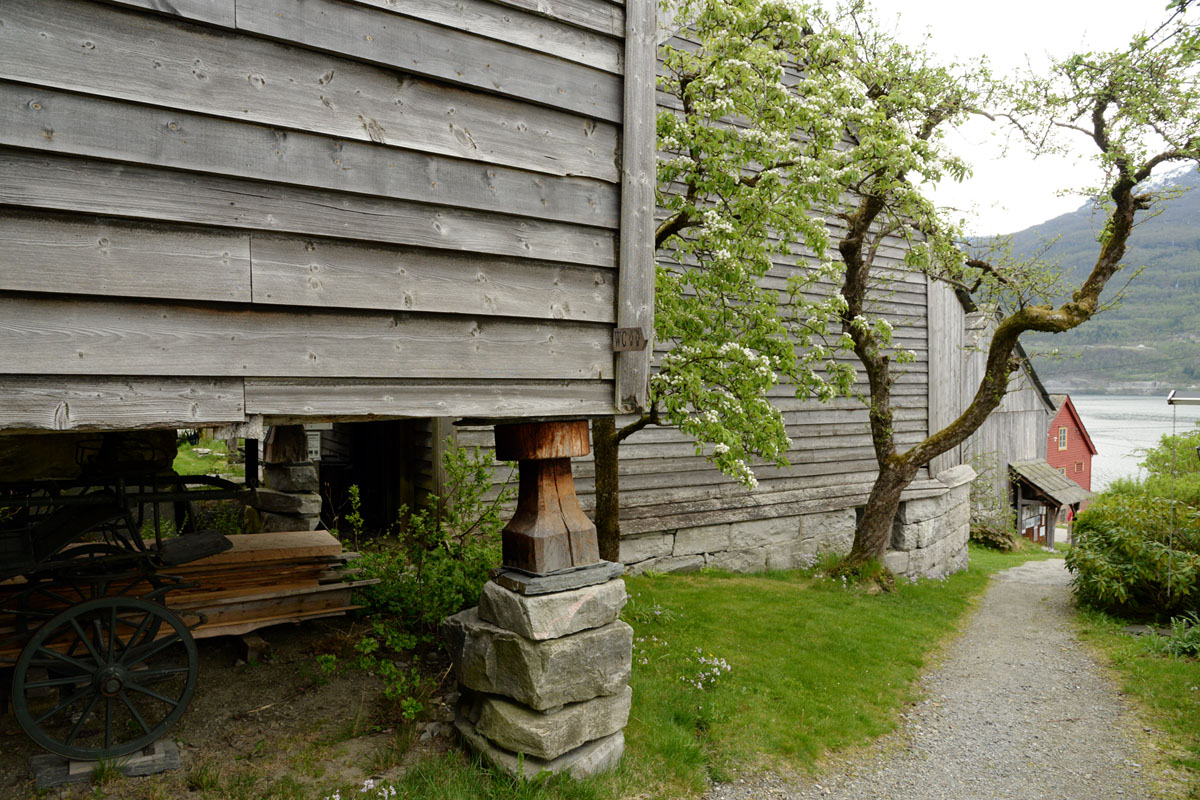 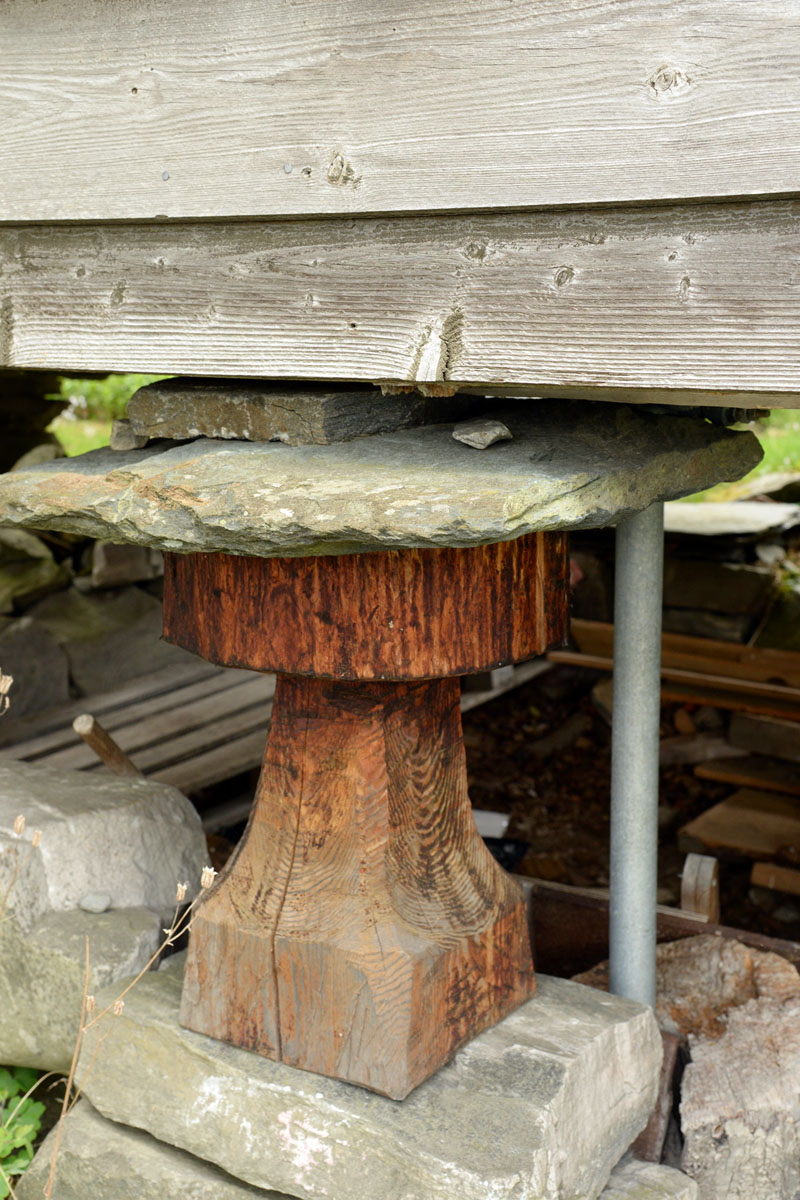 It's possible to join a guided tours, visit the cafe or visit an excibition on the location. But they were not open for that while we were here. However we could walk around between the buildings. There is also a map and a board with information, so we were able to get some knowledge about the place. 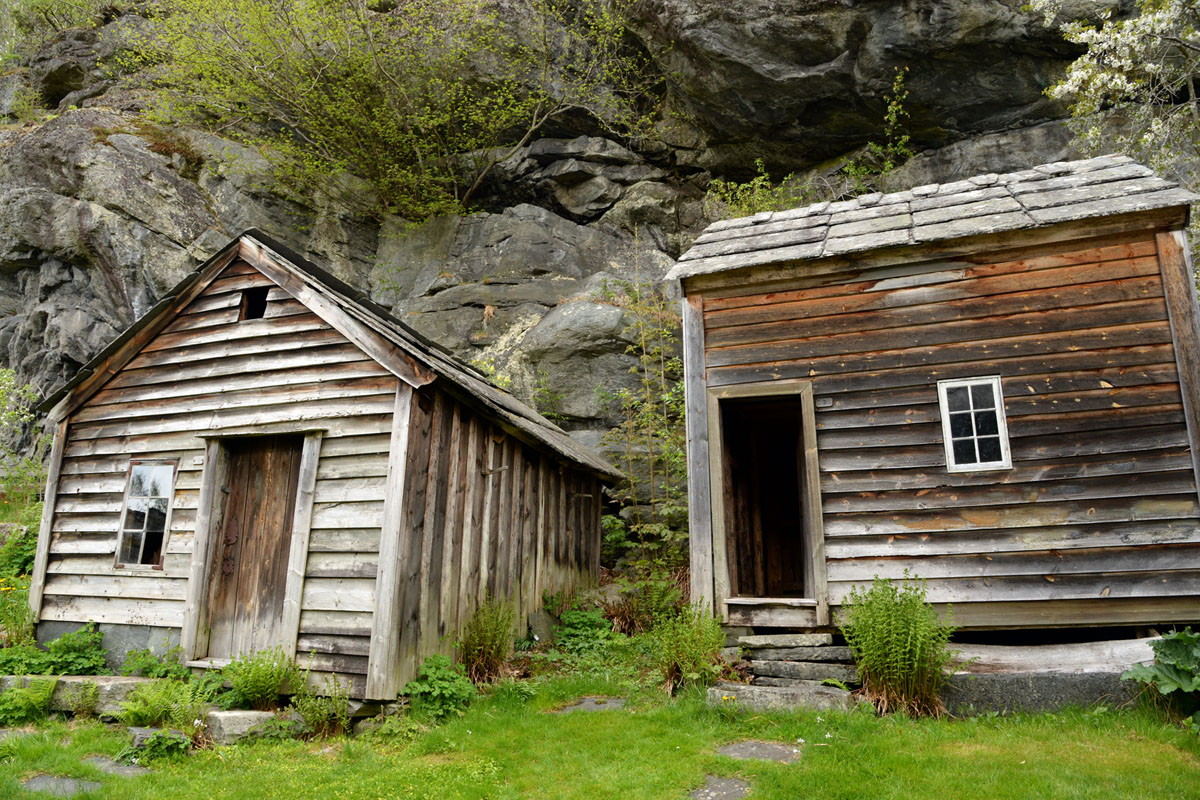 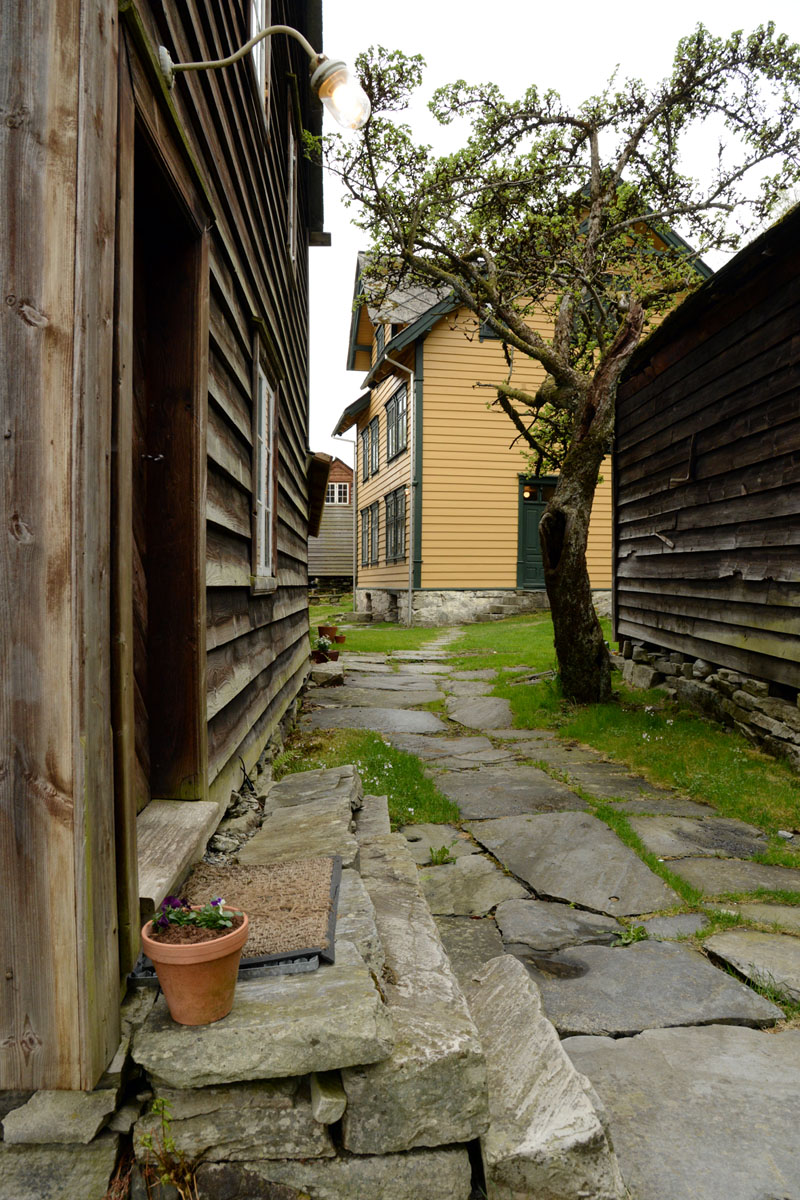 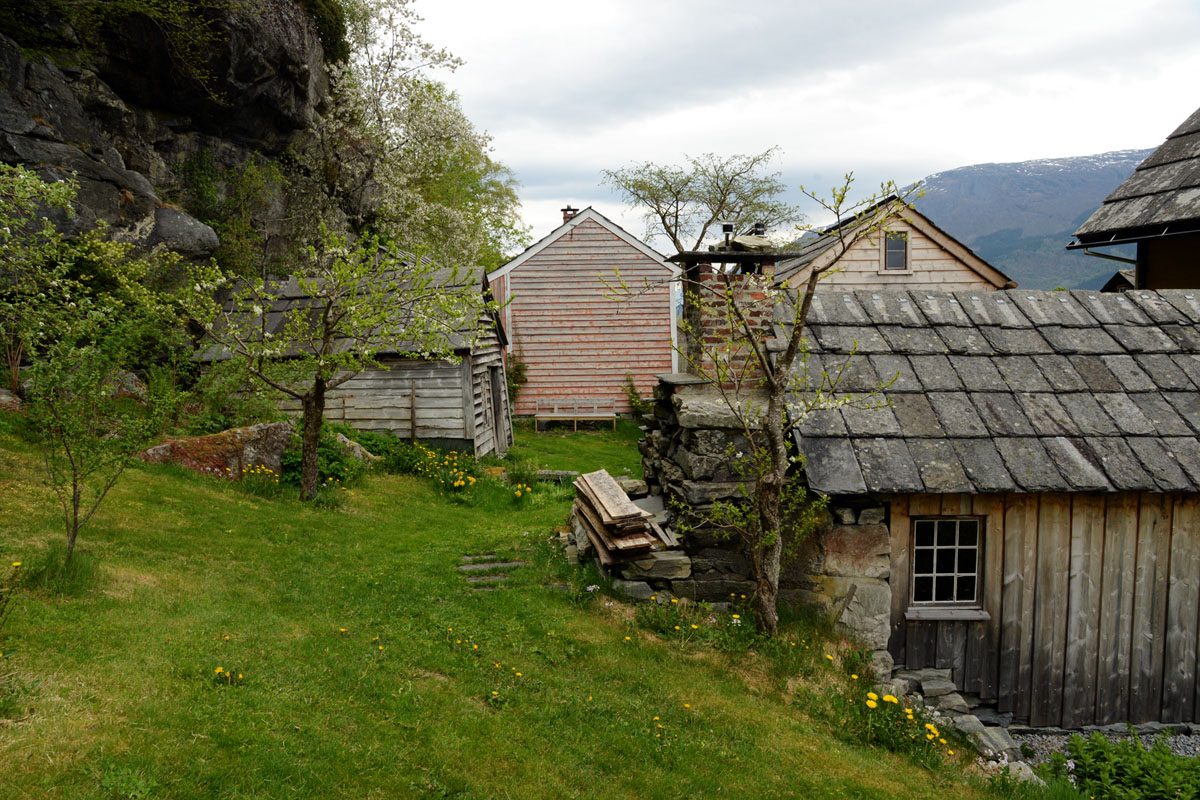 Aga was a place of power in the middle Ages. It was the knight Sigurd Brynjulvson who in 1250 built one of the houses that still stands here today. He had two daughters who divided the farm between them when their father died in 1303. Later these two were divided into several more and thats how Aga ended up as a cluster hamlet, which is a kind of shared farming village. These hamlets were most often placed in a protected area. Aga is located under a boulder that protects the buildings in winter when there is a danger of avalanches from the high mountains behind. One might think the hamlets were built here to be protected. 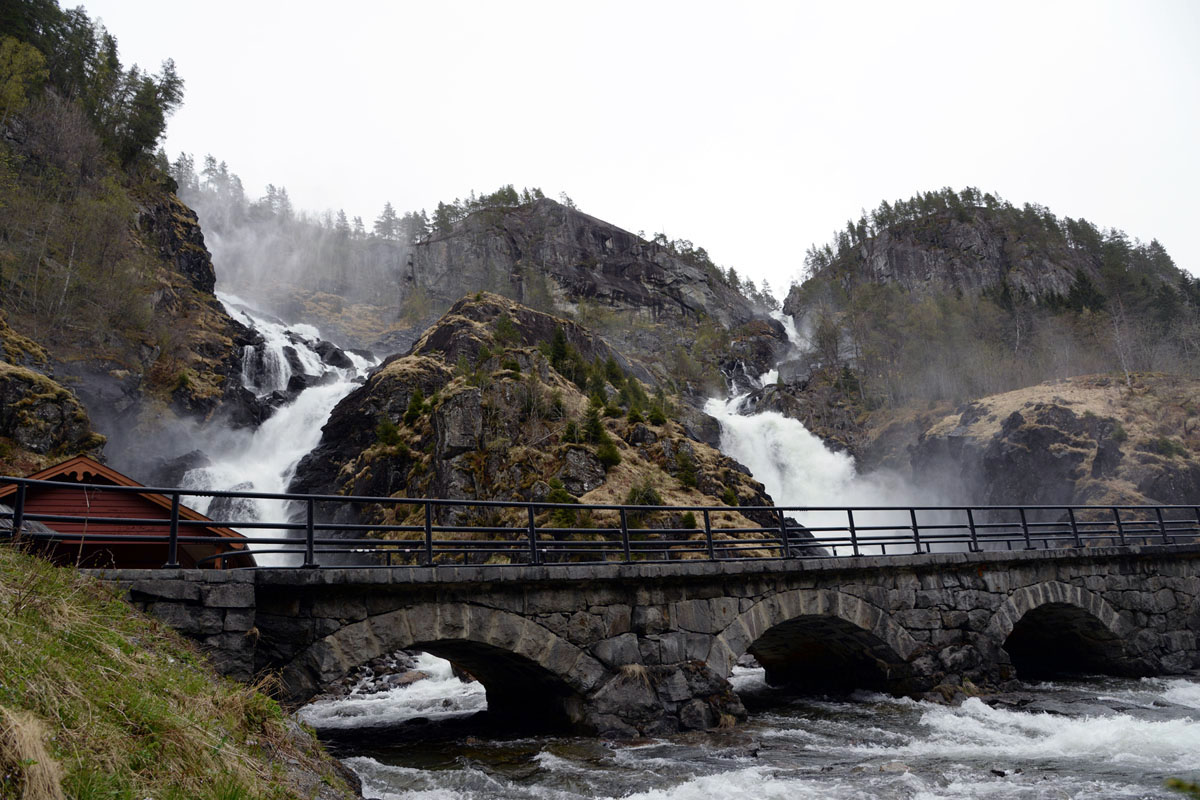 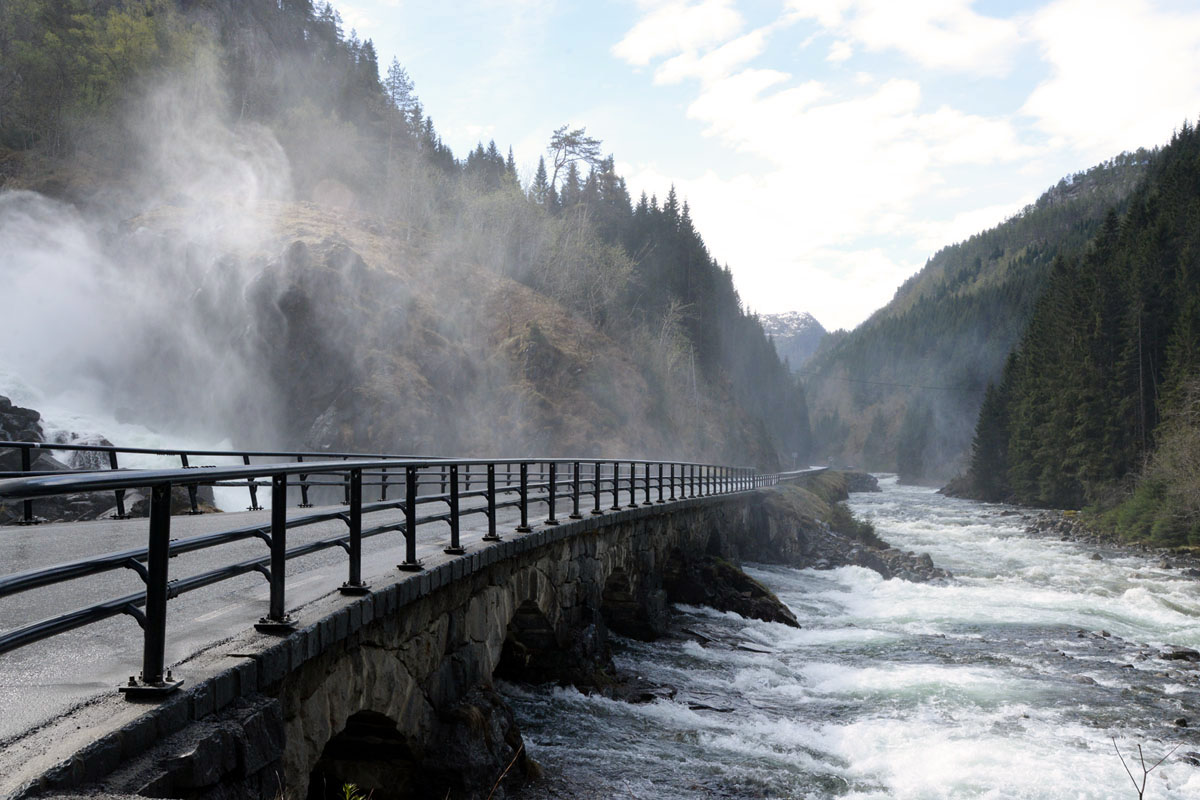 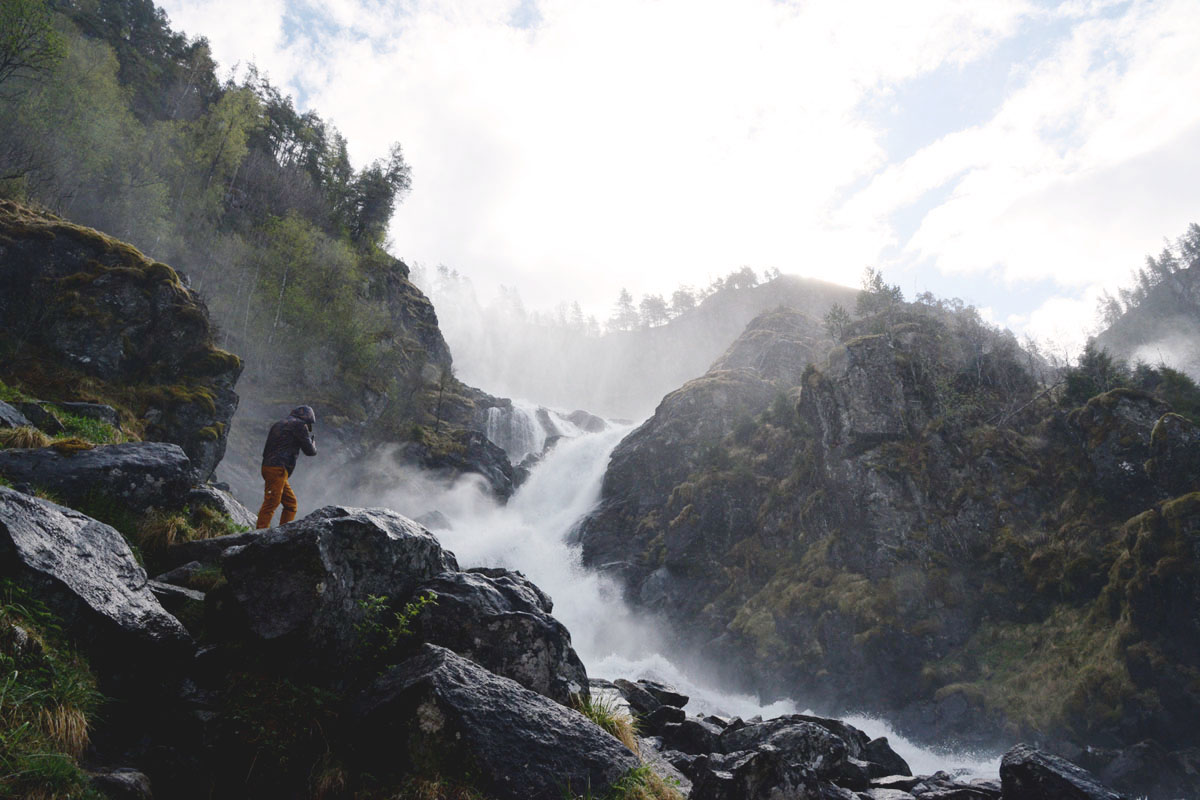 After days of driving around Sørfjorden and Hardangerfjorden, it was time to return back home. This waterfall is just one of many we passed on our way, but «Låtefossen» is the most famous of all the waterfalls in this valley. The vertical fall is 51 meter and over a distance of 400 meters down the valley it falls 165 meterw. Besides beeing behind the bridge, I also went down into the river, but standing on rocks. 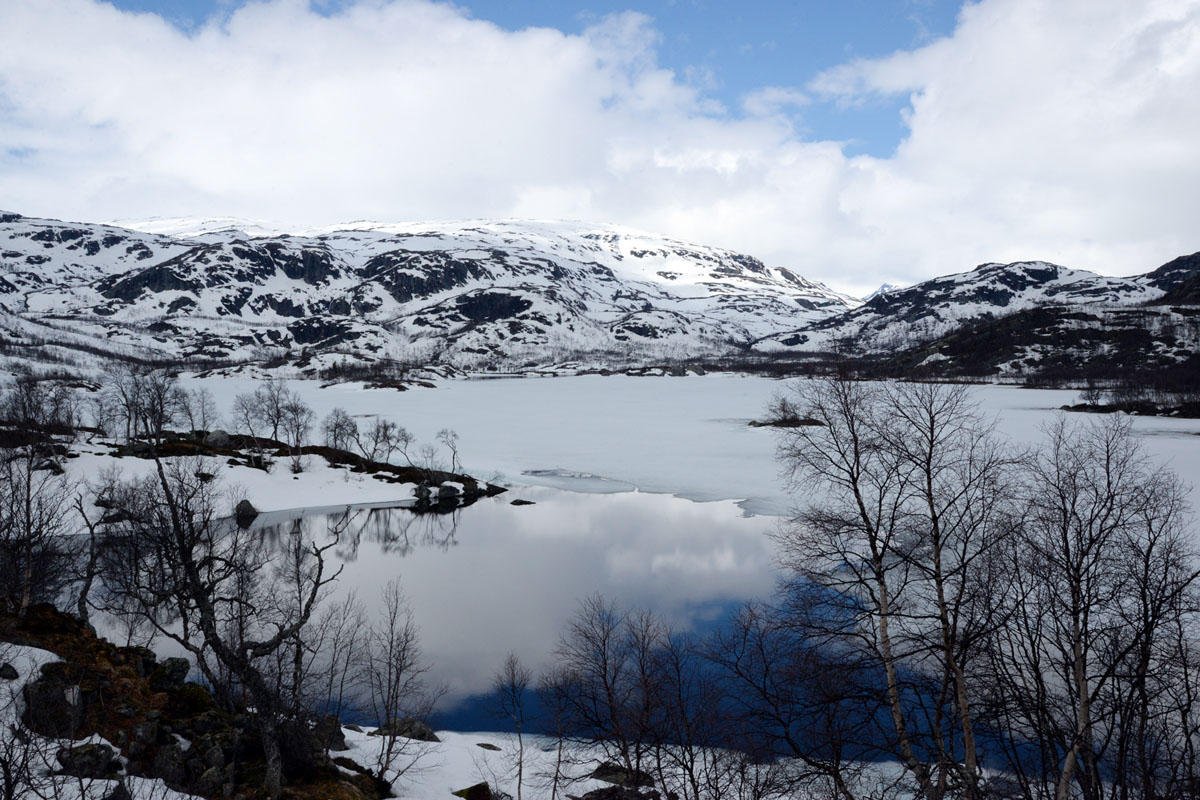 We continued our five hour drive across the higher mountains and down Setesdalen to Kristiansand. From the bottom of the valley, the sometimes narrow road goes steeply upwards before the it goes down into the valley again. This trip has really been able to offer varied and dramatic scenery. The 18 Scenic Routes:

Latest travel stories, check out :
China - An amazing show performed on the river by 600 locals

One gorgeous photo after another and an excellent tour. I saw that cover image on two features now, had to see my for myself.

thanks :) The best time of year is right now. Our timing was perfect.

wow, amazing. I love this so much

Hi @digi-me, your post has been upvoted by @bdcommunity courtesy of @rehan12!

Hiya, @ybanezkim26 here, just swinging by to let you know that this post made it into our Top 3 in Daily Travel Digest #1213.