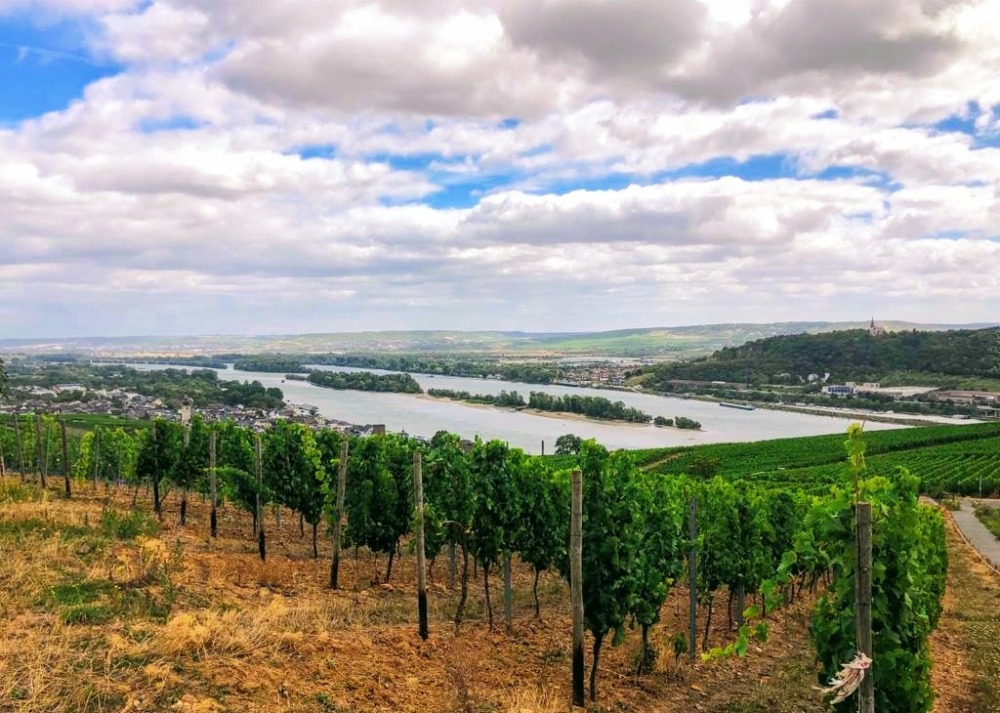 Day three of our trip in Germany brought us to Rudesheim am Rhein, another small town located within the Mosel Valley. The town is situated along the banks of the Rhein river about a two hour drive east from Cochem. The drive from Cochem takes you along the river on a scenic route that passes through several small villages and vineyards as well as more than a few castles. I wasn't counting but I'd say we passed at least 10-12 castles of various sizes along the way.

We arrived at town around 11 am and had a quick coffee and waffle before heading out to explore what the town had to offer. 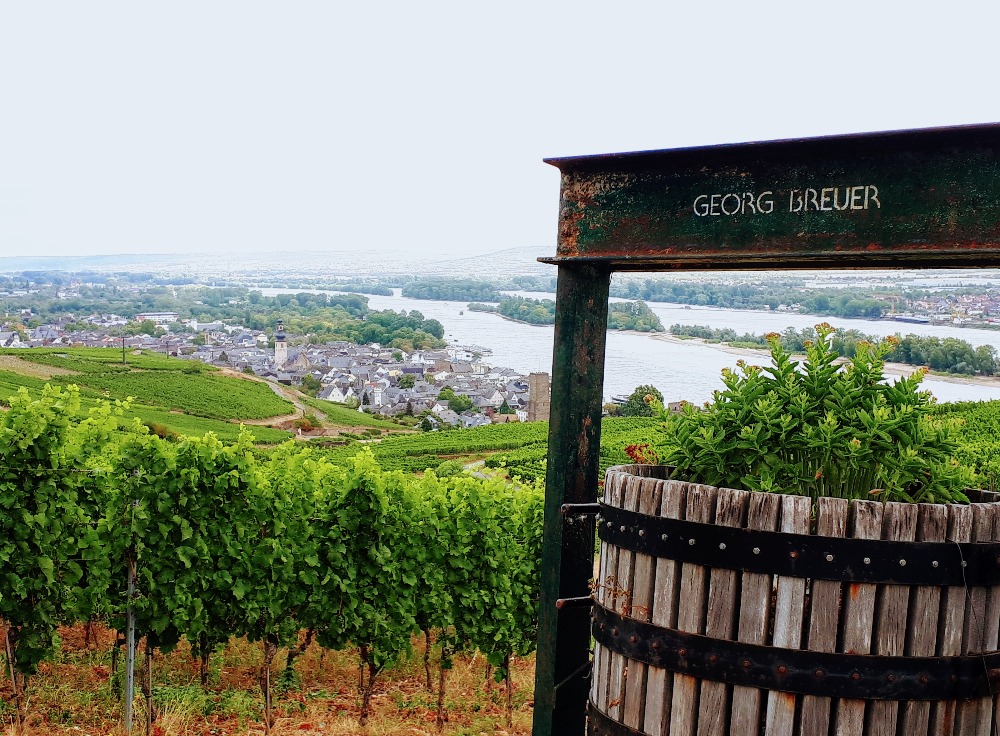 One of the first things that we did upon arrival was hike up to the Niederwald monument through a massive Reisling vineyard owned by a local wine maker by the name of Georg Breuer. Later on in the day we stopped by their shop in town to sample a few of their wines and ended up buying three bottles of their Rose. We actually opened a bottle last night before dinner. We never were good at storing wine for long periods of time. 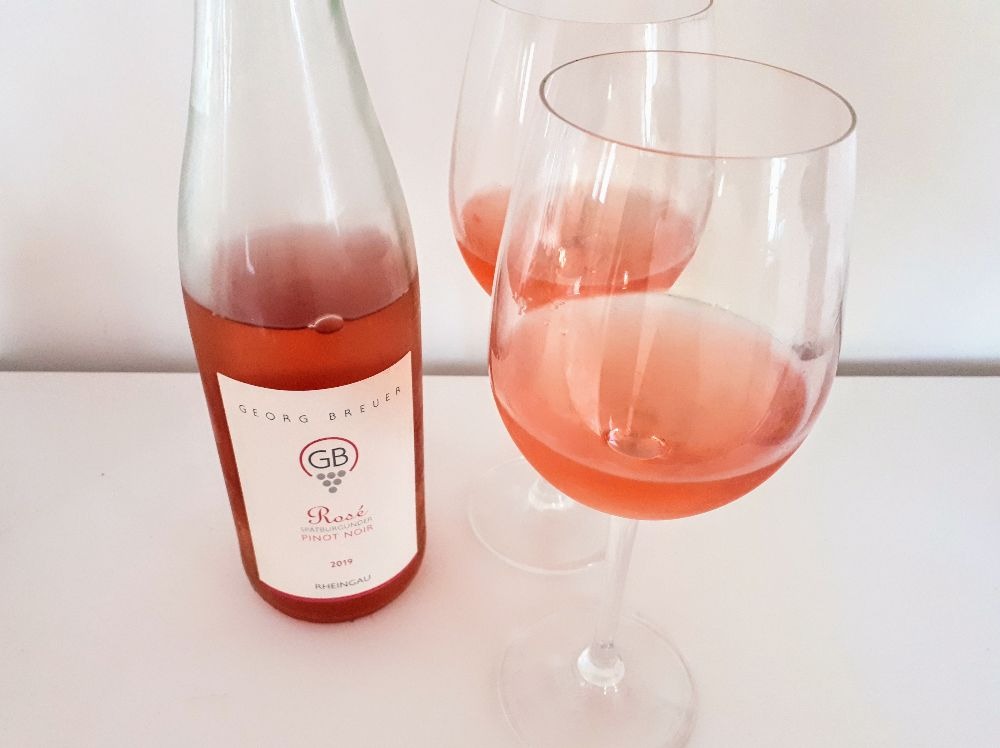 The hike up to the monument was moderately difficulty and took us about an hour. It was mostly up hill on dirt roads or rocky terrain and there were several staircases along the way. 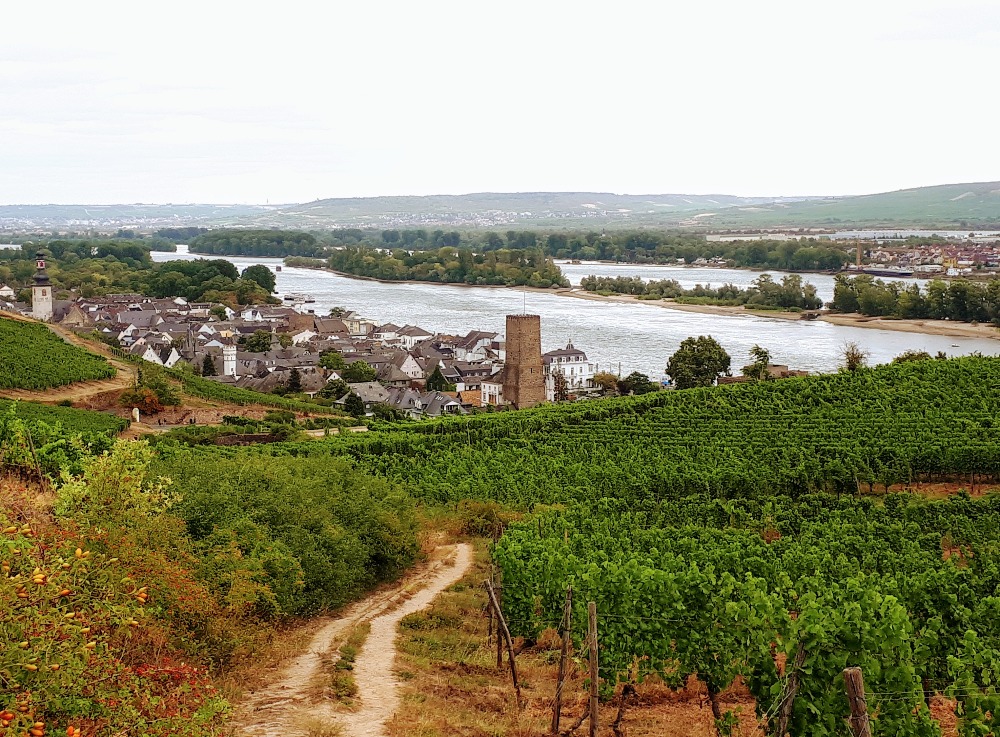 Another option for getting to the monument though is by cable car. It goes from the center of Rudesheim all the way up to the top of the hill. From there its just a short walk over to the monument itself. The cable car wasn't running when we were there though, because of covid.

There is also a shuttle bus route and a paved road that goes to the top of the hill as well, so driving to the monument is also an option. 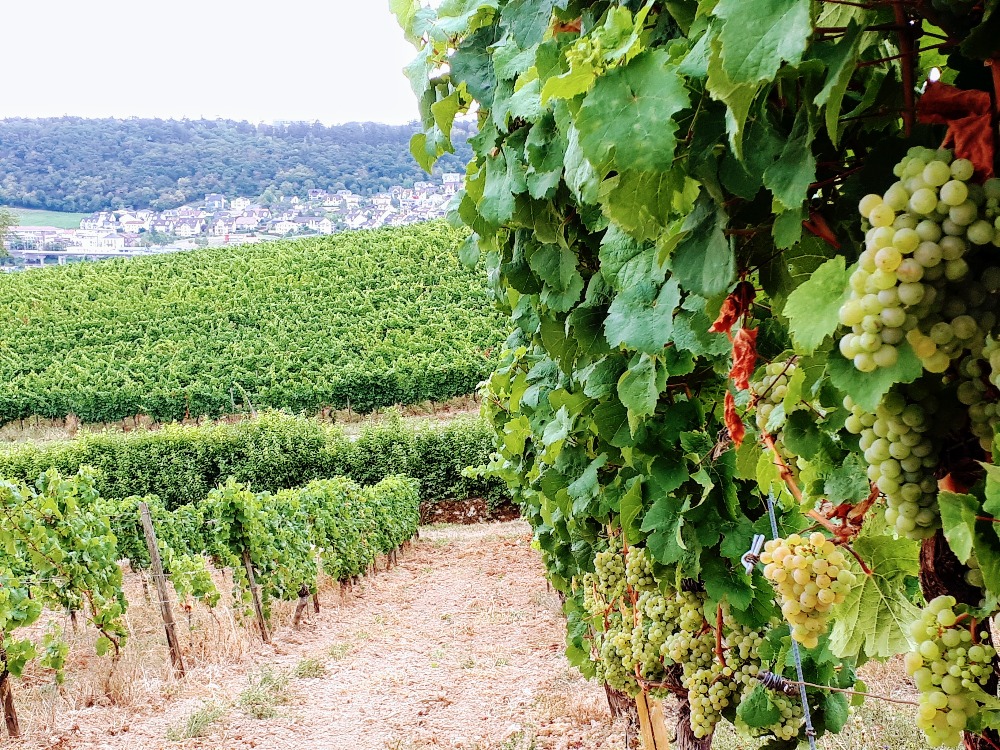 We preferred to walk through the vineyard anyway, among the grapes. I think the dog preferred it as well. 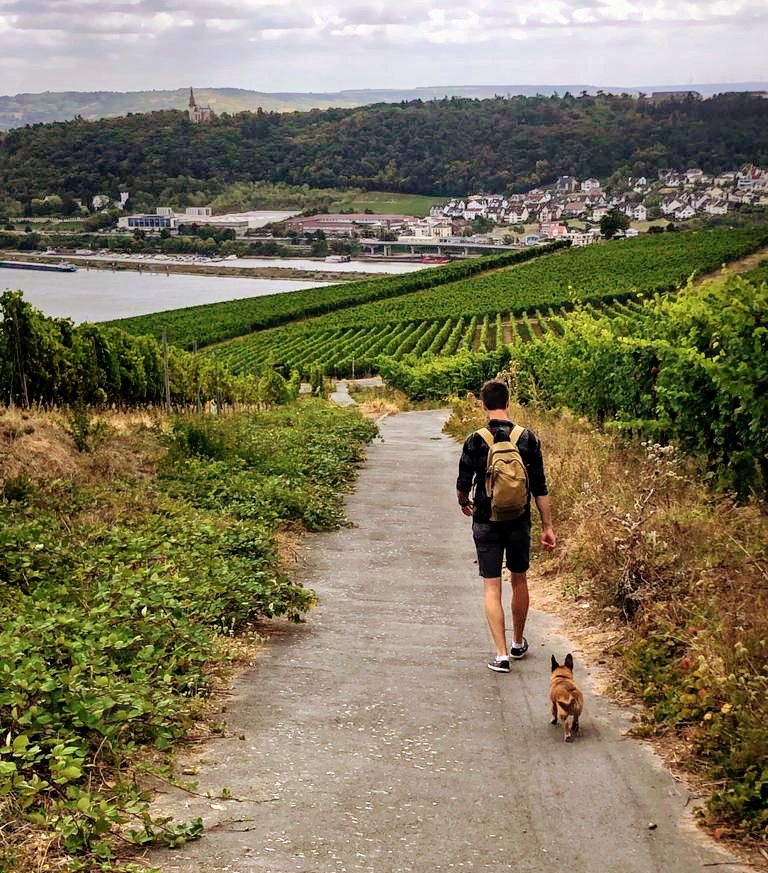 My wife was pretty excited about him being able to walk off leash. She kept referring to him as a "trail dog." He has become quite the adventurer as of late. 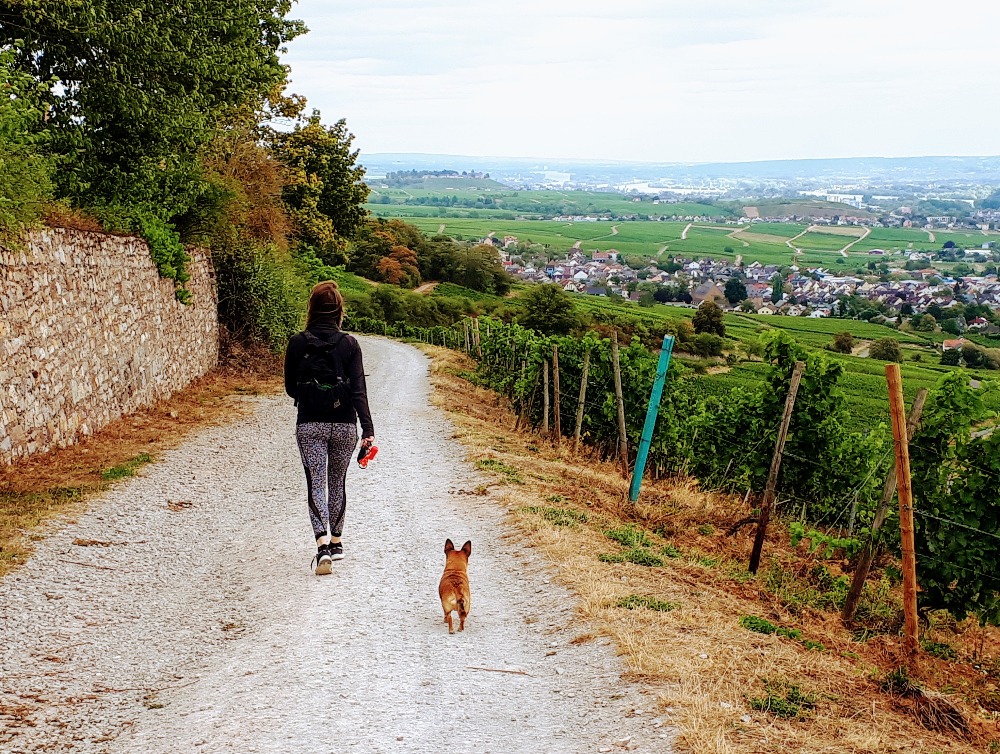 The vineyard mostly contained green grapes, but we did notice a few rows of red grape vines scattered throughout as well. It seemed as though there was no rhyme or reason as to where the red grapes were planted though which seemed a bit odd to me. 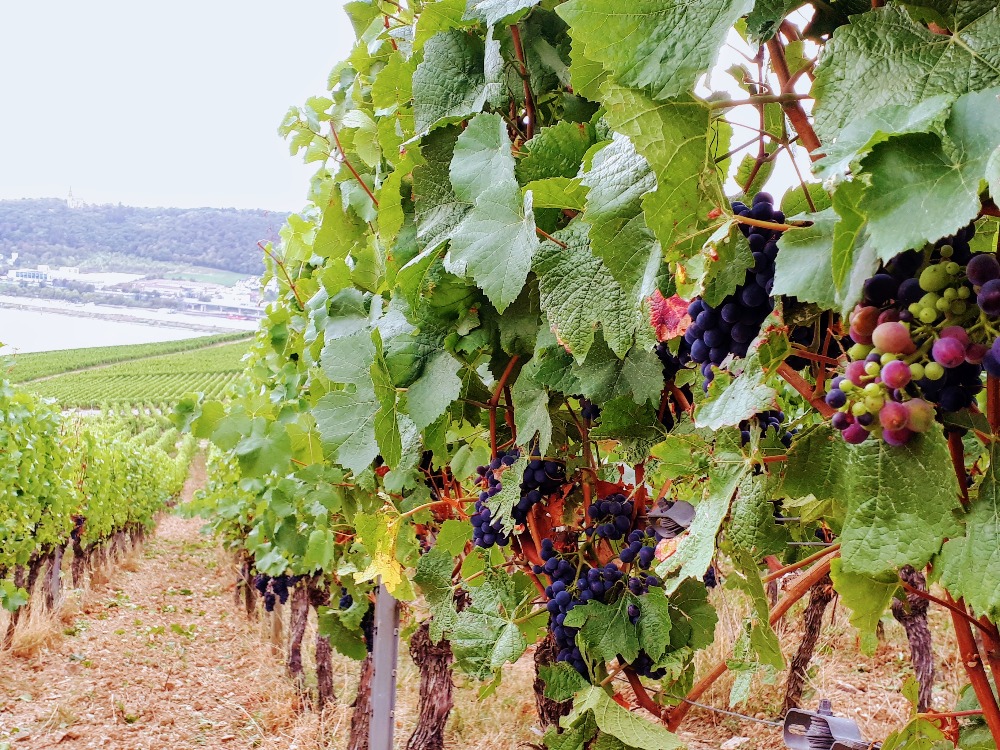 I'm not an expert on wine making by any means but I would have thought that it would be more efficient to plant all of the red grapes together to make it easier to pick them all at once. Maybe someone else knows the reason for mixing them up like that? 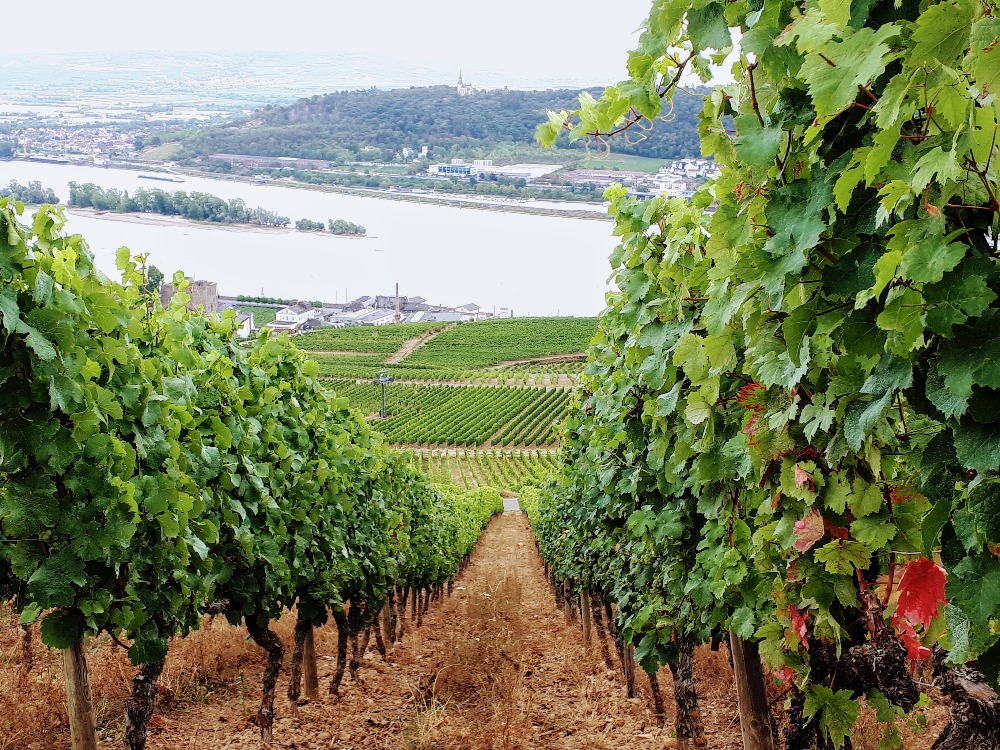 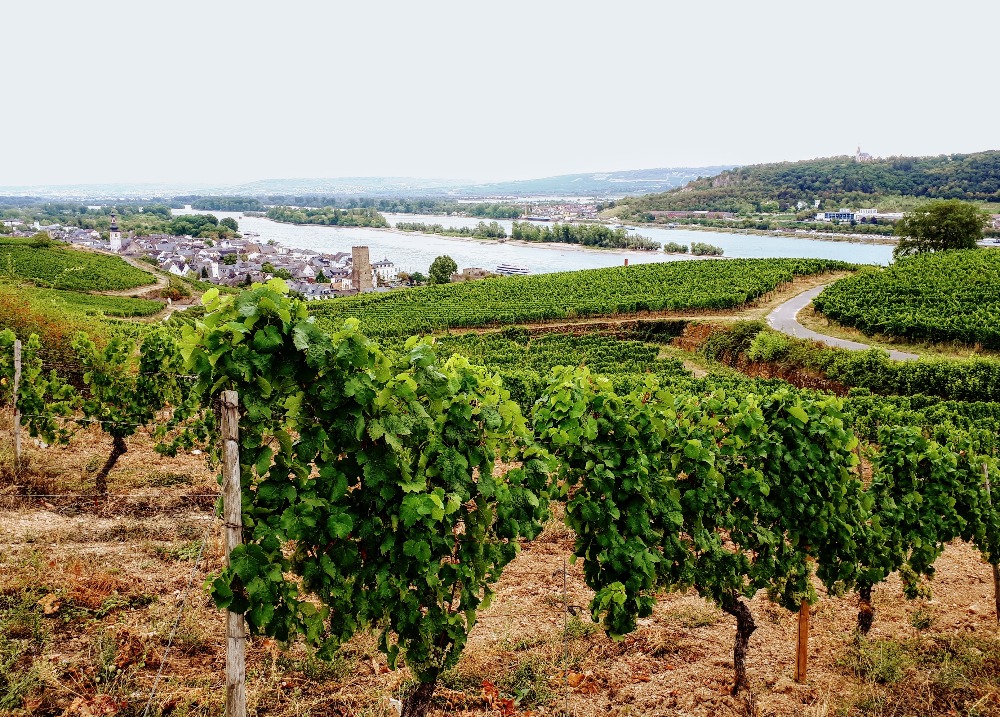 The view of the river and town below becomes more pronounced as you get closer to the top. As you can see in the photo below, the trail that we walked winds its way through a large portion of the vineyard and offers several different paths to the top. 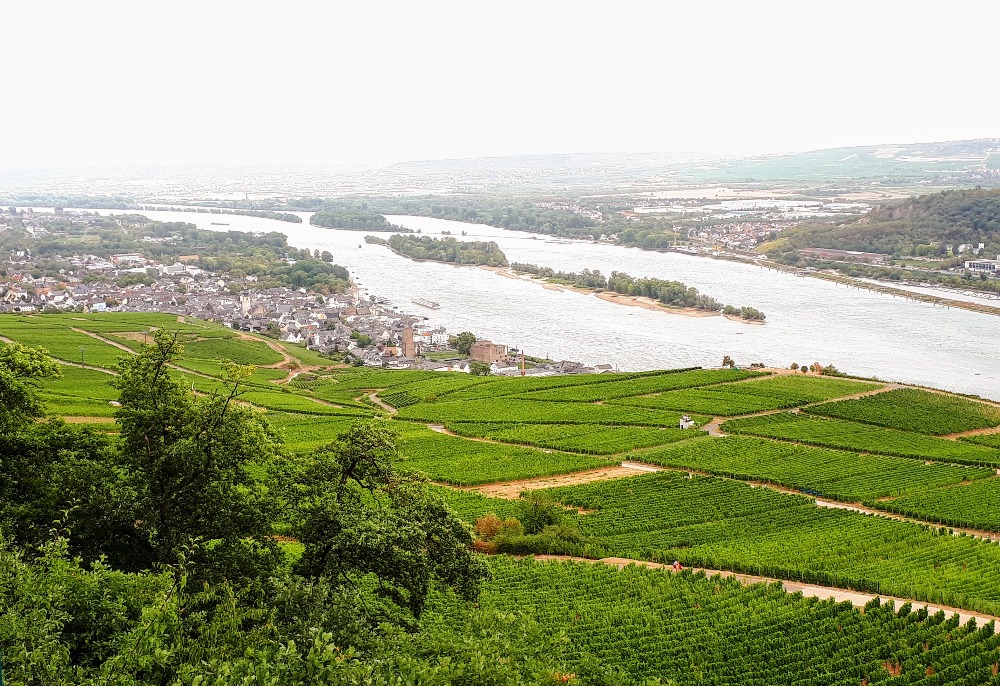 Looking back from the top of the hill gives you a spectacular view of the towns of Rudesheim am Rhein and Bingen as well as the Rhein river and valley. 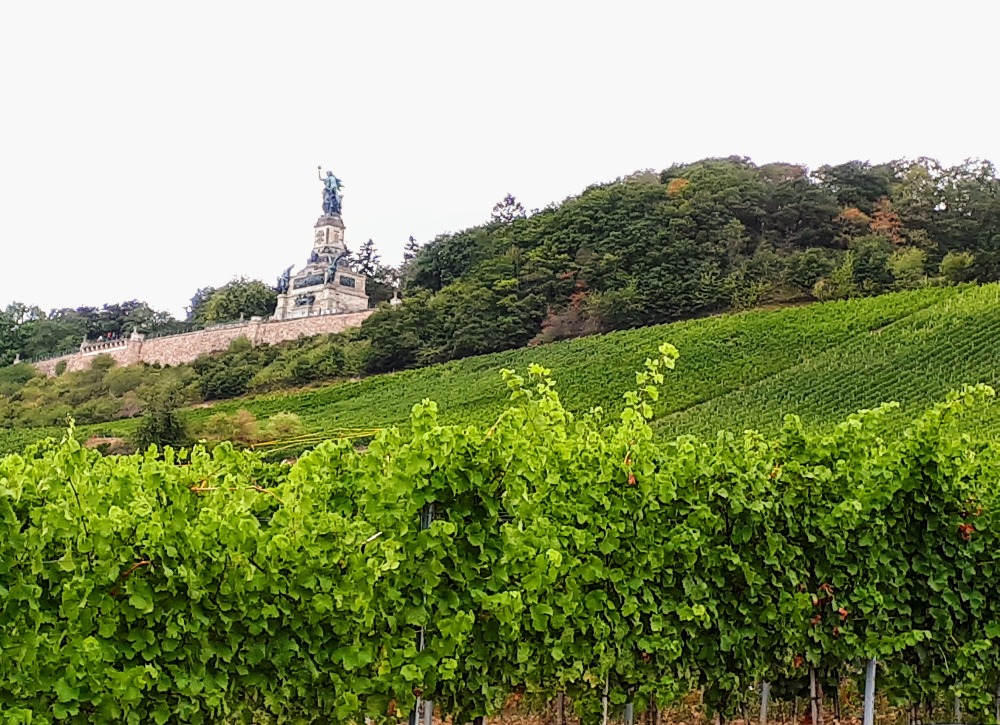 Sometimes referred to as the "Statue of Liberty" of Germany, the Niederwald Monument is considered by many to be one of the most beautiful works of art in the country. It stands 38 meter tall and was built in 1871-1883 to commemorate Germany’s victory over France and the unification of the German empire after the Franco-Prussian war.

It has been a powerful symbol of national pride in the country for more than a century. 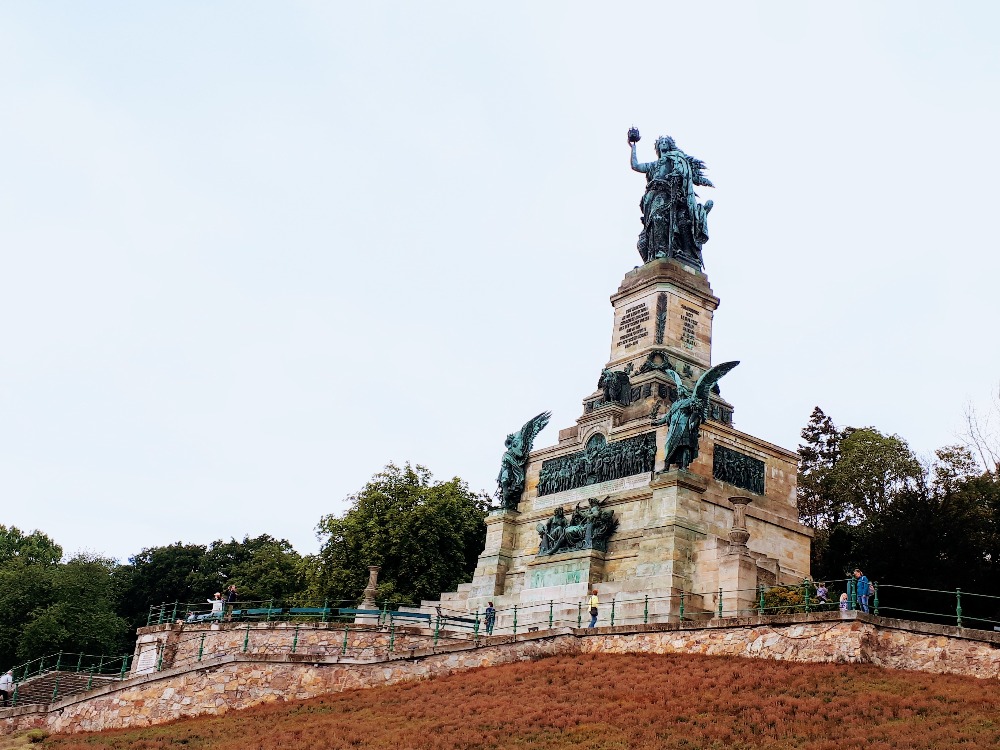 A 10.5 meter tall bronze statue of the female Germania stands in front of a large throne decorated on either side by eagles. That rests upon a massive stone base cornered by two winged angels one of which represents the angel of peace while the other represents the archangel Michael. Germania herself faces towards the East in the direction of the Rheingau. She holds her imperial crown in her right hand, presenting it to the German people. 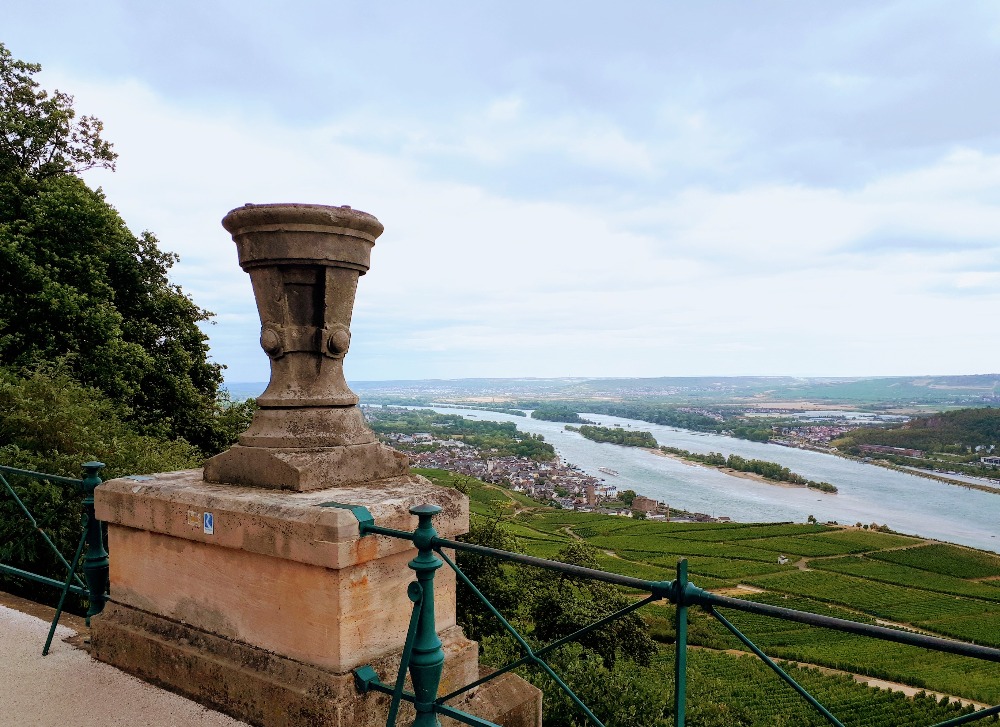 Large information boards on site describe the statues history in both German and English. A few things that I found interesting were that Hitler held a socialist rally at the site on August 27, 1933. I do not sympathize with Hitler or agree with the Nazi ideology or anything like that but I did find it to be interesting to consider that I was standing in a location of such historical significance.

Another thing that stood out in the statues history was that in 1923 the French considered destroying the monument during the occupation of the Rhineland. Though they didn't end up going through with that plan the monument did end up getting damaged a little later on during a bombing raid in 1944. It was later renovated back to its original glory and is now a protected UNESCO heritage site. 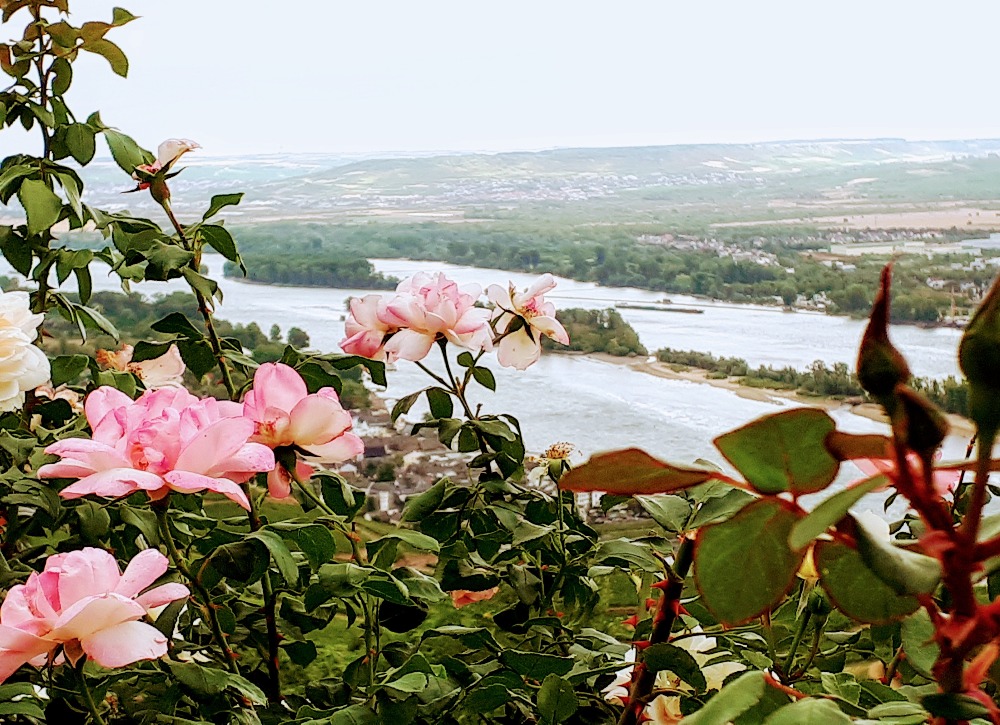 The views of the valley from the monuments platform are also pretty incredible. 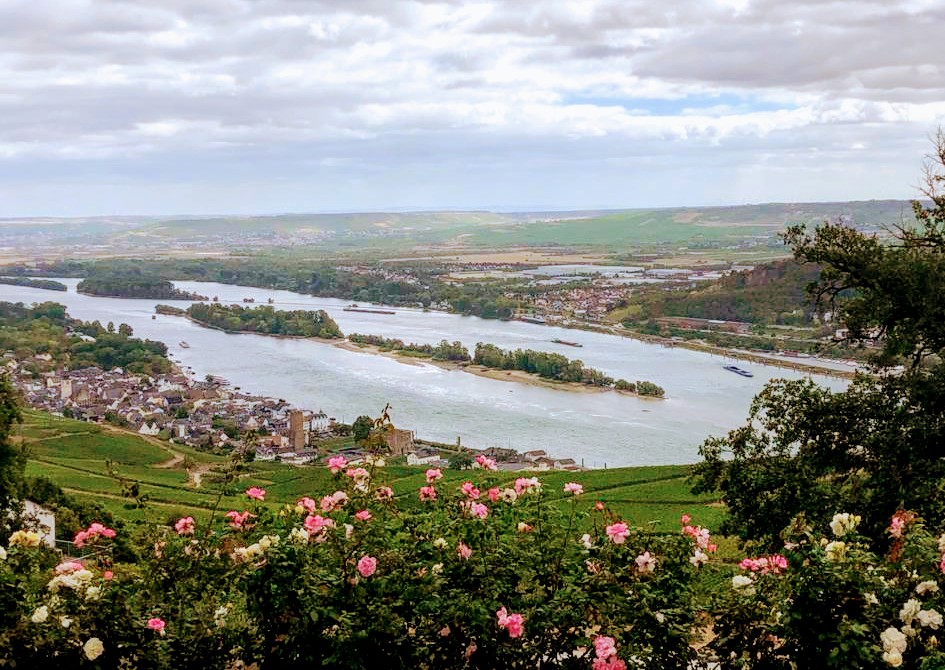 There are several benches located here where people can sit and take in the views of the river and valley below. We spent a bit of time up here before heading back down to Rudesheim. 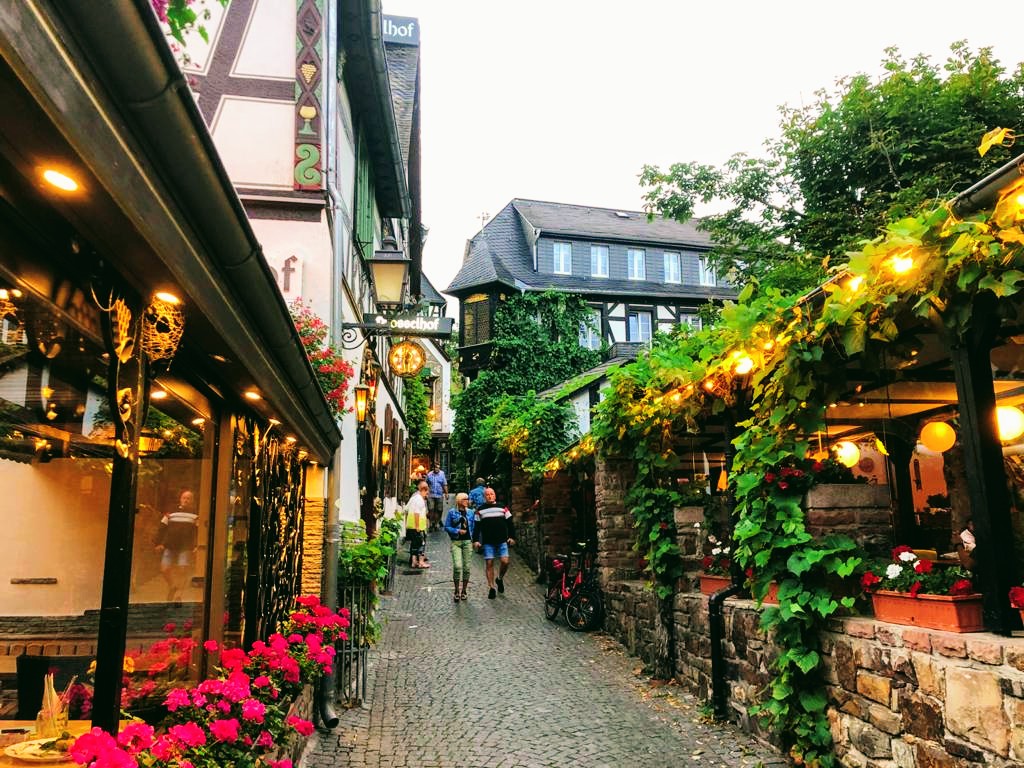 The town of Rudesheim is quite small but it certainly has a lot of charm. It ended up being one of our favorite locations during our trip to Germany. To me it felt more traditional and less touristy then Cochem. 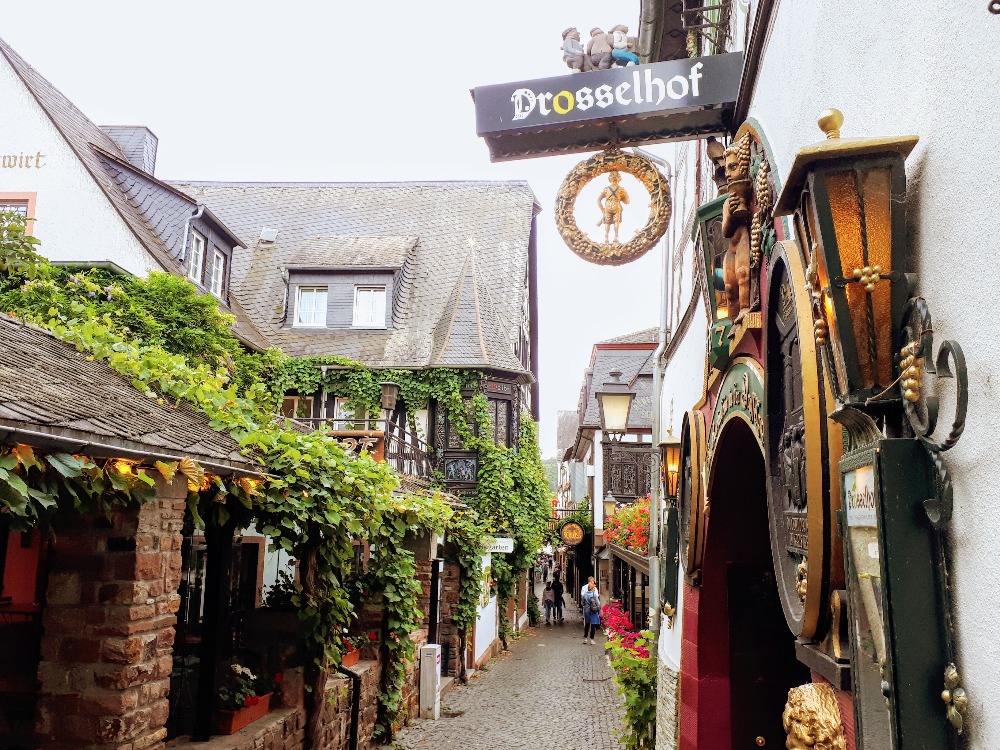 One of the main areas to visit in town is Drosselgasse lane, a historic pedestrian alleyway that was built back in the 15th century. 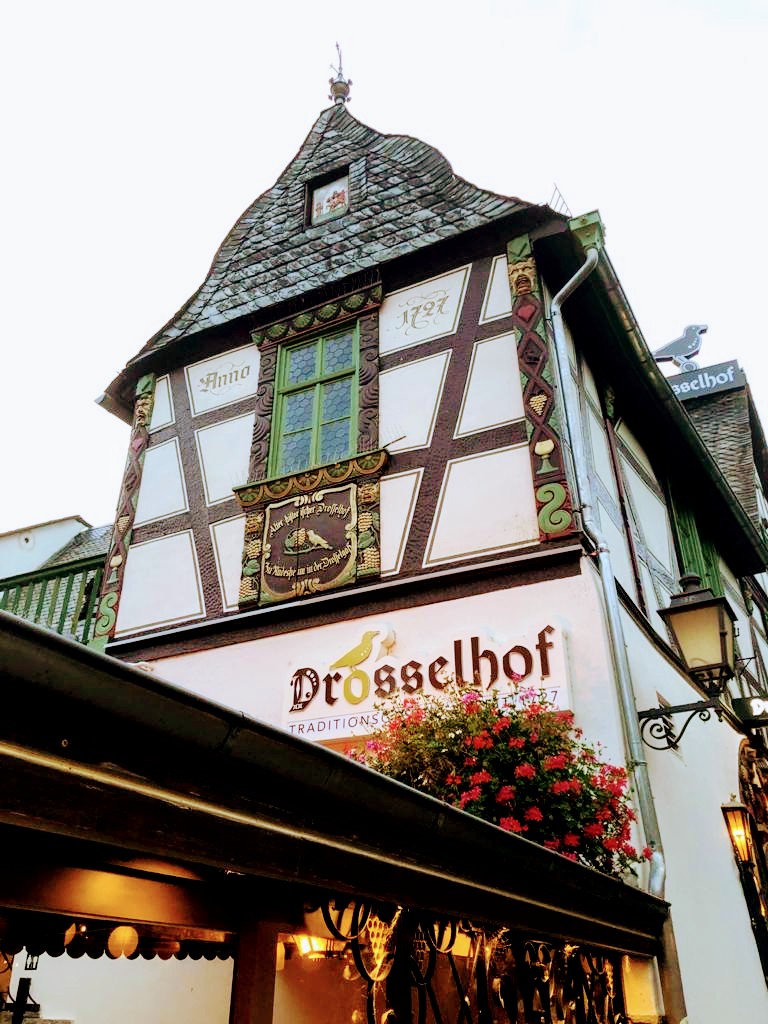 Today it hosts a variety of small restaurants with live entertainment. Wine taverns, open air beer gardens and a few small shops selling ice cream or souvenirs we also located along the street. 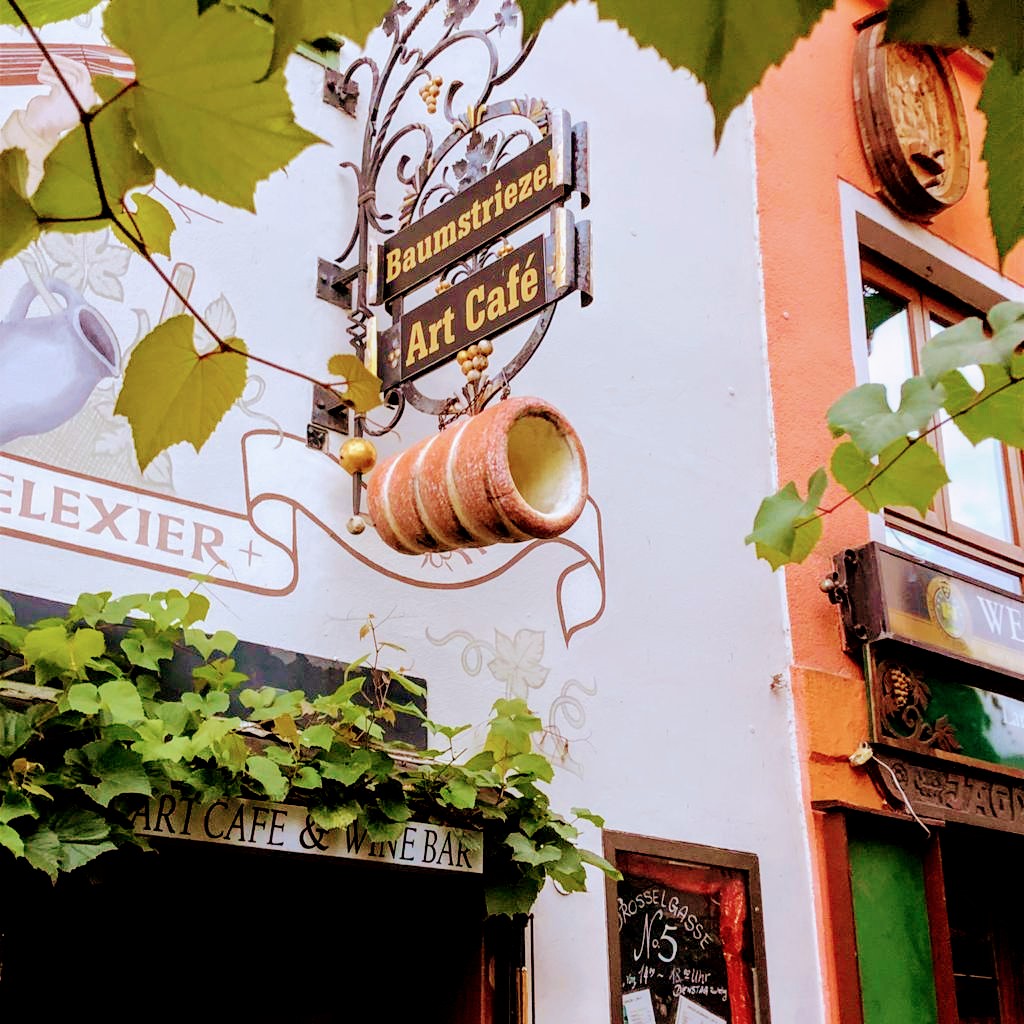 Now a famous 4 star hotel and restaurant the Breuers Rudesheimer Schloss is another famous building located in the area. It has this really neat bell tower attached to it that chimes music a few times throughout the day. 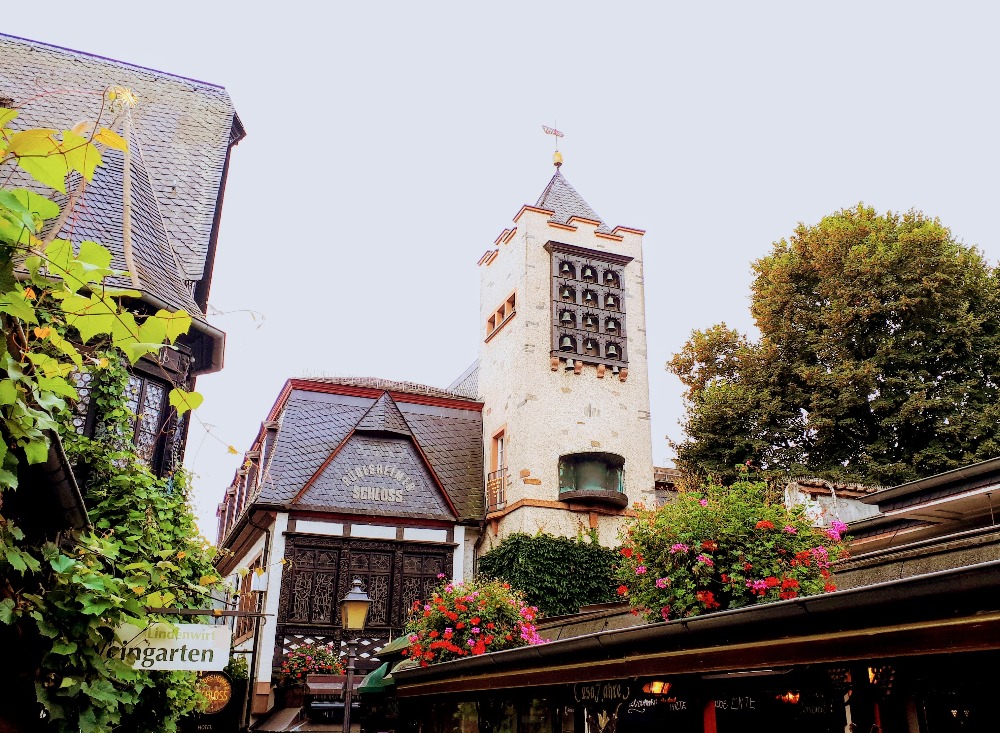 There were a few other parts of town that were quite nice as well. I really like the wine cellar and restaurant pictured below. Not surprisingly, wine cellars were quite common in town. Just what you'd expect from a place located beside several large vineyards. 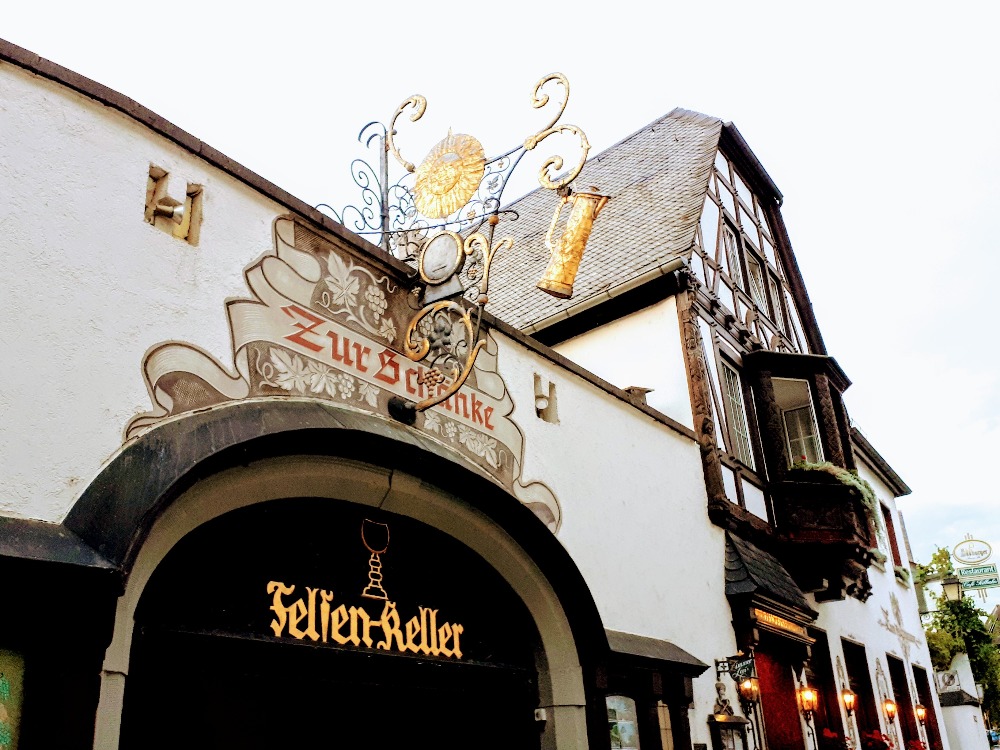 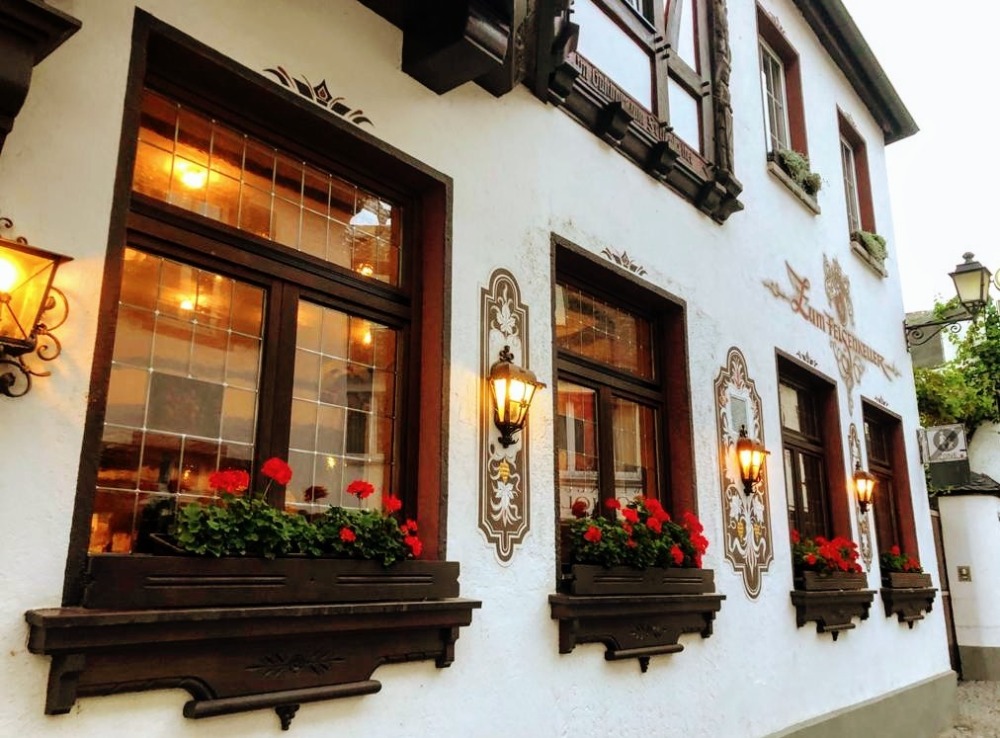 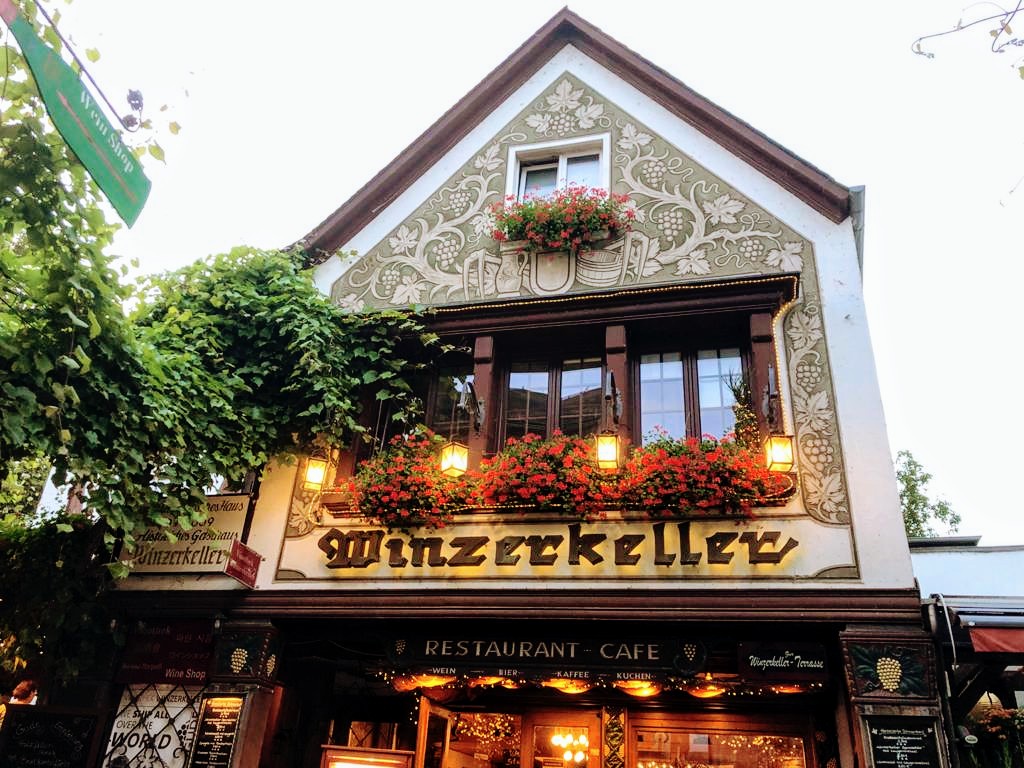 There were a lot of other nice buildings in town as well. 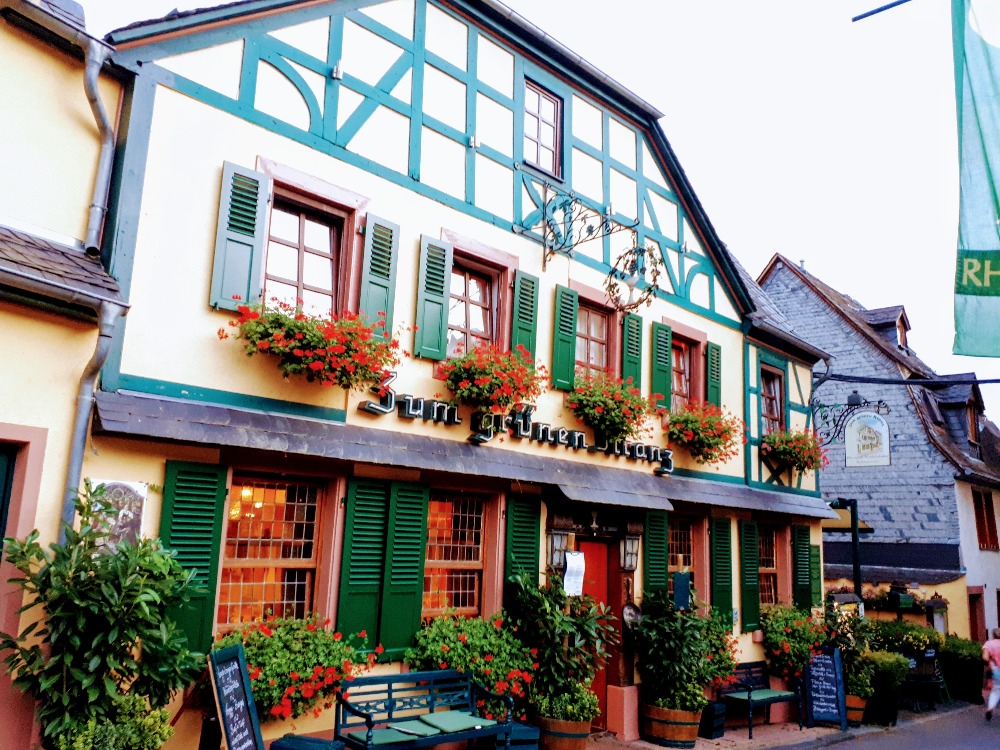 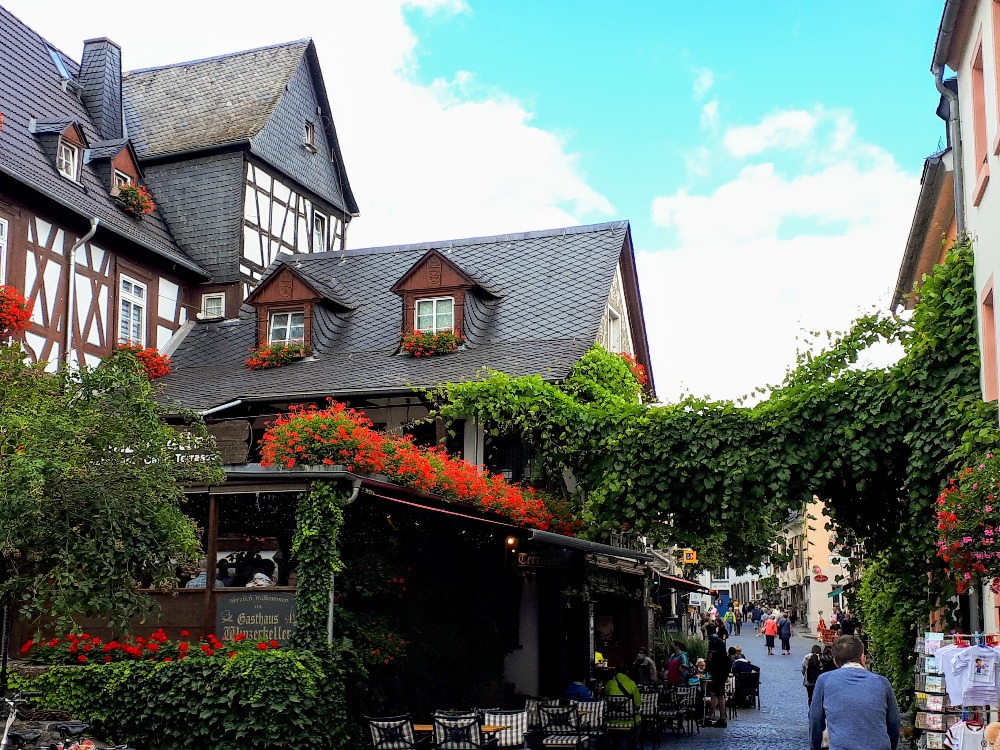 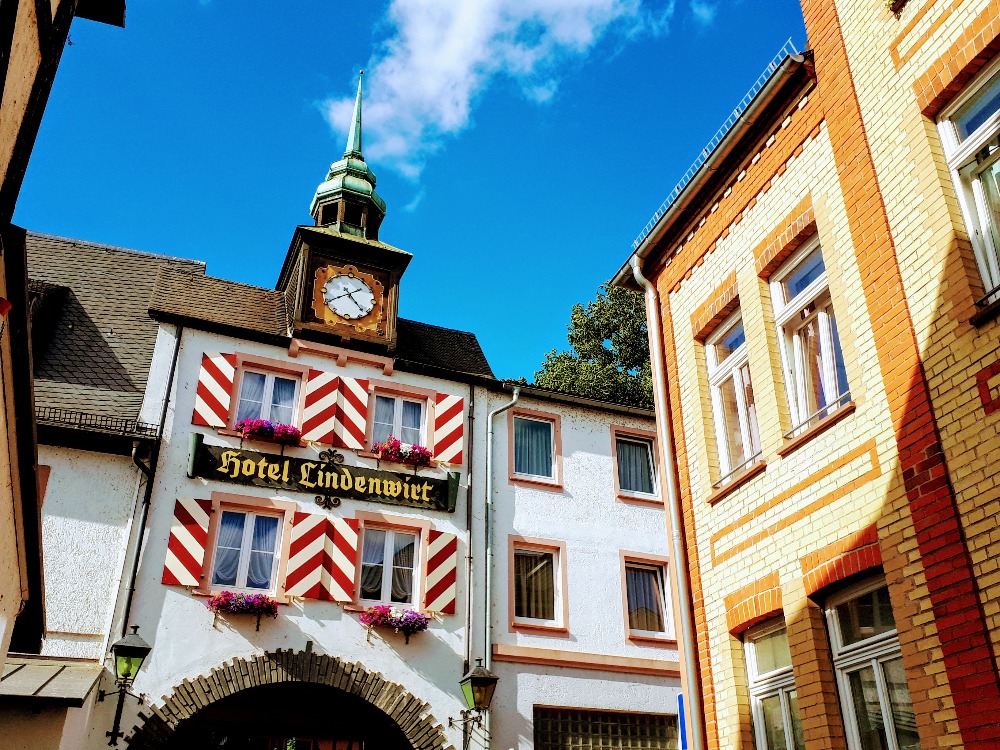 We ate supper in a small restaurant on Drosselgasse. Here a local musician sang folk songs and played his accordion while the waitresses wore traditional serving attire. The place was decorated in a comforting homey style decor and overall it had the feeling of eating dinner at your grandmothers home. It was really nice. 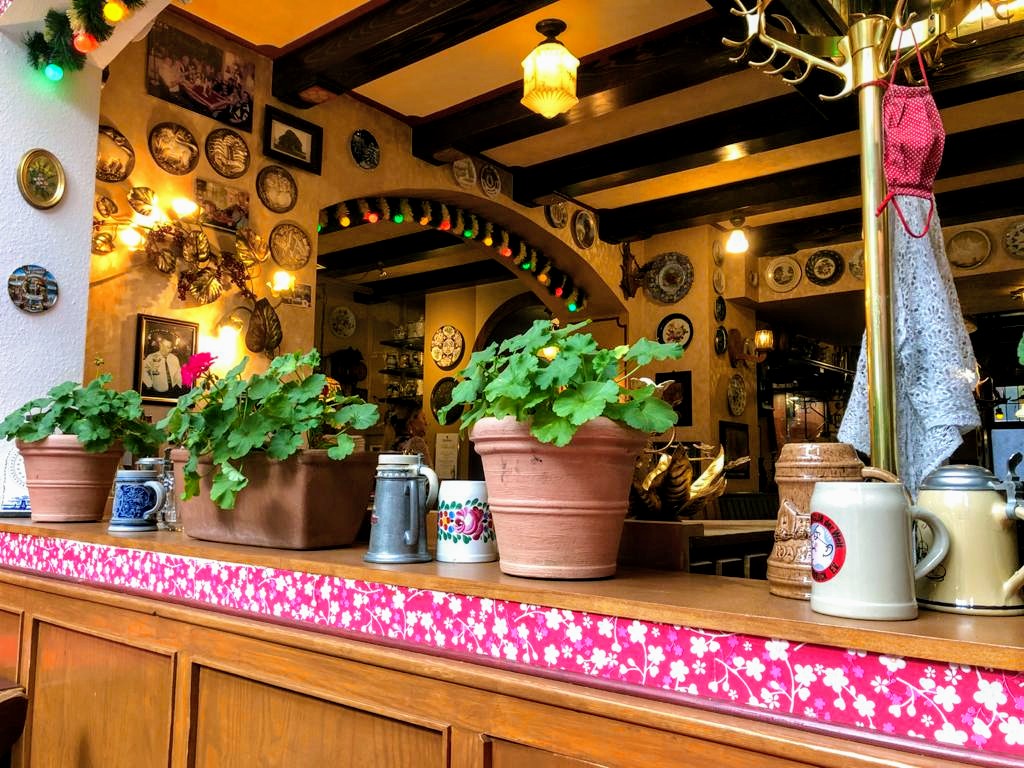 I also tried spaetzle here for the first time, which is a traditional handmade hearty pasta. It was served as a side along with schnitzel or roast beef. I thought it was quite delicious and would recommend trying it if you visit Germany. 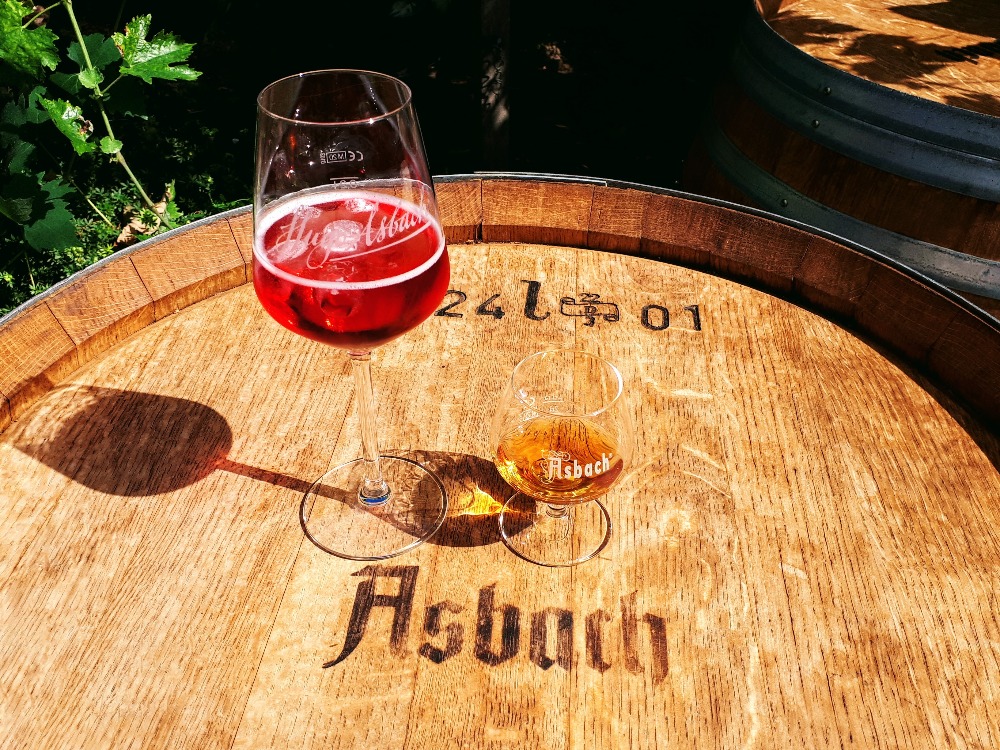 Along with its amazing wine the town of Rudesheim is also famous for its Asbach Uralt Brandy, which is a distilled wine liquor similar to Cognac. The town also specializes in an alcoholic desert coffee called Rudesheimer Kaffee, which contains Asbach liquor and is served flambe style in restaurants. I would have liked to try the coffee but I didn't learn about the drink until later that night and I generally try to avoid drinking coffee at night so that I'm able to fall asleep. I will admit that I regret not trying it. Oh well, next time perhaps.

The Asbach distillery was founded in 1892 by Hugo Asbach, and the liquor continues to be made in the town of Rudesheim even to this day. The facility is also open to the public for tours and tastings and I would recommend the experience if you ever get a chance to go.

There I tried the classic Asbach as well and their 15 year old Special Brandy, which was incredibly smooth and had a distinct caramel taste. It was excellent overall. My wife had their Rose aperitif which was also quite good and we ended up buying a bottle of that.

Though all of the Asbach products are sold in every store and souvenir shop in town I would recommend buying directly from the distillery if you can. You end up saving a bit of money that way. After we bought our bottle from the manufacturer I noticed that all of the shops in town priced the same bottle a few Euros higher.

Another thing that was very common to see in souvenir shops in town were cuckoo clocks. My grandma was German and they had a cuckoo clock when I was young, so I've always kind of had a thing for them. Cuckoo clocks originate from the black forest in Germany and my wife and I had discussed buying one on our trip. We saw quite a few clocks in town but we didn't end up buying one in Rudesheim.

Nonetheless, Rudesheim is where our hunt for a cuckoo clock began. You'll have to wait and see if we ended up finding one during our travels. Until then, thanks for reading!

That’s it for Rudesheim am Rhein. The next stop is Wurzburg.

If you are interested in reading more about our trip I will be posting about it over the next few days. For the previous post click the link below.

I went to the Niederwald Monument a few weeks ago. We took the cable car and also walked it up a few days later. We wanted the dog to have a good run. I didn't see many dogs off the lead in Germany. Lovely place though.

Sounds like we were there around the same time. The cable car was closed for us though so we didn't get to use it. We don't normally let the dog off leash but there weren't many people walking that day and I don't think we saw any other dogs.

I agree. Its a very lovely place.

Wow was a fun little tour you gave us. Those vineyard and the views from them are beautiful. Love the little town too.

Thanks. I'm glad you enjoyed it :)

These are some amazing photos!! So vibrant landscapes.

Thanks. I'm glad you liked it

Hiya, @LivingUKTaiwan here, just swinging by to let you know that this post made it into our Honorable Mentions in Daily Travel Digest 972.

Thank you, I appreciate it!