Swimming with a crocodile!!! Darwin - Australia 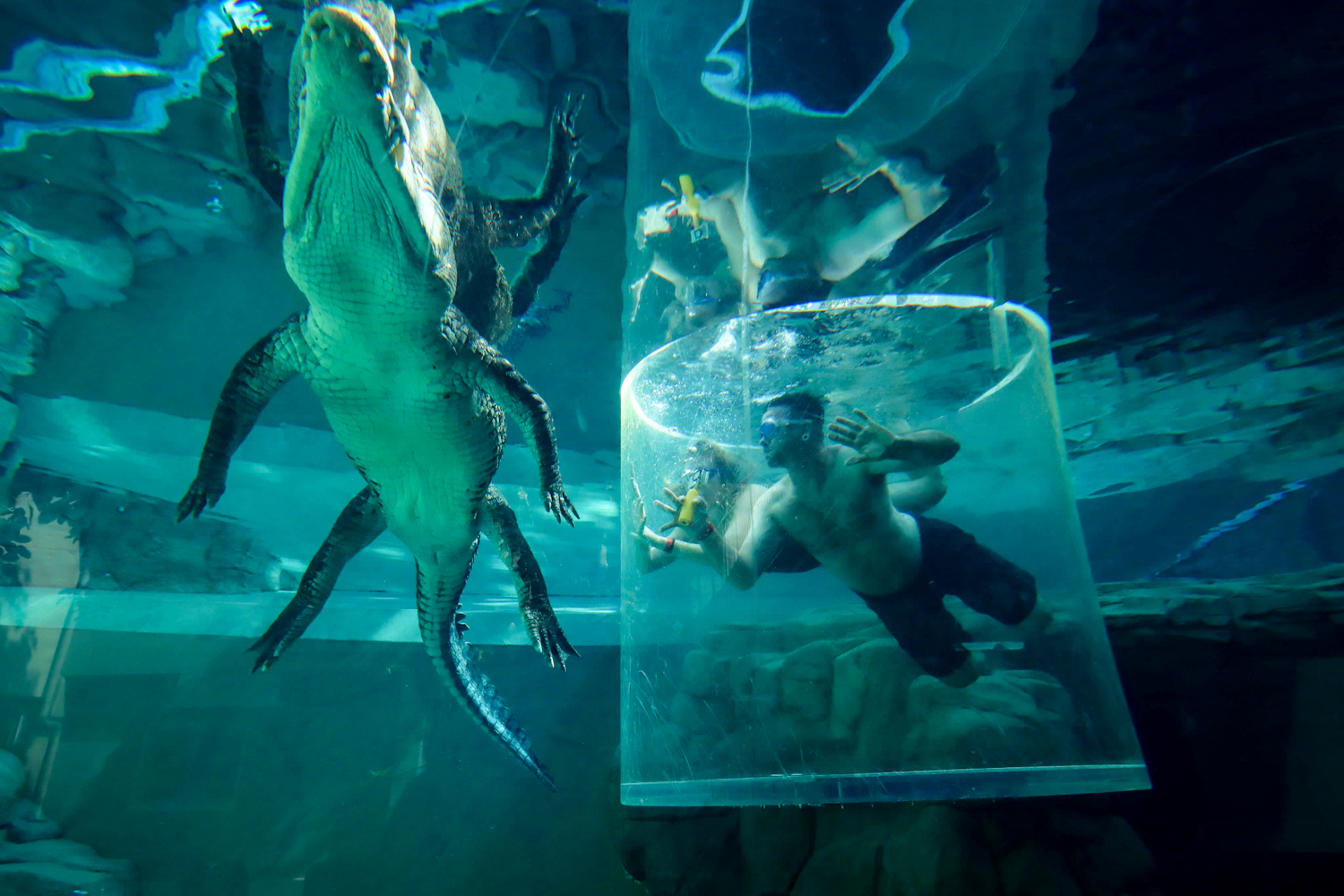 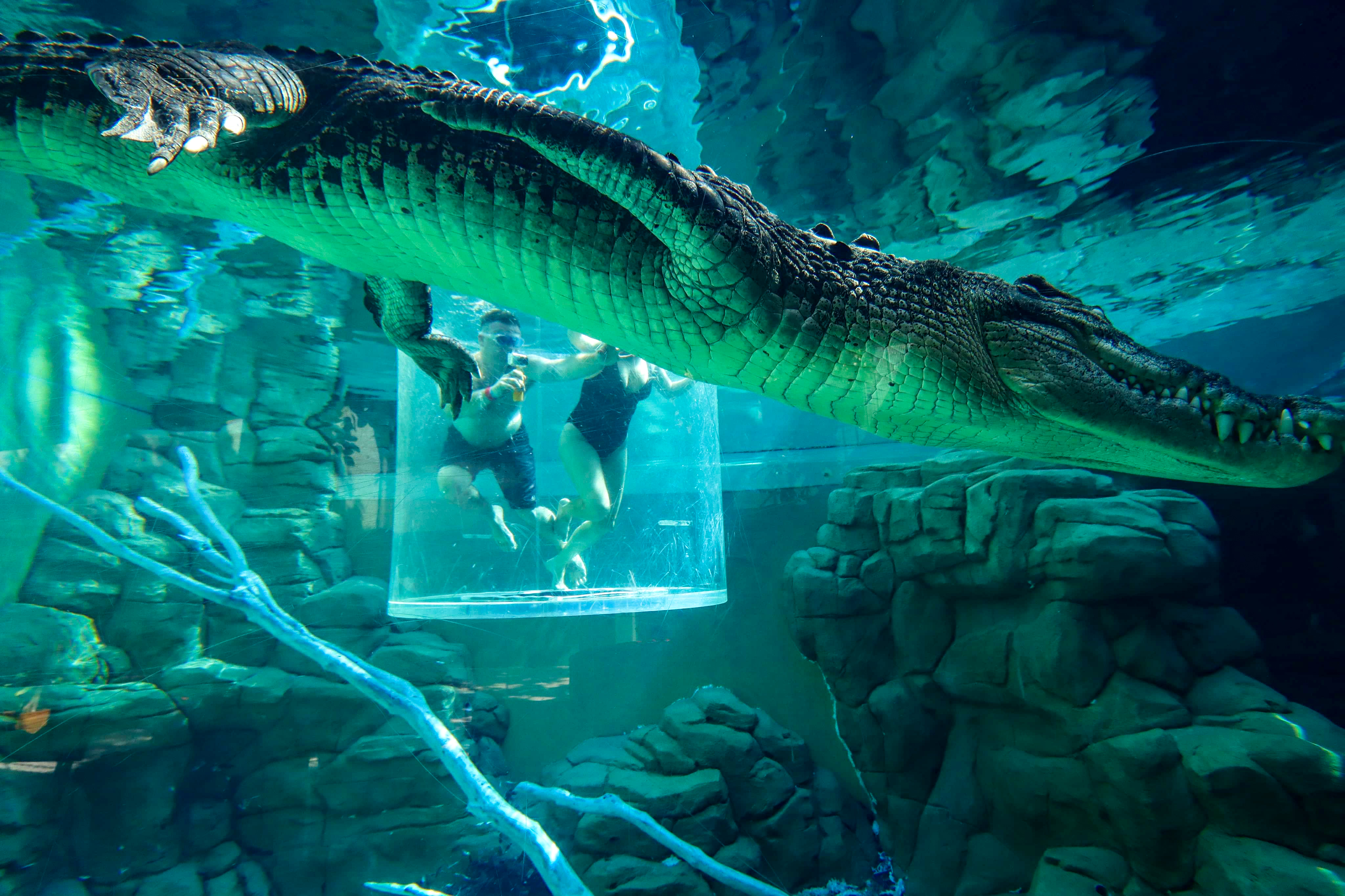 So last week we were in Darwin in the Northern Territory in Australia for a little New Year's getaway and we came across this place called Crocosaurus Cove. 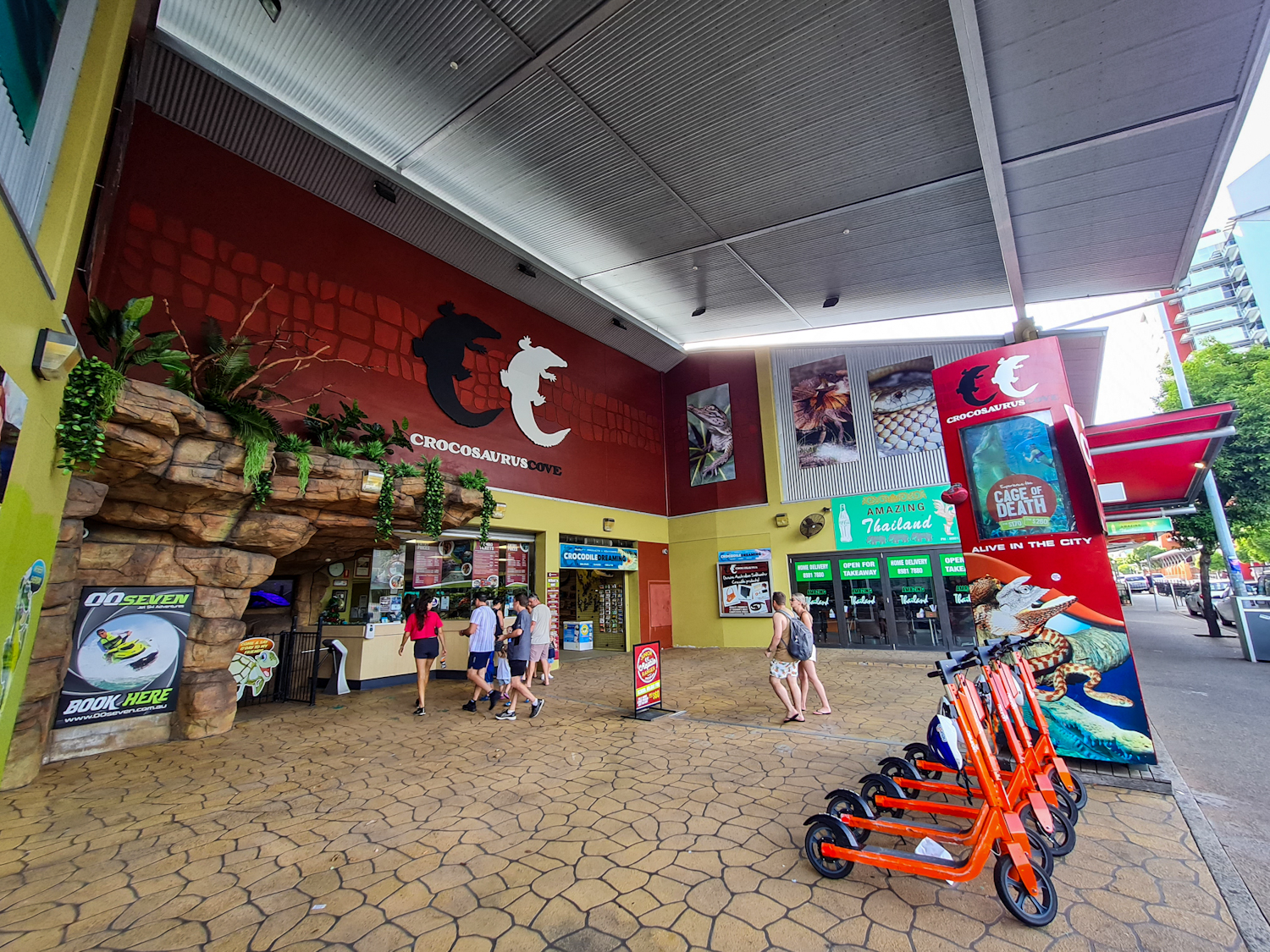 Now what makes this place special is that you can actually get into an acrylic tube and get into the water with these dinosaurs!!

What is the Cage of Death?

They call it the Cage of Death. Which the name is a bit misleading as it's not a cage and no one has actually died....
The tube is made out of acrylic which is 4cm thick and about 3 meters high. The tube is attached to a runner that spands over the four enclosures. Which lowers you and your friend into the enclosure with the crocodile's. 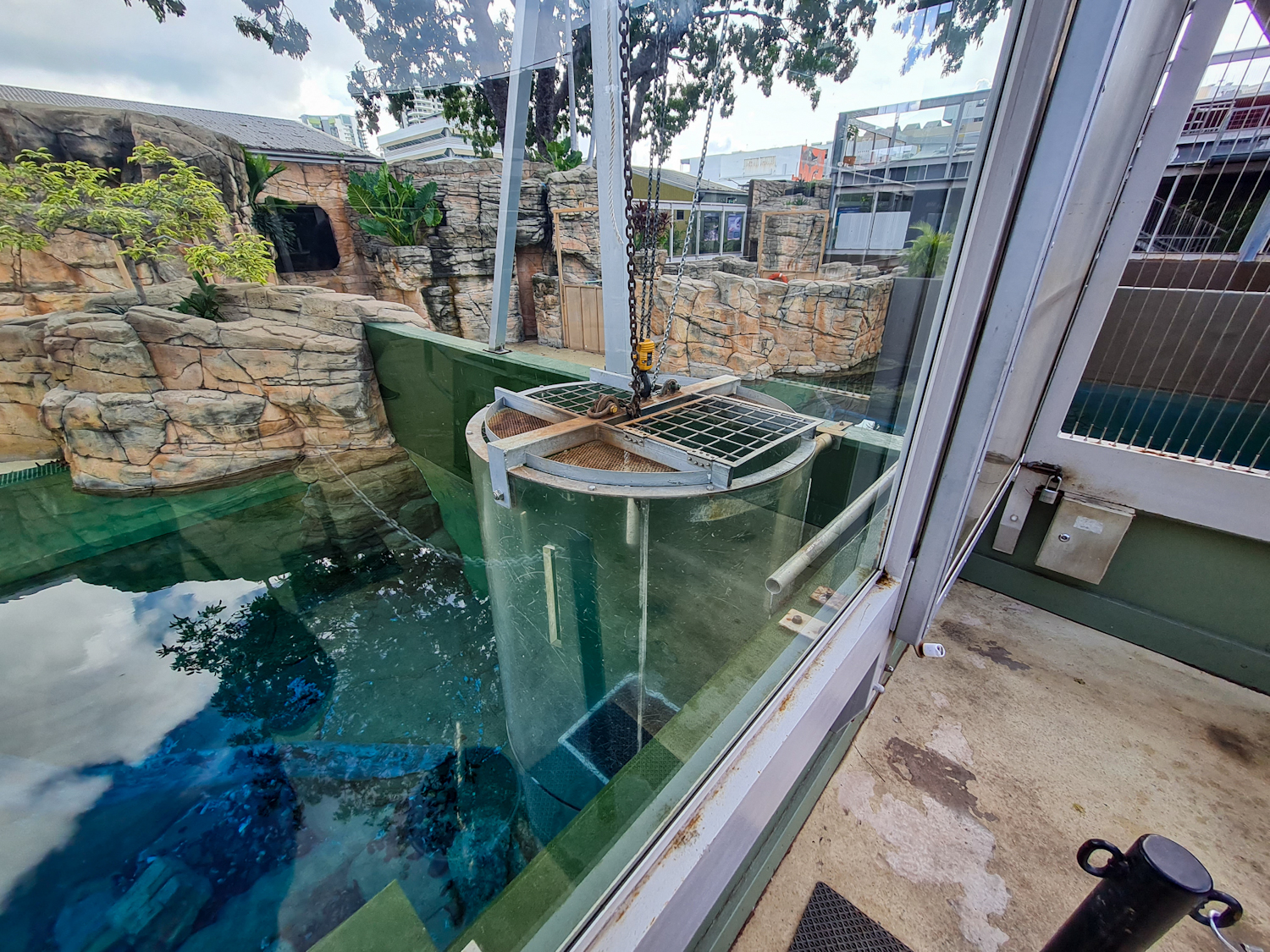 The cage mechanism has malfunctioned in the past and a tourist was stuck in the cage for 30min hanging above the crocodile pen. But this didn't deter us.

None the less it sure is a heart stopping experience once you enter the water with these 5.5 meter plus saltys!! 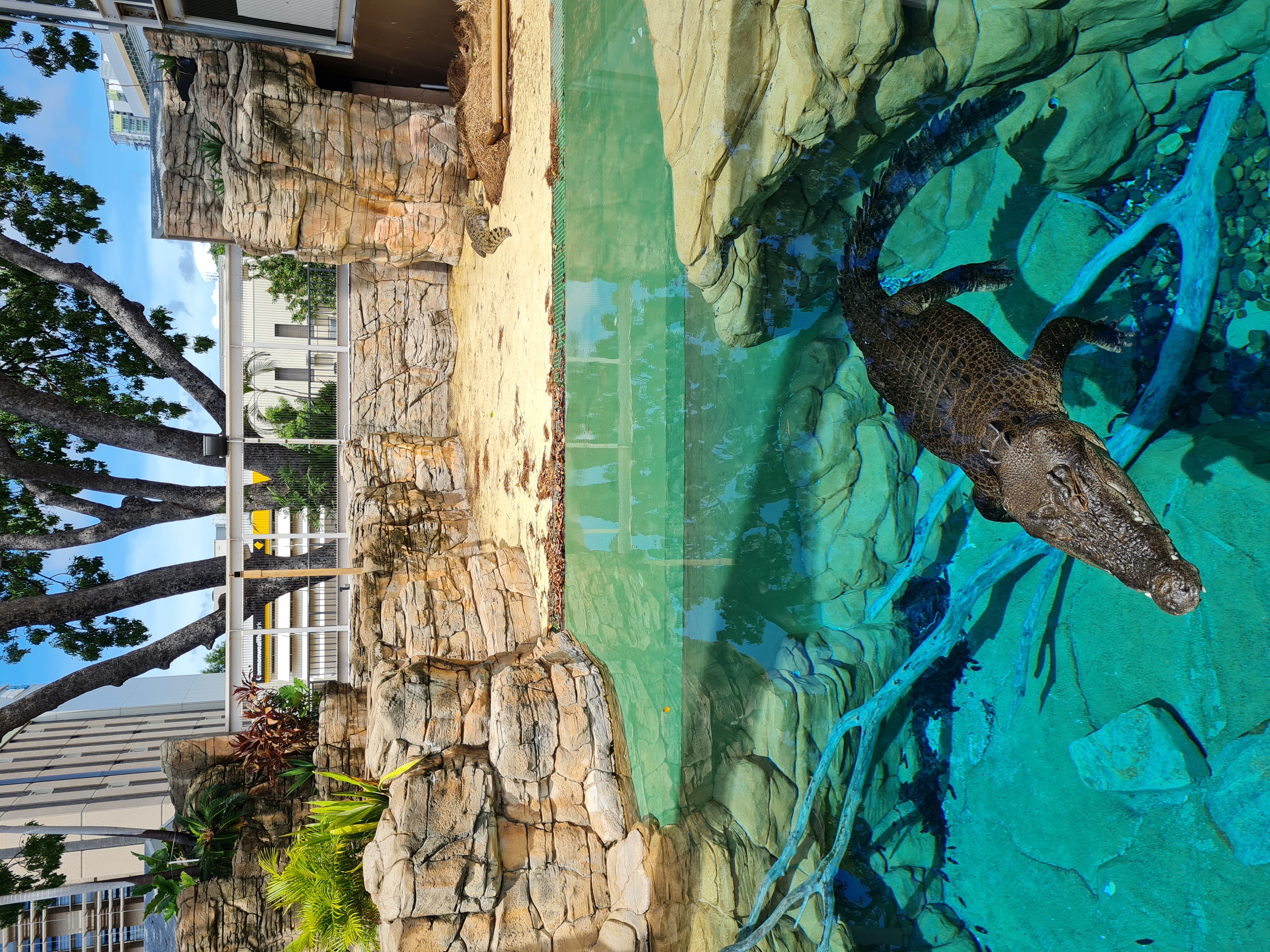 We were the first ones to enter the park. The crocs hadn't had breakfast yet... they wanted the cage in there... and make it snappy 🐊!!

We signed our life away and were ready for a once in a life time experience! To get face to face with a salt water crocodile. 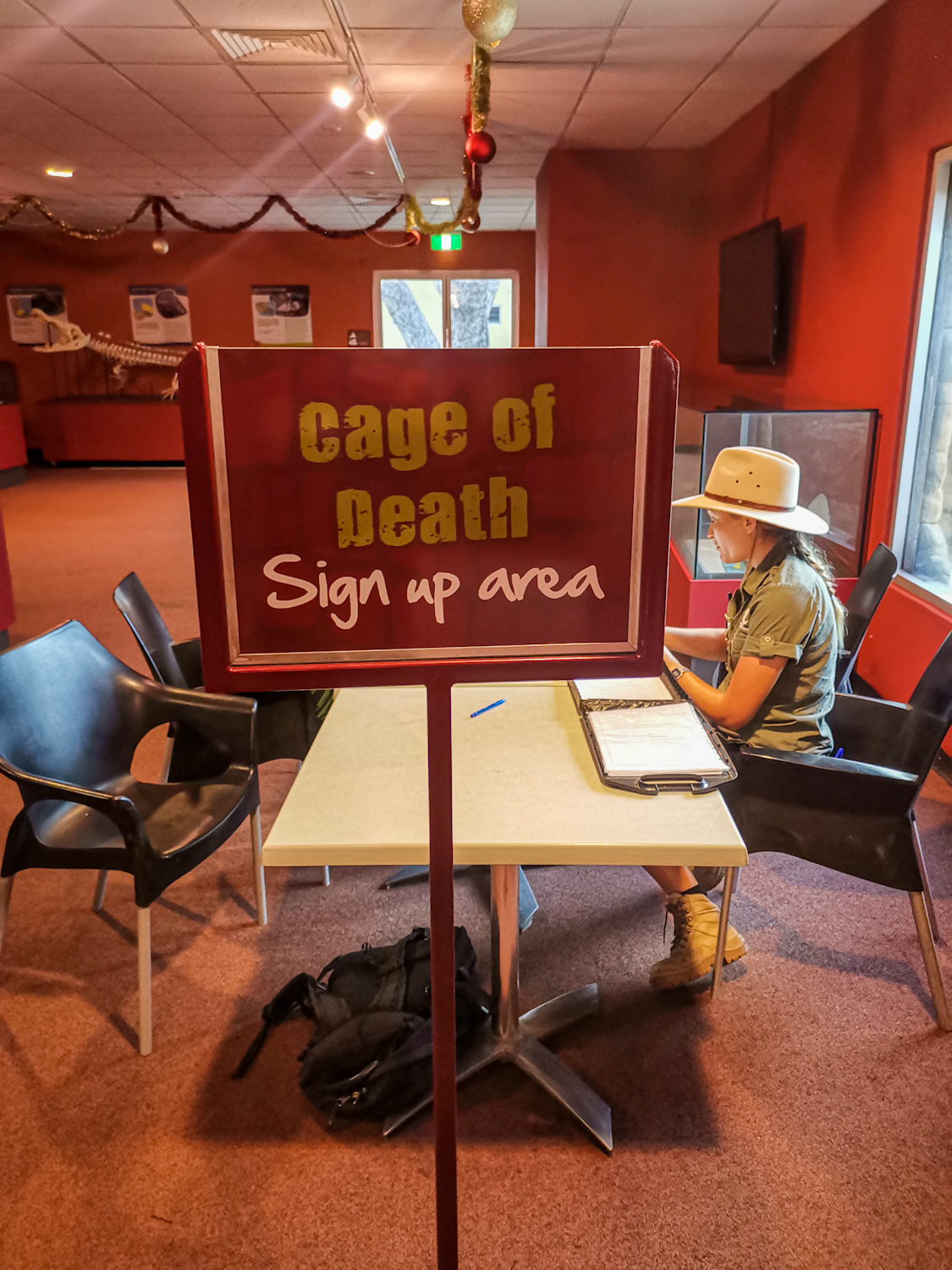 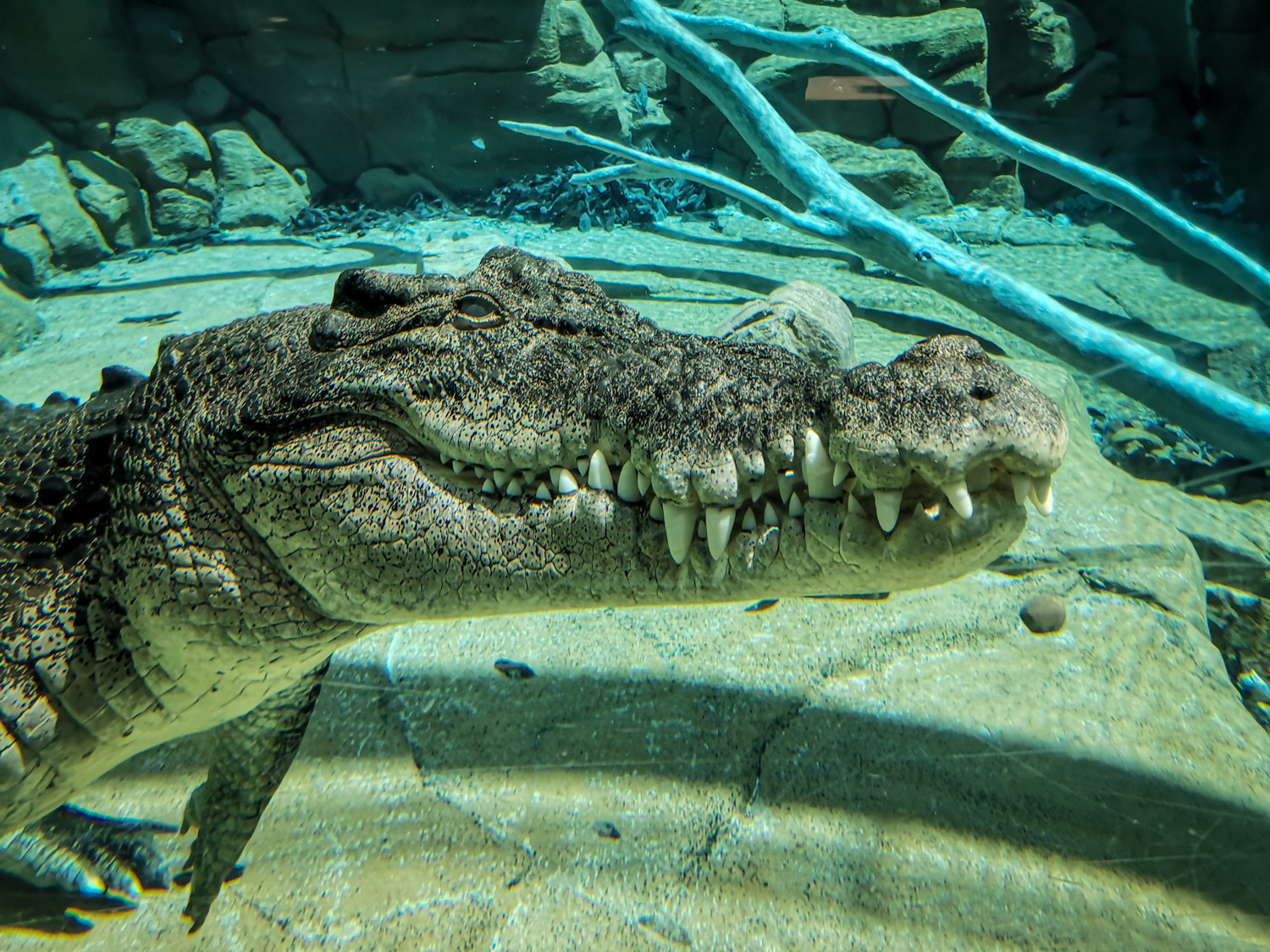 We got equipped with the state of the art water goggles. Then we were good to get into the tube. 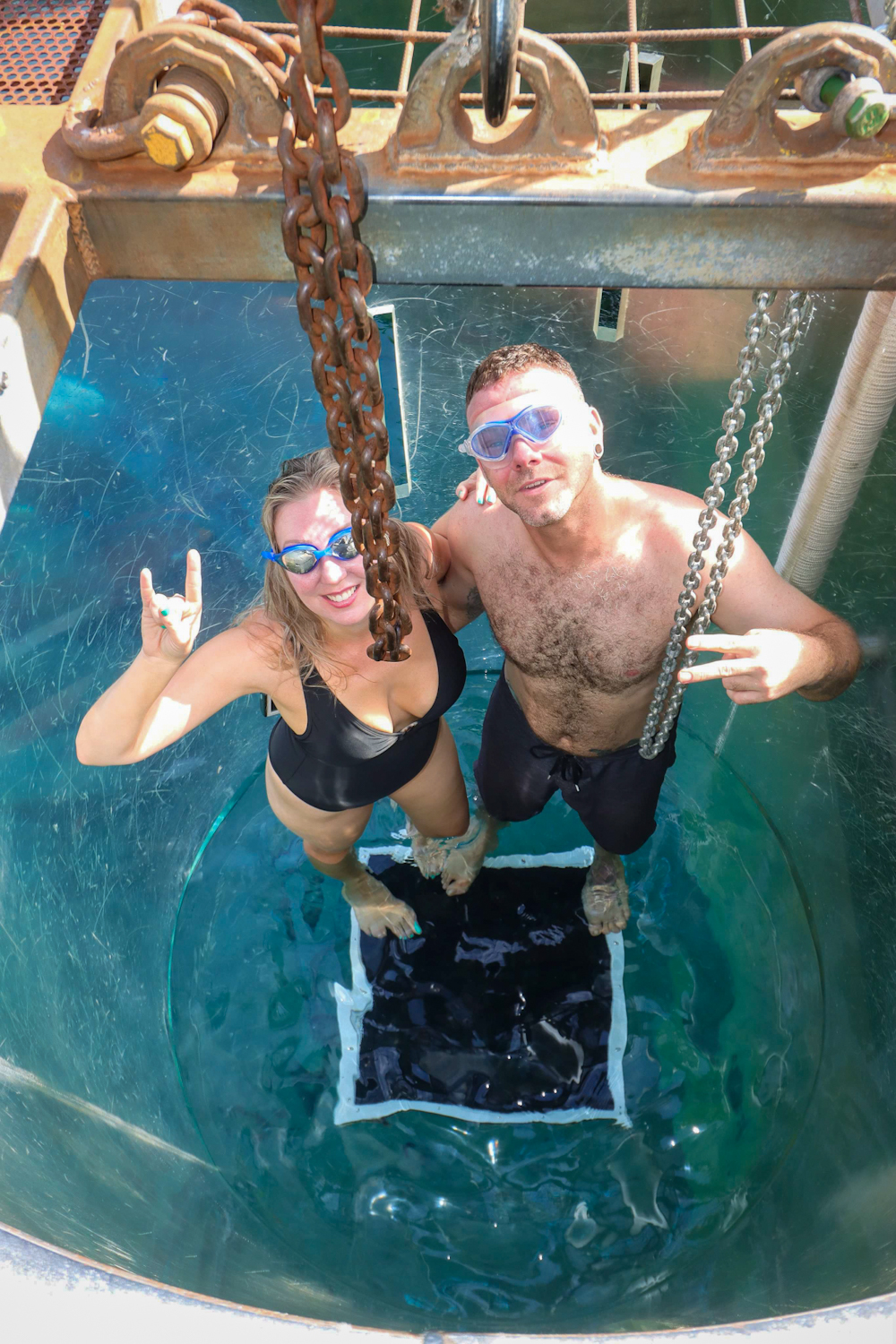 Inside the tube we had an emergency stop chain in case anything went wrong. At the bottom of the tube is a mesh which let's the water into the tube so you can submerge yourself inside the tube and swim.

They shut the gate on the roof and we were now in motion.

They manoeuvred us to the enclosure of Will and Kate. Think of it like a reverse giant skill tester with fresh meat inside (us) and in this version it's the toy (croc) that's interested in the claw (tank) haha. It's a super cool experience to see a croc this close up.

William shares his enclosure with his girlfriend Kate. Originally their names were Houdini and Bess but were changed to William and Kate to mark the royal wedding in 2011 which I think is pretty lame... The original names are way better!! So I'll call them by their OG names. 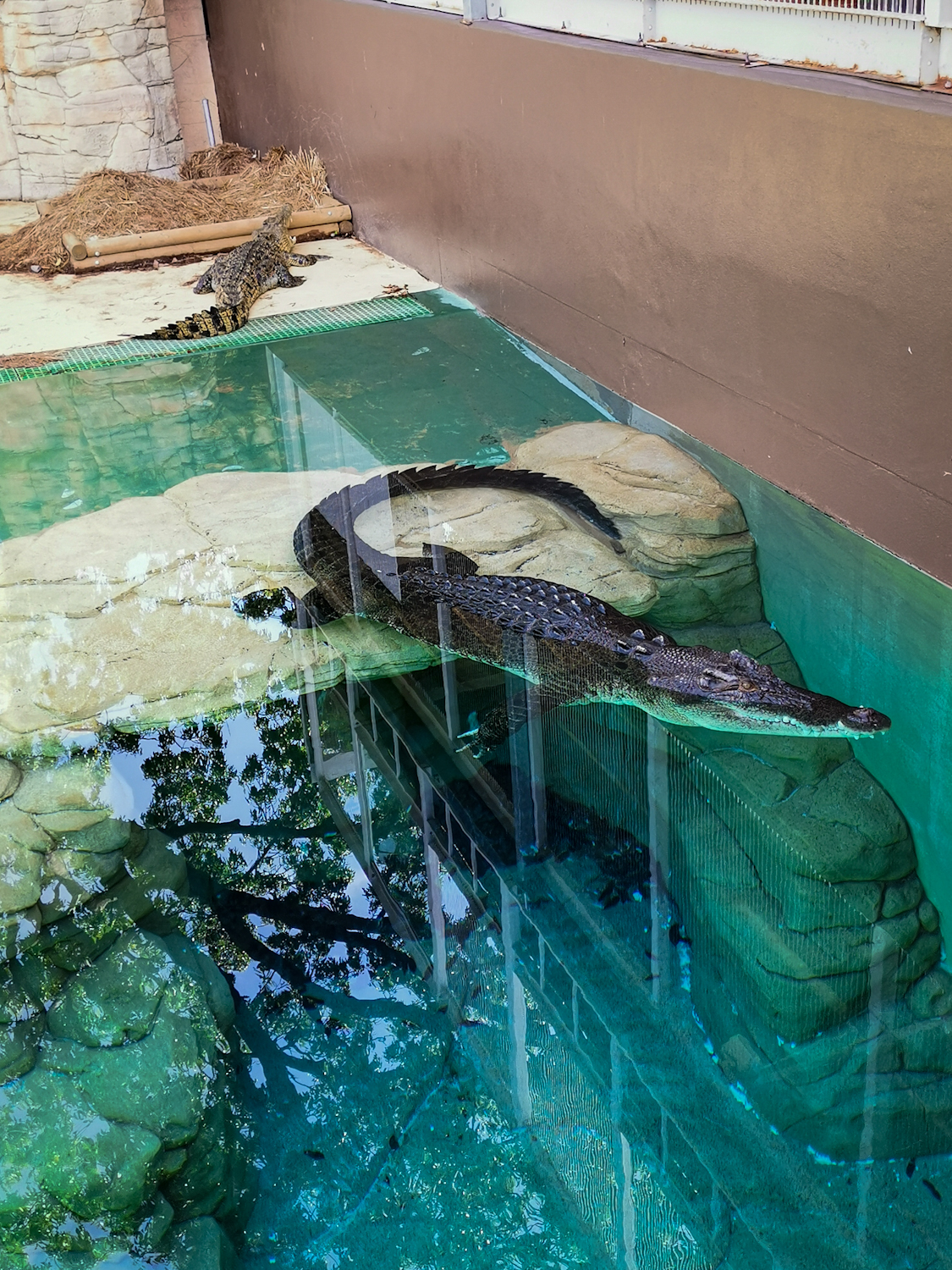 Houdini earned his reputation as an expert escape artist after climbing into multiple Croc traps and stealing the bait before escaping.
He continued to elude capture and was seen at the famous Mindil beach before eventually being caught at Elizabeth River.
He was then relocated to the Darwin crocodile farm were he continued to cause mayhem..
But like most wayward males it was a woman who would eventually settle him down.

Ever since he met Bess in 1991 he has stayed put. They now are a successful breeding couple and produce eggs every wet season. 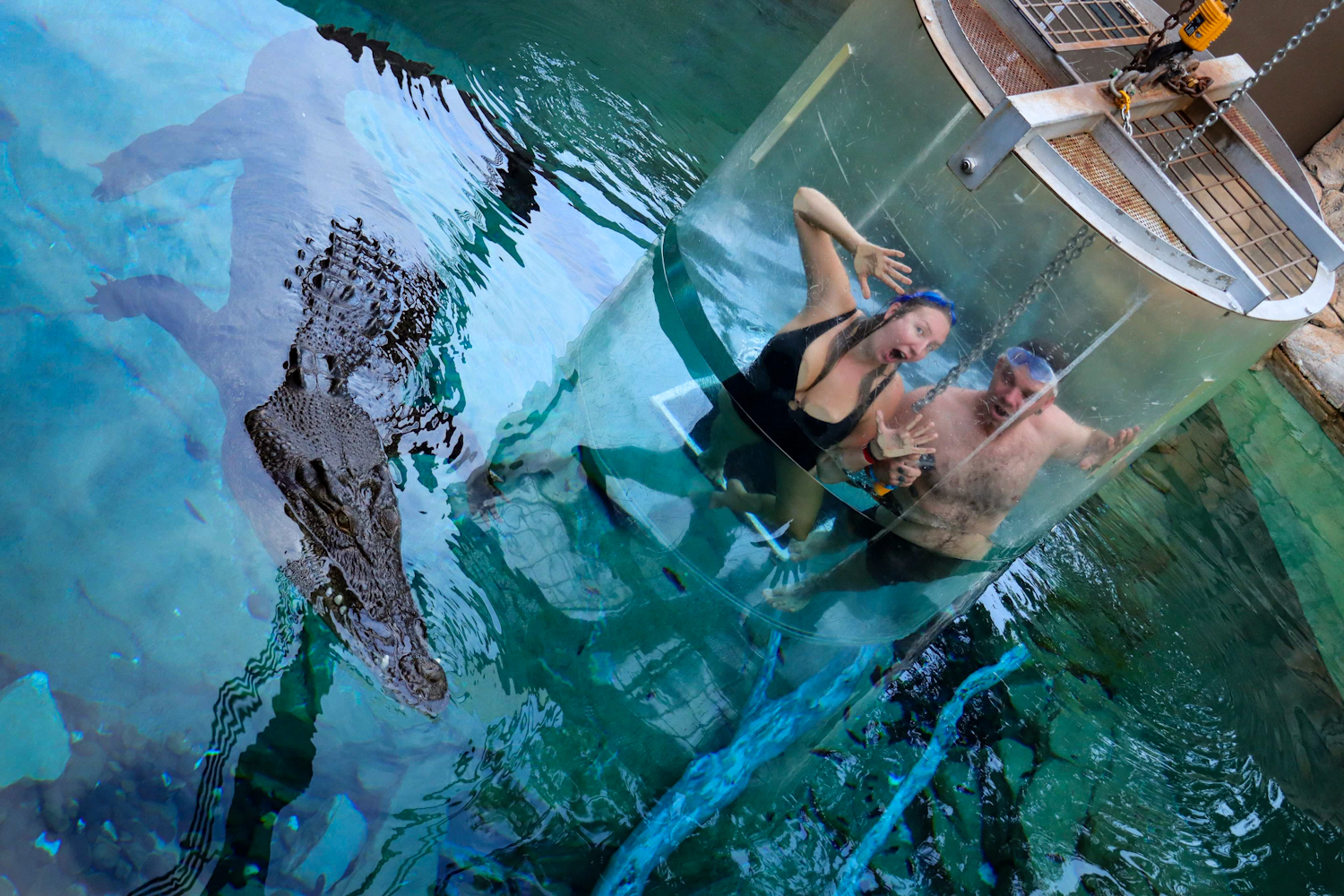 Now once we were lowered into his kingdom, he started circling the tube.The way he was staring at us through the acrylic was intense. You really get a feel for why they are an apex predator and have survived since the age of dinosaurs! 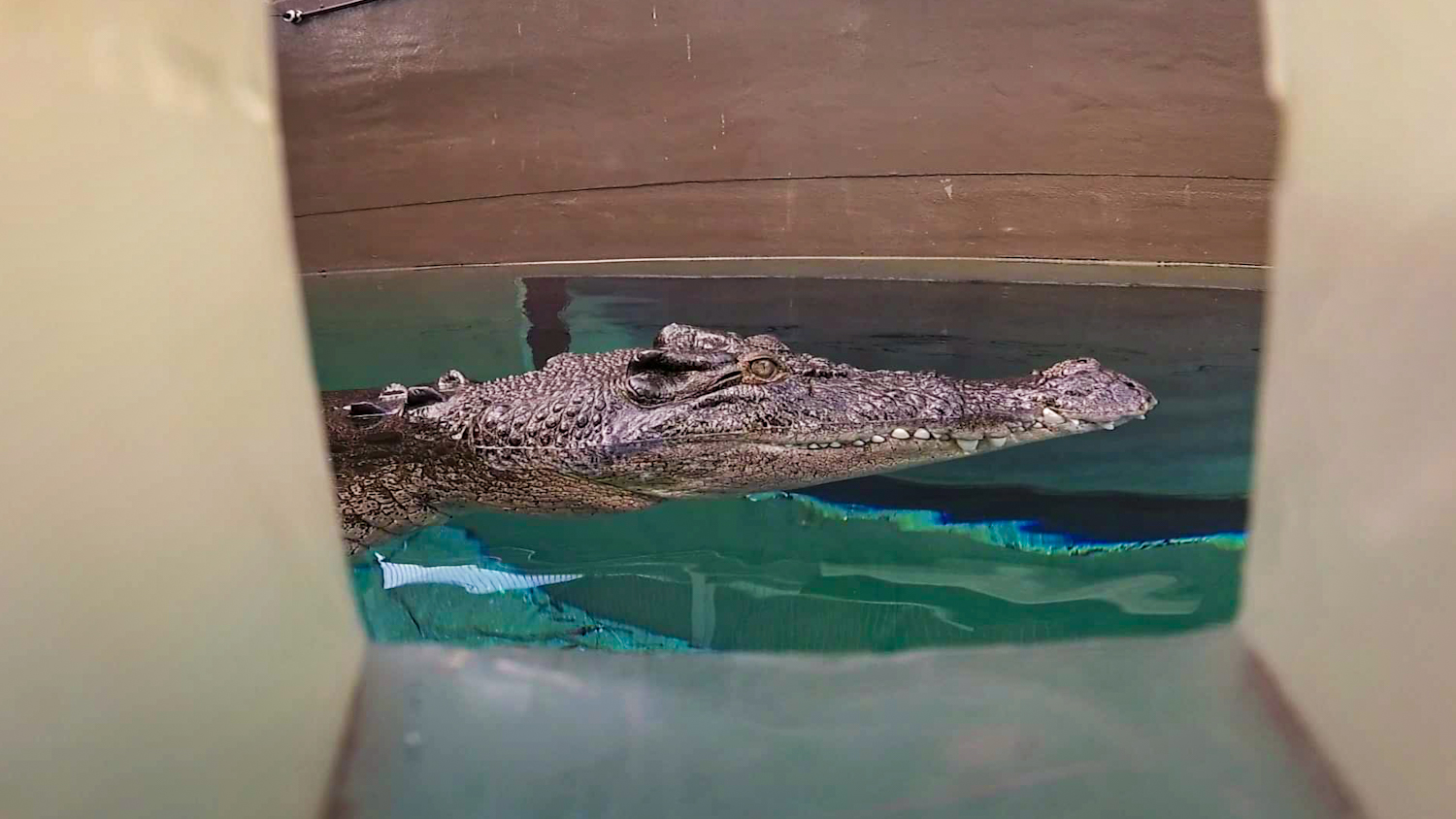 It was really cool to go under water in the tube and watch him swim around us. 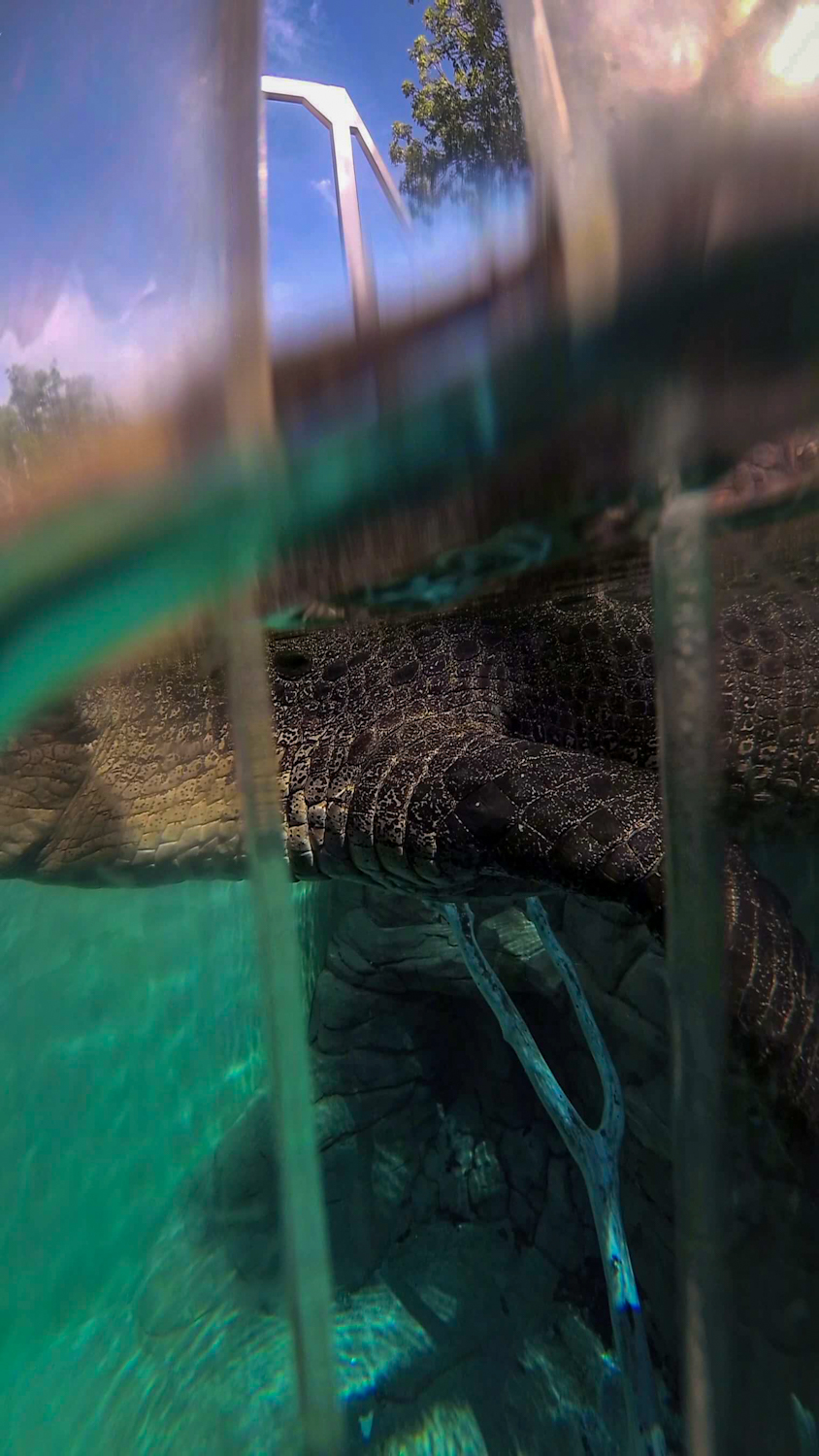 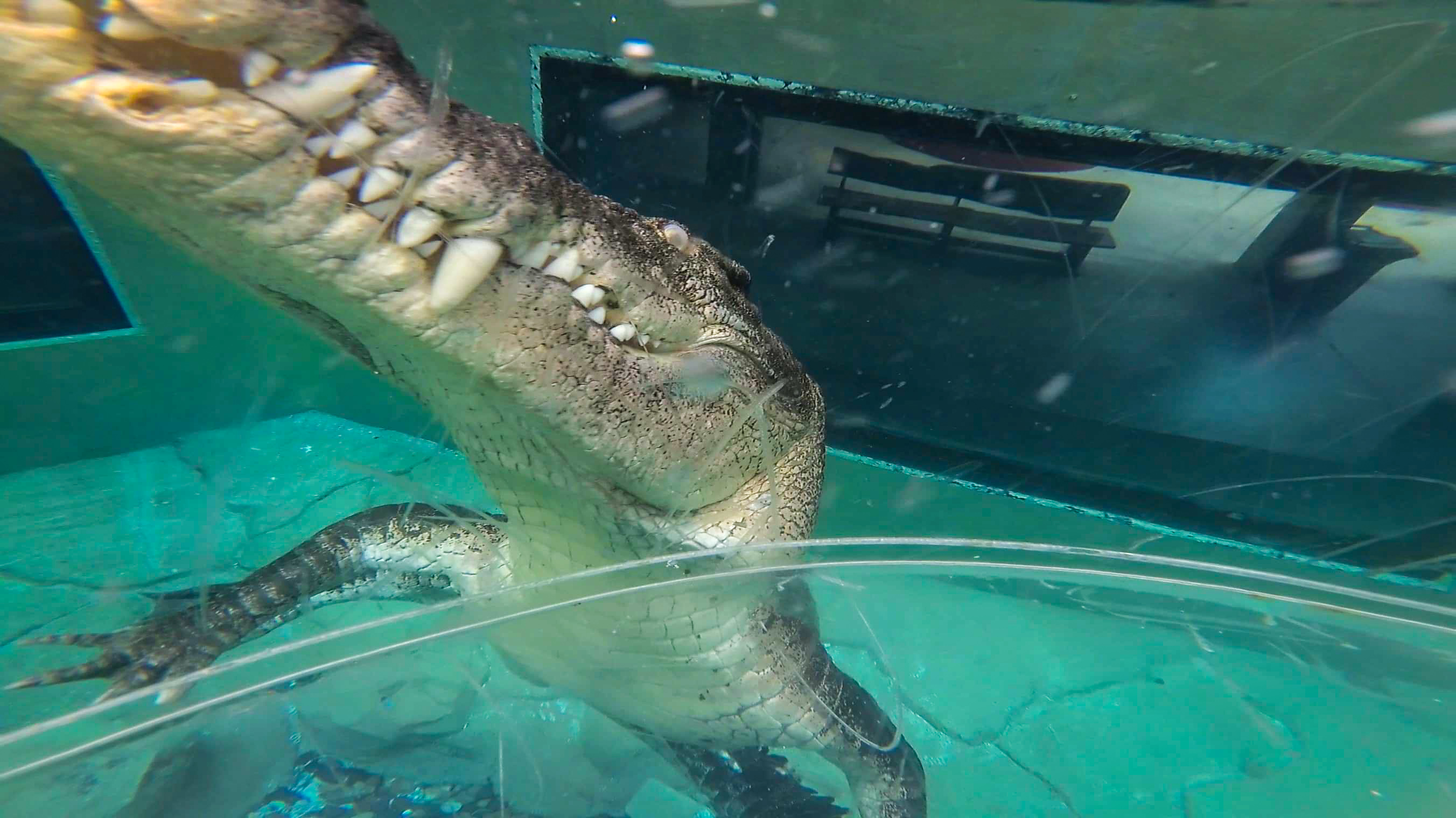 It was only Houdini that got in the water as Bess stayed next to her nest to guard her eggs. 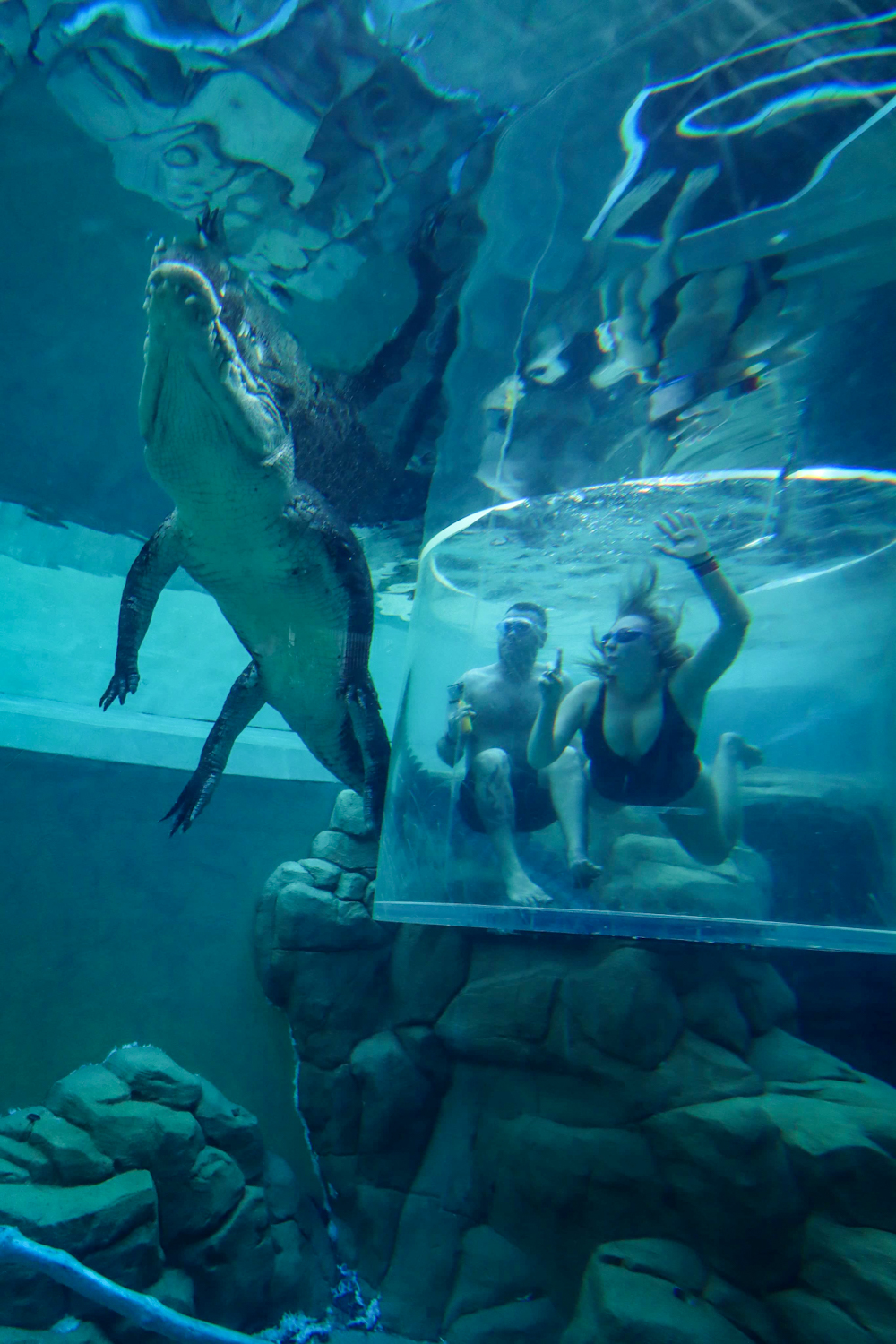 You spend 15 Min inside the tube which is the perfect amount of time. At the 10 minute mark it's FEEDING TIME!!

They dangle out a piece of chicken attached to a long pole and put it right next to the tube. 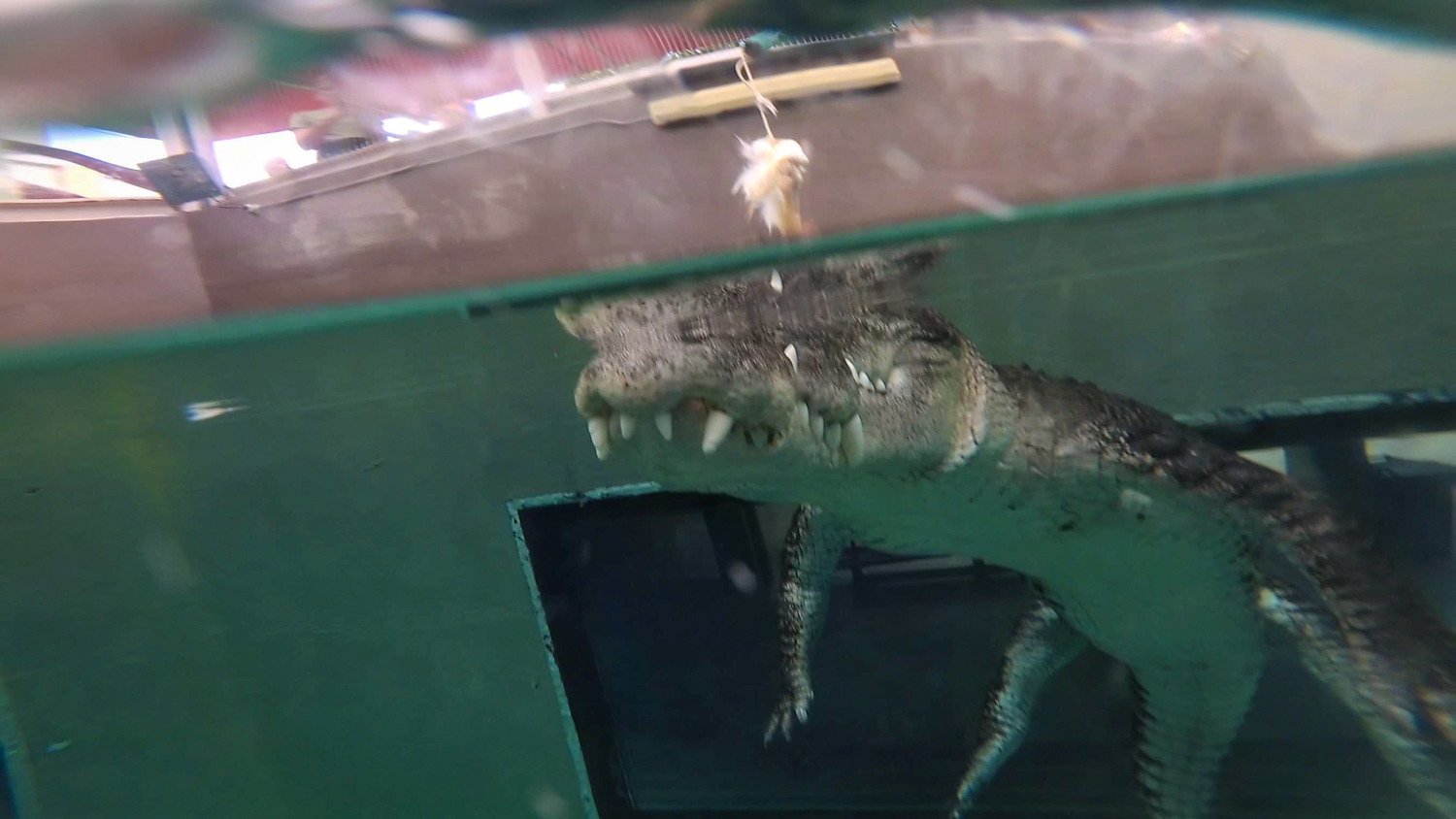 Houdini seemed to be more interested in what was inside the tube for breakfast than the little piece of chicken. 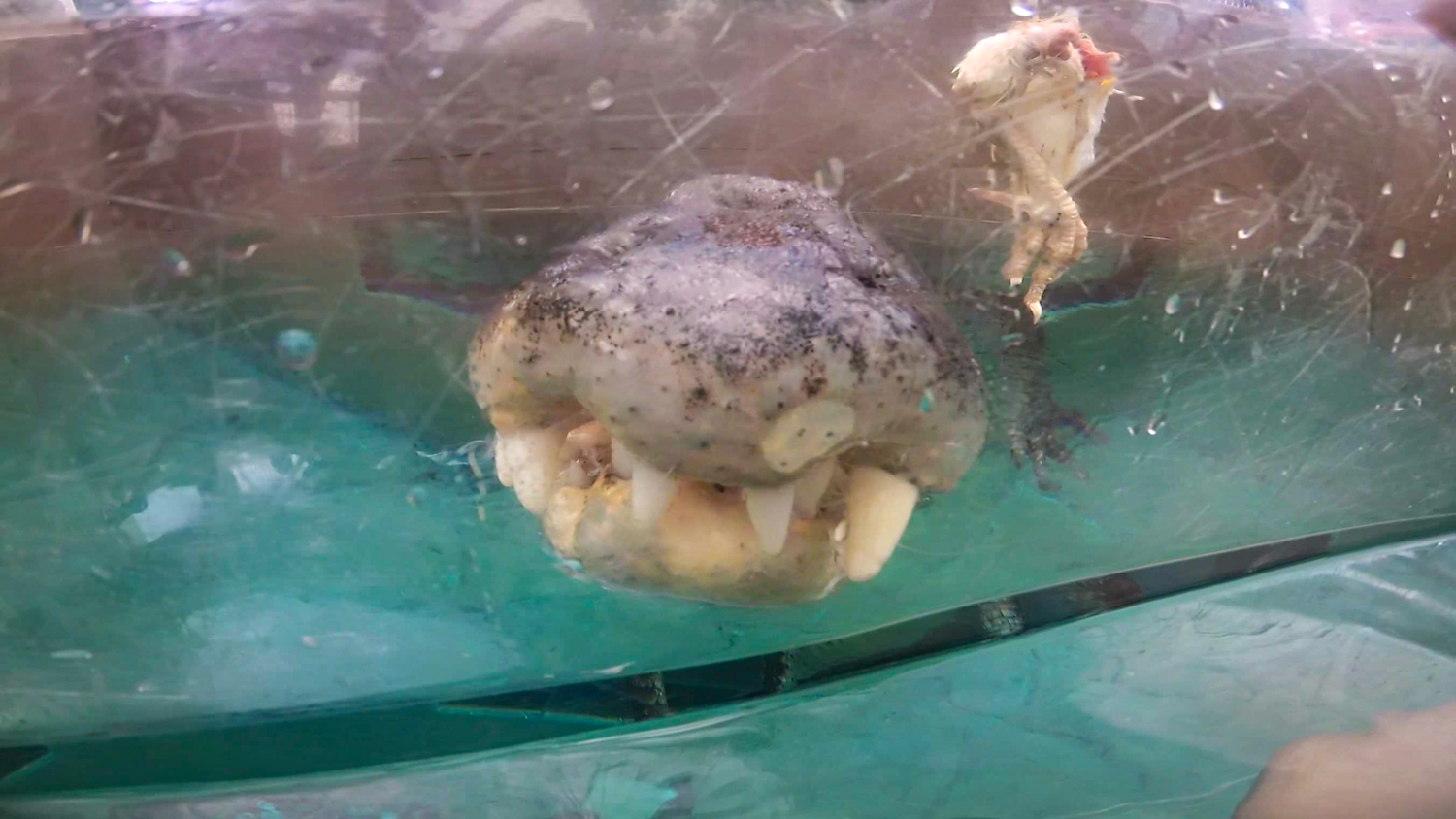 Eventually Houdini fell for the bait and slowly stalked the peice of chicken then all of a sudden SNAP! He launched at the chicken and snapped his jaws shut with over one tonne of pressure, which made this loud popping sound. 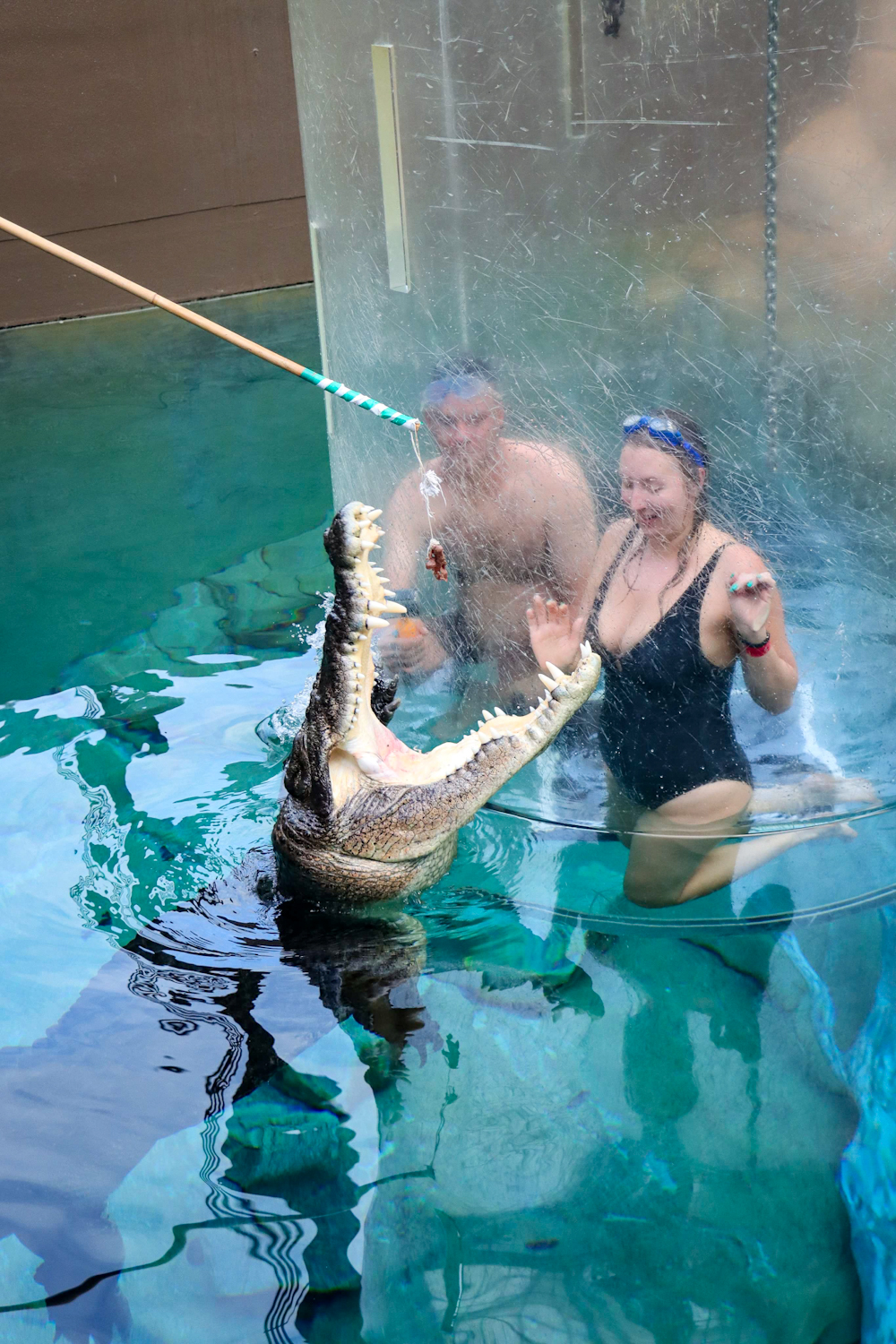 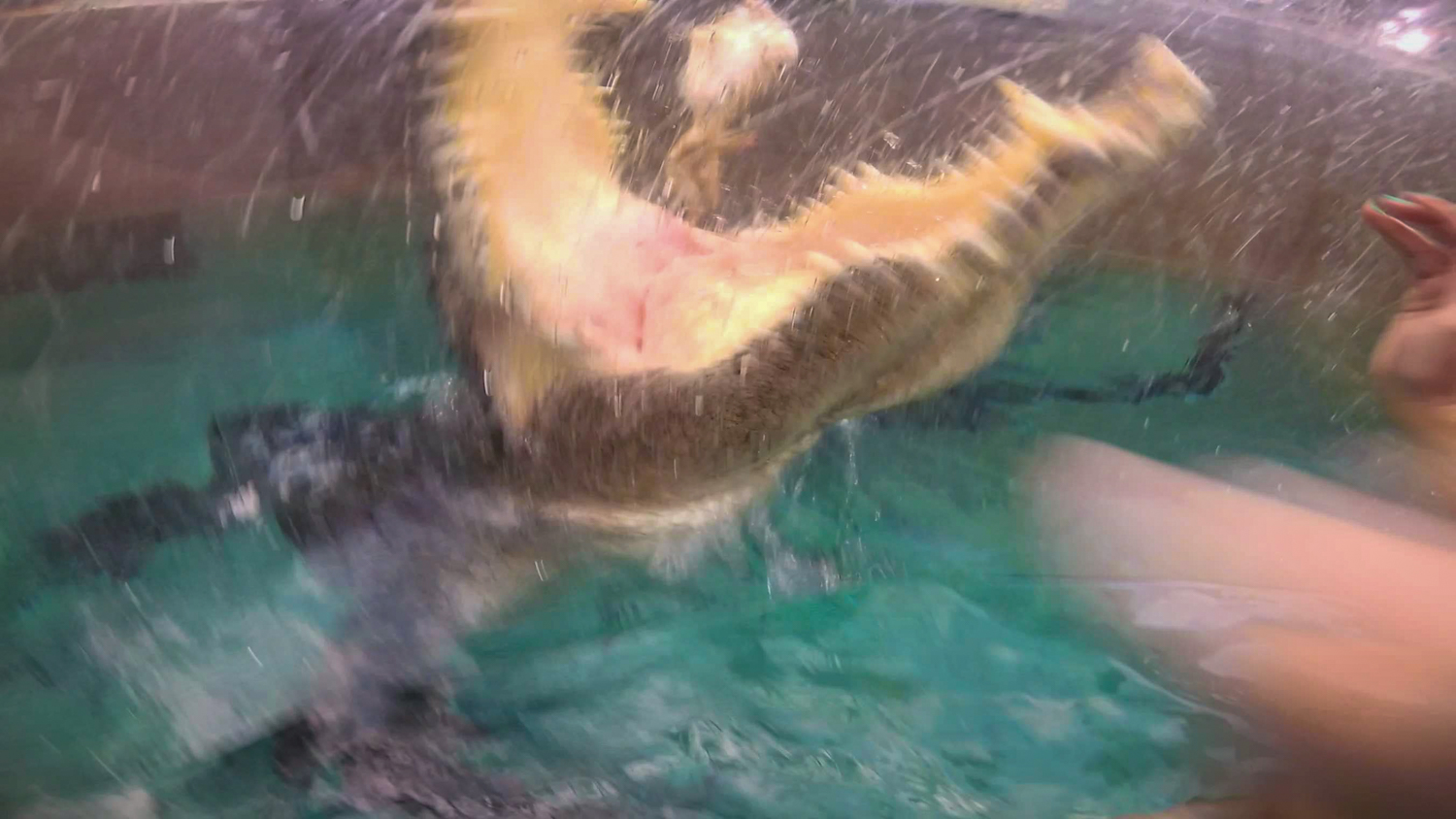 Man that was intense!!

He missed his breakfast so he went for a second try right up against the tube. As he attacked the chicken leg we both jumped back in fright. This time he left a huge scratch on the tube. I wonder how often they have to replace these tubes as it was pretty scratched up. 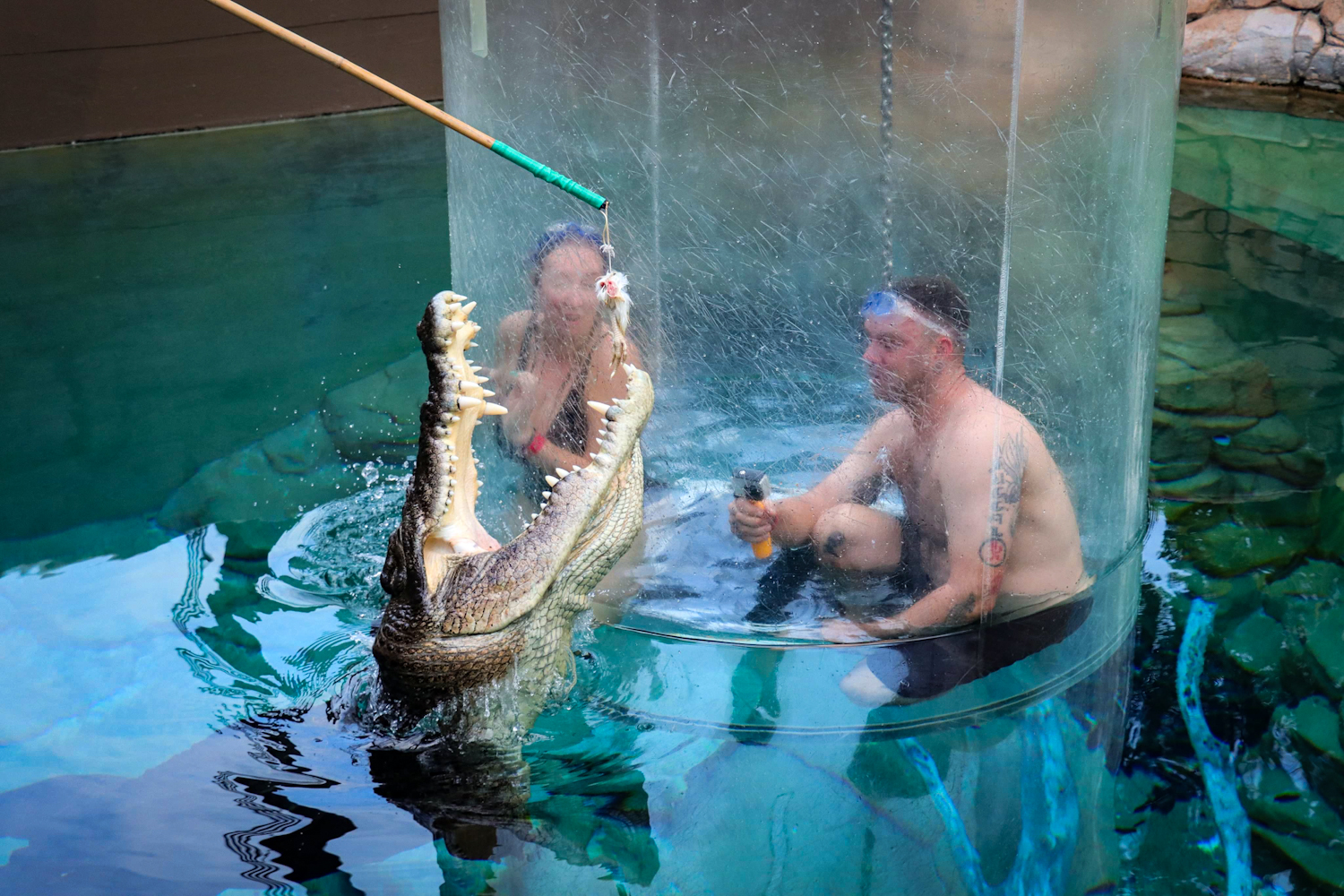 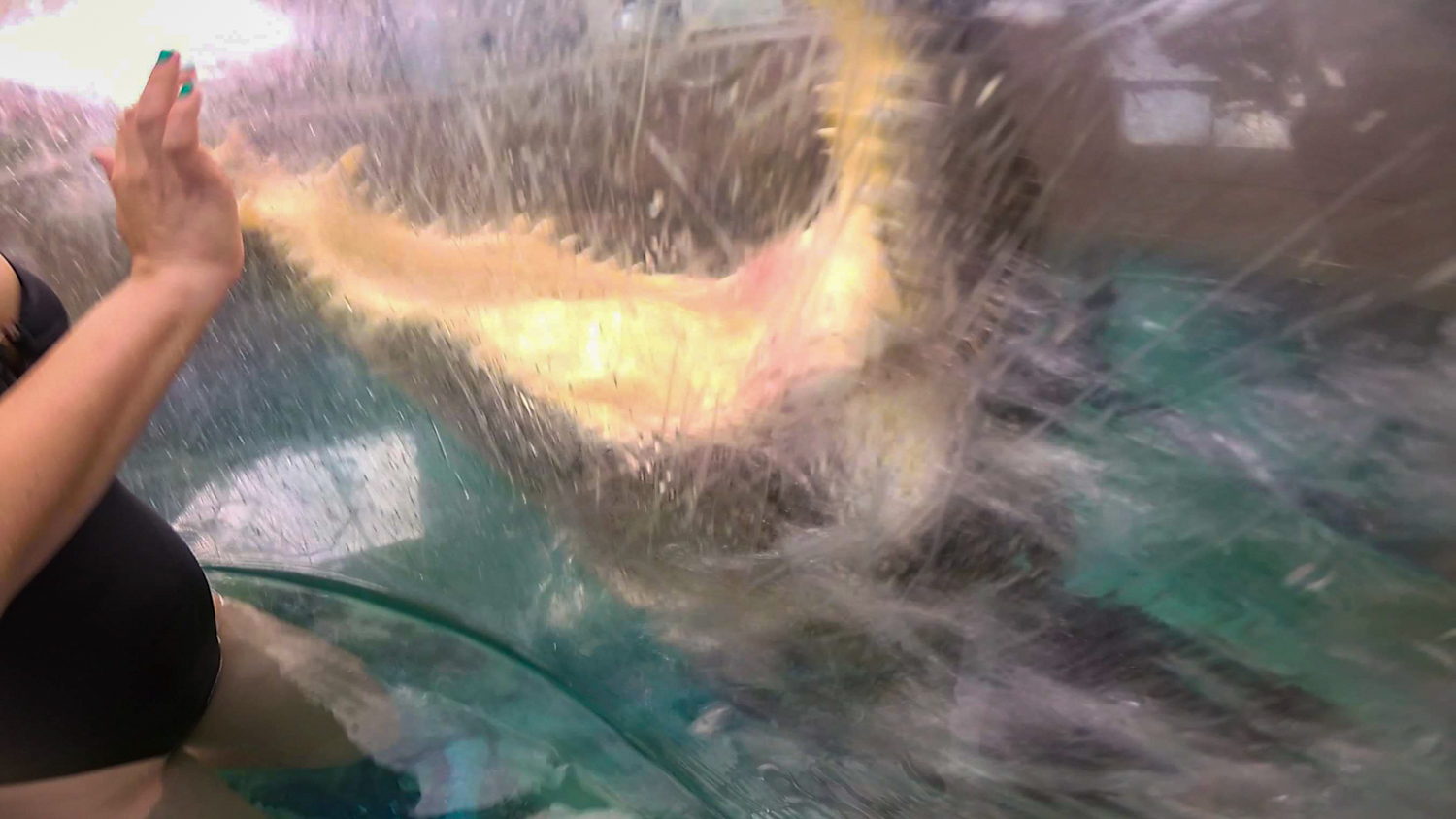 A couple more snaps and he had a full tummy and our cage of death experience was over. 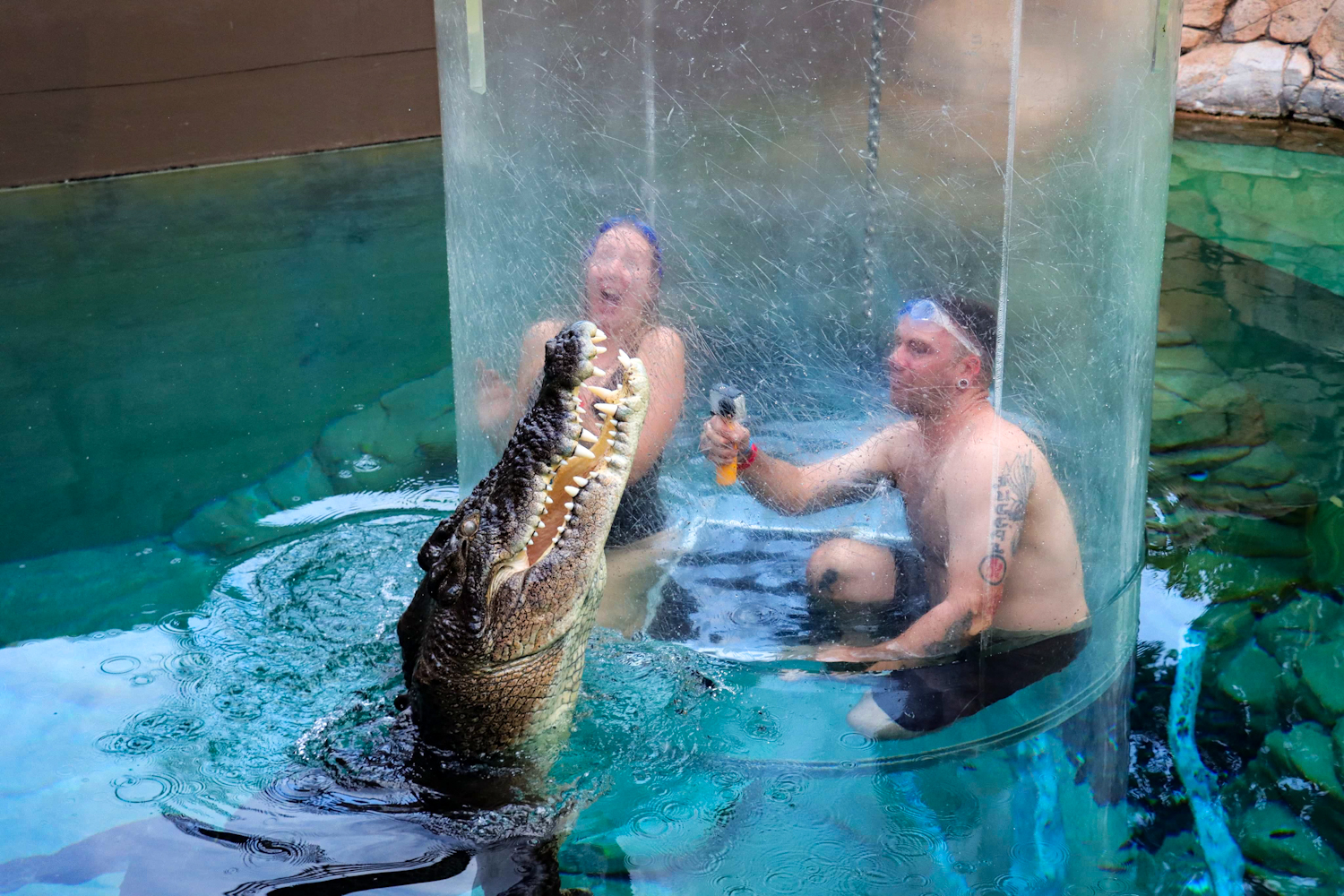 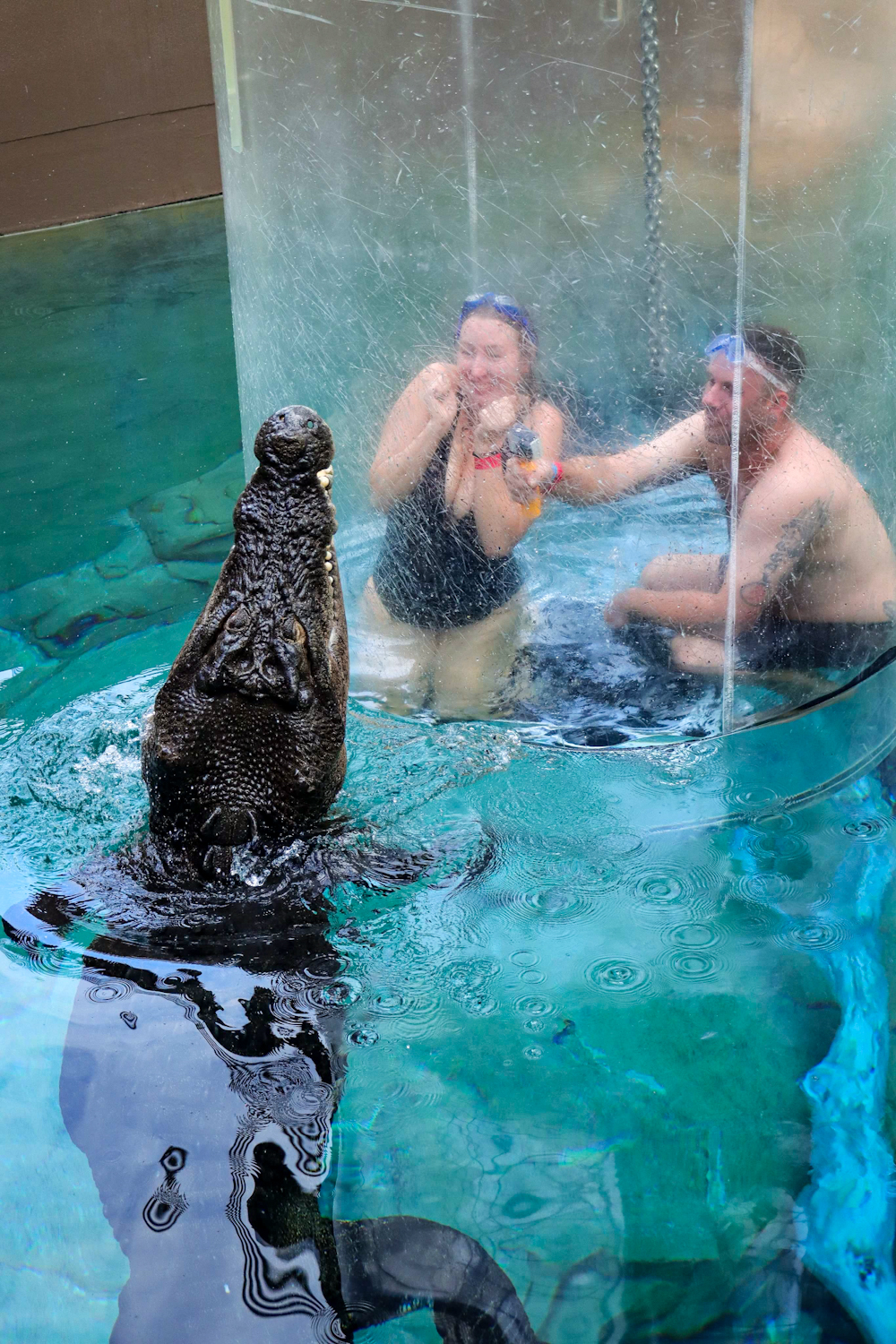 We were raised out of the water and over the other enclosures. When we were in place, they opened up the cage roof and dropped the ladder down so we could escape.

Wow this sure was a once in a life time experience. It was crazy to get so close to a crocodile! 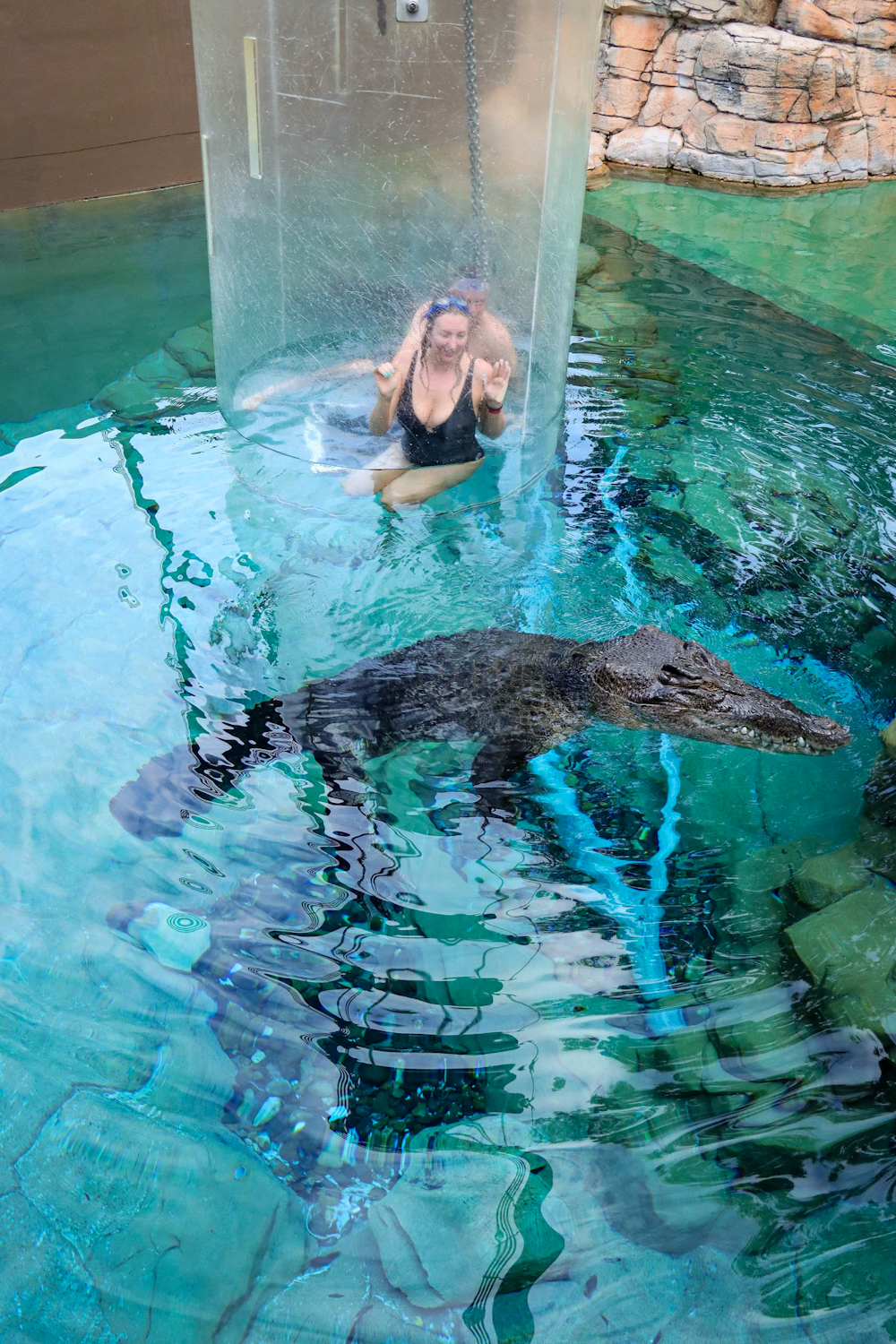 Where is the Crocosaurus Cove?

You will find it in the centre of Darwin in the Northern Territory in Australia on the nightclub and restaurant strip of Mitchell Street.

How much did Cage of Death cost?

I'll upload a video soon from our experience. For more of our travels check out our travel blog.
https://www.fourwornsoles.com/
Thanks for stopping by and happy travels 🐊😊👍

Hiya, @ybanezkim26 here, just swinging by to let you know that this post made it into our Top 3 in Daily Travel Digest #1082.

Awesome thank you very much 😊

Crocs are so intimidating and this was a great way to get close to one!! I have mad respect for them being an apex predator but would never want to get this close to one in the wild!!! 🐊🐊🐊🐊

That's for sure! I would never get this close to one in the wild!

i love watching or reading about them, but to dare get close like this will give me a heart attack hahah salute to you guys for being so brave 😍

Yes seeing them like this is a lot safer than seeing them in the wild that's for sure!!
Crocodile’s have always scared me so this was the best way to over come my fear haha