Wednesday is New Comic Book Day at comic books stores...uhm...not right now of course, but it will be again soon. So back we go to find worthwhile older stuff to read! 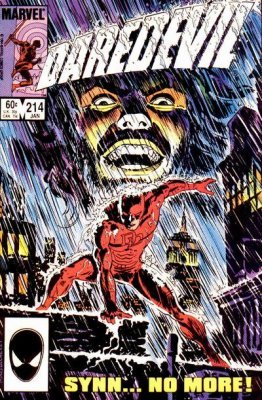 Daredevil is a character and premise that does not deserve to be as consistently good as it has been. He was, up until the netflix series, a second string character that sold enough books, to warrant making more books, and that's about it.

His costume was stupid and boring at the same time, his powers were hard to explain and seemed to change as the series went on. and when he wasn't a so-so super hero, he was a blind lawyer...which is about the WORST idea for a secret identity of a character, if you want kids to read about him.

Spider-man was a teenager and a photographer, Batman was a millionaire, Iron Man was an inventor...Daredevil was a blind...lawyer.

I don't know if the book is just charmed, or the universe decided the stars will always align for it to have great talent on it, or if it's a matter of the character being so ridiculous that the creative teams always bust there ass to do the best work they can in order to make up for it.

Whatever the case, unlike any other Marvel Title I can think of, Daredevil is a series I can not just pick one good era...because I can not think of a bad one. While most monthly books by Marvel have their peaks and droughts, it seems every era I have read of Daredevil was solid.

I have NO particular affinity for the character. As a kid I would pick up an issue here or there because it seemed to come out on week when there wasn't much else worth picking up, and it was always worth the money. It was a childhood version of a blue chip stock. Solid, reliable. And it seems to have been that way since 1963. From writer to writer. From illustrator to illustrator, always simply solid work.

At many points throughout my life I've picked up an issue, sometimes new, sometimes out of a bargain box, read it and thought "awh fuck, now I have to track down that whole story-line".

The first issues I read where around this era, 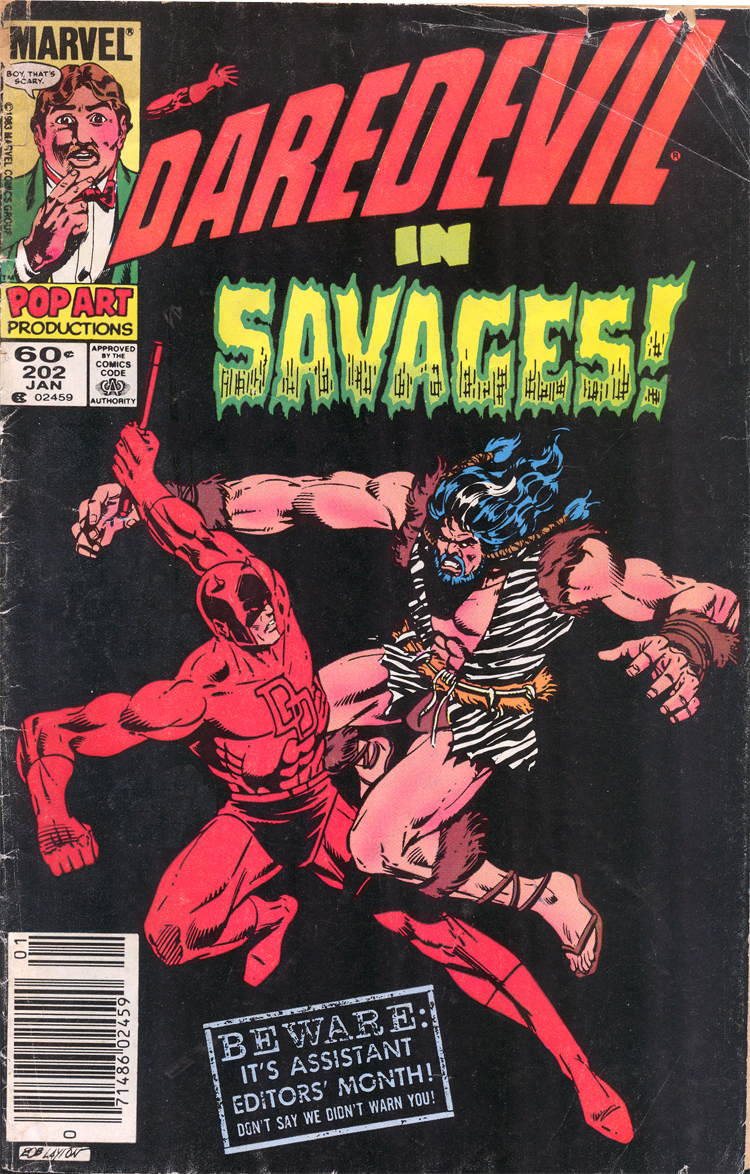 and most of the illustrated by David Mazzucchelli. 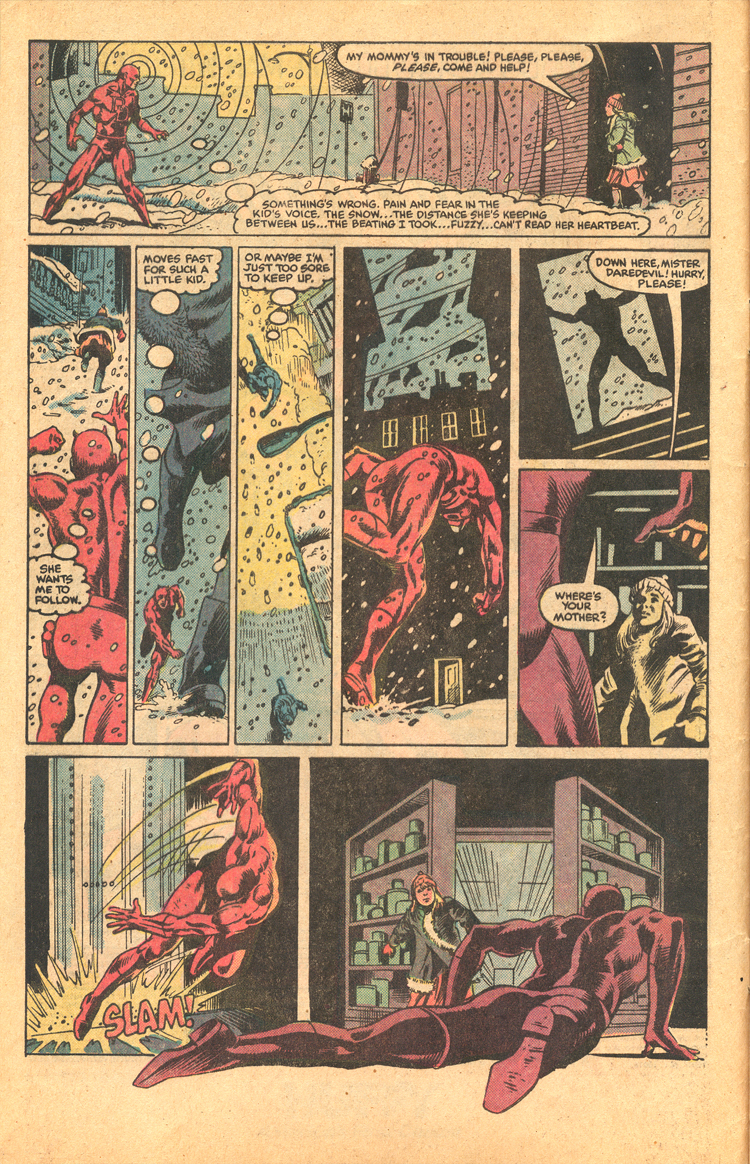 Was that guy good or what!? Get a load of some of the technique going on here... 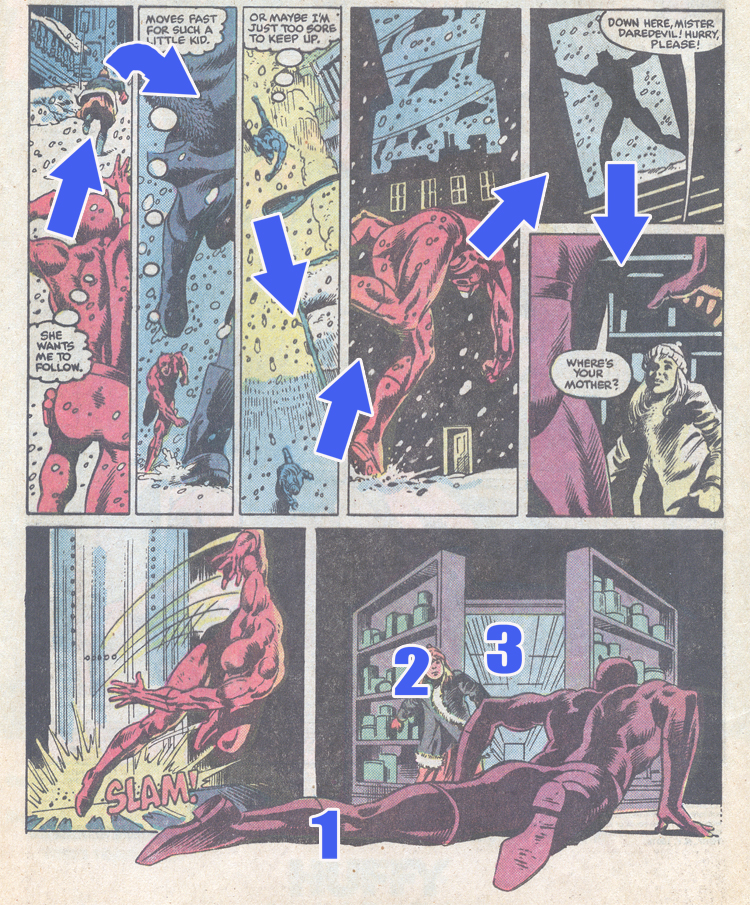 Daredevil's body language and implied movement leading your eye up the panel, the girl transitioning you into panel two and she then sends you across to panel 3. the overhead chase in panel 3 goes straight down the panel, where right next to it in panel 4 Daredevil's boot draws you right back up...and so on.

And that last panel with three distinct levels of depth (Daredevil himself, the Girl and the opening in the wall) expertly done.

During this time frame ( issue 202-217 or so) , you saw a lot of Kingpin and also an evil-ish, anti hero-ish Tarzan-ish character called Mach Sinn and a handful of international terrorist types mostly from the IRA. It sounds like a clusterf*ck, and it was a little bit...but it was also exciting, and it was good enough that I re-read what I still own of it from time to time.

Time passed, I picked up Daredevil consistently as it was closing in on it's 300th issue. and that was a really good run that could very well have been the ground work for much of the Netflix series. 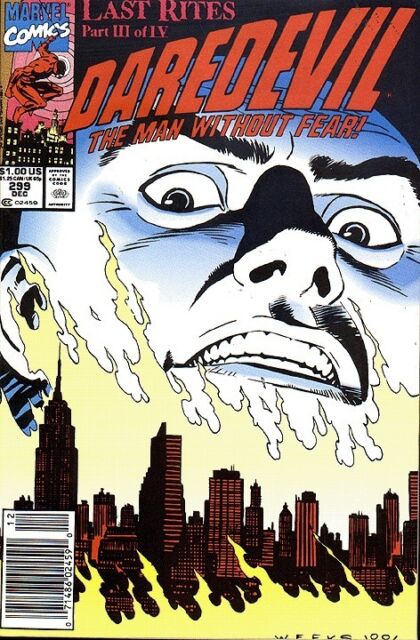 Kingpin on trial, the Punisher shows up, lot's of secondary bag guys running around. I'm a sucker for stories with secondary bad guys. Those low level types who are too powerful for street crime, but not smart or savy enough to ever get anything major running on their own. Your Taskmaster, your Owl, your Jigsaw, any story where you get a little of their perspective I always find really great and a bit charming, especially when they interact with each other. A Doctor Doom and Magneto interacting is more of a high brow power struggle, not nearly as interesting as two low level guys who both know they are pawns, getting on each others nerve while trying to pull off a job.

Time passed and I picked up this issue just because the cover was so beautiful. 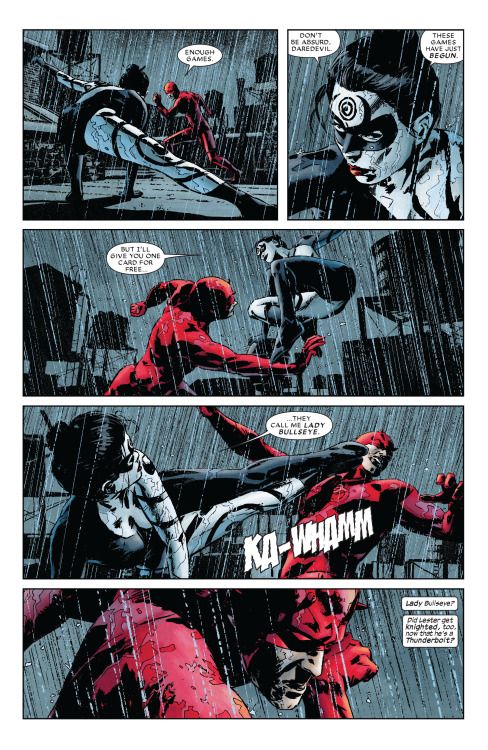 The inside was just as good, and the story was even better. Murdock's life is a mess, pretty much everyone who bothers to think about it knows he's Daredevil, and the crime organization "the Hand" is putting him through the ringer with a mystery woman "Lady Bullseye" as the tip of the spear.

There's about a years worth of other story lines before this and after that are by the same creative team who are top notch. Luke Cage, Iron Fist, Kingpin and Mr.Fear all have roles to play.

There's also an era where he was teamed up with the Black Widow, illustrated by Gene Colon-- 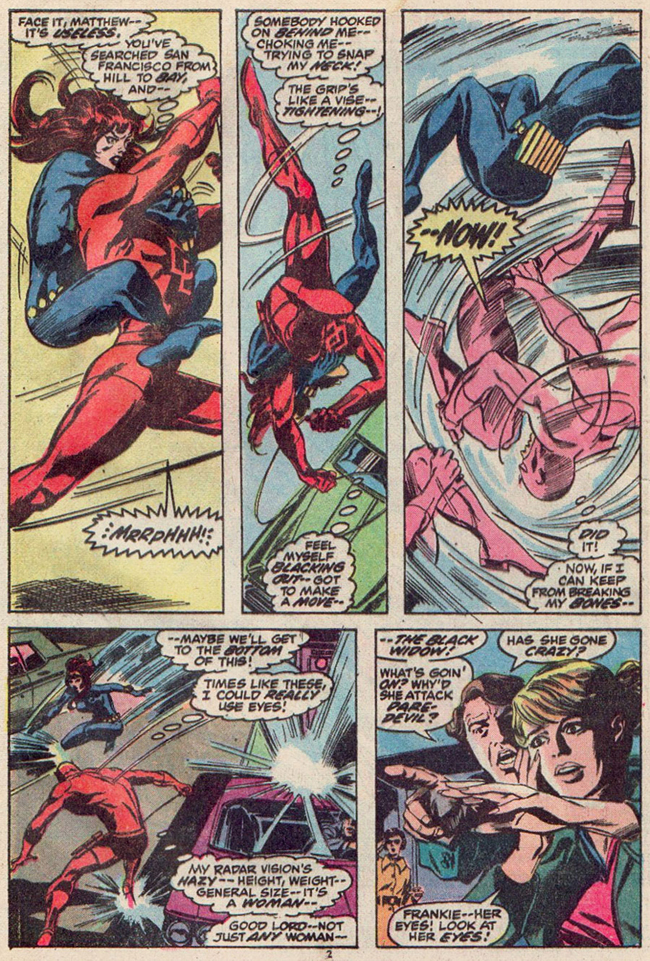 The earliest stuff was by the late great and legendary Wally Wood... 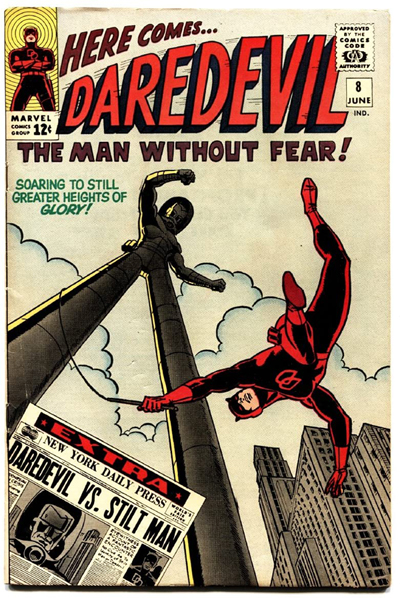 Frank Miller ( creator of Sin City ) did some time on the book... 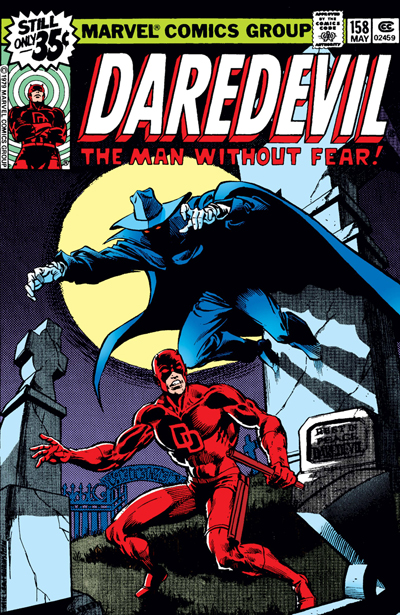 the also legendary John Romita Jr. was on it for a little while... 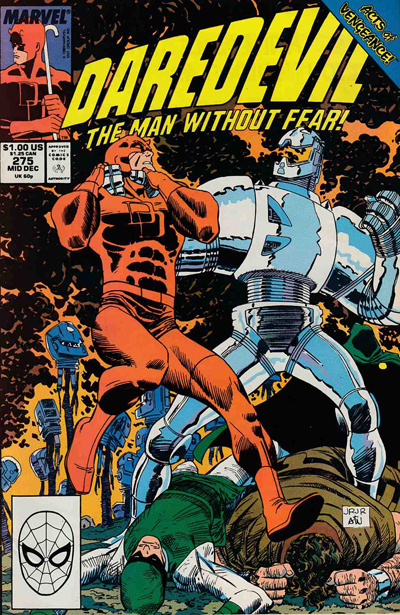 That is a murders row of legendary talent that all at some point, for some reason, ended up working on a second string character's book. It's a bit obscene in a way...like...was there NO other better selling book they could have been put on at the time?? Did they lose a bet? was it a running gag? and let me point out here, how wildly different most of these illustrators styles are, and yet each one of them drew DD as if they were born to. Bizarre.

I think if you put a gun to my head and forced me to name one thing that is consistent through the whole span of the character, it would be that it's not written for a kid. I don't mean that it's rated R, I mean that the writing is never dumbed down. Daredevil is not a goofball of glib like Spider-man, he's a fairly serious guy and smart, thoughtful and the writing always shows that off. The internal dialogue of Daredevil is insightful, morose sometimes. 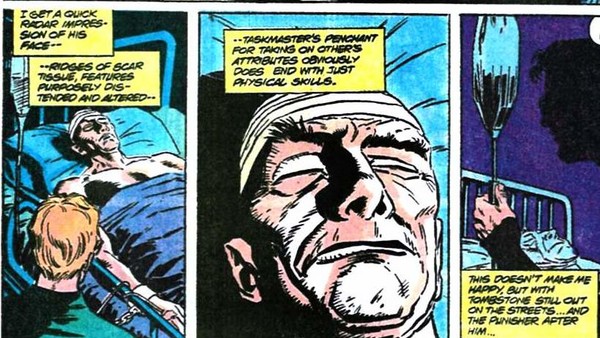 Anytime you're at your local comic book shop...when in doubt, pick up Daredevil.

There's collections of issue up the whahoo. And your comic shop would probably be happy to help you figure out an era that'd peak your interest. I'd say the run up to no.300 (1991 or so) is a good one to track down. Also "LadyBullseye" or "return of the king" collections. Or just do what I do...grab and issue of DD at random, read it and spend a bunch of time tracking down the rest of the story.

It's amazing how long some of these characters have stuck around. I saw some of the TV series when my son was watching it. Like several of the similar shows it came down to a lot of fist fighting. One of these days I'll track down some comics.