On a normal Wens. this would be new comic book day at your local store #NCBD Most are still closed and the distributor is still shut down...SO...let's look back at on of the first major cross over events, and a well done fun series SECRET WARS.

There's bunch of interesting facets to this I'm gonna cover...so...read til you get bored I guess.

First thing you have to understand is that this was an era of Marvel where even so much as a cameo appearance of one character in another's comic was rare. So a series with nigh every major character and villain was not only a monumental undertaking...it blew my childhood mind just seeing the cover.

But let's talk about that cover. Iconic, fantastic and skillfully crafted by Michael J Zeck and...it is perhaps responsible for ruining the concept, integrity, and value of covers for all time. Unintended consequences of genius. How was he to know that from that point forward lazy minded or time pressed illustrators across the industry would jettison the notion of the cover needing to tell a story and just opt for an image of a bunch of characters running forward in some sort of formation, looking cool.

But let's not dwell on that...

The base of the story is an incalculable powerful entity "the beyonder" abducting a score of heroes and villains, dropping them off on an alien world to cobble whatever resources they could find and fight it out...winner having thier wildest wishes granted.

This COULD have been a ho-hum formulaic MESS, but it wasn't. It was good...and that is because, inadvertently or by design, the star was Doctor Doom.

Doom...who by nature is not one to fight over scraps or be a pawn, quickly determined that the true enemy and true opportunity was the power that the Beyonder possessed. 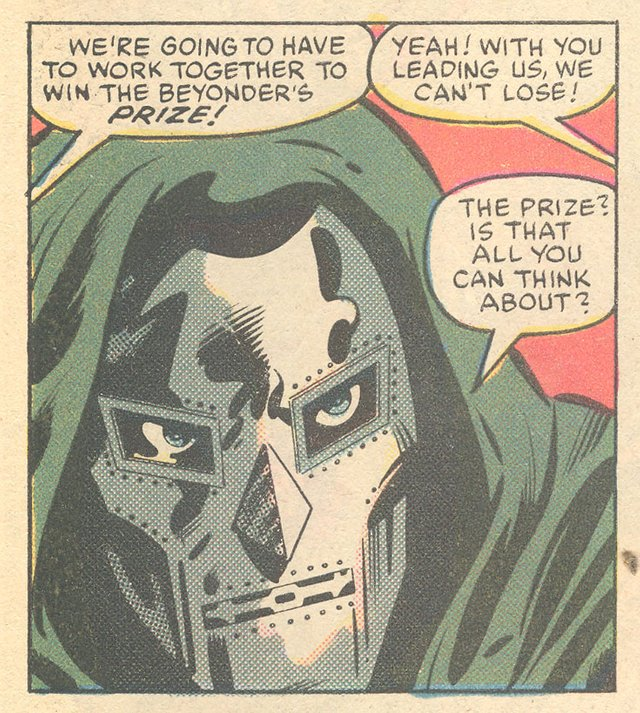 Power that needed to be taken from him...and if no one else was able to see that, well...then Doom would take care of it himself.

This page here seemed simple enough, but it was the seed of a surprising level of depth the series would have... 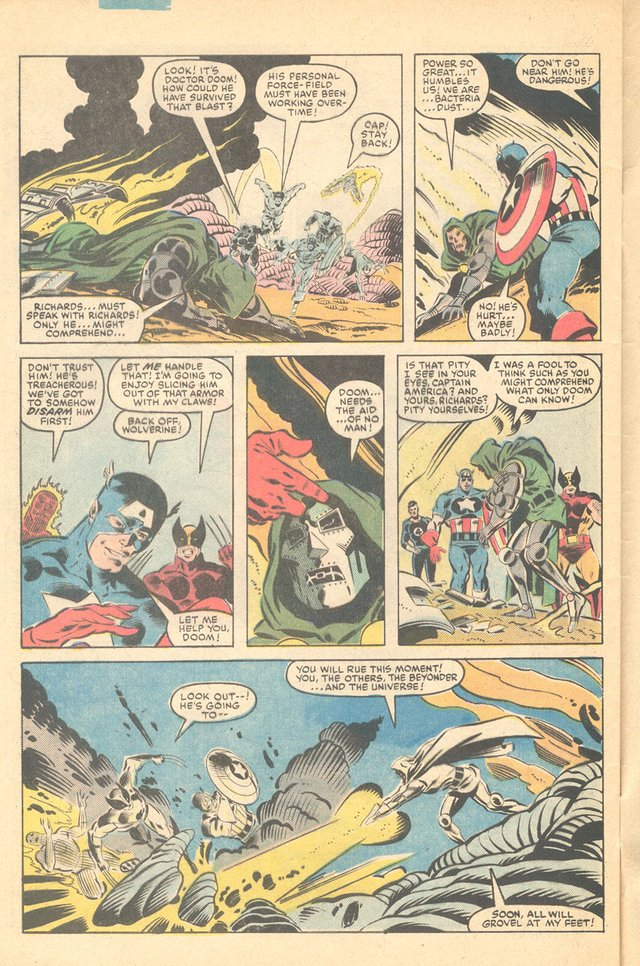 "must speak with Richards...only he might comprehend. Power so great...it humbles us. We are bacteria...dust..." A standard villain would just jump to some evil plan, or fight it out with the heroes, but Doom needed to get his head around things first...try to compare notes with someone. No such luck though.

He was the villain, but also in a way a lonely tragic figure. And proved to be a brave and as willing to sacrifice as any of the "so called heroes", maybe more so. No matter who your favorite Marvel Super hero was...part of you, in some dark corner of your mind, started rooting for Doctor Doom along the way.

Say what you will about Jim Shooter the man pulled off some great storytelling here. Every character was consistent and true to their nature, there was a lot of interesting and fun dialogue as some of these heroes knew how to work with each other already and some didn't. Some where in over their heads and for others it was just another bullsh*t week of having to save the universe. 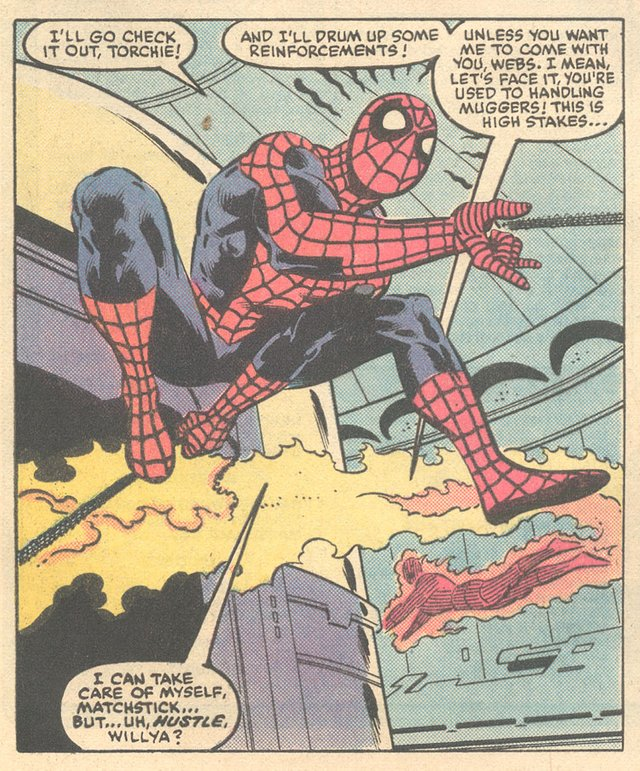 The individual issues are easy enough to find and mostly inexpensive, and it's been collected into tradepaperback. Maybe call your local comic book store and see if they can hook you up. It's one of those stories you'll end up going back to and rereading from time to time as there's a lot of ins and outs and different perspectives at play...and it's really entertaining and beautifully illustrated, mostly by Zeck with a few issues by Bob Layton who plays second fiddle to no one when it comes to visual storytelling.

When you get to issue 10, you'll understand that Doctor Doom is an absolute, mentally unbreakable...badass. 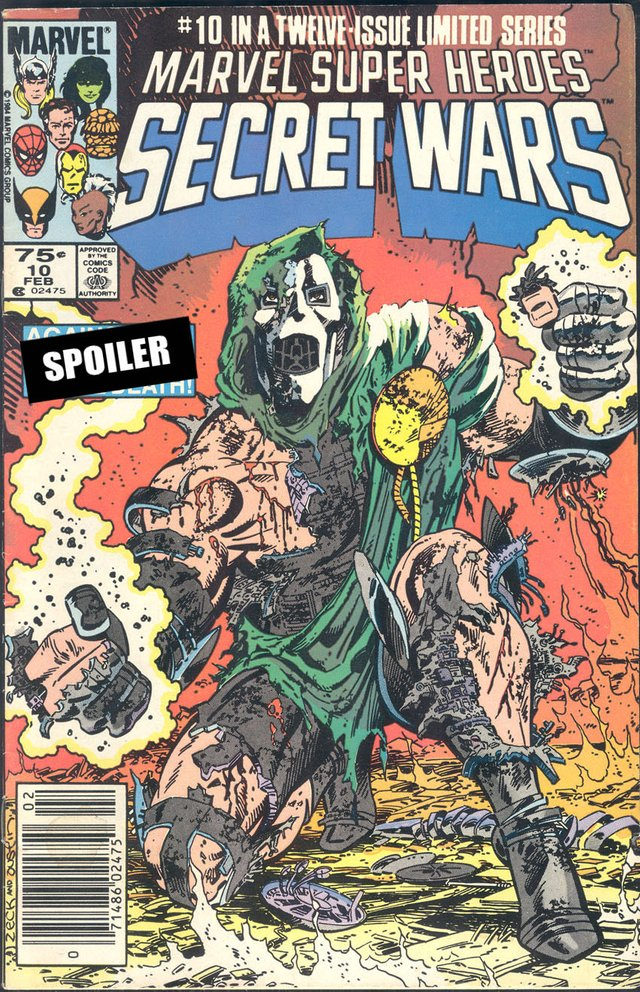 The heroes are all on the cover up there, but the list of Marvel bad guys is worth the cover price by themselves- Ultron, Galactus, Absorbing Man, Magneto, Doc Oct, the Wrecking Crew, Molecule Man, Kang, the Enchantress, the Lizard and technically speaking in the story telling timeline, the first appearance of the symbiot that is Venom first appears in issue 8.

I remember that series. It came out at the tail end of my comic buying days. Yeah, the cameos were rarer, outside of great series such as Marvel Two in One, Marvel Team up and Brave and Bold.

When you get to issue 10, you'll understand that Doctor Doom is an absolute, mentally unbreakable...badass.

I hated back in the 70's when the FF would be fighting him and turned out at the end to be one of his robots. Was complicated as the robots all believed they actually were him as well. He was one of the mor eintriguing bad guys as well, using a mix of technology and sorcery.

Thanks for the blast from the past. If i had all the comics from when I was a kid now (my mom through them out) I would be wealthy). Feel bad for kids today that have to shell out 5-10 bucks for a comic. I remember back when they went up to a quarter, the shock of it jumping up so high.

ah yes, the ole Marvel Team-up and Two in one. There was some solace in those, but they always felt...vapid in a way. They had no real effect on the continuity of either character of the Marvel Universe as a whole, but we took what we could get then, huh? haha
worse than these kids having to pay 5-10 a comic is the lack of value in most of them as far as story, creativity, and even illustration. Ah well, all I can do is make sure mine are worth the cover price.