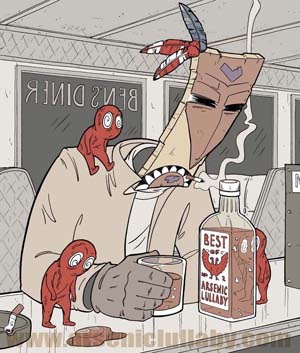 Comic-Con International 2020 or [email protected] has come and gone. In years past, after the chaotic 5 day marathon of being an exhibitor at the largest comic book convention in the U.S. and all the trials, tribulations, stress and joy that goes with it...I say "til we meet again" to the low budget hotel, in a low income neighborhood, just on the outskirts of Mexico, and take the trolley in the direction of the airport with 80 pounds of luggage...with one stop along the way that's my own personal tradition. That's having breakfast at a specific little diner on the edge of San Diego. Just one of the many little things I've missed. Of course the pancakes are a small loss in the great scheme of things

A somewhat smaller percentage of that loss in revenue is had by ME, and of course the rest of the comic book industry....but also ME. And the hits keep on coming, as Cincinnati Comic Expo cancelled this week...and I'm going to take a wild guess that all the rest of the shows I had lined up for are going to plug their plug.

CCI at home wasn't a total waste of time for me though, sold some stuff at the online store...

got some commissions, I'll show you one now!

...Actually give me a minute...wow this blows. This BLOooooooowwWWs. This sucks the biggest suck that ever sucked a suck. To quote Homer Simpson.

NOW...I feel as though, to protect whatever opinion you have of my sense of perspective, I should point out that what I do is in fact a job, a business that I built from scratch. If I was a house painter, or a plumber and lamenting the effect Covid is having on my business, most people would sympathize right away and understand it's a problem. A grown up problem. But me and any other creative types, I don't feel, get the same regard.

I have invested many years of hard work and risk and stress and hard work and energy and hard work...in growing my business, in honing my skills, in providing a product that people enjoy. AND creating a business strategy based on the world in which I live (lived). Comic-Cons nicely handled many things things at one. Sales, advertising (even if they don't get a copy at the show...they've been able to see all that is great about it), branding ( people see that I am a lowlife and that adds to the credibility of a series that is edgy). They are an excellent outlet for what I do, and it was my assessment that they had a good chance of growing even larger, based on human nature and tribalism in the internet age ( it's a complicated theory...I'll explain it some other time)

Them ALL shutting down with no warning is a huge hit, with no respite on the horizon.

That story about the impact the loss of this show has on the city, imagine the impact that is having on other creative types who earn a living with the skills they honed. The impact on the other publishers, on the comic book stores and industry as a whole. This is not good.

The more clever among us will find a way to come out ahead...but we may have to do that absent much of what was the rest of the industry. and how many publishers can go under before the printers that specialize in comic books also go under...probably not many. Printing is an industry with slim margins.

This is a mess. Sometimes all you can do is save yourself...and in this case, if enough of us save ourselves it might save the whole thing. To some degree.

Now, all those people who would have gone to these shows are still out there...it's a matter if finding them and getting your work into their hands. This is going to require some recalculating.

...alright, as I was about to say, I got some commission requests. Gonna show you one now! I neglected to take as many pictures of the progress from start to finish as usual, but still worth a look. I don't know a hell of a lot about Brother Voodoo. He was a 4th string character when I was reading Marvel, and he'd show up here or there when a story-line involved magic. Y'know a guest appearance in Spider-Man once in awhile, or he'd be a filler story somewhere, he was in a few issues of Moon Knight. I think he's a more prevalent character now.

Basically he's a witch doctor and he communicates with his dead brother...or something like that. At the time I was reading he was a witch doctor character, shoe horned into being a super hero character, either as an experiment or as a tool the writers could use when they wanted to do some mystical story. Marvel had a lot of those type characters...as if someone wanted to do a different kind of comic book but they were stuck at Marvel so they just took that character and threw tights and a cape on him.

The late 70s early 80s era of Marvel had a lot of that crap...they had a handful of titles that where just basically...dumb idea of the month. Marvel Spotlight, Marvel Premiere, Marvel Chillers....I forget all the names. There where giant stacks of them at the used book store for .25 each, so if you couldn't find anything good...you'd get a couple of ten year old books highlighting bad ideas. It's where they'd stick stuff like this... 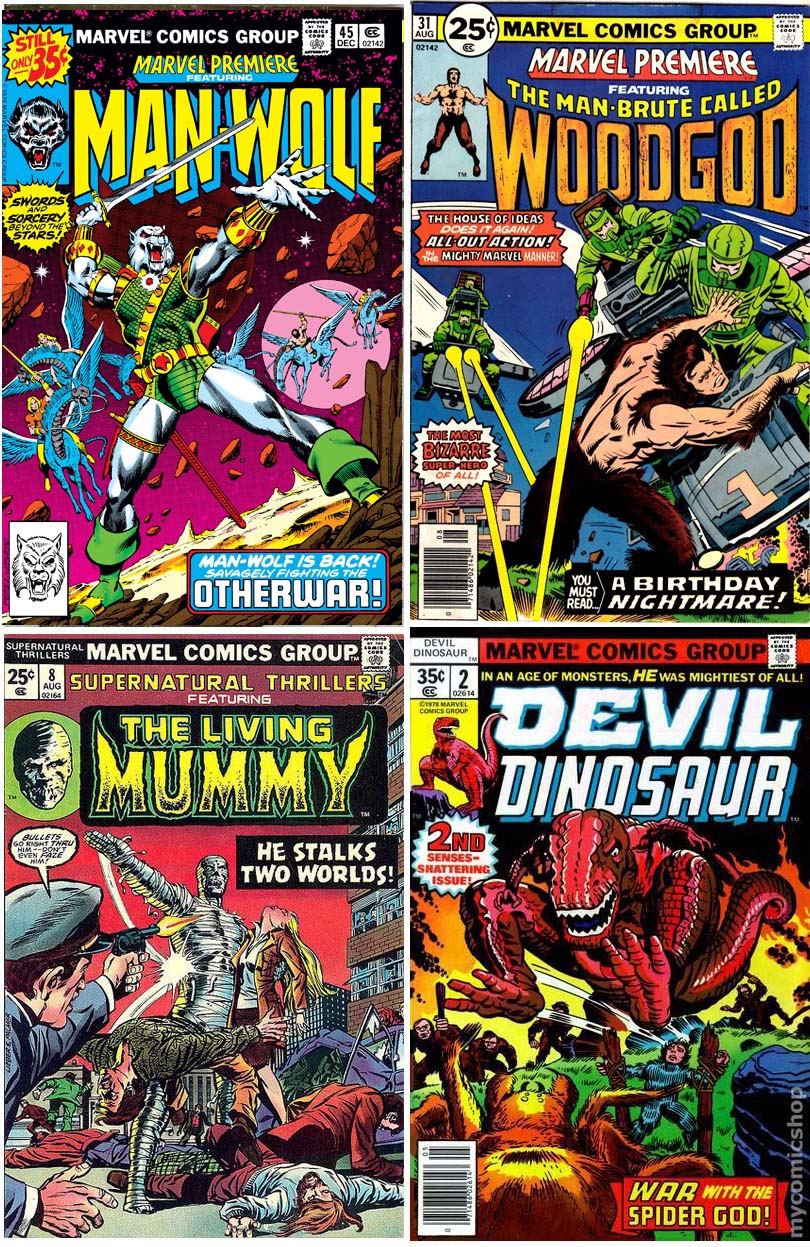 concepts that no one in their right mind would attempt to have exist in the same world as Spider-Man and Fantastic Four. They print them in an issue or two as a test and if people didn't complain too much, the next thing you knew they were fighting Captain America in his book for some half ass-ed reason. Morbius The Living Vampire...is actually getting a major motion picture. You know how many times I could have bought Morbius issue no.1 for .25?! If I could go back in time...I still wouldn't buy. It looks even dumber now than it did then. If you had told me when I was 10 that was going to get it's own movie I would have said you must be on crack. The origin is him trying to cure himself of something, through science, and accidentally giving himself all the attributes, good and bad, of a Vampire. Which was probably a really interesting story that someone pitched...and Marvel said "yeah great...put him in a Cape and tights, he's gotta be in an issue of Spider-Man to get any traction."

Same goes for Red Wolf, a Indian Vigilante ( what? "Indian"...that's what they called him, go get a time machine and bitch at them about it) usually fighting industrialists and mafia types who were trying to muscle/blackmail/threaten their way into owning the reservation to get oil burred there or diamonds or whatever the f*ck the story was that month. Actually a interesting idea...until they super hero-ed him up.

Marvel- "If he doesn't have a cape...they you at least gotta put animal head on him or something. Oh! and he'll fight crime with a tomahawk!"

Marvel- "Shut the f*ck up and give him an animal head...OH and a wolf as a sidekick!"

I honestly don't know WTF was going on with all the D list titles they were putting out. It was the disco era, maybe they were all on cocaine, for all I know. Marvel - "She's a Sucuboulus? Sucumabus? sucu...fine...look whatever...we need more female readers and a girl character'll get that done. Just figure out a story with her an Spider-Man and try not to show here facing front on the cover". 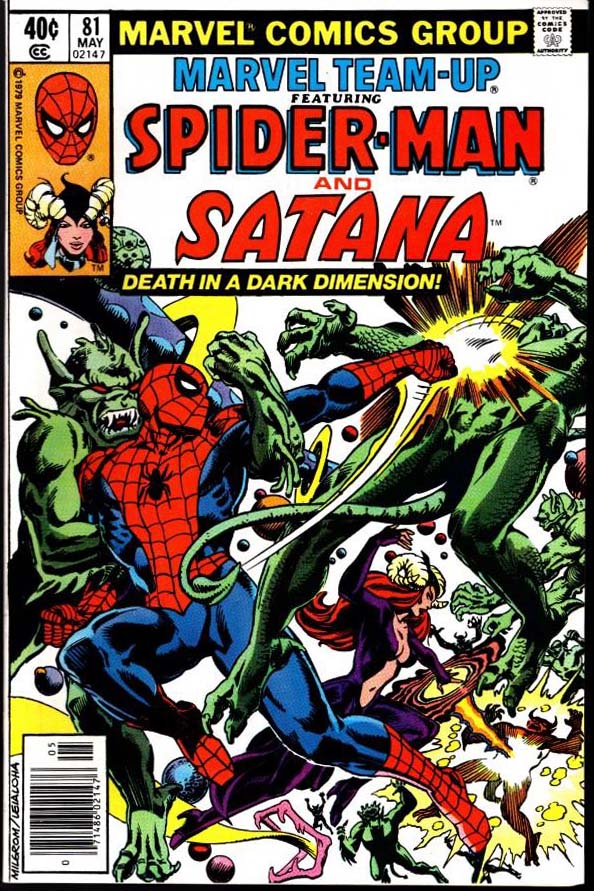 That character in a comic book world? Written for 10yr olds?....Completely fucked up and made zero sense, and had nothing to do, conceptually, with the rest of the MCU...but...you think any of us gave a fuck when we saw her costume? We did not. I think at that moment part of me stopped giving a f*ck about comic books at all, and video games, which chewing gum is best...and anything else that brought me joy from birth until then. My interest in things that did not have to potential to become a series of bad decisions was gone forever.

What the hell was I talking about?

Here was the rough ideas... He picked the second one, which was a good choice, and off I went. First the final pencils... And eventually, all done! Turned out well, I'd say. Got more of them to do, I'll show em off as I get them done.

That's all for now, except for the shameless plugs!

If you'd like a commission of your very own, message me at douglaspasz--at gmail.com

If you wanna use crypto, just lemme know and we can work it out.

Digital limited editions of some of my work ( or NFTs as I've just learned that they are called) can be found on Makersplace, an online art gallery of sorts where you can get blockchain verified limited edition digital art.
https://makersplace.com/arseniclullaby/

Swing over there and check them out and check out the site. It's an interesting place. Tell them I sent you!

AND don't forget I've got t-shirts available through WORLD OF STRANGE! https://www.worldofstrange.com/collections/all/arsenic-lullaby Thanks for letting them know!

Full upvote for what it is worth.

Yes, this whole thing is an absolute disaster. The majority of people go along with it because they (for now) have a job and don't have to worry about keeping the doors of a business open. They scream at people for putting the world in danger for wanting a loosening of restrictions, yet forget, that somehow the products they consume, have to be made. Having been self-employed for over 20 years, I know all too well the chain reaction of people / businesses not being able to pay their bills. It affects others upstream. On such a large scale as this, it is a slow blood poisoning for the economy.

Well, tell me, where is the food going to come from, and all of the other things people buy?

In Austria and Germany at the start of the lockdown, they had to put out an emergency call for workers to work on the farms, because the two countries are heavily reliant up on foreign workers... who could no longer enter the country due to border closures.

There's a point where life has to go on regardless of what the "emergency" is, or it ceases to go on.

and yes, I'm on board with everything you said, and how you said it. I think people say "How can you put money over lives?!!!" neglect to realize that "money" is an abstract concept and what we are talking about IS "lives" as is "life" as in living it as best and safely as possible within reason. Mother nature is not going to stop trying to kill us...until it inevitably wins. So, as you point out, there comes a point at which we've eliminated as much risk as we reasonably can and life has to go on.
For me that point was several months ago, but I am less cautious than some...and have a keen awareness that every day that peals off the calendar is a day that you NEVER get back, it is just gone...forever.

You might appreciate the humour in this then. He even drops the name COVID.

Living in the coffin of our comfort zone.

Thanks for the shout out!

This post was shared and voted inside the discord by the curators team of discovery-it
Join our community! hive-193212
Discovery-it is also a Witness, vote for us here
Delegate to us for passive income. Check our 80% fee-back Program
$0.00
Reply
[-]
arseniclullaby (66) 9 months ago