clayboyn (72)in LeoFinance • 2 months ago

Ok guys, so I just lost my first position in a prediction market, but I'm actually quite happy to do so! Let me explain. Over the last month I set up 2 contrarian prediction markets and bet against my investments for that month. I made markets to bet against WLEO and against RUNE so that if I made a bad trade, at least it would offset my losses slightly. Someone just won pretty big on my WLEO market as the odds were at least 10:1, but on the other hand I won pretty big buying WLEO at $0.57 cents.

The RUNE market is still up in the air and it's possible it will end up being a double win, but I'm enjoying the idea of using prediction markets to speculate on futures without having to put leverage on centralized exchanges. Long term I think we need more decentralized leverage trading options to encourage liquidity to exit centralized exchanges and enter the defi space and dex space. Currently I only know of Unimex and it seemed pretty sketchy so I haven't tried using it.

So yea, my long win streak on predictions has finally come to an end, but I might keep trying this double exposure thing for a while. Today I saw a tweet that got me thinking about a new prediction market idea from @kenny-crane. Why don't we speculate on whether HIVE will flip STEEM by May 1st? I'll leave the market open till the end of the month for anyone that wants to buy in and to sweeten the pot I'll throw a big bet on HIVE. Feeling bearish? Come try to take my moneys, but be warned this isn't another contrarian bet where I secretly hope to lose. 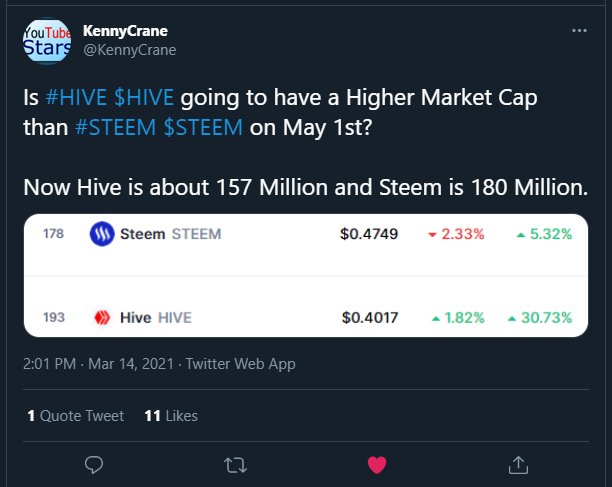 I plan to make more LEO markets and maybe a CUB market once a little of the new car smell wears off. The price is so volatile right now I feel like making a market to speculate on CUB would just be completely degen, but hell I already aped in so who knows maybe in a few days my resolve will wane. Good luck, may the force be with you, may the odds be ever in your favor, some other stereotypical pop-culture bullshit sayings. Much love. 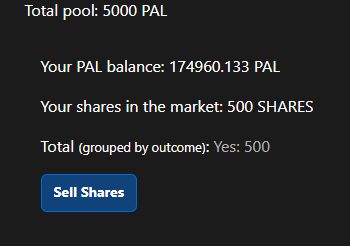 Glad to hear I inspired you! 🙂

I'll consider putting money behind my bet, at https://dublup.io/market/01F0T7QG561YXS1148QWM86KVE

So far, #HIVE is winning on my Twitter Poll. Please consider voting there, any Tweeter who reads this!

This is one I'm definitely hoping plays out well. I'm just wondering who's going to take the steem odds lol.

Interesting bet. In this interesting times it might have a chance. There are less Steem than Hive in circulation. If we start burning Hive to increase the price the market cap will probably not go higher. If there is more awareness and push, it might overtake it.

Yea burning can hurt market cap, but usually the increased demand or decreased selling pressure from burning should offset it. We had more trade volume than steem today.

I had five of those ten winning shares. *happy dance.

Congratulations @clayboyn! You have completed the following achievement on the Hive blockchain and have been rewarded with new badge(s) :