Hard time for CTP because of... Splinterlands? 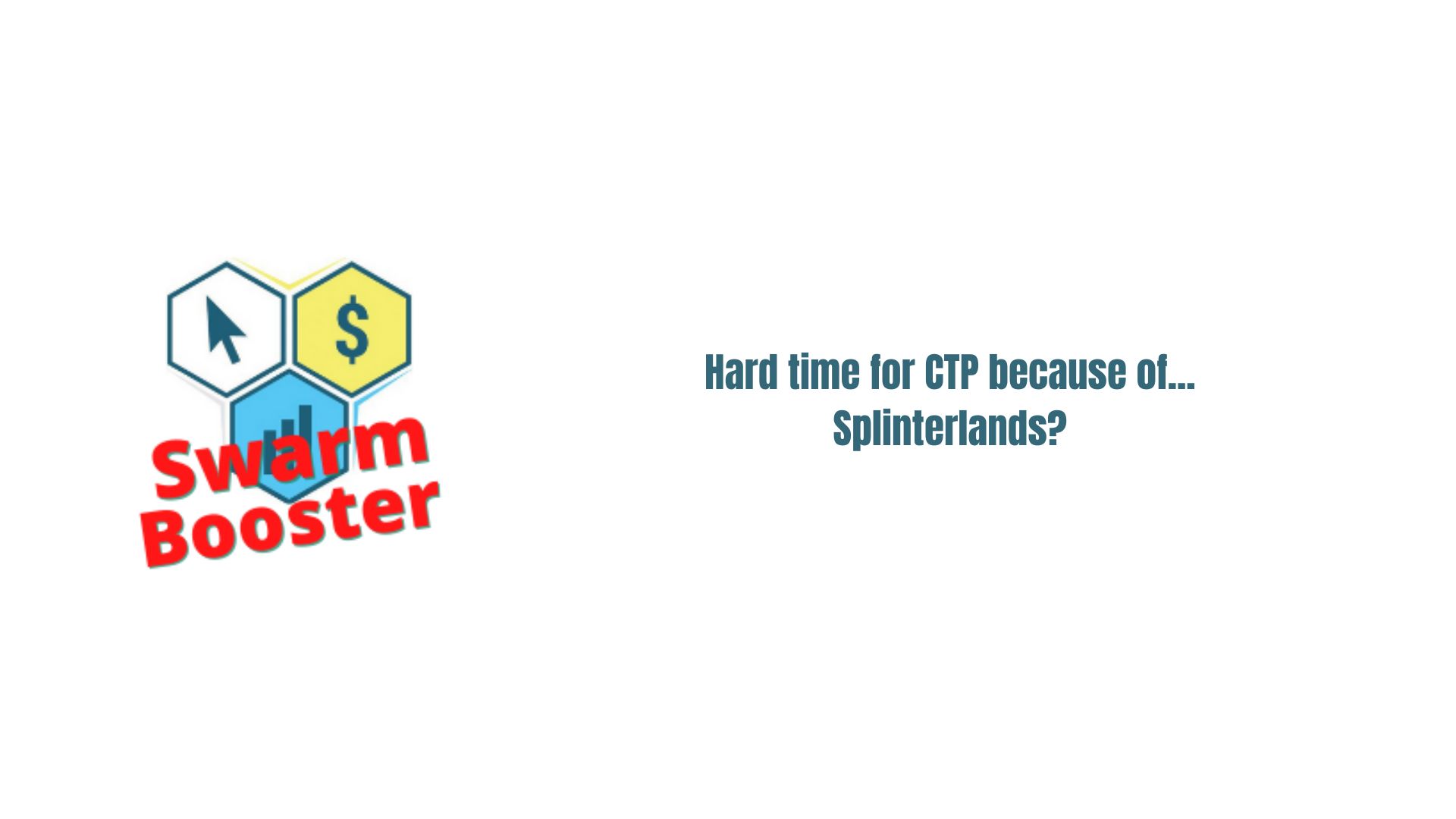 Thanks to the CTPSB project, I always have a close look on the CTP market. The last week was pretty special. It started around the 10th of September and went on until now. People were selling CTP tokens at a rather high volume. I suspect that Splinterlands is responsible for that...

With the Riftwatchers pre-sale on 15th of September, people were collecting tokens from everywhere to be ready for when the sale would start. They sold the Hive-engine tokens they had around and CTP was among them. For a long time, CTP managed to keep the value rather stable compared to most other coins on Hive-Engine. That's probably why, people used them for Riftwatchers. You tend to sell things that have value...

The result of this is that the price of CTP has gone down quite a lot. From around 0.016 Hive, it is now around 0.008 Hive. Which is about 50% price decrease. The positive thing is that it seems the downward pressure is lower and also there are some solid buy orders in the order book to support the actual price.

For the CTPSB project, that pays the dividends to the delegators in CTP tokens, this is a major influence. Unfortunately, the APR for delegators this week is a bit lower than what we would like to be able to pay. We will work to increase it again in the future. 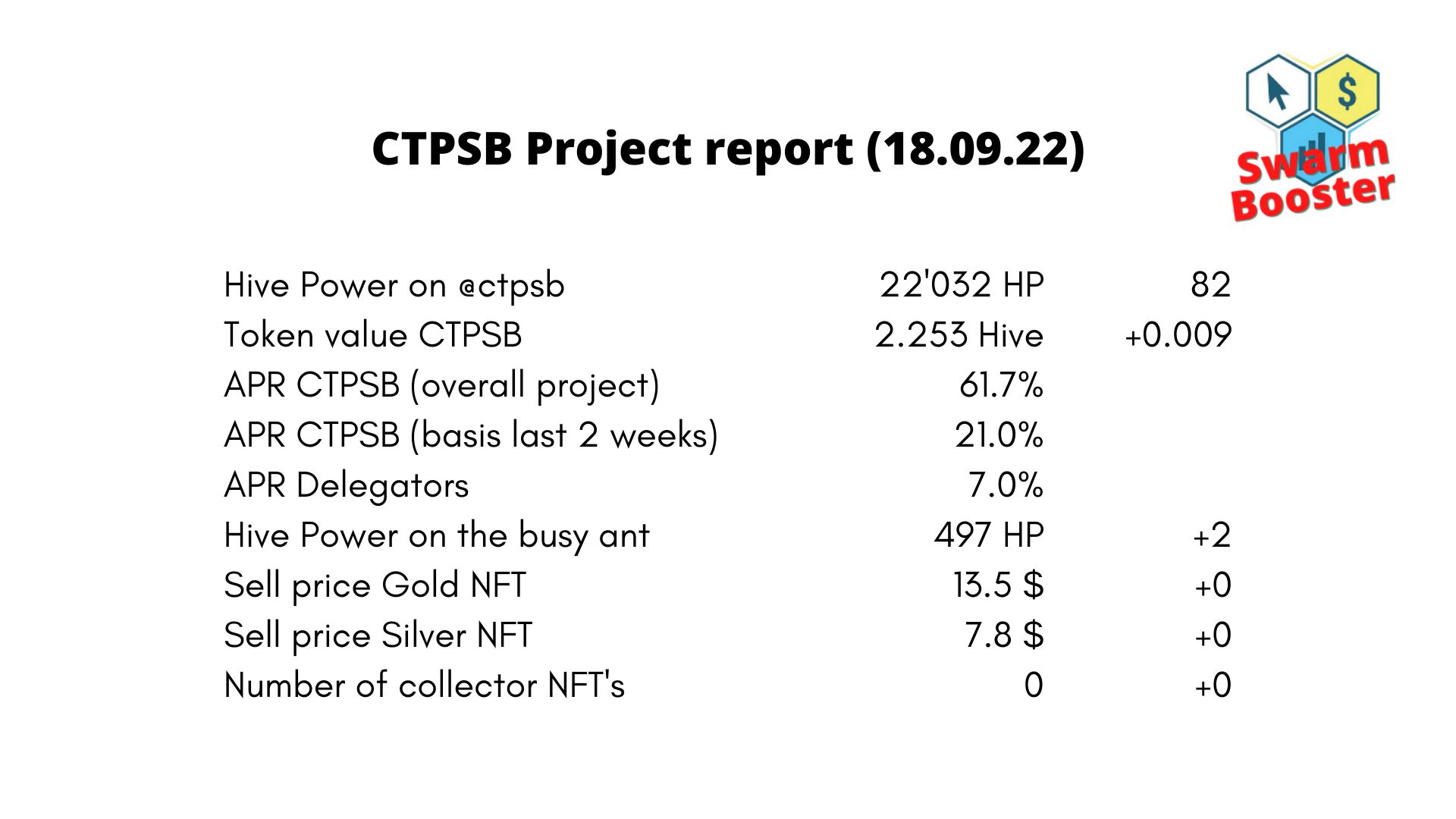 Yes, I saw that too, but it seems to be happening to a number of other projects as well. Good to hear that things may be turning the corner as I've been staking any CTP tokens I get. The blockchain rewards those with strong hands and a long-term mindset. The future is so bright, that I can see it from here! :)

I like your positive outlook :-). Let's hope you are right !

I didn't even realize the price so I will place a buy order for some CTP tokens. I'll be saving these tokens for the next CTPSB challenge.

This is an opportunity for me. CTP is a strong community and being among the top holders has many advantages so now is the time.
!CTP

CTP is definitely very cheap now. The reason is that some big players sold their whole stake in one go.

At these prices I just stake them. I have some sell orders at much higher prices. If they hit, they hit, if not, I'm not in a hurry.

Thats quite interesting - and makes CTP a good purchase prospect, I'll be checking it out !

I have some buy orders in, looks like CTP is on sale!!

A rather big user just sold all his tokens in one go. Very cheap CTP on the market now :-)

Thanks for the heads up. I saw my buy order got triggered. Damn that i removed the other big one!!! I agree. There were a lot of people that were selling anything to get in on that presale which was over in no time flat. I doubt the ones that missed it will buy back into the ones they sold. I do not think the Tower Defense presale this week will have that much of an impact on the markets. Take care.

That is the truth. I would love it to sale out quickly since that would mean there is a lot of interest from the community and would keep the prices supported. but I do not see the urgency since there is currently no game to play until the end of the year at the earliest if I was reading it correctly.

I admit that I was too rash to sell and I put my wallet first I didn't think far for the future, I promise from now on I will risk all my CTP until I meet the target I want.💪

It's a long time game and CTP can be a very interesting token in the future.

Dear @ctpsb,
May I ask you to review and support the Dev Marketing Proposal (https://peakd.com/me/proposals/232) we presented on Conference Day 1 at HiveFest?
The campaign aims to onboard new application developers to grow our ecosystem. If you missed the presentation, you can watch it on YouTube.
You cast your vote for the proposal on Peakd, Ecency,