Let’s take a look at the 3Speak stats. 3Speaks has some interesting roadmap ahead with a new infrastructure for videos, a token airdrop and a whole new tokenomics.

3Speak promotes free speech and censorship free values. A platform where you can speak your truth, without the fear of being banned. 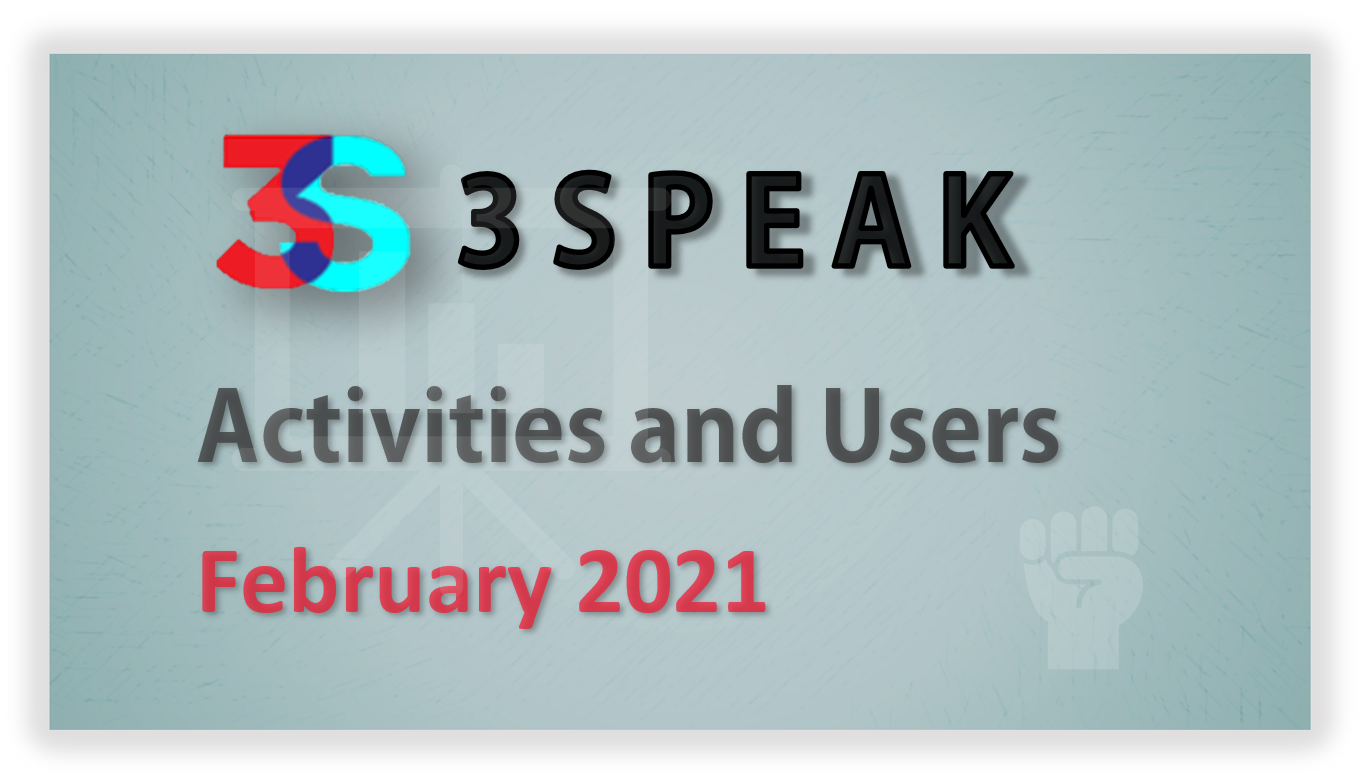 Here we will take a look at the activity on the platform, the overall number of posts and comments, and the number of users. The top content creators for February 2021 will be presented as well.

3Speak started its journey somewhere around May 2019. Almost two years in operation!

First let us see the number of posts, or to be more exact videos coming from the platform. 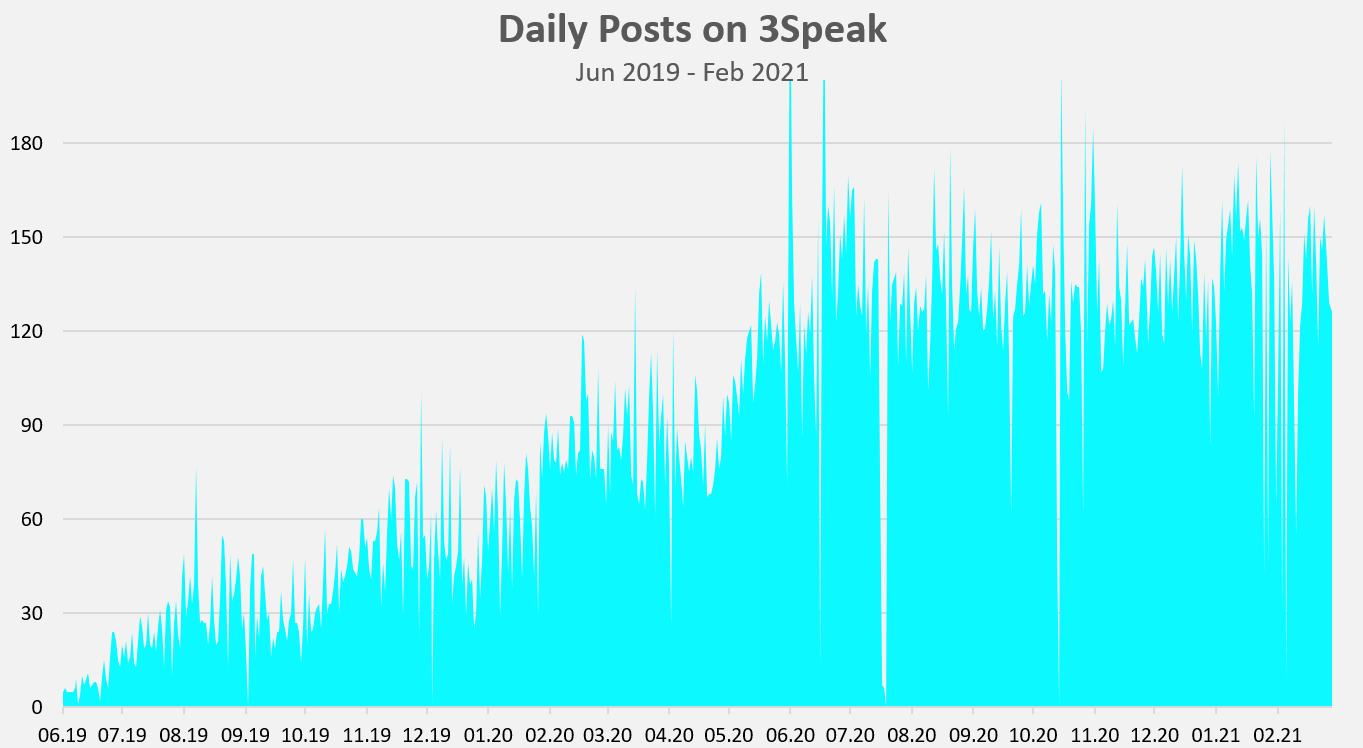 A clear up trend that here in the begging with some flattening in the last months. The platform is still new and there is a volatility in the number of posts.

On average there is around 130 video uploads per day in February 2021, with occasional drops due some technical issues.

Here is the number of posts summarized by month. 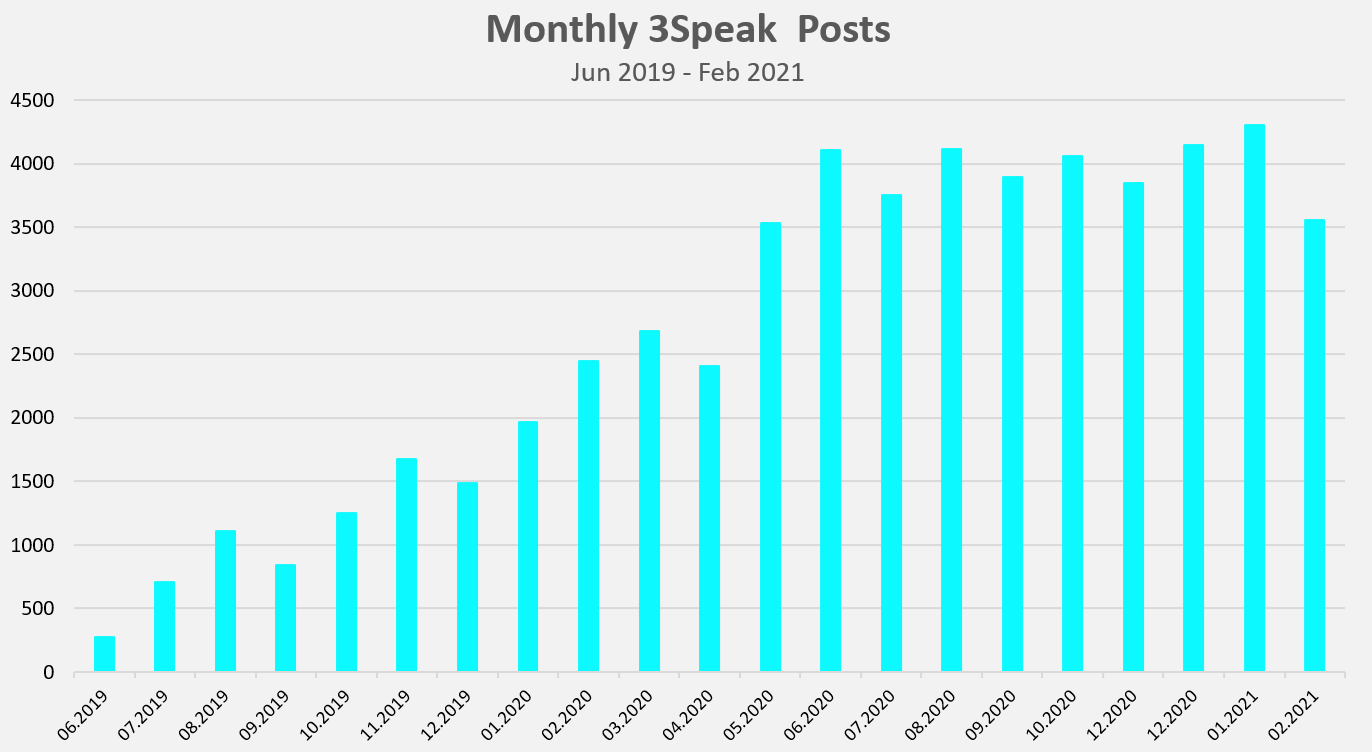 Similar trend here as the daily posts. An uptrend and a flatening in the last months.

How is 3Speak doing with the number of authors on the platform?

Here is a chart on the number of monthly authors that posted on the 3Speak platform. 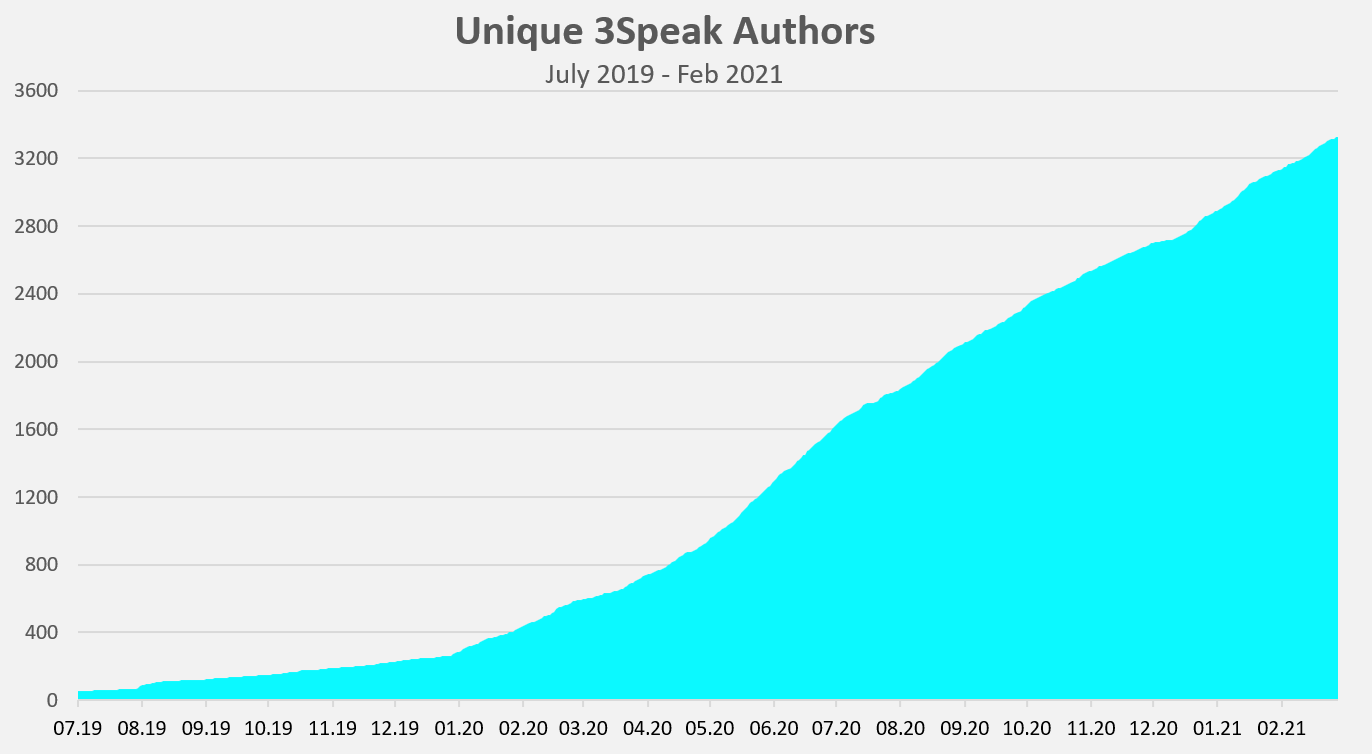 The overall number of authors that uploaded a video in February is 626. February is a bit shorter month, but more or less it has a similar number of MAUs as the previous months, between 600 and 700 authors. 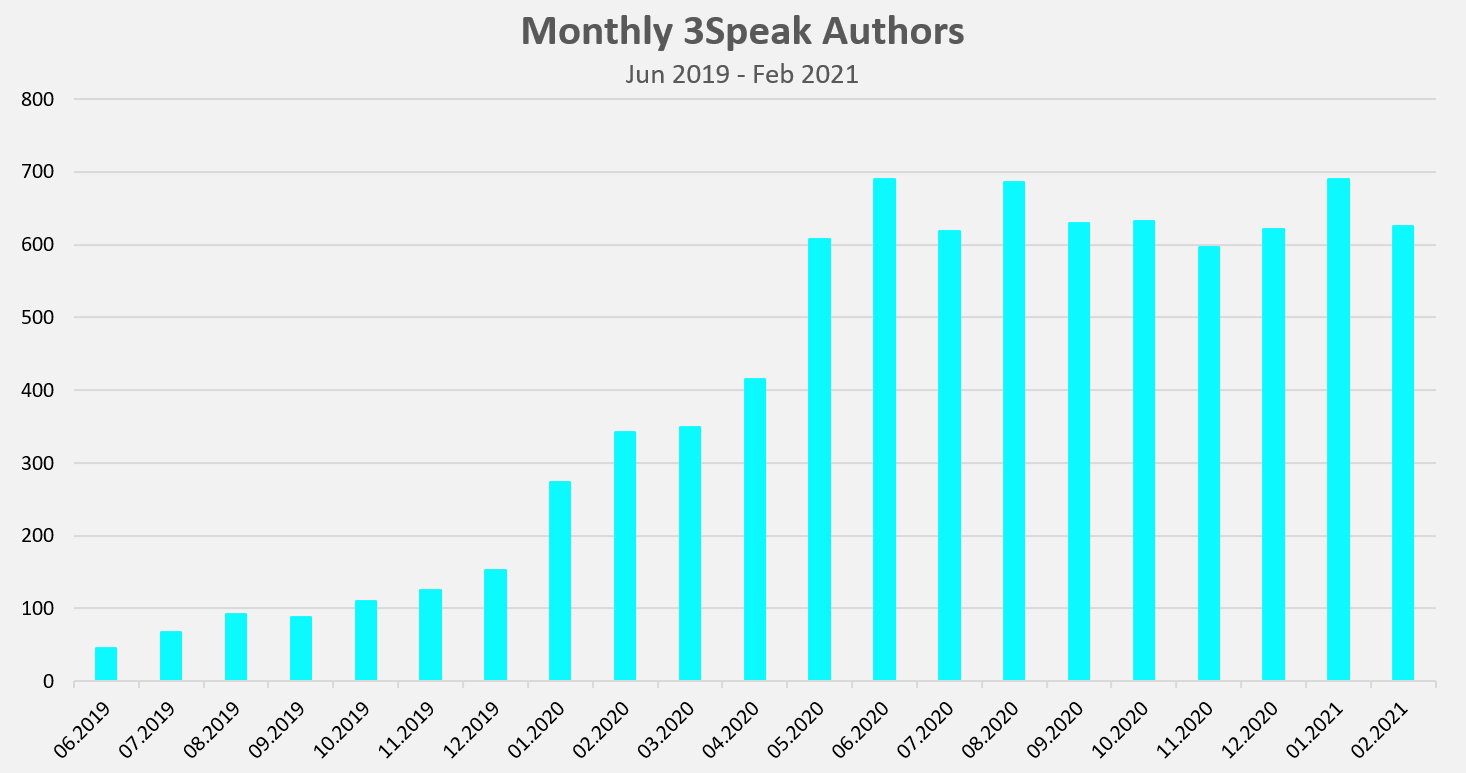 The number of unique 3Speak authors is showing continuous growth. Even in the last months, when the activity is constant, the numbers of new authors trying out the platform is growing.

Authors that posted the most

Here is the rank of the authors that posted/uploaded the most in October 2020 on 3Speak.

Looks like the authors on the top are eighter plagiarist or similar. More legit authors down the ranks.

3Speak supports its content creators with votes from their official @threespeak account. It has around 1.5 million HP. A lot of the times @theycallmedan also joins the party and vote on 3Speak content.

Here we will be looking into the number of votes from the official @threespeak account. 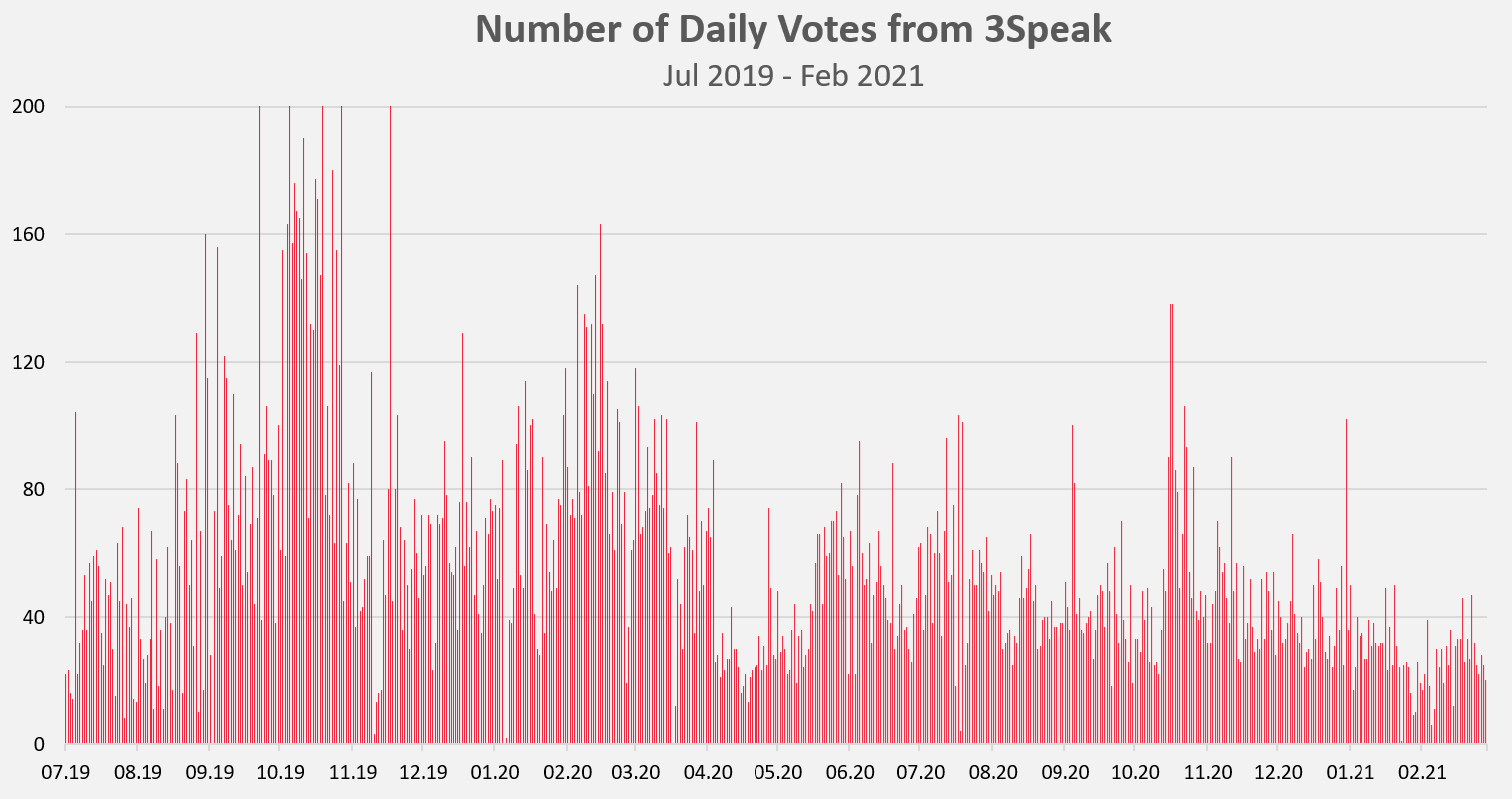 The Most Supported 3Speak Authors in October 2020

Below is a table for top authors who have received support from 3Speak in form of votes in October 2020.

The ranking is made by the cumulative vote weight that authors received from @threespeak, meaning one vote at 100% is better than 3 votes at 20%.

Congrats to the users above.

It will be interesting to follow how things will evolve for 3Speak this year with the whole new infrastructure and tokenomics.

I want to power up maybe more hive for it, but I need information. You have some? :D

Soon:)
Dont have more than that

A very strong uptrend in unique monthly authors. Hasn't gone parabolic yet, then it should be fun!

My favourite HIVE video platform! Interesting to see it took nearly 11 month to acquire it's share of HIVE userbase. Looks like they've reached the limits of the HIVE ecosystem and will now need to look elsewhere for growth.