Let’s take a look how is the @hbdstabilizer doing!
For those who don’t know the @hbdstabilizer account is trying to maintain the peg of the HBD to the dollar. It receives HBD from the DAO/DHF and sells it on the internal market for HIVE and then sent that HIVE back to the @hive.fund, where the HIVE is being converted to HBD.

Since the last Hardfork and the ability to convert HBD to HIVE, the @hbdstabilizer works in the opposite direction as well and it is buying HBD with HIVE when needed to maintain the peg. The bot is runed and operated by @smooth. 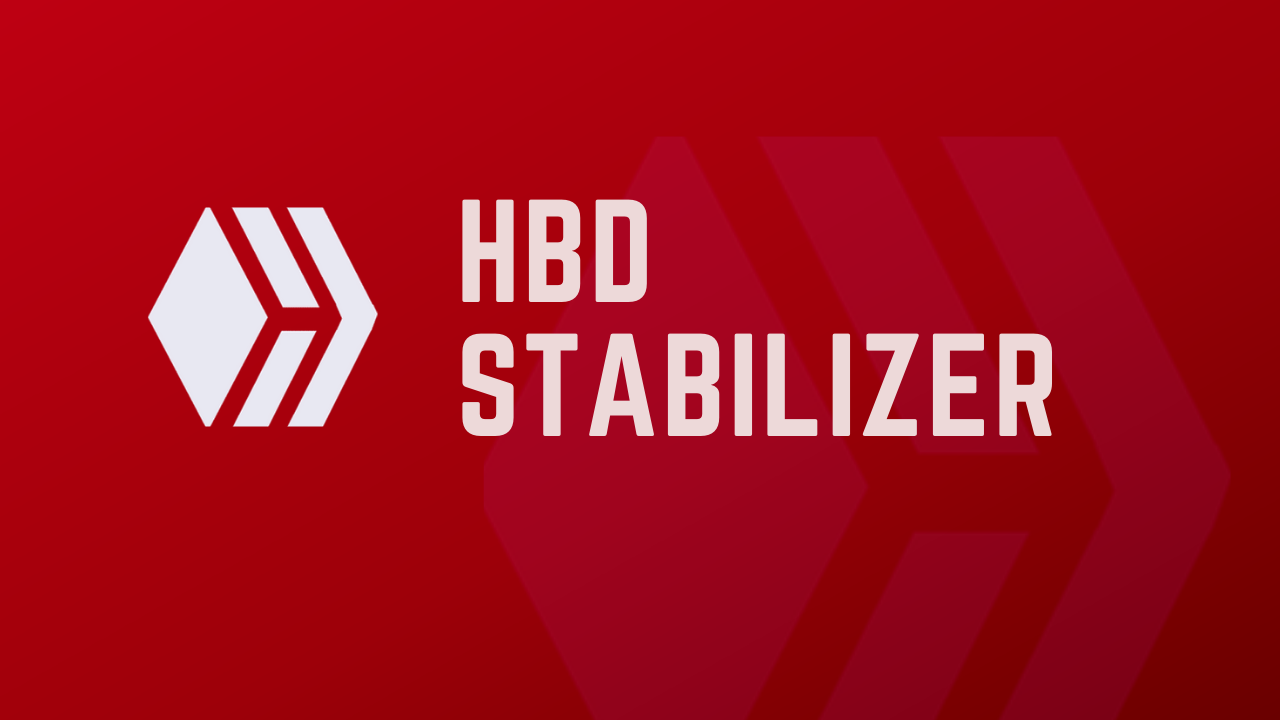 I have posted some data previously on the stabilizer, but its has been almost four months since then, time to revisit.

The two ways conversions for HIVE/HBD are active now, so its is interesting to see the dynamics in both directions.

The stabilizer receives funds from the DHF in form of HBD. If the price of HBD is higher than one dollar it sells that on the internal market for HIVE, then sends the HIVE to the DHF, where it is converted to HBD instantly. If the price of HBD is bellow the peg, the stabilizer converts HBD to HIVE and then sells the HIVE on the DEX (buys HBD) and send back the HBD to the DHF.

The @hbdstabilizser started operating at the end of February 2021, and we will be looking at the data since then.

First let’s take a look at the received funds. Here is the chart. 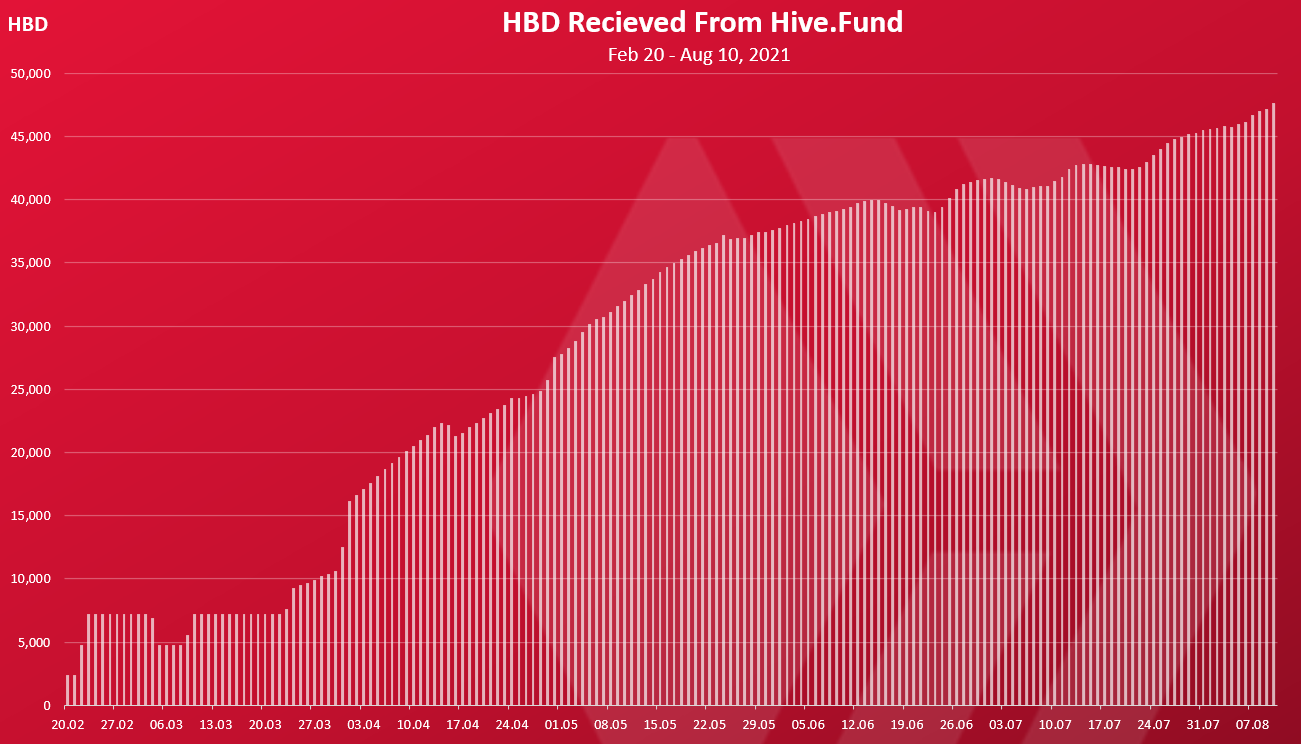 As mentioned, the @hbdstabilizer started receiving funds for the first time on February 20, 2021. At first it was only 2.3k per day then as the DHF fund was growing so those the overall funds, and now it is close to 50k HBD per day.

A total of 4.96M HBD was sent to the @hbdstabilizer in the period.

The DHF fund now holds almost 5M HBD, up from under 1M in 2020. Note that only 1% of the total amount of funds can be sent per day. The increase of the DHF budget is because of the conversions of the HIVE that is in the DHF, but also from the profit that the HBDStabilizers makes.

Funds Sent To The Hive.Fund

We have seen the funding of the @hbdstabilizer now let’s take a look at the funds that it has sent back to the fund. 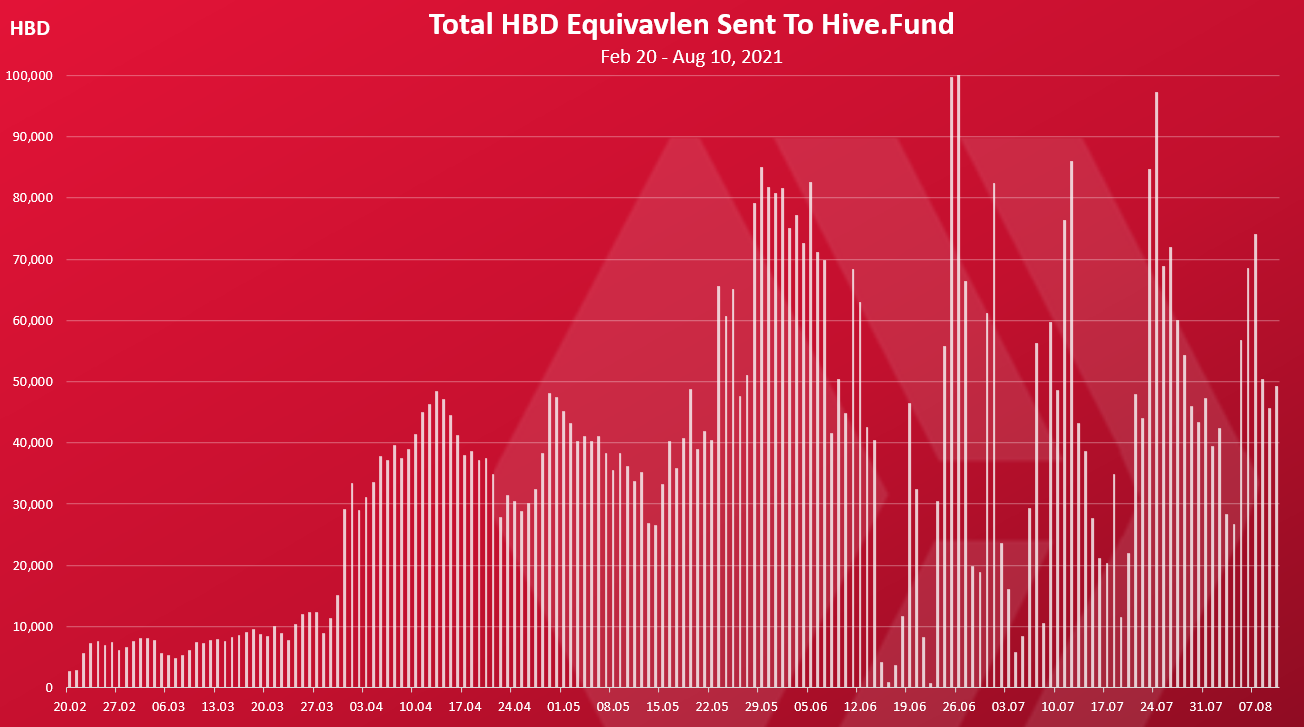 Note that funds are sent to the @hive.fund in form of HIVE and HBD. I have converted the HIVE rewards to HBD, for easy representation and comparison. The numbers are approximate because of the conversions.

As mentioned the @hbdstabilizer sells HBD for HIVE on the internal market and then sent the HIVE to the @hive.fund where it is instantly converted to back to HBD. It is also buying HBD with HIVE when the price of HBD is bellow one dollar and sends that back as well.

The chart above is more dynamic than the funds received, but overall it has an uptrend. The amounts of HBD sent are dependent on the HBD price, so when it is higher so those the funds, and the opposite.

We can see that up until the end of May the trend was mostly up. Then in June some ups and downs, and the numbers have been oscillating since then, mainly depending on the price.

Overall, in the period above a total of 6,26M HBD equivalent was sent to the DHF fund. If we compare this to the 4.96M received it is a profit of 1.3M HBD.

Now let’s take a look at the market activities and how much selling HBD/HIVE the stabilizers has been doing. 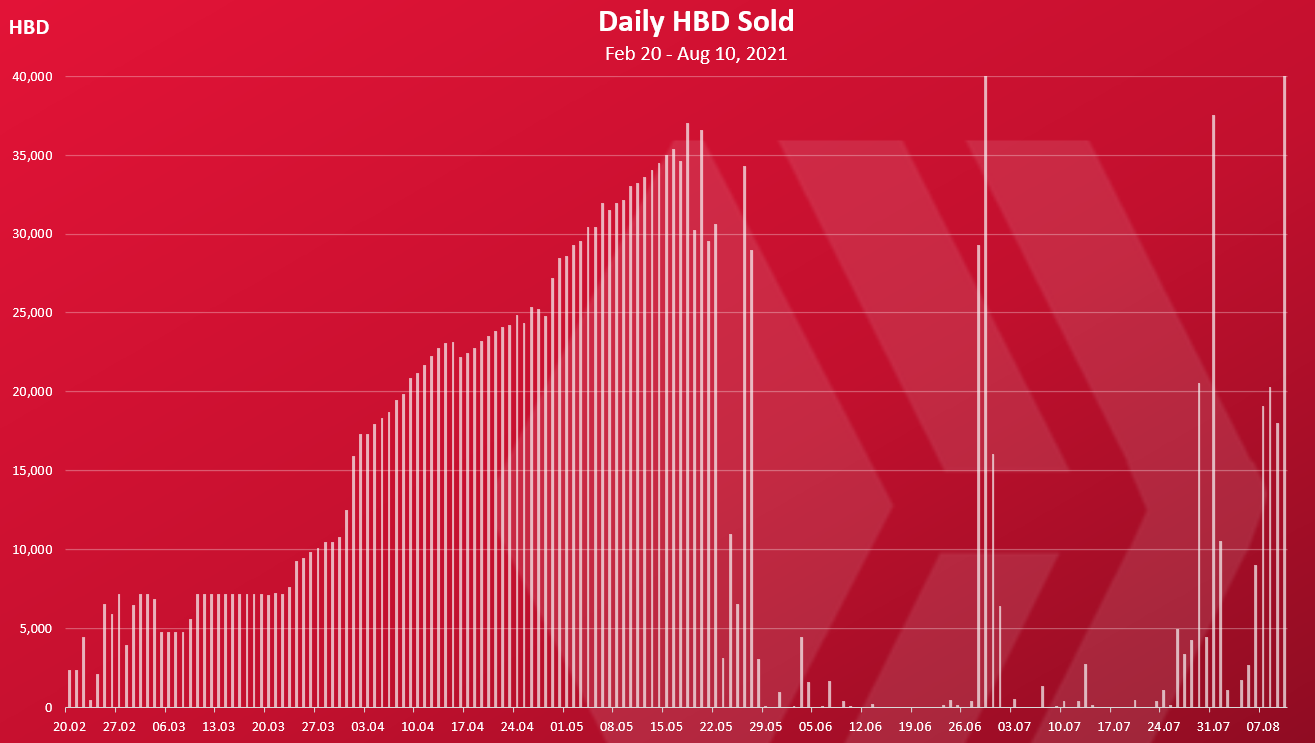 We can see that until May the numbers for the HBD sold kept going up and reached 35k per day. Then the peg was reached the selling stopped. In the last days we have HBD selling again, going up to 48k HBD per day, a record high.

A total of 2M HBD was sold on the internal market in the period above. In HIVE equivalent this is around 4.3M HIVE that has been bought from the market and sent back to the DHF.

Selling HIVE happens when the price of HBD is bellow the peg. Here is the chart. 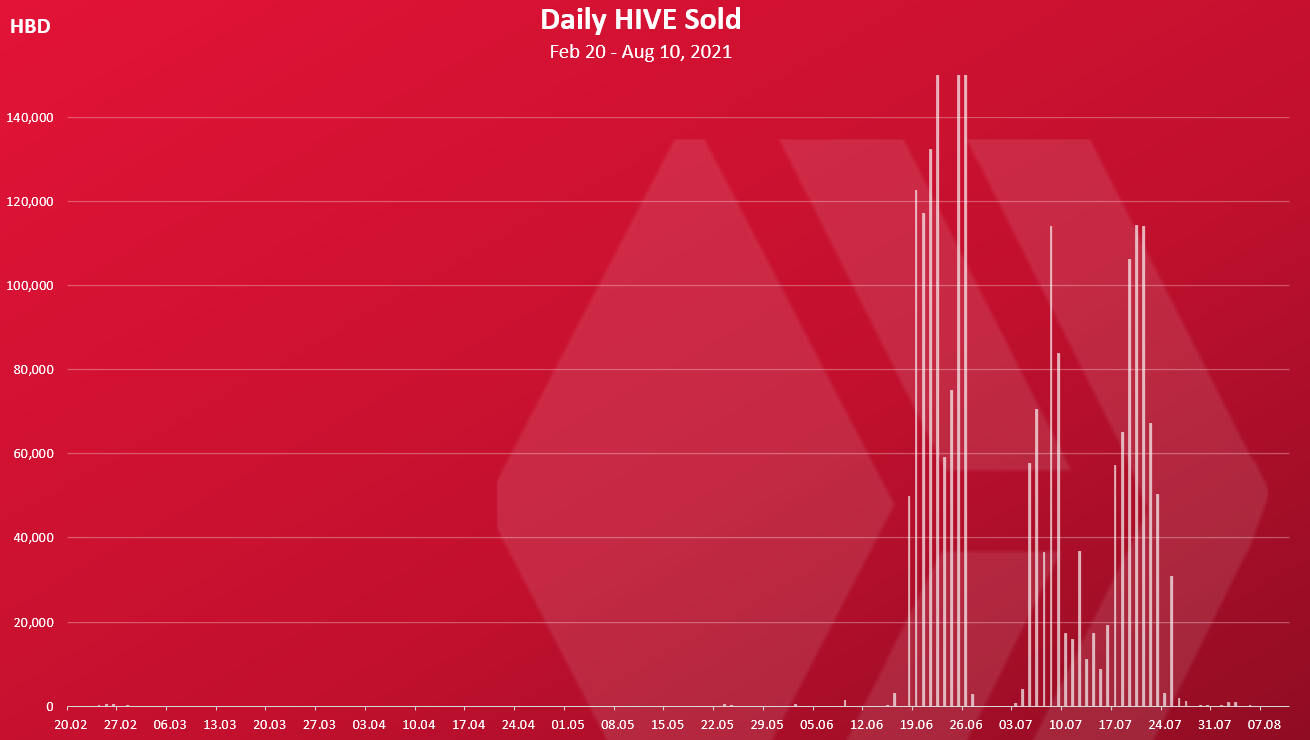 HBD to HIVE conversions were enabled after the HF. Before this we don’t have any type of these transactions. We can see that in June there were few occasions when more than 100k HIVE per day was sold on the internal DEX for HBD. That’s quite a lot. A few more spikes happened in July as well.

From the chart above we can conclude that HBD under the peg happens on rare occasions but with high volume. Probably some large accounts offloading on the external exchanges, mainly Upbit.

A total of 2.1M HIVE was sold from the @hbdstabilizer as a support for the HBD peg. When compared with the buys, around 4.3M, we can see a difference in positive for 2.2M HIVE. This corresponds with the overall profit that the stabilizer has made sending 1.2M HBD more to the DHF.

The final goal is for the HBD to have a stable price, and that has been achieved with relative success in the last two months. For reference the price of SBD is now at 7$.

The DHF fund is now the biggest holder of HBD (5M) and it keeps increasing its holdings. This was not the case a year ago when it had under 1M HBD, while Upbit had more than 3M HBD. Since the DHF fund is the biggest holder now and with growing trend it is to be expected that it will control the price of HBD in the future, maybe with some short term fluctions.

What would help HBD at this point is more liquidity and more exchanges listings. At the moment HBD is traded two exchanges only Bittrex and Upbit, with Upbit dominating in terms of volume.

A further integration with Hive Engine would also be great, as the home grown stablecoin that can serve Hive Engine. A HBD-DEC and HBD-SPS pairs for example.

Becouse there is more buying pressure then the stabilzer has selling power ... for now :)

Nice explanation because I had a lot of questions regarding HBD, this was because of an experience I had few weeks back. My HBD increased 50% in value which gave me an added 50% increase. My HBD was $10 but when I converted it to Hive the value was $15. I was scared because it seemed the HBD is that volatile but read this now, I feel better.

Thanks that’s nice to know

So confusing.. why not just get rid of HBD?

I'm glad the HBD is heading towards being a real stablecoin, BTW is the 10% APR for holding HBD connected to this process?

Looking forward to when HBD pegs back to 1:1 to swap my USDT for HBD