This is a report for the top Hive earners by category for April 2021. 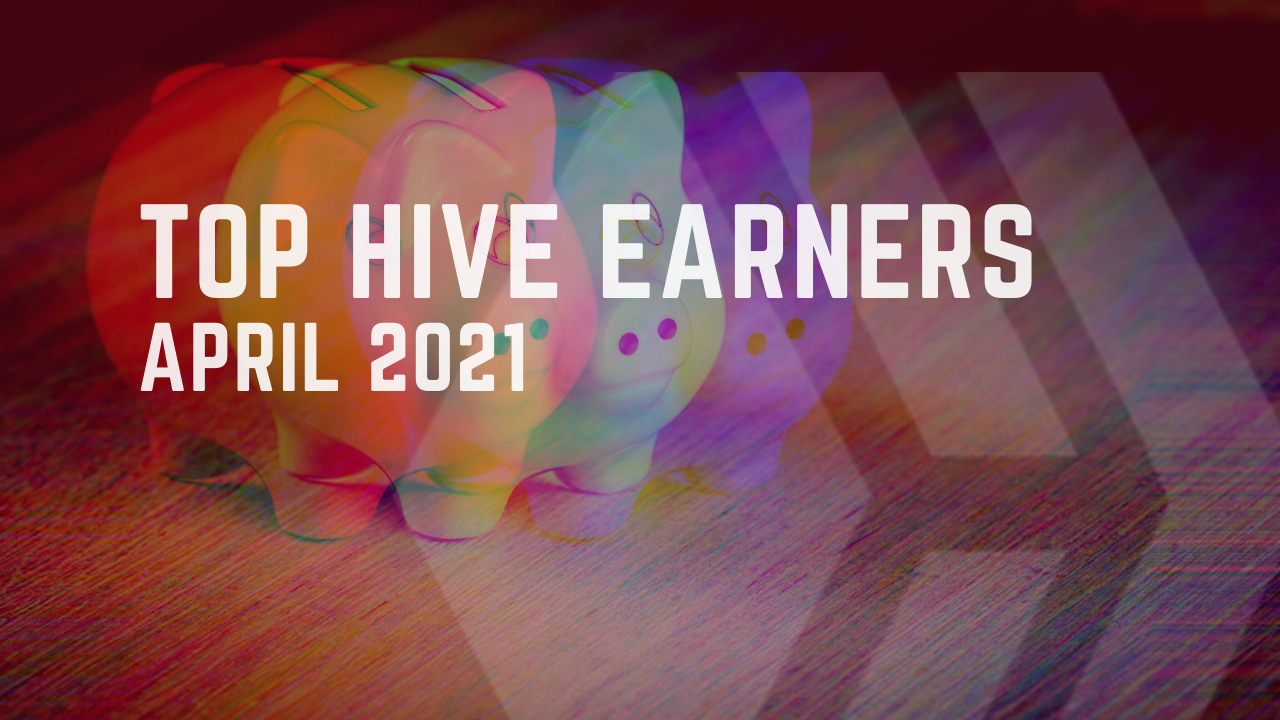 Here is the chart for the top 20 Hive authors that earned the most. 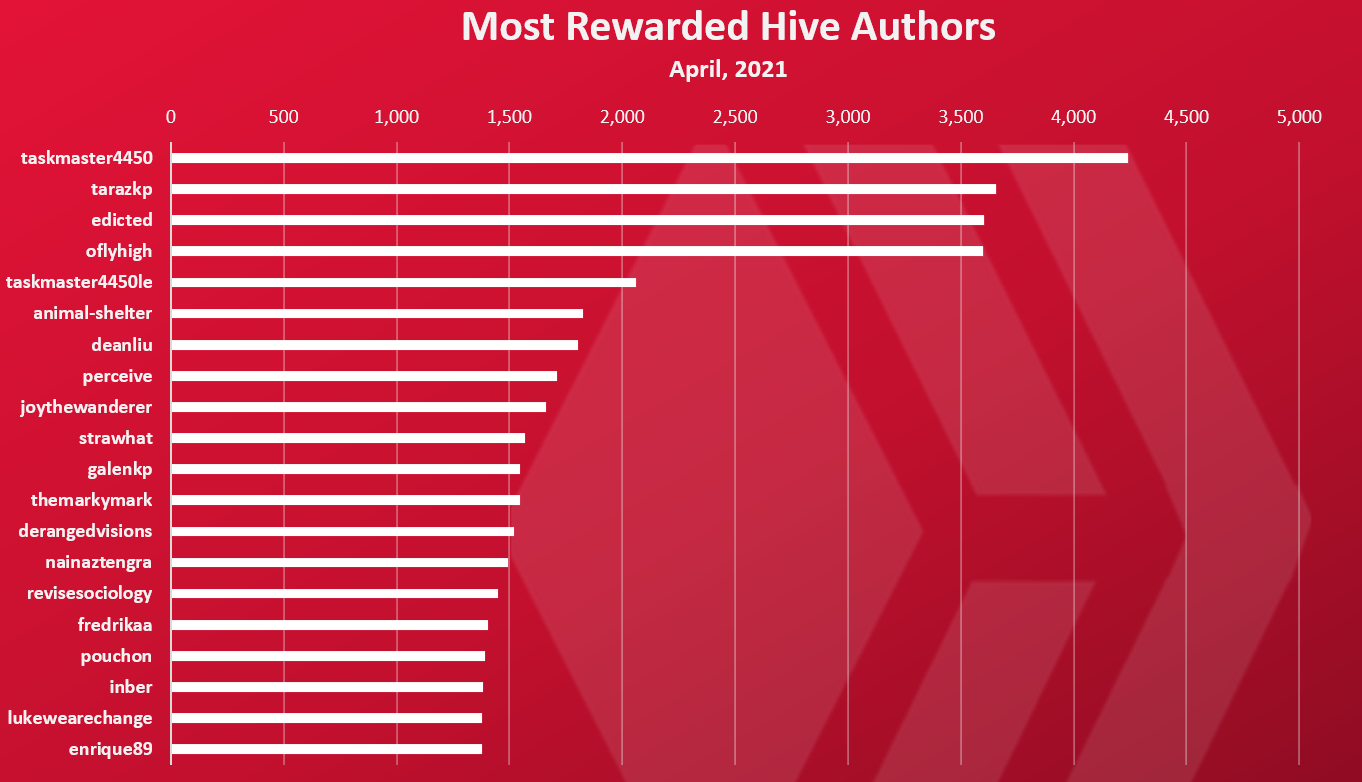 Note: These are not totally accurate numbers because there is a conversion on HBD to HIVE and VESTS to HIVE, for simplification.

Author rewards are one of the most know in the blockchain as a lot of users are attract for them.
@taskmaster4450 is on the top with just above 4k HIVE equivalent earned, followed by @tarazkp and @edicted.

Here is the chart for the top 20 Hive curators that earned the most in the month. 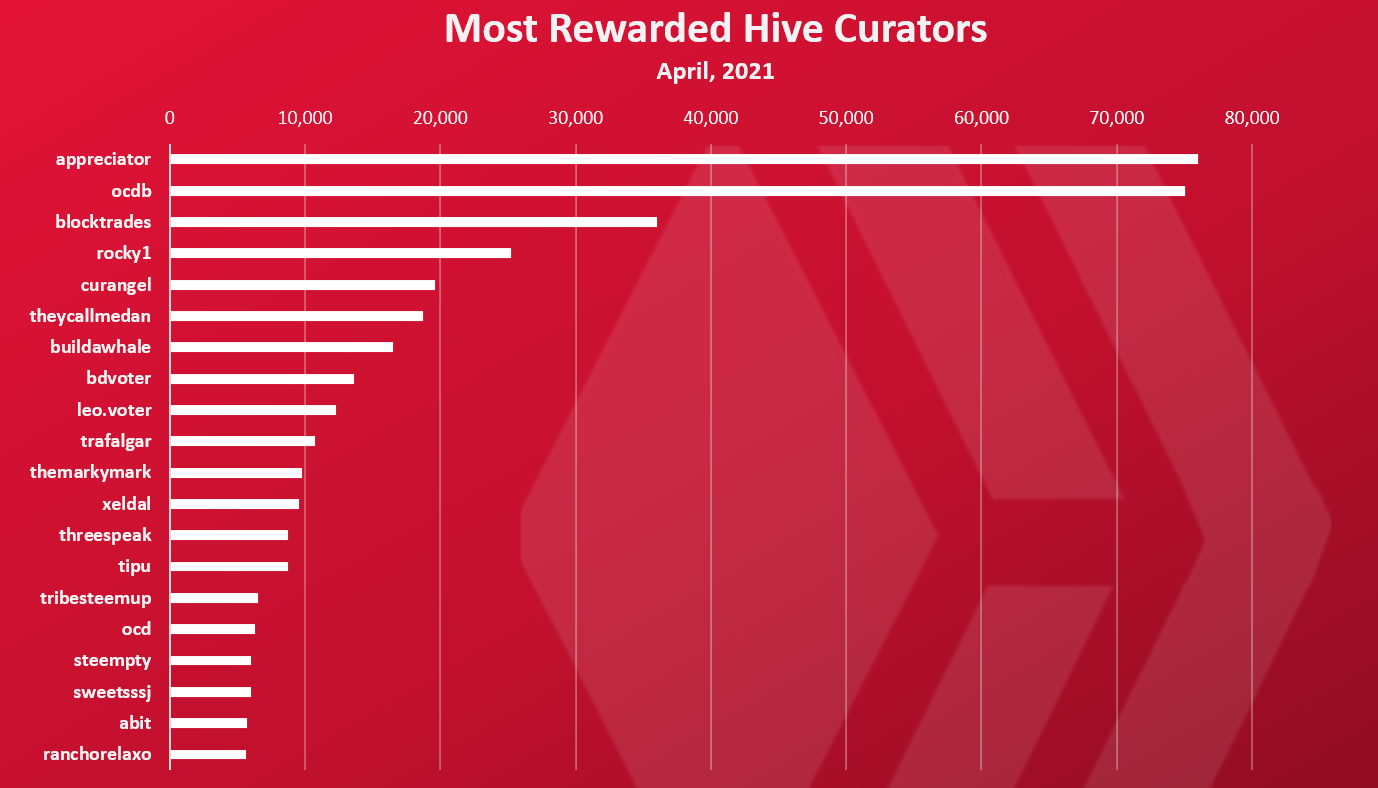 The note from the authors reward applies here as well. The numbers are aporximate.

The account above are the biggest curators on the Hive blockchain. Hope they will do a great job in curating and making this place grow. 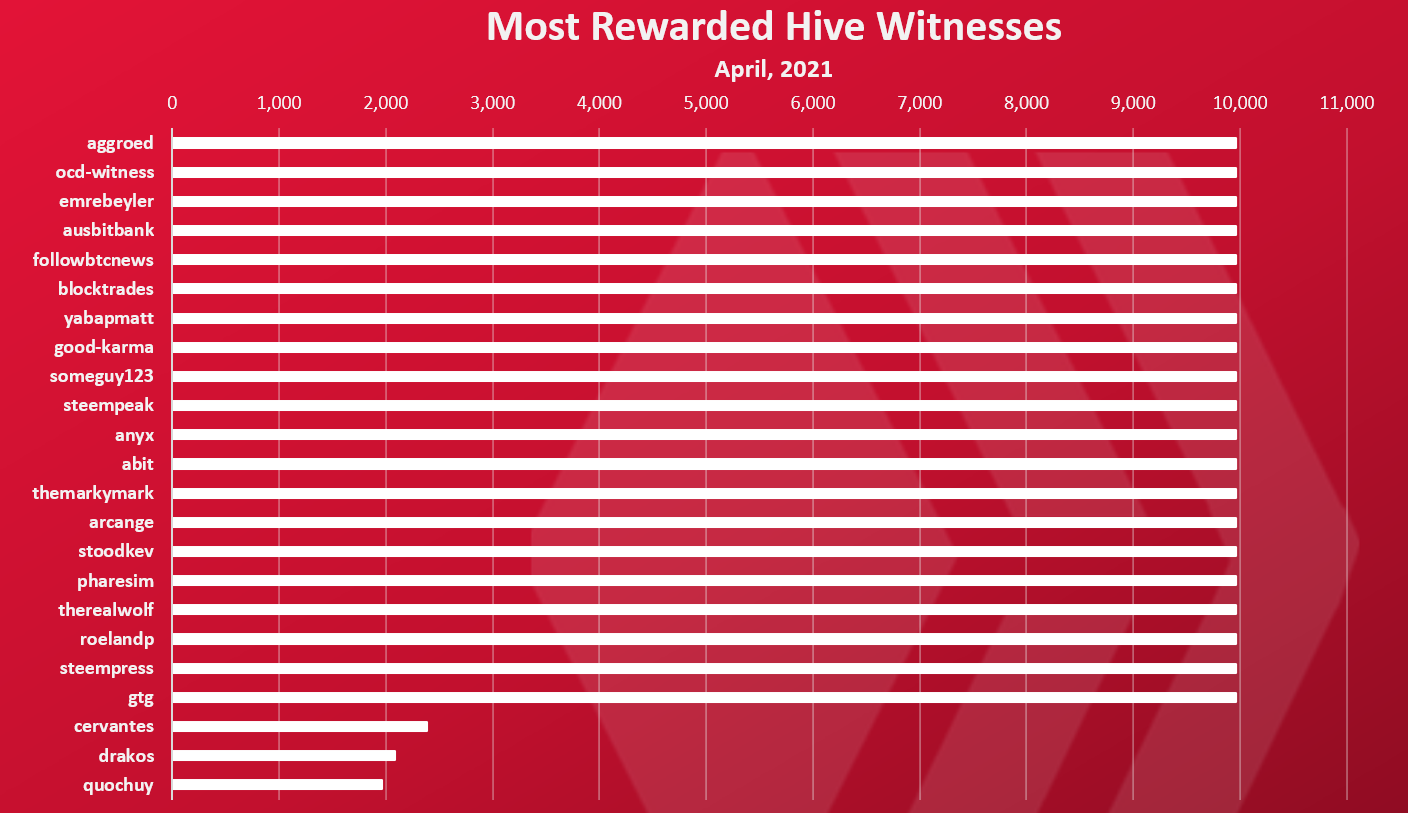 I have included more than 20 accounts in this chart to show the drop in earnings after the 20th spot. The top 20 are earning around the same amount of HIVE (HP), around 10k per month.

There seems to be a healthy competition among witness now, around the 20th spot.

Accounts that received funding from the DAO in the period. 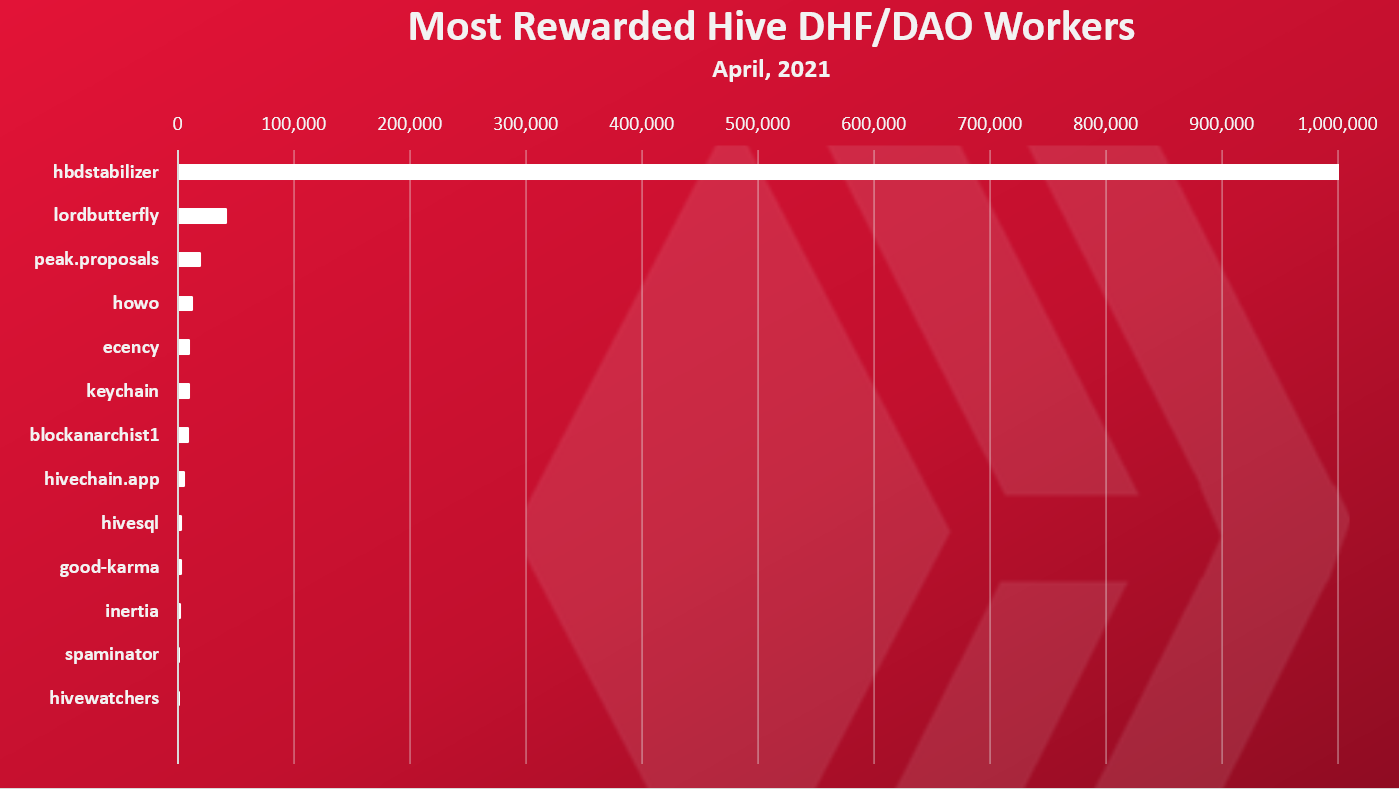 DHF workers are paid in HBD, but an approximate conversion is made here in HIVE as well for simplicity and later comparison. The numbers are not exact but approximate.

The special @hbdstabilizer is on the top here, although technically these are not earnings but just payouts who are later returned in the DAO. Using blockchain conversion rate for HBD to HIVE, the @hbdstabilizer in March 2021 has payouts of around 1M HIVE equivalent.

The other funding for the other DHF proposals was on and off in the period, but still there is some funding happening. The marketing proposal, PeakD and howo’s core blockchain development, just to mention a few of them.

From the data above we can compile the payout for a single ranking on overall top earners on the Hive blockchain in April 2021.

Here it the chart. 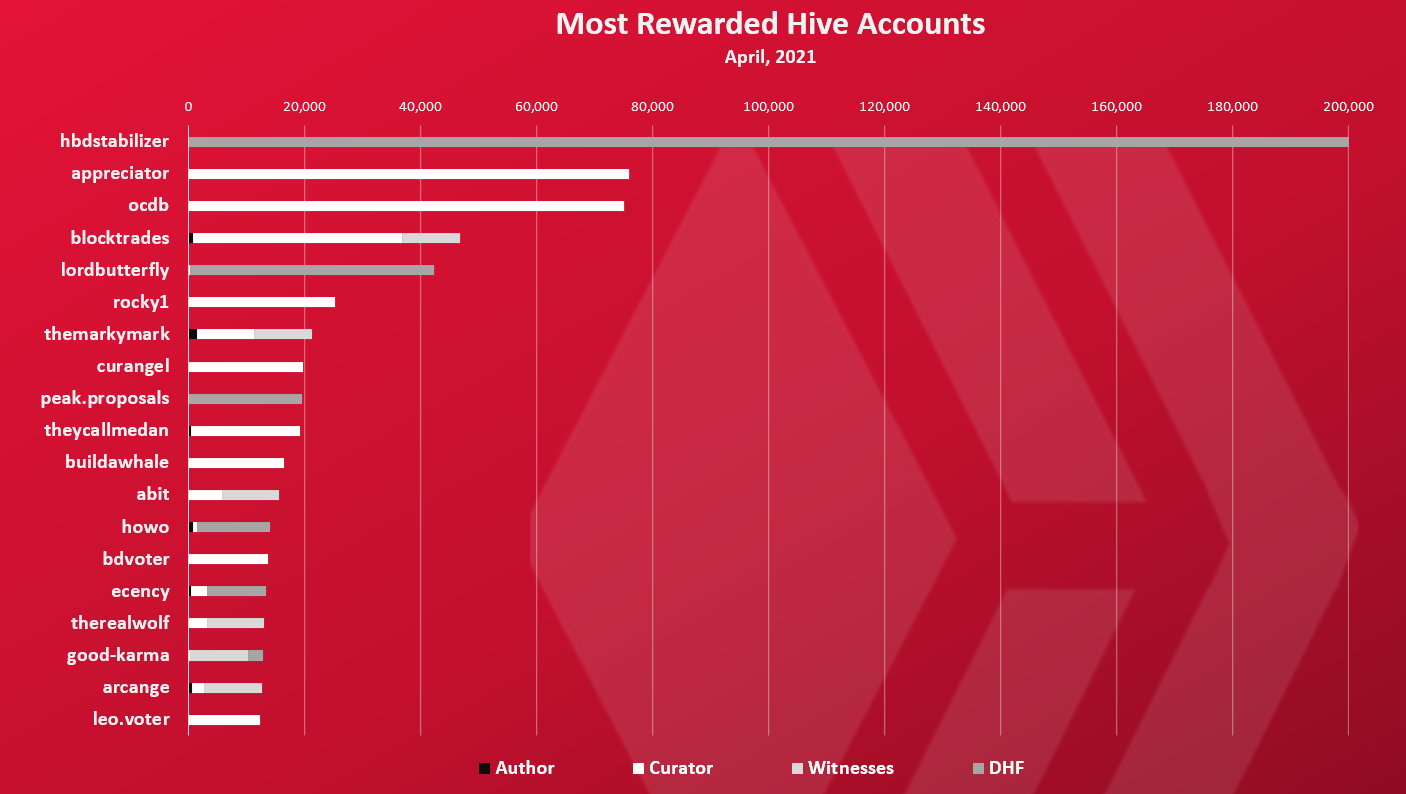 Note: These are not totally accurate numbers because there is a conversion on HBD to HIVE implemented, and VESTS to HIVE, for simplification.

I have separated the different earnings for the top accounts accordingly.

The @hbdstabilizer comes on top here as well, although technically these are not earnings. Meaning the @appreciator and @ocdb accounts are on the top as curation accounts. @blocktrades and the @lordbutterfly marketing proposal is in the top as well.

The author rewards are colored in black, and we can see that in the top earners there is not much from the author rewards. The top authors were around 4k to 5k per month, and the last on the list above, is just above 10k with earnings.

The DHF rewards and the curation category are dominating in the top 20 HIVE earners list.

Holy shit I DID NOT expect to see my name on that author list.

I think a second chart for the DAO excluding the HBD stabiliser might be a good idea!

Congrats!
Agree on the DAO, the hbdstabilizer makes others out of proportion, might just exclude it from the chart going forward, and just note the earnings/transfers in a text.

i think that'd be better - you get no sense of scale with the best of the rest otherwise!

Congrats, tell me your secret man :-)

I think powering up and networking help a lot though.

Thanks!
What do you have in mind?

Always interesting to see the numbers :)
I wonder how many people clicked to upvote this but did not even take the time to read what you wrote, or even bother to click on the article.
This is my main concern, blind upvotes..proof of mouse click...
Thanks for this great visualization of the hivedata!

There are autovotes for sure, but there are real people reading it and commenting obviously :)

Of course, I just wish it would be more users :)

It is an impressive list, these authors are always standing out, I like to see this competition between the base projects that make up the HIVE Blockchain. These are very good statistics. Thanks for sharing.

Awesome post thanks @dalz, so much useful and quite eye opening content in there. If you don't mind my asking, where do you source all your data from?

I think I need to channel my inner data nerd and start producing interesting statistic posts like this one. Big thumbs up from me.

Awesome thanks @dalz. I need to dig into it. 👍

Great analysis, wow, the top earner's list and the top curators stood out, I saw some good authors (the list didn't change much but there's been a lot of movements in positions) and effective curator accounts. The DAO too was worth the lookout. Cheers

There is more movement for the top authors in the 10 to 20 positions then in the top 5 :)

Looks like authors are left out to dry a bit haha