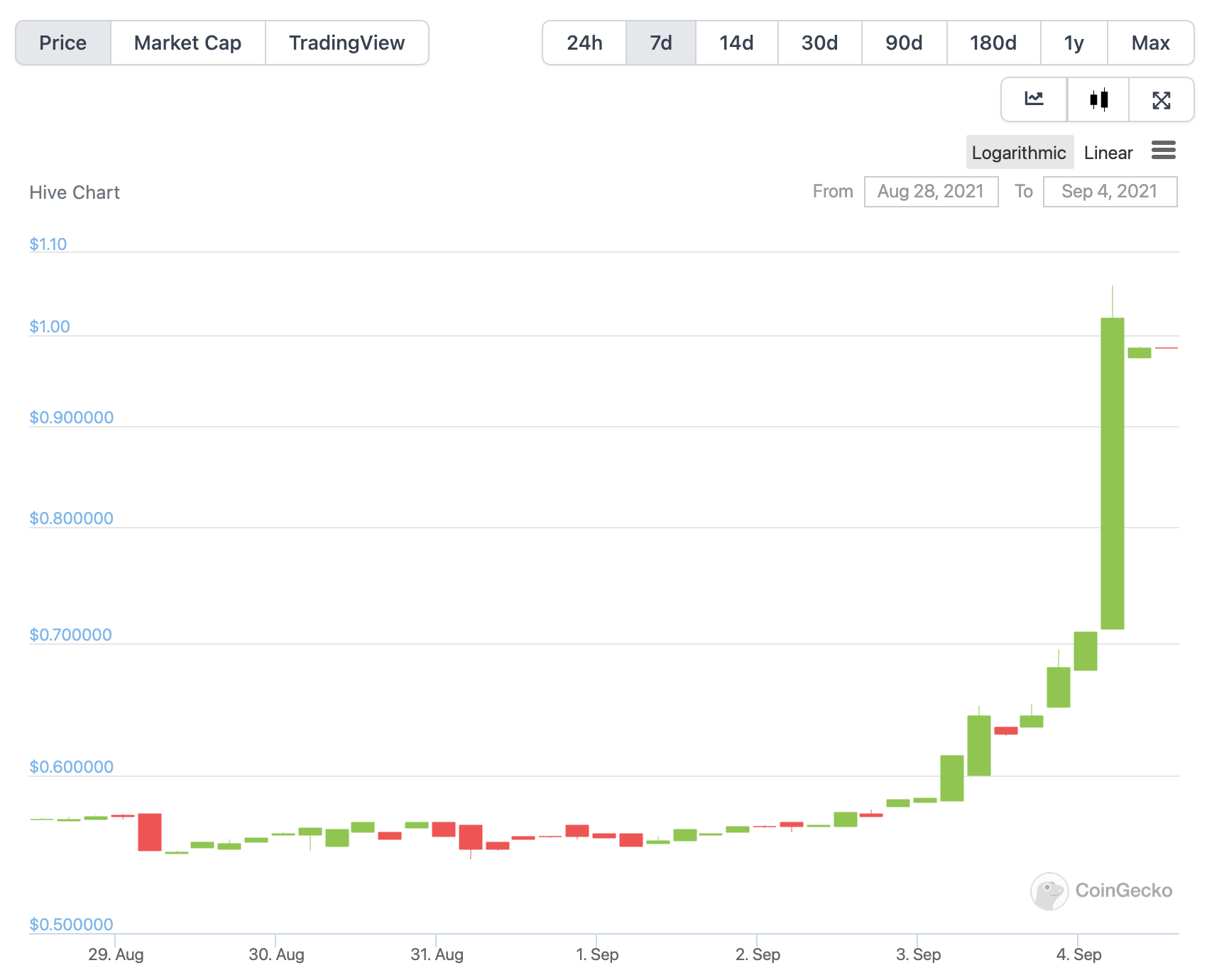 Yesterday I wrote a piece about the case for a $8 HIVE. During the night, Hive jumped 50% and it was briefly traded above $1. At the moment of writing it's just 3 cents below that level, exchanging hands at $0.97.

The upwards move was significantly bigger than what I was expected, and faster. The biggest exchange, Upbit, showed a volume of about 105 millions of HIVE (trading at $1, that would be $100 million) during the breakout.

The main technical reasons for this have been already mentioned in yesterday's article (huge demand generated by new accounts created around Splinterlands, and HIVE leaving exchanges being the top drivers, IMHO). So we kinda expected that. The correction, on the other hand, is surprisingly small, suggesting there might still be some room upwards.

The most important question at this moment is: how many holders are willing to sell at these prices (or are forced to do so, because they need liquidity), and how many are willing to hold?

If you have asked me this two months ago, I would have answered that a significant majority wants to sell. There is a certain user pattern here, that literally blogs for money, for immediate value (nothing wrong with that, by the way). For them, an overnight 50% increase in revenue is close to magic, and can result in life changing money.

But the huge wave of new accounts created during the last few weeks is of a different breed. We have no information about their holding / investing patterns, but we do know they're not here to blog for money, primarily, they're here to play a game.

If their behavior is anything close to other gaming platforms, in which the stakeholders are medium to long term participants, we may see a lot more hodling than we're used to see around here.

You got the idea.

As always, this is not financial advice, DYOR and never invest more than you can afford to lose.

I'm not selling yet. I think it can go higher and will only cash out when I need the money for something specific. In any case I will keep most of my HP as long as it is viable to do so. I just hope this raises the profile of Hive. All those new Splinterlands players give great potential. I know some say they will just play the game, but with that many you are going to get a mix of people.

I also noticed here that the UK seems to be the biggest source of visitors to the game. That surprised me.

This is wonderful news! Hope HIVE will keep on rising until the end of the year and beyond, hopefully no more setbacks or downhills. Keep up the good work as well! :)

Many thanks and likewise, obviously :) Let's see what happens, eventually it will break out.

You're most welcome! Thank you very much for all your support here on HIVE again (and not only)! Keep up the good work, as usual! :)

I now have you as another must read every day. Thanks.

I have sold 50 hives and I am ready to buy back as soon as the price drops a little more, even if I'm not so sure it drops dramatically, I would like to wait for it to reach $ 0.60 and invest in $ 50 is about to start the altcoin season, in my opinion there are only a few days left to buy at low prices. However, I was too happy to see hive at $ 1.05, in fact I hunted all my excitement on the social networks of Hive Italia that I manage ahaha

Suddenly a $1 hive looks boring. This is something most would have wished for few months back. Interesting how quick sentiments can change. Now what’s next

Might look boring for someone taking this thing like a video game, or like a casino. For someone who keeps his head cool, this looks like a relevant milestone. It's the result of real causes and by maintaining those causes, we can witness similar results. Causes include: discipline, patience, humbleness and consistency.

I get that it’s a relevant milestone, and I agree with all of that. what I’m saying is that $1 is still under what Hive is really worth.

I agree, but we can still reach $3, anything is still possible

I wish I could say that my recent return to blogging here regularly was the result of deep insight into the HIVE economy :) No, I just got my shit together again!

I don't watch the dollar price particularly. At the moment, I am selling what I'm earning, but to bring some balance back to my crypto portfolio, which is still HIVE heavy. Once it's balanced out, I'll be holding and powering up again (and any increases in the price vs BTC or ETH means that will happen sooner rather than later).

What am liking is the general community response. Early times but the maturity is there. No one is in a hurry to sell and most are just going on as if nothing major is happening

In theory, if buying continues to increase, we may even hit $100. Or the moon.

i think sharks will raise hive about 2 3 even 4 dollars . but flying more than that, I think it's very difficult

because I see on coinmakecap the cash flow in hive is not too much to increase rapidly. So I think the number 3 dollars is a good number for ATH to be able to handle.