dragosroua (74)in LeoFinance • 9 days ago 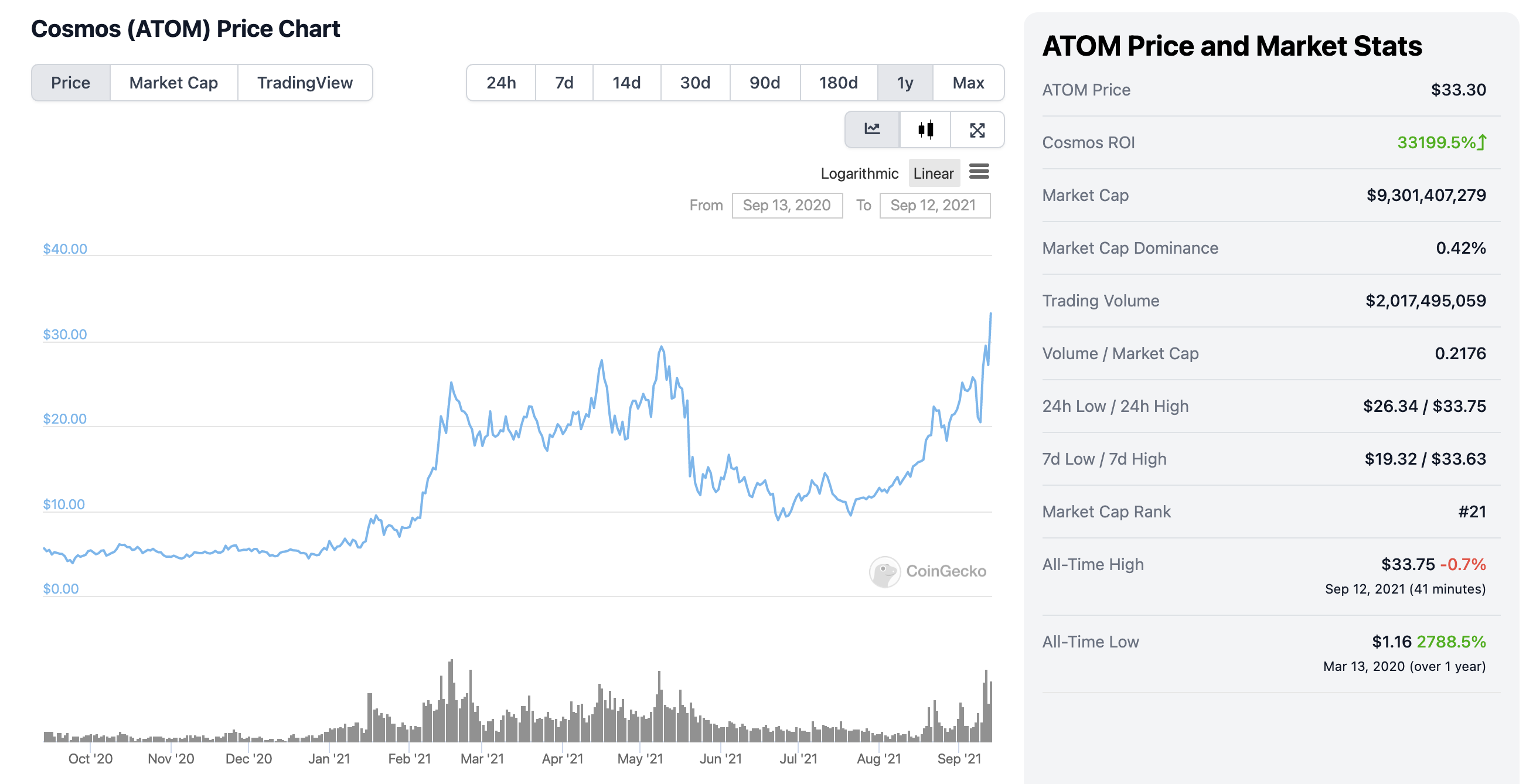 I don't usually post about other projects that I'm watching in the cryptosphere, but this one I think it's important. I also noticed that are quite a handful of other fellow Hivians interested in this, so maybe it will be useful for them too.

After ranging for almost 7 months, ATOM broke above resistance today and it changes hands for about $33, at the moment of writing.

A quick reminder for those who don't know what I'm talking about. Cosmos is both a blockchain, minting the ATOM token, but also a software platform, an SDK that everyone can deploy and create their own PoS platform. That SDK is used by Binance, Crypto.com, Osmosis, Akash and a few other major players in the crypto world.

The most important innovation of this blockchain, the IBC bridge, was rolled out a few months ago, and, in my opinion, the current breakout is riding on that wave. IBC allows seamless transfer from a Cosmos-powered blockchain to another, extremely fast, and with ridiculously low fees. Add to the entire mix that the smart contract engine that powers Cosmos, tendermint, is capable of running any Ethereum smart contract (if it's deployed, of course) and you start to get the picture.

Another reason for which I decided to make this short post today is to outline the value of consistent building. I personally met the founders of Cosmos at a conference in Bucharest, in 2017. Although they raised $17 million during the 2017 ICO craze, they didn't sleep on that. They continued to grind and build, and build. 4 years later, Cosmos itself has market cap of $19 billion (and I'm not even counting the other Cosmos-powered blockchains). They always stroke me as very modest and consistent, something very different from all the boasting and bragging you see in this space.

If they did it, I see no reason why Hive won't be in a similar place in 3 years. After all, Hive is just one year old.

I was super happy to see this today.
I have buying up ATOM for the last 2 years, but since July I have been just been working my OSMO game and building up my LP there across multiple IBC coins.

I am always amazed at the people that don't know about IBC/Cosmos.

Glad to see another Cosmonaut here on Hive!

@dragosroua, you've been given LUV from @simplegame.

what is best to do with my little stash of ATOM?

With it being at an ATH. If the stake is small enough I would just sell and enjoy the profits.

If you are interested in DeFi than you can use it on the OSMO network.

hey thanks. So I just added the keplr extension and tried to send over a minimal amount of atom from bittrex. It hasn't turned up yet... is it quite slow sometimes?
Might try mucking with osmosis if I can face the confusion ;p

I transfer from Coinbase my Atom to KEPLR and took no time at all. No idea how long bittrex takes on things like that.

Once you have your tokens in Keplr and use IBC to mover coins around to different blockchains it is very fast.

Sometimes OSMO will slow down around the daily EPOCH (payout) but I just wait about an hour afterwards and everything is near instant.

Another missed train for me... Well, I guess I'll keep adding coal to my trains.

Hive may be at the same way to reavh a certain and decent amout but first make sure hibe will be demanding in the market and trading vigorously.