How Much Money Do You Really Need? 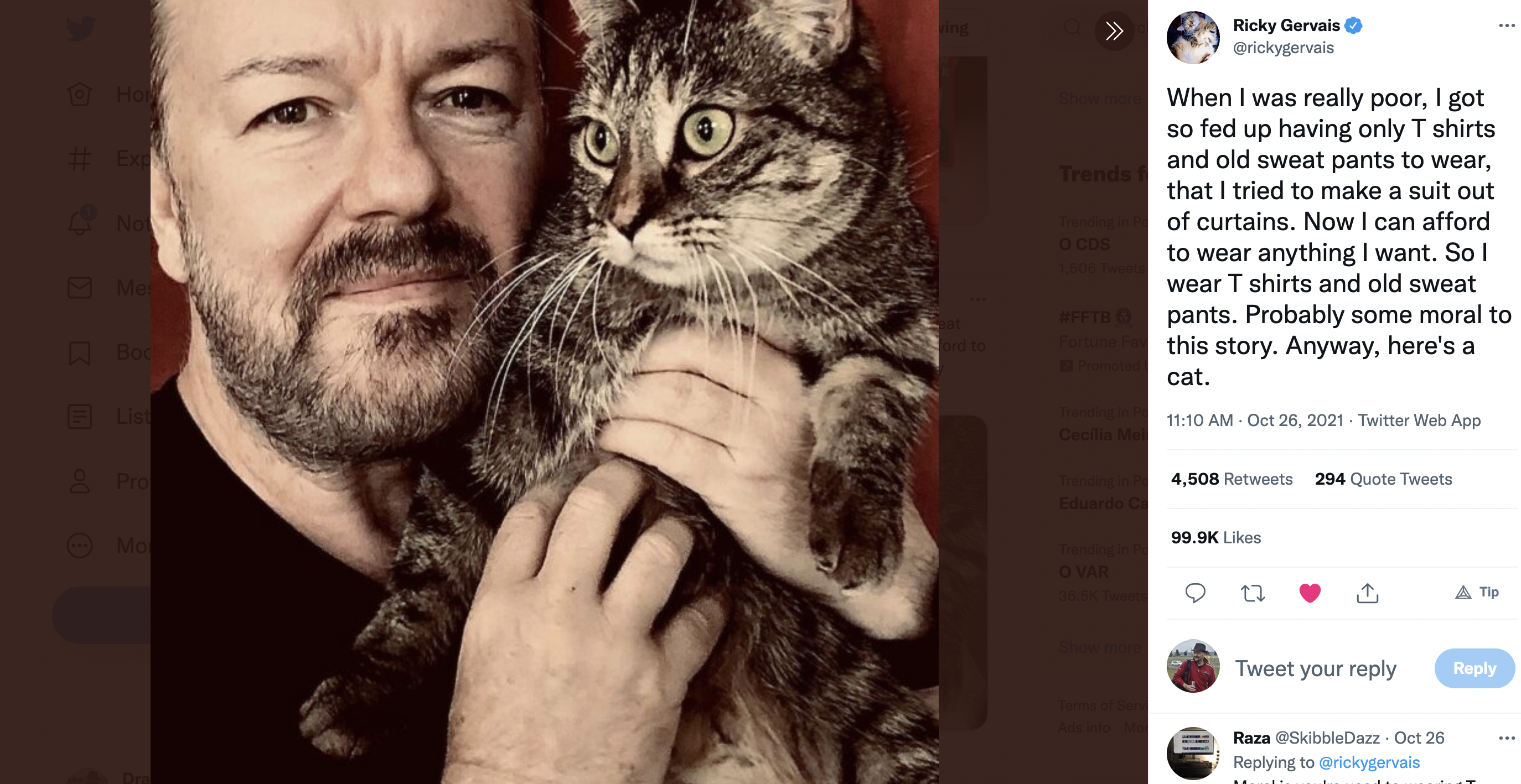 In case you don’t see the featured image for this post, I’ll summarize it for you: it’s a Ricky Gervais tweet, with him holding a cat, and this caption:

Far from me even the thought of trying to find some moral to this post. But I find it real enough to write about it in today’s article. Also, I resonate a lot with this story.

Just like Ricky, I’ve been in that place more than once. I dreamed to have the most beautiful car in the world, the nicest house, the best lifestyle. I hustled hard for this. Decades. At some point, I made it.

Guess what? After I drove the car, after I lived in the house, after I’ve experienced a little bit of that lifestyle, it didn’t feel that great. I mean, it was nice, no need to lie about this. At times, it was even great. But it wasn’t how I projected it. It wasn’t quite as I expected it.

You see, we create in our minds the picture of the “perfect life” and then strive to achieve it. We tell ourselves a great story, in which we are the main character, and then act upon this fantasy, start to work towards that goal, to live what we think it’s a perfect life.

But there is no such thing as a “perfect life”, it’s all in our head. It’s just a story we tell ourselves while we go around in that normal car, while we rent an apartment instead of owning a big house, thinking we will feel different when that story will come to life. No, it won’t happen like that. In case we really make it, we will feel displaced. Not at ease. Somehow guilty and disoriented. “Who the fuck is this person driving this expensive car and why does she lives in this huge house?”.

A sudden change in our lifestyle is stressful regardless of its direction: up or down. Winning the lottery will wreck just as much havoc as a sudden misfortune. It will throw us on a different lane, one where we have no idea how to drive.

That’s why I’m not following that route anymore. I know how it feels.

From what I wrote so far you may get the impression that I’m advocating a life of scarcity. No way. I do believe we need money to live a fulfilling life. I just don’t think we need that much.

It all boils down to the concept of financial resilience – which is not financial abundance. Financial resilience is about maintaining a steady income no matter the surrounding context. Financial resilience makes it possible to live a good life in a different country, for instance, or when the economy takes a downturn, or when you can’t (or don’t want) to work as much as you used to. It’s not luxury, as luxury comes at a cost. The cost of maintaining it, the cost of getting attached to it, the cost of adjusting to whatever other people think or establish the latest trend rich people must follow is. Not liking that. At all. It’s tiring.

I’d rather stick to my T shirts and old sweat pants.

But it wasn’t how I projected it.

It will never be. The only chance that could become true is if the projection would manifest almost instantly. Ultimately, there's no perfect life and more stuff is not the ingredient to ultimate fulfilling. If it was as such we wouldn't have so many depressed millionaires.

Hey mate, sorry to jump in off-topic.
Do you mind reviewing and supporting the Hive Authentication Services proposal? That would be much appreciated.
Your feedback about the project is welcome too.
Thank you.

Supported! This looks really cool, I will look closer into the protocol, but it's certainly a very good addition to the ecosystem, Wishing you all the luck with it!

Thank you for your support and feedback, really appreciate it! 👍

This is a very difficult question, because a huge area of sustainable enjoyment has never been explored.

Instead, we have hollywood stories. And, they are just that, stories.
Made up to turn us into consumers.
The rich lifestyle. The big house. The expensive car.

Now we are getting the (supposedly) opposite story. These people living in tiny homes and being happy having given up on all that "stuff".

And then, we are also never taught the reality of finances.
How many people are taught that what you should strive for is paying for a house, in cash,
and having passive income to pay the rest of your expenses?

"Financial planners" talk about saving up millions of dollars to retire.
Why?

When what you really need is a good, well built, heating and cooling efficient house,
a garden (and a greenhouse now) and a few hundred a month.

These things should cost a man less than 5 years of his life.
The central banks have really screwed us over.

The central banks have really screwed us over.

That's what central banks (and banksters) are created for

There is no currency as valuable as goodwill, nor any coin I treasure more than incisive criticism. I never want to do anyone wrong, and every time I do, it is because I am wrong. As I earned sound critiques and embraced them, I stumbled on the fruit of forthright humility and beneficence, because service to others creates goodwill.

No stash of goods or money can succor you in a crisis if your community is intent on your suffering. Having seen for yourself the lack of value of money, I hope you attain that real wealth only the love of your betters can provide.

I'm not really driven by money and possessions, but of course I need enough so I am not able to afford the basics. I do okay really. We have a couple of old cars and I don't want a 'Lambo'. I'd be happy with a Tesla and it wouldn't have to be a top end one. Anyone would tell you I'm not into clothes and I can't imagine having a really fancy watch that I would be scared to wear. If I did come into lots of money I'd build my dream eco house with a bit of land and ensure the family were all secure. I think money can spoil people and you need to resist the temptations. I don't think money in itself brings happiness, but security matters.

Think of how much time the wealthy have to spend tending to all the stuff they have. Unless you are in the mega wealthy class where you can pay people for handle it all, we end up with the Carlin skit about stuff.

Having to clean, insure, take care, and protect it.

I honestly wouldn't mind a Ford Raptor that I have to clean and take care of it by myself :)
The more cluttered one's life becomes the less happier though.

I wouldn't mind a LUCID AIR

It's the first time I hear of it. Seems to be a great car.

You bet. Show me an EV which I could want more than this gorgeous beast

I don't know of any. Probably the new S Klasse from Mercedes. Haven't checked its pedigree though.

The important thing is that wanting to achieve all of those, you did what it took to achieve those goals. "The journey is the destination."

Be successful in this life is mind set. Maintaining a steady income is good, income that yield profit every day.

I'd like not to have professionally work for living. So I could live anywhere I'd like to 😁