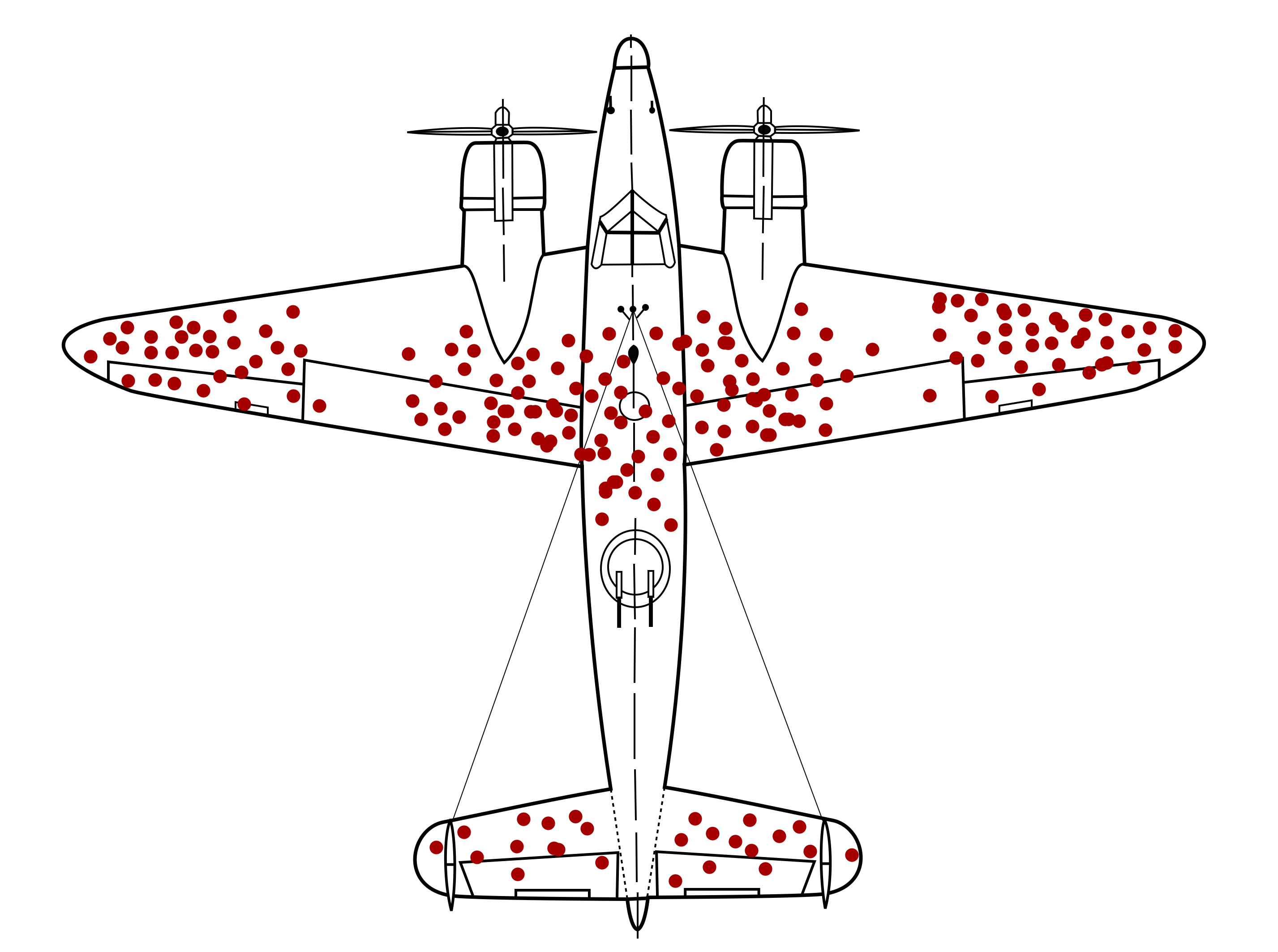 The picture above is probably one of the most famous from the WW2. It depicts the holes made by bullets in US aircrafts which returned from fight missions. It was used to decided which parts of the aircrafts needs to be reinforced. The US military initially decided to armor the areas with most bullet points. They looked to be the most vulnerable, after all.

But then a guy named Abraham Wald, part of a Statistical Research Group at Columbia University, suggested to armor the parts with no bullet holes at all.

It may sound counter-intuitive at first sight, and it is one of the best examples of survivorship bias.

But it makes a lot of sense once you give it some proper thinking: the bullet holes were all in the planes that survived, those that actually made it back. Which means those areas, as damaged as they were, were the ones capable of sustaining hits without the plane crashing. Which makes then obvious the conclusion that the planes which didn’t came back were hit in the other places. So, to increase the number of planes returning, you have to armor the areas with no holes, because those areas were the most fragile.

Survivorship bias tilts our thinking towards all the processes or actions that survived more, even though there is a lot of meaning in all those that didn’t make it. We tend to give more importance, to appreciate more our successes, just because they confirmed our intentions, and discard failures, because they didn’t.

The most frequent consequence of survivorship bias is that we tend to repeat, or to enhance what proved to work already, what generated results. We are trying to armor the parts that survived already, ignoring the ones that didn’t make it.

By doing that, we increase our chances to repeat similar successes. But we will never expand, extend or grow. And by staying in the same area, we will become fragile.

Whereas if we focus on the parts that didn’t make it, on the processes that failed, and try to improve those, we actually increase our odds to cover more ground.

There’s no fun in failure, don’t get me wrong. Failing in business, or in personal relationships, sucks big time. I’ve been there more than once. I’m not a big fan of all those “failure festivals” in which people are sharing their failures, like it would be something to be proud of. Not at all. If you fucked up, you fucked up, don’t try twisting it into some sort of weird success.

But even if you fucked up, even if you lost some planes, try looking deeper and deeper at what made them crash. It’s a painful process, because we associate failure with loss. Loss of money, loss of reputation, or of self-esteem. But it’s necessary to try understanding what were the fragile parts, were you overextended, or where you hesitated too much. Then you can work on those areas by practicing the processes on a smaller, less riskier scale, until you get comfortable, and you can safely start flying again.

Own your crashed planes, your failed businesses and relationships, not by endlessly reinforcing what already proved to be working, but by never repeating whatever it was that generated the crash.

I knew that the picture was about when I saw it. Avoiding failure can be more important than trying to find success. If you lose income or otherwise suffer it can make a bigger difference than if you earn a little more and take time to recover. Stability is under-rated :)

Absolutely, I totally agree, you said it very well indeed! Stability is so much more important these days as well!

This just gave a nice u-turn to my thought processes. Thanks for the brilliant observation!

This is deep, we should stop celebrating and dwelling on our success for too long and move to the next, there's always more target to hit and tick.

Indeed, yet another great, eye-opening, wider perspective on going forward in thoroughly productive manner! I agree too! :)

Brilliant article, once again! There is always meaning in any failure, all the more in the ones which aren't necessarily ours or the failures that have been thrust upon us by bad luck and external negative circumstances or social circles with a lot of ill faith!

There will always be some sort of "bad luck" or "external negative circumstances" or "social circles with a lot of ill faith" in our lives, just like there were bullets during the WW2 war.

Probably the best way forward is to understand what areas are vulnerable to those "negative circumstances", work on them step by step, and learn how to live in such a way that the they won't "crash our plane" next time we bump into each other.

It's a slow, life long process.

Yes, indeed, but there is also something called 'destiny' or 'fate' or 'karma' or 'higher powers' or 'God' which sometimes gives us failures for a lot of reasons, some of which are hidden positive ones, regardless of how we initially perceive them or how we deal with them afterwards. Those failures can be hidden blessings and being vulnerable is sometimes normal (I wouldn't call it 'ok', just normal), as we're just limited humans with limited capacity in many things at the end of the day. But perhaps this is a very comprehensive subject for a totally brand new spiritual post, transcending religion as well, why not? :)

P.S.: It's very important to armor and build up defenses in weak points after a tough battle any given time after the end of it, especially if you really want to win or just not lose next time. As they say, it's better to be safe than sorry and you definitely have to be better prepared in a similar challenge for a second possible round, whenever that will come! And yes, it's a slow life long process or actually an eternal process spanning countless lives, if we are to put things in a very spiritual manner. :)

Fantastic advice. Something a lot of us forget and need to be reminded of.

Thanks for the reminder.

We can learn from our failures to get successful and also put an attention where we never look back. Every story in our life is a good lesson for ahead upcoming days.

You have a very good point here, make me think. 😎
!BEER
!PIZZA

@dragosroua! I sent you a slice of $PIZZA on behalf of @seckorama.

Did you know PIZZA has a very active community Discord? (2/10)