The Big Reset Is, In Fact, The Big Gap 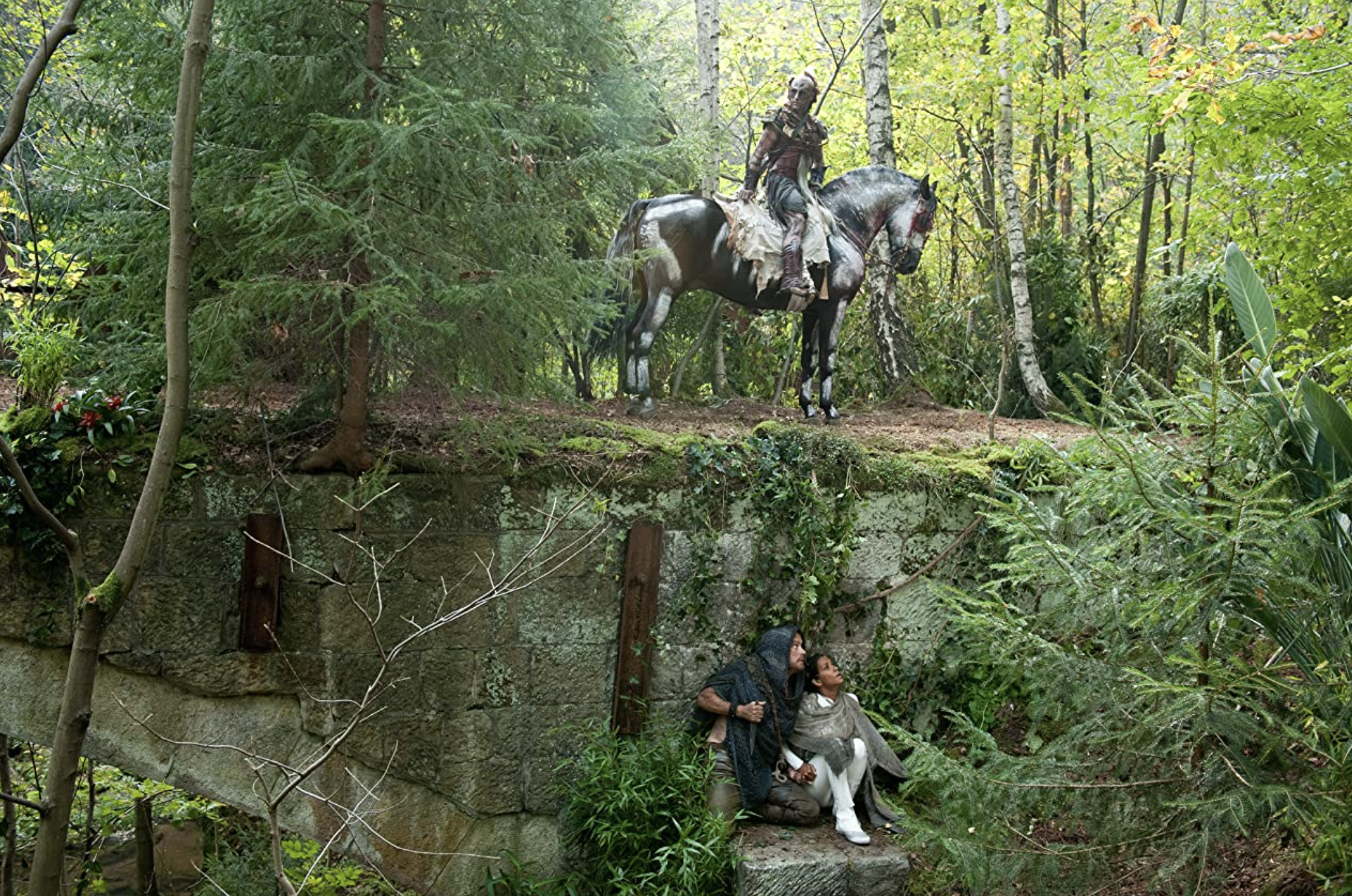 One of my top 5 movies ever is Cloud Atlas. If you didn't hear about it, or, worse, if you did hear about it, but didn't watch it, please correct that mistake ASAP. Thank me later.

For now, let's assume you didn't see it. Here's the TLDR: based on a novel with the same name, Cloud Atlas, starring Tom Hanks and Hale Berry among others, is a Sci-Fi in 6 parts. The whole thing is 3 hours long, and in each of the 6th parts you recognize characters as the timeline advances and, allegedly, the characters reincarnate in different eras. Worth mentioning that the script was written by the Wachovski sisters (Lana and Lilly) which you may know since they were brothers (before changing their sex, that is) as the Matrix creators.

The 6th, and the last, part is the most unrecognizable and surprising. By that time, humanity evolved in two main directions. On one side, there was what you may call an involution, with people living in agricultural communities, threatened constantly by wars and cannibalism. And on the other, a very evolved, peaceful and advanced civilization, both coexisting on the same planet.

The differences between these two branches are striking. And that's also the things that fascinates me the most.

I think we are on the verge of a similar process.

On one side, we see how AI, via social media, succeeded in creating a huge global community of frightened people. This community is desperately asking for protection (against an invisible enemy, but they don't know that) and they are vastly polarized against the other part. Although they live in traditionally "civilized" countries, like Australia, Canada or France, they are merely consumers, prisoners of comfort. They are under constant pressure from media to maintain their fearful state and reject any attempt to challenge the status quo. In this process, they are ready to give up all their freedoms.

This community reminds me a lot of the agricultural, superstitious and cannibalistic part in Cloud Atlas. It's true, right now they are still advanced, in general terms, but it's just a question of decades until this polarization will eventually lead to a technological involution as well.

And on the other side, you find people who didn't have their brains washed just yet. People who are still able to question everything around, to admit when they're making mistakes, to learn, to adapt, to move forward. They're also into space travel and all sorts of innovations that are considered, most of the time, blasphemy by the first lot. A very big part of this community overlaps with the crypto community, if only for the constant ability to challenge the authority status quo.

This group reminds me of the second one from Cloud Atlas. The one that was still able to use advanced technology and live a balanced life.

We're still very early in the widening process. But it has started.

What we have seen in the conspiracy theories streams, related to "the big reset" is in fact a big gap. One that is constantly growing, fueled by manipulation, greed and fear.

And that leaves us only one question: which side are you?

Afraid, crying for protection against an invisible enemy, or aware, ready to learn and adjust?

It may seem you have plenty of time to answer this question. After all, humanity is pretty leveled right now, there aren't differences as big as the ones depicted in the movie. But the last two years showed us how quickly the world can turn upside down.

So try to find the answer faster, we're kinda running out of time.

And, if you can, try doing something to stop the process. It doesn't end well.

Cloud Atlas is a very good film indeed! Wonderful to watch and a lot of absolutely fantastic lessons to derive from it. Needless to say, reincarnation is fact for some. As for that last question, the answer is very easy for me: I am on the side of good. But, more applied in our global status quo case, I am on the side of those who work for a better tomorrow! All the best, take care, stay safe, and have a great evening! :)

That's probably a book I would read, if I could ever get to my too-long reading list never mind through it x_x

Sadly, just a few are able to question narratives.

I've not read the book or seen the movie. The world can be polarised, but it's not purely black and white. Some people won't question how things are, but I think a lot do have their own minds. Just see the massive protests that happen all over the world for various causes.

We do need a better balance of wealth and resources in the world. There's little benefit to someone having $100b when others live on $5/month. I just consider myself lucky to be born somewhere that I could have enough of everything I really need.

We need to keen an eye on the leaders, both political and commercial.

When you have some free time, try watching the movie. It is a very interesting experience, just trying to recognize the characters and observe their evolution, as they reincarnate in various eras.

There's little benefit to someone having $100b when others live on $5/month.

In and by itself, this statement is misleading, at least. There are many causes and conditions that led to those having $100b and to those living with $5/month. With that being said, an overall attitude of compassion and understanding can go a long way. Sadly, we're not seeing that yet, especially in places where you would normally expect it.

We are seeing a lot of rich people hoarding wealth, often where it cannot be taxed. Some of them do a lot of charity work though. Maybe Bill Gates really does want to do good with his billions, but he is treated with suspicion by some. Nobody's perfect. Anyway, the difference in income between CEOs and their workers has massively increased in recent decades. Those who decide where the money goes may have gotten greedier.

A lot of the poorer ones don't have much power to change their situation, so it's not their own fault. I am not fully convinced by 'trickle down' economics.

I don't understand the concept of "hoarding wealth", but I'll do some research. As for "rich people" being the enemy, I openly disagree. It's a very dangerous generalization.

My standard answer for anyone praising the benefits of egalitarianism and communism is to practice it first with their own life, in the best place to practice this, which is North Korea at the moment. Live there for a month, and then come back with the insights. I've lived for 19 years in a communist country and I know what I'm talking about.

We're not living in a perfect system, but any attempt at controlling wealth is doomed. Working with the human, not with his wealth, trying to foster genuine compassion (which is not forced redistribution of wealth) may yield better results, IMHO.

Aren't some rich people buying up property, gold, art and probably crypto too. I'm not saying the rich are 'the enemy', but they tend to be the ones with the power to make a difference. If they can invest in schemes that allow people to improve their lot rather than buying yet another Ferrari then I think it's a benefit. Whether they want a return on that investment is up to them.

It doesn't necessarily need control to improve things. Some wealthy people have pledged to give away money because it seems a good thing to do. The rich can be compassionate :)

I'm not saying communism is the answer. The ideal version might have some benefits, but it's been corrupted everywhere it was tried from what I can see. People are imperfect and some will always be selfish. Of course I'm not going to live in North Korea. Your experiences having transitioned from communism will be different and so may our thoughts on these matters.

I might be considered rich by some. I own a house (actually more than one due to inheritance), have a couple of (old) cars and can afford to treat myself, but I don't aspire to a 'Lambo' or a Rolex or even 'designer' clothes. I don't need those to be happy, but our society preaches that consumption is good. I do give to charities and I also pay a higher rate of tax than many. I don't mind paying tax if it is well used and it may not be currently.

I am no expert on economics, but I see a lot of shitty things going on in the world driven by greed rather than need.

To some extent, yes, they experience less friction. But everybody has the power to make a difference.

Consumerism is a dead end, on that we agree. But it's not necessarily started by rich people. On the contrary, poor people tend to embrace the wrong values in their pursuit to become rich.

All I'm saying is that focusing on external attributes, like the perceived wealth of somebody, for instance, is not going to produce results. Focusing on humans, on their education, on their clarity, on compassion, I believe this will create a better place for all.

You are confusing rhetoric with practice. Best Korea is not Communist, and no country on Earth is, or will ever be, until there is no collectivisation. N. Korea and all purported Communisms are Oligarchies by deception.

Government and all corporations are vectors for corruption. In order for the fraud to be maintained, something more than lip service must be produced, but that is not a reason to praise collectivisation.

Goodwill is the only capital I have any confidence in.

Hey @dragosroua, here is a little bit of BEER from @steevc for you. Enjoy it!

An interesting but flawed film. I made mini-review on my regular blog.