Micro-Charges: The Future is Paying for Bandwidth. 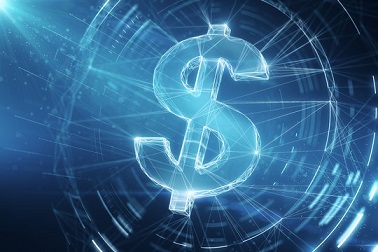 If you want a lot of users you have to give away the product for free and then monetize it in another way. More often than not this "other way" is simply ads and other methods of datamining huge swaths of information for a profit. Every year corporations get more and more information on everyone, and they use that data to mine value in any way they can. This has led to some serious data-breaches over the years due to all the information being stored in centralized locations, leaving them vulnerable to attack.

The Rules of Web 3.0 are quite unclear:

We keep trying to project what we know about the legacy economy onto the crypto economy. Sometimes it works, but most of the time it doesn't. We have to completely change our thought patterns if we want to make it here. In this case we have to pay for things that we would otherwise get for free. Not to worry, paying for resources has never been this fun.

How could paying for something that we'd otherwise expect to get for free be fun? Sounds like a ripoff! And it would be if we didn't get a return, but we do. Even though we have to pay for things like bandwidth and other low-level resources we can then convert those raw resources into a product with exponentially more value (usually NFT adjacent). In this context even a blog post is an NFT.

For example, take this blog post that I'm writing now in real time. When I finish the post I have to pay to have it recorded on the blockchain. You might be thinking, "But Resource Credits are free..." and that would be 100% false. There is simply so little competition to use Hive at the moment that they are heavily abundant and we round the value down to zero in our minds. These days won't last forever. 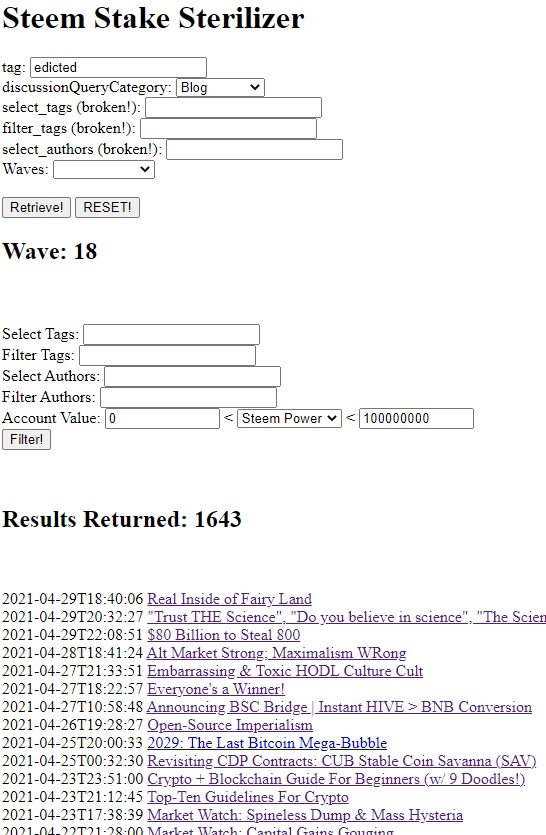 If anyone wonders how I'm able to link back to posts that I wrote years ago: this is it. This is a script I wrote years ago and it magically still works. The idea was the build a new frontend that could sort data based on more information than just upvote value. Yeah, I never got around to doing that. Maybe one day.

So what do I do when I lose it all?

Simple! I just connect to @anyx's full-node witness and run the script all over again. Considering I'm up to 1643 posts plus my reblogs, this is becoming expensive: in both time it takes to run the script and also bandwidth considerations.

Of course it doesn't cost me anything, because I live in Web 2.0 world where my ISP gives me pretty much unlimited bandwidth. It's @anyx that has to pay the price for my laziness and inefficiency. I've probably run this script over 100 times, and every time I do @anyx isn't sending me just the titles and links of the post (what the script shows)... he gives me all the information of the entire Discussion. I'm taking every word... you know what I actually forgot how much there is in a discussion: check it out. 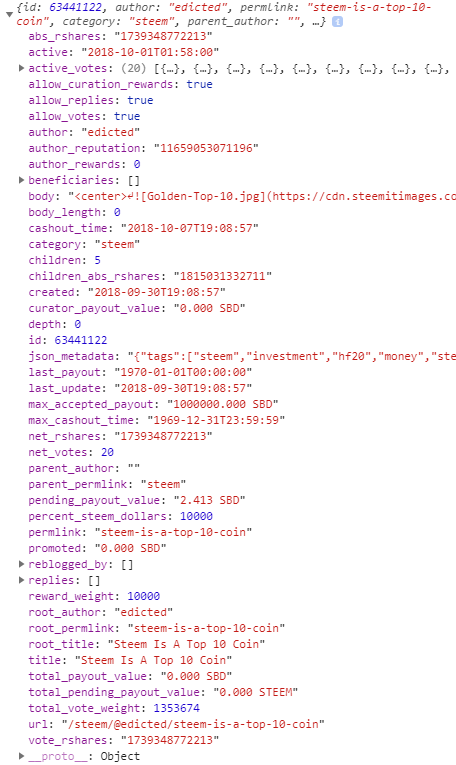 Wow... look at how much information that is... not only does a Discussion contain the entire body of the post, it also seems to include every single account that voted on the post as well, in addition to dozens of other variables.

The point is @anyx is paying the bill here, and he shouldn't have to. First of all, I should have done more work on my database and been storing this information myself rather than constantly pinging his server. That's on me.

The way I see it servers like @anyx will have proper logins and passwords. So imagine I can connect to his full-node with @edicted's credentials (signed transaction with the posting key). This would then allow @anyx to monitor how much bandwidth I use and how much everyone else uses, and if anyone starts using too much they get cut off or they have to pay money for "points". Of course these points would be a centralized cryptocurrency only available on the @anyx server. Also most accounts would be allowed to run into the negative. We only have to charge users who consume a lot.

So anytime anyone gave @anyx money his full node would automatically credit them points on his own centralized system. Using bandwidth on his full node would very slowly drain points over time. This is a micro-charging money stream, which I believe will be the future of all of this going forward. We won't be allowed to get these things for free once we begin to scale up.

It works because it's not exploitative.

In Web2 corporations give us the service for free but then they own us and everything we do. In Web3 we don't get anything for free but we can leverage the cost of doing business into much bigger profits. I'm writing this post and it's going to cost me RCs. I'm going to turn those RCs into exponentially greater value than their cost. That's how things are going to work moving forward. We'll have to pay our own way but the journey actually has more value than the cost of the ticket.

This is essentially what I'm doing with https://personal.community (shameless shill) the next up on my to-do list is local storage caching for the data I pull, and eventually add a if cache older then x hours, fetch again.

I imagine they could write something that uses rc for retrieving data along with that login type verification, encouraging people to run their own hivemind nodes, which I hear is getting low on ram reqs,but not there yet.

Or even lite nodes, a type of "I'm only fetching data for these people that I follow" building essentially mini side chains or what have you.

I can't imagine being charged for bandwidth. The competition is too strong and there are blockchain solutions without transaction fees. Any inflationary coin, can reward node-holders without directly charging individual people.
Nobody would mind a low fee for transactions specifically but bandwidth will probably drive people away.

I was hoping someone would say this.

You are already paying for bandwidth.
Every Bitcoin/Ethereum fee is a bandwidth fee.
Even on Hive every transaction has a fee.
There is no such thing as a feeless crypto.

It will become much more obvious that this is the future when we start scaling it and the only way to do that is the charge users for the resources they consume.

I'm arguing far out of my depth here. I'm about a month into crypto.

But I feel like bandwidth and transactionfees are different.

For example SoRare and Gods Unchained are games based on NFTs saved on the ETH Network. (GU is on IMX now, though)
I would interpret paying for bandwidth as paying for every game you play and everytime you look at your card.

How about Coins like Nano? Do you think they will eventually have to pay a fee?

Hive needs some major architecture improvements. Hive block producers should have nothing to do with API nodes or hivemind. Hivemind should have its own set of witnesses and rewards, preferably with an SMT.

Hive should then be just for paying DAO proposals and witnesses who produce hiveblocks, not who run API nodes for hivemind.

Anyone can run a full-node.

The cost of doing so can add up if you're not making money off of it.

I see it easy. Dapps will make revenue, for example, games. A part of it can be used to buy hive or rent RCs.

Same for social. Advertisements are an untouched income source for Hive front ends. Or better it's in the alpha version.

Leo shows how revenue shares can work. So I'm sure we see more of a network of owners that can support each other and RCs can be like venture capital for new things to empower them for WEB3. Like, give RC for some Tokens, like miners works on HE.

Long term things will balance in some way. In games and NFTs I see a lot of revenue potential. Next smart contract things with Hive as a native token.

Social things like posting will become cheaper in fact of costs of RCs. But only with Network growth.

We can fairly say, nobody pays 150$ for 15Hive for posting and so on if hive hits 10$. But it doesn't mean the user is not worth the RC to use the platform.

Depending on the models, a balance will happen. And yes everything is in competition with everything. So it is the same as on the Internet. Time and attention are limited.

In general most is on disk space, it should make it possible to scale "unlimited" from posting/transaction things. More difficult would it be if storage would save other data like videos :)

The end of the day will be "benefit exploring" to existing things. Most benefits I see in gaming/ fintech combined with social.

Hive can scale easy factor 100 from now without any problem. Blocksize can increase also by a factor of 20 without any bigger problem.

RC costs are in general fantasy costs to prevent spam. To evaluate the long-term Value/spam.

The number can be changed. But everything must/should be cost-efficient.

Hive has no future if that's how you see it's future. Hardly anyone is using it now and you think charging people for basic usage is the future. LOL

There is no such thing as a free lunch...

A good way to put things in perspective. I had never given a lot of thought to this but it makes perfect sense.

We pay for things but we own them. We created the product instead of being the product.

Now, if we could just do that for ISP usage instead of having to go through the local service provider for a connection...

This is a great viewpoint and break down of the value of the networks we are creating overall. This doesn't apply to just Hive, this is basically applying to every aspect of the economy in different ways. Everything takes energy in one form or another and that is all currency is, energy, and it is definitely NOT free!

I liked this write up that I am reblogging it, which means it will show on the front page of https://coin-logic.com for our audience there to take a look at and will be featuring it in our next update video!

Well said! I'm in favor for 3.0 because we are still in the infancy, many trail and error will have to be conducted for a polished product to take shape.