The Bittrex mobile App helps me to keep an eye on what is hot and not at any given moment in time. The Markets section of this app list not only the last 5 viewed token pairs, but also provides a list of the top 10 winners and losers. The winners list is shown by default and with a simple finger tab, the list of losers is shown.

Yesterday it showed SBD (Steem Backed Dollar) right at the top with a massive gain of over 200%. I still had a few of these tokens, and decided to set some sell orders. Just yet, before writing this post, my Bittrex laptop App told me my sell order got hit (thanks to the Bittrex notifications).

Still owning a few more of these tokens, now it's time to decide what next sell order to set.

Reviewing the history of SBD, we can see easily enough it got to all time high in the last bull run of BTC and Alts back in end of 2017. More than 14 US Dollar at its peak (see last chart in this post). At the time of writing, SBD is something like 5 only.

Could SBD raise to new all time highes in terms of US dollar value? Who knows! Hopefully :)

Analysing further the situation around SBD, it becomes clear the South Koreans are the source of this breakout; Like back in 2017. Bittrex is just following what happens on Upbit, at least thats what I can make out of what I was seeing on the screens about 18 hours ago and what I was seeing just an hour ago.

Checking the SBD/KRW charts, SBD value will need to increase another 5 times to reach its new all time high in terms of the local South Korean currency. That'll be something like 25 US dollars, instead of the 14 US Dollars. If that will happen, I should not have sold any SBD :) But who knows?! Crypto is pretty unpredictable :) Maybe the Koreans will drop out of SBD soon and the value will retrace to what it is most of the time, around 1 US Dollar.

Along with the breakout of SBD, Steem is finding its way up; Much less so than SBD. Likely because the liquidity of Steem is also much larger than SBD. HIVE is going up as well, but much less so compared to Steem.

This SBD breakout tells me, Steem is far from dead. Regardless what the HIVE people trying to tell us, Steem being centralised and all, it doesn't seem to matter for (short term) traders. This is proof to me, the whole debate about how decentralised a blockchain should be to gain value in the market, is less important than many in crypto space let us believe. Sure, I do understand decentralisation is key to be able to trust a blockchain for all sort of crucial services we like to use. However, it doesn't seem to play an important role in crypto bull seasons. As a matter of fact, Steem is doing better than HIVE, and Steem Backed Dollar is doing much better than HIVE Backed Dollar. Interestingly, Steemit Inc showed their faces in South Korea, from time to time. Visiting conferences and all. Something we may need to do as well to promote HIVE?

At time of publication, SBD increased another 10% on Upbit and Bittrex; Currently in pullback mode. Ready for another run? Where will it find its high?

a LEO / HIVE original
all images by edje unless stated otherwise

I still have 11K STEEM.. whomever said STEEM was dead is a liar lol

We need to convince the south koreans to embrace Hive.

Other blockchains are planning the same :)

Other blockchains are planning the same :)

You mean promoting in South Korea?

Another community is hoping to convince the South Korean crypto community to invest.

Which other blockchain is this? BLURT?

Yes, I saw some wishful thinking on Discord.

Just a minute ago, I discovered the Steem wallet offers a TRON account. This maybe the reason for the bull run on SBD and Steem. They made it quite simple. Just click yes to get a TRON account and a PDF is downloaded with public and private key. A refresh of the Steem wallet webbrowser pages shows a TRON wallet is added. Still completely empty, so I suppose no airdrop. Being super inactive at in Steemit, I'll need to do submit some posts or place some comments and cast some votes to learn what this TRON account is for. A task for coming weekend. Or whatever, not so interested in the Steem community. More interested in getting as much value as possible out of my remaining SBD and Steem tokens :)

UPDATE:
SBD hitting a (short term) resist level. Wil it hold? Will it breakout the low? Another bull run will be created? Interesting hours/day ahead of us :) 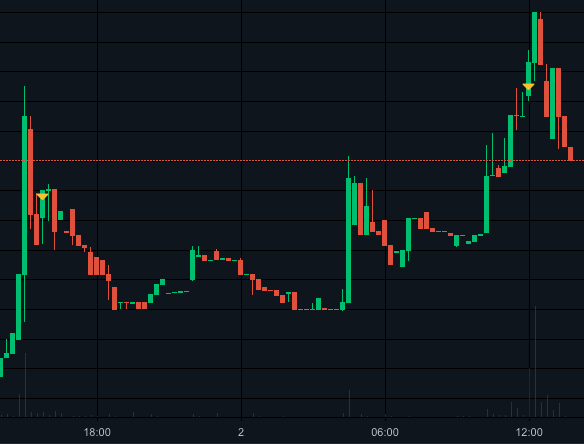 Yea, and the South Korean locality is not limited to Steem/SBD only :)