List of LeoFinance Branded Questions we Need Asked on Quello

I've now spent the last few weeks spending a few minutes each day to answer whatever random questions are posted under the LeoFinance topic on Quello and the initial results with zero strategy around questions/answers are encouraging.

Take the following question on Quello as an example: What is the total supply of LEO tokens?

After answering the question, my answer was elevated to the position zero box when asking the same question on Google: 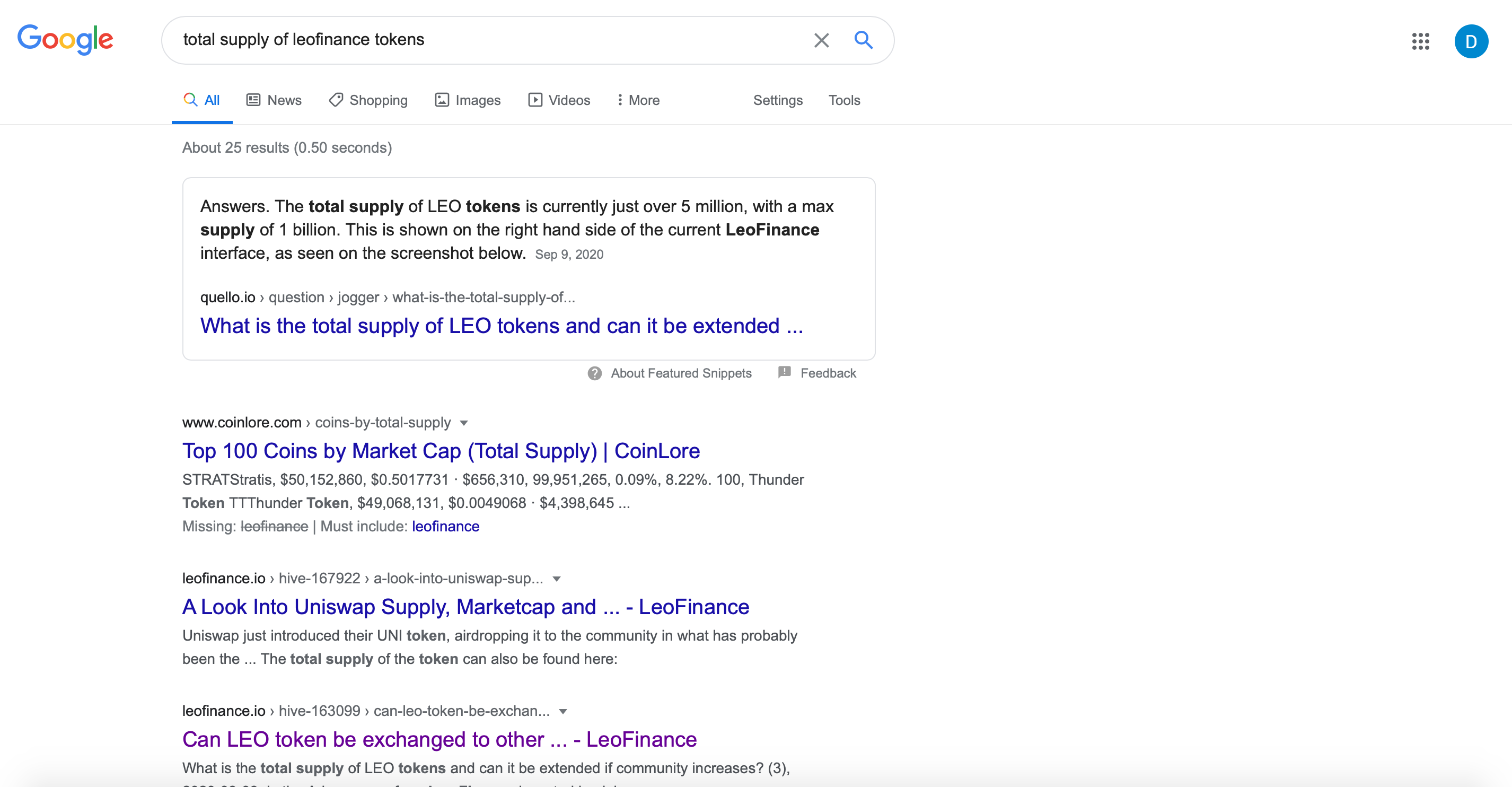 While this particular question isn't going to draw a ton of search traffic, it shows the potential of using Quello not only for getting links, but also for providing helpful, outward facing content about our community.

So it's time to add a bit of structure to what we're trying to achieve here.

While I've tried to offer 100% LEO upvotes for LeoFinance tagged questions on Quello, nobody has bothered to take the 2 minutes to ask a single question from the quello.io interface.

Except of course for @jogger and @whatageek who have been smashing them out since before I came along. You guys are saints.

As a result, I'm going to write a list of relevant outward facing questions about LeoFinance, that have a chance of ranking on Google.

All I want you to do is copy and paste them into the quello.io interface and I'll give you a 100% LEO upvote. Easy fucking money guys, come on.

Of course add whatever other LeoFinance related questions you want, just take the time to write well structured, helpful questions following some sort of format like that.

I think we should say "LeoFinance LEO token" whenever we're talking about it because Google picks up some other junk token when you just say LEO.

You ask the questions, I'll keep providing detailed answers from the quello.io interface that include a backlink.

After every questions is answered on Quello, we can then copy and paste content into the FAQ or do whatever we want with it on LeoPedia.

Now I know a lot of this stuff is done in the LeoFinance FAQ, but it's all in one big messy blob and all still branded as SteemLeo.

But for now, let's just get the content out there and create some backlinks to our domains in the process.

After we've done this, the real fun can begin - Answering unbranded questions with answers that link back to LeoFinance!

Help me out here guys, come on.

Best of probabilities to you,

Help me out here guys, come on.

I've asked 4 questions - as barge and krunkypuram (avoiding clutter) from your list :).

I've hit them with votes, but now I've gotta find the time to write proper answers ;)

Just came across a post which has an answer at least two of the questions - a 'time-saving' starting point?
https://beta.leofinance.io/hive-167922/@whatageek/leo-coin-gives-a-35-70-apr-and-that-is-a-stable-rate-plus-the-market-cap-is-still-low

Wait until we start hitting the unbranded questions on both Quello and Quora 🔥.

Good point with some benefits that LEO Financing is needing, even if those are not at the surface.
First improve the backlinks and increase SEO score, rate better on Google and make it easy to find answers and improve LEO FAQ.

The links are handy for SEO sure, but most important this is outwardly facing content that needs to help new users.