forexbrokr (71)in LeoFinance • 2 months ago (edited) 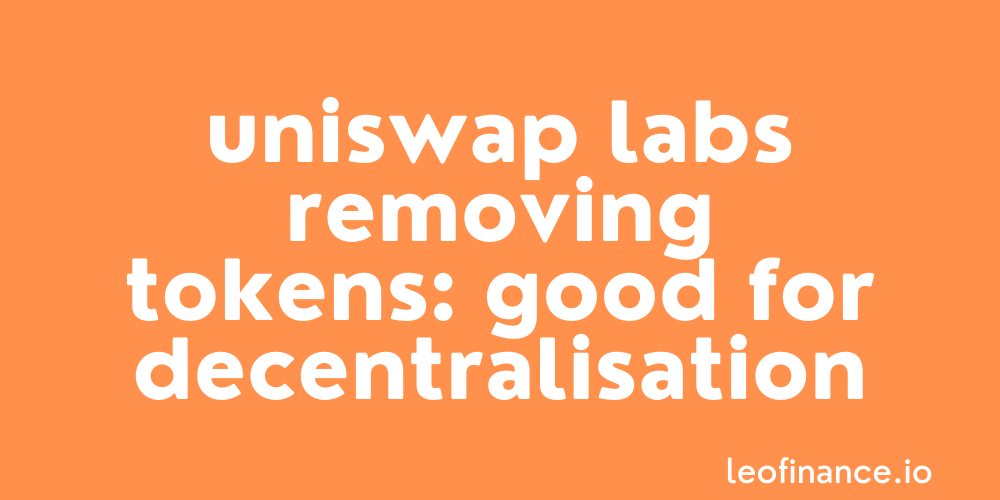 A look at Uniswap’s decision to remove tokens from its front-end and why this is ultimately good for decentralisation.

In case you missed it, Uniswap Labs has decided to remove a selection of tokens from its app.uniswap.org interface.

Today, consistent with actions taken by other DeFi interfaces, we have taken the decision to restrict access to certain tokens through app.uniswap.org.

On the surface, this looks like excellent progress for the DeFi industry and shows a strength of Ethereum that dApps built on the network can achieve this level of decentralisation.

But after taking a look at the discussion on Twitter, I was shocked at the amount of pushback this decision was receiving.

Why Uniswap Labs removed the tokens

As the largest decentralised exchange (DEX) in terms of trade volume, there was always going to be a reaction of some sort.

But as I said above, I really didn’t expect the pushback we’ve seen.

Uniswap Labs ultimately made the decision because as a US regulated company and hosted website, they didn’t want to fall foul of their regulator for offering securities trading.

However, the Uniswap Labs company is not the Uniswap Protocol allowing decentralised trading.

Uniswap users can still swap all of the tokens that Uniswap Labs has removed from their interface, directly or by using another front-end.

The company behind the platform, Uniswap Labs, simply removed those tokens from their own interface.

Uniswap Labs the company, vs Uniswap the protocol

Let’s take a look at the key differences between the two.

So while the US regulator may be able to touch the US privately owned and run front-end, they can’t touch the Uniswap protocol back-end.

Users are therefore able to make a decision on which front-end they choose to use between a US regulated one or an offshore one.

The US regulated front-end may be safer, but it will be extremely limited.

An offshore front-end may allow you to trade whatever you want, but it could be shady.

The point is that as a DEX, you’re able to make that choice yourself.

A comparison with Hive and LeoFinance

As I’m publishing this blog on LeoFinance, let’s take a look at a comparison to our own decentralisation capabilities here on Hive.

The LeoFinance App: Is the privately-owned domain that acts as a social media front-end for our community.

So while LeoFinance may be able to censor you on this front-end, your data remains tied to your immutable account on the Hive blockchain.

You’re still able to choose to display that data via another Hive front-end, that doesn’t follow the same community rules.

This is the power of Web3.

Final thoughts on the Uniswap decision

What Uniswap’s decision should do, is make you reconsider the role of national financial regulators, within a globally decentralised future framework.

The future is now and we can see that this decision actually doesn’t protect US traders at all, but instead forces them onto more questionable, offshore interfaces or exchanges.

Regulators need to start considering that people can and will continue to use DEXs and they should be helping to facilitate access to the best and educating on the worst.

Not just regulating the good players away.

Give your people some credit.

Why not leave a comment and share your thoughts on Uniswap Labs removing tokens within the comments section below? All comments that add something to the discussion will be upvoted.

This Uniswap Labs blog is exclusive to leofinance.io.

it good to keep the cleanup of some unwanted crypto

But don't you have an issue with someone else telling you which coins are wanted and unwanted?

There is no such thing as wanted or unwanted crypto because it's all opinion-based.

I personally find it disappointing that Uniswap Labs have been forced to censor their popular US-based front-end, because an out of touch regulator tells us which coins are unwanted.

They regulate to protect their citizens... or so they say.

But the fact that anyone can still trade all coins via different Uniswap Protocol front-ends, means that their outdated regulations don't actually protect.

In fact, you could argue that it does the opposite by encouraging them to trade via less reputable, offshore front-ends.

In my opinion they should open it up, regulate via education and let their citizens decide what they want.

These are things that need to be clarified, because it starts an unstoppable witch hunt, I liked the example of the comparison of Hive and Leofinance.

The Hive/LeoFinance example is one that needs to be made clear.

Our Hive data is only censorship-resistant at the account level.

In order to participate in communities and have your data displayed, you still have to play by the rules of privately owned, law-abiding front-ends.

But the great thing about Hive is that if you don't like those rules, then you can simply use another front-end where they don't exist.

The data is always tied to your account, the communities just display it.

Its the problem with being a corporation in the US. They obviously don't want to get hit by federal lawsuits and all the nonsense but its contrary to what people would want. This is why I think less government involvement is better.

Yeah, the US regulator is trying to protect their citizens by limited them from trading crypto-assets that could be considered securities.

I just find it frustrating that they make that call instead of educating their citizens and allowing them to make the call on what they consider unsafe.

While in the past world of centralised exchanges, the removal of assets meant that there was no longer a way to trade them, this is no longer the case in the modern decentralised world.

Any US citizen with an ounce of technical knowledge can just use a different, offshore-based front-end to trade what and when they want.

So with that in mind, it is now over to the regulators to change tact in order to become relevant and actually do right by their citizens.

That is their job after all.

As I said above, they need to move from a model of outright banning and censorship, to facilitation and education.

Right on, I made a similar agreement recently that this would ultimately lead to more decentralized front ends.

That said I'm not sure financial regulators are down with a decentralised future..

They're not, but there's literally nothing they can do.

Any US citizen with an ounce of technical knowledge can just use a different, offshore-based front-end to trade what and when they want.

I mean just look at how many US citizens here on LeoFinance use the supposedly banned Binance Cex via a VPN.

In order to become relevant again, they need to move from a model of outright banning and censorship, to facilitation and education.

That's how you truly protect your citizens in the modern online world.

But regulators are aware of this too, everything is by design and with intention. They are choosing the current path that they are on, and we must come to terms with that and prepare accordingly

The decentralized backends like Uniswap are where the power lies. Front ends can come and go but if we keep building on them, we will still tap into what is out there and out of the reach of the regulators.

Anyone with an ounce of technical knowledge is already out of reach of regulators and government-backed censors.

Having any freemium VPN installed for example, allows you to access government banned or use regulated websites like you were offshore.

Just look at all the yanks using Binance (banned by their regulator) on a VPN or Chinese literally looking at Google (lol) as prime examples.

The cat is already out of the bag when it comes to decentralisation and it's the regulators that need to change the way they operate.

From outright banning and censorship, to facilitating and education.

You can always import the smart contract. Most of the times I've traded on Uniswap it was tokens not in the list.

Yep, that's the cool thing about the Uniswap protocol.

These token removals are purely cosmetic changes to the app.uniswap.org front-end.

The back-end functionality remains for anyone who knows what they're doing.