KOINOS - Why I decided to participate. 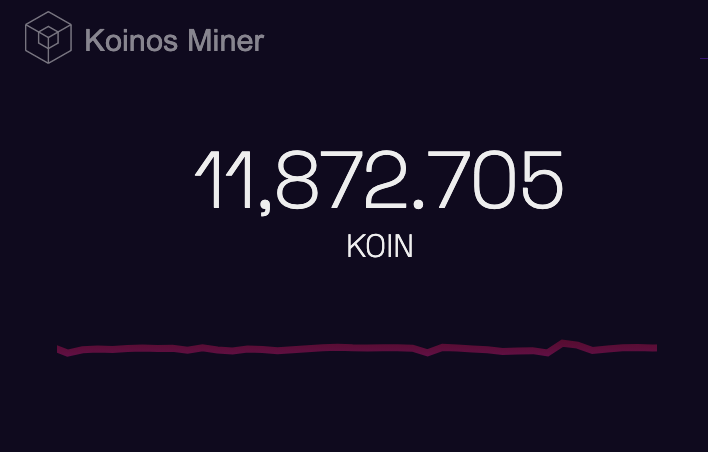 I have heard/read the announcement and various posts for the mining of KOINOS $Koins before it started. I was reluctant to join, because I still couldn't make sense of why ex-Steemit devs chose to abandon Hive and not finish almost finished work of deploying SMTs. I have great respect for these folks and believe they are brilliant minds, and them leaving Steemit Inc when realizing decentralized vision was being destroyed is admirable and deserves huge amount of respect. The stood with community when it mattered most. So, kudos to them!

SMTs project was almost done as it was demonstrated during SteemFest 2019 and was about to be launched in Spring of 2020. It still bothered me when split happened and we create Hive that ex-Steemit devs didn't plunge into this work to deliver it for the community. Initially, I thought they probably have some non-compete clause in their employment contracts. I don't think that anymore since they are building something new - KOINOS.

Nevertheless, they are part of the Hive community and are not obligated to anybody to do anything. I still hope though Hive community can benefit from their expertise and brilliant minds in building the future of the Web3. Now that HF24 has been a success and things are stabilizing, the next focus for us all should be SMTs or whatever we choose to name it.

Anyway, initially I didn't pay too much of attention to KOINOS and getting involved in mining $KOIN until I saw the initial mining supply of 100 million. That caught my attention. I am used to seeing projects going greedy and minting billions of coins. For example, EOS ICO was an initial supply of billions coins, if I am not wrong. 100 million supply, in my opinion, is not too high for a project like this. That made me look further.

I am fond of decentralization and decentralized systems. Upon looking further into KOINOS, I realized quickly how the team is for decentralization. They could have gone ICO route like EOS and made ton of money as they develop their product. They chose to make it as decentralized as possible with creating a fair playground for everybody to participate. Initial mining coin supply is 100 million $KOINS and mining is done using CPU. This allow any individual with a computer to participate. The KOINOS team themselves will have to mine their coins as well along with other participants.

Moreover, we already know most of the team members for years and their knowledge of blockchain tech and vision for decentralization is unquestionable. I have not read the KOINOS whitepaper yet, but knowing these people makes me think they about the create something amazing. In my opinion, any individual in this team is ten times smarter than Dan Larimer, and million times smarter than Ned Scott of course.

A couple of days ago I started mining $KOINs. They have built a beautiful GUI that is super easy to use. I use Mac. They even thought of creating GUI for Mac as well. Initially I was getting few errors once in a while, but thanks to the the guide by @nickihavey I shared above I was able to set up a stable mining on my desktop and a laptop. They are not too powerful, yet were able to mine about 800 $Koins within 2 and a half days. I have heard/read some were lucky enough to get much more in the first days of mining.

The mining of the initial supply of $KOINs is going to last 180 days. The team have chosen the Ethereum network for the miners to post the proof of work. This causes miners to spend gas/transaction fees every time they are rewarded $KOINs. For me the these fees have been somewhere between just under a $1 and $1.5 Overall mining fees were around 3 cents. I guess this differs for everybody based on how they set their miners and the power of their computer.

I was able to mine about 800 $KOINs within two days and a half and that cost be about 0.07 $Eth. This made me wonder what the prices are for $KOIN in Uniswap and try out Uniswap. I haven't used Uniswap before. This was the time. It seemed to me that cost of mining and buying $KOINs were similar. So, I decided to buy some as well. I just bought 11K $KOINs for 1 Eth. I am planning to buy more. However I have set cap for my investment in this project to be $1000 at this time. I would like to learn more before I can commit more.

Mining has been fun so far. It puts in the perspective how decentralized systems work, where anybody can participate by simply joining the network. My long term price target, even without knowing what the team will deliver, at this time is $1, just because I know these brilliant minds are capable of amazing things.

Lastly, as I mentioned above these folks are Hive family and I think Hive and KOINOS can be beneficial to each other and be a a force in advancing decentralization forward.

What problem does this coin solve that other blockchains can't do?

You bring up a good point. I am guilty of not doing proper research and not even reading the Whitepaper yet. For me it started as an experiment to try out their miner and uniswap then became a purely speculative matter. I don't know the value proposition yet, but I tend to trust the team and think they must have thought through everything. I will go and do some research now. :)

I'm glad you found the guide helpful and cool that you got to set yourself up there using it! Nice one on mining 800 KOIN! I haven't managed to mine anything the last day or two so I think the big guns are coming in with full on mining set ups and it will probably be cheaper to acquire KOIN by buying it. I'm not familiar with Uniswap. Maybe you can make a guide on that so I can follow 😁

I agree with you though, strong development team behind this project - I'll probably use my excess ETH in the miner to pay for the KOINs as I don't want to over cook my PC atm! What hash rate are you getting from your Mac?

I don't know uniswap enough to write about it yet. Still experimenting with it. Now I started providing liquidity, just to see how it works. @edicted might have some guides on uniswap.

I am planning to stop mining as soon as funding runs out too. Especially on my laptop. It does get loud and hot.

Nice one, I'll see if I can go back through his posts and find it, might as well give it a go right?

Ha! Yeah it might a bit more expensive to mine KOIN if your CPU needs replacing! Mine was on the way out but nothing a quick blow on the fan won't sort out (standard solution I have for the moment)! I've already spoken to my IT guy and will probably need to upgrade the beast though, KOIN to $0.50 should cover it 😆

Thanks for getting involved! Just to clarify, SMT work was completed and they were released on testnet. There are many factors involved with executing a hardfork which make them difficult to execute separate and apart from the completion of any particular feature, so I am certainly not pointing the fingers at the Hive devs. They've done a great job at taking over the responsibility of maintaining the chain. Hardforks are hard. But the reason SMTs are not on Hive has nothing to do with the SMT code as far as I know, and if it does no one has mentioned that to us.

Thank you for clarifying. I didn’t know there was a finished code. That is good know. Hopefully, we will get that implemented in the next hf.

Just finished going through Koinos whitepaper. It is really interesting. I will be eagerly waiting for mainnet to lauch and continue accumulating $Koins in the meantime. Thanks.

I'm having fun mining it and think there are some good signs.

It's getting a lot of interest.

They have a nice looking site with good information

The Gui is good looking and the they have created excellent tools to help people.

there are now nearly 8000 active projects, it's hard to compete for attention, but at least they are aware they need to reach out to get attention.

I'm highly interested in the project and if nothing else it is a great learning experience.

Yes, I agree with all of your points, especially the last one.

I use to read @edicted's post about mining on koinos and it fairly seems like i already know much about it. Like you said, these are guys we know and they're great minds, I don't know how far but I think koinois can go far because of how further decentralised it is. I guess steem was a learning front and they'll do better with this project.

Yes they have experience. Let's see what they will do with it.

I will try it.

It is fun. They have a nice GUI for mining.

Yeah, the first few days were pretty impressive when you talk about the amount mined! Let's see where this goes now!

Yeas I wish I could get earlier when first day minding looks like was rewarding. It's still too early, there is 6 months of mining to go.

Yeah, we can never know what is going to happen in these 6 months!

I gave it a go and burned some ETH but it just seems like an over elaborate airdrop and I honestly don’t see the point of it! Mining is meant to secure the network this doesn’t do much but gamifiy distribution

I guess it’s a different model to try but I decided to give up on it, if Koinos does turn into something worthy investing in I’ll buy some

Well it is mining, it is fair distribution system based on who wants to participate and spend money. I like the fair part that founders don't get to ninja-mine. It is still too early to say what will be of Koinos. Just another risky investment. I bought some more since this post and tripled amount for now.