Trading week - Turning a Losing Trade to a Winner. 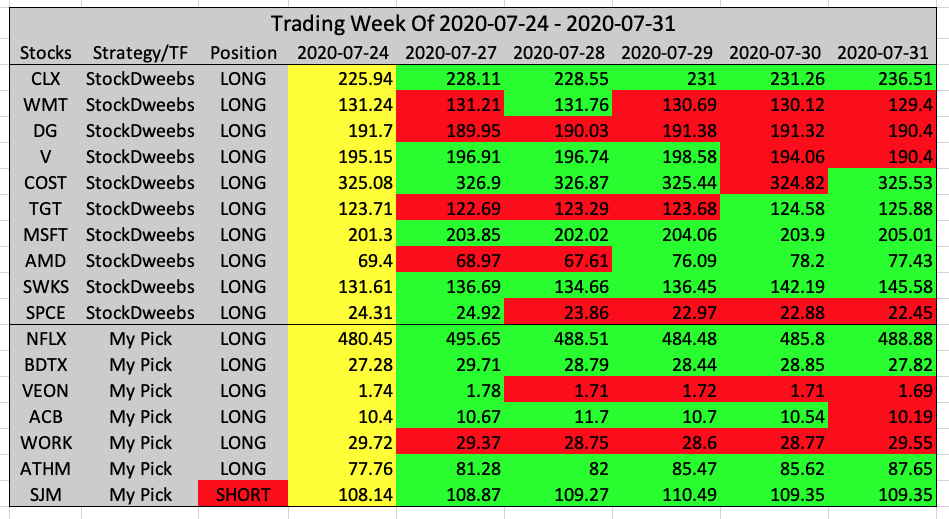 This week I discovered that I have a special talent in executing a losing trade even when there are plenty of winners in front of me. Last week I had 13 stock picks to watch. 12 of them ended up performing as predicted, and one went the opposite direction. The one I chose to actually trade ended up being the loser one. Similar to last week, I repeated the same action this week. For this week I had 6 long positions to watch, decided to trade one - $WORK, Slack Technologies Inc. On Monday, as soon as the markets opened my order was filled and I bought some $WORK stocks. At the end of the day, it became clear that I chose the loser. 5 out of my 6 long position picks moved up in price, and the one I chose to trade didn't.

Learning the lesson from the last week, I wasn't intending to only trade one stock. I did place an order for $NFLX, Netflix as well. But that order never was filled. I only buy stocks with a limit order, and usually place my orders slightly lower than a market price. I like to buy stocks at a slight discount, but also not too low so the order can actually be filled.

The following days $WORK kept dropping. I reviewed the charts again if they would change my bias. That wasn't the case, and I kept buying more and averaging down. If you looked at the screenshot above you will see that $WORK remained red for the rest of the week. However, since I kept buying at lower prices, it brought my average lower and when today $WORK started moving back up a little bit my unrealized losses started turning into unrealized profits.

Also, instead of just relying on watch list that I prepare on weekends to trade, I started to adding more stocks to the watch list that I could trade this week. One of my first stocks I have traded in the past, $DVAX charts showed some long signals. I bought some $DVAX and gained little profits there.

Normally, I don't like leaving open positions over the weekend. But this week I was going to leave $DVAX and $WORK and see what would happen on Monday, since they both still looked good in charts. I decided to close the $DVAX for a small 1% profit. The reason for that is they have earnings report coming up next week. I really do not like trading stocks right before the earnings reports. Some traders actually plan trades around earnings reports. I don't. Too many unexpected variables and risky for me. When I look at charts, I don't look at the fundamentals, I don't look at the news. I just like to see what story charts are telling. This might not be a good trading habit. There is some information out there the crowd acting on, and ignoring them may cost an amateur trader like myself money.

If I wasn't blind to news when making trading decisions, I would have known that $WORK, Slack Technologies filed an antitrust complaint against Microsoft in Europe.

The company claims Microsoft (MSFT) is engaging in "illegal and anti-competitive practice of abusing its market dominance to extinguish competition" by tying in its own communications platform, called Teams, to its popular Microsoft Office suite. Slack (WORK) says in its complaint Microsoft force-installs Teams for millions of people and blocks its removal. source

It seems this news had played some role $WORK's price decline. Charts still look good to me, Slack seems to be a good product with decent size user-base and revenues keep increasing. Moreover, this Covid-19 crisis showed more need for remote work and collaboration tool like Slack, Zoom, and even Microsoft's Teams.

I could have closed the position today with overall 2% profits for the week. For some reason, I did feel safe to leave the position open and see how it will play out next week.

"It never was my thinking that made the big money for me. It always was my sitting." ~ Jesse Livermore

Thats an interesting play by play for the week. I've tried the dollar cost averaging strategy in the past to make up for some losing trades. Its hurts quite a lot though when the stock doesn't bounce back. Buying to the bottom and then flatline. Unfortunately that has happened a few times to me hahaha. I'm with you on not buying around earning reports releases, could go either way afterwards.

I definitely need to do more trading but I think I'm just going to hang on to my funds that I've got going.