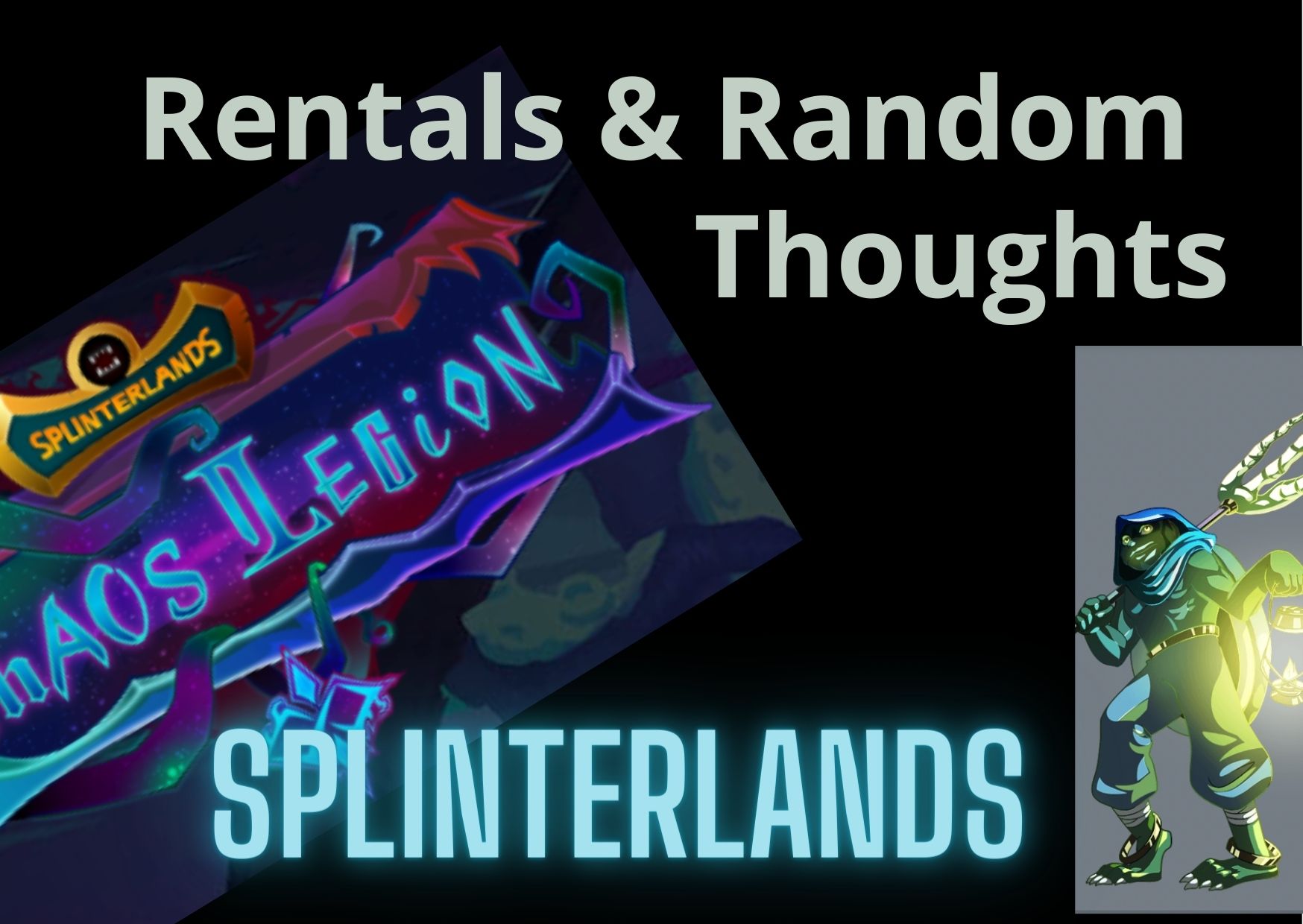 Well, the first season with the new rewards system is behind us. How's you do?

I played the season in Silver but with Bronze chests. I picked up about 24 chests per day on average for the first 10 days and 102 end of season chests. But I didn't play that last 5 days so I didn't do quite as well as I could have.

Why? Honestly, it became too much.

By playing for those 10 days with bronze chests I made about $7. For that $7 I added an hour a day to to play the game and because I have to sort through the cards I'm renting and the cards I'm playing, it adds at least an hour too many rental management time.

Now I live on a beach in Mexico and am basically retired at 42 so that's not a huge deal but this bear market has shifted a few things for me. I know in the hours per day I use extra playing and managing Splinterlands I can probably stack $1000 each week in fiat. This helps me to stack heavily in this bear market.

I have my eyes set on the Hive (hive, HBD, Leo, PGM, LOLZ, PsyberX, Splinterlands, thgaming, etc), Algorand (Algorand, Yieldly, HDL, a few community tokens, and so many NFTs!) ecosystems as well as increasing my bitcoin and this seems like the best opportunity to do that we may ever get again.

Rentals this season brought me in 144k DEC. All of it I stacked back into cards. My most today I picked up some more Untamed Summoners to go with the Bortus' I picked up last week. These will be gold I believe going forward.

I picked up 4 Contessa L'ament and 8 Pyre today but I've been quite busy picking up all sorts of cards I think will rent well going forward. Many of these cards are under $0.20 right now. It's probably not the best time to spend DEC with it under peg but prices on cards hard come down about an equal amount or more so I've just done it.

End of season rentals were interesting. A few people haven't yet gotten the memo that end of season doesn't matter so there was an uptick in rentals. Not as extreme as the ones in the past but high CP cards did head upward which boosted earning a bit. And just like other seasons, today we are seeing a bit of a fall off. I expect this season to be better than last season though. I'm hoping to get to 300k dec in rentals this season.

It's a large jump from 140k but last season the first few days were completely dead and I played a lot of my good cards for the first 10 days. I think this season will also pick up in growth where the last one left off. We may even see some CP cards start to come back since daily active users are starting to uptick again and bots are slowly learning how to rent again. A few days last season were actually really strong rental days and then they'd fall off again.

Looks like Daily active users is picking back up on about a 5 day uptrend. 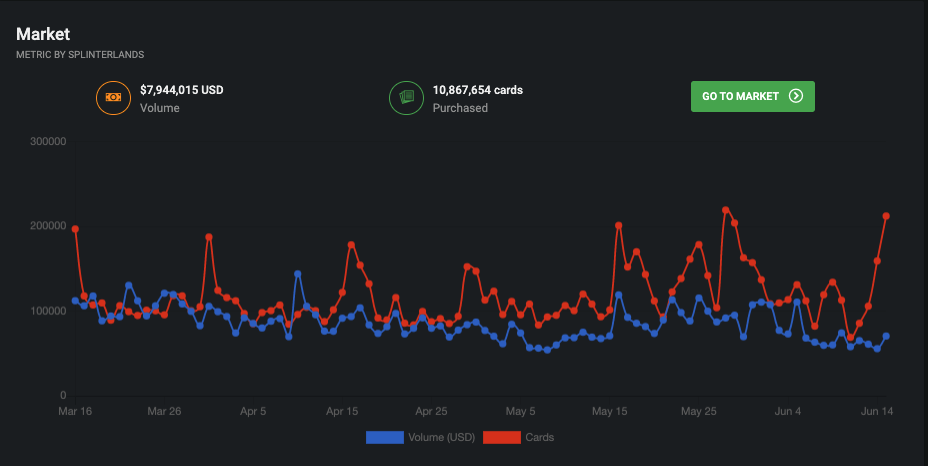 With so many rewards cards at just a penny or two, its this is good to see. People are buying them. Of course the day after season end, there is always a ramp in card buys but this one is several days in the making. 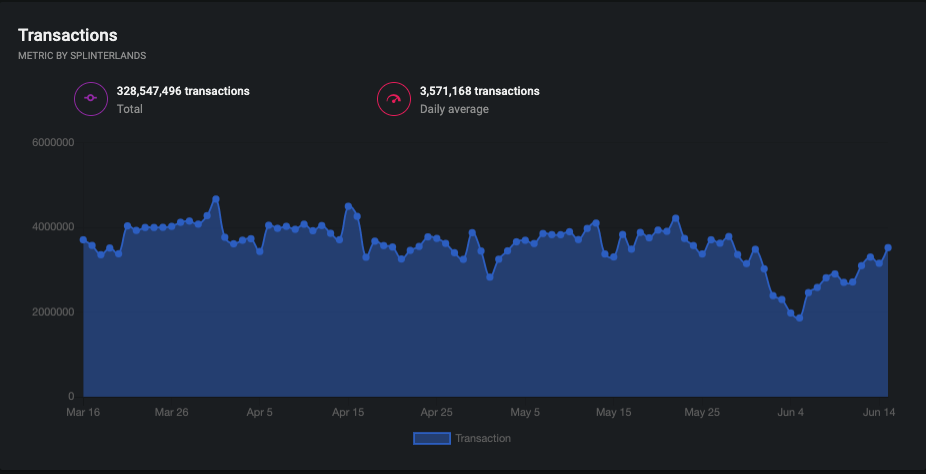 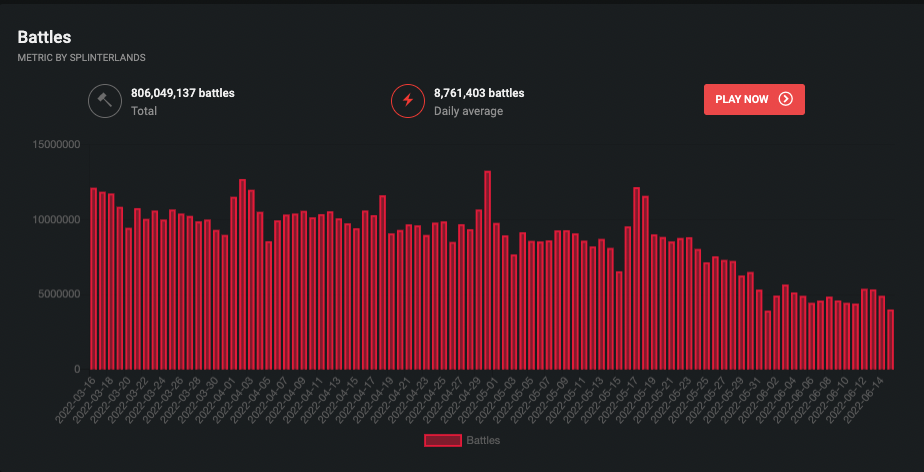 Games played are still in decline. Last day of the season still managed to have the least amount of games. But it was ticking up for a few days.

I think everything is heading in the right direction in Splinterlands right now. Also, it's encouraging that the Fed came out and raised more than expected and stocks and crypto reacted positively. Are we seeing a break in the terrible sentiment? Maybe.

This would make sense as a bottom on a lot of charts and no one is expecting a bottom here. Like freaking no one at all. Plus a lot of people just got liquidated. Markets like to liquidate people who are unprepared and then head right back up at the worst possible time.

Last interesting note. End of season numbers seem to be holding up. I expected them to have fallen by now but they barely have. Could this be the new floor? I was very skeptical at the beginning of this season as I had very poor results... But, as the season was coming to an end, I have earned more and more daily focus chests... So, the crucial part for rewards accumulation was the last 4-5 days of the season!
Regarding season rewards, I was playing the same way as I was doing before the rules changed, and I have finished in the same, Diamond 1 league as before, but with 9 chests more... Of course, the contents of the chests were much better than with old rules...

You're certainly not alone. Many people were skeptical in the beginning. I figured it would take a few seasons for people to figure out what league they needed to be in. Glad it worked out for you overall.

24 chests per day was so much more fun than what it used to be in bronze and silver and it pained me a bit to not have opening all those chests to look forward to in those last few days, but I think I'm still managing to do better renting those cards out than I was playing with them.

Thanks for the curate. I'm checking out some of the other posts on your list now.

Entry level gets even higher than it was and with this this new reward system too. Nevertheless, everyone started last season with some skepticism. Let's say, these skepticism are being replaced with satisfaction especially for people who put in the time and also have skin in the game. Overall, splinterlands is heading in the right direction. 144k.DEC is Sweet I must say.