I figure a change of topic is in order for today. I've dedicated plenty of posts over the last few weeks to Uniswap, Ethereum, WHIVE, WLEO and so on, as have many other people.

I have hit a dilema with my Splinterlands experience. Over the last number of seasons, I have consistently been hitting Champion 1 league. I bought cards strategically, maxed a couple of legendary summoners, and sat comfortably in Champion, sneaking in to Champ 1 each season briefly before getting a smackdown from the bigwigs. 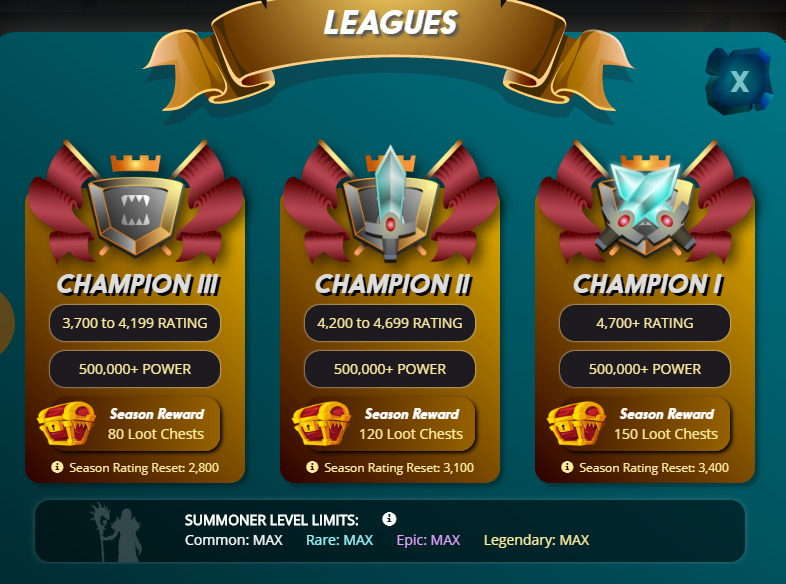 But I can't do that any more.

My deck isn't big enough to qualify for Champion any more - I was about 50,000 Power points short. This has caused me to rethink my investment in the game, and consider whether I wanted to spend more money to return to Champion, or not. With my current priorities being elswhere, and considering myself overall as a casual player of the game - I log in, do my daily challenge, may play some extra games on my mobile if I'm bored - I've decided that personally, now is not the time to put more money in.

The next question is whether to sell down some of my deck, if I'm not going to pursue glory by spending to get into Champion. Are the cards of themselves a worthy stand alone investment, or would freeing up some of that for other priorities be wise?

I have chosen to list for sale (and burn some) cards to drop back to just enough to stay in Diamond 1. Most notably, I have listed my Legendary summoners for sale. I'll be happy enough to hang in Diamond 1 and stay as a casual player.

How are you handling the paywall?

I'm interested to here from others about how you are managing your Splinterlands experience these days. I always considered Money spent on Splinterlands as a form of "Investertainment" - part investment, part entertainment. But looking at it as purely an investment, do you see spending more on cards to level up worth it?

For me, I'm downgrading for now. No point putting a bunch more money in to climb over the paywall, because how far away is the next one. I've got other priorities for investment at the moment. I get that Splinterlands needs to make money, no argument there, and that bots reward farming is the target of this new cap system.

For what its worth, here is my $0.02 on what they could have done differently to curb the bot farms from gaining rewards disproportionate to the value of cards held.

Instead of the "power" system, why not scale the points awarded per day. A bot works its way up the leagues by playing games all the time - gaining points over time and moving to ranks beyond the level their cards justify. If the points rewarded scaled back after a certain number of matches each day (say 25 as a number frfom thin air).

For example. The first 25 matches each day reward points as they do now. After that, the points gained for a win reduce, eventually to only 1 point each win. The points earned for a loss increase, so that a bot that looses its 150th match of the day could lose 100 points in one hit. This would greatly disincentivise bot operators from running 24/7, as they would be heavily punished on thew table for loses. Human players would benefit, without requiring draconian paywall solutions. The balance of the game would skew a little back in the favour of skilled human players, which is where it should be.

Anyway, what do you think?

Have Splinterlands shot themselves in the foot with this move, or was it essential for the long term economics of the game? Are you buying or selling? Am I wrong in my decision to not pursue Champ level?

Darn I was hoping your title was sarcastic

I don't know what to make of Splinterlands now so I will keep playing as is for now and see how it goes.🤔

Yeah I'm still playing, but personally holding of buying more, and selling a bit to reduce my investment till I see what comes of these changes.