Keen followers of the LeoFinance community will know that a few of us have taken an interest in the Thorchain project, and its token Rune. For those that haven't heard of it, here are a couple of my recent posts about it. Anyway, tonight I sent out a cheeky tweet to the Thorchain team, who have had a really busy weekend recovering from a white hat finding a security flaw, shutting the chain down, patching, deloying and resuming operations, while keeping all funds safe and transparently communicating with the community. They haven't named this iteration of their project "Chaosnet" for nothing. So yeah, they were busy but they still took the time to respond to me.

Here is a screenshot of the tweet - and it's link 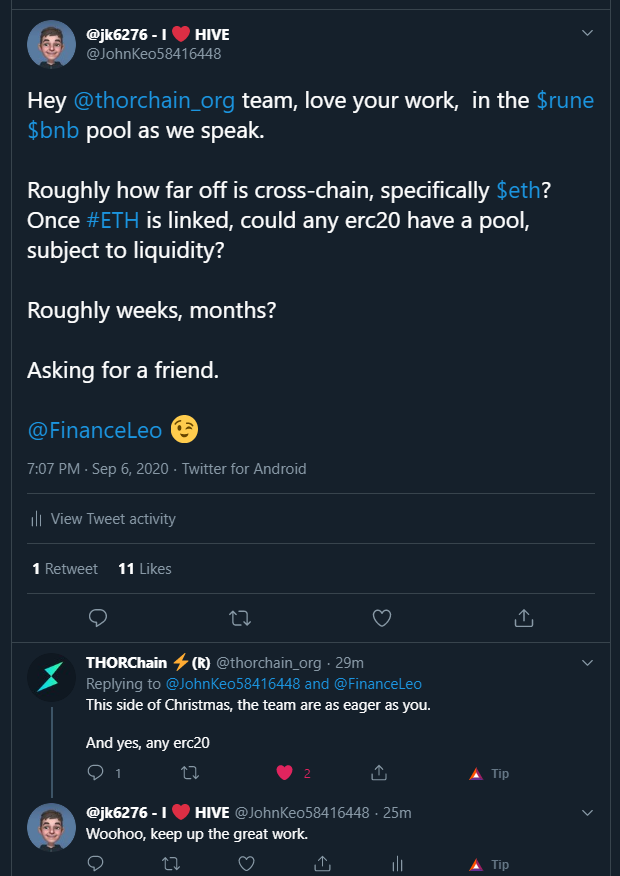 I know there would be some of us that would love to see a WLEO (an ERC20 token as referred to in the tweet) pool on Thorchain with RUNE. Something to work towards once the initial Uniswap pools are up and running.

The process to be included is community initiated - there is no application forms or listing rules to follow - Thorchain is a DEX. All it takes is for assets to be staked. Initially a pool will be in standby mode - not earning fees or RUNE rewards, but open for deposits. At regular intervals, the Thorchain churns its nodes, and adds the standby pools with the biggest liquidity onto the active list. The community can make this happen, we don't need to ask for a listing, we just go earn it once it is possible.

As you can see from the tweet, Thorchain will be linked to ETH this year. Once it is, any ERC20 token (including WLEO) can be added as a pair with Rune. This is just another example of how powerful it will be for LEO to have a successful launch and build up of WLEO - first on Uniswap, and then wherever we want it to go.

You know I tweeted this one out

Think Uniswap - but not on Eth so much smaller fees, and cross chain (soon anyway, for now its linked to Binance chain while it scales up, but ETH is probably next), using native assets (not wrapped). All pools contain RUNE, and it is also a reward for LP's and the nodes running the network.

I'm thinking here about the wrapped leo only because native support from Thorchain for Hive may take a while, if their is any support in the Hive community, whereas I think WLEO may have a much better shot. Once the ETH link is alive, it would just take a community push.

I'd really suggest more reading, its quite a project IMHO.

I saw your twitter convo with their team and I love this idea. I've been buying RUNE on the recent dip and this gives me even more incentive to load my bags for a future wLEO-RUNE liquidity pool.

This goes back to an idea that I am trying to push around the community as the excitement around the wLEO Uniswap listing heats up: please think of wLEO as a long-term project and value-add to the LeoFinance ecosystem as opposed to some short-term, greed-driven way to make a few dollars.

wLEO opens us up to a whole new universe of collaboration with other blockchains, Ethereum dApps and communities.

LEO is our Hive-based rewards token and the Hive blockchain has incredible social and transaction features (free and 3 second txs) that are essential. If we successfully merge the idea of having a Hive-based rewards token coinciding with an Ethereum-based financial token, we can take the LeoFinance project to greater heights as we collaborate and find value in other dApps/blockchains like Thorchain.

I'm going to continue my research/buying of RUNE. Keep us updated with their progress too! I love what they're doing so far.