Fred always has an excuse for not investing in Bitcoin, don't be like Fred

Rewind the clock back to 2010, Fred was an avid stock and options trader trading mostly for his own account.

He also liked to stack gold and considered Peter Schiff a good figure to follow.

He had CNBC on all day long and often hung out in stock related chat groups and message boards staying up to date on all the latest happenings.

He hears bitcoin mentioned a few times and thinks it sounds like a somewhat interesting idea.

A currency for the internet not controlled by any single entity.

However, upon looking into it more it soon becomes overwhelming and Fred decides this thing is just way too difficult to understand for him to really get involved with it. 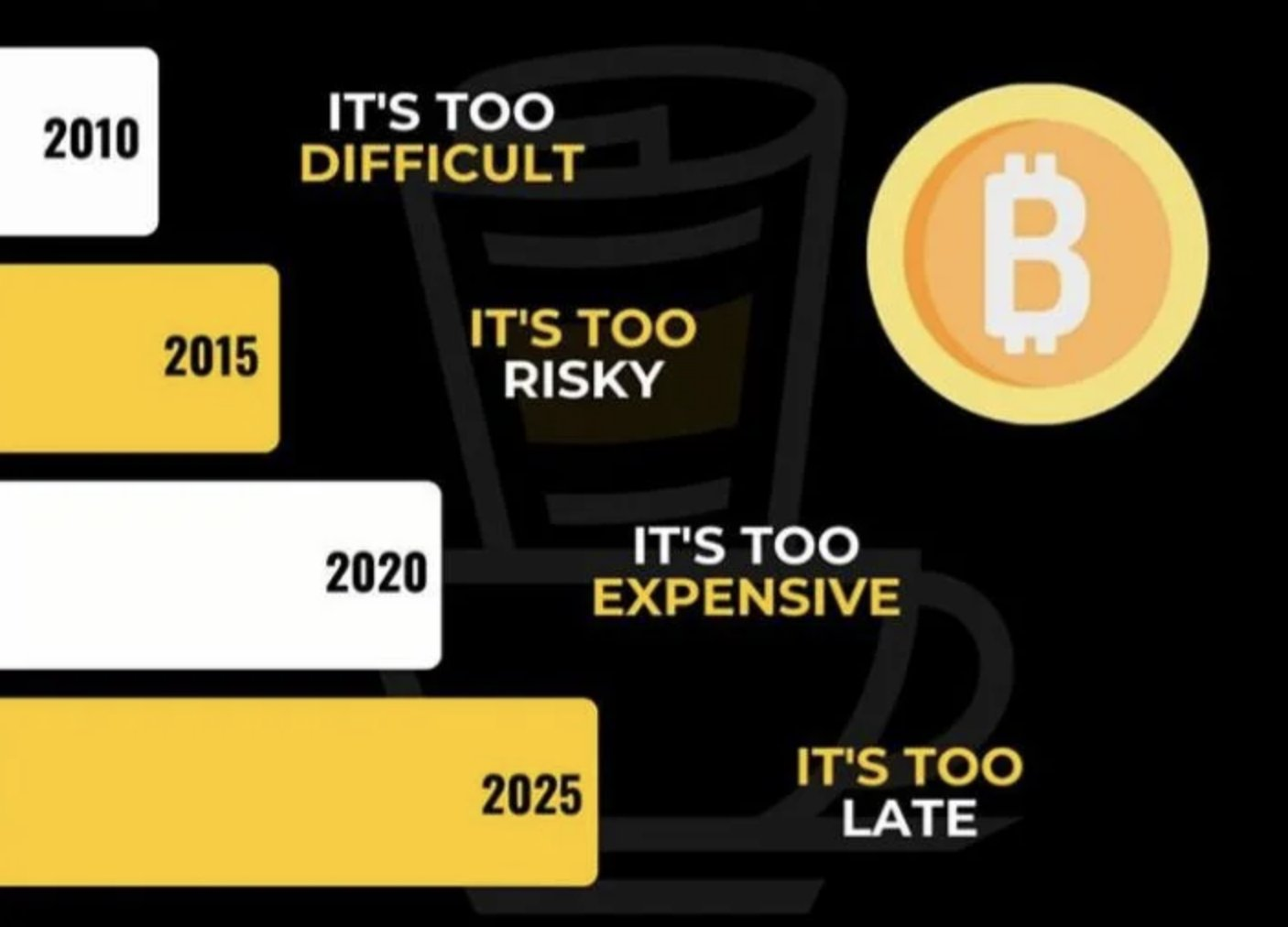 Jump ahead to 2015 and Fred has heard quite a bit about bitcoin over the last 5 years.

He understands it much better now, but he still is not sold on the idea of investing in it.

Fred hears a lot of stuff about how bitcoin is the currency of the dark web and the black market and how the only people that use it are criminals.

Combine that with the fact that he was watched first hand how the price can run up thousands of percent only to come crashing back to earth and decline by almost 90%.

Moves that would give even the staunchiest stock traders shivers.

For these reasons, Fred decides bitcoin is just too risky from a regulatory perspective as well as from a volatility perspective.

Unfortunately for Fred, is fears were mostly unwarranted.

We fast forward to 2020 and Fred has now watched 3 boom cycles unfold where the price of bitcoin has gone up many multiples from where it bottomed.

By this time it has become clear that most criminals don't actually prefer using bitcoin as there are much better privacy options out there for them.

The regulatory uncertainty is still there, but it has diminished greatly.

The price is yet again 10x off the lows from where it bottomed just a couple years prior.

At this point Fred feels much better about investing in bitcoin from a lot of perspectives.

He understands it, he is more comfortable with the risk, but now unfortunately it is much much higher in price.

And one thing Fred makes sure of, he never buys the tops.

So, he decides he is going to wait...

Fast forward to 2025 and bitcoin has now seen 4 boom and bust cycles, each one going significantly higher than the last one.

Unfortunately for Fred and those like him, the dips never quite play out like he expects them too.

They don't go low enough for him to feel good about entering, after all it's tough to buy something down 80% from its highs.

Then the rips, well they go so high that Fred doesn't feel comfortable buying into the rally because you know, Fred never buys the top.

Fred continues to sit on the sidelines and watch many of his less informed friends just buy BTC and HODL make more and more money than he has made in his entire trading career.

Fred eventually gives up trading and decides he is going to buy gold because that will be the next bitcoin.

Peter Schiff and Fred are the only two people left in their trading group and eventually they end up thinking about selling all their gold and buying altcoins.

Hehe this was a good read. There are a lot of Fred minded people, and not only in regards to the Bitcoin

Yep most of my friends and family could be called Fred as well.

Hahah, we all know a Fred in our lives lol.

Congratulations @jrcornel! You have completed the following achievement on the Hive blockchain and have been rewarded with new badge(s) :

The earliest I am still holding from is some bought in 2016.

That first image is so true.

This is such a powerful point because a lot of the people I help onboard to HIVE talk about....It being too hard, complicated etc...

I always try to tell them, now is the time to learn. Dive in and figure this stuff out now...Because there will come a time when like with Fred....It'll be too late!

It’s never too late.... there are always dips.

Yep, that is a great point. "If it were easy, everyone would already be doing it"